In 2011, I wrote this during the Jane Austen pilgrimage portion of my ’round the world trip:

By the time I return with my little sister in a year or two to participate in the Jane Austen Festival in Bath, ideally I’ll have filled the whole map in and we can knock out a majority of the remaining sites together.

So it definitely took more than a year or two to bring this bucket list item to life, but finally, little sis and I traveled to Bath for the Jane Austen Festival – fully costumed, of course, and with The Jet Sisters‘ twist. 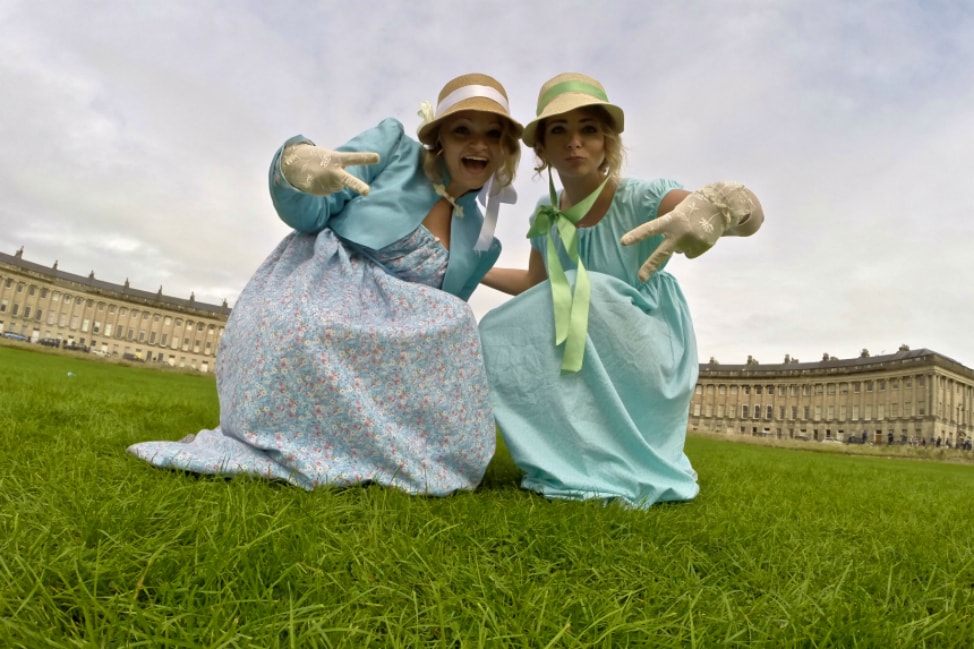 Newer readers may be wondering what in the world I was doing on a Jane Austen pilgrimage in the first place, so here’s the backstory. I was sort of, peripherally, semi dating an English bloke I met while traveling, and he quickly showed himself to be more Wickham than Darcy, if you catch my drift. Being the sensitive lass that I am, and having been traveling alone for months at that point, I went into a bit of a solitary, mid-trip funk.

To haul myself out of my rain-soaked despair, I turned to my clever friend Jane Austen and her cast of romantically challenged heroines for solace you can really only get in a good book. As I reread Pride & Prejudice, Sense & Sensibility and Emma, devoured Mansfield Park, Persuasion, Lady Susan and Northanger Abbey for the first time, listened to the 2005 Pride & Prejudice soundtrack on repeat and wandered the very English countryside where Jane’s lovelorn dramas played out, I discovered that much like friendship, sometimes a storybook sojourn is the finest balm for the pangs of disappointed love.

During my original pilgrimage, I visited the Jane Austen House Museum in Chawton, and Winchester Cathedral, where Jane is buried, and as much as I was inspired by both sites, it was the immaculate city of Bath that wooed me most of all. 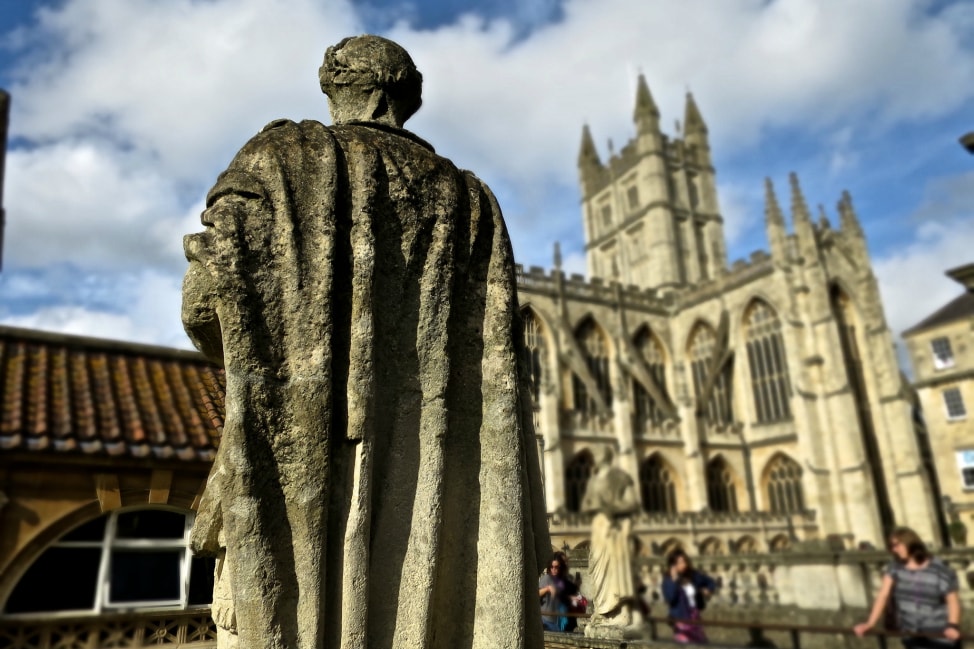 Though modern Bath is the heart of all things Austenian, Jane was hardly the city’s biggest fan. Bath in Jane’s day was all about social functions, finding a suitable husband and “taking the waters” for one’s health, so in 5 years as a resident, she grew weary of the forced conversation and social hoop jumping ladies had to suffer through. Editor’s note: She sounds like a closeted introvert, doesn’t she? Is it possible to have a posthumous BFF?

Fortunately for us, Jane’s disdain for the frivolous lead to her distinctive snark, and we undoubtedly have Bath’s high society to thank for some of her most ridiculous characters. 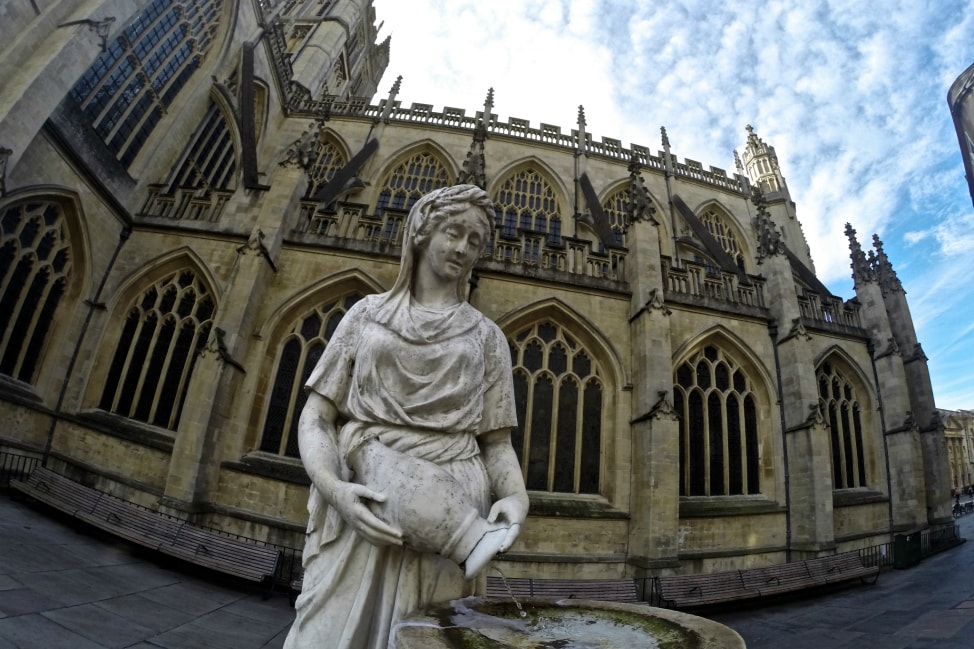 One of my favorite parts of Bath is that it retains so much of its character from Jane’s time. In her day, Jane wandered the Gravel Walk, crossed Pulteney Bridge on the River Avon, danced in the Assembly Rooms, potentially ate at delicious Sally Lunn’s and frolicked at the Royal Crescent.

Rachel and I did our best to do the same!

To kick off the 10-day festival, Rachel and I donned our Regency attire and joined the multitude of Janeites at the world famous Grand Regency Costumed Promenade, a procession of hundreds of costumed revelers marching through the historic streets of Bath. In 2014, they received the Guinness World Record for “the largest gathering of people dressed in Regency costumes.” (Curious about what to wear? Check out my guide on What to Wear to the Jane Austen Festival.) 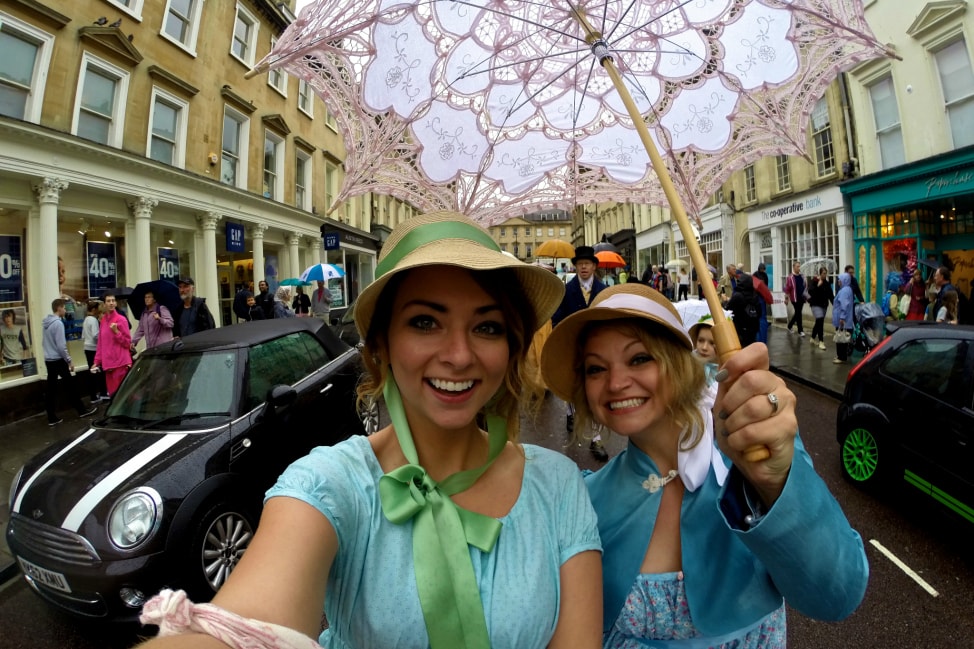 Bath was never more aptly named than on the day of the Promenade, because by the end of the walk, we looked as though we’d had a bath of our own! It rained for the duration of the 90-minute jaunt around town, which began at the historic Assembly Rooms and passed the Pump Room, Roman Baths, the Circus, the Gravel Walk, Georgian Gardens and the Royal Crescent. I actually had to hand wash our dresses before the Middleton Country Dance later that day – um, this is why I need a lady’s maid!

Several hundred costumed folks participated in the Promenade despite the dreary weather, and many hundreds more watched curiously from the sidewalk. Caroline Bingley would’ve been appalled at our petticoats, which were truly six inches deep in mud, but we loved every minute of it!

*There are tons of literary festivals around the world if you’re into books but not necessarily Jane! 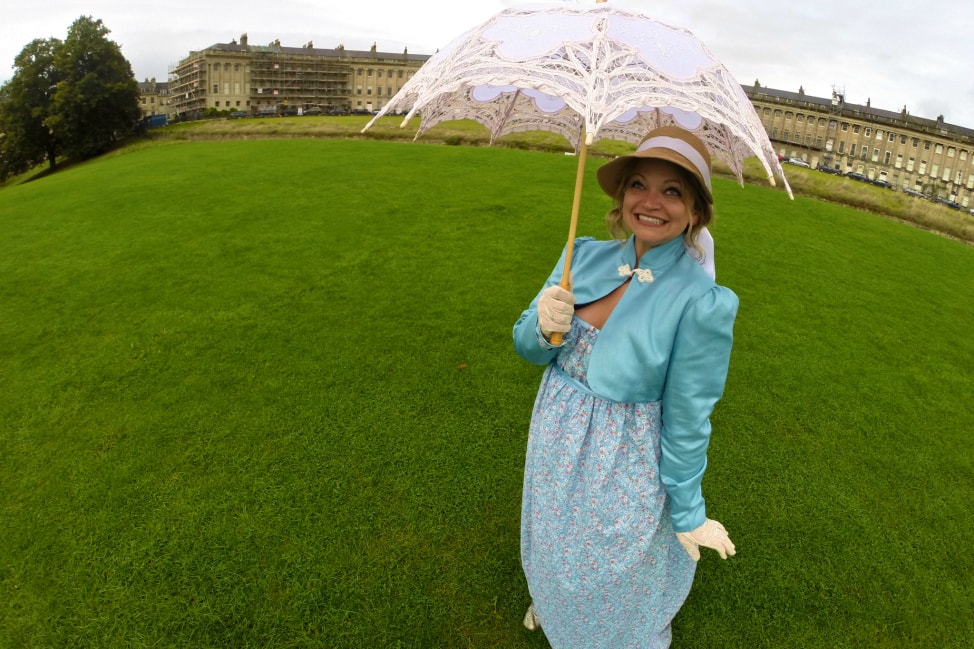 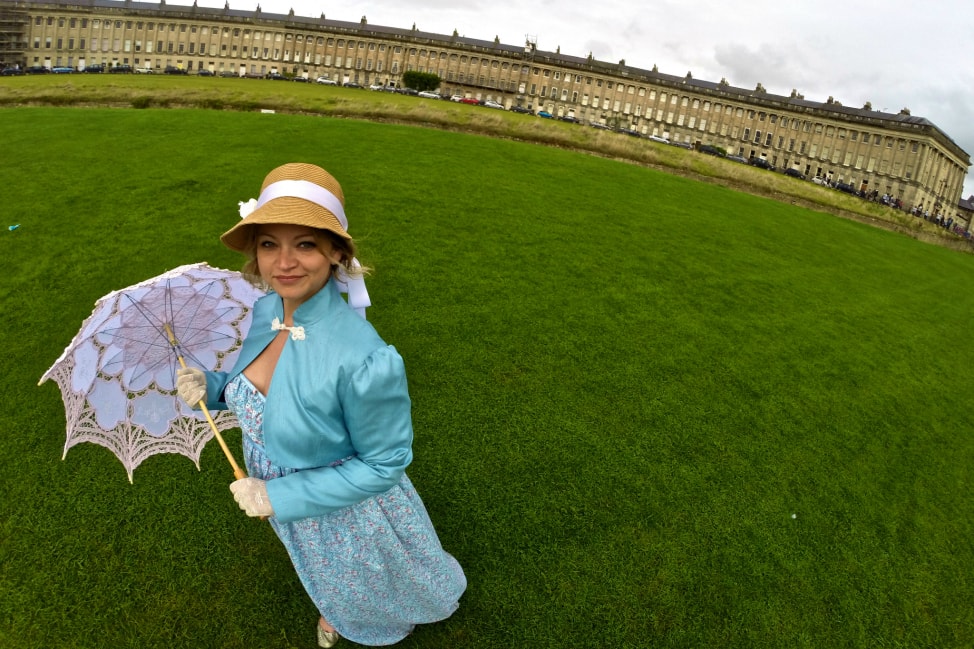 Pro tip: parasols, while delicate and lacy, don’t serve you quite as well as say, a large golf umbrella. But we were dedicated to historical accuracy in our Regency ensembles! (Except in our shoes… I firmly believe Jane Austen would’ve approved of our Tieks.)

It may have taken years to get to the Jane Austen Festival, but it was well worth the wait. I suspect we’ll be back again.

There’s a masked ball I need to attend.

My trip was in partnership with Visit Britain. All #OMGB moments, opinions and wardrobe malfunctions are my own. Special thanks to Visit Bath and the Jane Austen Festival for making this Janeite’s dreams come true. Images on this page are copyrighted and may not be used without written permission.

8 thoughts on “The Jane Austen Festival in Bath, A Must-Do for All Janeites”