Having done what I came to do in London (i.e. seeing Harry Potter & The Deathly Hallows, Part 2), I began my encounter with Jane Austen in the county of Hampshire and the town of Winchester, about an hour by bus from London’s Victoria Station. To my dismay (considering it was supposed to be the middle of summer), when I arrived it was dumping rain and shivering cold. It was actually perfect for my jilted, mopey mood and I soaked up the gloom while listening to the entire Adele songbook, Counting Crows Colorblind & Death Cab for Cutie on my iPhone. 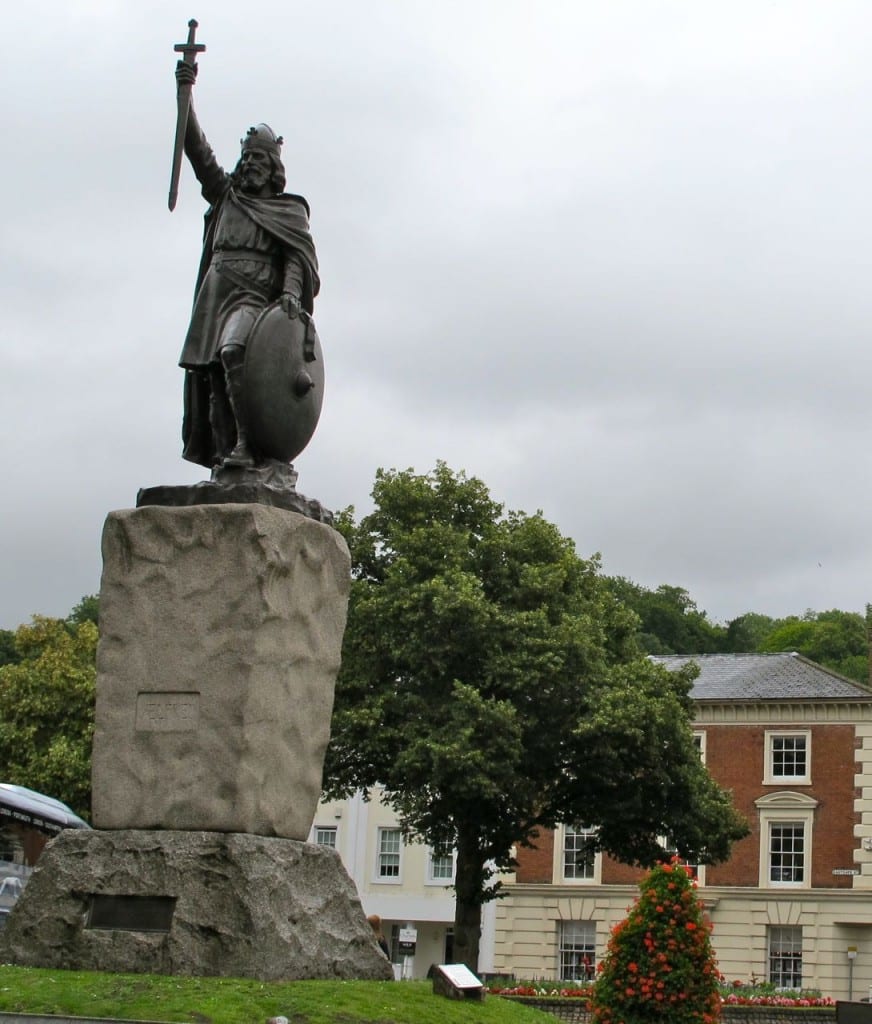 King Alfred welcomes you to Winchester

Winchester has been around for ages – since the Iron Age, actually. In Roman times, it was known as Venta Belgarum and once served as the capital of England. 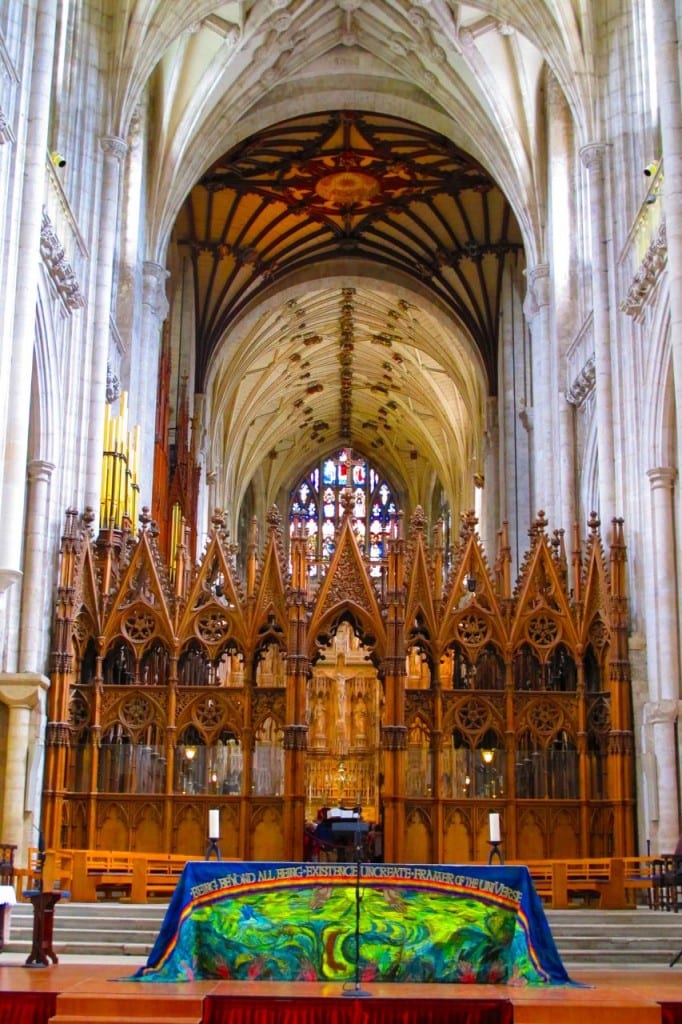 The longest cathedral in Europe – Winchester Cathedral. Built in 1079.

Today’s main attractions are the Gothic Winchester Cathedral, one of the largest in Europe; King Arthur’s Round Table (sort of), which has hung in in Winchester Castle’s Great Hall since 1463; and the ruins of Wolvesey Castle & Palace, where Mary Tudor and Philip II of Spain were guests just before their wedding in the 16th century. 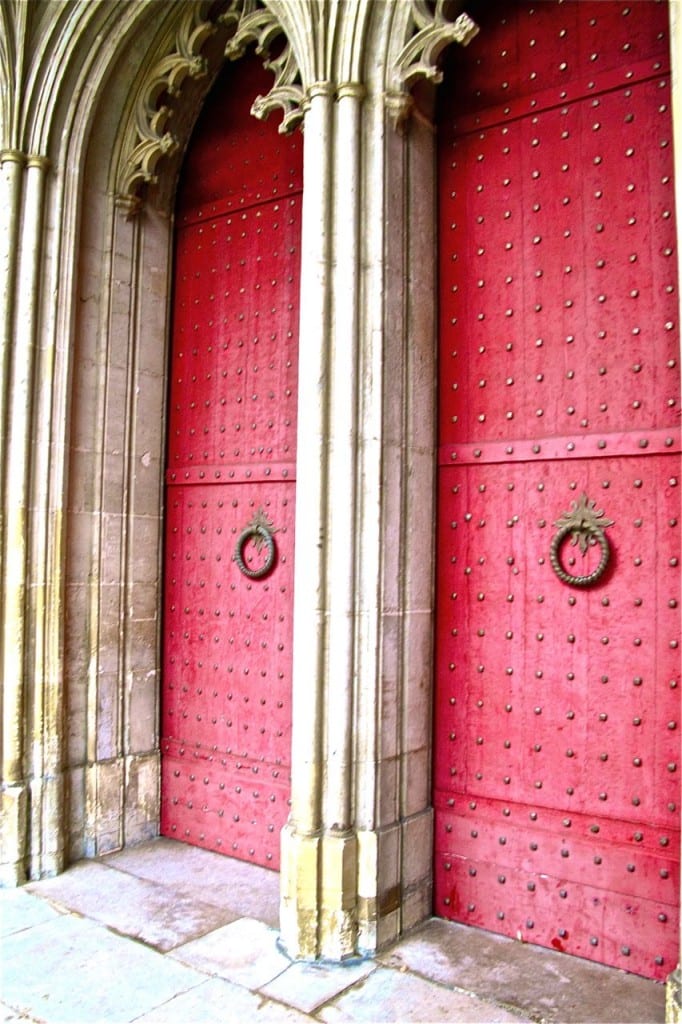 I checked out all the main attractions, but only after paying a visit to a few important sites along my Austen pilgrimage route. First stop – the house where Jane died. In 1817, at the age of 41, Jane fell sick with a mystery illness and after a few weeks, was convinced to move to a house on College Street in town to be near her physician. And just like that, she died in the arms of her devoted sister Cassandra. Only four people attended her funeral. 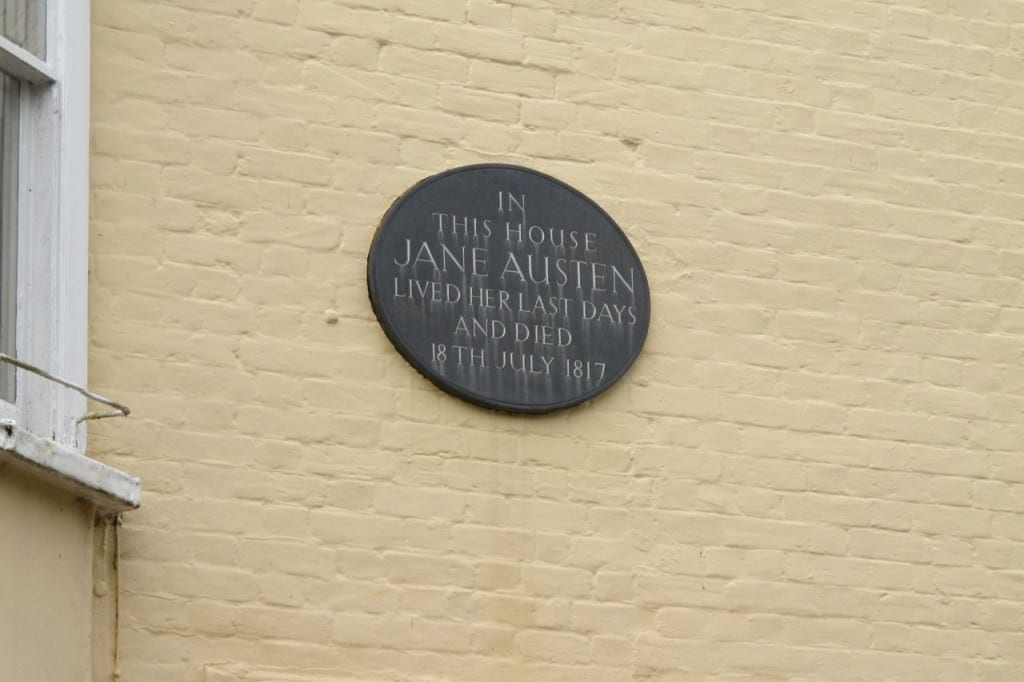 Once I saw the house (you can’t go inside as it’s a private home – you can only view the above plaque), I made my way just across the street to Winchester Cathedral for some solemn reflection at Jane’s grave. A torrential downpour drove me sopping wet into to cavernous church, where even the stained glass windows were darkened by the dismal weather. 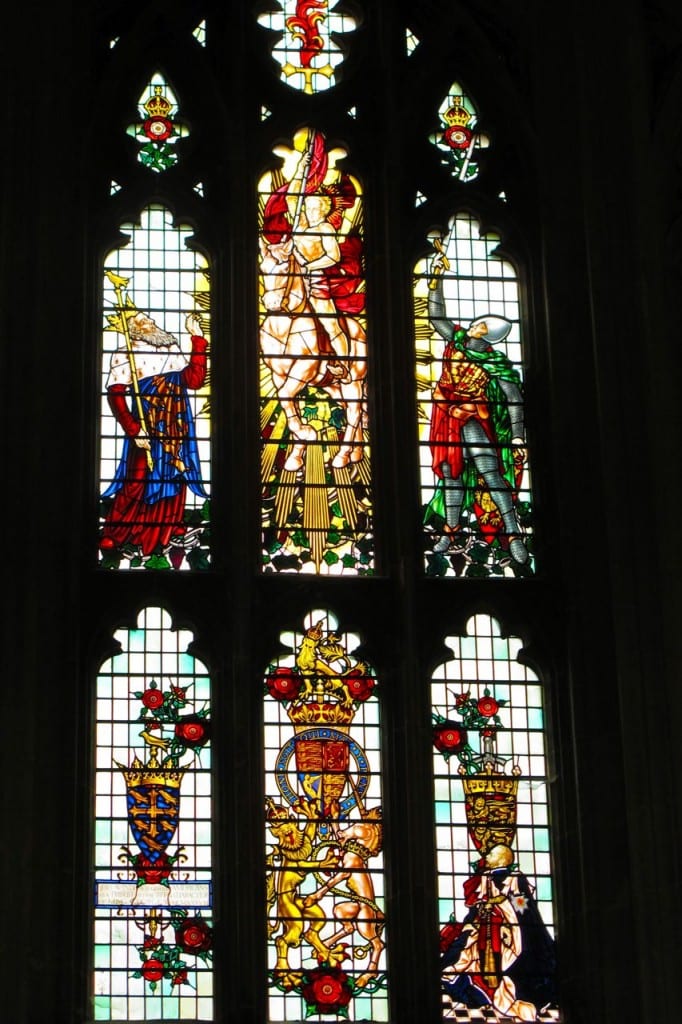 The Jane Austen window, added in 1900

The stone over Jane’s grave neglects to mention her literary achievements, as her fame only began to reach manic levels after her death. A brass plaque was added in 1872 at the request of her nephew to address her notoriety. The original stone simply references her status as the daughter of Revd. George Austen who once was the rector of nearby Steventon, and the “benevolence of her heart, the sweetness of her temper, and the extraordinary endowments of her mind.”

If you didn’t already know about Jane, you might glance at her grave without another thought, as you might in any cathedral full of deceased former local residents and church members. 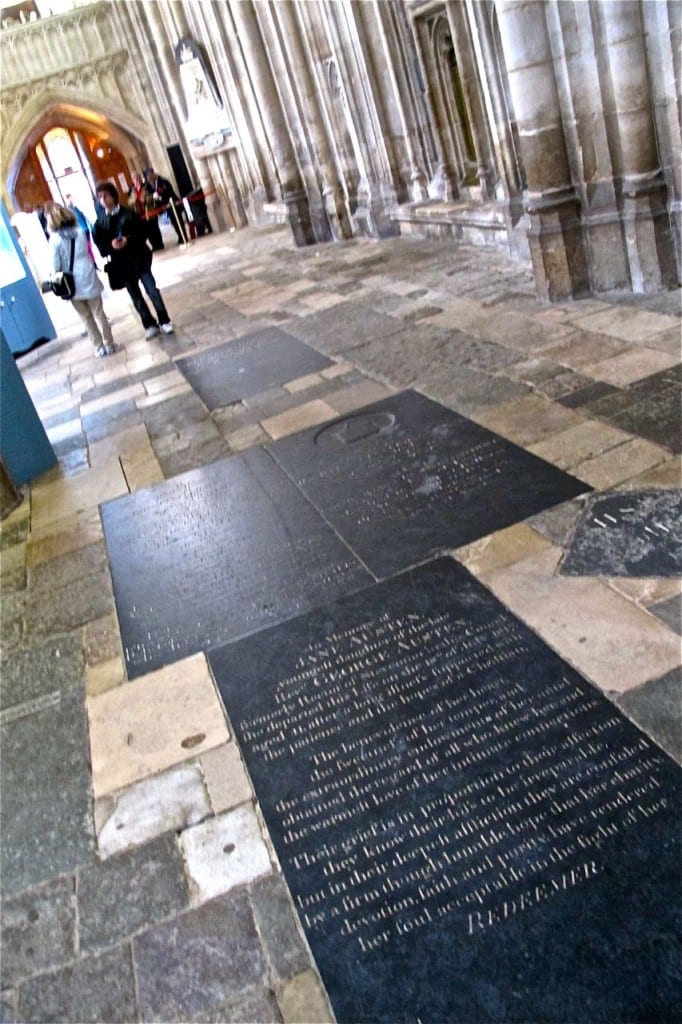 I sat cross-legged on the cold stone floor in front of her tomb for a long time, just thinking. The rain was pounding on the vaulted roof; there was a thunderous echo throughout the cathedral. There weren’t many others inside, and those that I had passed on the way in were either viewing the Winchester Bible exhibit far at the other end or quietly reflecting in a nave elsewhere.

I don’t know how long I was there, but I felt like I had Jane all to myself. 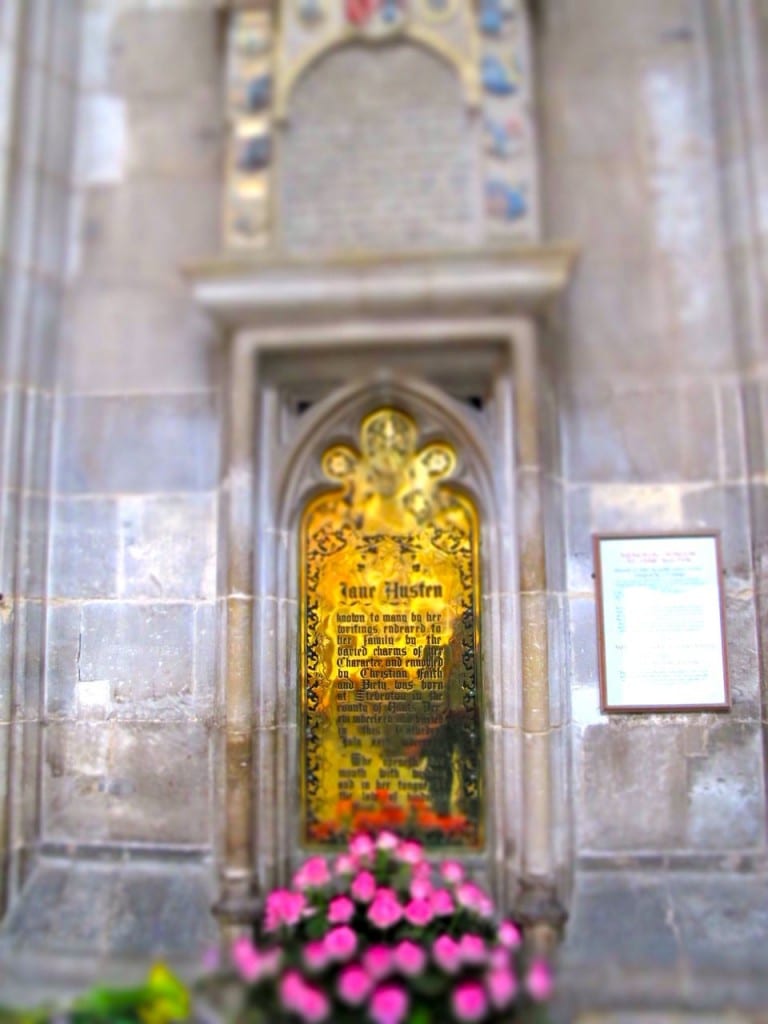 What must it have been like to be Jane, in a society where a lady’s only mission was to marry and marry well? How brave she was to write her stories. Though they seem light and fluffy and silly and girly, they offer a discretely biting social commentary from a woman’s perspective – something lacking in the early 1800s.

I can only imagine the real life characters she must’ve run into in her circle of landed gentry in Hampshire. Certainly there had to be some bawdy, over-the-top women to inspire the likes of Lady Susan and Mrs. Bennet and of course, some rogue English cads to serve as models for Wickham, Willoughby and Henry Crawford. 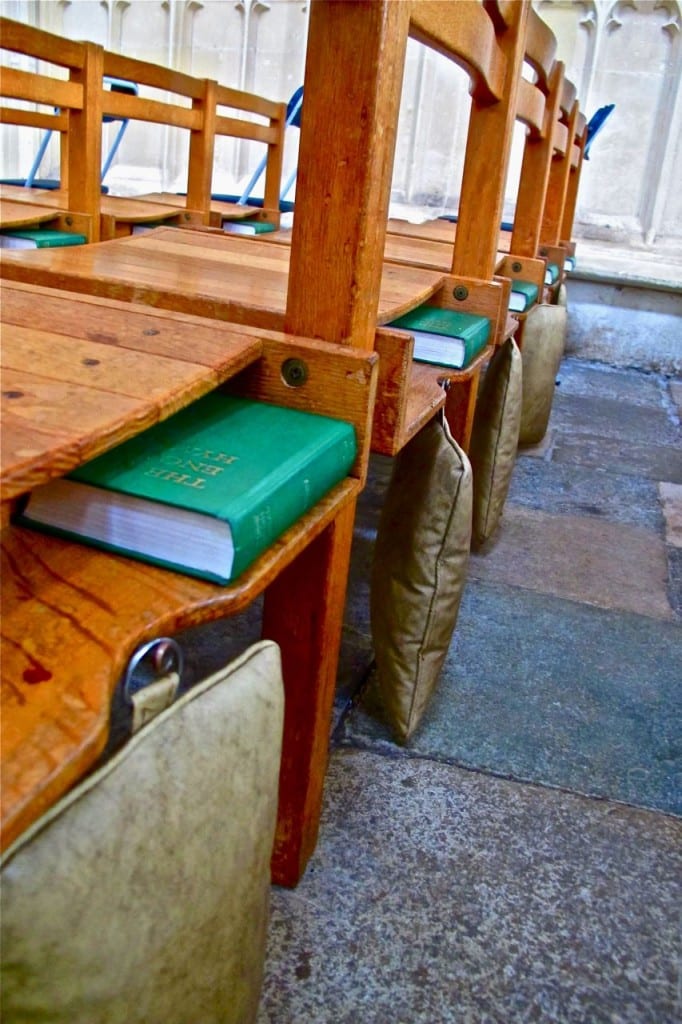 The pews & hymnals at Winchester Cathedral

Only after I’d been there contemplating my personal dramas and Jane’s life, characters and impact for who-knows-how-long did I make a very peculiar and surprising connection.

Maybe it was a sign from beyond. Maybe it was just a freaky coincidence. All I know is that a week before I arrived at Jane’s grave, I was in Spain feeling like a homeless, adrift prize idiot. The idea to go on an Austen pilgrimage came to me out of the blue and immediately seemed like the perfect, obvious choice. And then there I was, a week later, 194 years to the date of her death, paying my respects in person. It certainly seemed like I was finally in the right place at the right time.

There will be little rubs and disappointments everywhere, and we are all apt to expect too much; but then, if one scheme of happiness fails, human nature turns to another; if the first calculation is wrong, we make a second better: we find comfort somewhere.

When visiting Winchester, I stayed at the adorable & cozy Little Mead Bed & Breakfast in Sparsholt, about 15 minutes outside town by car or around 45 minutes on the bus. Mr. & Mrs. Lang will cook you a hearty English breakfast, tell you all about the area and make sure you are comfy and toasty in your room. Definitely recommended!

5 thoughts on “Coincidence or Providence in Winchester, England”