We all have our travel heroes, don’t we?

Those fearless wanderers who charted the untrodden path, blazing a trail for the backpackers and bloggers of today. The ones who encouraged us, however indirectly, to become wanderers ourselves. Someday I hope to write about how the Amelia Earharts, Captain Cooks, Marco Polos and Jack Kerouacs of the world have affected my personal journey, but in the meantime, there’s one ancient traveler who shaped my young mind more than just about any other, and I walked in his footsteps just a few weeks ago.

It’s Paul. Ya know, missionary Paul from the Bible. 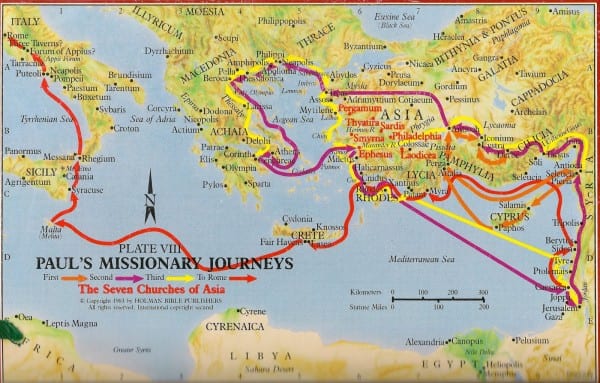 Paul rarely makes the list of most famous travel writers in history, but I think if he were around today, he’d be one of the biggest bloggers out there. Rather than prattling on about the unique, quaint, picturesque aspects of a new place, he wrote about each destination’s people and their challenges, along with the trials and tribulations he faced on his journeys. Shipwrecks and imprisonment & Ephesians, Philippians and Colossians, anyone?

(Lord knows – like, He actually knows – that Paul’s letters will always have a longer shelf life & impact than any post I could ever write. How humbling!)

After I spoke at TBEX Athens back in October, I had the chance to hop on the Louis Olympia (which is now rebranded as the Celestyal Olympia) for a 5-day cruise around the Aegean Sea. Ports of call included Mykonos and Santorini, where I spent heaps of time in 2011, and Rhodes, Crete, Patmos and Kusadasi, Turkey, all new destinations for me. It was the half-day stop in Kusadasi and an excursion to the ancient city of Ephesus that got me thinking about Paul, his missionary journeys and his impact on my wandering lifestyle.

I used to spend my Sunday school days flipping through the Bible, and though it may have earned me some undeserved brownie points, I wasn’t some theological wunderkind. To be honest, I was usually enthralled with the colorful maps in the back of the book, which always included Paul’s missionary journeys. While the class learned through flannel-graph about Moses and Noah and Jesus, I was daydreaming of far-off places like Egypt and Jerusalem and Ephesus, never really imagining they were real destinations I’d one day see for myself.

Clearly, Paul’s goal was not to become the No. 1 travel writer in the Roman Empire. He made his way to Ephesus in the 1st century AD to share the good news of Jesus’ resurrection with the Jewish population. He spent a little more than two years in the city, where he often feared for his life, was opposed publicly by the government leaders, went to jail for his beliefs and spent much time writing letters to neighboring communities. Many of those letters later became the New Testament. 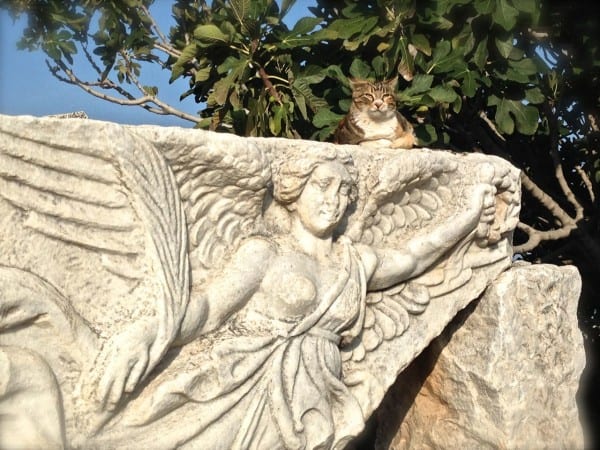 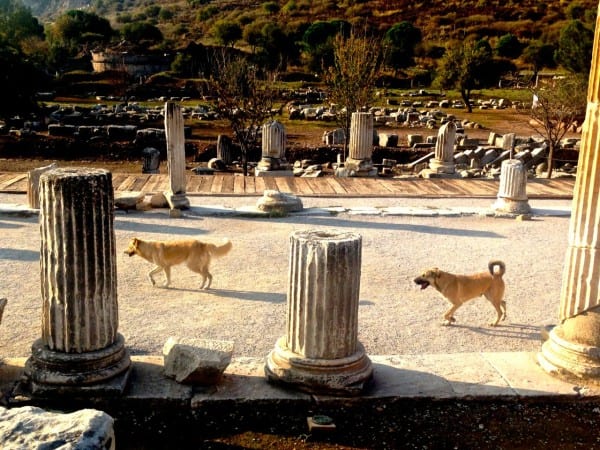 The city I saw was nothing like the bustling hub Paul would’ve experienced though. Like many of the Mediterranean’s ancient ruins, earthquakes, fires and wars have contributed to their eventual destruction and abandonment.

Today, once towering columns are quartered stumps. In place of centurions, stray dogs and cats stand guard. Somewhere under the rubble just outside the city, the Temple of Artemis, one of the original wonders of the world, lies in pieces. Once a port city with a thriving harbor, due to sediment collecting over the centuries, Ephesus is now 5 miles inland.

In a place that served as a distinguished city of art, commerce, religion and education, nothing remains but endless piles of unsolved mysteries, broken words and a few reconstructed facades. 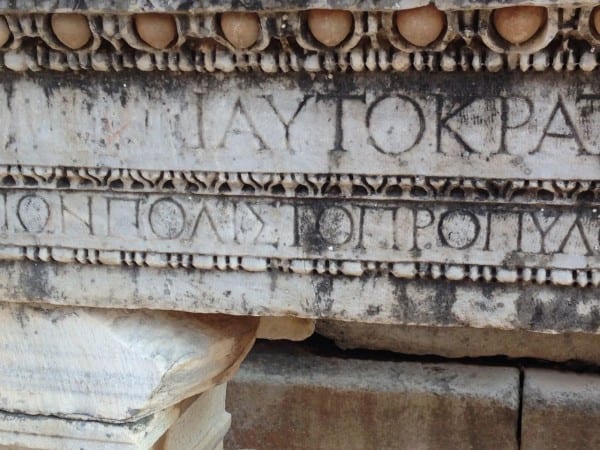 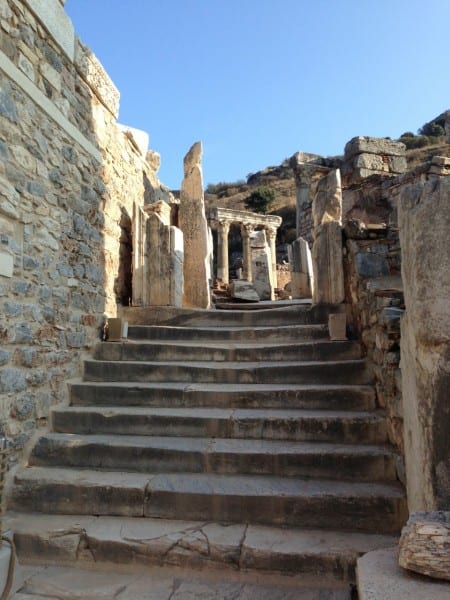 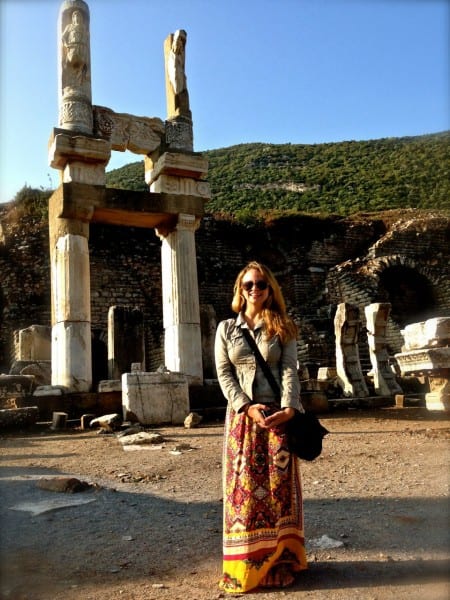 SIDE NOTE: While I thought Ephesus was well worth the visit, our next stop on the Louis Olympia was Patmos, which is believed the be the site where John received his revelation from God in a cave. The only revelation I received was that I should’ve skipped it. Perhaps on a cold winter day when cruise ships are out of season, the tiny cave would’ve felt a little more reverent; when filled beyond capacity with dozens of busloads of tourists, it was a place I’d rather exit than enjoy. 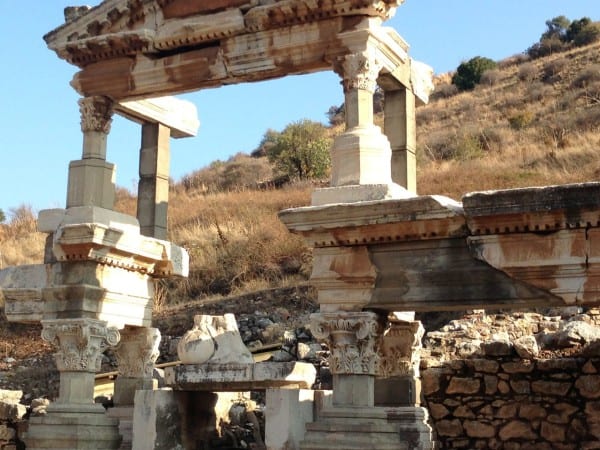 Ephesus was certainly crowded, but since it’s such a sprawling ancient city, it didn’t feel quite as stifling or hurried as Patmos. Everyone had room to spread out and explore at leisure.

Well, as leisurely as can be expected when one has a ship to catch… 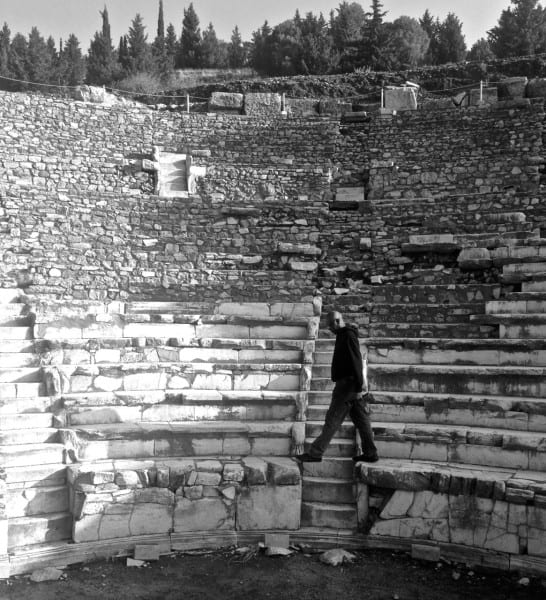 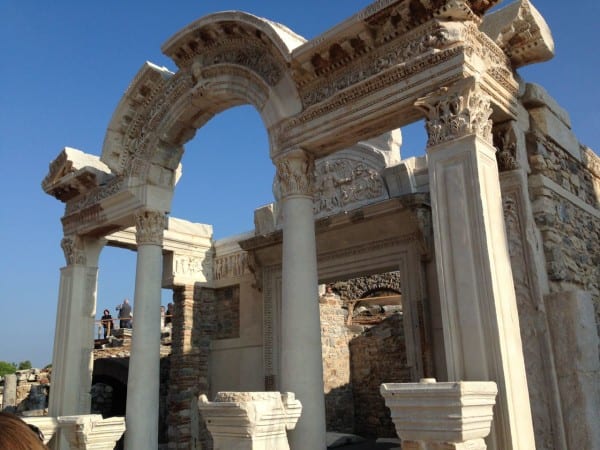 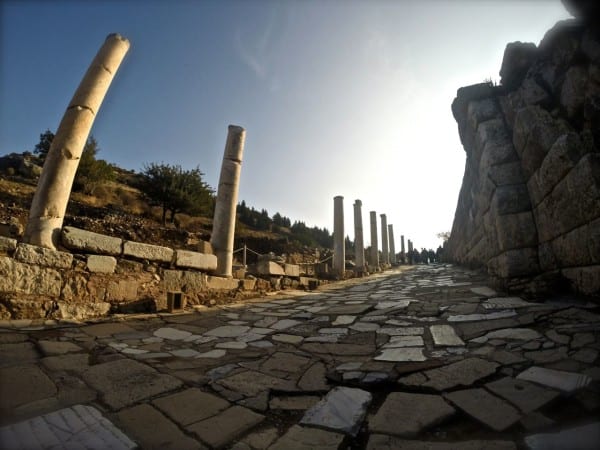 Fortunately, my visit to Ephesus was less eventful than Paul’s. No imprisonment or government shakedowns for this traveling, writing, sometime missionary. 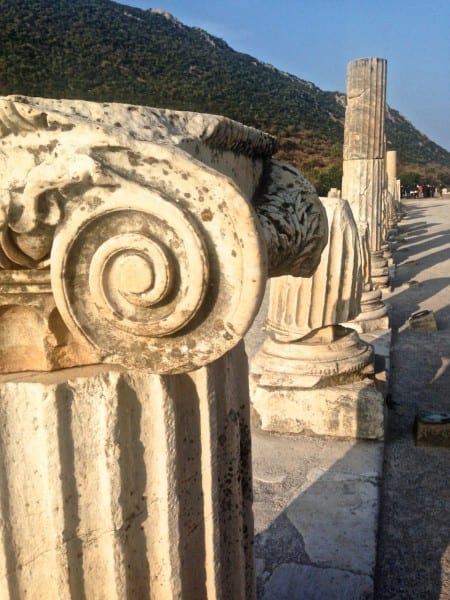 Have you been to Ephesus? Did you enjoy the ruins? How do you think they compare to others, like Volubilis in Morocco or Jerash in Jordan?

Read more: Using the Bible as a Travel Guide in Israel

5 thoughts on “Ephesus: In the Footsteps of Paul, an Original Master of Travel Writing”