While most people probably learn about Jordan because of the famous views of Petra, there’s a lot more to the country! Here’s all you need to know about visiting the incredibly underrated Jerash ruins.

You have to wonder if that’s how the impressive ancient Jerash ruins feel when compared to their celebrity big sister, the rose red city of Petra. I had two fantastic tour guides to lead me through Jerash, and I’d recommend going on a tour to make the most of the city. You can easily get a half-day or full-day tour from Amman or even the Dead Sea:

The History of the Archeological Site of Jerash

For 6,500 years or so Jerash has been occupied by the human race. Much of what we can see at the ruins today comes from the Greco-Roman period. This is when the city served as a bustling trading post between Europe, the Middle East, and Asia. It also was apart of the Decapolis, a group of 10 influential cities that made up the Roman Empire’s eastern border.

So what caused this bustling trading post to decline? The Persians invaded in AD 614 and a major earthquake in AD 749 contributed to the demise of the city, though it never died out completely. During the Crusades, some monuments, like the Temple of Artemis, were converted to fortresses.

Jerash Today — NOT a UNESCO Site

Why do you suppose Jerash, with its well-preserved arches and columns, is a bit of a sleeper on the ruins circuit?

I’d never heard of it until I saw it listed on my Jordan road trip itinerary. Yet Jerash is often called the “Pompeii of the Middle East,” referring to its size, extent of excavation, and level of preservation. Similarities with Italy’s Pompeii stop there. While several earthquakes have ravaged Jerash over the years, it’s never been buried by a volcano.

According to my guide Ibrahim, part of the reason Jerash is still Jordan’s best kept secret is that it’s not yet a UNESCO heritage site. Of course everyone thinks it should be, and the historic and cultural goods are all there to make it so, it’s just that when certain buildings were reconstructed, the reconstructors didn’t always follow the UNESCO guidelines.

So for the time being, it seems that Jerash is on the waiting list. 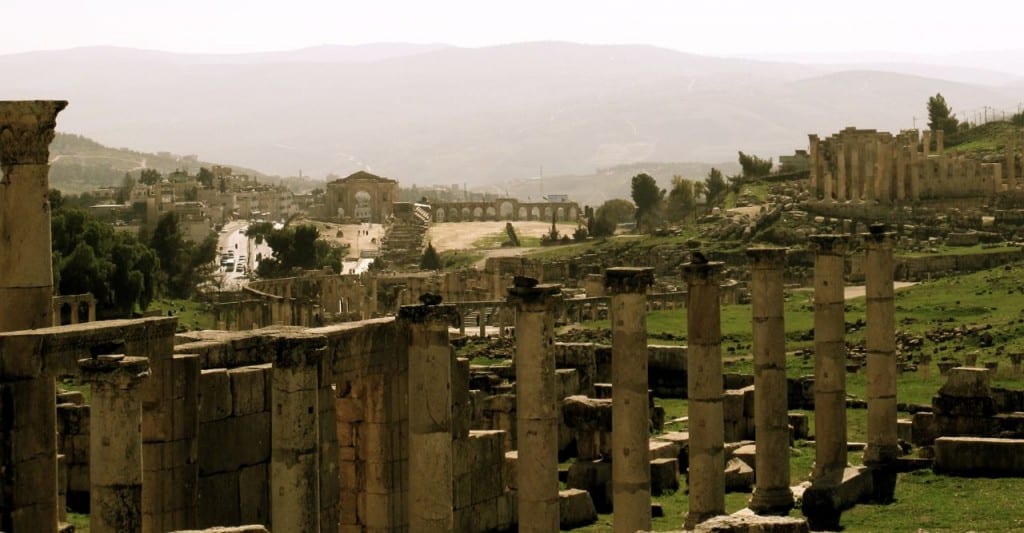 Jerash in the Bible

While you might not find the name “Jerash” in the bible, you will find mentions of the city of Gerasa throughout the New Testament as part of the Decapolis. This is another name for Jerash. You can see it named in Mark 5:1, Luke 8:26, Matthew 4:25, and Mark 5:20.

My Trip to the Jerash Ruins

Only thirty miles north of modern capital Amman, Jerash served as the 2nd stop on my Jordan road trip. As Rami whipped his black SUV around corners on the way from the Citadel to Jerash, we came to a crossing. We could continue on our merry way, or detour to Syria, Iraq, or Iran.

So, yeah. I decided to stick with the plan and head straight for Jerash.

I’d rather face the ghosts of Rome than any of those borders right about now.

When I visited Jerash in February, there may have been about a dozen other visitors, spread over the 800,000 square yards of ruins. It was quiet enough that I nearly had the space to myself, and could stop to reflect on what Jerash might’ve sounded like 2,000 years ago when Roman carts rolled over the stone streets, plays were performed in the two theaters and Hadrian came to visit with all the pomp and circumstance you’d expect from the emperor’s arrival.

Jerash is truly a ruin that’s not so ruined. You can still walk the same streets and sit on the same benches that Roman citizens did – something that always amazes me.

The buildings here are preserved well enough that you can picture the town as it once was with very little imagination.

As I mentioned to more than one Jordanian during my road trip, if someone would just give me a shovel and enough hummus to sustain me, I’d be happy to live out my days excavating ruins like Jerash and Petra. The sheer number of monuments, homes, churches, colonnades, theaters, and who-knows-what-else that lie beneath the sand boggle my mind.

Can you imagine what else we might learn about world history if only there were enough funding to keep on digging?

A Guide to the Jerash Ruins 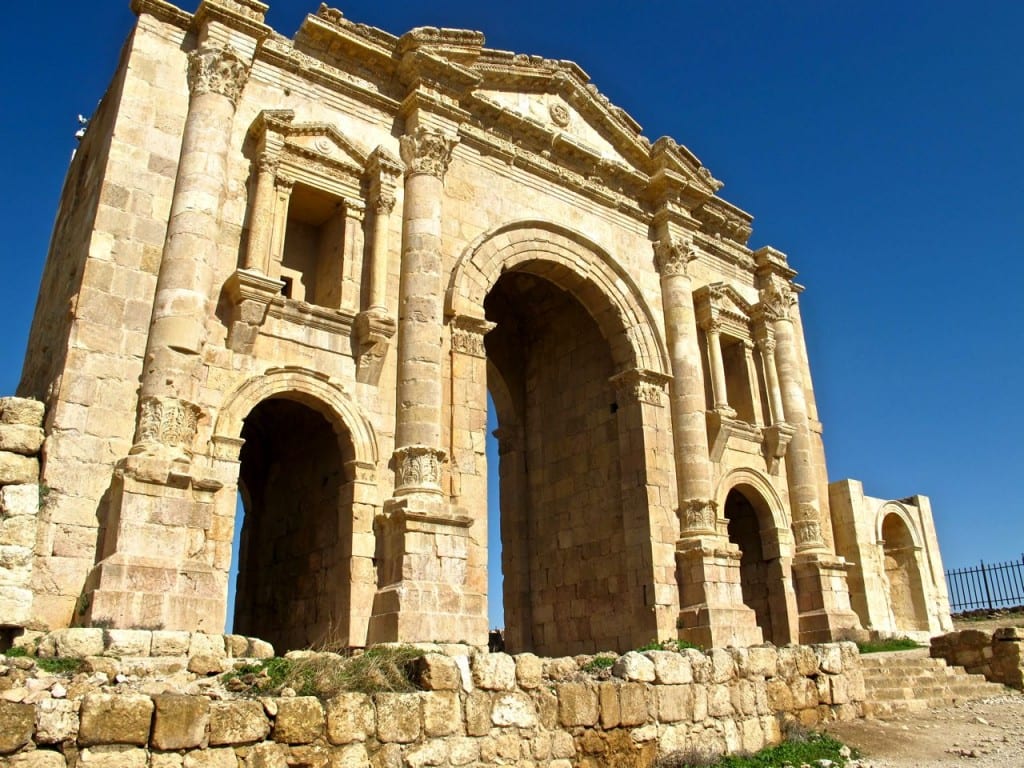 In AD 129-130, Emperor Hadrian visited Jerash and this massive arch was built to celebrate his visit. Believe it or not, this current version is shorter than the original.

The Hippodrome of Jerash

“Hippodrome” is the ancient Grecian name for horse and chariot racing stadiums. While you’re here, check out the Roman Army and Chariot Experience. It’s cheesy but fun.

Colonnade at the Roman Oval Forum

The Forum is made up of 56 columns made from limestone and was once the center of life in Jerash. 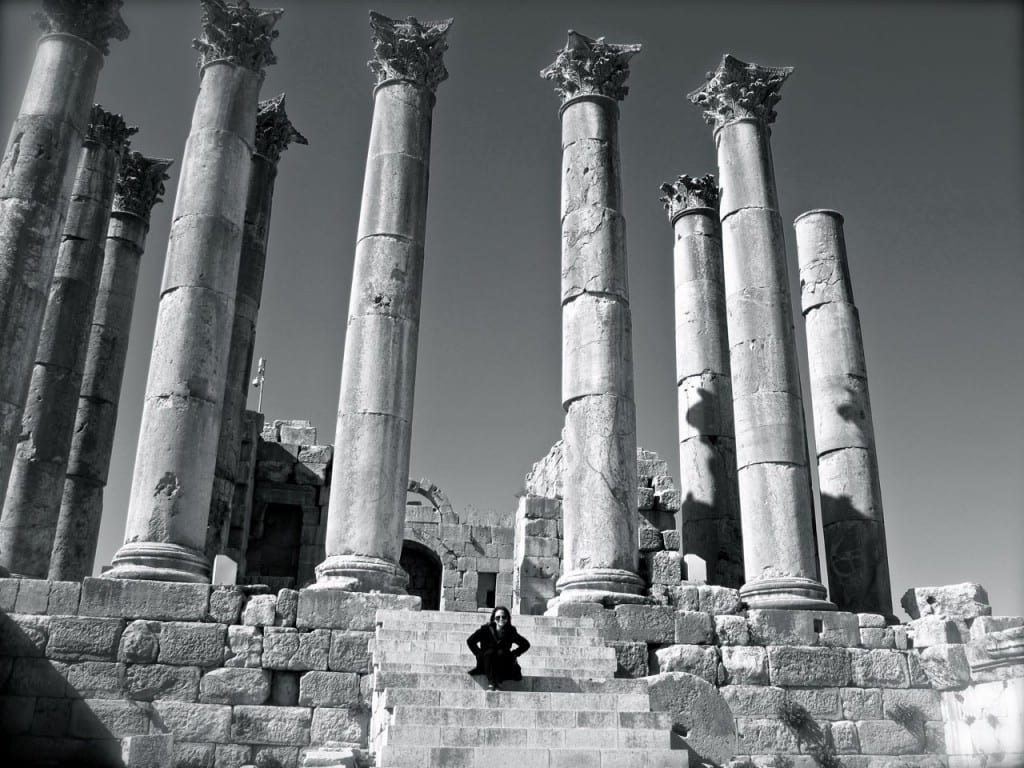 Temple of Artemis in Jerash

The best way to see just how well Jerash has been preserved is at the Temple of Artemis. Built for the Grecian goddess of hunting and the wilderness between 150AD and 170AD, you can still see 11 or the 12 columns in full detail — including the detailed toppings. 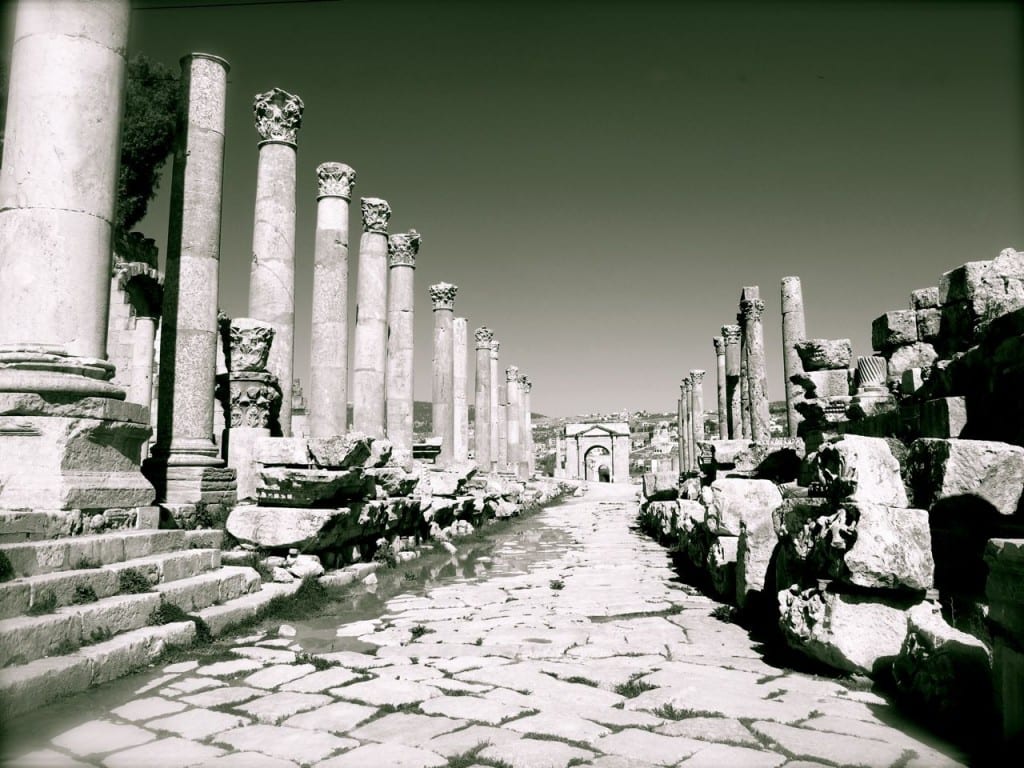 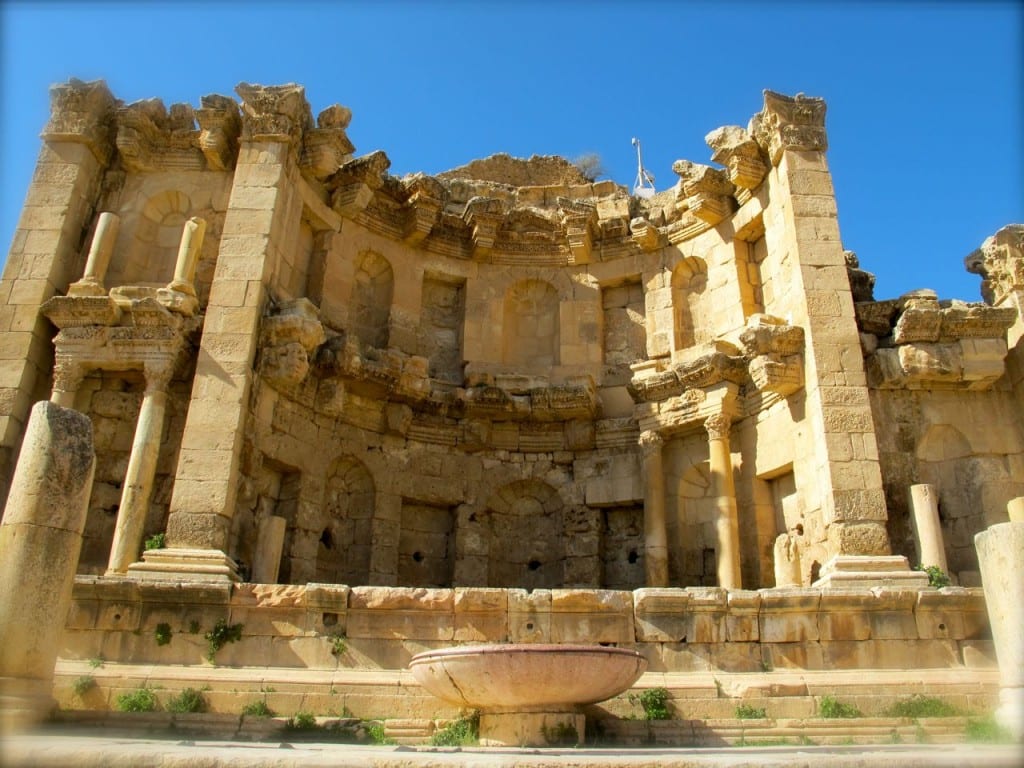 Constructed in 191 AD, the Jerash nymphaeum is a huge fountain. It’s made of marble on the lower level and plaster on the top. Do you see the lion heads? That’s where water would have flown from. 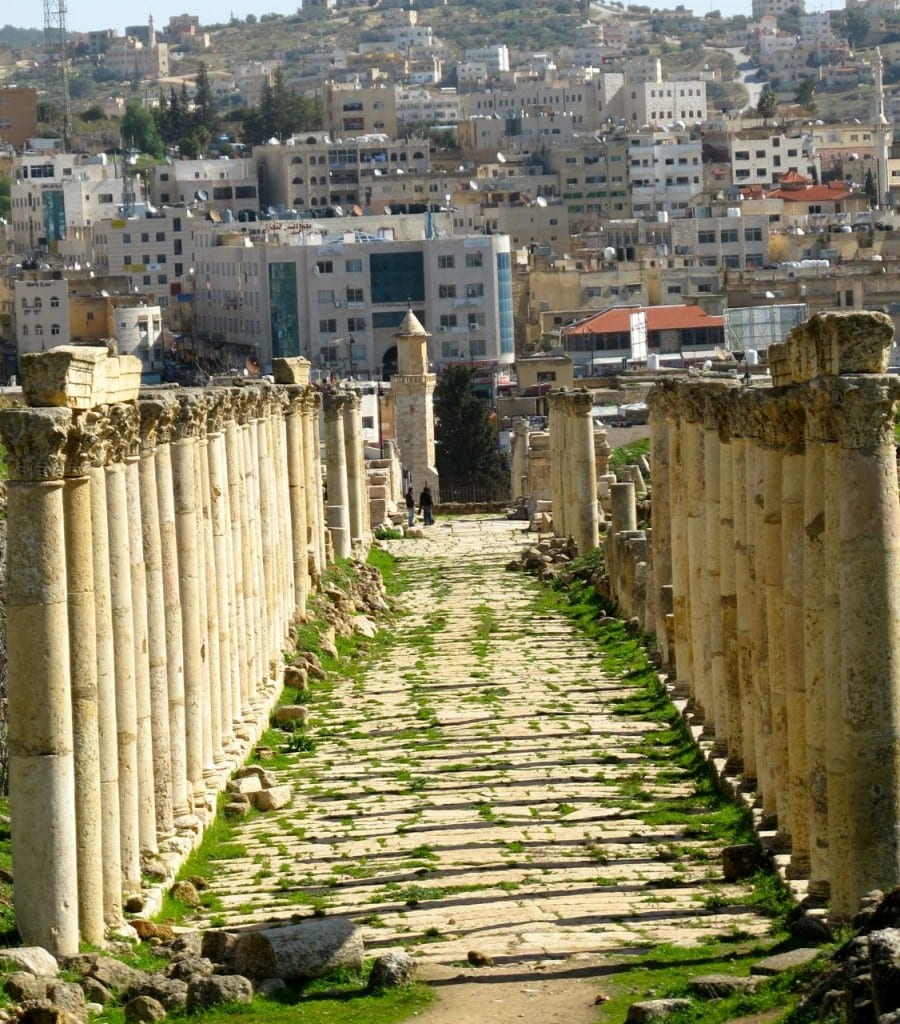 If Jordan is the perfect introduction to the Middle East, the Jerash ruins are the ideal welcome to Jordan.

With ancient ruins as far as you can see holding the memories of layers upon layers of conquests, earthquakes and political upheaval, it’s striking to see the modern Middle East peeking through the columns. Having wandered these abandoned streets and run my fingers over chariot ruts in the stones, Jerash earns its reputations as one of the best-preserved Roman provincial towns in the world. It really is the perfect introduction to Jordan.

It’s not so overwhelming as Petra. However, it’s still big enough to warrant slack-jawed wonder and head-scratching as you try to piece thousands of years of history together in a way that makes sense. Definitely a must-visit! 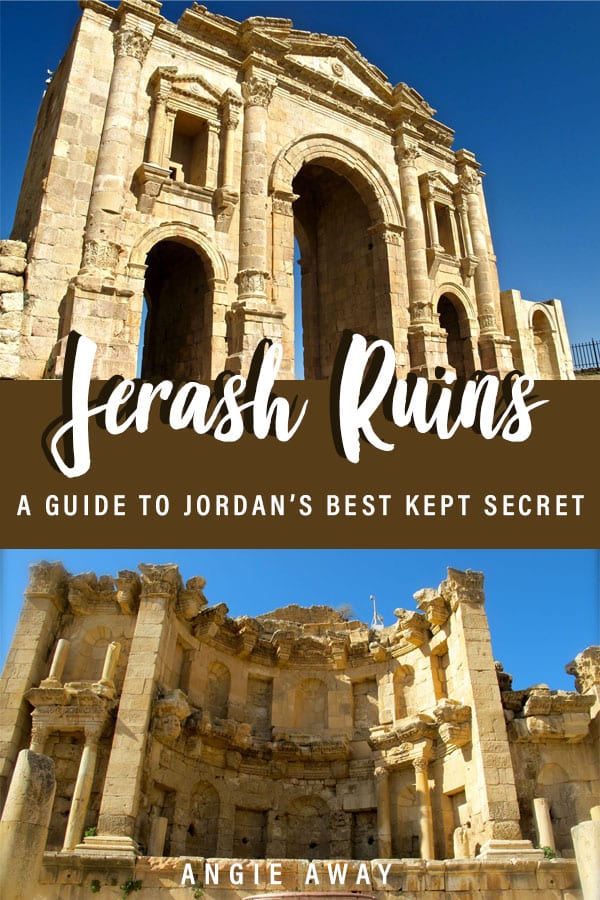 My visit to Jerash was coordinated by the Jordan Tourism Board. All opinions, photos and daydreams are my own.