As it’s probably become clear by now, I’m often drawn to places because they’ve appeared in a film or novel (see Harry Potter and anything Jane Austen), and visiting Petra, Jordan was no exception. As a pint-sized Indiana Jones fan, Petra was one of the most recognizable and truly visitable places in The Last Crusade, so it was an early addition to my childhood bucket list.

There’s so much more to this site than what we can see in the confines of a screen or read in black and white letters on a page. Often the real place is a shock of depth, colors and aromas. The way all our senses are engaged eventually blows past the limits of our own imaginations.

So what is Petra?

Petra makes just about every influential travel list – top places to see before you die, wonders of the world, and it’s been a UNESCO World Heritage Site since 1985.

Most aptly named, Petra is Greek for “rock.” This capital of the Nabateans is carved into the surrounding desert cliffs and sandstone mountains. A trading center and formidable fortress accessible now by a narrow gorge called the Siq, Petra was a bustling city around the 6th century BC. However it was forgotten by the Western world until rediscovery in 1812.

Petra in the Bible

Petra may be mentioned in the Bible under other names, but no one knows quite for sure. Bedouins believe Jebel Haroun is Mt. Hor, where Moses’ brother Aaron was buried. Others believe Petra might be Sela from the Old Testament. Mostly because it means “rock, cliff, fissure,” but that’s also up to interpretation.

Petra is nothing less than magnificent, but how did this remote desert outpost get that way? Excavations have shown an intricate water system that harnessed flash floods with dams, conduits and cisterns. With such a necessity under control, the Nabateans were able to prosper in their artificial oasis.

Even up until 100 AD, as many as 30,000 people may have lived in Petra, so archaeologists have been able to prove that the city was much more than a place for the dead and their ornate tombs.  It was an earthquake in AD 363 that destroyed at least half of the city; Petra never recovered or returned to its former glory.

How long do you need for Petra?

Jordan’s compact size makes it easy to do day trips to most of its top destinations in the country. However, Petra is one of those spots you want to give ample, adequate time to explore.

Even one whole day and night was not enough to see all I could’ve seen, so if you’re planning a visit, factor in plenty of time. Here’s a 48 hour Petra itinerary you can easily follow.

Where to Stay in Petra

While you can make day trips to Petra from Amman and Aqaba, if you want to be closer, you can stay in Wadi Musa. Here are some highly-rated options:

Best of Petra from Amman

This 8-9 hour tour takes you through Petra with a personal guide. You’ll also get pick-up and drop off from hotels in Amman and a lunch of Jordanian cuisine. Check here for more information

If you’d like to combine Petra with a trip to Wadi Rum from, you may like this 12-14 hour private tour. You’ll go on a short horse ride in Petra, have a local guide, and a 1.5 hour 4×4 jeep tour in Wadi Rum. Check here for more information

For a unique adventure in Petra, try horseback riding! Ride from Petra’s main gate to the mountains. Check here for more information

How Long is the Walk in Petra to Get in?

There are a variety of ways to enter the city, and the Nabateans made sure none were easy. The walls of the Siq reach up to 650 feet high, wrapping you in rose and rust rock striations for about 20 minutes. Then you’ll spill out at the end of the mile-long path to take in the first peek of the imposing Treasury.

Knowing it’s coming around the next turn, or maybe the next, or definitely this one, leaves you feeling more like intrepid Indiana Jones than ever.

I arrived at Petra’s entrance around 8 a.m. on a cool February morning with Ibrahim and Rami, my Visit Jordan-appointed tour guide and driver. After walking along the mile-long path, I arrived at my first stop.

There are more than 800 unearthed stone tombs in Petra. The Kazneh, commonly known as the Treasury, is the most recognizable. Thanks, Harrison Ford!

But as far as we know, the Treasury never served as a bank or vault. The name Kazneh means treasure. It derives from the Bedouin legend that the Pharaoh chasing the Israelites hid his loot on top of the building.

Whatever the truth may be, it hardly matters now. As the first striking facade you see upon exiting the Siq, the Treasury is nothing short of a jaw-dropping marvel.

All I could muster was a breathless, “Wow!”

Like many who visit the Rose Red City for the first time, I was under the impression that the Treasury was Petra. I took 500 pictures in the space of 15 minutes before Ibrahim ushered me around a corner. There I was bowled over by even more carved facades and a landscape so vast and so red… how would I ever see it all?

You can find hundreds of Nabatean tombs erected to memorialize kings and leaders. There are too many to see in one day! Some say only a small percentage of Petra has been excavated. With enough funding, there could be countless more Treasury-like facades to find.

What I Thought of Visiting Petra

Petra is an archaeologist’s dream come true, but the ticket price also includes friendly guards, persistent children selling rocks and bits of pottery, camels and mules and donkeys, tea with Bedouins, stairways to heaven, vistas that stretch miles and miles and a rich, mysterious history that isn’t as well-known as say, ancient Egypt’s.

Petra is so massive that I’ve only begun to scratch the surface, so there’s much more to come. For now, I say GO. If you’re even considering a trip to Jordan, GO! Petra was one of the most remarkable places I’ve ever been, well worth the money and the time. GO!

There’s much more to come beyond just the Siq and the Treasury, possibly including footage of me clinging to a mule while attempting to ascend a steep cliff. Oy. The things we do for a good story! Check my other posts on Petra below:

Your turn! Is visiting Petra, Jordan on your bucket list? Have you been? Were you as impressed as I was? 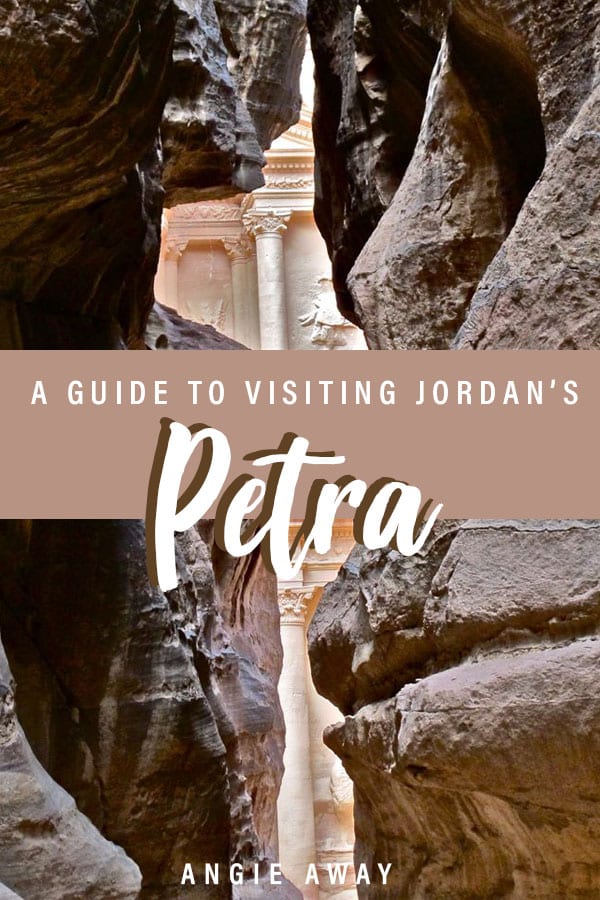 I was a guest of Visit Jordan during this adventure. All opinions and awestruck wonder are my own.

10 thoughts on “Visiting Petra, Jordan: A Guide to the Rose Red City”