There are so many places to visit in Amman, Jordan that span through history, it almost feels overwhelming. Here was my experience and all that I managed to see in just one afternoon.

So this is what it feels like when the bank account runs dry and suddenly big projects come back onto the radar? Sigh.

The weather in Amman was frigid and damp, really much colder than I expected, so I didn’t really mind being cooped up most of the time.

But after nearly two weeks in Jordan, I realized I hadn’t seen more than the interior of my apartment, some local cafes, and a couple of conference rooms. After the social media consulting gigs wrapped, I wanted nothing more than to see (and take 10,000 pictures of) the sites, to breathe some fresh, if a little dusty, air and to get out.

Where to first? The capital city and my home for a few bleak weeks: Amman.

Once I broke free of conference room gray, the sun made an appearance and followed me all over Jordan — well, not to Wadi Rum, but everywhere else. Jordan Tourism set me up with the dynamic duo. There was Rami, the soft-spoken, limited English, forever-grinning driver, and Ibrahim, a.k.a. the Beast, my intrepid guide who knows absolutely everyone in the entire country. It was the beginning of my first, but hopefully not last, Jordanian road trip, and I was more than ready to roll.

Want a similar experience to mine? Try this private tour

5 Places to Visit in Amman

In Rami’s shiny black SUV, we wove in and out and up and down Amman’s famous hills, past minarets, souqs, and white houses, while Ibrahim gave me the scoop. According to the Beast, there used to be only seven hills in Amman proper, but urban sprawl has increased it to 19 different jabals. 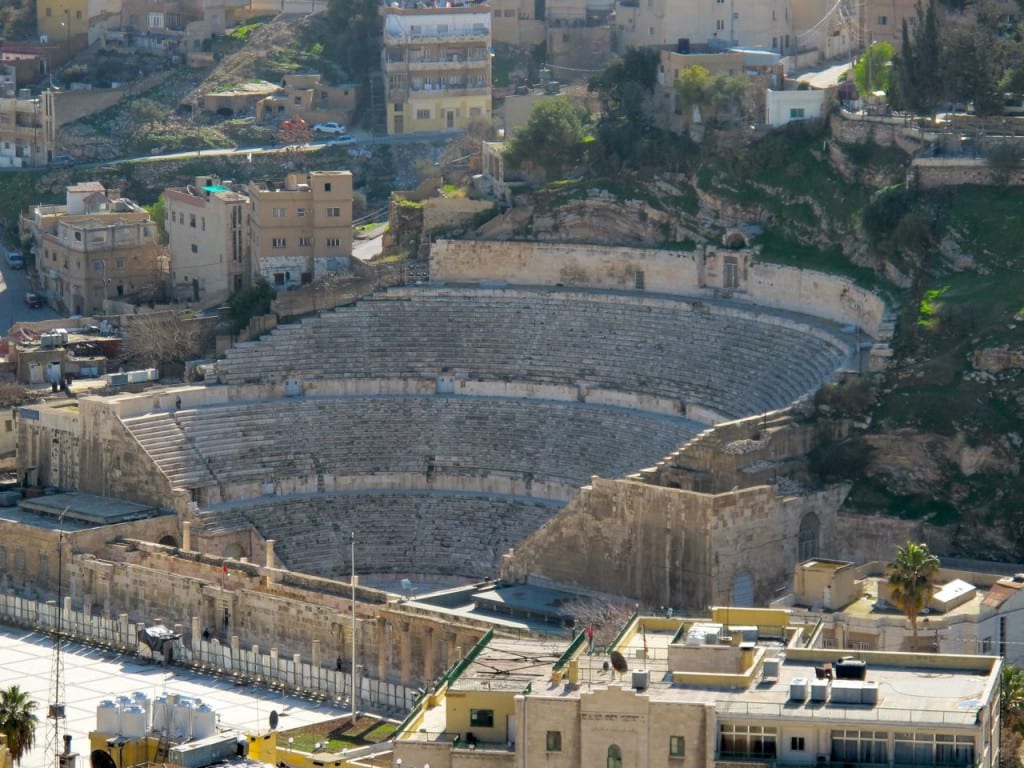 Our first stop among the hills was the Roman Theater, built during the reign of Antonius Pius about 150 years before Christ. It seats up to 6,000 spectators and even today offers great acoustics.

I’m mystified that anything manmade can survive so long. 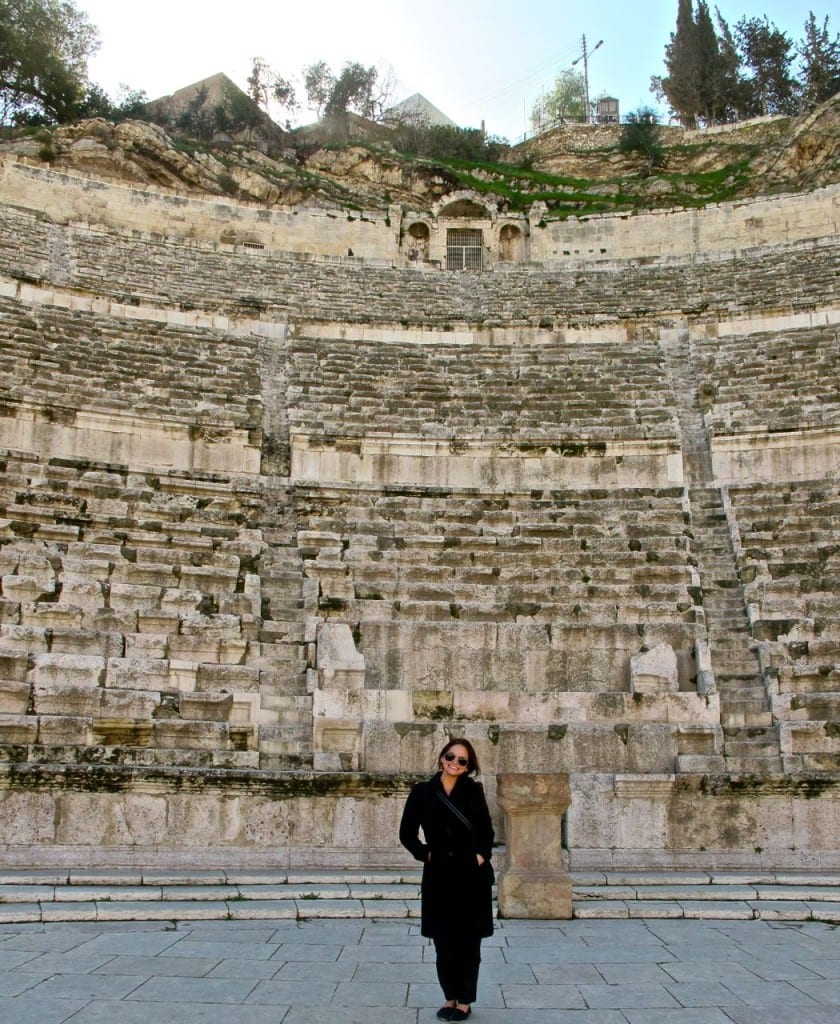 Walking in the footsteps of whom? 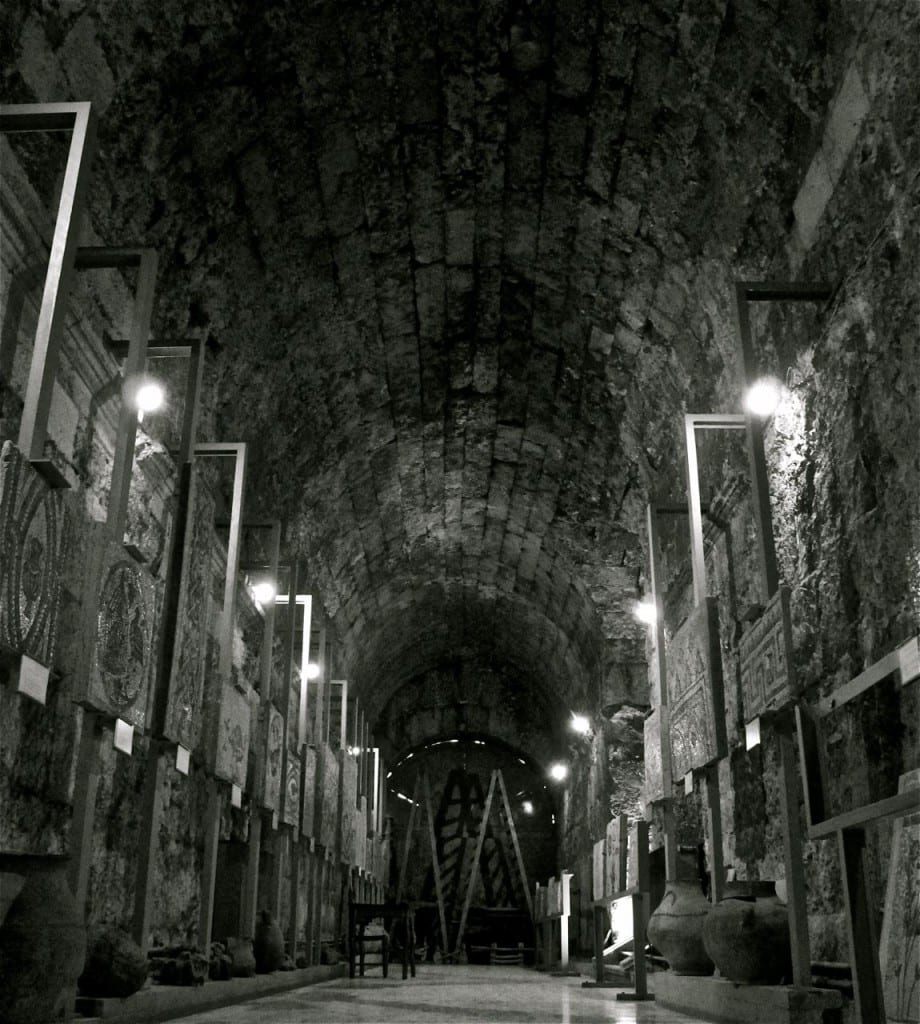 Room of mosaics at the Museum of Popular Traditions

Built into the very foundations of the Roman Theater is the Museum of Popular Traditions. Filled with traditional Jordanian costumes, antique jewelry and 6th century mosaics from Madaba and Jerash, it was a perfect appetizer for the grand buffet I’d soon experience on the rest of our road trip. 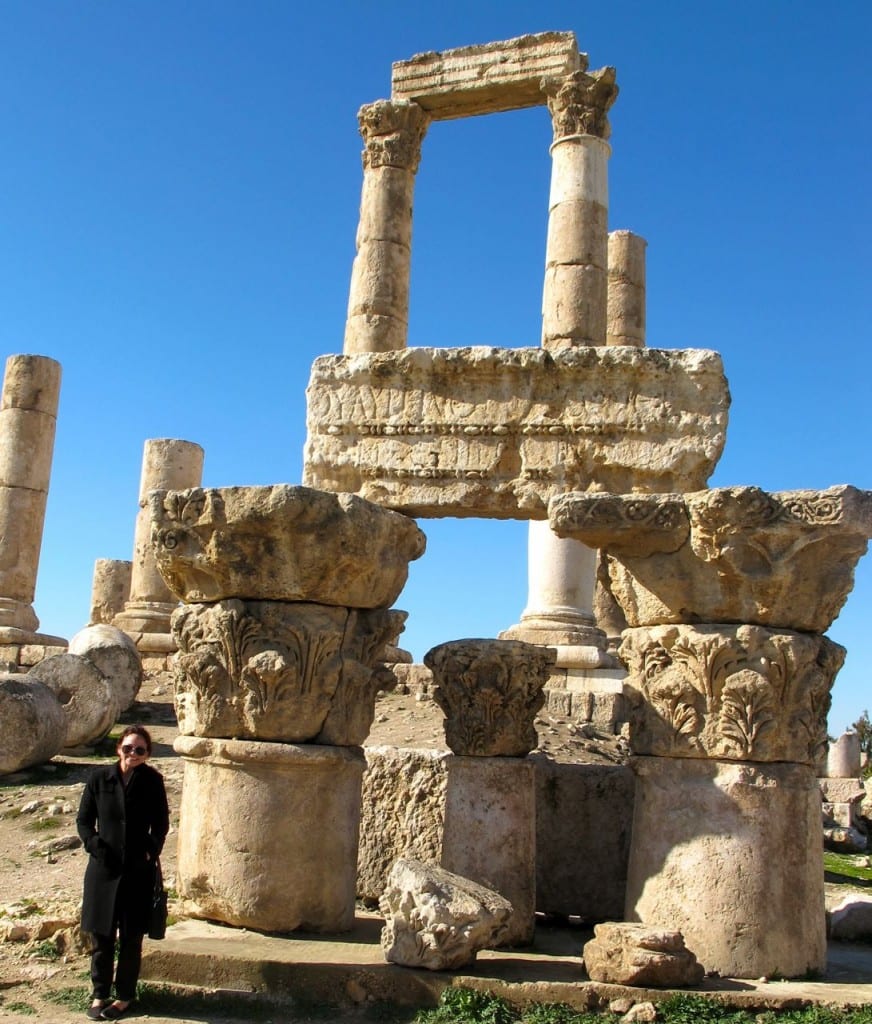 Uphill from the theater, atop Jabal al-Qala’a, we arrived at the towering Citadel, site of ancient Rabbath-Ammon, the Ammonite capital in about 1200 BC.  For all my church peeps out there, the Ammonites fought with Saul and David. More about those connections later!

The view from the Citadel is one of the best in town, and it’s easily one of the top things to do in Amman, though I could’ve done without the bitter cold winds whipping me around the ruins. I guess that’s what I get for traveling in January! This particular hill lies at the center of downtown, so its ruins are visible from many vantage points below.

In this one complex, you can see Byzantine basilica ruins from the 6th or 7th century; al-Qasr, a palace dating from the Islamic Umayyad period; and the crumbling Great Temple of Amman from Roman times, about 160 AD.

The onsite Jordan Archaeological Museum is worth a 15-minute peek. Its antiquities range from prehistoric times to the 15th century and feature the Dead Sea Scrolls and a rare Iron Age sarcophagi. 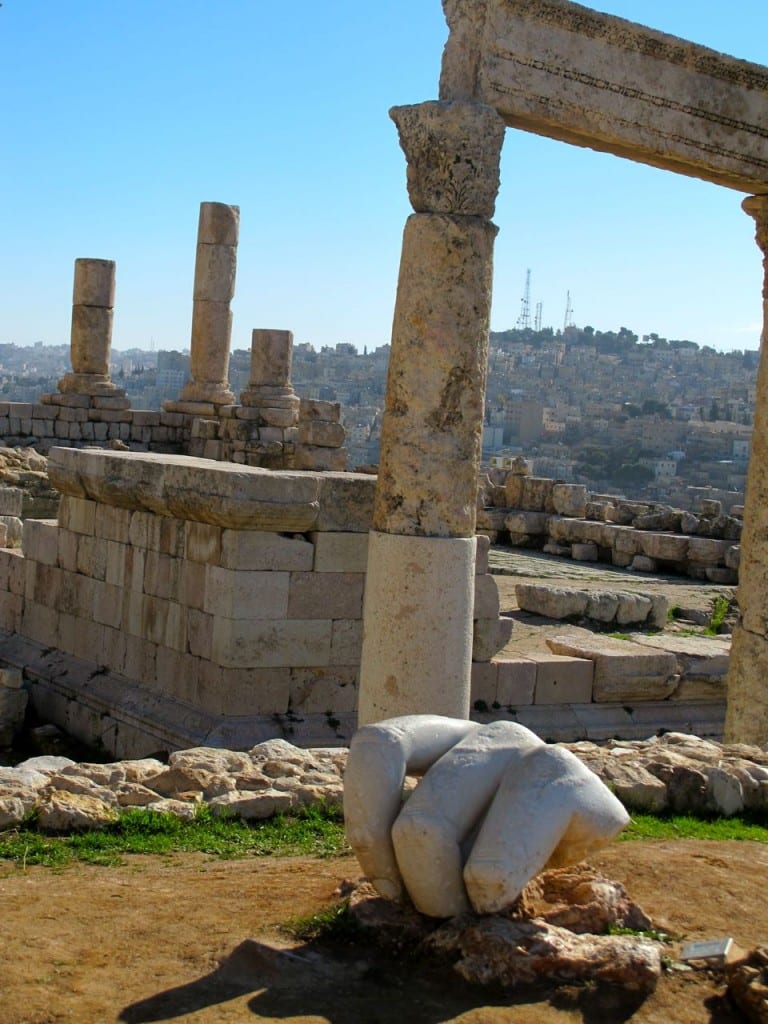 5. The Site of Hercules’ Fist in the Citadel

With so much to see at the Citadel spanning so many lifetimes, it was admittedly hard to digest in my short visit. Once I saw Hercules’ unattached fist lying balled on the ground though, I knew that it would be the enduring image of my time on Jabal al-Qala’a.

The fingers looks poised for something… what? A fight? A chin-support? A Michael Scott-worthy fist bump?

And what did the complete statue look like back in the day when Roman citizens worshipped gods and goddesses? How imposing must the original have been to have such a massive fist? What did visitors to ancient Amman think when they saw this towering marble man? What ultimately brought him crashing down?

And what would the Romans say if they saw their object of worship reduced to an almost unrecognizable rubble heap?

My imagination was already zooming into overdrive and I was only three hours into a weeklong road trip. Buckle up… Rami’s taking us to Jerash!

In Amman, I stayed two nights at the 4-star AlQasr Metropole Hotel, a 66-room boutique with several trendy restaurants, great service, and amazing views. I attempted to eat at all of the dining options; Trattoria, obviously Italian; Vinaigrette, sushi and a magical view; and Oobe, trendy and hip with a metropolitan menu. I was not disappointed!

After several weeks in one country, I was craving something aside from traditional cuisine… which I love, but really just needed a break from hummus in favor of spaghetti and sushi. (Not at the same time!) The hotel itself was great, too. Perfect location, clean rooms, very quiet. Thanks for hosting me!

If AlQasr Metropole Hotel is booked up, try these options:

Check here for even more hotels in Amman

Looking into book a Jordan trip? Here are some tours that include Amman

Have you been to Jordan’s capital city? What are some of the best places to visit in Amman that I left off my list?

For more on Jordan:

My activities in Amman, Jordan were courtesy of the Jordan Tourism Board. All opinions, photos and imaginations are my own. 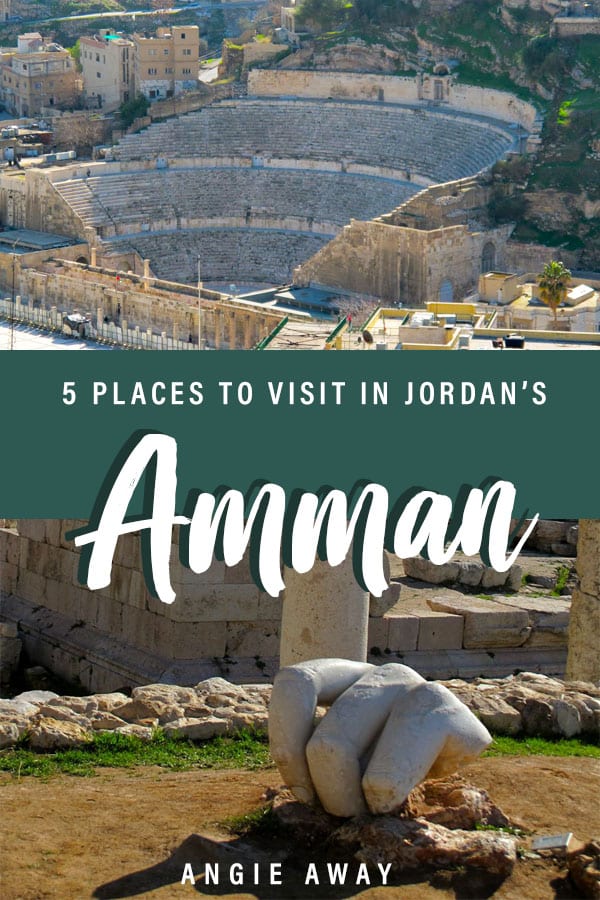 3 thoughts on “5 Places to Visit in Amman”