Floating in the Dead Sea? Huh?

As a Sunday school kid flipping through the maps in the back of my Bible, I couldn’t imagine a place less that sounded less appealing than the Dead Sea. It rolls off the tongue with all the grace of a belly flop.

I imagined skeletal, big-eyed fish floating weakly at the surface and haggard trees slumping over the banks. Not to mention the magnificent heat and oppressive sun that must surely bake residents every day.

My juvenile imagination couldn’t have come up with a more incorrect scenario. If I’d only known in Sunday school what a joy the Dead Sea really is, I would’ve made my way to its shores long ago.

The view across the Dead Sea, toward Israel

What exactly is the Dead Sea?

Ringed with sparse olive trees and palms and scrubby Mediterranean vegetation, the Dead Sea isn’t frightful or hideous in the least! It’s just misunderstood and unfortunately named! If only it had been called the Peculiarly Salty & Low Altitude Lake, perhaps I would’ve visited much earlier.

A few facts about the Dead Sea: 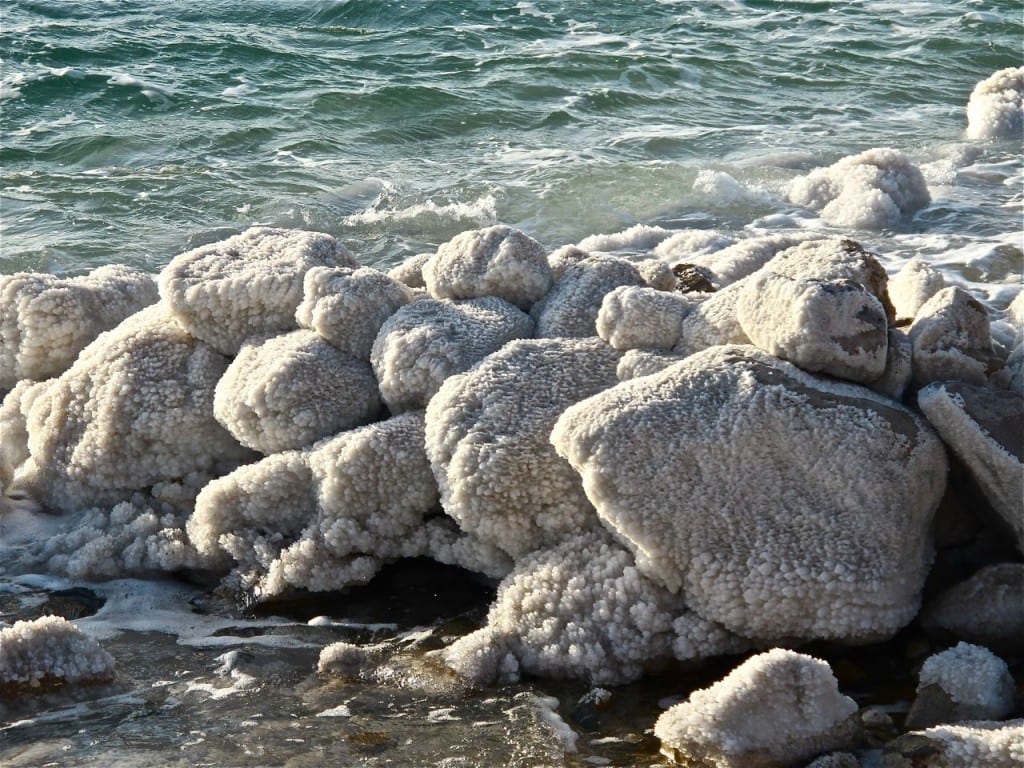 Salt crystallizes on rocks at the shore

Where is the Dead Sea?

After an already jam-packed day exploring Amman’s Citadel and the extensive Jerash ruins, I couldn’t imagine cramming anything else in – except maybe a spa visit.

My guide Ibrahim, the Beast, had a crazy notion that I would be floating in the Dead Sea by sunset. However I’d been freezing my backside off in Amman for the past two weeks and couldn’t imagine swimming in the middle of winter. Resigned that I’d have to come back again to actually experience the Dead Sea, I napped as Rami drove west.

I left my coat and hat in the car and checked into the palatial Mövenpick Resort & Spa, an Arabic-village style, 5-star complex on the northern border of the sea.

Can You Swim in the Dead Sea? Well…

We raced to the shore. I had a spa treatment booked at sunset and we needed to fit in any Dead Sea activities before that. Since it was a clear day, I could see the entire expanse of the sea, 42 miles from top to bottom and about 11 miles across to Israel. Unfortunately, the wind had picked up considerably and the lifeguards had closed access. It appeared my Dead Sea dreams were not meant to be.

The Beast had other ideas.

Despite the rough waves and current flowing forcefully toward the sharp salty rocks, he insisted it was safe to hop in. It was plenty warm enough to go for a dip, and I couldn’t very well travel all the way to Jordan and NOT float in the Dead Sea just because I might float away to Israel. 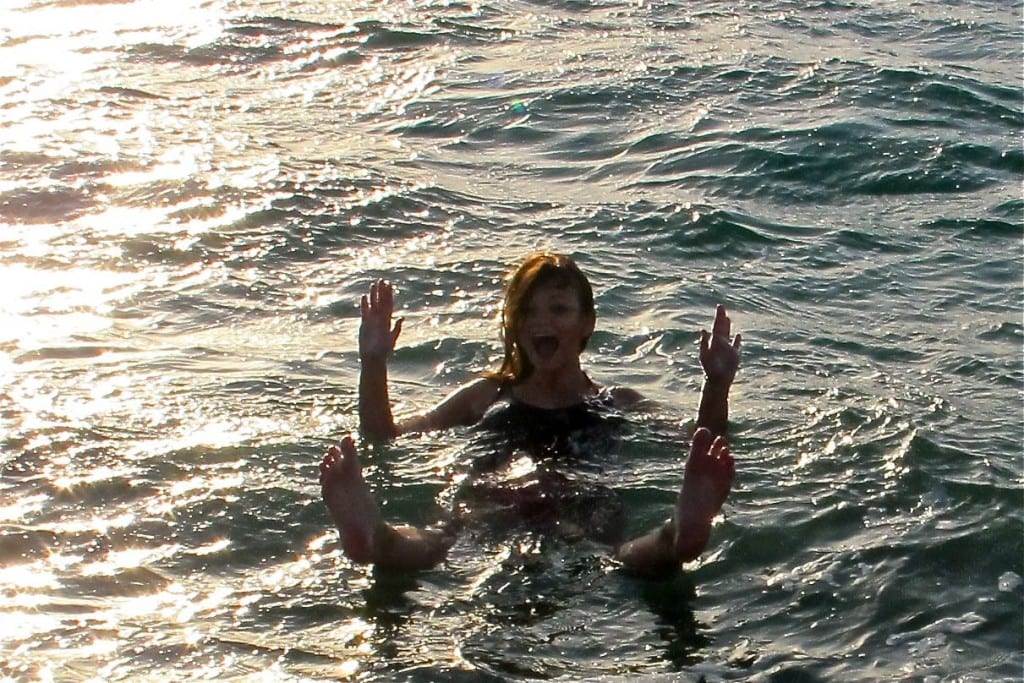 How Exactly to Float in the Dead Sea

Ibrahim advised me to just walk backwards in the water and then gently sit down. Didn’t seem like a great idea, but I did it. And guess what?!

The moment you pick your feet up from the bottom, you’re bobbing like a cork with absolutely no effort needed. You’re weightless in the same way you are when floating in the ocean, but all that extra salt makes it feel bouncy and bubbly and a little out-of-control. It’s just wild!

The wind and strong current made things interesting, and we had to be cautious not to drift away. But it was well worth a spot on the bucket list. There’s nothing in the world like the sensation of floating in the Dead Sea. It’s so peculiar!

Ibrahim & I were the only floaters until a group of Japanese businessmen hopped in, clumsily smashing into us and into the crystallized salt rocks as the current whipped us all together. A few Europeans joined the mix, and suddenly we had a little party. It was endlessly entertaining to participate in this bizarre, once-in-a-lifetime experience with a random group of strangers from all over the world.

It was one of those moments you get nostalgic for even before it ends. 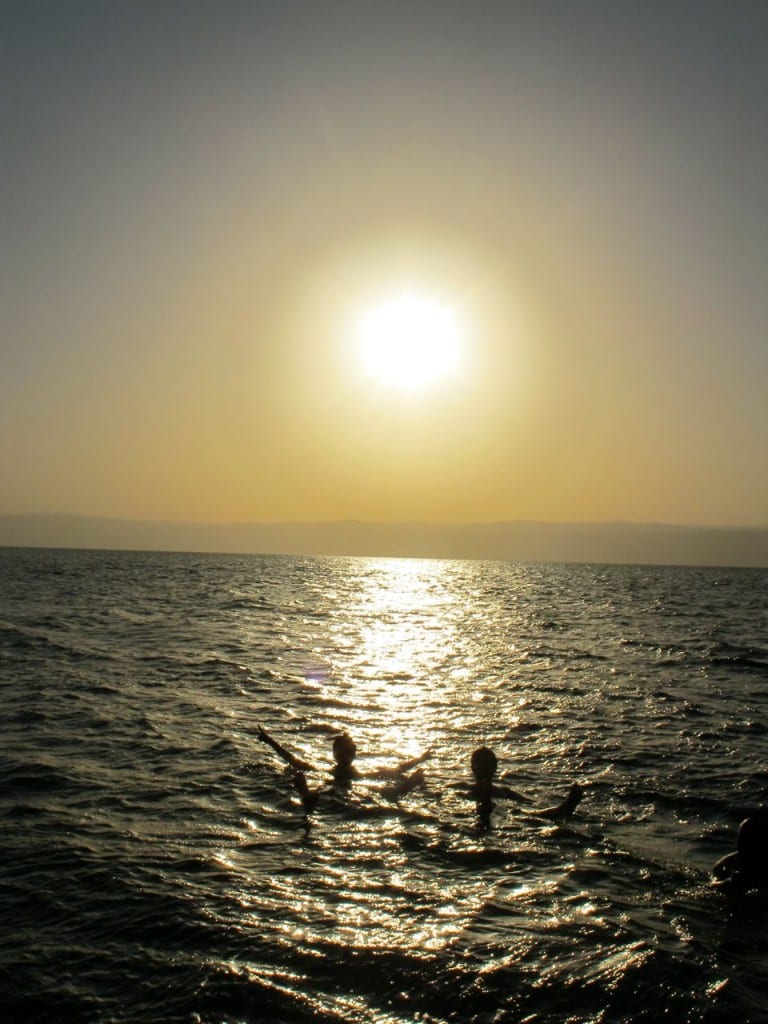 Things to do before you get to the Dead Sea:

Things you can do in the Dead Sea:

Things you can’t do in the Dead Sea: 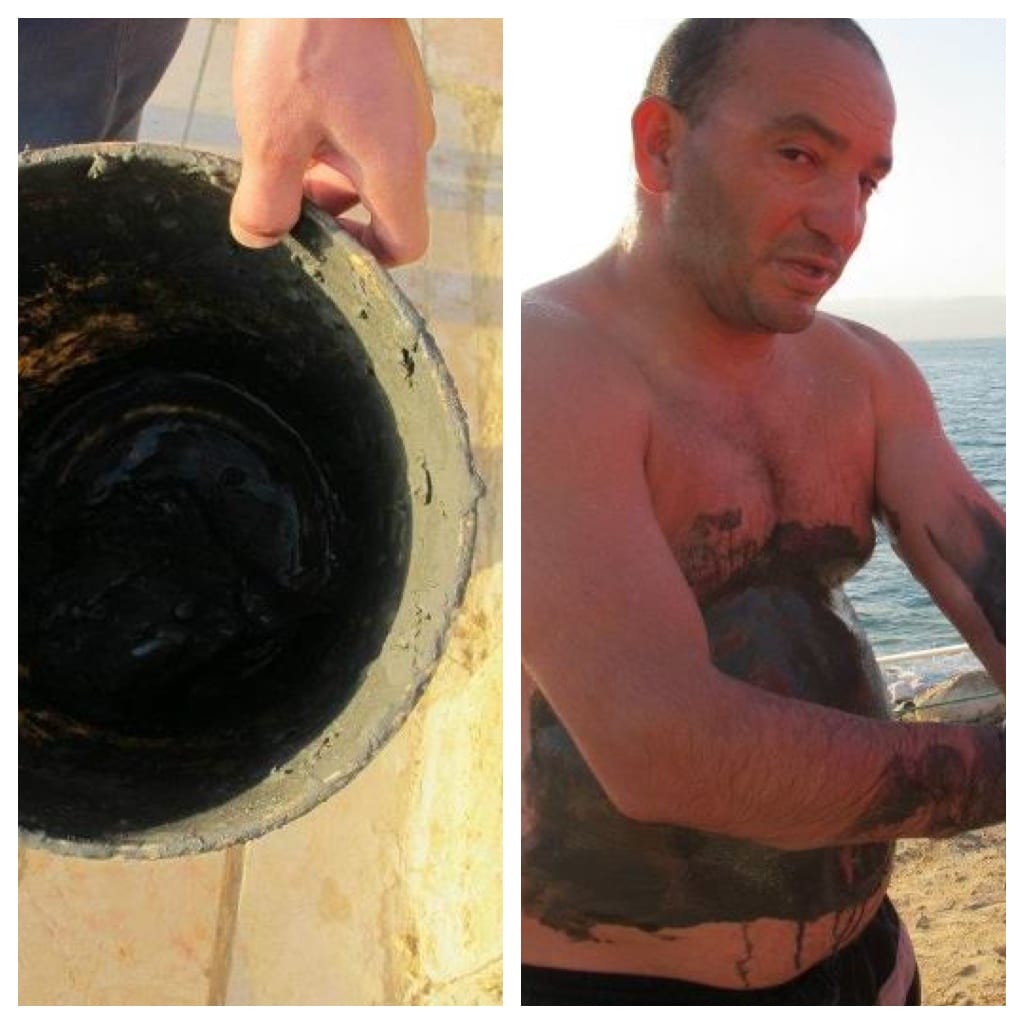 After my experience as a buoy, it was time to test the famous Dead Sea mud. Ibrahim expertly demonstrated how to apply it, though I suspect I could’ve figured out how to coat myself in mud without his assistance. A couple of Libyan teenagers crowded around to watch the spectacle, something Ibrahim found endlessly amusing. We caked ourselves with a thick layer of mud and waited for the suggested 20 minutes before rinsing off. 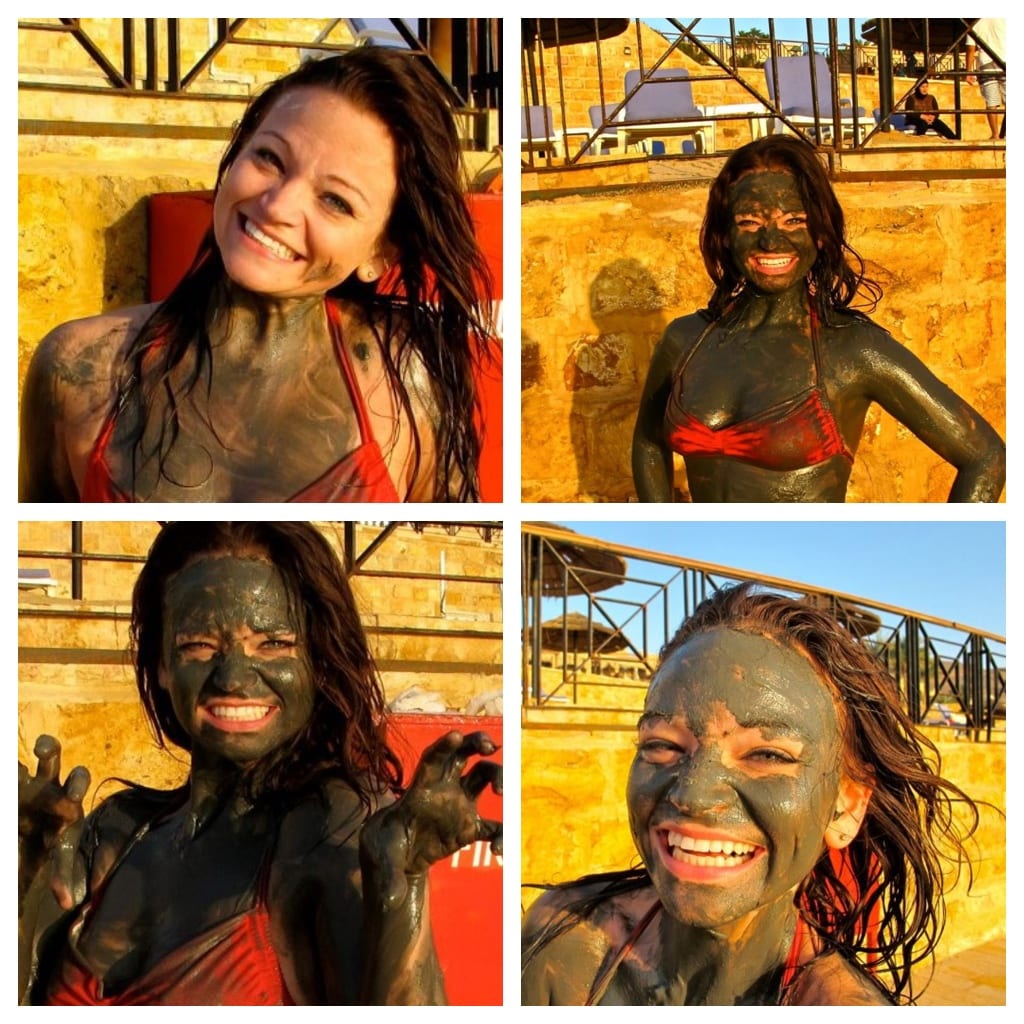 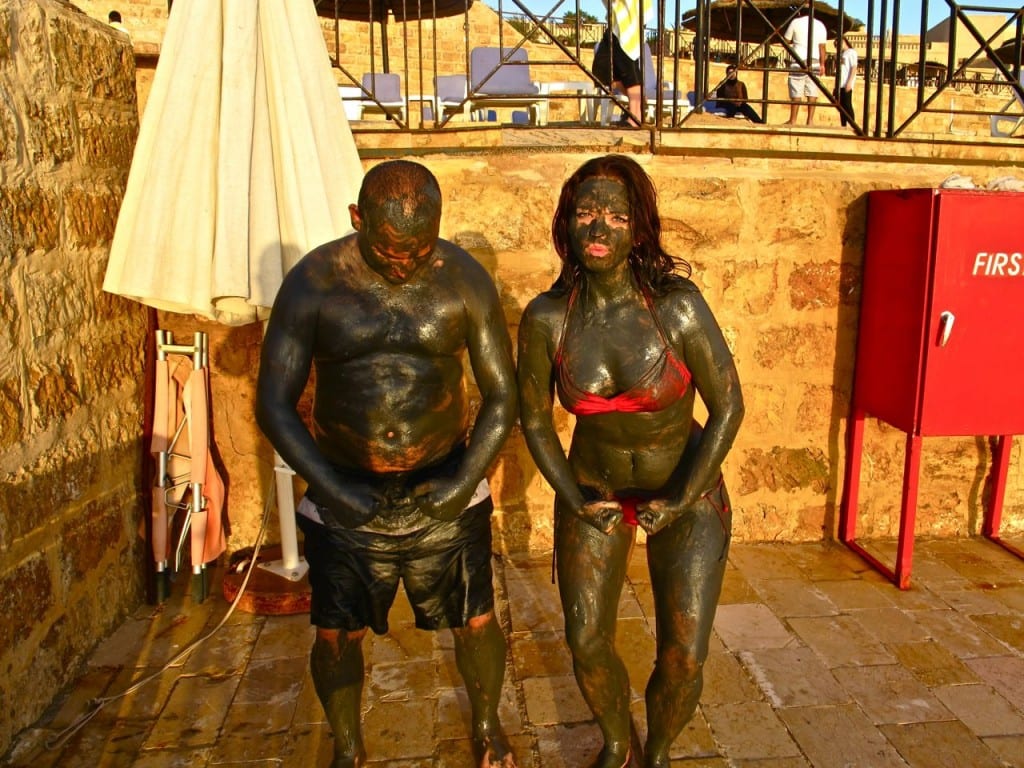 Ibrahim and I flex our muscles

The staff at the Mövenpick brought us towels and a freshwater hose to wash off.

Add in more mud at the spa…

As I was rinsing I realized I was running late for my appointment at the resort’s Zara Spa. I rushed away in a golf cart, arriving just in time to change into a cushy bathrobe and catch a shimmering sunset from the infinity pool deck.

Zara Spa is expansive, covering 1.5 acres with its treatment rooms, pools and relaxation areas. Even though I’d just covered myself in mud and floated in the medicinal Dead Sea, I chose a professional mud wrap – you really can’t get enough of the stuff when you’re there, you know what I mean?

First I was scrubbed with sea salt – the texture was a bit rough but it was surprisingly pleasant for an exfoliation. Then I was covered in gooey Dead Sea mud and wrapped up like a Jordanian burrito while my therapist gave me a heavenly scalp and face massage.

Don’t even think about visiting without getting this treatment. Afterward, lounge around in the outdoor hydro-therapy pool and the indoor pools filled with Dead Sea water of varying temperatures.

I felt like 10 million bucks when I left and my skin has never glowed like that before! 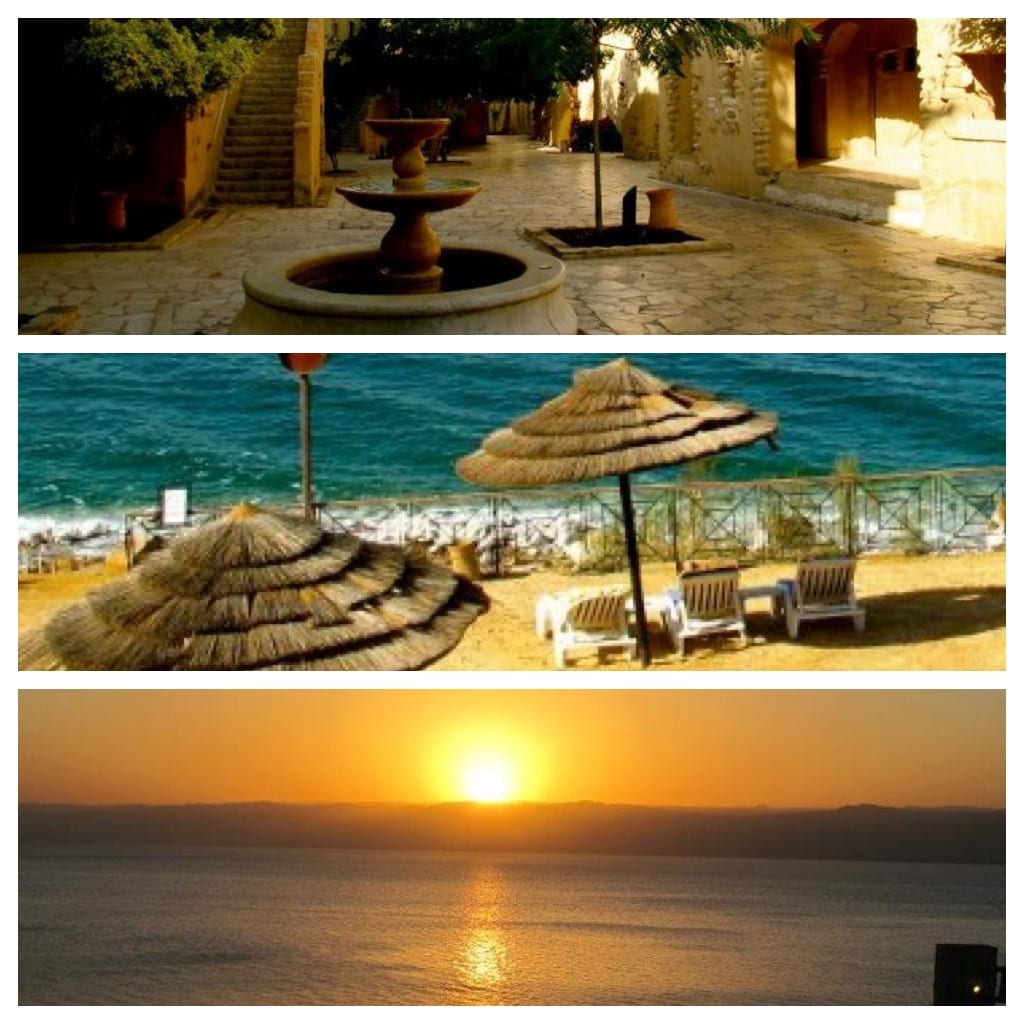 Tours to the Dead Sea

If you can’t stay over like I did, try a day trip! Here are some to consider:

Where to Stay Near the Dead Sea: Mövenpick

There are a handful of resorts lining the shore of the Dead Sea on the Jordan side, and the Mövenpick Dead Sea Resort & Spa actually conveys the feeling of authentic Middle East.

Designed to look like a quaint Arab village, the resort cleverly conceals its massive size with individual buildings that stagger in terraces toward the sea.

The food was good and plentiful, there was a belly dancer in the main lounge for the evening’s entertainment and there are plenty of pools to keep guests cool when they’re not frolicking like sea monsters at the salty shore.

Have you been floating in the Dead Sea? What did you think? 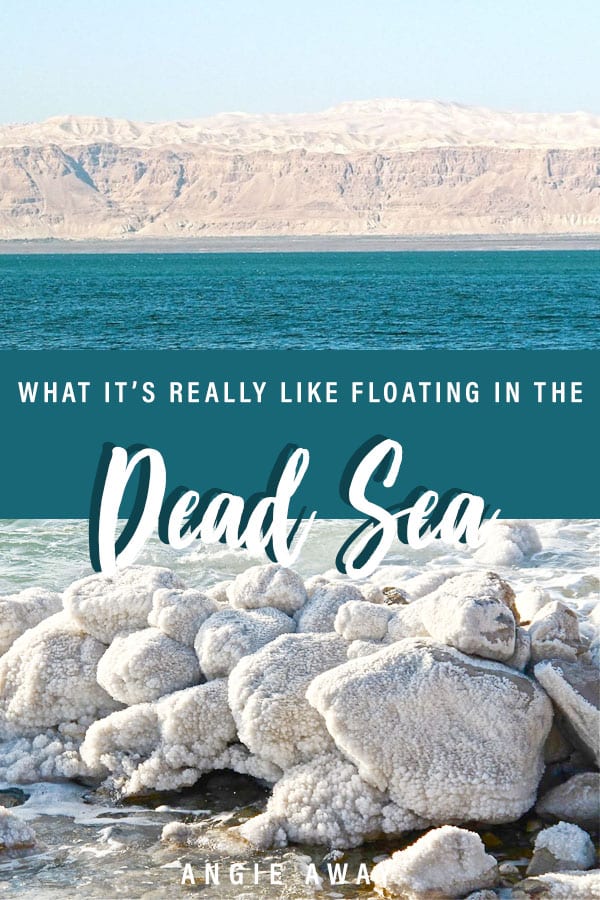 A big thank you to Visit Jordan and Mövenpick Hotels for the gracious Jordanian hospitality. As always, views and unfortunate bikini mud shots are mine.

15 thoughts on “Mud, Salt, and Floating in the Dead Sea, Jordan”