Alex and I have returned from our pilgrimage through Israel! It was seven packed days with history, hiking and a ridiculous amount of hummus. As I predicted in my earlier post, Alex made it about three days before getting fussy about not having pizza for dinner. But he tried some new foods, so I’m proud of him.

Israel was different than I expected. Not sure why I thought it would be miles and miles of desert, or why I assumed I wouldn’t be affected by jetlag. But there I was, getting car sick from driving up lush mountains and falling asleep like a rock at 7 p.m. It was a life changing trip, and I’ve compiled some of my favorite moments here.

Take a look at my list of things to do in Israel!

1. Float in the Dead Sea

Floating in the Dead Sea might sound frightening and maybe even nasty, but guys, it was one of the coolest/weirdest things I have ever done in my life. Definitely one of the most bizarre and photo-worthy things to do in Israel. 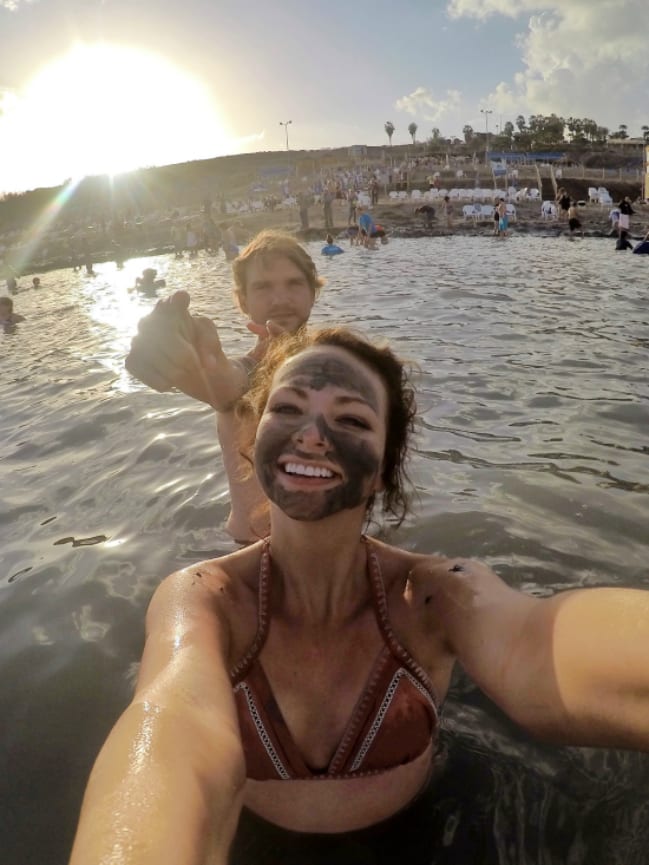 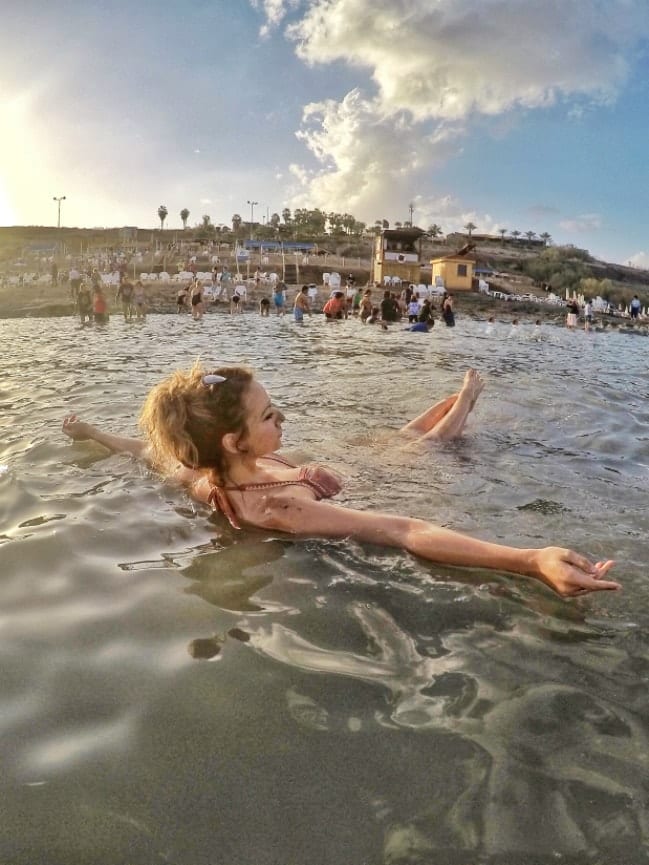 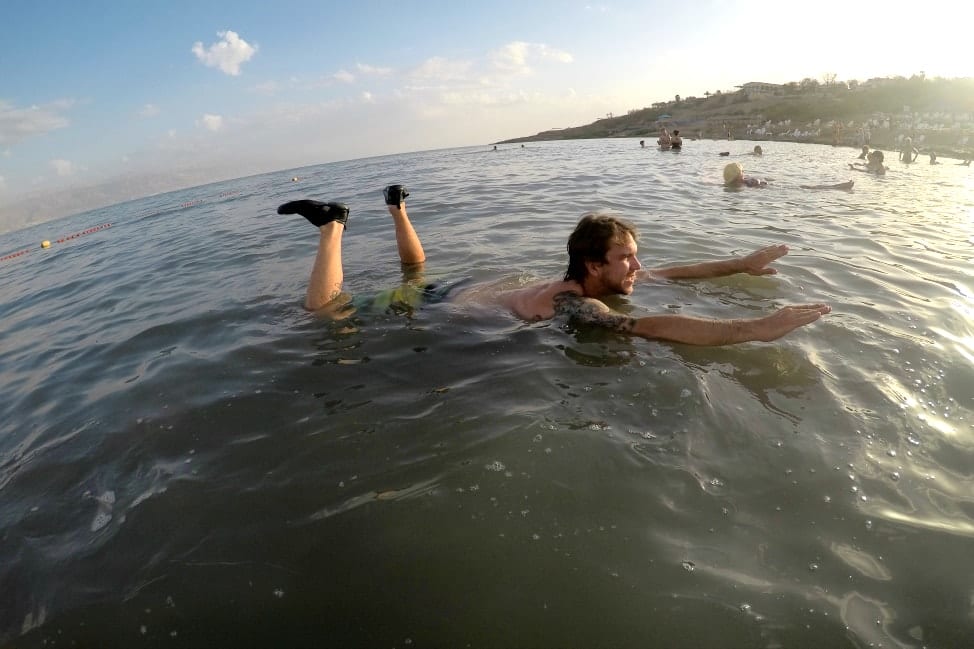 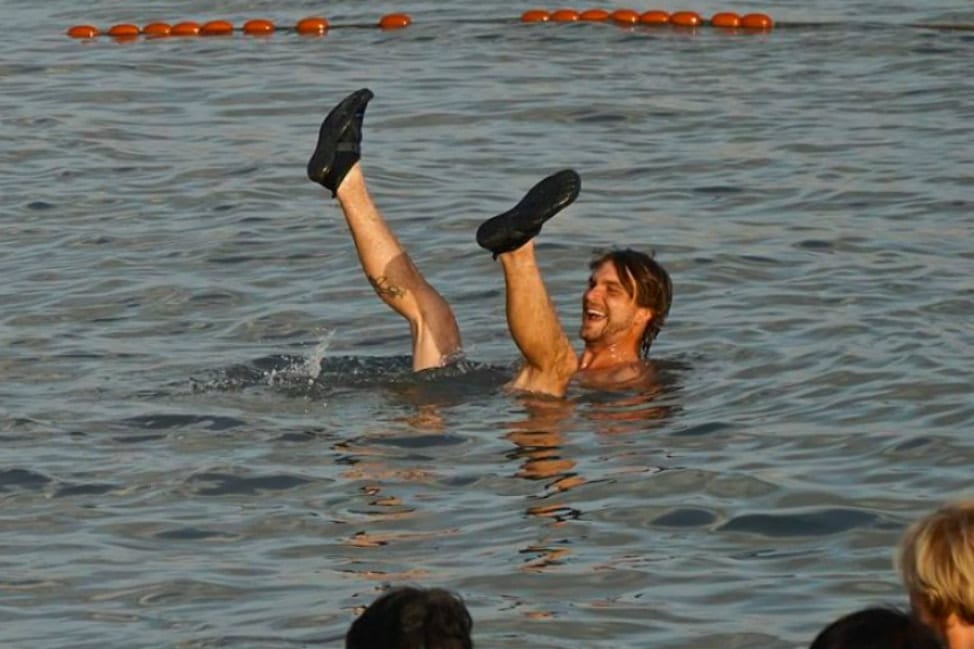 Alex had mixed emotions about the Dead Sea. He sprinted into the water eager to see if he would float (he claims he’s never been able to before), and laughed like a hyena once the sea popped him out. However, he also thinks it’s the most disappointing body of water in the world – this guy loves to fish, and because of the high mineral content, there is no sea life.

2. Get Baptized in the Jordan River

It feels a bit odd to put a religious activity on a list of things to do in Israel, but getting baptized in the Jordan is quite a draw!

A couple thousand years ago, this fella named John started preaching and preparing people for the arrival of Jesus. He began to baptize people – thus, earning himself the nickname, John the Baptist. Surprise, he was a baptizer, not a Southern Baptist.

Jesus then appeared, arriving at the Jordan River from Galilee. He wanted John to baptize him. John objected, “I’m the one who needs to be baptized, not you!”

But Jesus insisted. “Do it. God’s work, putting things right all these centuries, is coming together right now in this baptism.” So John did it.

The moment Jesus came up out of the baptismal waters, the skies opened up and he saw God’s Spirit—it looked like a dove—descending and landing on him. And along with the Spirit, a voice: “This is my Son, chosen and marked by my love, delight of my life.”

The tradition of baptism – full immersion, not sprinkling – was born in this spot at this moment, and was adopted by Christians as a symbolic way to profess allegiance to Christ. 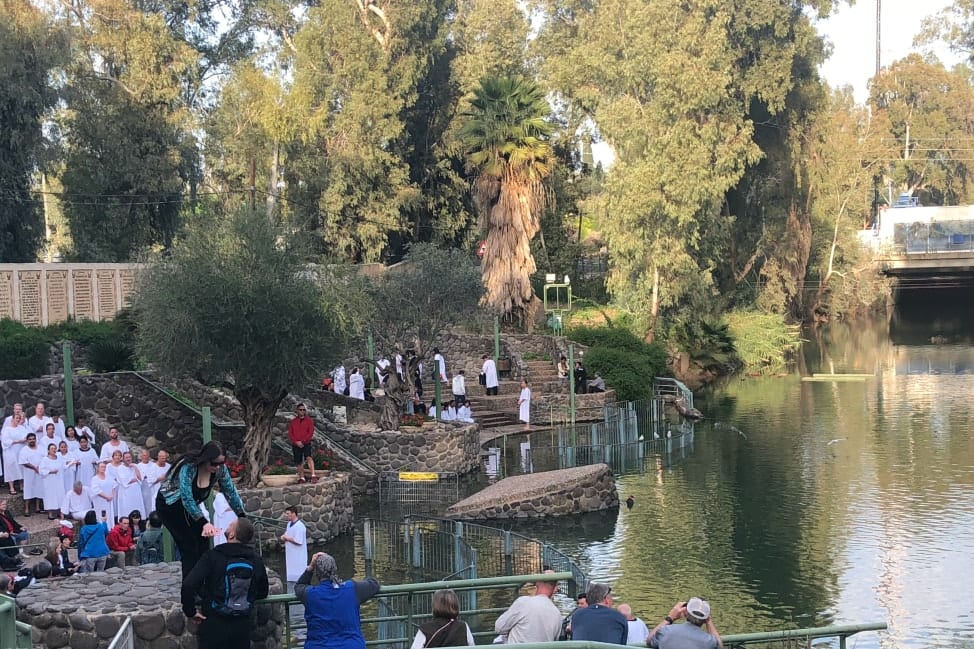 Today, people from all around the world come to Israel to get dunked and profess their faith publicly. Both Alex and I have been baptized before, but there is just something extra special about being baptized in the same river as Jesus.

3. Get Inked at the World’s Oldest Tattoo Shop

From baptism to the tattoo shop… is this the most polarizing list of things to do in Israel that anyone’s ever compiled?

Tucked away in the Old City of Jerusalem is world famous Razzouk Tattoo. The Razzouk family has been tattooing folks for more than 700 years – WHOA! The Razzouks came to Jerusalem from Egypt in the late 19th century, bringing dozens of antique stencil blocks with traditional designs. Today, customers can choose designs from those same blocks and get the same tattoos past pilgrims received.

Pilgrims would get tattoos with the date to commemorate their journey to the Holy Land. If they returned, they would add the date of that year as well. Last year, our mom traveled to Israel and got a tattoo from the Razzouk family, so it made sense that Alex and I would do the same.

The family that gets tatted together, stays together, as they say. 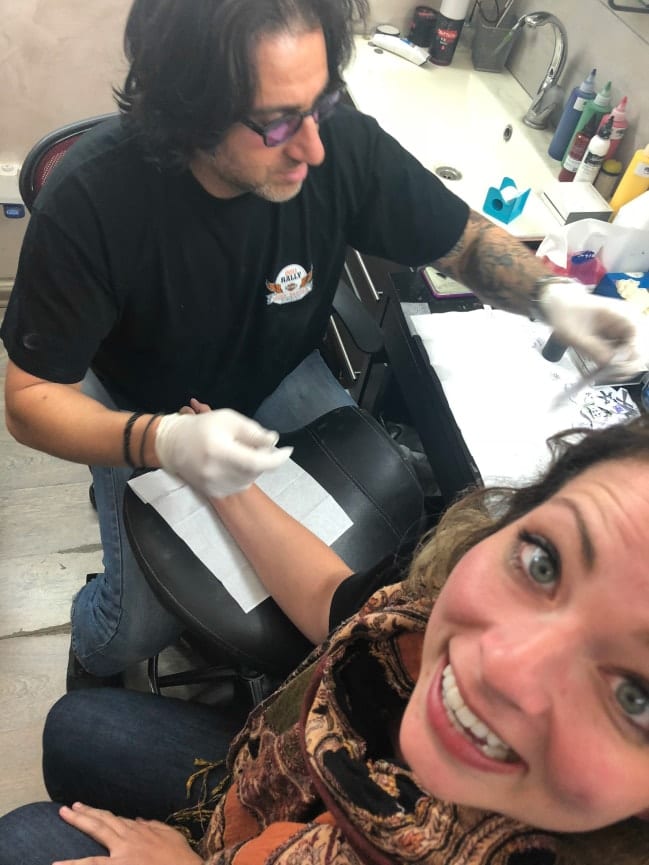 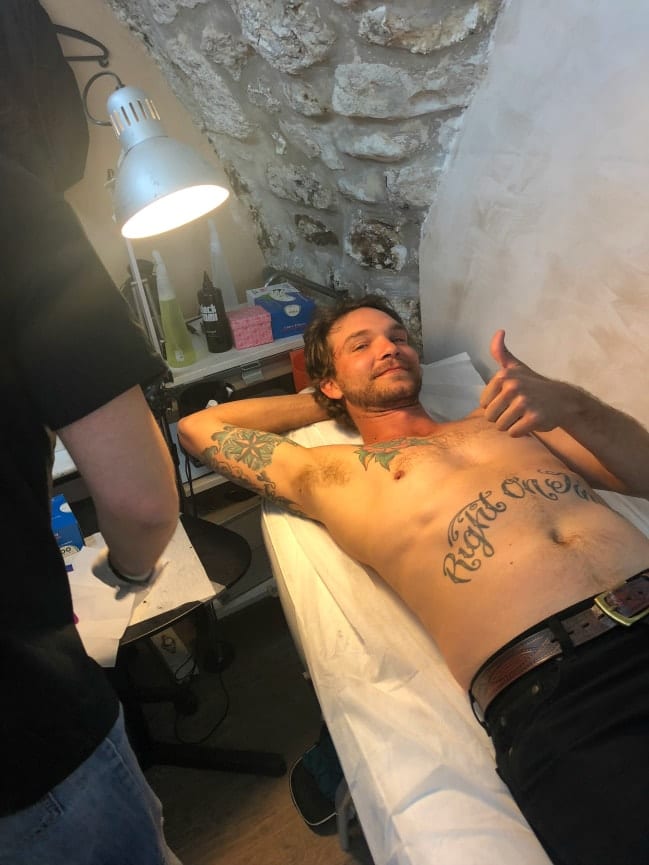 And because Alex is the best big brother, he let me choose which matching tattoo we’d get. I picked the Ichthys – also known as the Jesus fish. Alex, already a big fan of tattoos, was so into the ancient blocks that he got the Jerusalem cross, too. Maybe I’ll get that on my return trip. 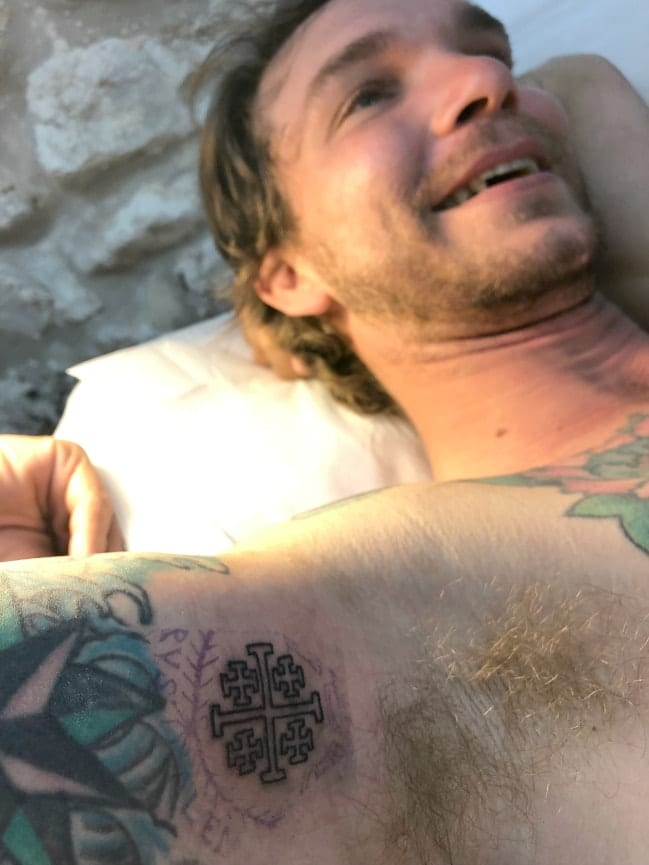 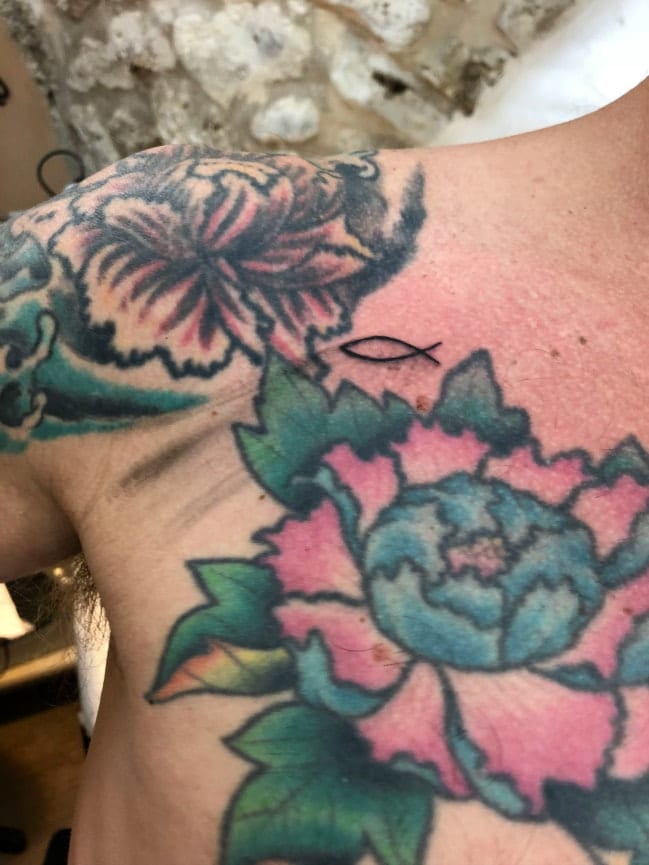 This was my first tattoo ever and I am THRILLED with it. Every time I see it, I think of this trip and am reminded of  God’s unfailing, unconditional love for me.

In the 8th century B.C.E., King Hezekiah needed to protect the water source in Jerusalem from the fast approaching Assyrian army. By creating a 1,750-foot underground tunnel system, he diverted the water source deep into the city.

Today, trekking through Hezekiah’s Tunnel in knee-high water is a must-do when visiting Jerusalem. But be sure to bring a headlight and water shoes. This 30-45 minute walk through a pitch black, shoulder width tunnel is NOT for the claustrophobic, but it is one of the neatest things to do in Israel. 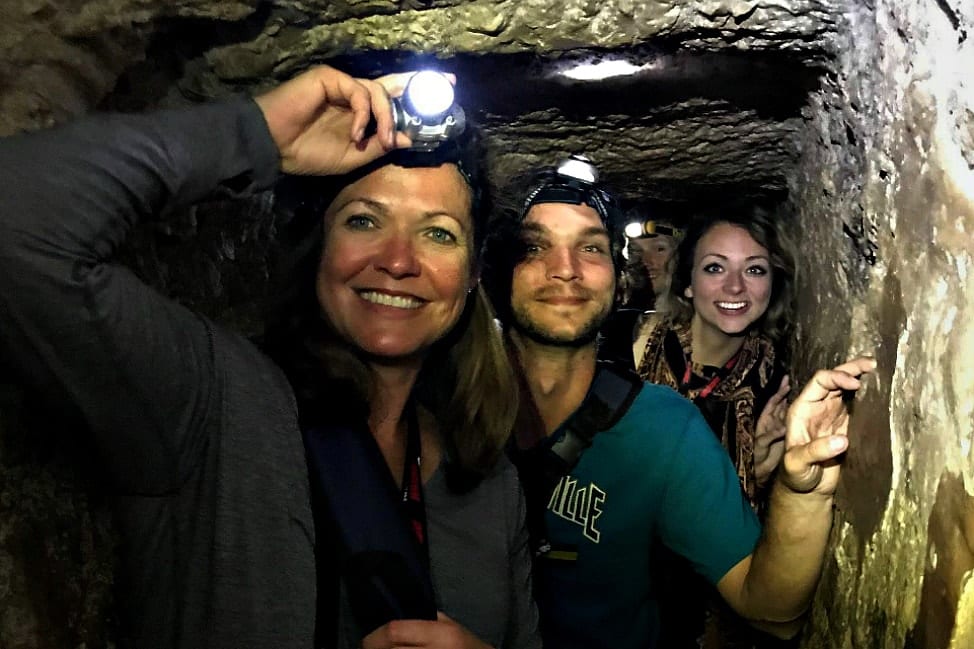 At one point we turned off our lights and felt our way through the pitch black tunnel. Alex was the first one to turn his light back on because he is a huge chicken.

It’s all fun and games until you really get down to the reason Jerusalem is called the Holy City. And a list of things to do in Israel wouldn’t be complete without a visit to the Western Wall. 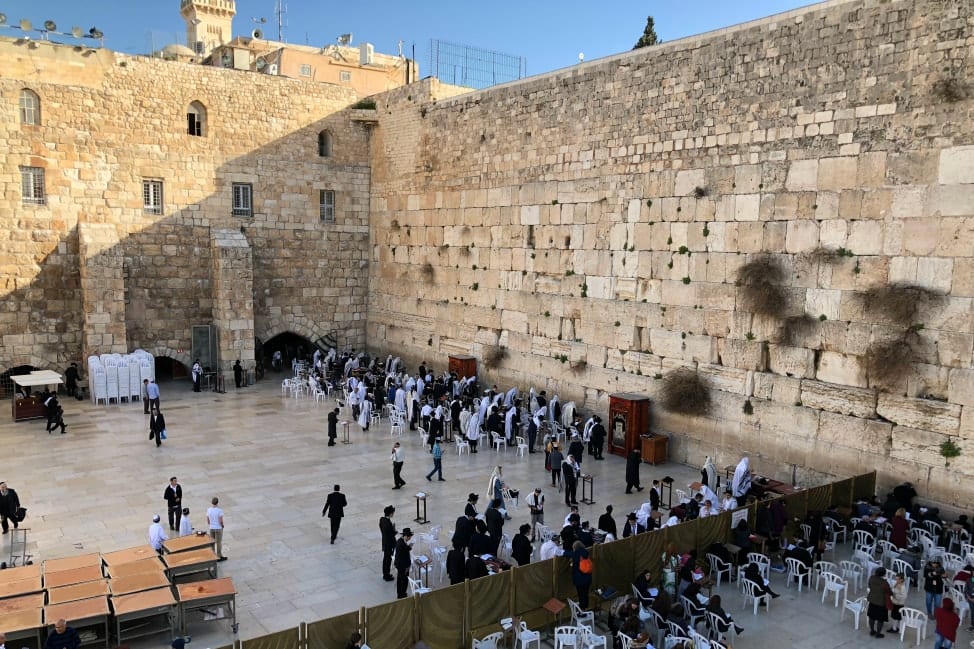 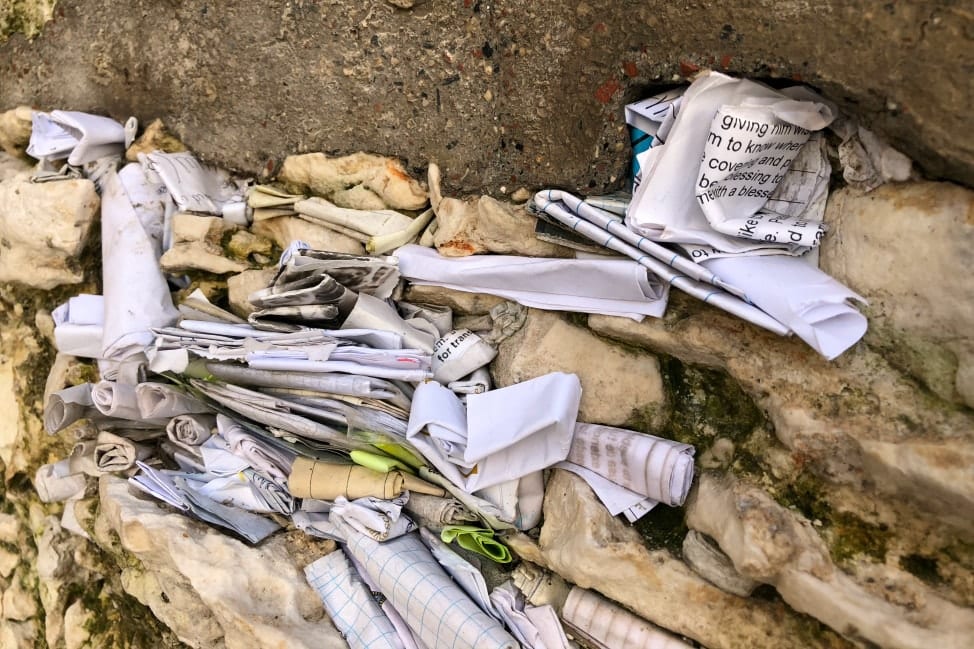 Prayers tucked in the cracks of the Western Wall

The wall today marks the literal boundary between Jews and Muslims throughout the Middle East. Men & women are also divided at the Western Wall. Men and married women are expected to cover their heads upon approaching the wall, and to dress conservatively. When departing, the custom is to walk backwards to show respect for the sanctity of the place.

6. Cruise on the Sea of Galilee

I wanted to add “walking on water” to my list of things to do in Israel, but as it turns out, that miracle is no longer in service.

Instead, we sailed at sunset for an evening of worship and teaching with the Sea of Galilee Worship Boats. For me, it was mind-blowing to sit in the middle of the sea where Jesus walked on water and where the disciples spent their time fishing. Even if you’re not religious, it’s still a must-do. 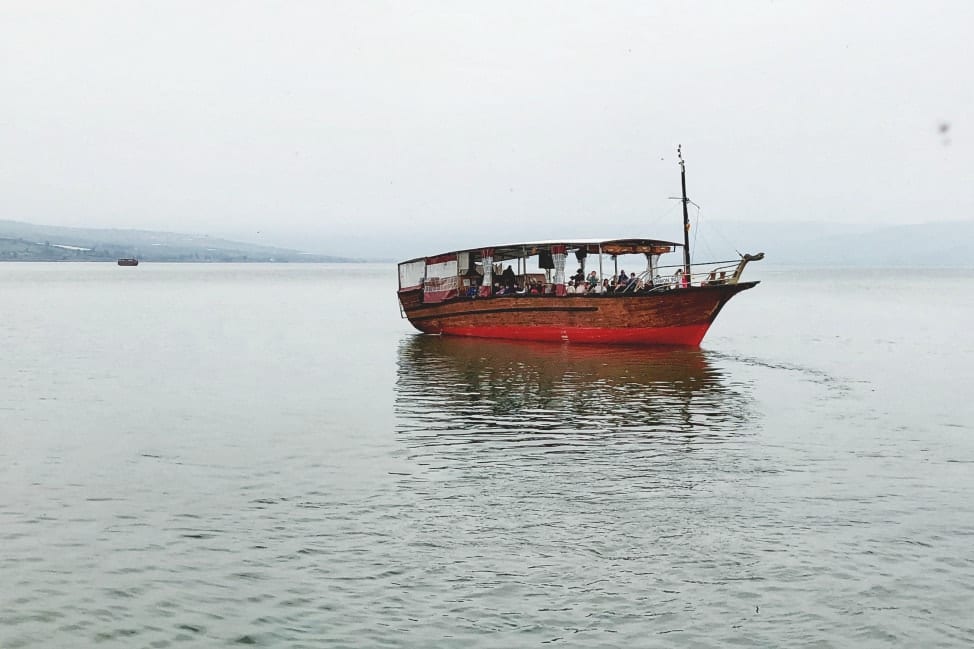 Would you swim in the Dead Sea or get a tattoo from Razzouks? Did I miss any other must-do activities in Israel? Let me know in the comments! 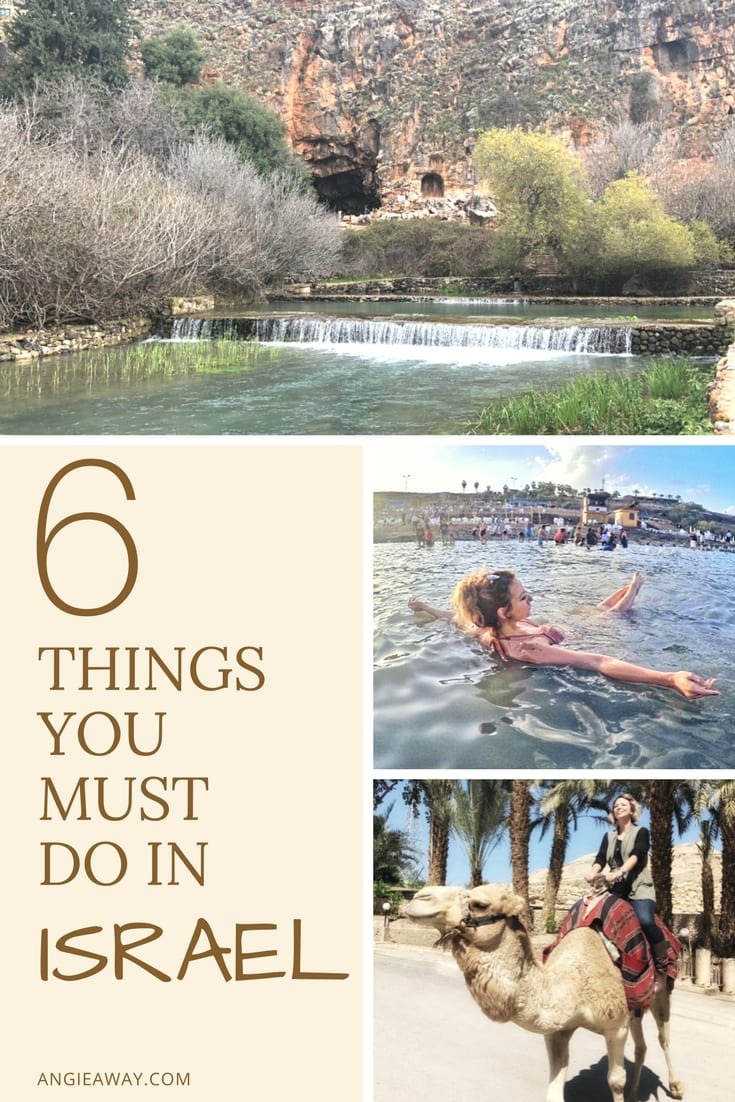 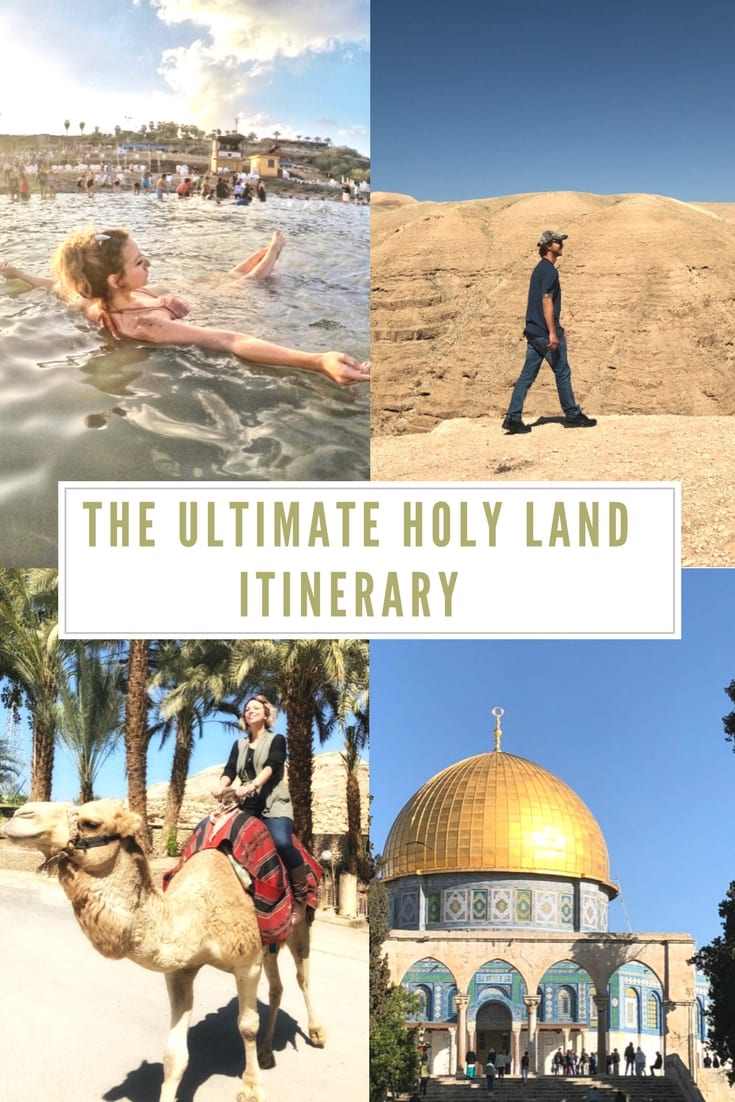