Since I officially moved back to Jacksonville with the signing of my lease and the purchasing of my car, I confess I’ve taken any opportunity to escape to points afar… as my recent trips to Australia & the Dominican Republic will attest. Despite feeding that unquenchable wanderlust here and there, I have made a commitment to myself to explore my new (old) hometown and surrounding areas with the discerning eyes of a seasoned traveler.

Much to my delight, I have not been disappointed!

A few months back, a dear high school friend got married in Amelia Island, Florida, just a 45-minute drive north from central Jacksonville. Imagine my shock when I realized that all my life, lovely little Amelia has been overshadowed by an older, seemingly more historic sister to the south – the Spanish colonial town of St. Augustine. I just love small towns like this!

Until my visit to Amelia, I never realized just how much of the First Coast’s history was tied up north of Jacksonville, so I decided to make my way back for a weekend in Amelia Island/Fernandina Beach as soon as possible to explore a side of this region I’ve never fully appreciated. 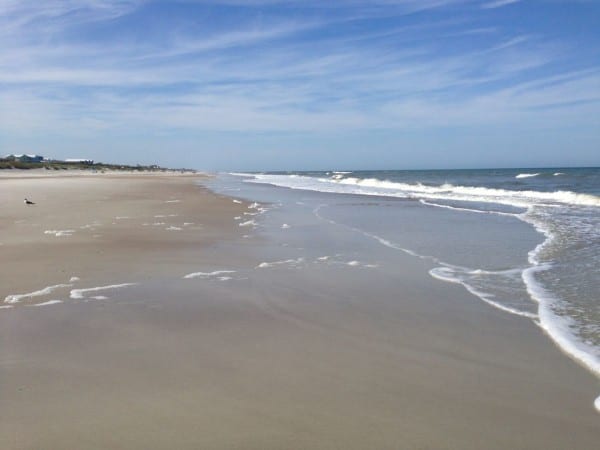 For many, the main draw of Amelia Island is a 12-mile stretch of sand – the famous Fernandina Beach. It seems to go on forever, dotted with surf shops, B&Bs and yummy restaurants all along the coast. As a North Florida native, the beach doesn’t look much different than what you’d find in Jacksonville proper, though it may be a little more rugged and a little less crowded. It most definitely has a different vibe than Jacksonville Beach.

The whole island has a small-town, everybody-knows-everybody feel, something you don’t really find in sprawling Jacksonville.

While the beaches are lovely, Amelia Island’s main historic claim to fame is its nickname, “The Isle of 8 Flags.”

Since 1562, eight entities have flown flags over Amelia – France, Spain, Great Britain, the Patriots of Amelia Island, the Green Cross of Florida, Mexico, the Confederate States of America and finally, the United States. I learned how each flag came to fly over the island from Barbara, a docent at the Amelia Island Museum of History. Whether you’re a history buff or not, make time to take the daily Eight Flags Tour. There’s so much to learn about this little island!

Since Amelia Island is the only municipality in the whole US to have lived under the reign of eight different flags, you may wonder what makes it so desirable. As with any chunk of real estate, it’s usually all about location, location, location!

Amelia Island sits at the mouth of the St. Mary’s River and the Cumberland Sound on the very border of Florida and Georgia. While those coordinates alone made the area a hotspot during the Civil War especially, the harbor’s naturally deep waters are what initially drew traders and ships to the port. Back in the days before dredging, Amelia Island had the deepest natural harbor in the northern hemisphere, welcoming 300-400 ships per day who came to pick up and drop off cargo.

Ports have ships and ships have sailors. And what do sailors bring? Shenanigans! (At least that’s what I heard!) In Amelia Island’s heyday, you could walk down the street and meet smugglers, hustlers, gamblers, hookers, pirates and bootleggers. It was one heckuva harbor town!

If not for my visit to the history museum, I wouldn’t have a clue that this sweet small town had a wild past. When you stop for brunch at the Salty Pelican or grab a fish burger at Slider’s Seaside Grill on the beach (where my Dad’s band used to play when I was a kid!) or The Surf across the way, all you see is a gentle paced crowd of sunburned visitors and residents, mingling over fried green tomatoes or fried oysters eggs Benedict or the town specialty – shrimp! You’d never expect the streets were once full of a wild bunch of frontier profiteers.

After the tug-of-war for Amelia Island ownership, and as deepwater harbors were dredged up and down the East Coast of the US, Amelia Island had to reinvent itself. Ultimately, this once bustling town fell asleep for a bit, waking up centuries later to become the birthplace of the modern shrimping industry. Though I just missed it in 2013, for the past 50 years the island hosts its annual Shrimp Festival in May. Now that I’ve had a taste of what Amelia Island is all about, you can bet I’ll be back for the big event in 2014!

Check out some of my other Amelia Island Highlights over on AFAR.com!

During my trip, I was hosted by the Residence Inn Marriott Amelia Island. Clean, safe, quiet and close to everything, the Residence Inn is a great choice if you’re popping in for a long weekend or an extended stay. I had a King Studio, which as I understand is one of the smaller rooms, and it was plenty big! There was a nicely stocked kitchen, large living area, rotating flat screen tv and a bed with a view over the beautiful pool, hot tub and fire pit area. My only complaint about this particular room was the tiny bathroom, but you can’t win ’em all! The staff was excellent and extremely helpful in providing directions and recommendations on where to eat, and there was a free shuttle during the day to pop guests down to the beach or into the main town. And there was a very nice breakfast buffet available in the morning with bacon, sausage, eggs, cereal, waffles, etc. Thanks to the Amelia Island Tourist Development Council for hosting me and providing tips on where to stay, what to eat and what to see. All opinions, as always, are my own!

5 thoughts on “Amelia Island: Getting to Know My New Neighbor”