Why does a world traveling nomad need a car?

That’s a good question, and one I’ve been asked umpteen times since I announced my very exciting car purchase yesterday on Twitter. It’s no secret that I’m ready to travel just a bit less in 2013. In 2011 & 2012, I visited some 30+ countries, and that was enough to last a lifetime. (Though, in my current state of wanderlust, I know it won’t!)

First things first. My wanderlust is getting the best of me this week. It’s been a month since I’ve been on a plane or slept in a hotel, and I am about to crawl out of my skin. I’m not sleeping, I’m itchy and I’m literally 3 seconds away from flying to anywhere.

I think that’s why this week, everything finally came to a point. On a whim, I became a redhead and almost as whimsically, I bought the very first car I ever test drove. WHAT?!

You can imagine how challenging it’s been to share a car with my mom & sister anytime I’m at home between adventures. Since most of my current projects allow me to work out of the house, I am always 3rd man on the totem pole when it comes to car priority. And this nomad needs to get out more! (Sometimes I just need a chai latte from Starbucks, you know?)

On top of that, my much younger little sister sort of got the raw end of the deal in that no one really planned on her growing up. We sort of forgot about things like cars and college funds, etc. And since my grandparents are champions and made my whole life by buying me a new car my senior year of high school, I wanted to pay that kindness forward by hooking up little sis in return.

I decided to save the cents I earned over the past 6 months for a semi-decent used car that would cart The Jet Sisters around for the foreseeable future. What I didn’t bargain on was finding absolutely the perfect car, the perfect color and the perfect price. 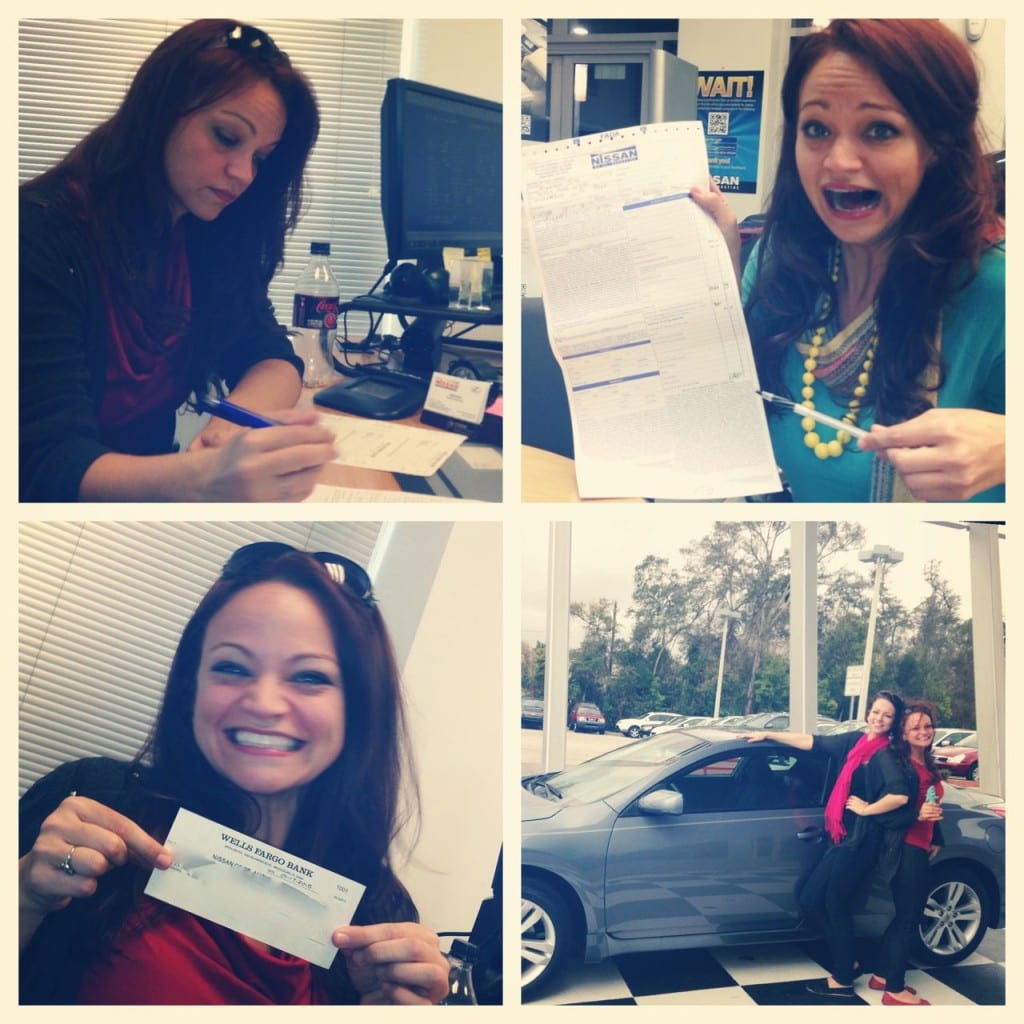 As RaeRae and I waffled over purchasing the car on Wednesday night – frankly, it was more than I’d planned to spend  – we also danced and made our typical ruckus at the dealership, so luckily, our Nissan dealer James couldn’t have been a better fit. RaeRae and I had so much fun with him that A. we bought the first car we test drove and B. we couldn’t wait to get back to the dealership the next morning to hang out and shoot the breeze. I’m happy I was able to buy a car from him. 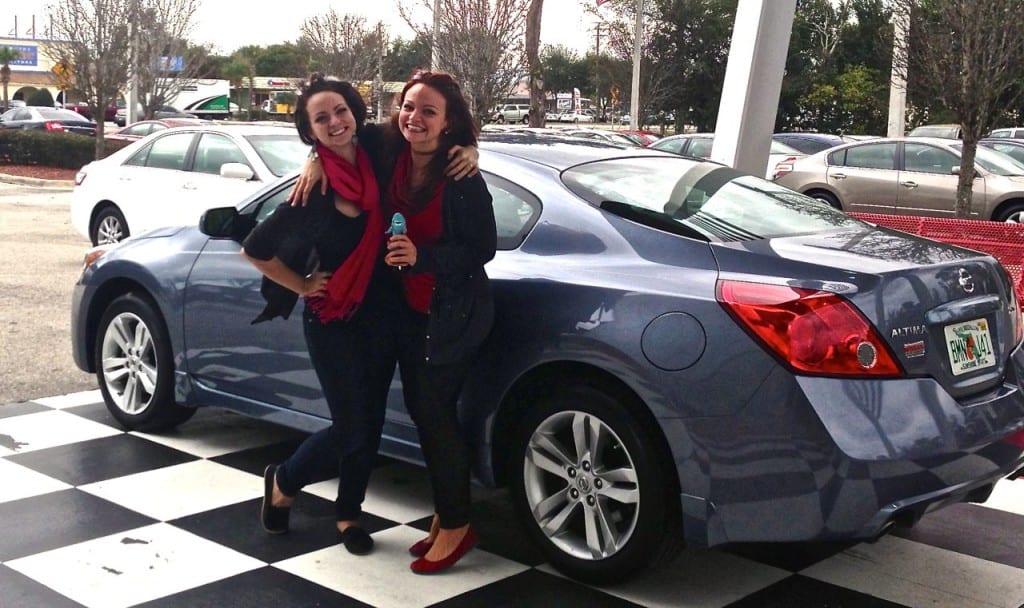 During our test drive, we realized a few things.

A. The first thing either of us noticed was the audio input for our iPods. We were pretty much sold from that moment.

B. We had the car in the wrong gear for about 5 miles. Whoops.

C. When I asked what we should name this car if we purchased it, and we both looked at each other and said, “Sheila the Shark,” in honor of our dear sweet old gray dog who passed away last year, and of course in honor of awesome sharks everywhere, we pretty much knew we were gonna drive that baby home.

There was a lot of high-fiving and making it rain.

“RACHEL. IF YOU DON’T PICK UP YOUR CRAP I’M GOING TO SIT ON YOUR HEAD UNTIL YOU PASS OUT!”

Here’s the contract we drew up yesterday while sitting with James at St. Augustine Nissan.

And I agreed not to always call it “My Car.” That’s a tough one. Something about spending quite a few thousand dollars in one day has me feeling a bit possessive. 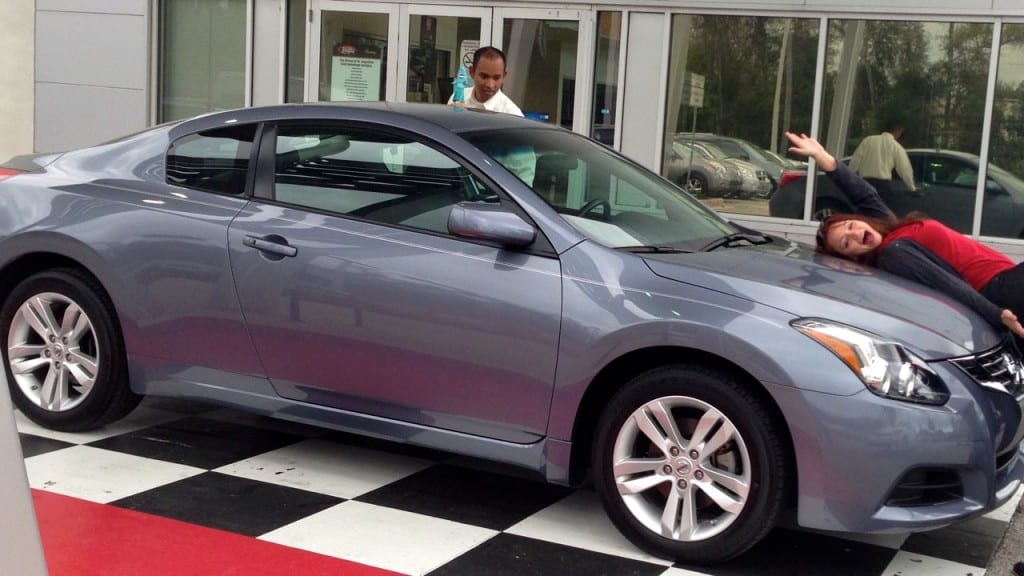 I’ve only driven Sheila once since I brought her home last night, but rest assured, RaeRae is getting my money’s worth. Perhaps I’ll get to drive her later?

RaeRae and I have been tentatively plotting an epic USA road trip for several years, complete with dashboard cam and enough jumping photos to rock your socks off, so now that we have Sheila, it looks like the stars might just align for this summer.

Can you imagine us two crazy kids on the open road? Checking out deserts out west? Eating 40-oz. cheeseburgers in greasy diners? Getting our kicks on Route 66?!? The possibilities are endless!

Get ready. This nomad is still in the game!

If you happen to be in N. Florida and in the market for a car, go talk to James at St. Augustine Nissan. He’s AWESOME!

15 thoughts on “Why Does a World Traveling Nomad Need a Car?”