Searching for Respite in Switzerland

After what seemed like a smorgasbord of eating and socializing in Venice, Rome, Umbria and Bologna, I’d just about had my fill of the grandness and decadance of Italy… at least for the moment. The introvert I desperately try to keep hidden was starting to make her cranky self known, so I realized it was time for me to go somewhere all by myself to clear my head before my next group adventure in Spain weeks later. I had several legs left on my Eurail pass, so I decided to try out a new country and some new scenery.

The train trip from Milan to Lausanne, Switzerland, was incredibly scenic, and I could only resist the touristy temptation to snap pics of the snow-covered peaks for so long as the train chugged between the mountain passes of the Alps. If you ever get the chance to take that route via train, do it!

The go-go-go nature of the previous three weeks left me craving more than just solitude to recharge my batteries – I also just wanted to sleep and relax. And what better place to do that than a couple of spas on the shore of Lake Geneva?

My view from the Lausanne Palace & Spa

I was fortunate to find two elegant sister hotels, one in bustling Lausanne, headquarters of the International Olympic Committee, and one just a few train stops away in quiet Vevey, with everything I needed for my decompression retreat – spas, food and copious Swiss chocolate. I first stayed at the Lausanne Palace & Spa, an ornate, 5-star affair built in 1915 and perched atop an exasperating hill (take a taxi from the station – it’s farther than it looks!). As you would expect, I enjoyed all the comforts of complete quiet and ultra luxury overlooking the town and Lake Geneva.

Lake Geneva from my balcony at Lausanne Palace

A few days later, after exploring Lausanne just a bit and eating nothing but rich crepes both savory and sweet, I took the train to Vevey and made my way from the station, past cute streets and boutiques, to the Hotel des Trois Couronnes, or the Hotel of Three Crowns.

Vevey is a gorgeous, quaint little lake spot, but the claim to fame that drew me in was its status as the birthplace of milk chocolate.  Nestle, founded here in 1867, is still headquartered nearby. So much for calorie detox!

Taking a walk on the lake’s edge

I didn’t spend as much time as you might think in the spas at my two historic hotels. As with just about everything in Switzerland, prices for spa treatments were more appropriate for bankers on holiday – not bloggers. So I took advantage of the free hot tubs and steam rooms, but bypassed massages and facials.

Slippers and a sweeping view of Lake Geneva & the Alps – who needs a massage?

Vevey fact: it was once home to Charlie Chaplin and is currently the site of the Alimentarium – the original site of Nestle’s administrative offices and now a food museum

When it’s time for introverted Angie to recharge and decompress, I tend to hole up in my hotel room or a café to catch up on work and when I need a break from that, I wander. For hours. And hours.

And Vevey was the perfect place for wandering, as there’s a miles-long path right on the water, complete with crepe stands, a vintage carousel and some bright spring blooms just opening up.

Lake Geneva in the springtime

I appreciated being able to speak French with the locals while ordering food and asking questions of the concierge – one never quite expects the mental exhaustion that comes with being in a country where you don’t speak the language until you’ve actually been there a while – so just being able to converse comfortably was a respite in and of itself.

Swept up in clouds & peaks

A hint of a rainbow

Though most of my time in Switzerland was spent focusing on the art of chilling out, I did manage to fit in one legitimate activity – a boat cruise around Lake Geneva. The weather was perfect for sitting on the bow and taking in every pretty lakeside town and every dramatic shift in Alpine cloud cover.

A pretty town on the French side of Lake Geneva

Snowy peaks in all directions, crisp spring air, bright sunshine and a leisurely pace made Switzerland one of the most relaxing stops on my Eurail-sponsored Tour d’Europe.

And though my retreat to Switzerland didn’t yield any wild adventures, hilarious stories, fascinating historical discoveries or even new friends – it brought me what I needed at the time. Rest. Relaxation.

Special thanks to the Hotel des Trois Couronnes and the Lausanne Palace & Spa for hosting me on my Italian detox. As always, opinions are my own.

Emilia-Romagna in 4 Words
Drama at the St. Augustine La Quinta — @LQ
SHARE AWAY
JUMP TO COMMENTS 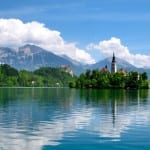 Reflections from the Road | Vol. 9