If you’ve been following along with the adventures of Angie Away for any length of time, you might be aware that hiking is never, ever at the top of my bucket list. Instead it often happens that I’m peer pressured into it, as was the case with the epic Tongariro Crossing in New Zealand and the overnight jaunt to Mt. Sinai in Egypt. I rarely enjoy the actual act of hiking; it’s only in hindsight, with a few weeks between me and the pain, that I can finally appreciate the experience in full.

That’s why it defies reason that I would do the Hanakapiai Falls Trail on Kauai… again! 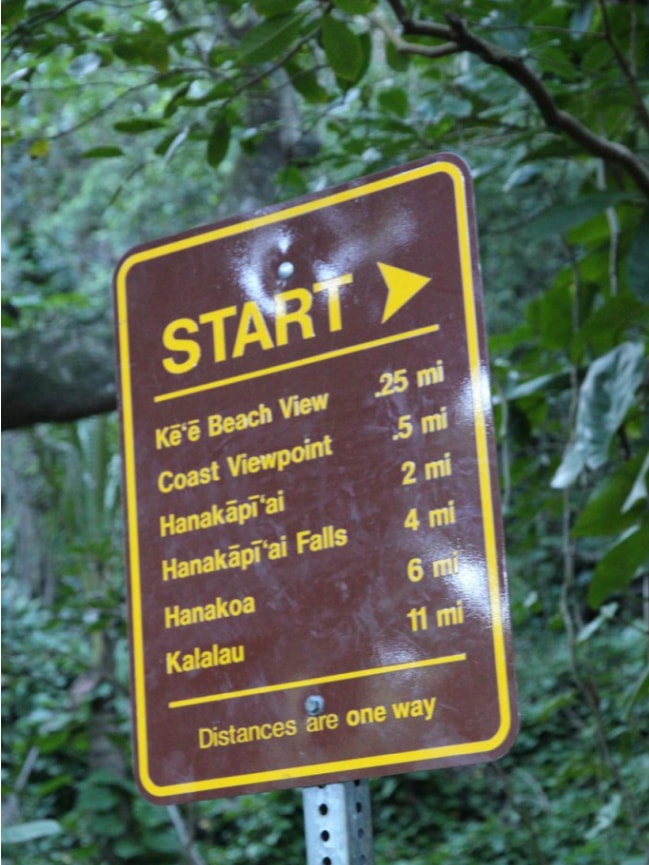 That’s right, again. It’s my second time attacking this hike, which the Sierra Club ranks as one of the world’s most challenging. Peer pressure and sibling rivalry always seem to get me, as my little brother all but told me I HAD to do the hike this year. In 2008, after we completed the 8 mile quest the first time, I famously said, “You know, I’m glad we did that, but I’m NEVER doing it again.” 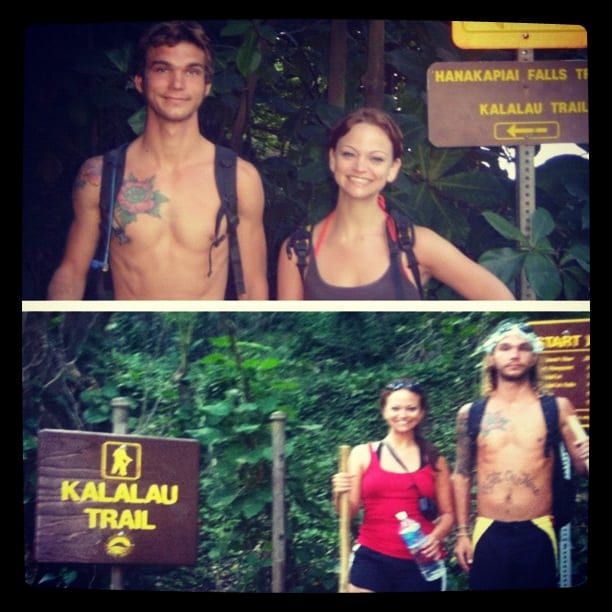 Fast forward four years and there I was, at the beginning of the trail, muttering under my breath about just how much I was going to hate every moment of it. Stupid waterfalls…

Nine minutes of uphill climbing later, I was lamenting how it had only been 9 minutes.

Speaking of hiking partners, the whole reason I agreed to attempt the Hanakapiai Trail once more is because two of our friends from home have joined us in Kauai and it’s only fair to show them as much of the island as possible. But I don’t have to like it… 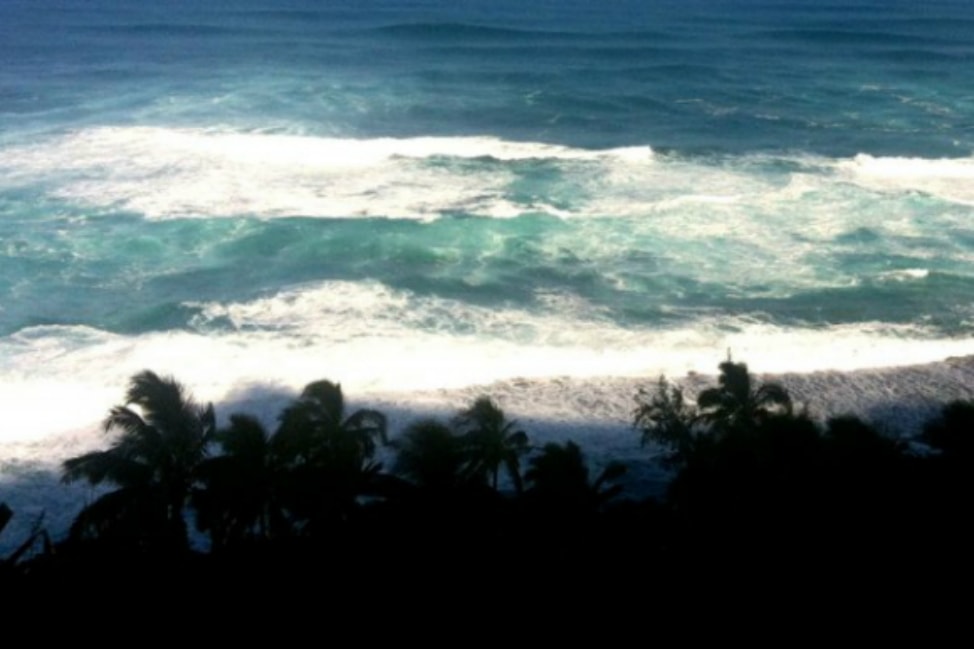 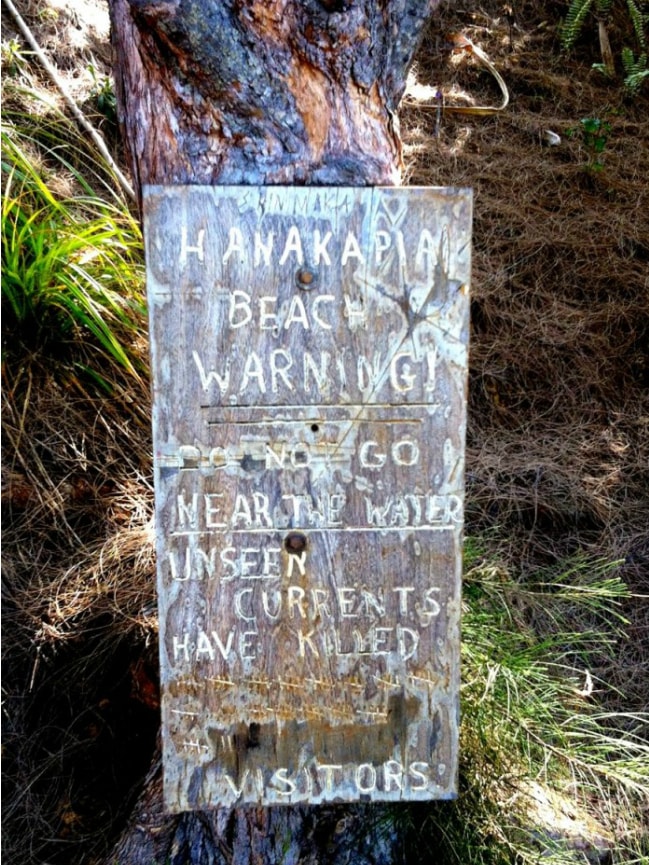 Fortunately, I was able to convince my brother NOT to hike the whole Kalalau Trail – a daunting 22 mile round trip that includes an overnight campout. Instead, we opted for the Hanakapiai Trail, the first section of the larger journey, which diverts up to a beautiful waterfall. 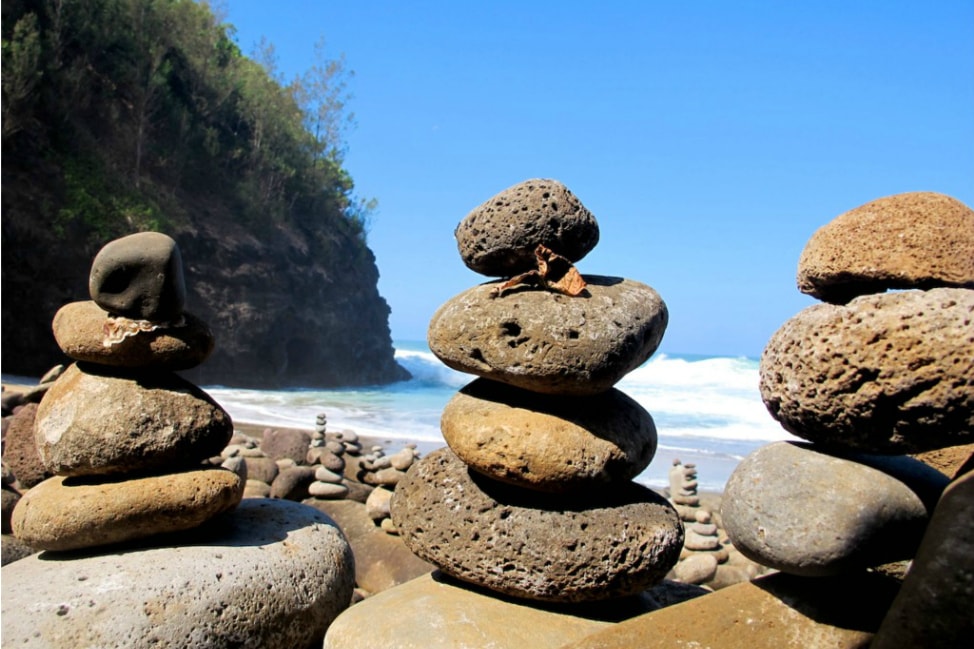 The hike is split into four parts – 2 miles of up-and-down cliff path to Hanakapiai Beach, a treacherous beach you shouldn’t even think of swimming in; 2 miles inland through rocks, river & jungle to the towering Hanakapiai Falls and their freezing pool below; and then the reverse back to the trail head. 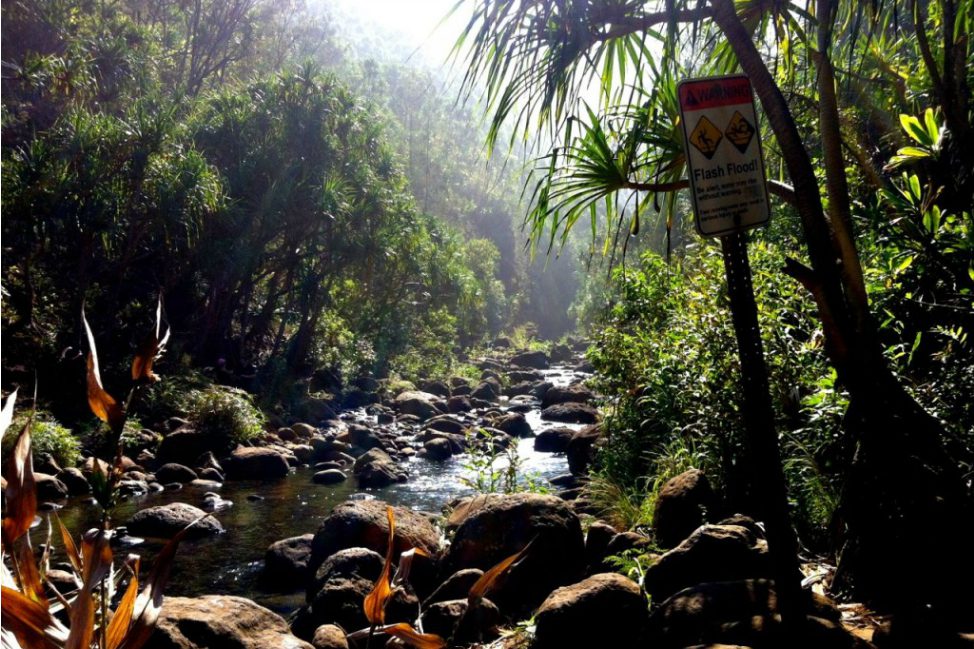 The trail may be tough, but the payoff is most definitely worth it.

As you near the falls, the temperature begins to drop from 90 to about 65 degrees – it’s downright chilly – but it feels like heaven after the 4 miles you’ve just hoofed through the jungle. 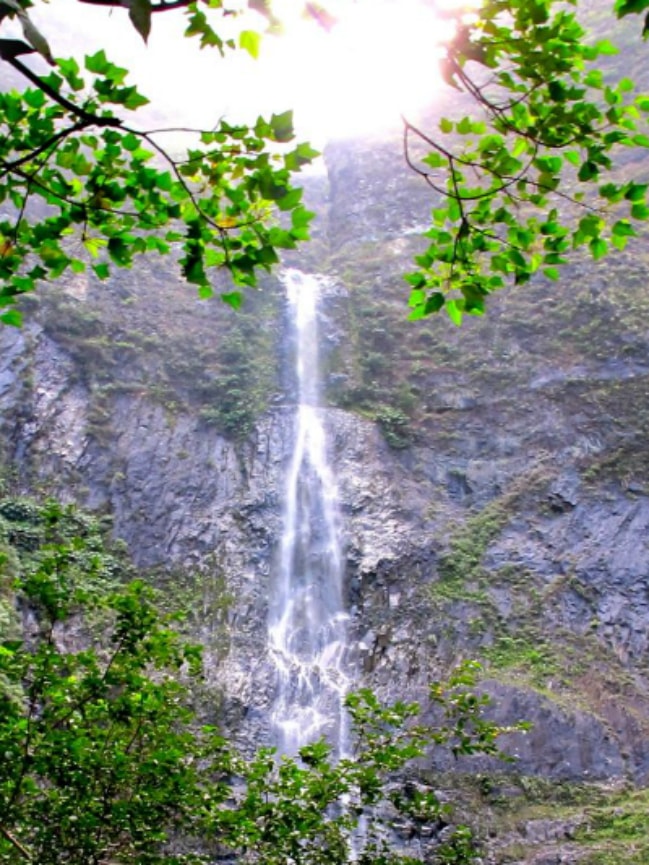 I remember thinking how much easier this Hanakapiai Trail hike had been this second time. Perhaps it was because Kauai has been unseasonably dry, thus I wasn’t sliding all over the place like the first time; but also, I think my experiences in New Zealand and Egypt helped put things in perspective. 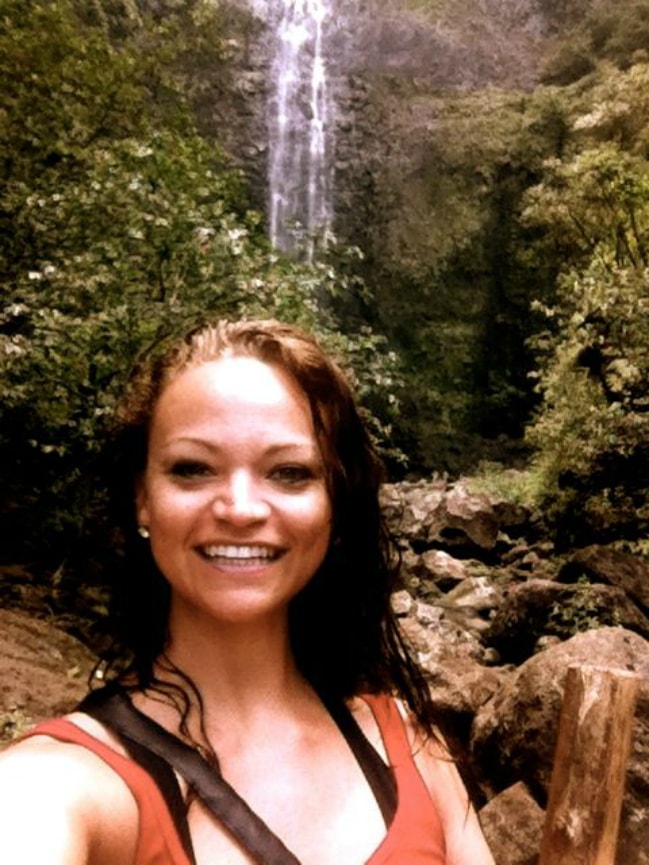 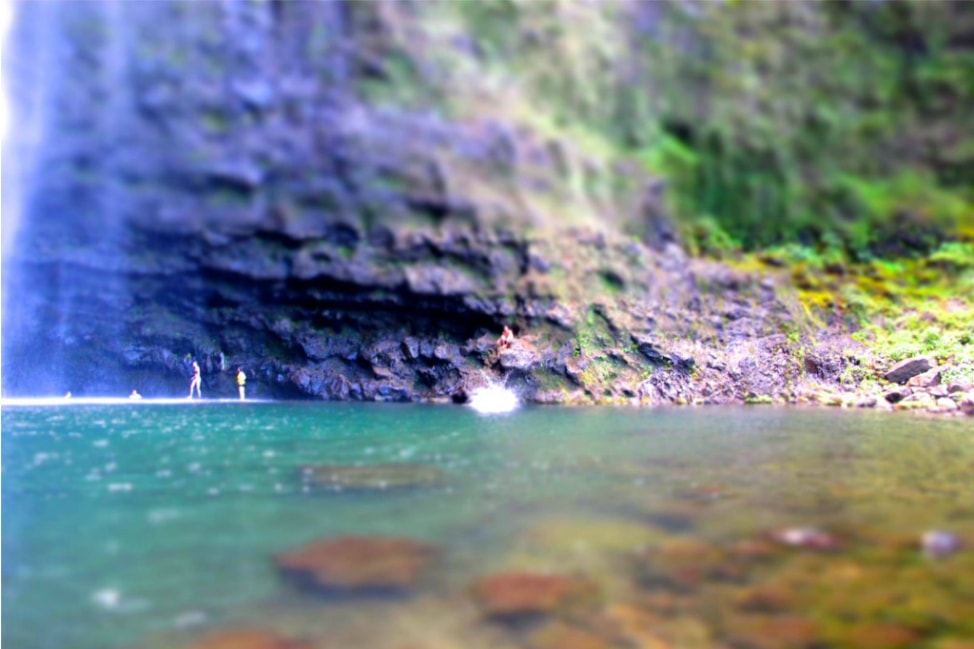 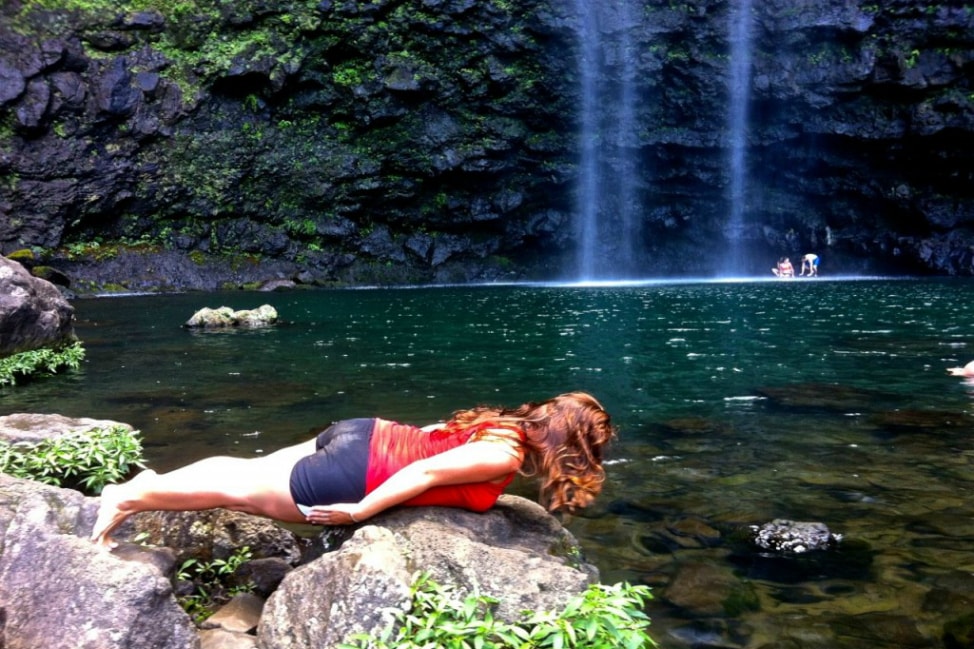 After a dip in the ice cold pool below the falls, and a break to soak our feet, eat clementines & trail mix and polish off almost all of our water supply, it was time to head back. We were making good time and should’ve been able to get back to our condo right on schedule. After all, our friend Cathy had a flight to catch that evening, and she still had to shower, pack and drive all the way to Lihue.

I don’t know if we’d dehydrated our brain cells to the point of delirium at this point, but somehow, we all agreed it would be much faster if we left the Hanakapiai Trail on the way back from the waterfall and instead, hopped from rock to rock in the actual river itself. It seemed easy enough – we’re all relatively young & spry – and wouldn’t a straight line to the ocean be faster than a meandering jungle path?

It was one of the dumbest ideas ever. 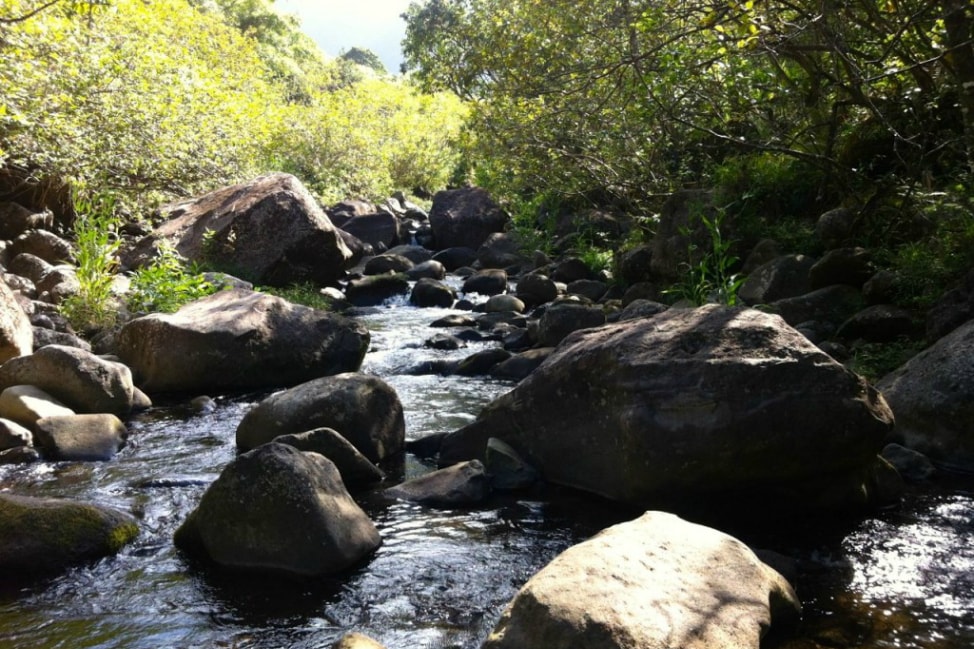 Hopping from small, pleasant rock to rock was only possible here and there; the majority of the experience included scrambling up and over giant boulders and bushwhacking – literally, bushwhacking! I whacked at bushes! And they whacked me back. – in the jungle to make our way down.

There were many times when I’m sure it looked like I was playing Twister – right hand on large boulder, left foot on small, moss-covered rock, walking stick in left hand pressed into riverbed… I fell a few times, and Cathy twisted both her arms pretty painfully, but no one smashed their head on a rock – miraculously enough.

After we’d already lost sight of the Hanakapiai Trail, we realized what a bad decision it had been, but we couldn’t turn back up river to start over. We had to keep going and hope that the trail crossed the river once more.

It never did… that is, until we reached the ocean four hours later.

In the meantime, Cathy & I both fell into the drink multiple times, soaking our tennis shoes and making it too slippery to jump from rock to rock anymore. If not for our walking sticks, I can’t say we would’ve made it out before dark – real talk.

(Oh, and I ripped my running shorts clear up the back seam. So you’re welcome, everyone who was walking behind me… )

Once we found the path again, we still had another 90 minutes of hot hiking on the cliff path, and the uphill portions were absolute torture after the insane river rock adventure we’d just had.

Instead of getting back to the car at 1:30 like we planned, in time for lunch, we finally dragged ourselves off the Na Pali Coast at 6 p.m. We looked like we’d done the 22 mile Kalalau Trail. 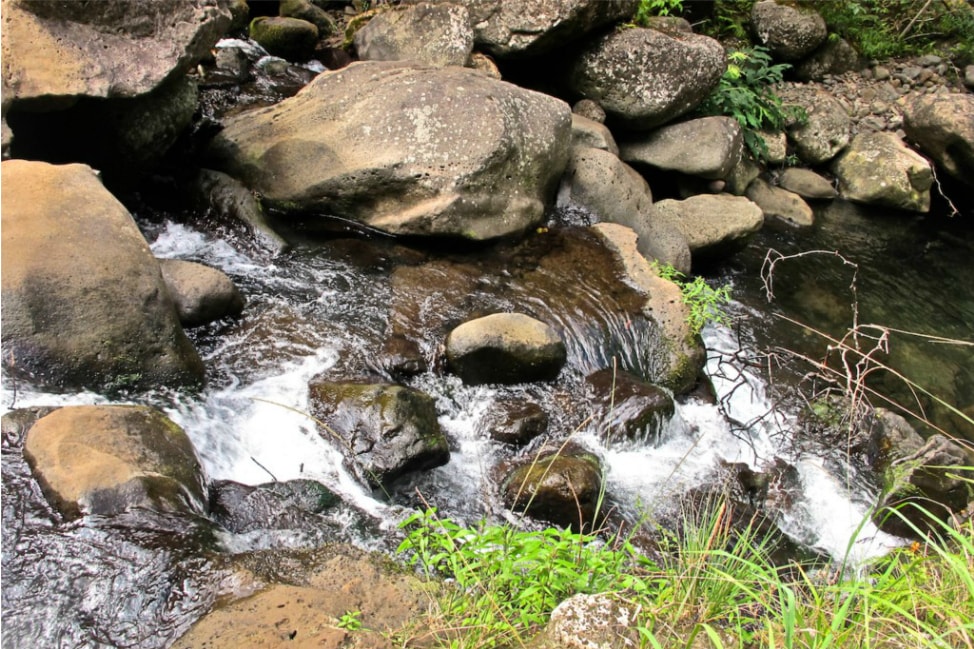 Completely bedraggled, starving, soaking wet, suffering from dehydration headaches and shaking, exhausted muscles, we made it back to our rented Nissan Versa, and left that stupid trail once and for all.

I am never doing it again. For real this time. 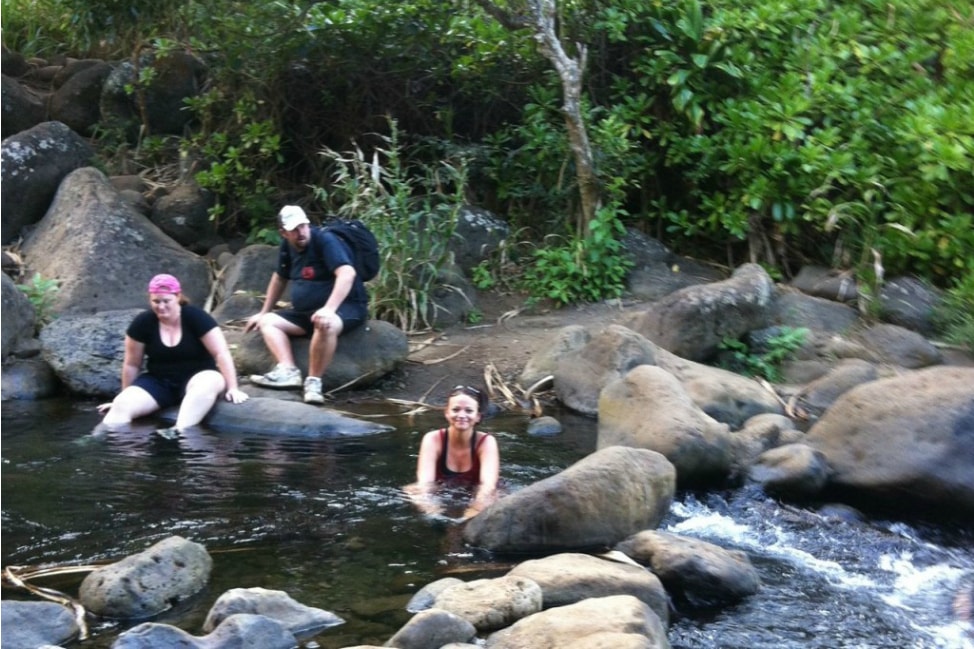 The day after the hike we all laughed at how our pictures look like a great time, but completely skip the treacherous parts and conveniently, the parts where I was shrieking, “I GIVE UP. I WANT OUT NOW!” 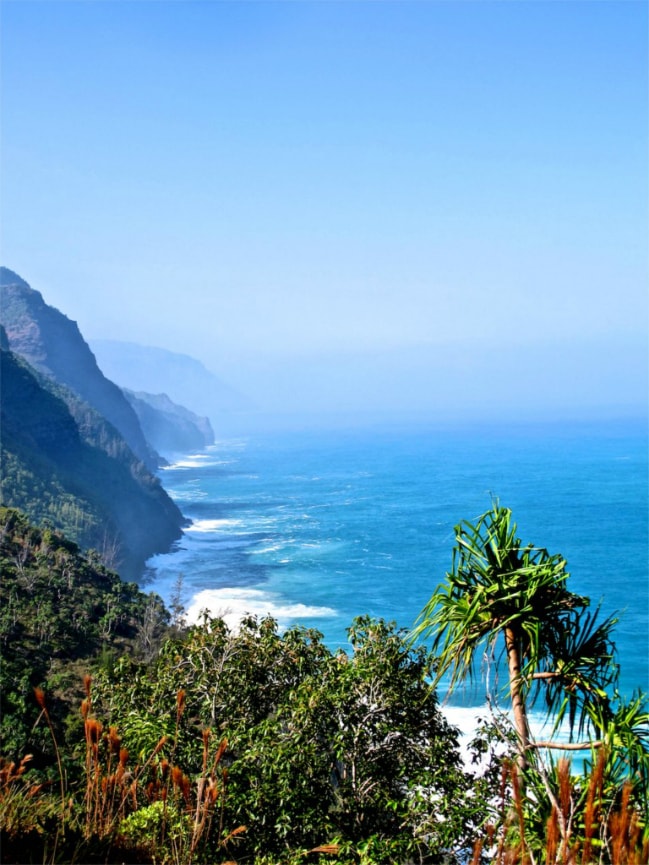 Tips for Hiking in Kauai on the Hanakapiai Fall Trail

Parking is a beast and all the good spots close to the trail head fill quickly. The last thing you want is to have to walk a mile before you even start the official hike. Shoot for a 7 a.m. start.

Whoops. We really botched this one. There is no food or water along the way, so you must plan ahead. We expected to be back at our condo by 3 p.m. and we didn’t get back until 7 p.m. We’d all run out of water hours and hours before. The last stretch nearly killed us. Don’t let that happen to you!

There’s a very good chance your feet will get wet as you cross the river multiple times on the way to and from the falls, so bring an extra pair of socks to change into when that happens.

Once I switched on my iPod to my Running playlist, I stopped noticing the time and managed to have a bit more fun.

I’m only 5’3″ and I can’t imagine doing this hike without a walking stick. I know others my size who have preferred to go sans stick, but I literally wouldn’t have made it without one!

I mean… I can’t believe I even have to say this. There were SO many people on the trail with babies – like, newborn babies. If I had a baby, the last place I’d bring it would be the slippery, steep cliff paths of the Na Pali Coast. There’s just no reason to put yourself or your kiddo in danger, and this hike is famous for the injuries it produces. Just last week, a young girl slipped and smashed her head on a rock, and had to be helicoptered out – that is, after she was dragged by her mom to a convenient spot. There’s no easy way out – if you get hurt badly, you’re really in trouble! If you have kiddos but are set on doing the hike, hire a local sitter – don’t subject your little nugget to the jungle.

On top of choosing the most difficult path possible, we were also hiking under the pressure of Cathy’s 9:30 p.m. flight. Don’t stress yourself out by saving the hike for the last day… it’s not worth it! 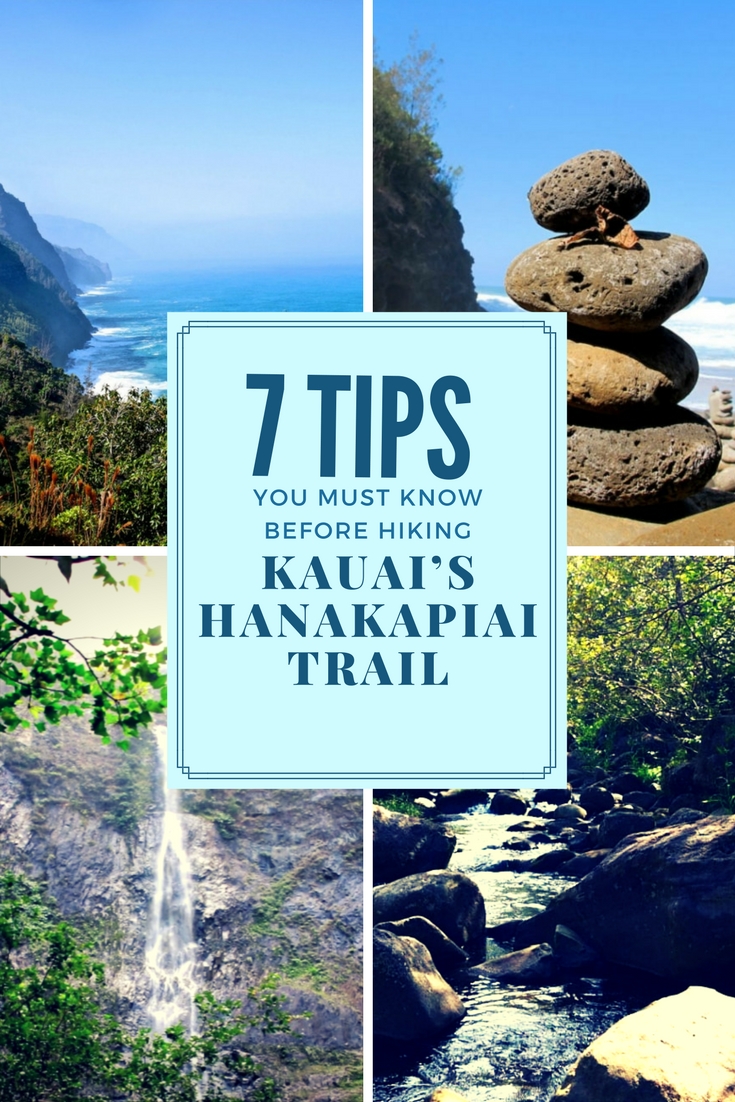