Thinking about attempting the 19.4 km Tongariro Crossing on your next trip to New Zealand? Even after all my whining? Good on you! Check out these tips for a successful day on the trail.

Access to the Tongariro Crossing is free, but you’ll need to have a shuttle to drop you at one end and pick you up from the other side. Shuttles start at $20 and often you’ll need to pay the driver in cash.

You may recall Hodgie and I did a hefty hike in Kauai a few years ago, so I used that experience as a benchmark to prepare myself physically and mentally for Tongariro. Tongariro isn’t all that bad, but it does take a while and if you’re out of shape at all, you will feel the pain. If you’re usually a couch potato, consider walking a few miles a day for a month in advance of attempting Tongariro. You won’t regret it!

In good conditions, the hike can take anywhere from about 5 hours if you’re really hoofing it, to 8 hours if you meander and stop to breathe on the tricky ascents in the first third of the trip. Budget even more time if you’re attempting to reach the additional peaks – though if you’re anything at all like me, you’d rather eat your own foot than add another ascent. I’d take my next vacation in Iraq before I tried hiking this trek in the winter, but braver folks have done it. 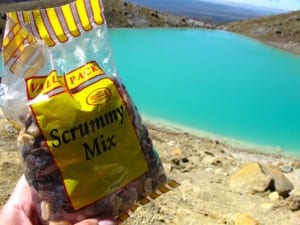 There is nowhere on the trek to refill water bottles, so take at least two liters if you’re hiking the main trail, and even more if you’re planning to summit Mount Ngauruhoe or Mount Tongariro. You will need it, even on cool days. Bring high-energy snacks like trail mix and cereal bars, a few pieces of fruit, and a sandwich or two. I always find I bring way more food than I need, but if you have too much you can always share with the new friends you’ll meet on the trek.

New Zealand is situated under a big rip in the ozone layer, so even easily tanned folks like myself need constant reapplications of sunscreen. There is almost no shade on the Tongariro Crossing, so you can expect to spend 6-8 hours in the beating sun if it’s a clear day. Several of our mates who began the trek with white skin finished with pink… don’t let that happen to you!

I knew the Tongariro Crossing was going to be a challenge, especially given my ill-suited knees, so I was mentally preparing myself for the journey weeks in advance. I physically prepared as best as I could and loaded up on ibuprofen, lots and lots of ibuprofen. If you have any issues at all with your ankles, knees, back – whatever – be sure to take along plenty of your medication of choice. And bring band-aids! I was lucky to be saved by a Royal Marine when I got a heinous blister (literally, the worst one I’ve ever had) but chances are you won’t be so lucky.

If you don’t already have hiking boots, no worries! I wore sturdy sneakers and they did just fine. Sturdy is key though, as one of my friends wore old hiking boots and another wore Keds – and both disintegrated and had to be thrown out after the trek. Don’t even think about wearing sandals unless you are a masochist. 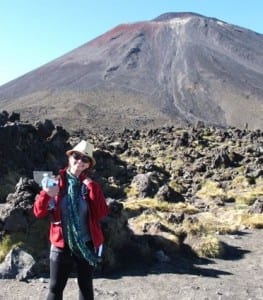 We were told to prepare for all types of weather as the conditions on the trek can change rapidly, even in the summer, so layers are key! For our January trek, I wore leggings under running shorts, a T-shirt and a fleece, and also brought a scarf and a hat just in case. I looked a bit like a bag lady, but I was comfortable in that all day.

Up Next… Windy Wellington

4 thoughts on “Tips for Hiking the Tongariro Alpine Crossing”