But I didn’t even bring decent shoes. I can’t climb 7,500 feet in flip-flops.

You can borrow someone else’s.

But I didn’t get any sleep last night and I’m totally exhausted from being in the sun all day.

You can take a nap on the way there.

I’m scared of hiking in the dark.

You won’t be alone. You’ll have a flashlight. And the sun will rise before you know it.

But a coral reef attacked me this morning and my leg hurts.

You’ll be ok. If Moses did it at 80-years-old in sandals and without an iPod, I think you’ll manage. 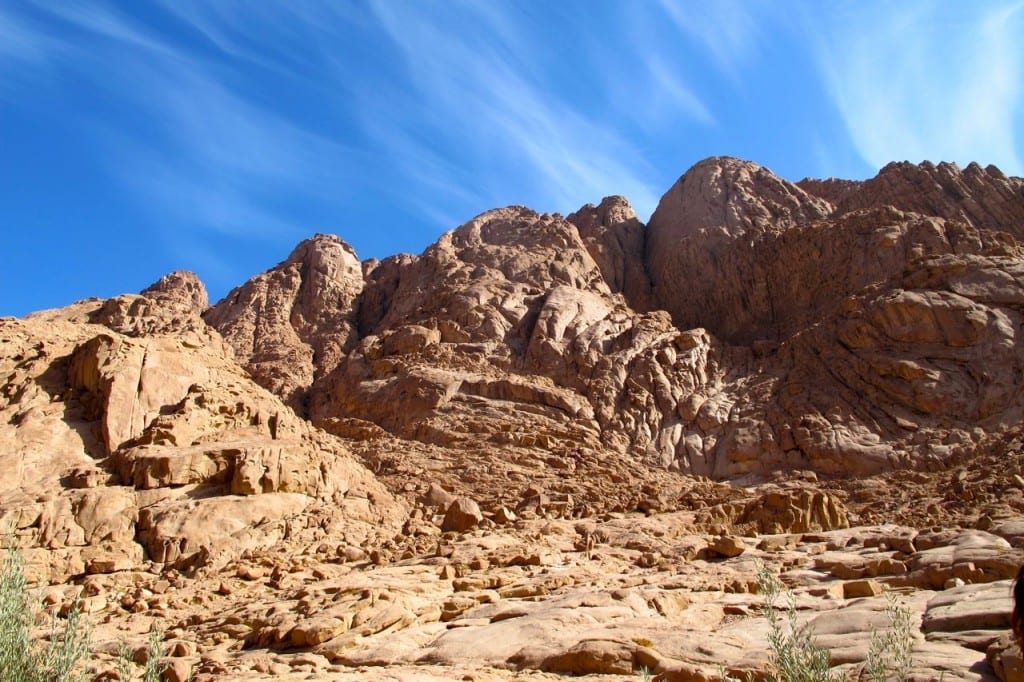 Some backstory on Moses: He was born in Egypt at a time when the Pharaoh declared all firstborn Hebrew sons should be drowned. To save her baby, Moses’ mother and sister placed him in a basket and floated him up the Nile where he was rescued and adopted by the Pharaoh’s daughter and raised in the palace. Over the years, Moses was credited with leading his people out of slavery in Egypt, parting the Red Sea and hiking Mt. Sinai where he received the Ten Commandments from God.

While my attempt to summit Mt. Sinai was less significant on a world history level, completing the hike made me relate to Moses’ struggles to obey God in a way I never had before. When God told Moses to climb Mt. Sinai, Moses was like, “Actually, maybe you can find someone else. I’m really not feeling it. I don’t even like hiking. There has to be someone better for the job. I mean, I’m like, 80 years old. I didn’t bring my hiking sandals!” He didn’t want to be uncomfortable; he didn’t think he could do it. He doubted himself and he doubted God’s plan.

Moses offered a heap of excuses before finally agreeing to hike Mt. Sinai — kinda like I did.

It wasn’t a message from God that finally convinced me to do the hike of course, but instead it was the new friends I’d made on my On the Go tour. Though the night before was mostly sleepless and was followed by a much-too-early morning of snorkeling and an altercation with a coral reef, at 11 p.m. our ragtag group of Egypt-touring misfits boarded the bus for a two hour ride to the base of the mountain. I was fully exhausted, a little dehydrated, hungry and my leg was freshly sliced by the coral reef — and that was before I started the 12 hour overnight adventure.

The first hour was relatively easy despite it being pitch black — in fact, I think it was easier because I couldn’t see how far we’d climbed. The moon hung somewhere out of sight, but provided enough glow to backlight the mountains around us. The group stayed together, chatting & cutting up like we had at the Egyptian temples, on the hot air balloon over Luxor and on the felucca, at a manageable pace up a steady but comfortable incline.

As I was hoofing it during the first portion of the hike, it occurred to me (and I typed it as a note in my iPhone) that God often gives his clearest direction during a hike – be it a real one on Mt. Sinai or some other metaphorical quest. It’s not like Moses was just chilling by the pool at his resort in Dahab when God passed over the Ten Commandments, you know?

Moses had to wrestle with his own shortcomings and doubts, and ultimately climb a big mountain to get to his God-given purpose in life.

Once we got to the dreaded 750 Steps of Penitence, my goodwill and cheer toward the adventure evaporated. I quickly fell to the back of the pack, wincing every time I stubbed my right toes on rocks in the dark. The cuts on my calf felt like they split every time I took a step. After 10 minutes of stair climbing, I was huffing and puffing and muttering woefully about that handsome Australian guy that convinced me to hike this stupid mountain in the middle of the night.

As I struggled with every additional step, I began to think up excuses to explain to everyone sprinting effortlessly to the top why I was lagging so embarrassingly far behind. Here’s what I came up with:

If nothing else, coming up with excuses for my lameness at least helped me to pass the time, and like Moses, I left Mt. Sinai with some solid truth:

Long term travel has not been good to my health.

On top of myriad injuries, illnesses and scars this year, I’m also ridiculously out of shape. I rarely get a chance to go to the gym or run and my food choices consist of whatever is closest and cheapest at the moment when my tummy starts to rumble. Usually that’s a Snickers & a Coke. No wonder I felt like I was going to die.

While breathlessly heaving midway up the staircase of doom, I reminded myself that if 80-year-old Moses in his sandals managed to go up and down this mountain twice, certainly I could suck it up and make it work. And Haytham, our guide, was frolicking like a little forest pixie up the steps — while chain smoking. Not coughing, not pausing, not stopping for a drink of water. His advice to me? Just run to the top. (Oh, and then, at around 5,000 feet, Haytham told me that this mountain is just one of several mountains that could be the real Mt. Sinai. REALLY.)

If I’d had the energy I would’ve beat him up. 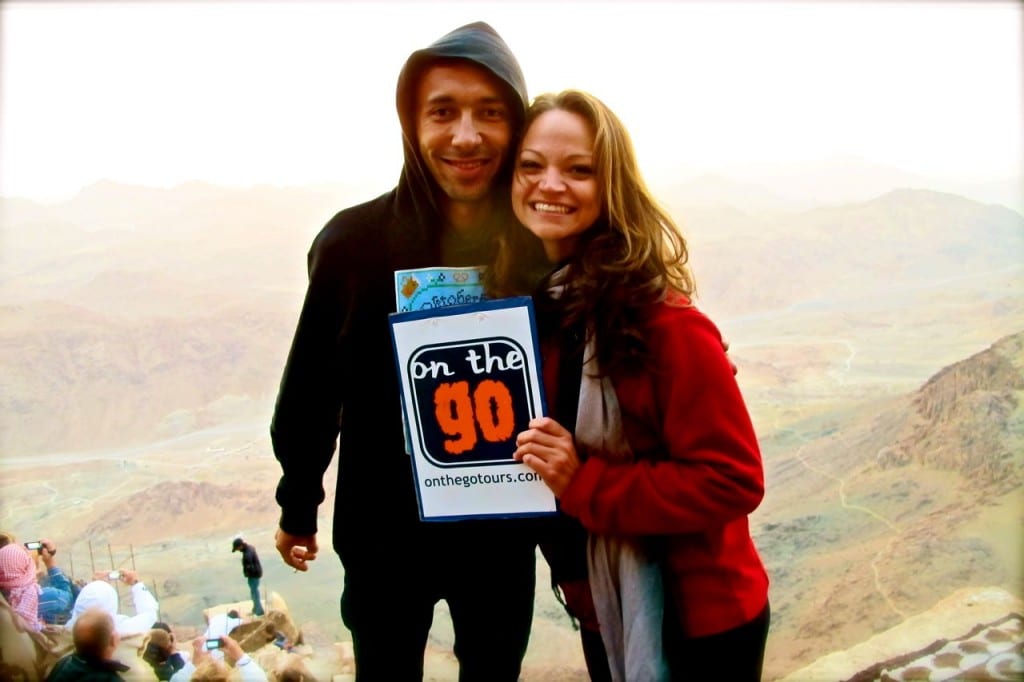 Sunrise at the top of Mt. Sinai

A few hours later, after much internal whinging and external wheezing on my behalf, our group made it to the top of Mt. Sinai. It was freezing once we stopped climbing, so we rented mattresses and heavy blankets (of questionable cleanliness) from the Bedouins along the way. Haytham lead us to the perfect rock ledge overlooking the darkness and we cozied up and awaited the sun’s debut. 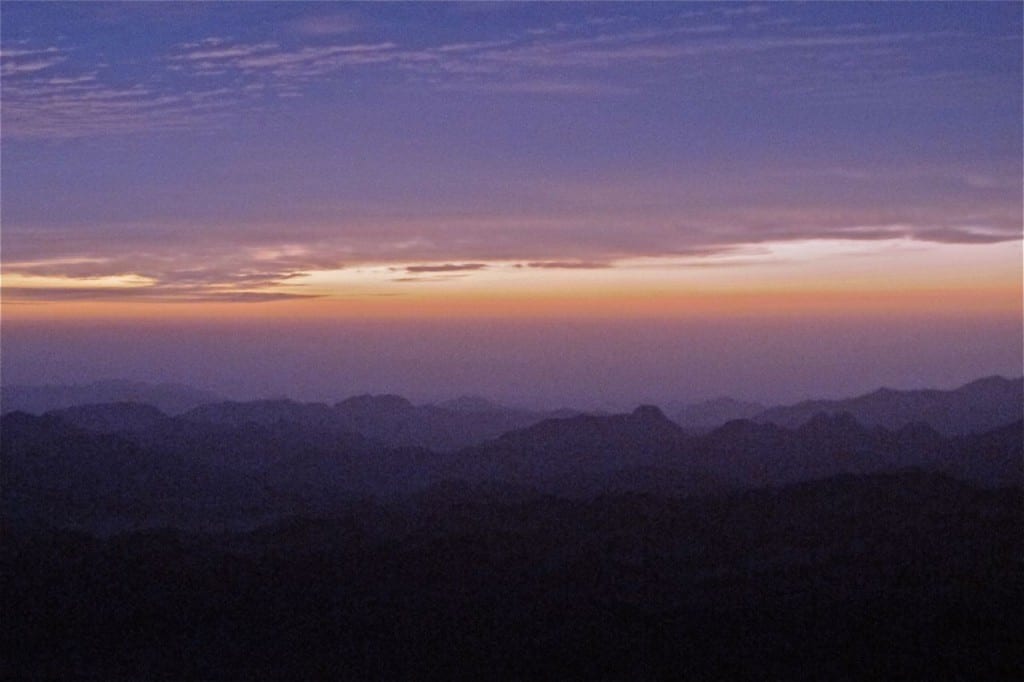 “Be ready in the morning to climb Mount Sinai and get set to meet me on top of the mountain.” — Exodus 34:2 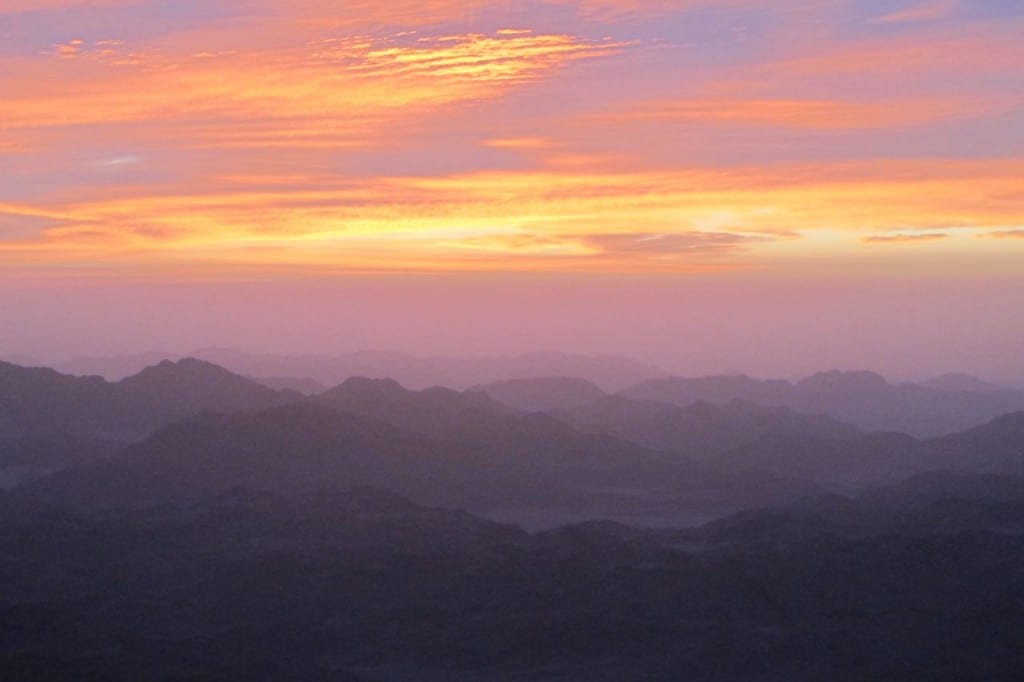 “The smoke billowed up from it like smoke from a furnace, the whole mountain trembled….” ― Exodus 19:18 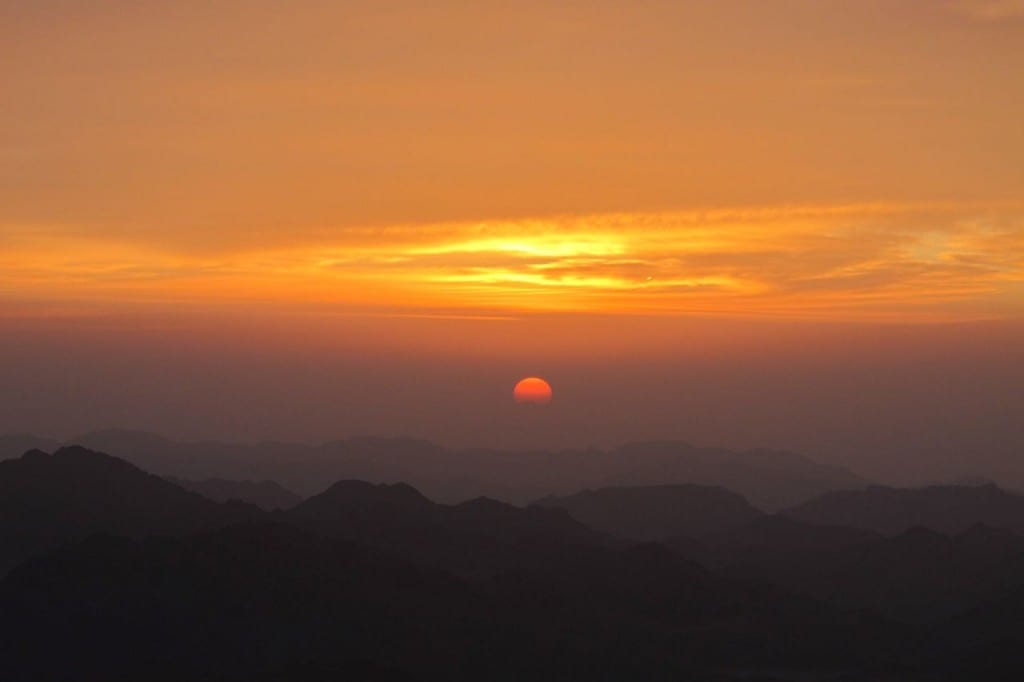 “When Moses came down from Mount Sinai carrying the two Tablets of The Testimony, he didn’t know that the skin of his face glowed because he had been speaking with God. Aaron and all the Israelites saw Moses, saw his radiant face, and held back, afraid to get close to him.” — Exodus 34:29-30 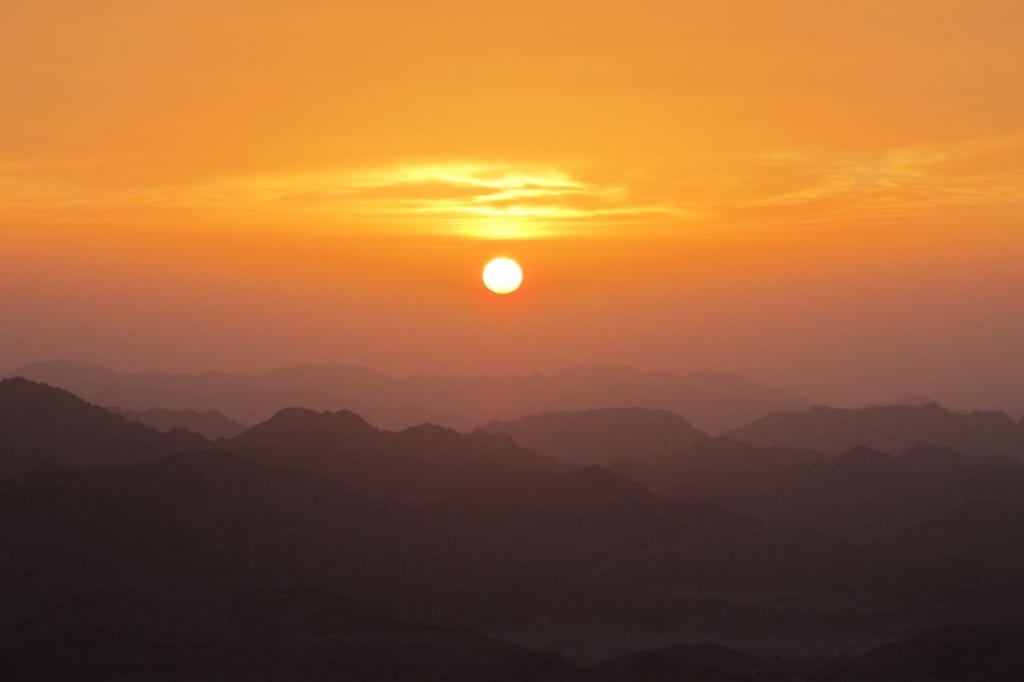 My trip up Mt. Sinai wasn’t exactly a Moses-caliber hike. I didn’t come back with messages for the people via stone tablets and I’m pretty sure I wasn’t glowing with radiance when I returned to sea level. (In fact, I bet I was a scary sight. No photos remain of the trip down…)

Even without an expressly divine purpose, I experienced a breathtaking sunrise, spent time with some of my favorite new friends I met all year and had a few personal epiphanies about obedience, trials and life’s purpose.

So, yeah, hiking Mt. Sinai was worth it after all.