By the time we arrived in Dahab on the southeast coast of the Sinai Peninsula, I was so worn out that I wasn’t quite sure what day it was. I’d seen the sunrise at least 75% of the mornings already spent in Egypt – on a jerky overnight train to Aswan, on a leisurely felucca excursion up the Nile, from the basket of a hot air balloon over the Valley of the Kings in Luxor and from the back of a coach on a grueling 18 hour (YES, 18 HOUR) ride from Luxor to the coast, during which a skeezy gas station bathroom attendant groped me in the middle of the night.

I was just about to lose steam and faint dead away with fatigue, but I lived on knowing there was a seaside oasis just ahead. 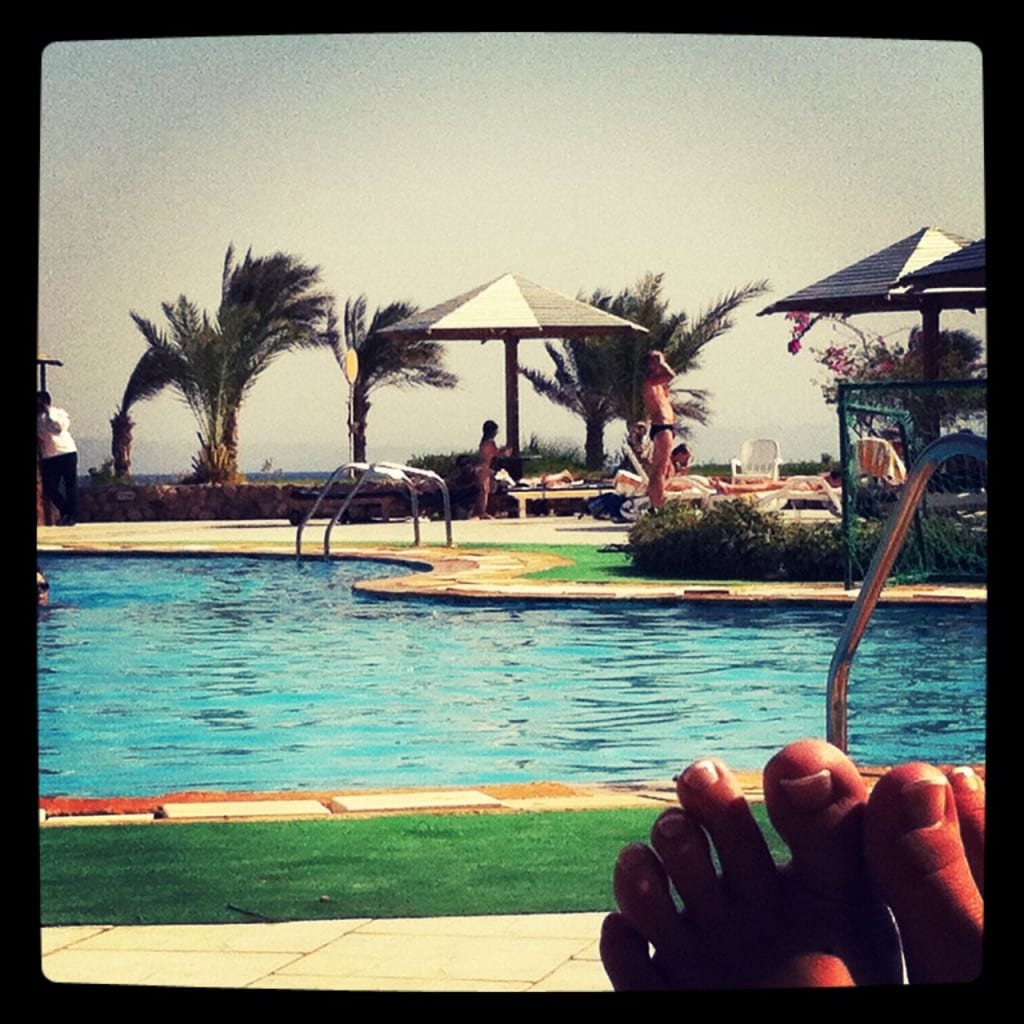 Poolside, ever so briefly

I made my way immediately to the pool upon arrival, but found I was too tired to have fun but still too excited to go to sleep.

My FOMO (Fear Of Missing Out) was flaring up again.

Those fleeting moments at the pool were all I saw of Dahab’s relaxing vibe. Things were about to get cray. 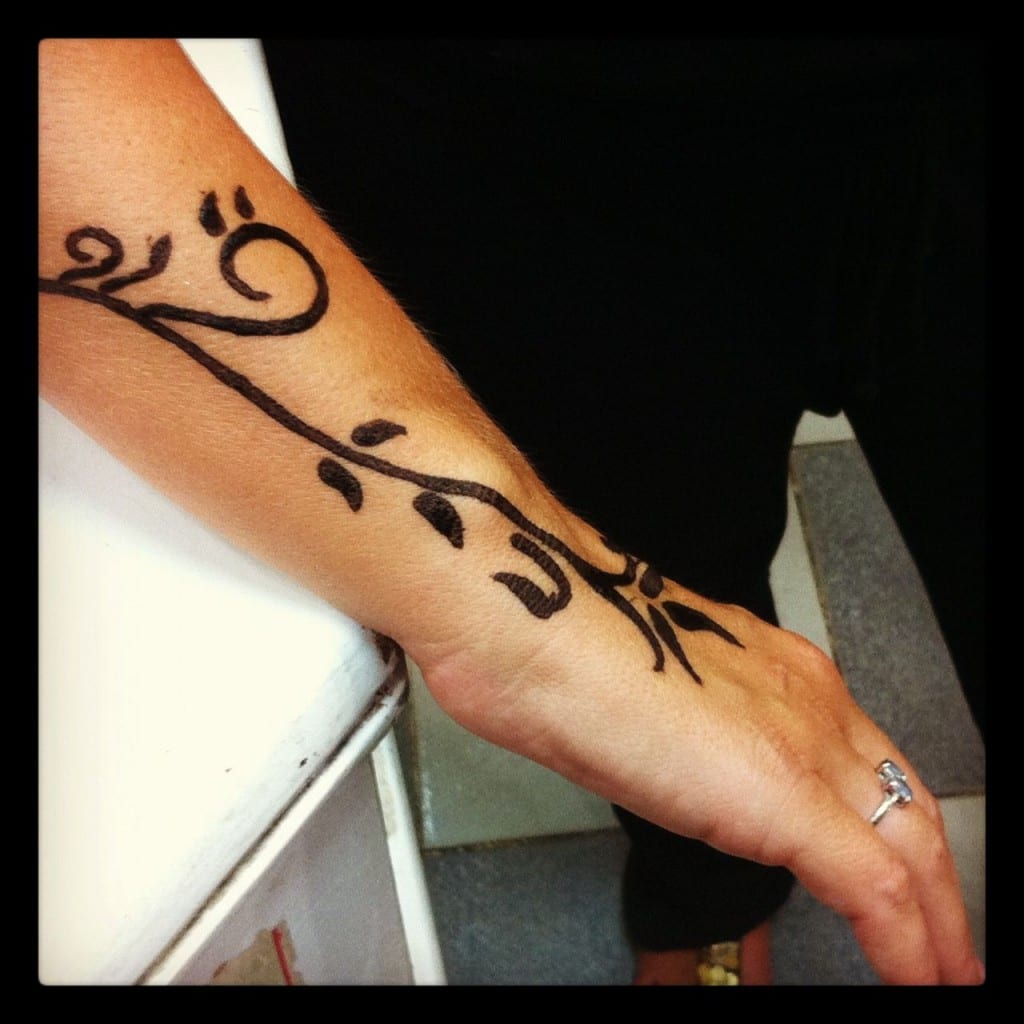 Not that cray! But you can get henna tattoos all over the village in Dahab.

Dahab once was a Bedouin fishing village but today is known as a top diving destination on the Red Sea. My Kiwi roommate was a certified diver, too, so we decided to get some rest for a few days before taking the plunge. In the meantime, On The Go had a few activities to choose from, some more leisurely than others, like dining al fresco at some of the seaside restaurants, shopping in the markets, snorkeling in the blue hole or hiking Mt. Sinai. 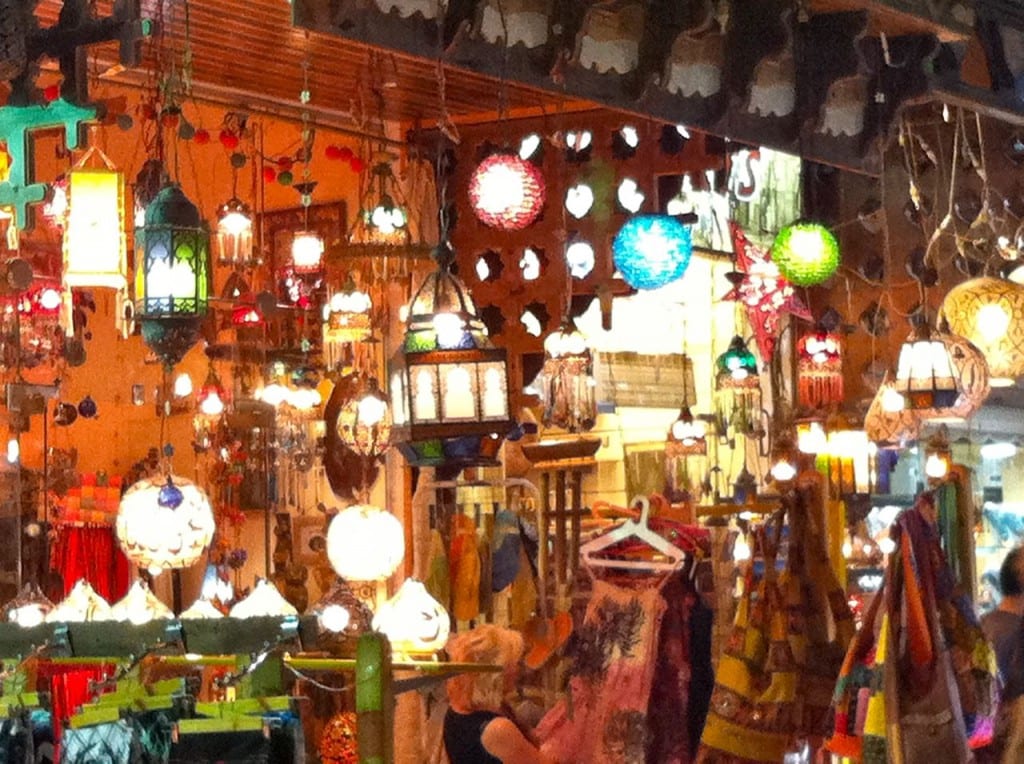 Gorgeous lanterns in a shop window in Dahab

Obviously after my hiking debacles of the past year (ahem, TONGARIRO!), I immediately decided against Mt. Sinai. Moses or no Moses, I was not about to go gallivanting up a bloody mountain — no matter what. I didn’t even bring decent shoes for hiking, that’s how opposed to the activity I’d become.

Nothing, and I mean nothing, could get my out-of-shape, hiking-hating behind up a mountain.

Except maybe a cute Aussie guy and a little bit of peer pressure. Yargghhh. So yeah, I did the stupid hike. 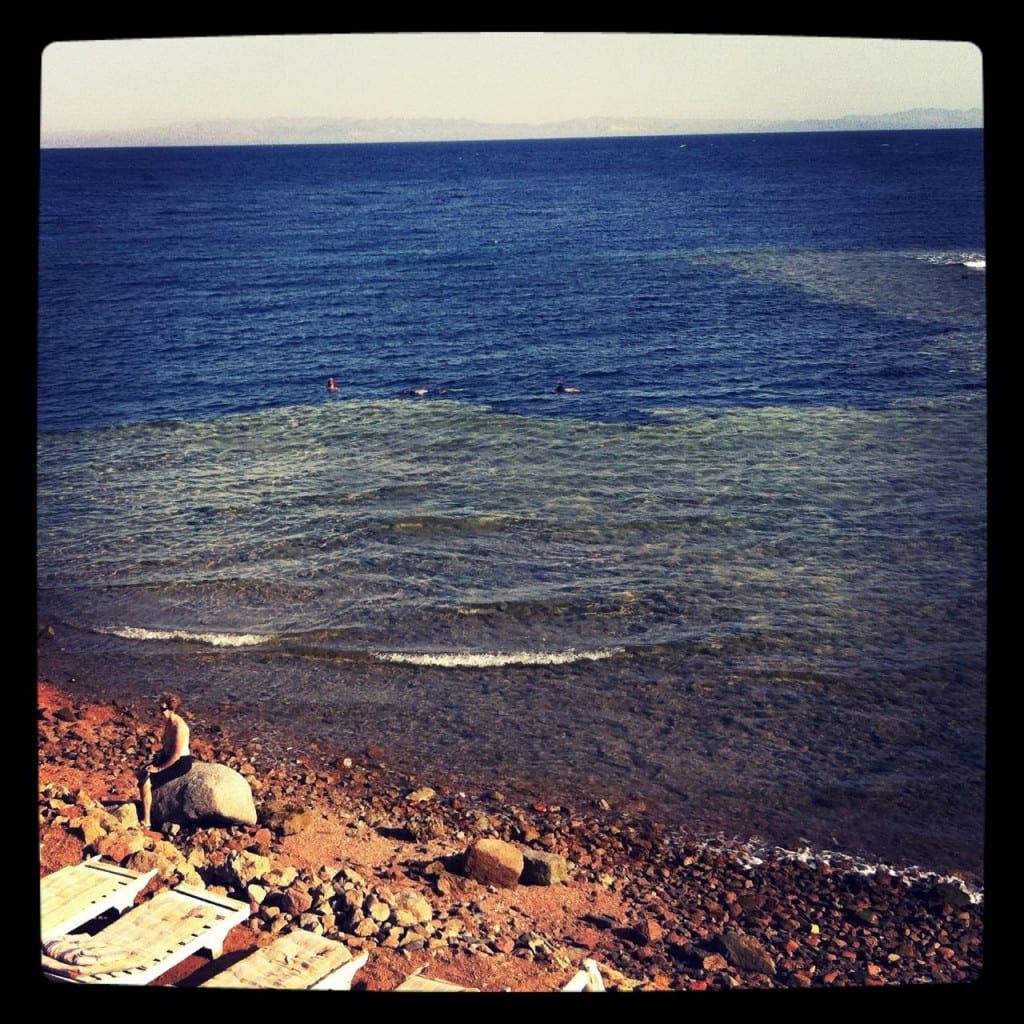 Dahab’s blue hole, known as one of the world’s most dangerous diving sites

Before I was sweet-talked into recreating the Ten Commandments trek, I’d already planned to go snorkeling at the blue hole semi-early that morning.  Despite being brutally exhausted from the mega-bus ride across the Sinai Peninsula, we all stayed up too late and had one of those evenings where you laugh until your sides hurt and have the BESTTIMEEVER and Tweet stupid inside jokes that only the six of you understand and scratch your iPhone screen and leave your iPod in the sand and maybe get one of the hotel guards on your bad side.

I mean, that’s just what I heard. 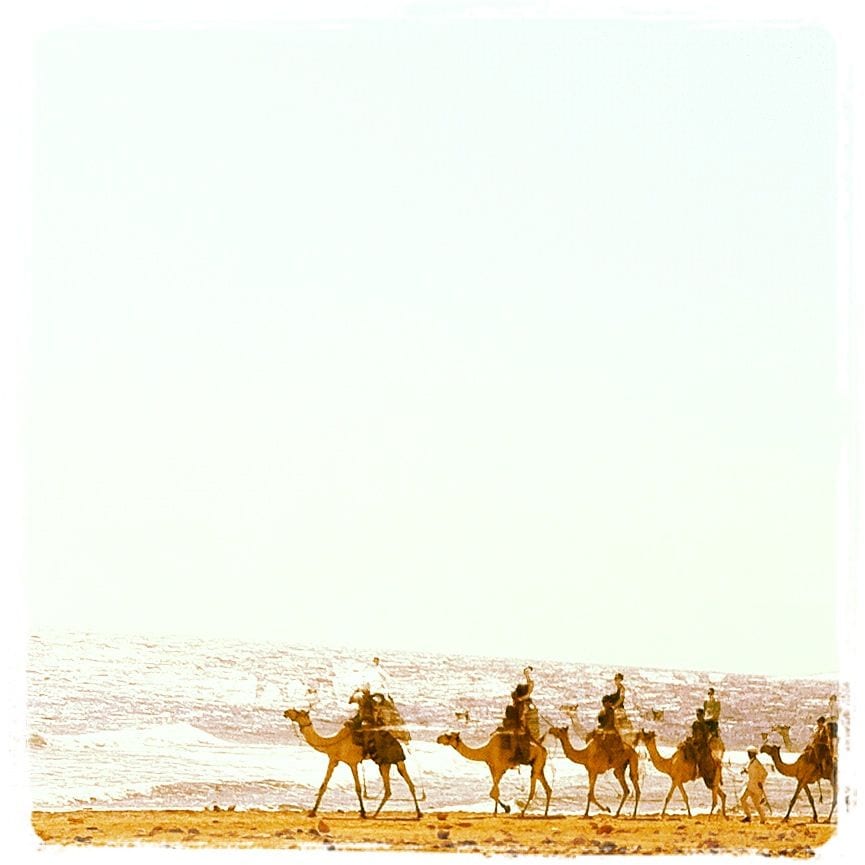 I should’ve cameled instead of snorkeled

The wake up call for the blue hole trip was much too early, but I dragged myself out of bed knowing that snorkeling was a no-brainer and more importantly, I’d have a quiet night at the hotel since the majority of my new amigos were hitting the hiking trail later that night. (Yeah, the bus to Mt. Sinai was scheduled to leave at 11 p.m., and the hike lasts from 1 a.m. until about 11 a.m. In whose mind is this a good idea?!)

So much for an easy morning! I’d hardly seen any fishies before a big swell scooped me up and swooshed me right into the coral reef at the edge of the blue hole. Man down! My right calf was shredded, burning and bleeding, so I dog paddled to the dock and limped dramatically toward the local guys who ran the cafe where we were keeping our stuff.

Do you have a bandage or some first aid? I asked.

Hold on, he said, grabbing the back of my leg and turning it toward him.

Suddenly I felt a little sting and jerked my leg away. Owww, what are you doing? I yelped.

He’d soaked a tissue in boiling hot water from the teapot and pressed it hard against my bloody stump of a leg.

Owww, that really hurts, I pouted. I figured the scrapes needed to be cleaned of course, but I expected hydrogen peroxide or something equally likely to be found in a first aid kit. I decided to suck it up and deal with the super hot water he was pres —-

I shrieked for all to hear and yanked my leg away from him once again, but much more forcefully, and turned to see that he had just squeezed a fresh lemon into my fresh cuts. My bloody (literally bloody, not like, “Cheerio, my bloody leg was really giving me trouble, Gov’nah”) leg was on fire, burning ten times worse than it did a moment ago. I couldn’t help tears from welling up in my eyes – and I am soooo not a public crier!

Tearfully and with an uncontrollably quivering lower lip, I told him to forget it – I was done with Egyptian first aid. He retorted quite aggressively that my leg would probably fall off if he didn’t squeeze more lemon into it. I retreated to my cushion on the floor and whimpered for a bit. 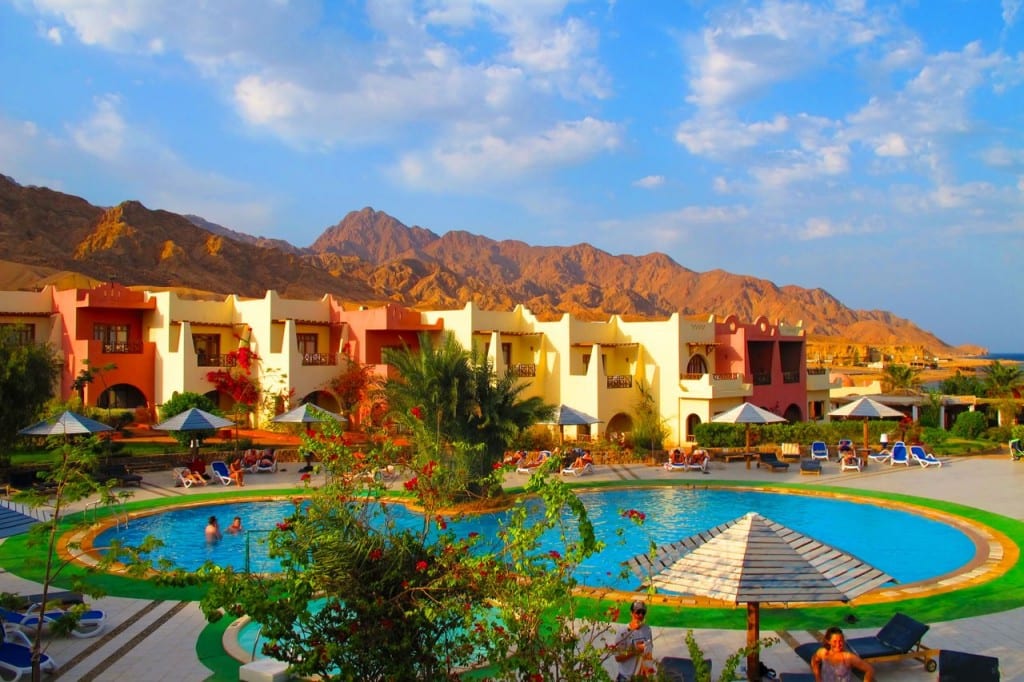 Our lovely hotel, bookended by dry mountains and the sea

Somehow, during my moment of weakness and coral-and-lemon induced pain, the cute & caring Aussie sold me on the absurd idea of hiking Mt. Sinai all night long — regardless of these seemingly important facts: 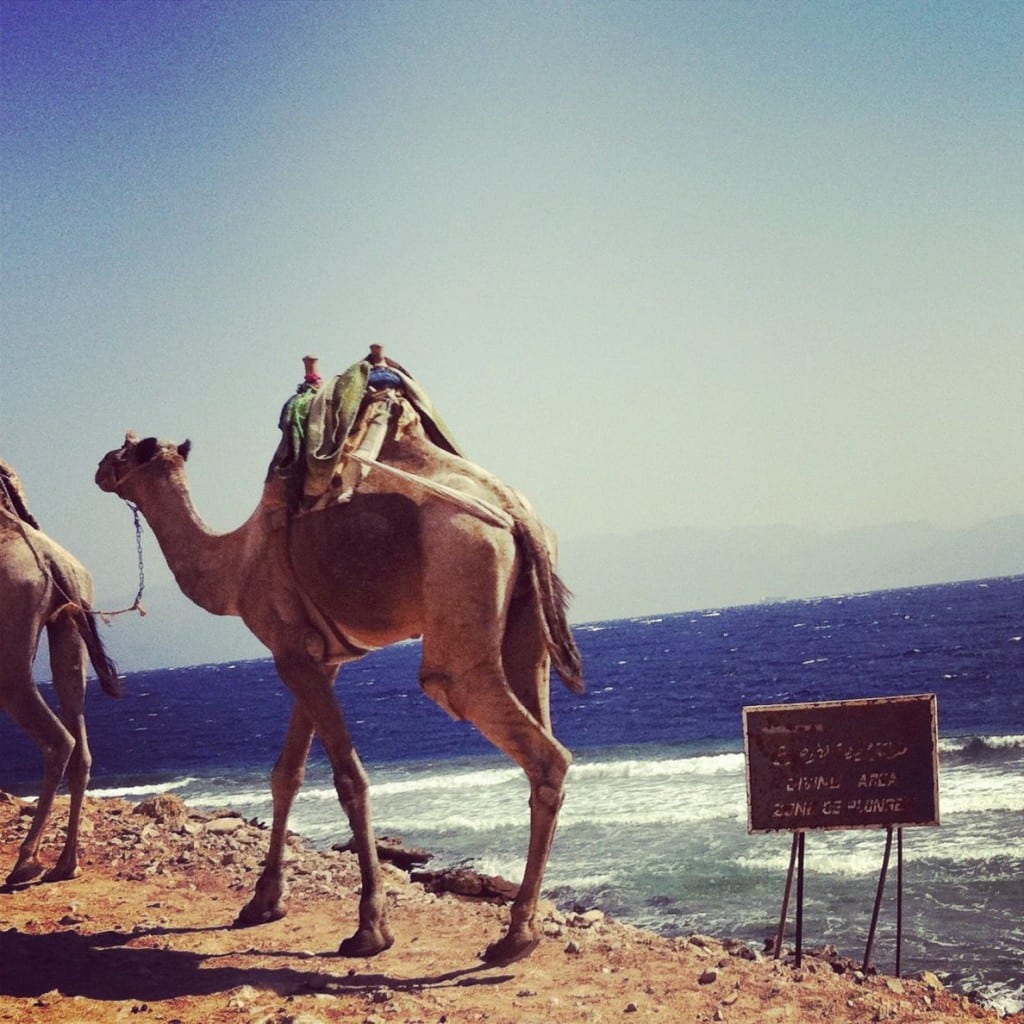 Seriously, what is wrong with me!?

Up next… Moses was how old when he did this hike?