It’s hard to say what my favorite activity or site in Egypt ultimately was, because there were too many good times to count in the span of two weeks.

Hot air ballooning over the Valley of the Kings, camel-riding around the Great Pyramids of Giza, scuba diving in Dahab, hiking Mt. Sinai in the middle of the night… not to mention meeting some of the my favorite new friends of the year.

How could I even begin to choose a favorite moment? 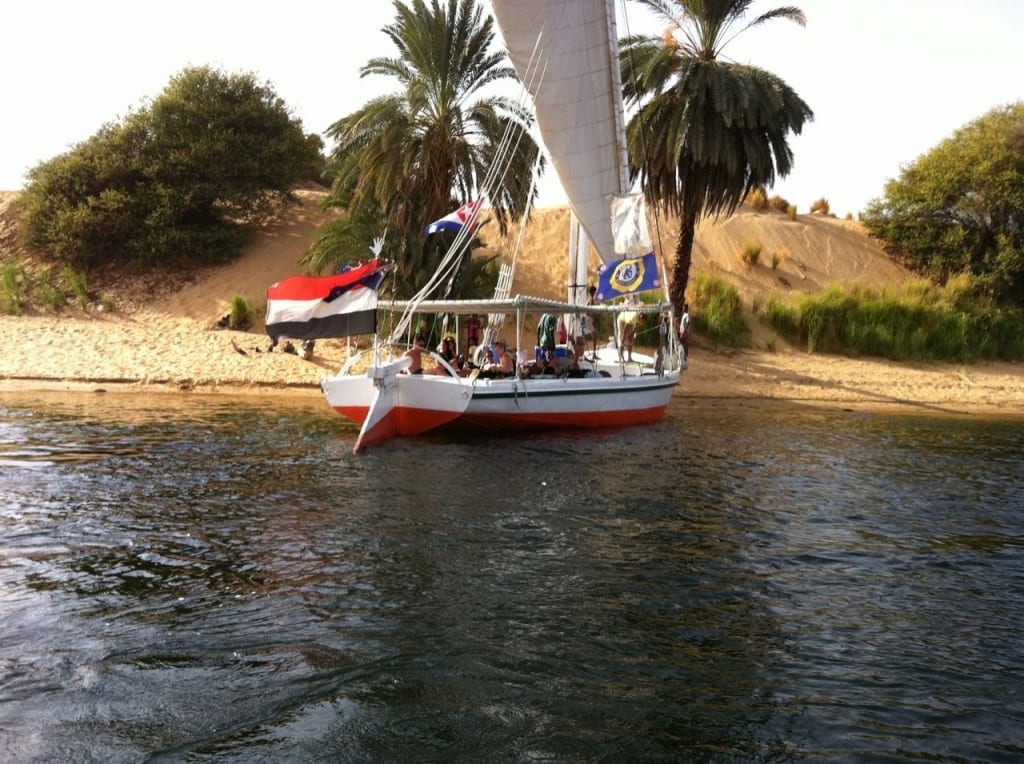 One of highlights that sticks out in my head has to be our two night cruise down the Nile on a felucca tour.

A felucca is a traditional sailboat used to transport people and goods on the river. Feluccas rely solely on wind-power and have no engines, so the itinerary is never quite set in advance — something I was mildly concerned about at the outset.

Would I be bored out of my mind? 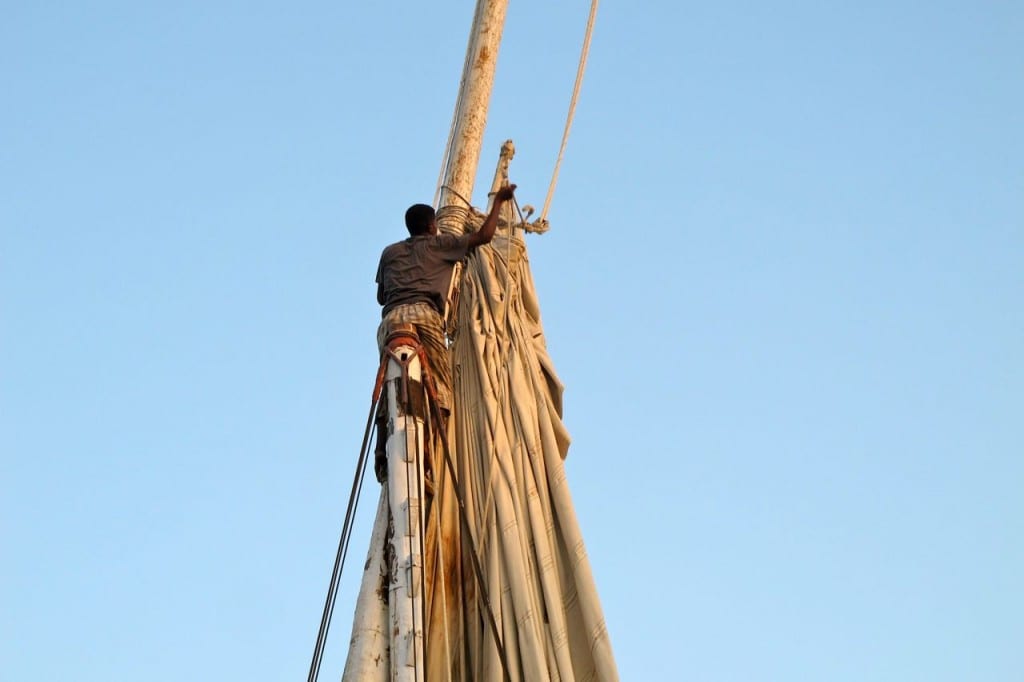 A crew member adjusts the sails on a particularly windless morning

The felucca tour was not my only option, as On The Go offers an alternative: a 5-star luxury cruise down the river for additional cost. Since I was watching my budget (watching it shrink), I decided to forgo restrooms, showers and mod cons for two days and wing it on the felucca with about 15 people I’d known for 48 hours. I figured whether it was a good memory like family cruises of the past, or a miserable, slow moving disaster, I was willing to take the risk.

Either way, I’d end up with a good story.

Lunch with my shipmates Steph, Elle, Haytham, KB & Shea before launching on the first day

it honestly didn’t matter to me if we ever set foot on land again. 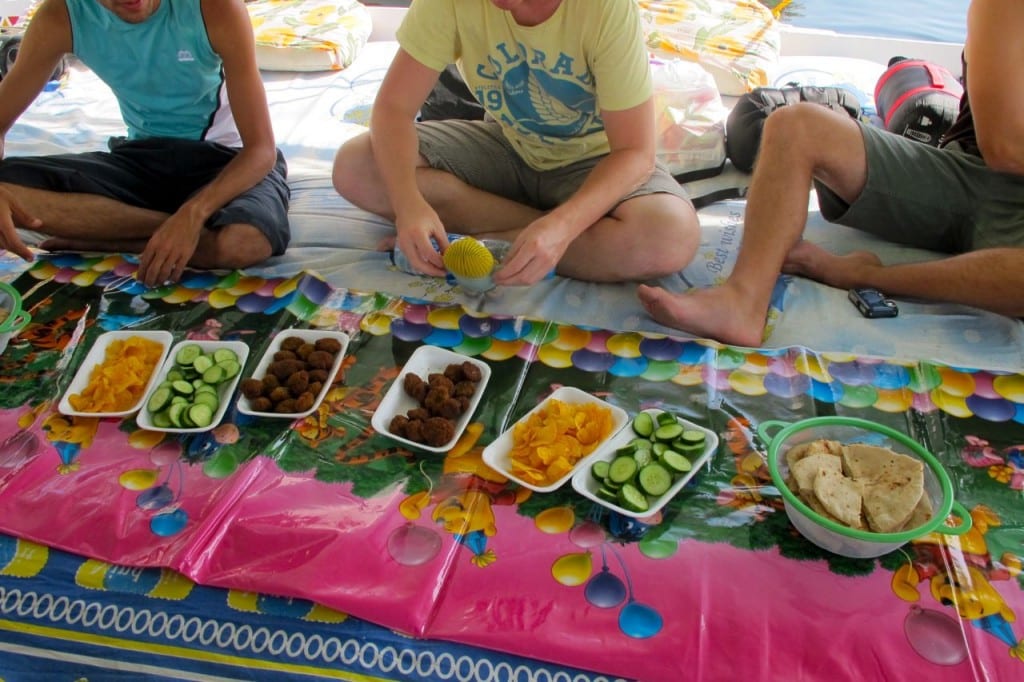 Lunchtime on the felucca tour

I expected to have a satisfactory time onboard. Never did it occur to me that I’d finally find the absolute relaxation I’d been looking for on the Nile, of all places. The felucca’s deck was covered in colorful cushions and pillows and sheltered from the desert sun by a canvas, so the main priority of each day was getting comfortable and lazing about in the sun.

It was unexpected bliss. 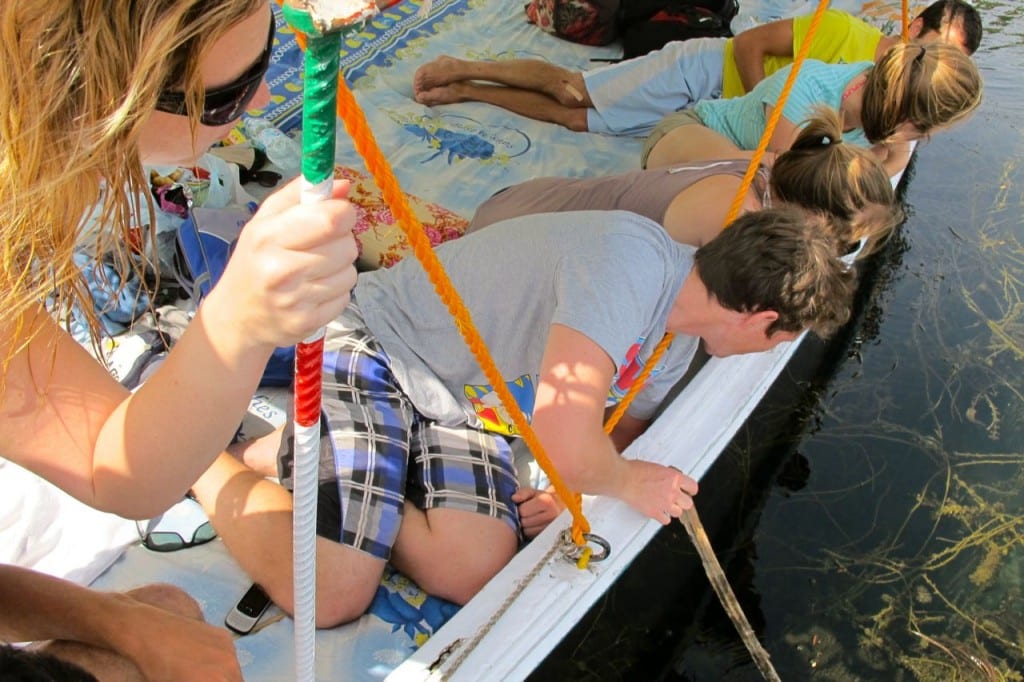 We chatted, we read, we played cards, we drank Sprite (inexplicably called lemonade by the crazy Australians), we came up with plans to overtake the other felucca dressed as pirates (sadly this never happened), we ate hummus, we accompanied each other for potty breaks in the desert while attempting to avoid gargantuan beetles, we swam in the Nile.

We slept under the stars. 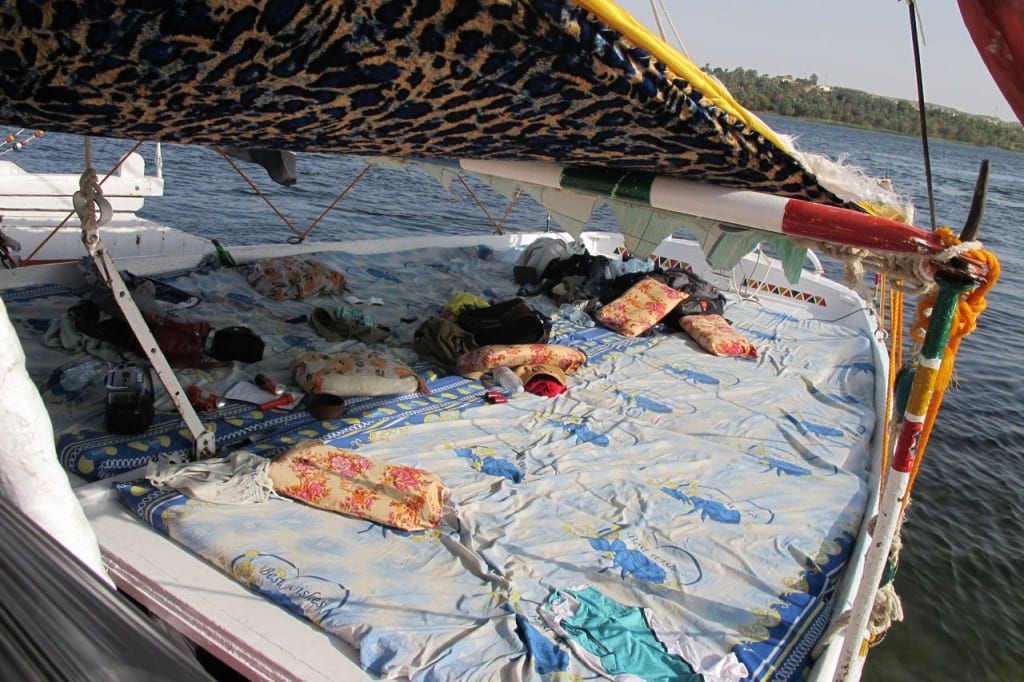 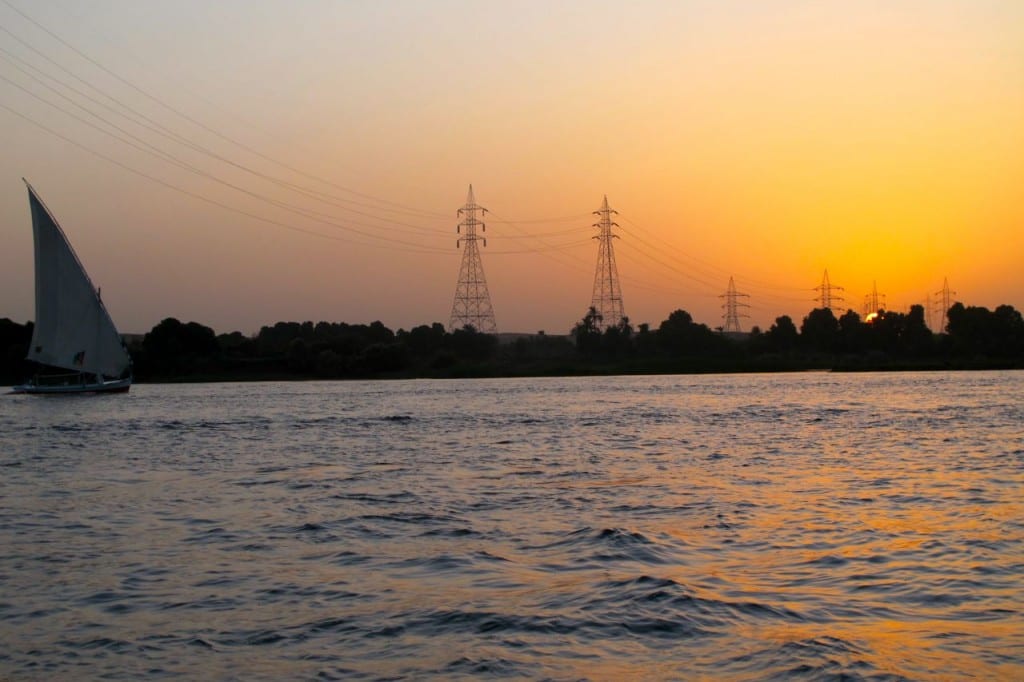 Sunset on the way to Luxor

Each night, we tied up at the shoreline for a group dinner, lots of laughter and eventually, bedtime on our floating mattress. On the first night, we docked and walked about 5 minutes to a nearby Nubian village where I made friends with a few adorable toddlers and everyone shared puffs of apple shisha.

That night we made our beds, foot-to-foot, four on each side and attempted to sleep through a bright full moon, some wild wind that came up out of nowhere and the sounds of creatures lurking in the greenery along the bank.

I didn’t sleep a wink the entire night, but it was dreamy and idyllic and wild all at once, so I didn’t even mind. 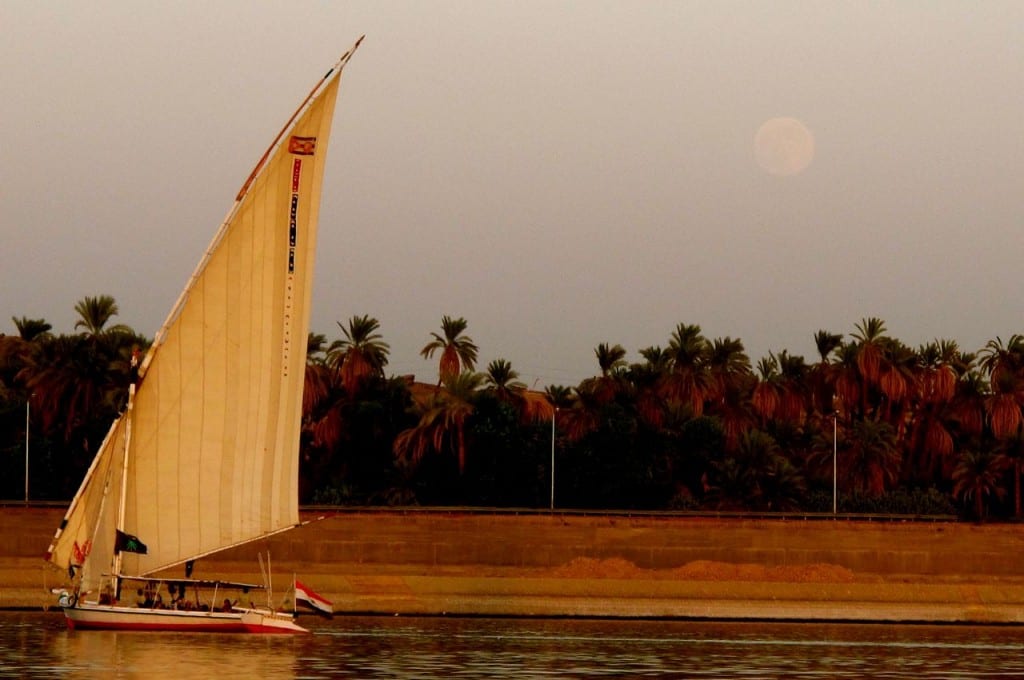 The next night, we docked a few hours south of Luxor, with the intent of sailing at 2 a.m. in order to arrive early enough to meet our bus and visit Kom Ombo and Edfu temples. After doing nothing all day but cat-napping in the sun, swimming in the Nile and reading my book, we docked for dinner, drinks and a huge moonlit bonfire in the desert, complete with shisha, dancing, laughing and local tunes.

It’s a treasured, sweet memory that definitely stands out as one of those surreal, almost mythical moments when the downsides of travel are forgotten and all you feel is perfect, intoxicating freedom.

Like spinning around in circles until you fall down or laughing until you cry. So sublime! 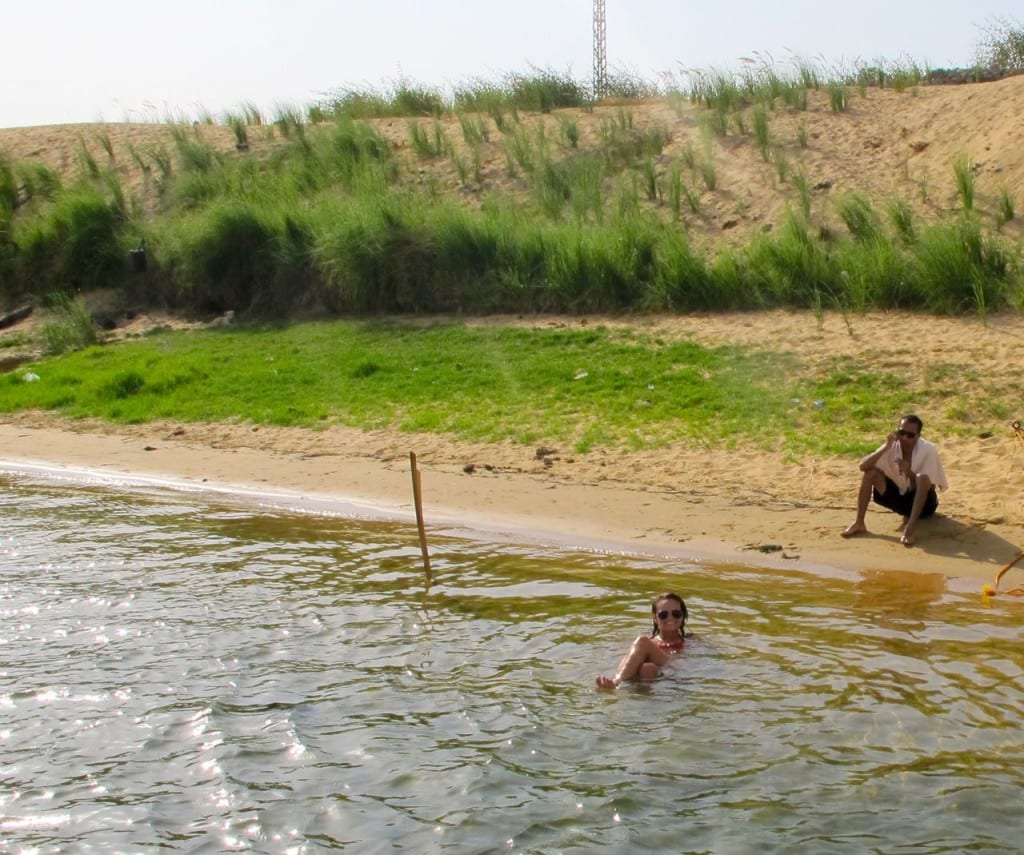 So was I bored on my felucca tour? Not for a moment!

Despite roughing it just a little, the felucca experience was well worth having to tinkle in the desert for a couple of days. If you’re planning a trip to Egypt, don’t miss a felucca cruise! 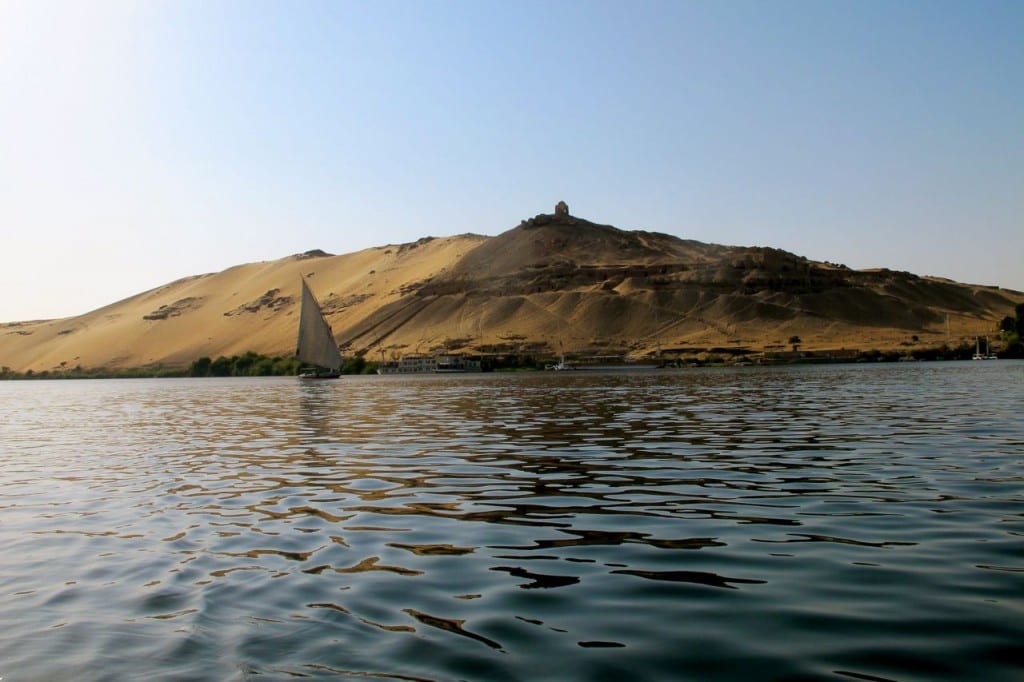 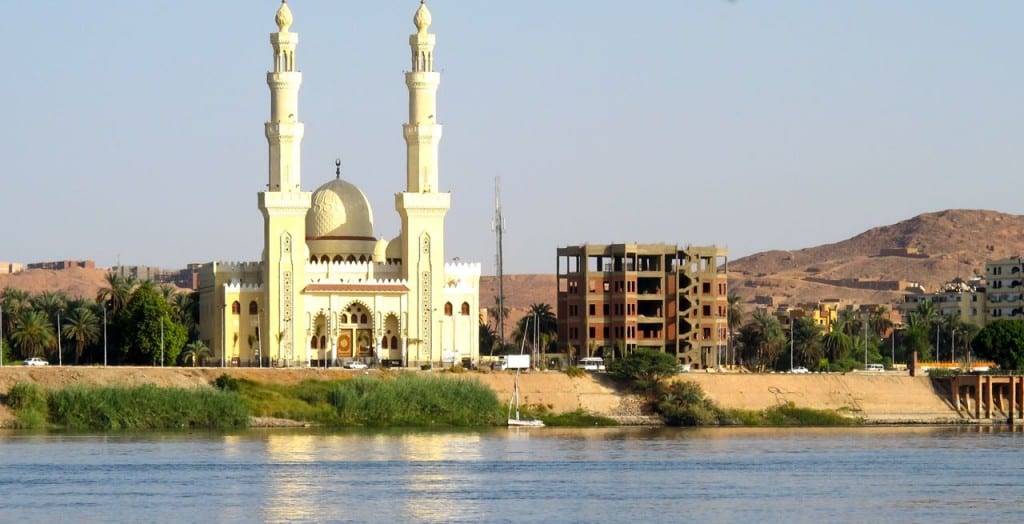