If the first part of the Tongariro Alpine Crossing was brutal because of its steep climbs and descents, the last 7 km were even more cruel in their adamant refusal to ever come to an end… kinda like this series of blog posts. 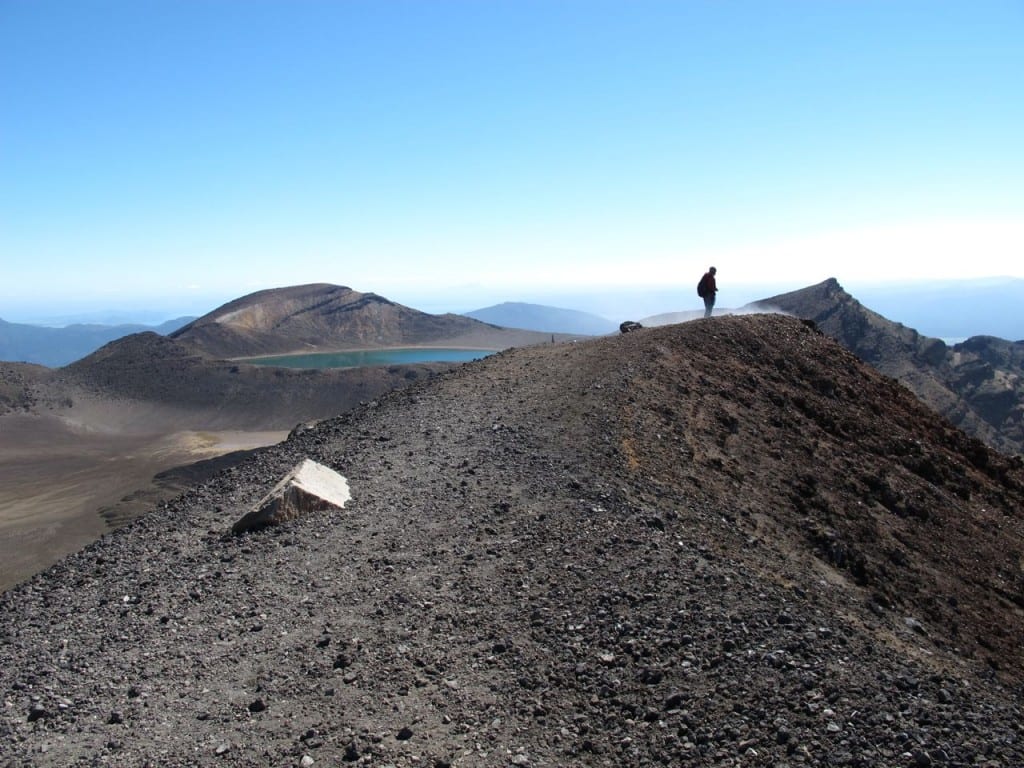 Four hours after starting, I was quite ready for the whole experience to be over. I’d climbed enough to prove that I wasn’t the fattest American ever to attempt Mordor and I’d taken some gorgeous photos that will always remind me of my accomplishment. But with no way out other than finishing, we pressed on… 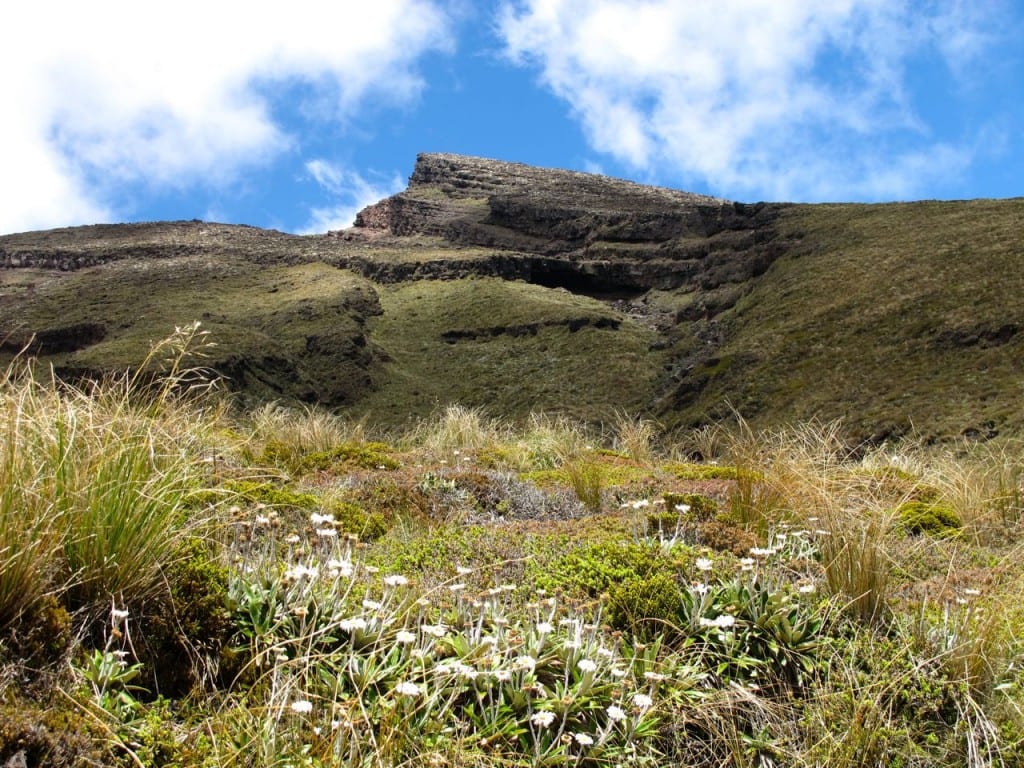 Once we reached the Ketetahi Hut, I began to get giddy. Since it’s the stop just before the car park at the finish line, I knew we were nearing the end. I envisioned a parking lot full of cheering Flying Kiwis to appear any moment. Then I saw the last signpost indicating that we had 7 kilometers to go. Seven more kilometers. That’s more than I would do on a good day on the treadmill, without a wonky back, wobbly knees and aching feet. I gave up on the celebrity name game and I was too over hiking to continue singing Disney songs with Caroline. All I could think about was how much I hated Hobbits, Tolkien and Peter Jackson at that moment, and how if we didn’t finish soon, I would likely die on the Tongariro Crossing. Cue the dramatic soundtrack from Lord of the Rings.

After trekking a bit longer past the Ketetahi Hut, one of my lil toes started to burn with a white hot intensity. I tried to ignore it but eventually I ripped off my tephra-covered shoe and saw that I had a beast of a blister raging between two toes. There was no fixing it, no escaping the trek and I didn’t have any band-aids, so I was looking at about 3.5 (never ending) miles to go in a very agitated state.

As I sat on the side of the trail for a moment wishing for a miracle, one of Her Majesty’s Royal Marines appeared like a modern day knight and, being trained in mountain warfare (and first aid?), he wrapped up my toe with zinc oxide tape and was gone in a flash. 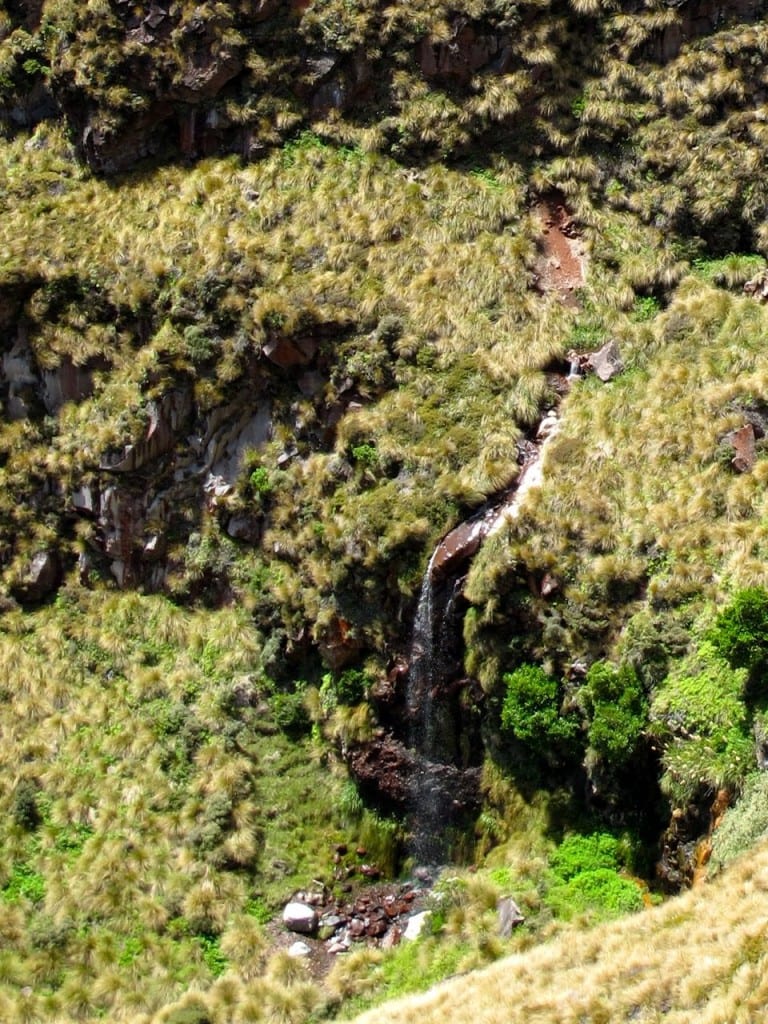 Now I know what you’re thinking, and I swear I wasn’t hallucinating. Royal Marine David was on my Flying Kiwi tour, and like anyone with F.R.E.A.K.S. (fiendish recreational exercise addiction [k] syndrome), he and his super fast mountain walking partner Ed had actually climbed to the top of Mt. Doom and were passing us at top speed on the way to the exit. Let me be clear – they climbed an extra mountain – a 3+ hour side trip. For fun. And they still beat us to the end by a sizable margin with no blisters and no whinging. And I don’t think they were even sore the next day! So I guess this just makes it very clear that I will never be a Royal Marine. Scratch it right off the list. (Thanks for fixing my toe, David!)

There’s no way around it – the end of the hike is heinous. It takes forever to wind through the forest. I won’t belabor the point because why should we both suffer? Just know that if you ever come to New Zealand and do this for yourself, the end is going to wear you out.

When Caroline and I finally did come into the clearing and see the Flying Kiwi bus, I did my best to hide my agitation. I wasn’t even happy that I was finished. I was just cranky and hurting. It took several days to get over the pain and several more weeks to get over the emotional trauma I suffered when everyone beat me to the finish line… but now I can look back on the hike with a fondness that I did not possess at the time. And this video makes me think of Caroline & me trekking through the wilderness…

Hurray! We made it!

We boarded the bus for a four-hour ride and everyone immediately passed out. We awoke to find that Holly and Carolyn had booked us all into complimentary upgraded dorms for the evening – hurray! If I’d had to set up my tent and drag everything into it, there’s a chance I would’ve just slept right on the ground. I could barely move. And there was another surprise – fish and chips for all, compliments of Flying Kiwi. We gathered around the TV in the common room to reminisce about the hike, discuss our varied injuries and watch Jackass and some midget wrestling show on MTV. I tried to explain that all Americans aren’t like those on MTV, but I’m not quite sure how many of my new friends believed me… MTV is quite compelling!

Though it was one of the most exhausting and physically challenging days of my life, in hindsight it was an accomplishment I’m proud to have on my list.

Up Next… How to Prepare for Tongariro

10 thoughts on “The Tongariro Finish Line”