The two weeks I spent exploring Egypt were practically perfect in every way, but I can confirm that this is one destination where there’s an obvious difference in treatment of men vs. women.

If I were a boy (Beyonce, get out of my head today, gees!), my experience would’ve been different. I probably wouldn’t have gotten groped in a gas station bathroom at 4 a.m. (More about that story later.) For now, bear with me, fellas. 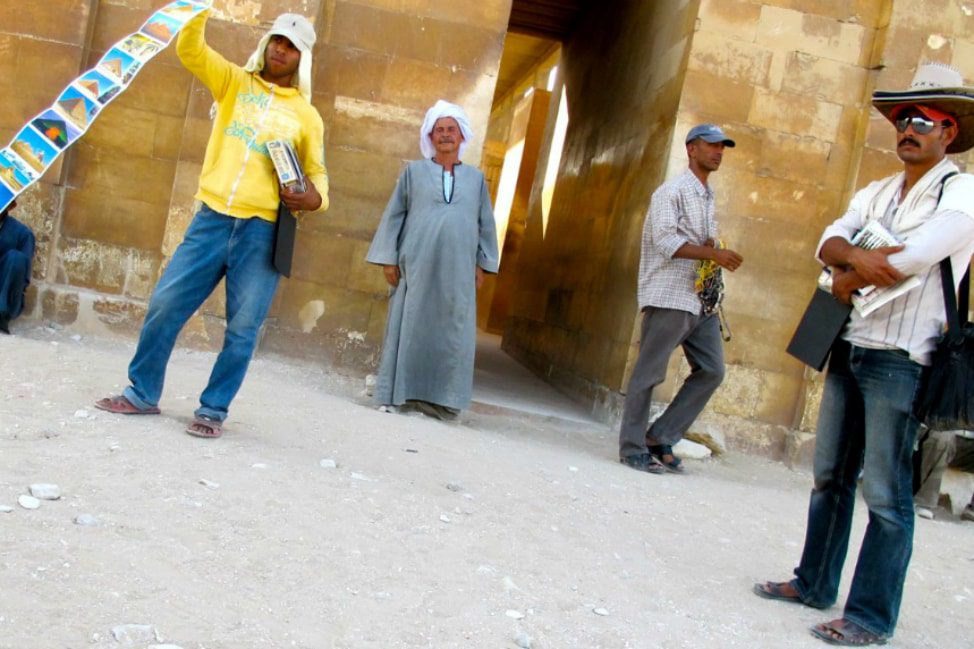 In a post-Arab Spring world, I was pretty concerned about traveling to Egypt and the Middle East in general.

During my trip, the protests had seriously just calmed down and a very precarious peace was in place. I was extra careful in my planning. As a result, I took two big steps based on my pre-trip research.

Y’all know I mostly travel solo, and that’s worked for me so far. For Egypt, I went a different route, traveling with On the Go Tours in a large group. It’s one of the best decisions I made all year. Regardless of what we were wearing, the touts, taxi drivers and beggars shouted at us from the moment we left the hotel until the moment we got on the bus.

Going off for lunch with a group of five girls was quite funny at times – you won’t believe some of the things that locals said to us. However, had I attempted to grab lunch by myself, I’d have been intimidated by the attention and the men following me down the street singing songs about my glorious behind (their words, not mine!), and would probably have spent much of my holiday hiding out in my hotel room.

Egypt is predominantly Muslim, so conservative dress is the standard. I wanted to blend in… as much as a short, curvy, green-eyed American girl can blend in, so I did some research on what to wear in Egypt before I arrived. I packed a very specific wardrobe consisting of dark sunglasses, wide-brimmed hats, long skirts, gauzy tops and linen pants.

Being modestly dressed didn’t stop the all hassling, not by a long shot, but it did keep some of the attention off of me.

There were plenty of girls parading around in outfits that shouldn’t be seen outside Atlantic City that helped as well. 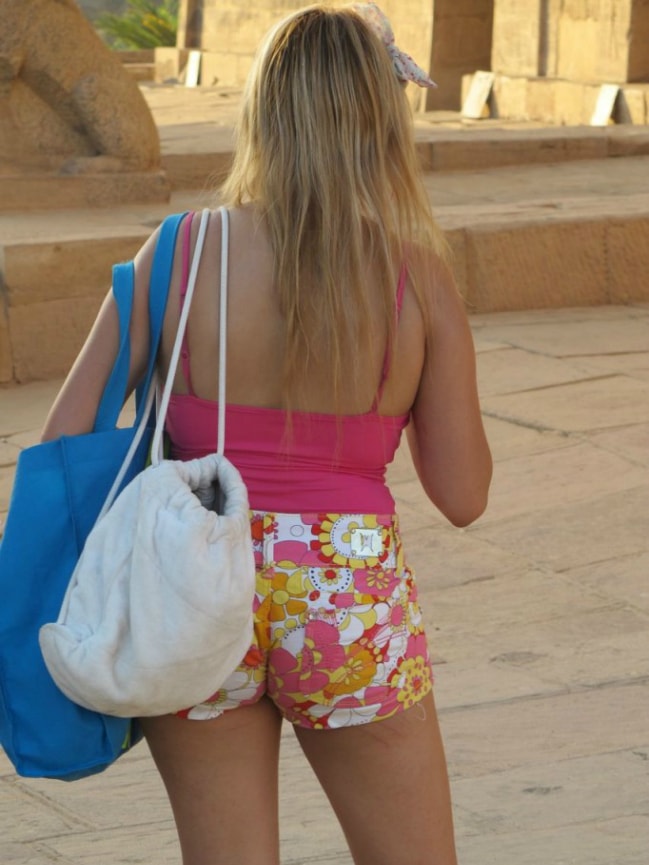 Did she read about what to wear in Egypt before arrival? Probably not.

Listen – I get it. It feels like the surface of the sun when you’re tutting around Giza, and no one wants to wear head-to-toe garb while camel-riding through the sweltering desert. I also get that Western women are powerful and equal, we do whatever we want, we don’t need a husband and no one’s the boss of us. That’s pretty much my current life motto. But here’s what’s up… we’re not in Kansas anymore.

You can’t be that mad at them for chasing you down, passionately hollering, “Oh, baby, it hurts me so bad when you walk away! How many camels?! I love you! SHAKIRA, come back to me!”

Here’s some more context. A lot of these guys have experience with three Western women – Britney Spears, Shakira and Jennifer Lopez. So if we’re rocking up to the Valley of the Kings with lacy hot pink underpants peeking out of booty shorts, just like a certain princess of pop we all know, that’s part of the reason they expect us to drop it like it’s hot and pole dance at the first ever-so-charming comment they hurl our way.

You’ll pass through a long line of touts on the way to any major attraction. These dudes are waiting for me to start singing “Hips Don’t Lie”

If you don’t follow the established cultural clothing cues, you’re going to be hassled like never before. I’m not saying their culture is wrong and ours is right. There once was a time in the Western world when women could bend over in a dress and not treat the whole room to a trip to London and France, now I can’t go to church in the US without seeing bras and cleavage all over the place. Regardless, when deciding what to wear in Egypt, just remember this phrase, “This ain’t a KFC.” (So leave your breasts & thighs at home.)

I heard several girls say, “Well, I don’t care if it offends them, I’m wearing what I want.”

If you insist on dressing your way, either Western-style where no imagination is required or Egypt-style with your uber-sexy forearms and suggestive clavicles out and proud, just be prepared. You can play the feminist card and not play by those rules, and that’s your own choice, but at least know what you’re getting into.

And don’t be offended when you get cat-called. It’s their country and their rules. 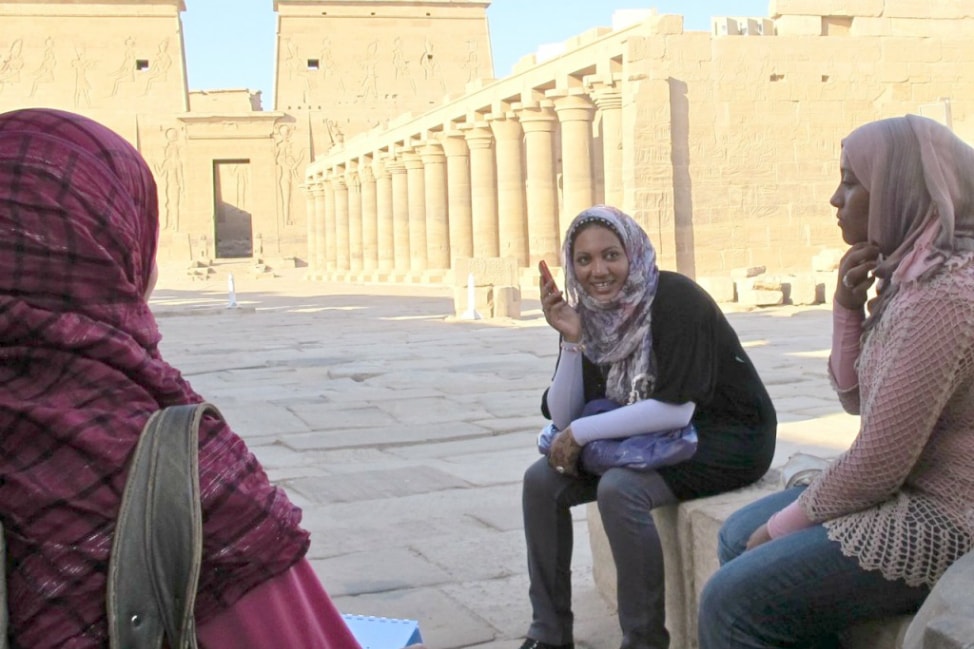 In my opinion, someone (dear Egyptian Tourism – it’s ME!) needs to conduct a seminar for all the men in Egypt on how to interact with Western tourists. I guarantee I would’ve spent many more Egyptian pounds at souvenir stands if I hadn’t been so intimidated by the catcalls and the too-close-for-comfort touts. As a result of the harassment, I bought one, yes, ONE, souvenir in Egypt, and that was a necklace I got for about $5 from a 10-year-old boy on a boat.

What NOT to Wear in Egypt

Now that I’ve gotten all that out of the way, here’s what you’ll actually want to wear in Egypt and some tips on what to pack!

You might not look like a lady of the night if you’re barely showing ankle in some sexy capri pants, but even that’s a stretch. Shorts should probably be left at home – especially if your butt peeks out the back end of your favorite pair. Exception: if you’re planning on a few days sailing the Nile on a felucca, or heading to Dahab to dive or for seaside adventures in Sharm el Sheikh, then modest shorts should be fine.

I mean thongs and bra straps, people! If your under-junk pops out when you bend over to retrieve your suitcase from the carousel, you are dressed poorly for the environment you’re about to enter.

Leave some room for the imagination, and keep the twins sequestered. You can usually get away with short-sleeved shirts and even modest tank tops in the most tourist-heavy spots, but bring a scarf or shawl to cover up in markets, restaurants and on public streets.

What to Wear in Egypt

These will help with how hot it gets in Egypt since you can’t really wear shorts or above-the-knee skirts. My favorites are from Target, but there are plenty of brands who carry them now. Remember to get breathable fabrics like cotton or linen.

Tops that cover the collar bones and arms

It’s safest to just keep your shoulders, collarbones, and chest covered. The easiest way is to just bring higher-neck tops and dresses.

Another way to stay cool is to wear loose, breathable pants. It doesn’t seem like they keep you cool, but I promise they do! Here are some flowy pant outfits to help you find a look that matches your style.

Bring a shawl or scarf to cover up

And, of course, if most of your closet consists of spaghetti straps or lower cut tops, and you don’t want to go out and buy a whole new wardrobe, then get a shawl or scarf to keep things covered. Like I mentioned above, that dress on its own is obviously not appropriate. That’s why I wore a big scarf wrapped around my top besides this photo.

1. Not ALL Egyptian men are going to harass you.

I made some ADORABLE, polite male friends while I was there. I also didn’t have any discomfort as a Western woman in their company.

2. Just because you’re dressed appropriately doesn’t mean you’re not going to get hassled.

Keep your head down and avoid making eye contact with touts, as that can be seen as encouragement. Don’t get sucked into the trap of chatting or accepting a gift someone tries to place in your hand. That happened to me and I had to be smuggled out of Queen Hatshepsut’s tomb secret-service style. (By two handsome Australian guys… so it wasn’t all bad!)

And as I mentioned, I did have an unfortunate groping incident at a gas station in the middle of the night somewhere on the Sinai Peninsula. We were in the midst of an 18 hour bus ride, just stopping for a potty break. It took me a second to really wake up, so I was not with the rest of the group when I entered the restroom. Despite being appropriately dressed, I guess the bathroom attendant just thought I need a good middle of the night groping, so he obliged. Lucky for him, I was still too groggy to beat the sense back into him, and an international incident was narrowly averted.

3. Western women just passing through Egypt only get a glimpse of what it’s like to live in a culture where women are oppressed.

Check out these articles for some insight on what’s been going on since the revolution.

Egypt, over all, was a great experience. But, yes, it’s still a conservative country, and to be respectful, dress appropriately! I hope this what to wear in Egypt guide will help you with your packing! 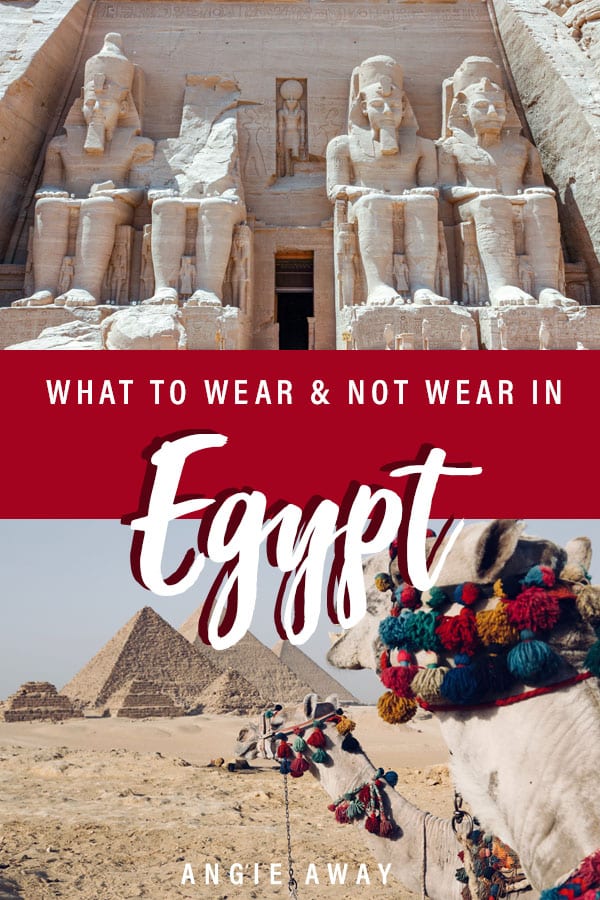 57 thoughts on “Undressed in Egypt | The View From My Soapbox”