Now that we’re all aware of my strong feelings about dressing appropriately in Egypt, let’s go to the Great Pyramid of Giza! 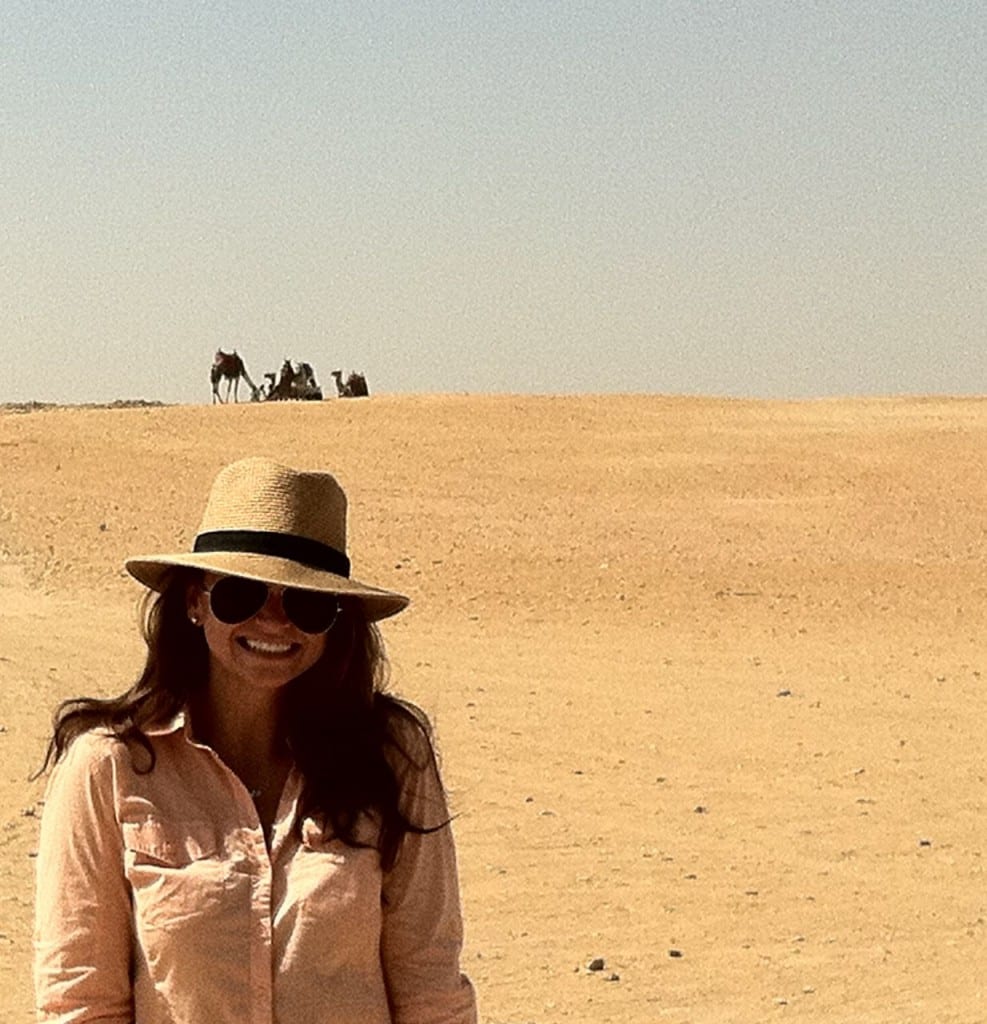 Just hanging in the desert

With just 13 days on the ground in Egypt, I chose the jam-packed On The Go King Ramses itinerary to help me cram a lifetime of experiences into a very short stay. I landed in Cairo late on a Friday night and was transported with two other gals from my flight to our hotel. One of them turned out to be my roommate for the trip, the lovely Steph, a Kiwi currently living in London. Of course we became best friends and confidantes over the next two weeks.

The first stop on the adventure was naturally the biggest, oldest and most mysterious of all ancient Egyptian sites – the Great Pyramids of Giza! Ahhhhhh! Ticking off that bucket list one by one… 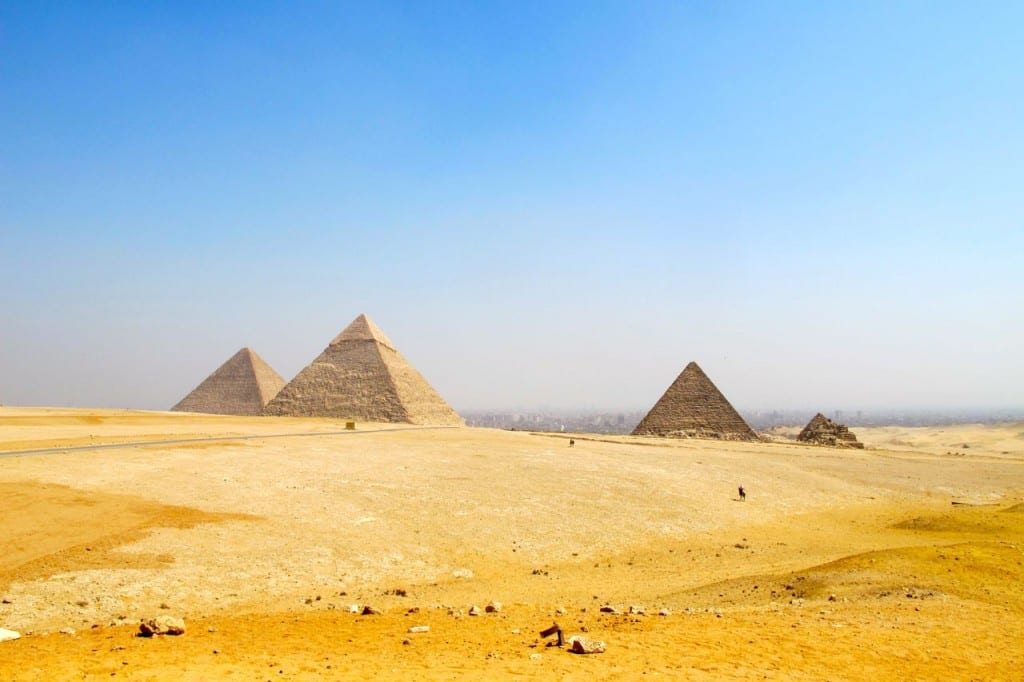 The Giza Necropolis, home to the Khufu, Khafre & Menkaure pyramids

The pyramids are tucked just on the other side of a gray, industrial-looking complex, and like a mirage, they materialized into view as we were riding along in our bus. As we drove closer, the vast plain of gold sand stretched out in every direction and the size of the pyramids became more evident. 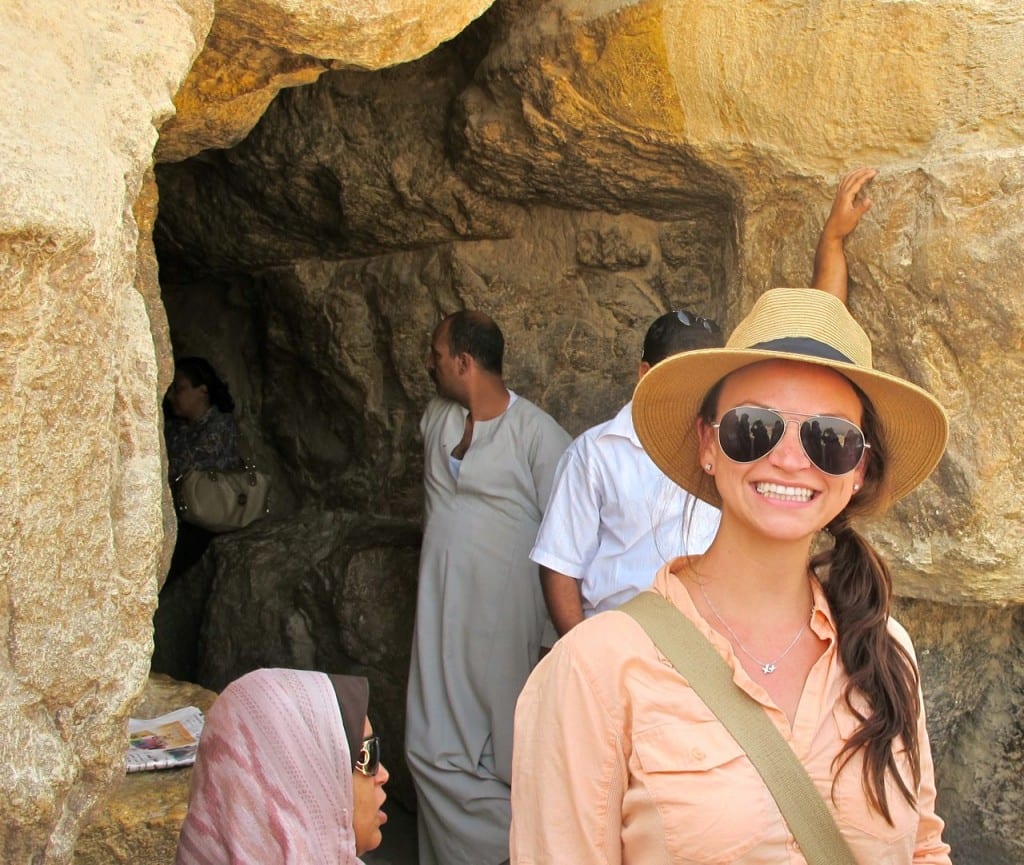 Just your average day standing on one of the world’s oldest structures. No big deal.

The oldest of the Seven Ancient Wonders of the World, the largest pyramid belonged to Pharaoh Khufu (Cheops in Greek). For 3,800 years, Khufu’s pyramid was the world’s tallest man-made structure, at about 500 feet tall. (Check out this cool infographic of the world’s tallest buildings and how the Great Pyramid stacks up.)

Look how big those stones are!

The Great Pyramid is made of 2.3 million limestone blocks, a fact our guide Haytham quizzed us on again and again. Did you know that up until about 600 years ago, the pyramids were once covered in casing stones, a highly polished white limestone layer? What we see today wasn’t visible back in Egypt’s heyday.

The original pyramids would’ve reflected a blinding light from the stones. And, while for thousands of years it was believed that slaves constructed the pyramids of Giza, today it’s accepted that skilled workers actually built the monuments. Archaeologists estimate that 20,000 to 30,000 Egyptians built the pyramids over the course of 80 years.

Under Haytham’s tutelage, I felt like I might have the potential to one day become an Egyptologist, but I’ve since forgotten most of the facts – sorry, Haytham! 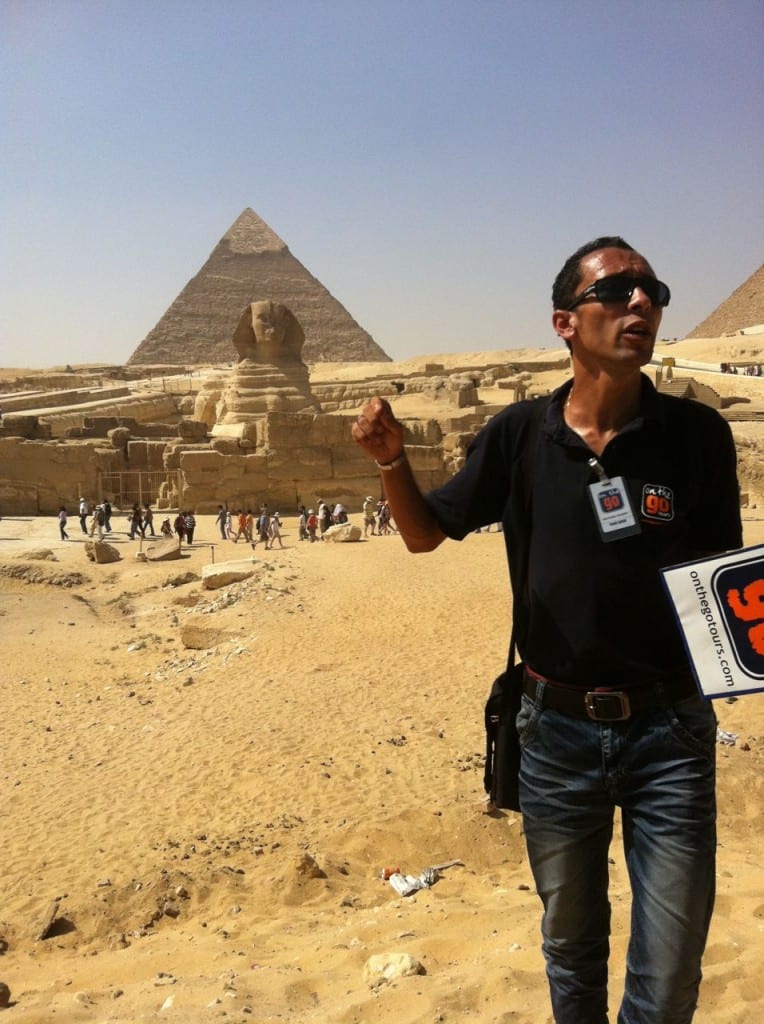 Haytham telling us all the facts

After a humid, claustrophobic trip inside the smallest of the three Pyramids of Giza (spoiler alert: no mummy or Indiana Jones-style adventures were to be found), we made our way to the eastern side of the Giza necropolis to meet its most famous resident and guardian – the lion-headed Great Sphinx of Giza.

The Sphinx is smaller than you thinx

The Great Sphinx is one of the world’s largest and oldest statues, but no one really knows who it was modeled after, when it was built or by whom. 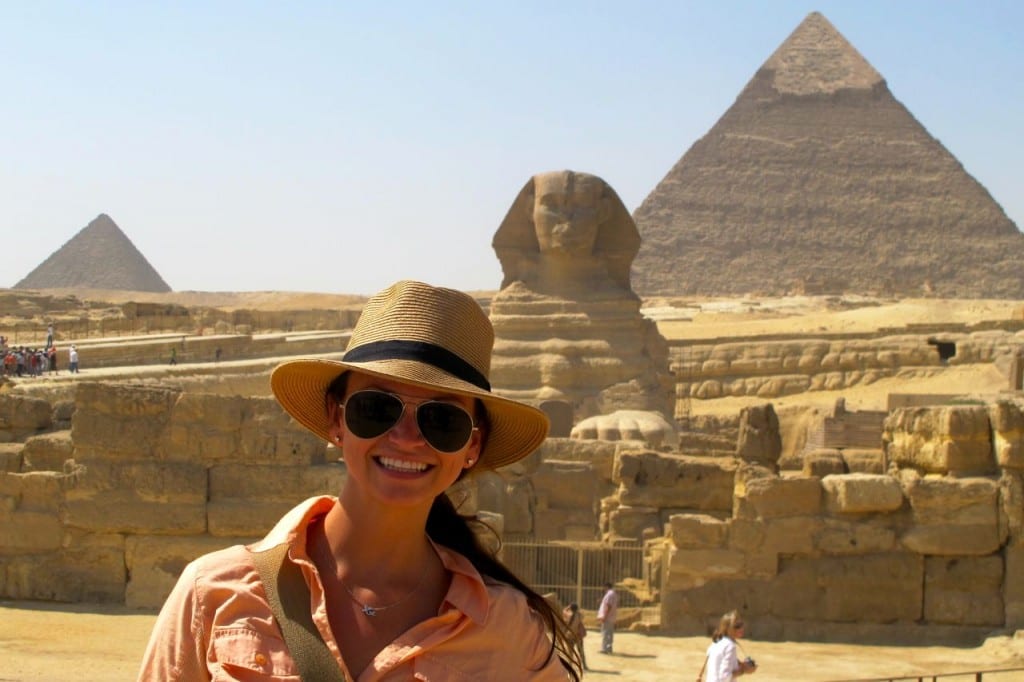 After the Giza Necropolis was abandoned, the Sphinx was buried up to its shoulders in sand. Ultimately several pharaohs excavated the statue over time, beginning around 1400 BC, with the most recent excavation taking place in the 1920s. While many believe the Sphinx’s nose was knocked off by a cannonball misfired by Napoleon’s soldiers, that’s not true.

Examination reveals the nose was actually chiseled off with tools by a guy in 1378 AD who was mad that the Egyptians were leaving offerings for the Sphinx in hopes of a good harvest. 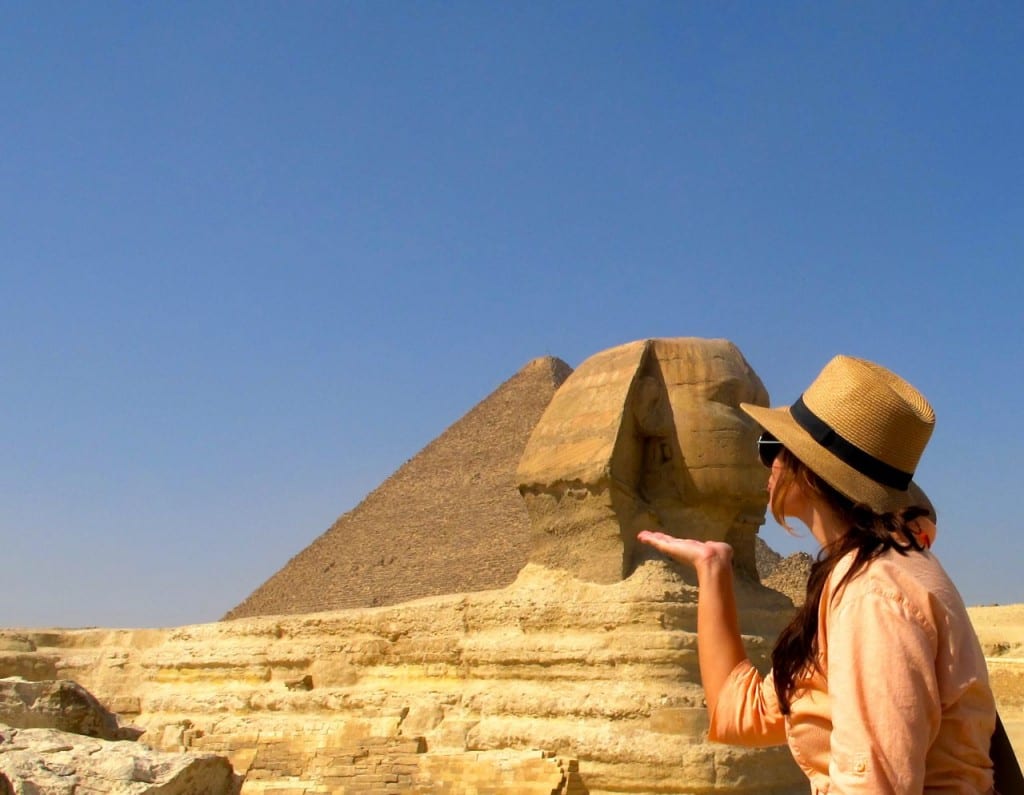 My attempt to get a smooch in Egypt 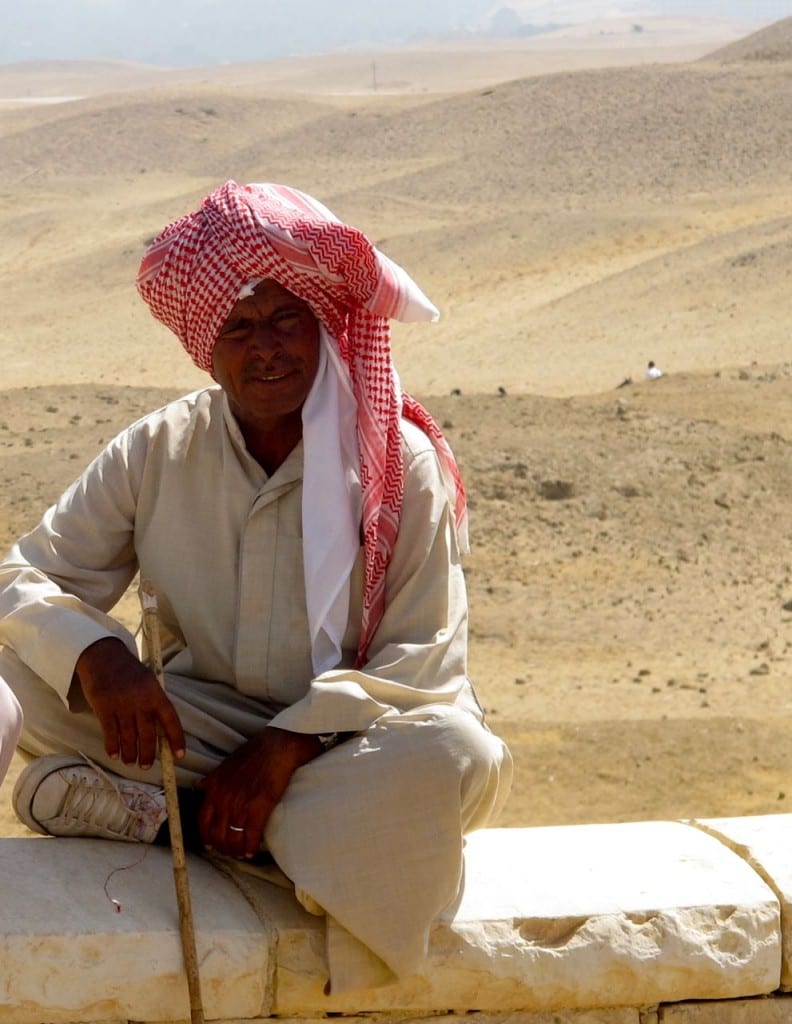 The pyramids & the Sphinx weren’t the only boxes on my life checklist that needed ticking that day. It was time to tame the beast of all beasts, the bold, brash, manly, smelly, cranky… camel. 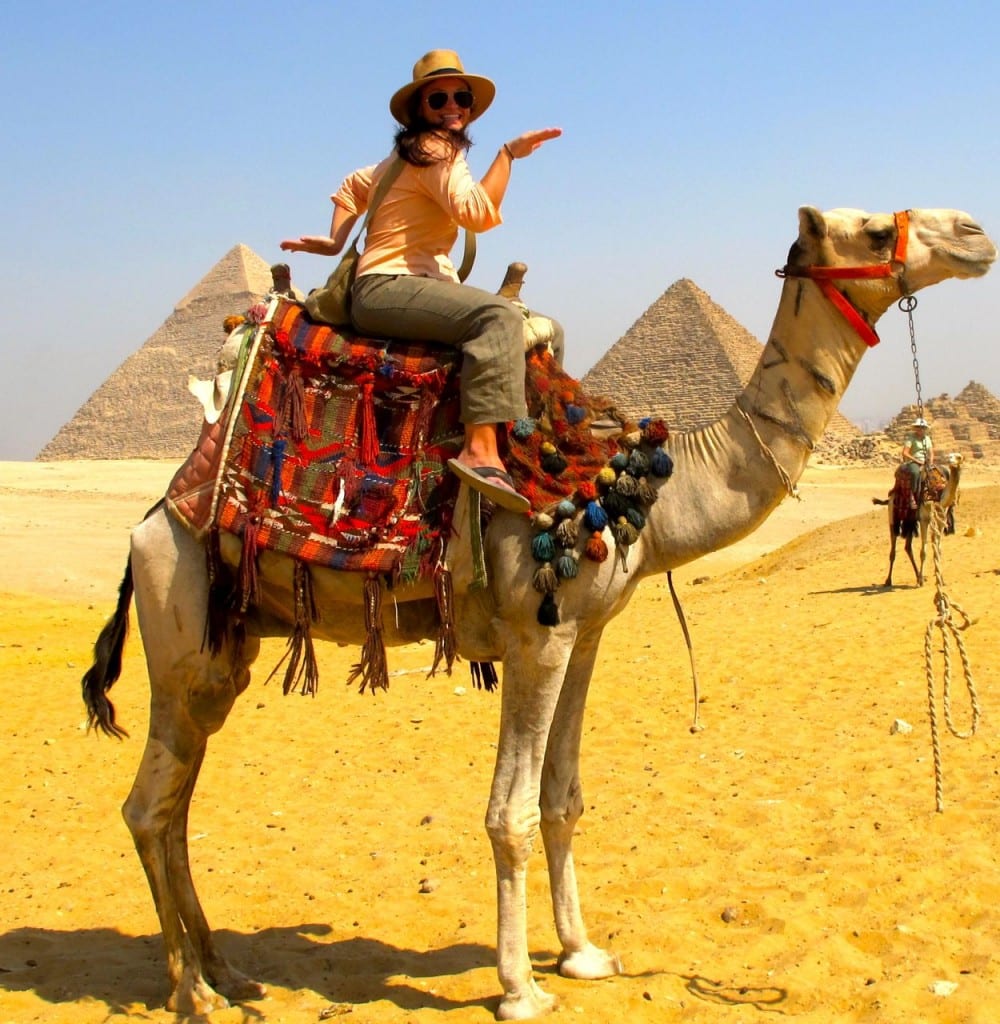 I walked like an Egyptian. On a camel. In front of the Great Pyramids of Giza. So yeah, I can go home now.

Like every other animal I’ve ridden this year, my camel was stubborn and ornery and probably would rather have thrown me into the sand than have me singing a Bangles’ song from the 80s atop his camelly humps. Whatever.

For about $20, you, too, can hitch a ride and take some of the most fun photos ever. 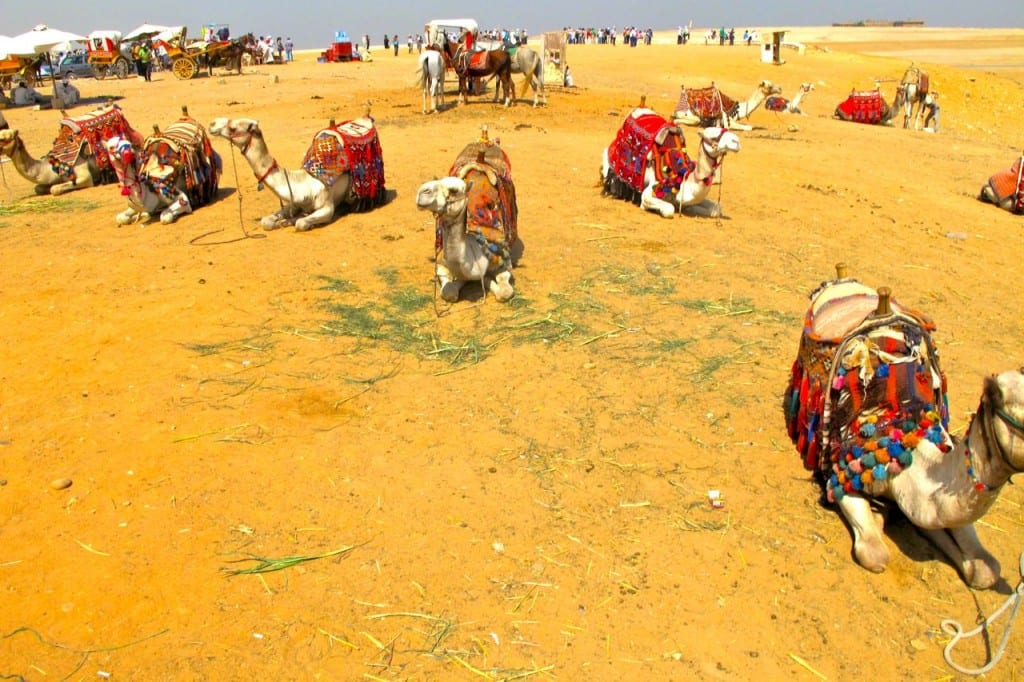 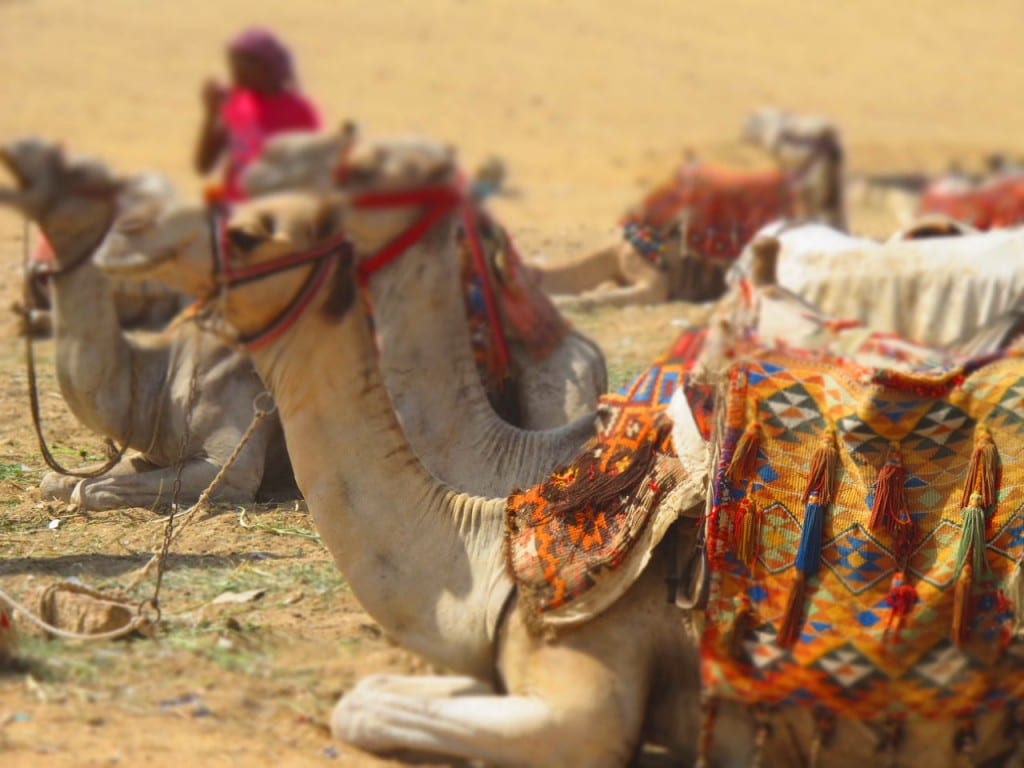 I don’t know if you’ve ever mounted a camel before, but it’s kinda scary… as evidenced by the squealing tourists all around me who were surprised by how fast you go from 2 feet to 8 feet off the ground.

My camel’s name was Michael Jackson. 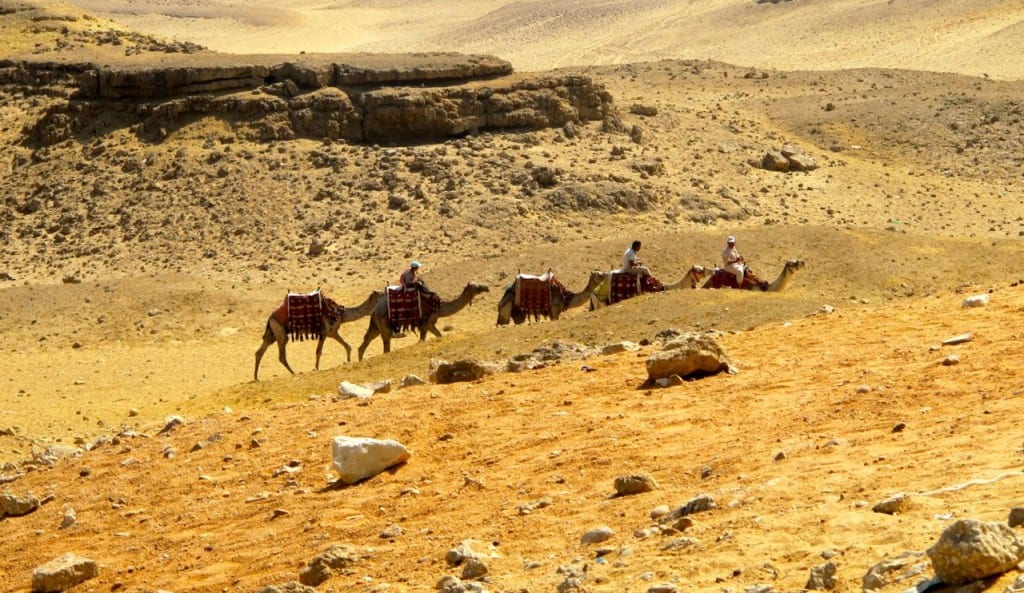 If you know anything about Angie Away, you know this entire day had me over-the-moon stoked. There’s something about a dream coming to fruition that feels so stinkin’ good! I can’t even remember how long I wanted to visit this spot on the planet, and finally, there I was!

In front of THE SPHINX! Inside a PYRAMID! On a CAMEL IN THE DESERT!

It didn’t matter that it was 1,000 degrees or that I was still exhausted from dancing until 5 a.m. in London two nights before or that touts were trying to offer thousands of camels in exchange for my hand in marriage — I was finally in Egypt and I was a very happy wannabe archaeologist adventurer.

1. In post-revolution Egypt, tourism is way down, so now is an opportune time to visit the major tourist attractions.

In this area that’s usually crawling with thousands of tourists, we had unobstructed pyramid views and no lines or waiting for anything in the middle of the day. GO NOW.

2. Wear headphones if you’re alone. When touts come at you trying to get you to buy alabaster pyramids or are pestering you about postcards, just point to your headphones and keep walking.

3. Avoid eye contact, starting conversation or accepting any help with taking pictures or getting directions. That just highlights that you’re an easy target! If you want to keep your Egyptian pounds in your own pocket, avoid anyone who offers assistance. (It sounds terrible, but it’s the only way to go. You will be suckered FAST if you don’t follow this rule!) If you want to be polite, say “La Shukran,” which means “no, thanks.”

Have you been to the Great Pyramids of Giza? Were you surprised at how small the Sphinx is? Did you get harassed by touts? Were there big crowds? Tell me all about it in the comments!

34 thoughts on “Great Pyramids, Camels & a Sphinx – My Day in Giza”