I have yet to hop on the ancestry.com/23andMe DNA-testing bandwagon, so I don’t have the clearest picture where my relatives come from. Some of my great-great-grand peeps came to Ellis Island at the turn of the century from Bohemia, but other than that, I’m just your average dubious origin American.

My tall, strapping husband on the other hand, is about as Irish as St. Patrick’s Day. We haven’t DNA tested him yet, so I suspect there are Hulk / Captain America strains in his background, too. But his last name kinda betrays the rest. Normoyle. 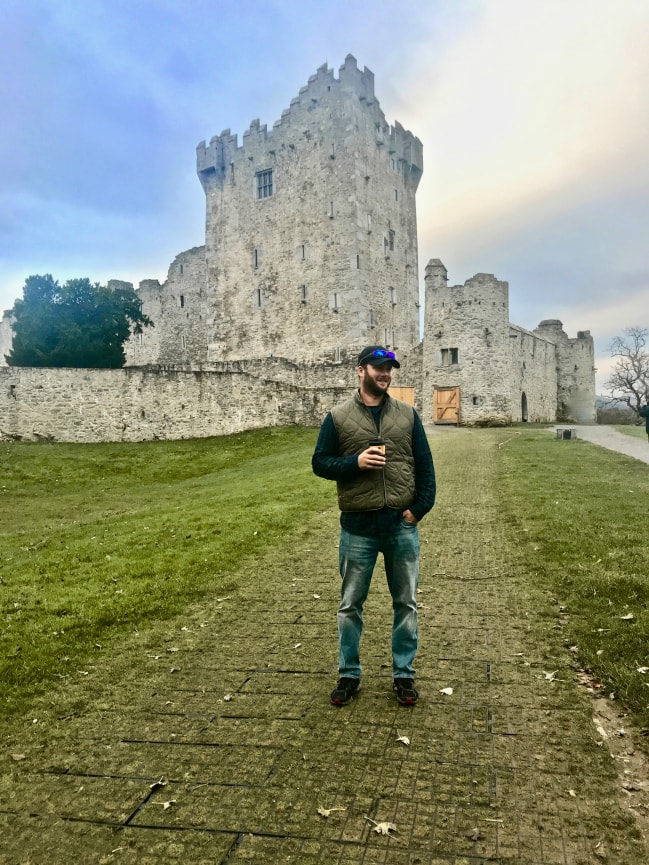 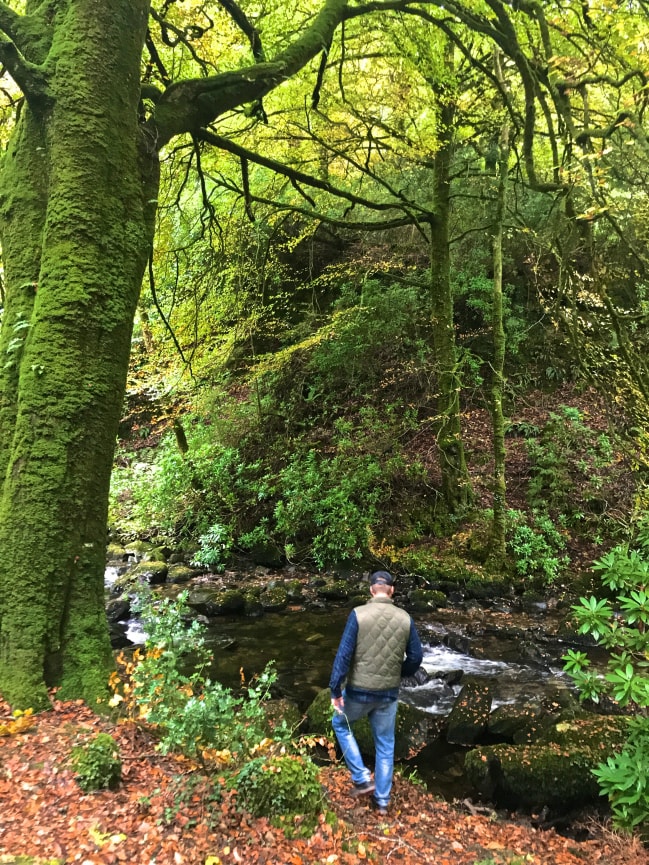 It’s not the most common last name in the U.S., as I discover every single time I book us a reservation or make him a dentist appointment.

“What was that? M or N? Mormoley? Normal? Mornoyle? Merfledurble?” Just forget it, y’all. Put it under Rick.

When planning our epic Irish road trip, I hoped to connect with some local Normoyles, so I could bear his name proudly with people who could actually pronounce it. In preparation for our Irish road trip, I did a quick Google search. 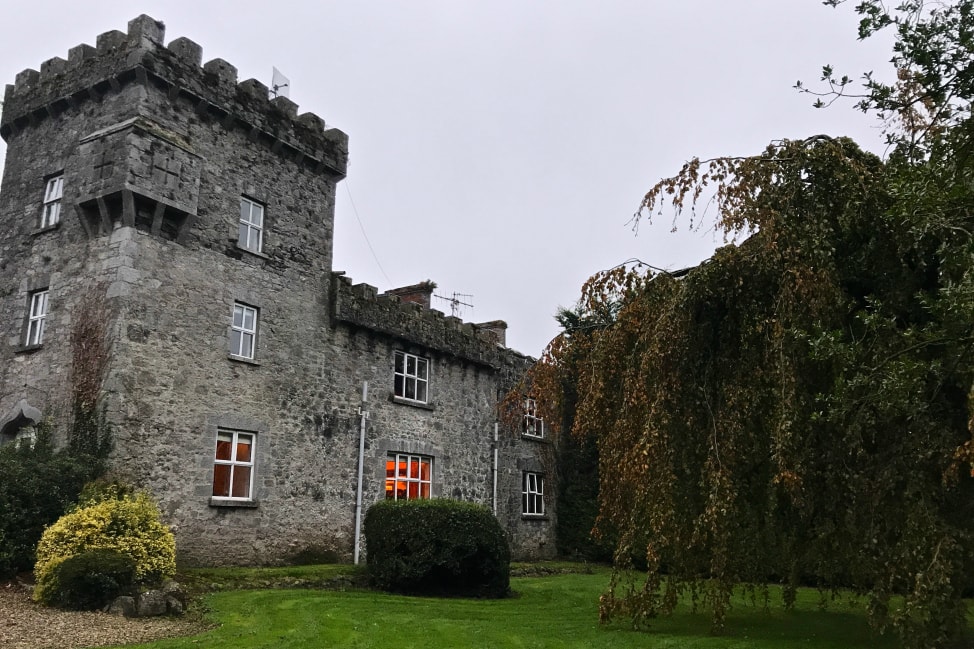 And that’s how we found Fanningstown Castle, and Rick’s family. (Maybe.)

Who needs official family trees and census records and genealogy websites when you can just Google your last name and find long-lost distant relatives with Irish castles?! Thank you, Internet!

I dug up the contact info and sent an email with our peculiar story to a Mrs. Mary Normoyle. She responded and we were able to book the one available night left in October.

WHEW. In our seven nights on the Emerald Isle, Fanningstown Castle was the place I was most excited to check into.

I resisted the very strong urge to call her Auntie as she gave us a tour of the facilities.

“This building very likely started as a defensive structure owned by the Norman Maurice family around 1285,” she said. Like anything old in Europe, possession changed hands time and again. The English, the Welsh, the Irish, the Normans – over hundreds of years, the layers upon layers of owners stacked up. 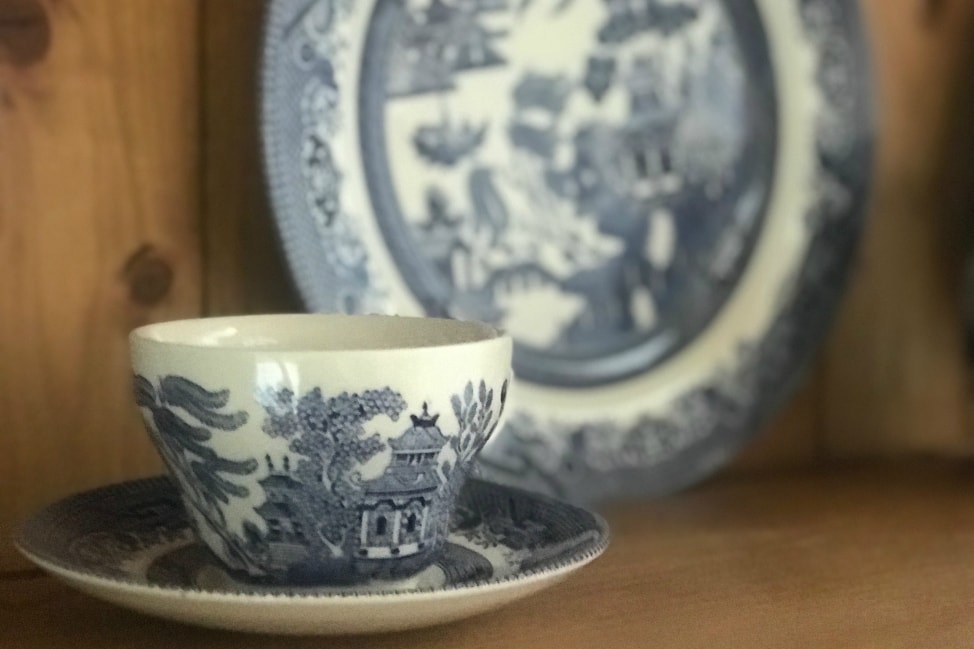 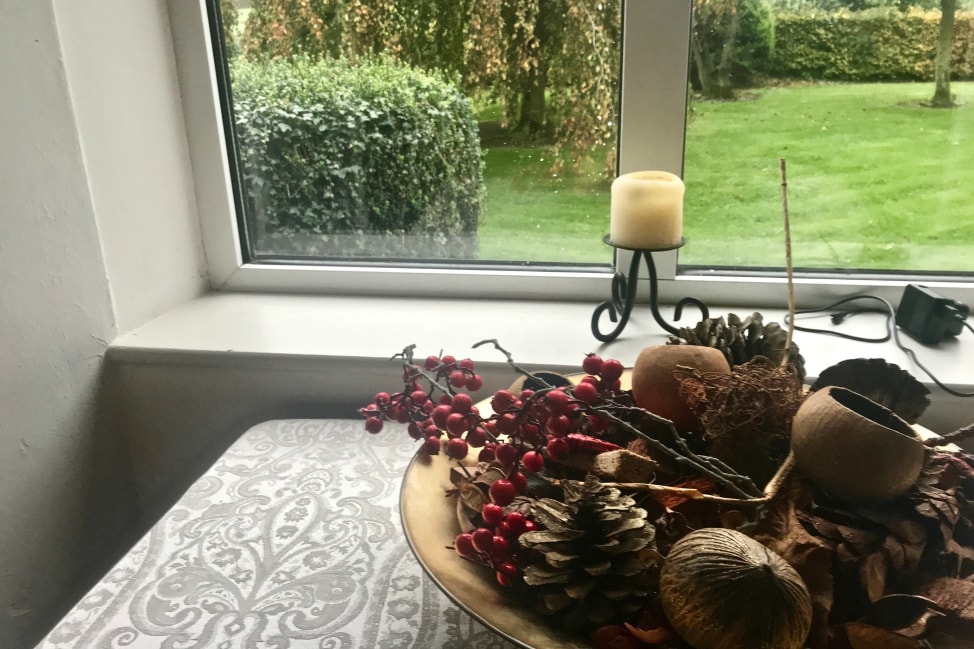 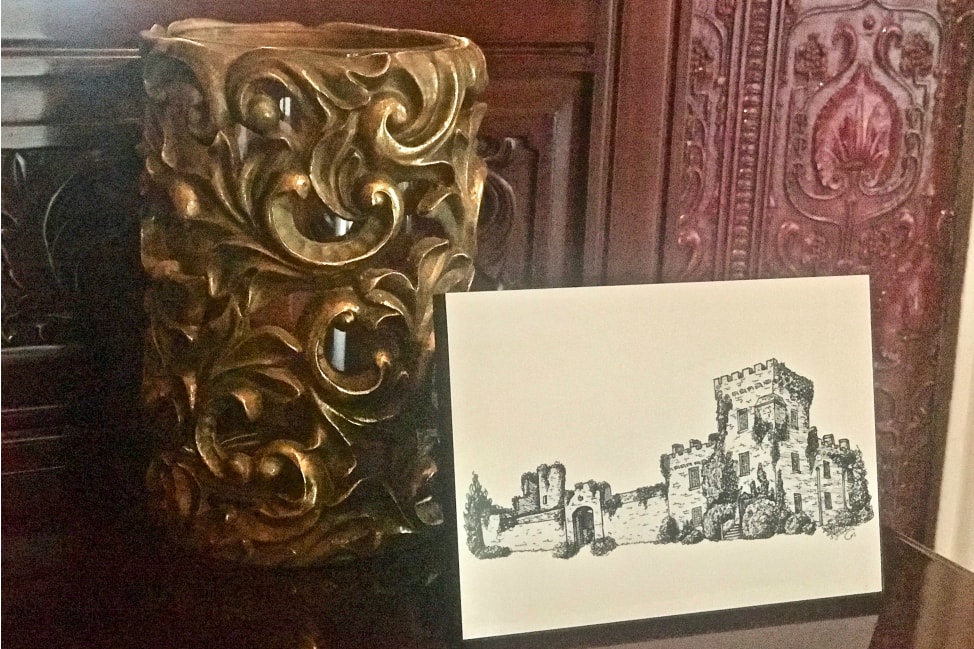 As Fanningstown was a wee outpost for a much larger feudal castle compound, there’s not a wealth of documentation, but being somewhat off the radar surely lead to its survival through the Desmond Rebellion and the Oliver Cromwell periods. Various renovations and improvements, from battlements to Gothic bartizans, were added in the 19th century. And many years later in 1936, the Normoyles acquired the property. It’s been in the family ever since, and now reflects a hodge-podge of structural and design influences. 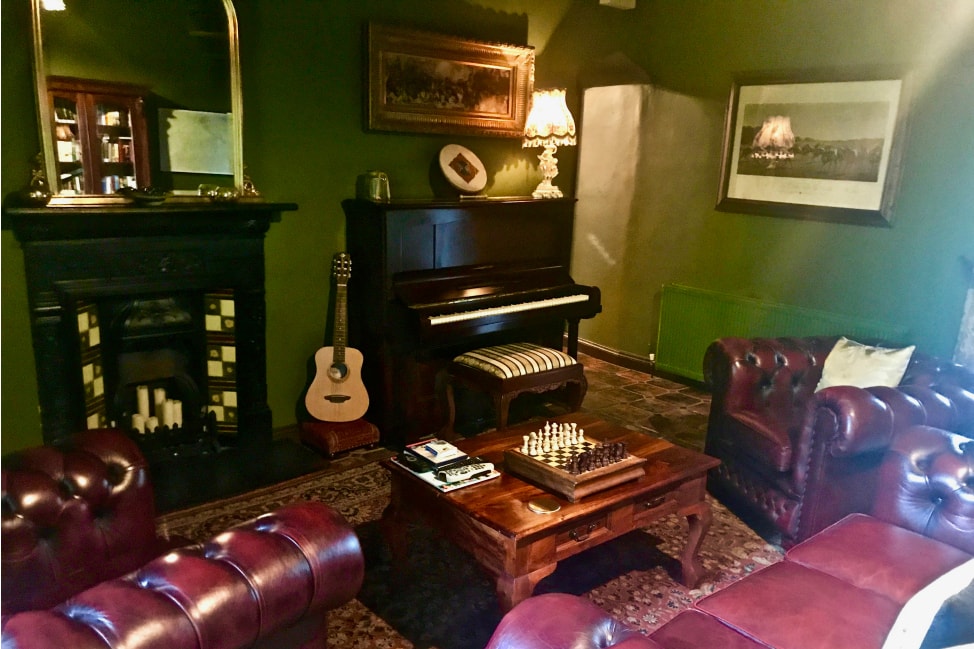 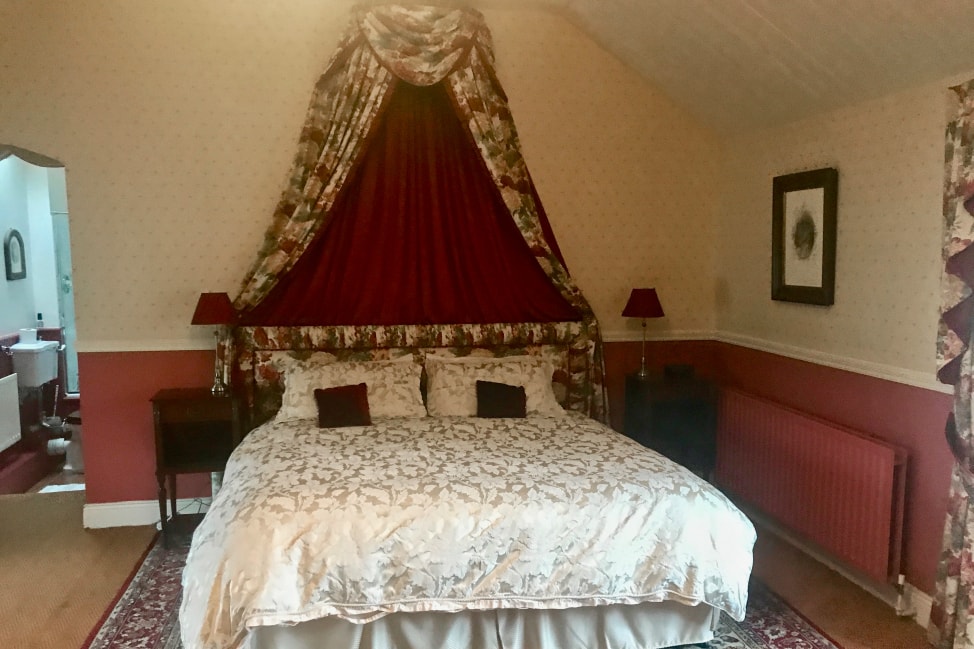 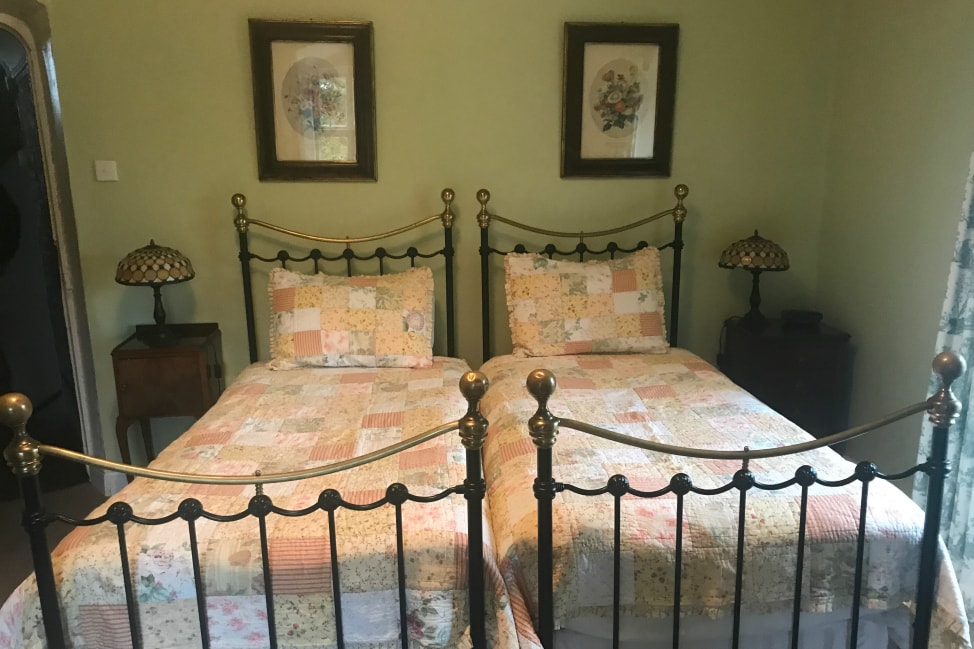 Mary showed us from room to room, filled with antiques, big, soft beds and a surprising amount of natural light. Fanningstown Castle has five bedrooms and three bathrooms, so it’s ideal for a big group vacation. Or a wedding.

WHY DIDN’T WE GET MARRIED HERE? 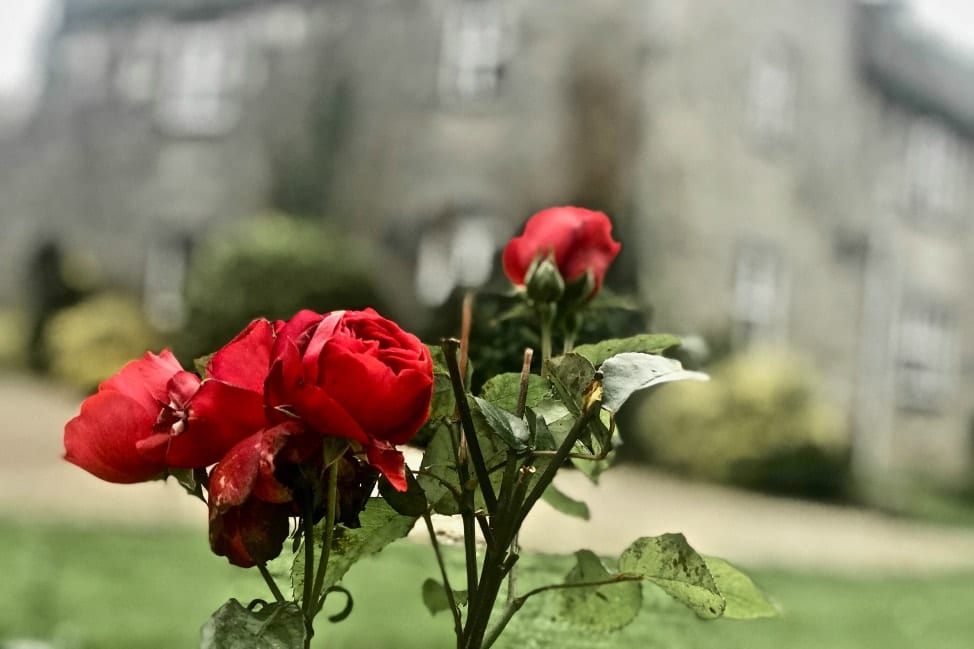 Words don’t quite convey how much I wish we’d opted for this family castle in Ireland instead of The Bahamas for our destination wedding. If you’ve been with us since our insane nuptials, you know I say this about every new place we visit. (See: Kauai. St. Lucia.)

No matter. We donned our Games of Thrones gear (Get your very own Daenarys Targaryen costume here) and took a few fun photos in the garden to commemorate our 2nd anniversary.

(Side note: Can you believe this magnificent man wore a wig? He is literally the best husband in the world.) 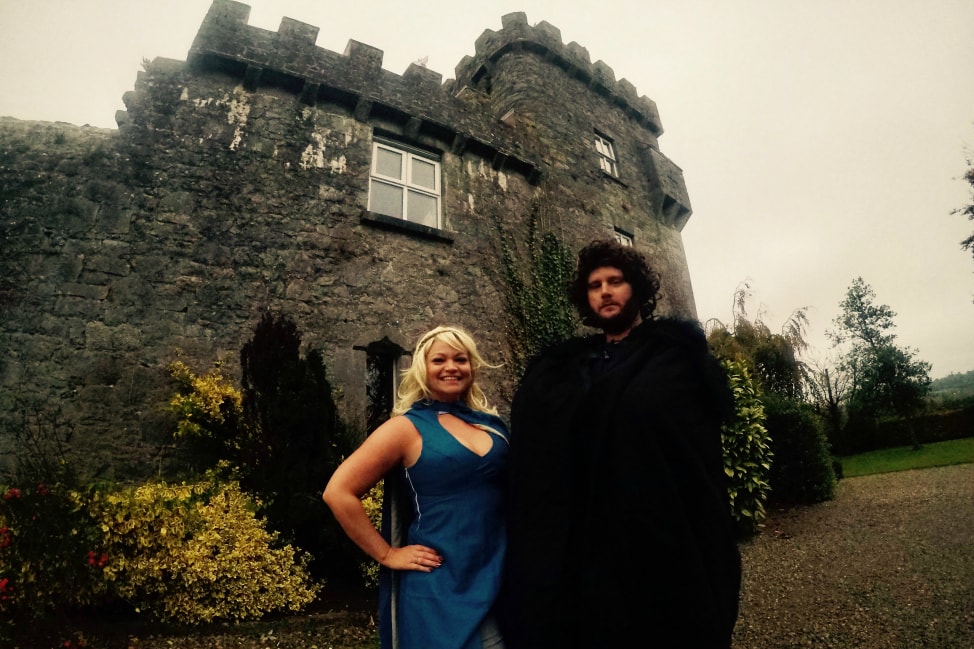 I am hers and she is mine, from today until the end of my days. 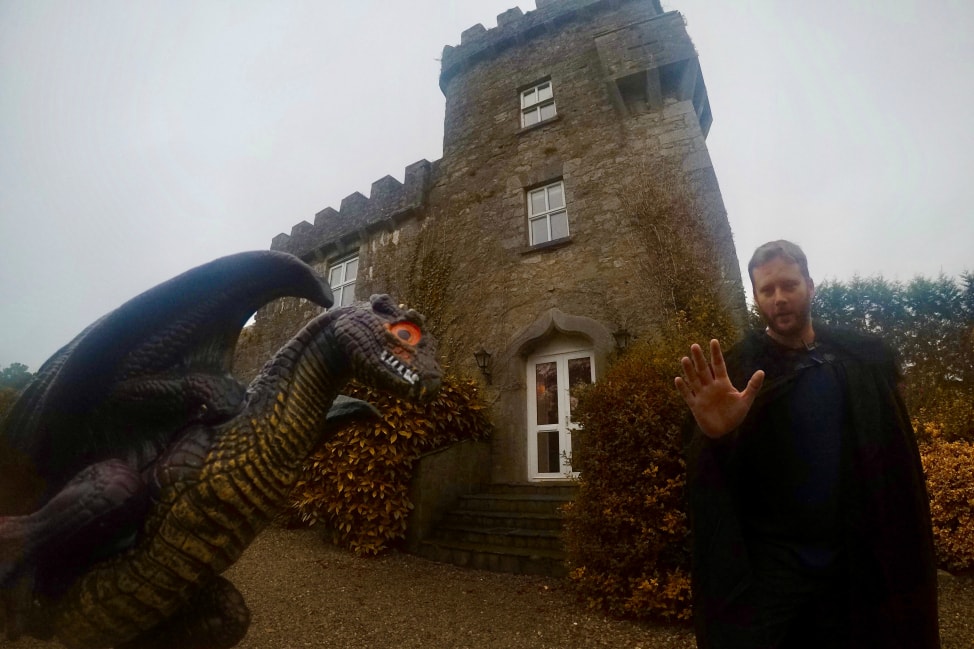 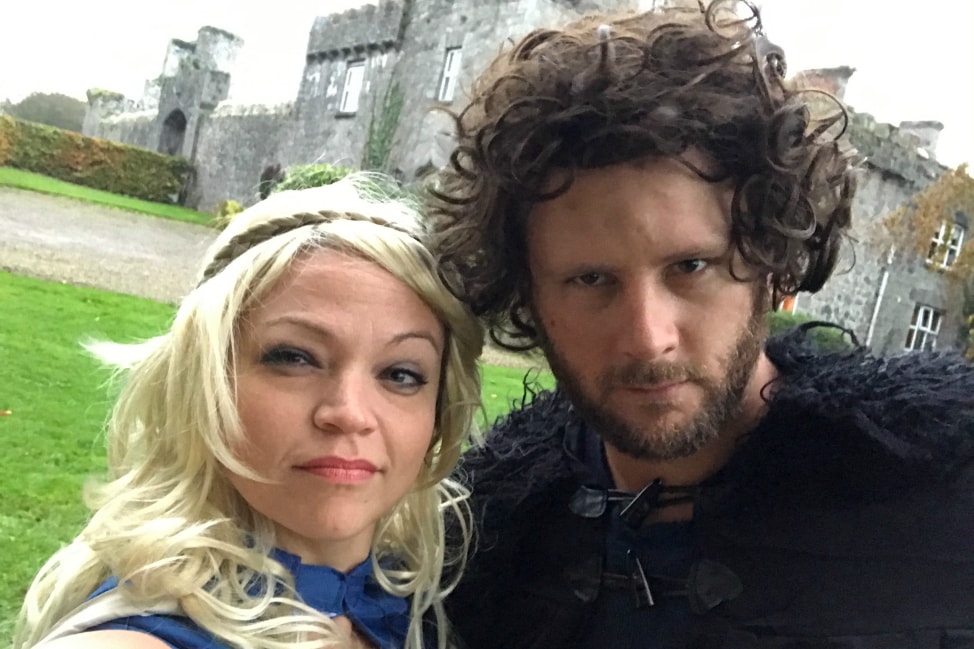 Our impromptu vow renewal as Jon and Daenerys (Don’t overthink it, he’s not my nephew!)

Our last stop on the house tour was the bright, modern kitchen, fully stocked with everything one would need to self-cater for a big group, and treats and snacks for us! So many snacks! Aunt Mary has to be related to Rick. 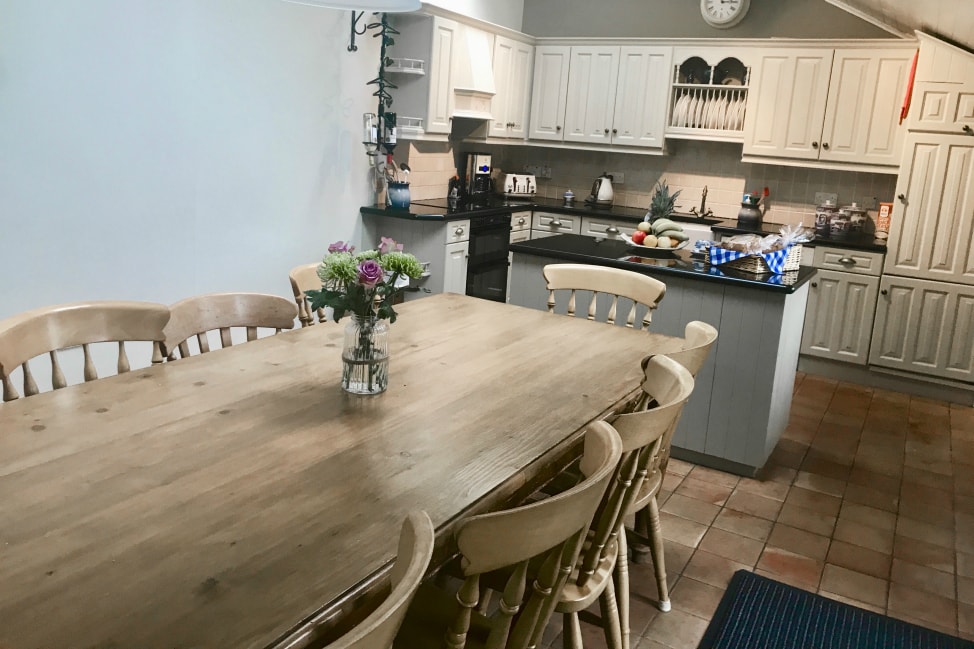 While we had the full kitchen available, there was no time to plan a grand meal and we wanted to maximize our remaining time in Ireland, so we wandered down the road a mile or so to Timmy Mac’s bistro for a really yummy dinner.

Afterward, we cozied up in the sitting room. Rick built a roaring fire and we drank the wine Auntie Mary left us. (Note: we still have no idea if they’re actually related, but who even cares? She was amazing, so I have to assume they’re distantly related!)

With the whole place to ourselves, we felt like the fanciest poor immigrants to ever sleep at the king’s house. 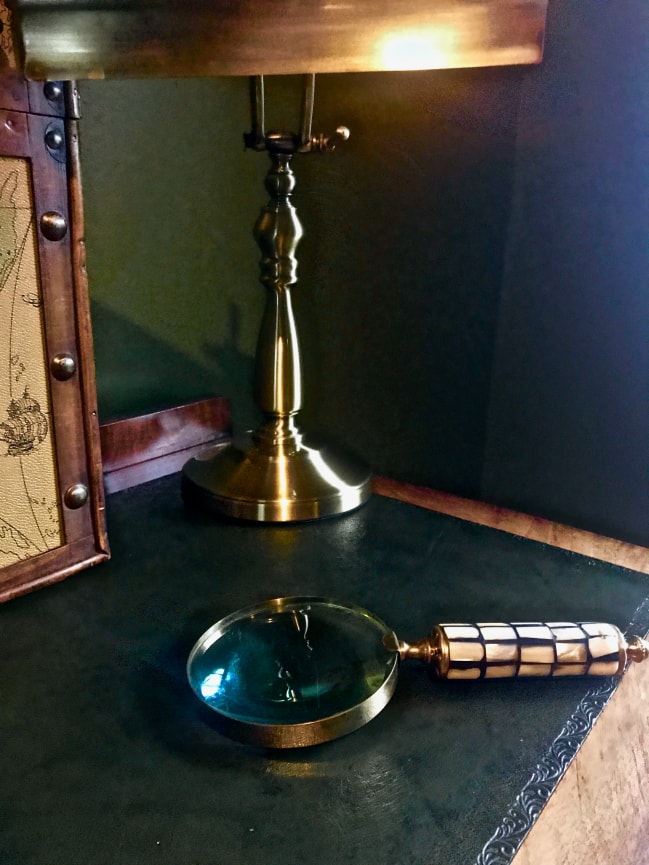 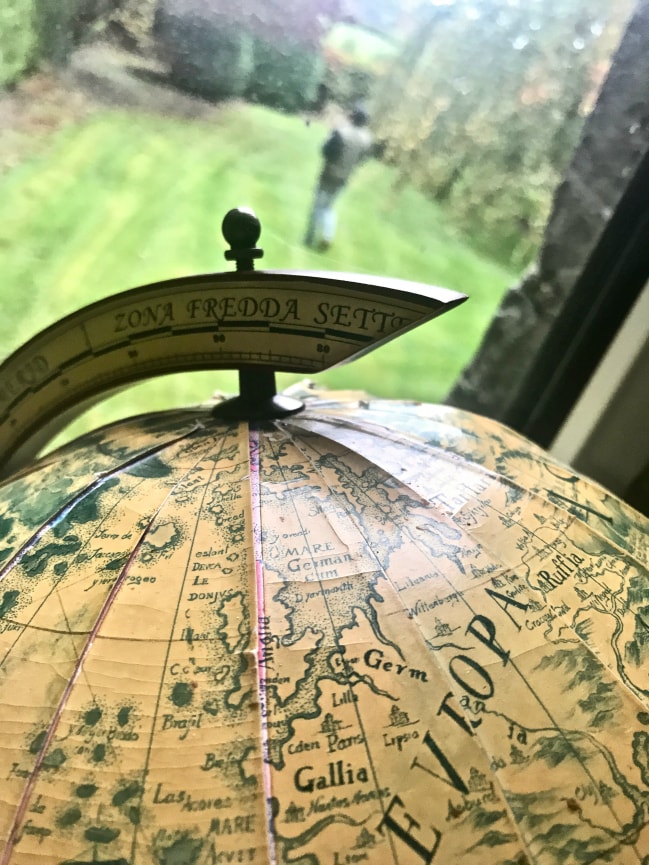 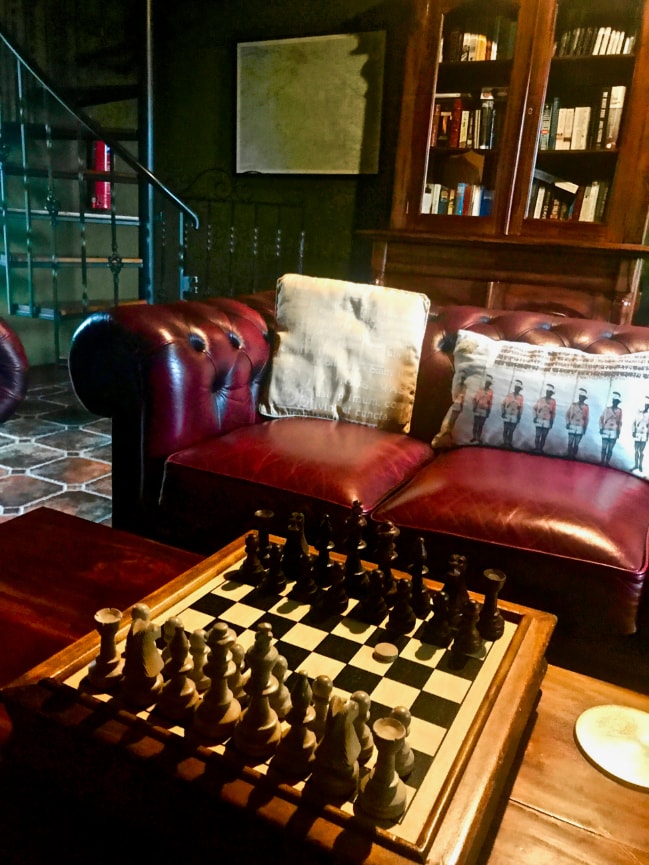 Confession time. We slept with a few lights on, because, if you must know, 800-year-old castles with stone turrets, spiral staircases and shadowy corners aren’t NOT scary in the pitch dark. Even for a hulking Irishman. 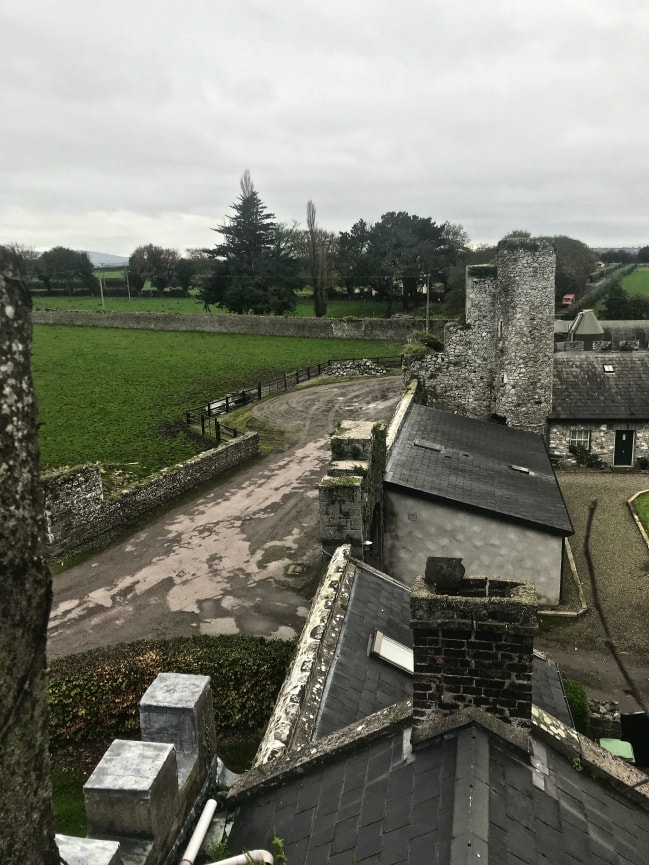 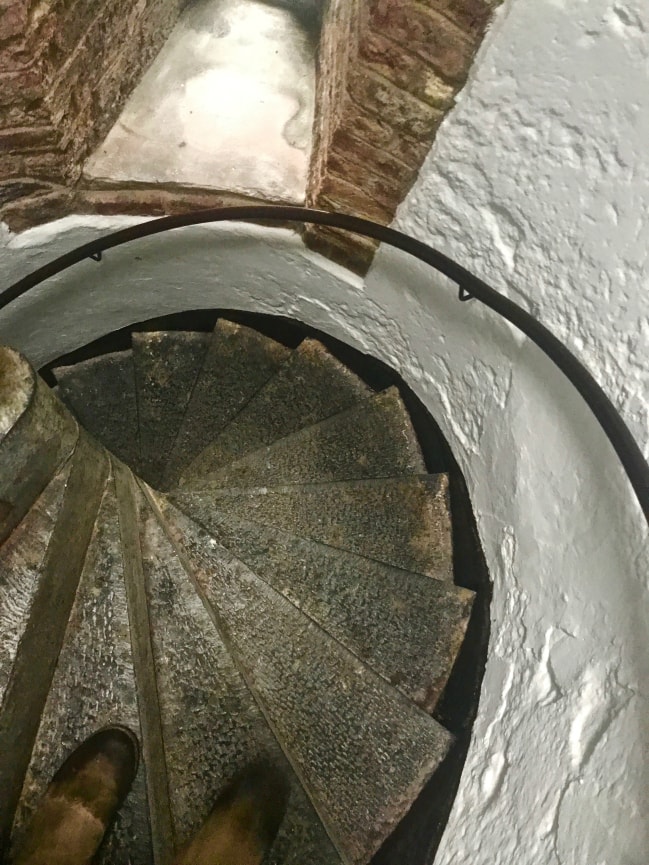 Fanningstown Castle was the very last stop on our whirlwind Irish road trip, and happily, it was the most relaxing, too. After our terrifying horse cart experience in Killarney National Park earlier in the day, relaxing in front of a roaring fire was all I ever wanted in life. I regretted not having more time to spend, but I felt that way about the whole trip. I could see myself very happily spending long mornings meandering in villages and afternoons lingering over Guinness pie in pubs. But that’ll have to wait until our next visit to the Normoyle homeland. 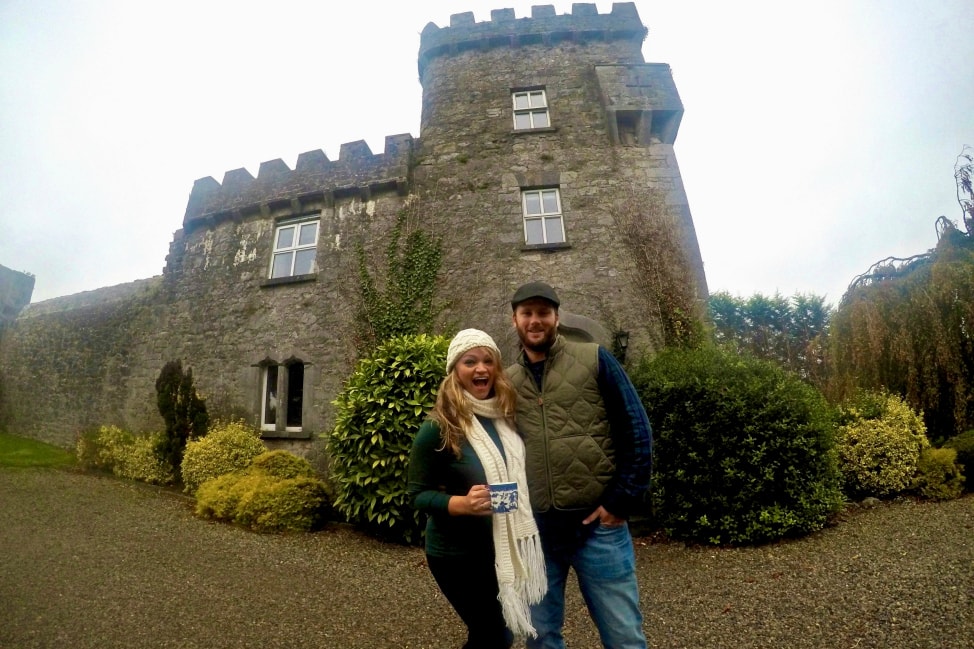 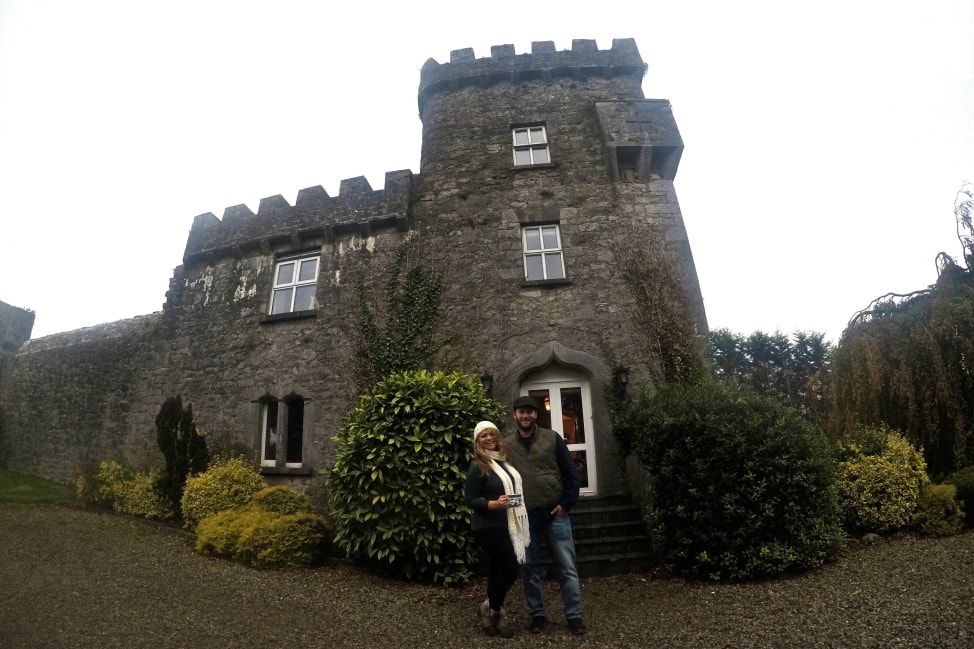 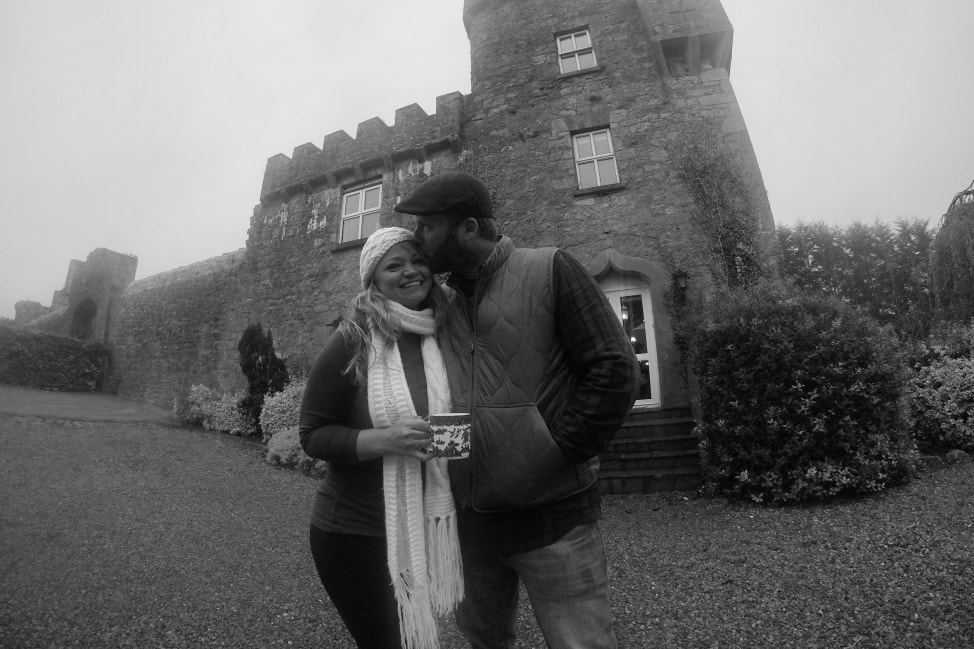 If sleeping in a castle in Ireland is not on your bucket list, go ahead and slide a visit to Fanningstown Castle to the top spot. We thank you on behalf of all the Normoyles!

Would you sleep in a castle… with the lights out?! Is Ireland on your bucket list?

4 thoughts on “Irish Roots | One Night at Fanningstown Castle”