If you’ve checked out my Instagram lately, you may be one of those folks who thinks Rick and I moved to the Emerald Isle. Truth is: we returned to Florida in October, but took enough dreamy photos to last forever.

And my favorite photogenic spot: the Dark Hedges!

If you’re road tripping around Northern Ireland, the Dark Hedges are a must-see – and not just for Game of Thrones fans who recognize the gnarled beech trees and shady lane as the Kingsroad. Arya Stark used this route to escape King’s Landing, and soon after, the quiet country road with its twisted limbs and mystical fog became a bigger hit than ever before.

But the Dark Hedges have been around much longer than the Starks and Targaryens, planted more than 200 years ago by the Stuart family. They had the foresight to know that one day, the trees would grow into a dramatic entrance to their Gracehill House. I doubt they could’ve dreamed that their quiet country road would someday become a superstar on both HBO and Instagram. 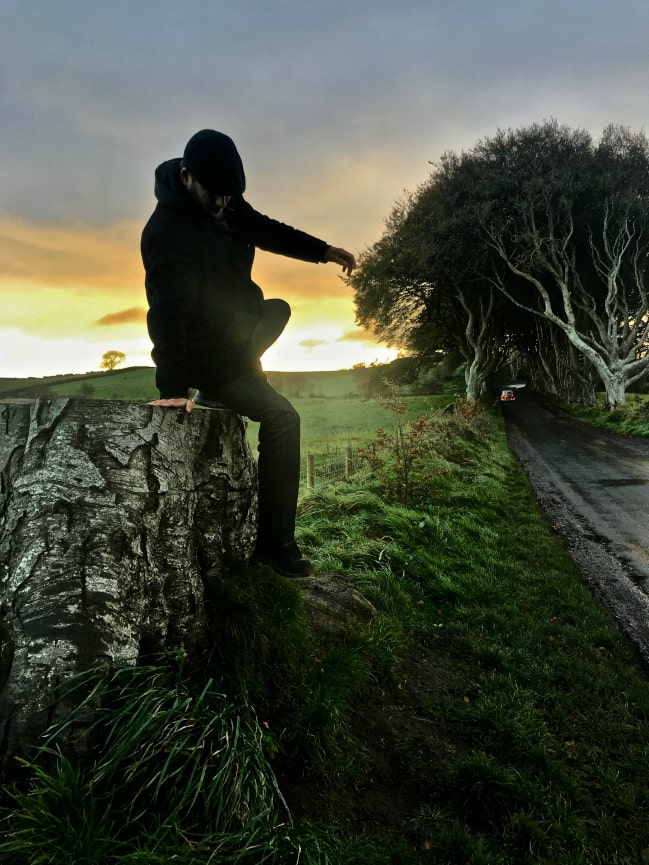 Unfortunately, time and traffic have taken a toll on the road and its sentinel guardians. Less than 2/3 of the original 150 trees remain. As of about a week after our visit, the local government closed the road to auto traffic to mitigate future destruction of the roots and limbs.

RELATED CONTENT TO HELP YOU PLAN YOUR IRISH ROAD TRIP 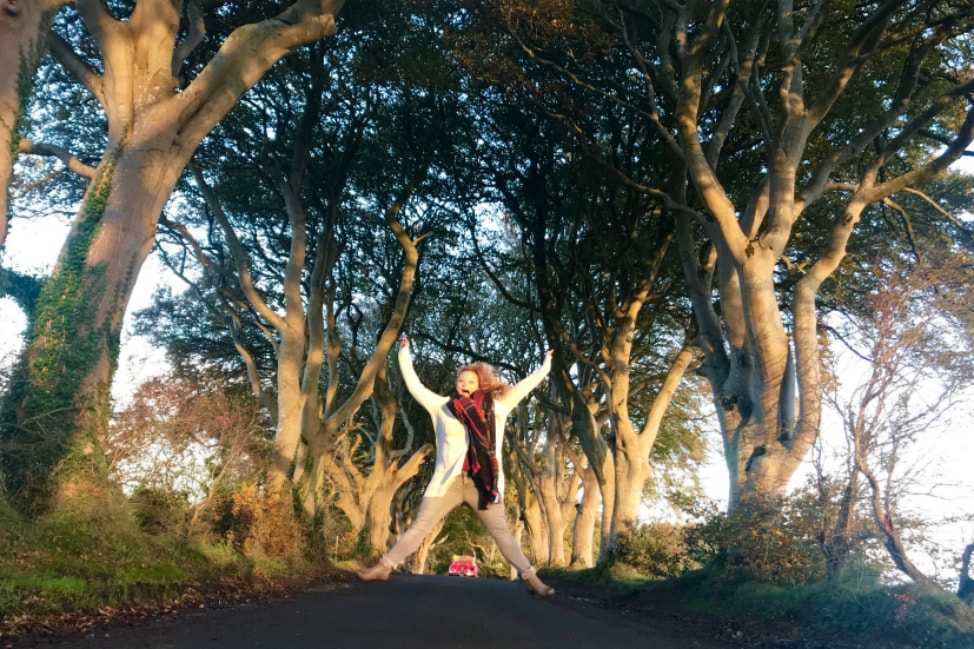 There are three major factors to consider when taking photos at the Dark Hedges. You can apply these tried and true photography tips to just about any situation, but light, crowd and angle are all particularly important here on Northern Ireland’s most photogenic road. Take note!

Photographing a country road with dark shade and bright sun is not an easy task, but with a little planning you can use both to your advantage. If you want the dreamiest light, plan for sunrise or sunset. 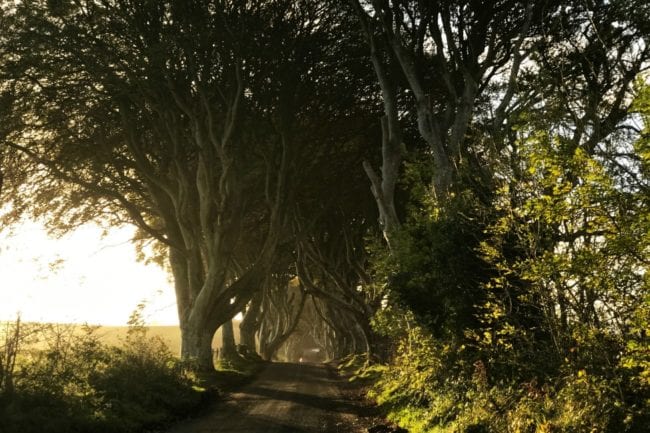 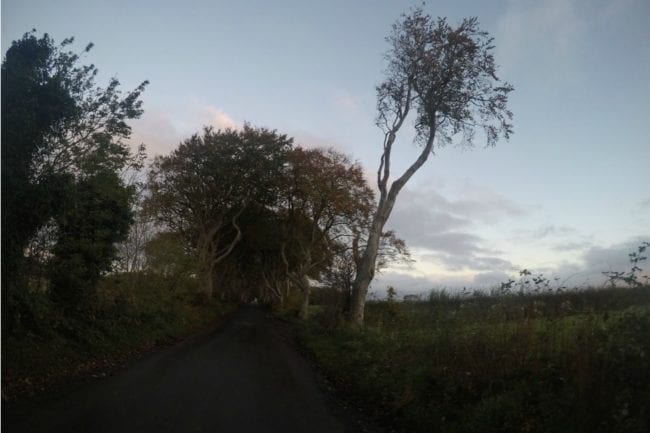 In October the sunrise was at about 8:09 a.m., so we didn’t have to wake too insanely early to catch the best light. High noon is going to contrast the brightest light with the darkest shadows, so you’ll likely have to do lots of post-production work to get a good final photo.

Not ideal, especially if you want to slap something up on Instagram quickly. 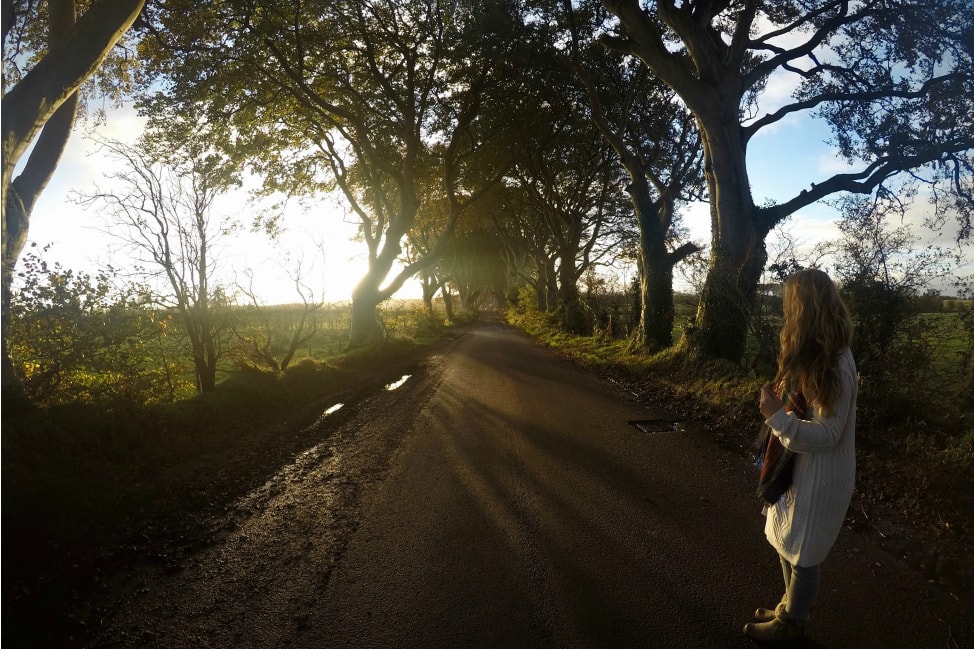 The soft, golden light of morning served us well, and changed rapidly as the sun rose higher in the sky. While some say the evening light is even more mystical, they also say a ghost called Grey Lady haunts the road at dusk.

I am not here for such shenanigans.

Beautiful sunrise light is only one reason to wake up early to see the Dark Hedges. Reason No. 2: it’s the best way to ensure you have the place to yourself. Tour buses arrive beginning around 10 a.m., so if you’re not on your own, you have a small window between the time the sun pops above the horizon and the moment the hoards stream in from Dublin and Belfast. 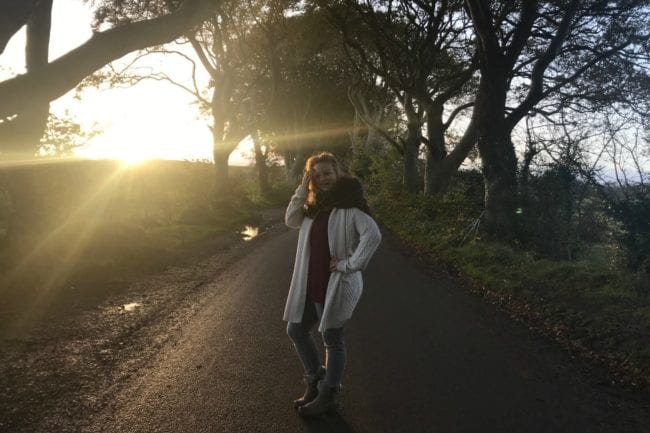 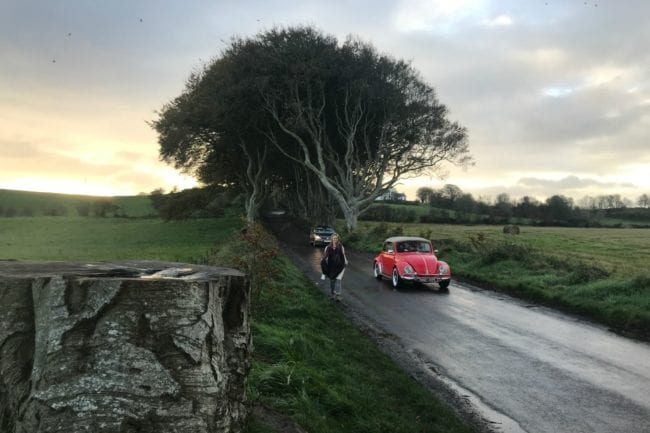 We were pretty lucky that the only others we had to contend with for real estate were a few local cars passing through, a couple other travelers and a gorgeous red Volkswagen Beetle. Thus, my most crowded photo isn’t crowded at all, really!

Want to see an example of the worst case scenario at the Dark Hedges? Click here and scroll down to see what this lovely spot looks like with hundreds of people on holiday.

As I mentioned, you can no longer drive through the Dark Hedges which means you need to think ahead and determine which side of the road you’d like to park on. Whatever is closest to your point of origin should be fine. You can always walk to the other side! 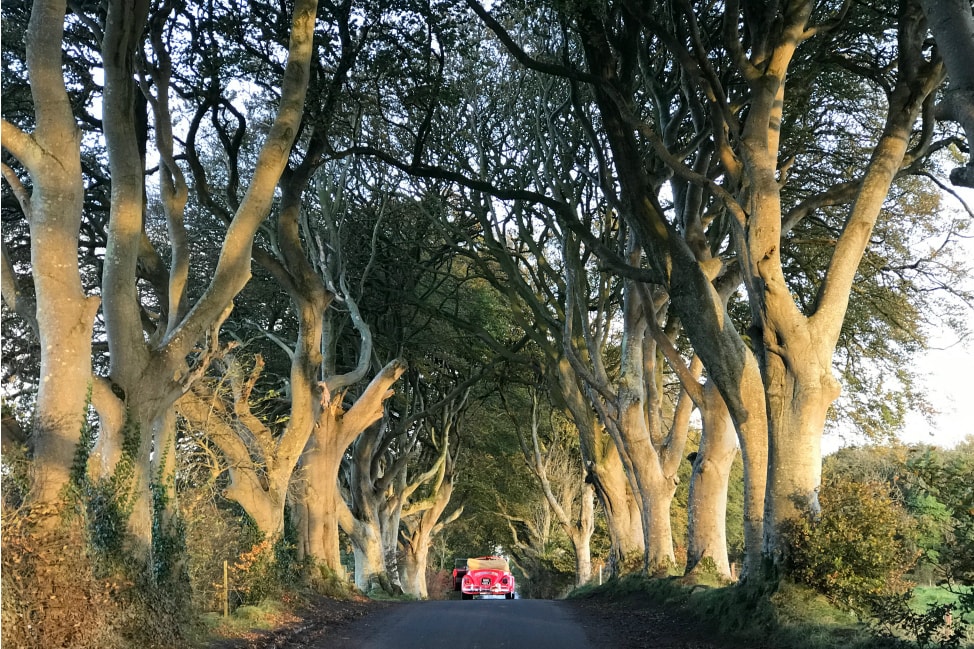 It may add a smidge of planning to your to-do list, but limiting traffic is a step in the right direction. The trees will be protected and cars will no longer mar your shots. Decide which side you’d like to start on (the southern side is most popular due to the small bend in the road) and Google Map your way there.

TIP: Don’t be a jerk. There’s nothing worse than an “influencer” standing in the darn road when you’re trying to get somewhere, right? So I tried to be conscientious of my level of annoyingness and keep out of the way of all the lovely Northern Irish folks actually trying to live their lives, get to work, etc.

Getting the right angle at the Dark Hedges is every bit as important as using the light, and this is another reason it pays to arrive early. Rick and I were there before the sun came up so we could scout the best spot to shoot. 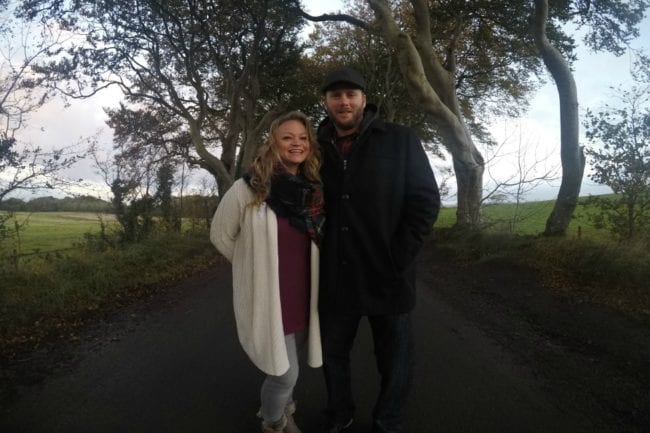 Depending on the type of shot you want – fashion, landscape, Jon Snow-costumed selfie – you’ll want to take some time to figure out how to frame your ideal look. Angles are one way to block out other folks who may wander into your shots. Even with a few people photographing along the road, you can pose yourself just right so it seems like you’re alone.

TIP: If you’re with your Instagram husband or a friend who perhaps doesn’t have the same vision that you do, have them stand in as a model while you get the light and angle right. Show them that photo and have them recreate it. You didn’t come all this way to get crappy photos, right? WORK IT. 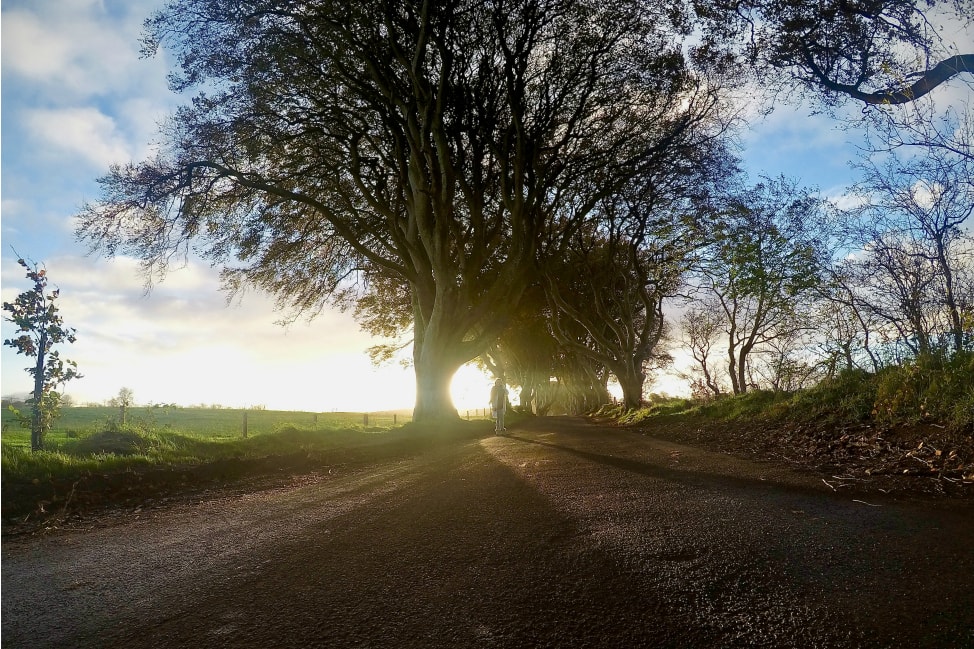 Standing there on the road, hugged by tangled and twined branches with soft sunshine filtering through the treetops, I was in my element. There’s no place like the Dark Hedges, so don’t miss it on your visit to Northern Ireland! 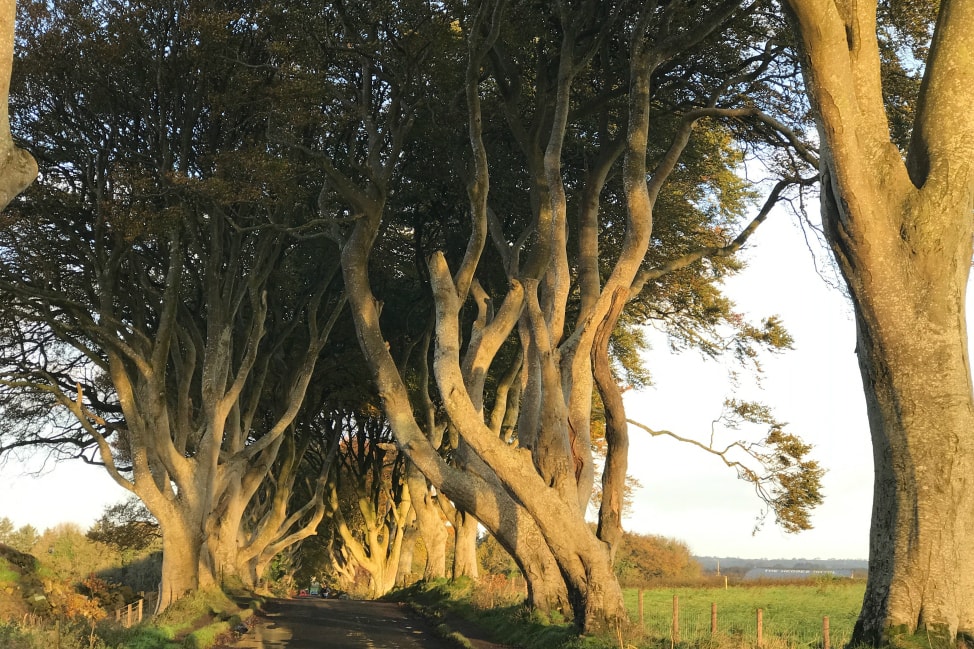 What You Need to Know to Visit the Dark Hedges

The closest place to stay is The Hedges, a small inn within a few steps of the northern entrance to the road. We stayed a bit further away at the lovely Bushmills Inn. Rick and I planned our road trip so we’d arrive at Bushmills in the evening and wake up early to explore the Dark Hedges, the Giant’s Causeway, Dunluce Castle and the Carrick-a-Rede rope bridge. (The first three were so spectacular, we never made it to the bridge!)

We loved road-tripping, but it was pretty stressful. Next time, we’ve got our sights on the following tours:

It was an easy 20-minute drive at about 7 a.m. past farms and fields. We popped over for a few hours of photo snapping and then returned for a traditional Irish breakfast and checkout. 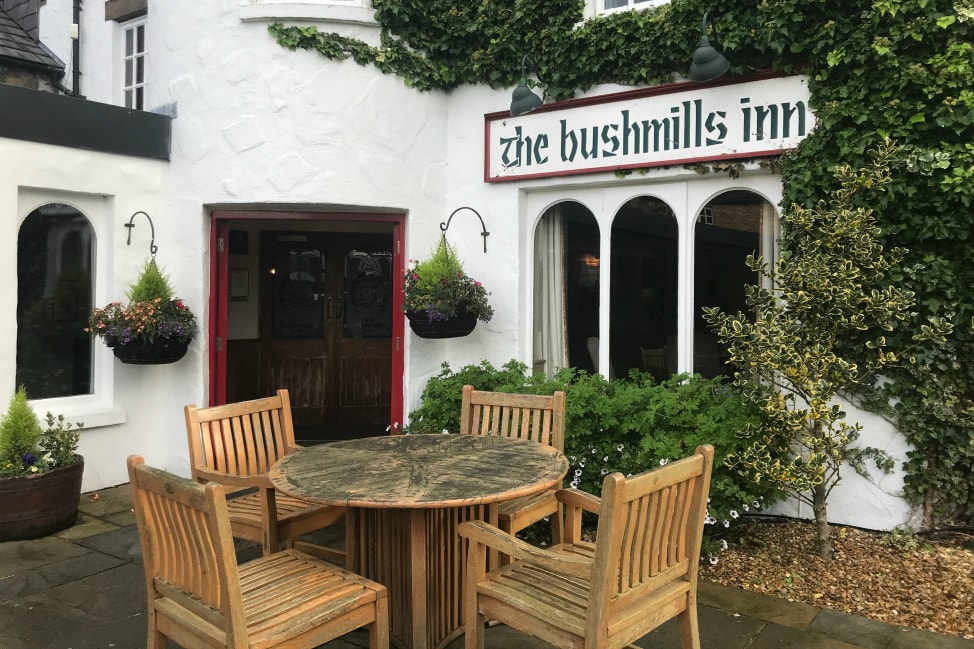 Plug in the “Dark Hedges” in GPS or Google Maps and you’ll find a pin on Bregagh Road near Ballymoney in Co. Antrim. The road is as rural as it gets, but by the time you reach your destination, you will have been driving on those narrow roads for a good while and you should be used to it. Address: Bregagh Road, Ballymoney, BT53 8TP | GPS/Sat Nav: BT53 8TT

Parking is free at the Dark Hedges, but it fills up fast. Even more so now that the road is closed to traffic, I suspect!

Have you been to the Dark Hedges? Any tips to add? 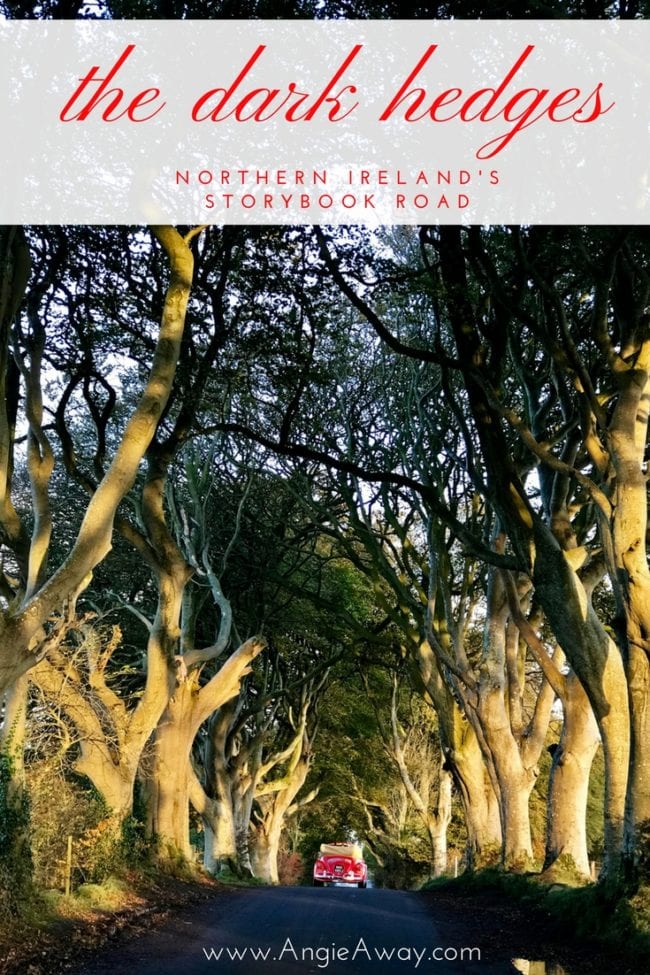 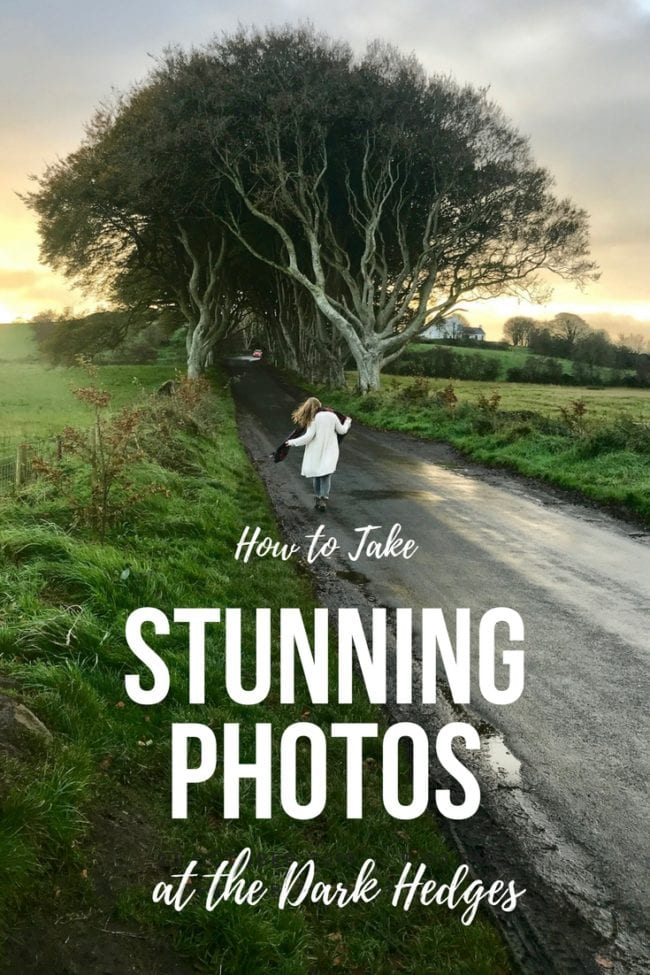 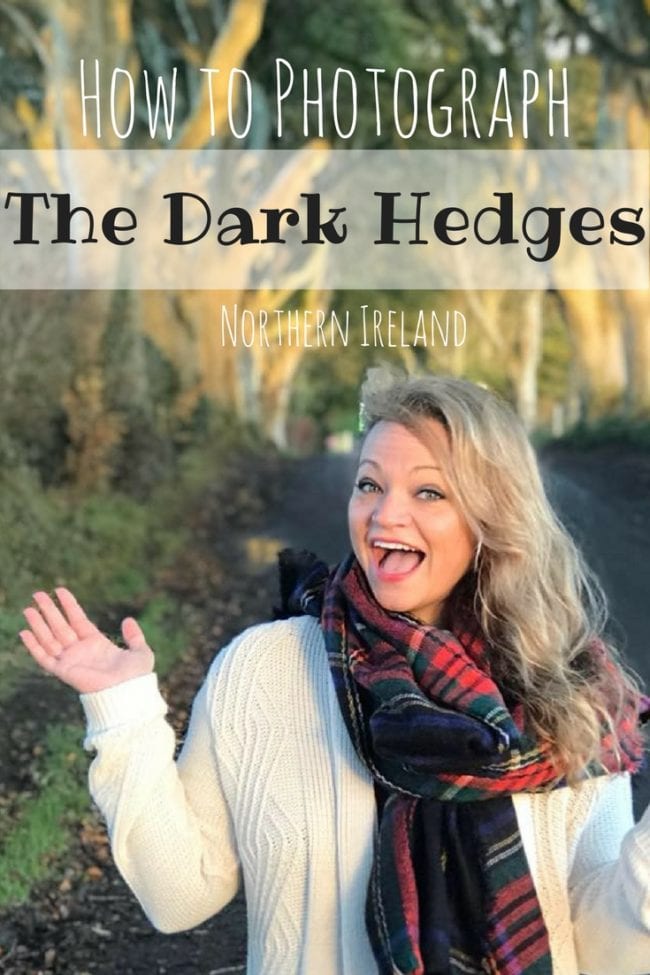