I’ve found that most folks are extremely talented in at least one arena. My brother is a melt-your-face-off drummer. My dad could give Billy Joel a run for his money on the piano. My sister is a natural artist. My mom can make a gourmet meal out of miscellaneous ingredients from the dark recesses of the cupboard.

Due to a remarkable inability to commit to excellence in any one sport or talent during my adolescence, I’m not brilliantly gifted at any one thing. I’m dreadfully average at many activities while never mastering one in particular.  Singing, swimming, tennis, ninja, flute, softball, cooking, sewing, painting, drawing, gymnastics, dance, cheerleading – maybe if I’d ever gone for anything longer than a season or a year I could have been proficient, but alas, I have a disappointing C average at just about everything I’ve ever tried.

I could be forlorn about having moderate talents and cry about how unfair it is to have such gloriously gifted relatives… but I have no choice but to take pride (even if misguided) in my situation. Yay for being just ok at several things! I’ve adopted this attitude out of self-preservation, because in addition to being ok at a lot of things, I am factually and humiliatingly terrible at one of the most basic human activities.

My whole family can do it, probably blindfolded. Toddlers learn it early in life, making it one of those second-nature things like using the potty or covering one’s mouth when coughing. Monkeys have even been known to do it. (Albeit, they’re circus monkeys, so they’ve probably had a lot more training than I ever did.)

What is it? It’s not break dancing. (Though come to think of it, I am probably not good at that either.) It’s riding a bicycle. RIDING A BICYCLE! (Feel free to shout your indignation right at the computer screen!) Competent cycling is so universally achievable, there are even phrases about it. “Oh it’s so easy, it’s like riding a bike!” I can’t relate!

It’s not the actual riding that’s so hard, because technically, I can ride. It’s just that if there’s anything else on the street, I lose my mind and either bail, sending my riderless bicycle careening into the obstacle, or I hold on tight and drive head-on into immobile objects. Just ask every mailbox on my grandparents’ street.

I know, it’s so shameful. You may scoff at me now. 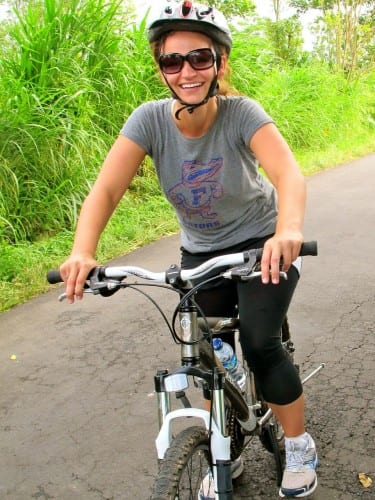 Ok, scoffing time is over. Now, the reason I told you this long-winded, shameful tale in the first place. After volcano yoga with my ONEWORLD compatriots, it was time to ride bicycles en masse, past villagers and through luminescent green rice fields. When I confessed my lack of biking ability to my yoga retreat friends, they brushed it off – and who wouldn’t? What person past the age of 7 can’t ride a bike with confidence? (There are kids in diapers driving motorcycles here, so my shame is even greater in Asia.)

I told my friends while putting on my helmet, “As long as we’re on a flat surface with absolutely no cars, motorbikes, children, hills, mailboxes, distractions or cliffs, I will probably be ok.” More shrugging from the friends. Ok, fine, I thought, psyching myself up. I can totally do this, because I’m 29 ever-loving years old. And every adult in the world can ride a bike without falling off or running into something. Come on, Ange. This is your “dare to be great” situation! 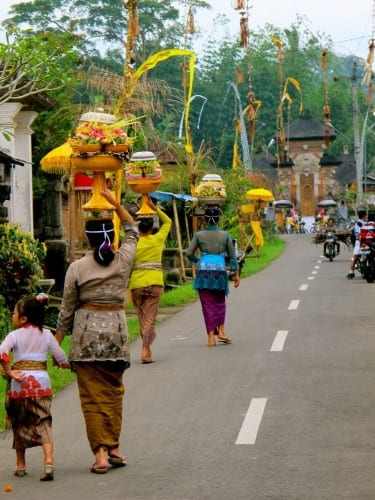 Villagers on the way to the temple

Five miles into the ride, I felt like Lance flipping Armstrong. Yes, I was white knuckled, gripping the brakes on the downhill ride, and my non-accustomed bum hurt a bit from the contours of the seat, but the Bali breeze was blowing in the coconut palms, the sun was shining hot on my face and I was taking the best pictures of the trip. 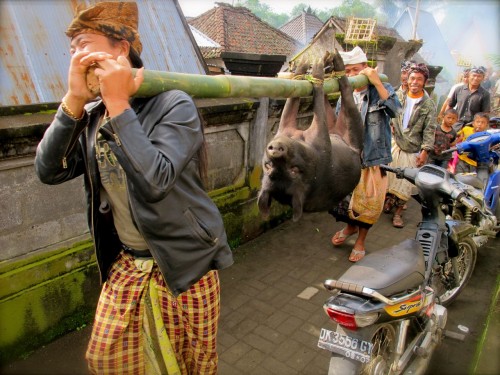 Hey y’all! We’re having a barbecue! Come on over!

With my shiny new Canon G12 hanging around my neck, I felt like such a travel conquistador. Yes! I CAN ride a bike! I am amazing. This is my new thing. Bike riding is so my new thing. I own this ride. 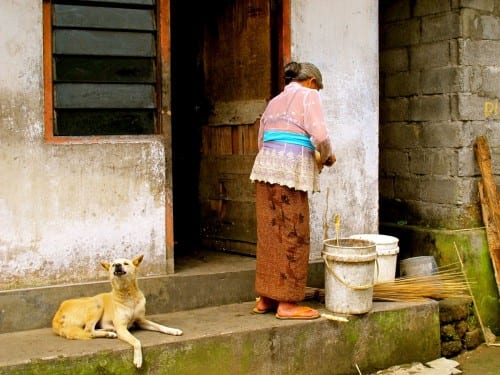 This puppy was not fond of intrusive, bike riding journalists

Feeling confident enough to loosen the death grip on the handlebars, I looked down to flick my camera to video mode in order to capture some moving footage for my recap video. Multitasking evidently has no place in bike riding. When I looked up, a frightening and unanticipated confluence of chicken, child, dog and motorbike appeared in my field of vision. Mailboxes flashed in my mind – it was all happening again! I overcorrected left, right, left, and careened across the rocky dirt road where half of me jumped off the bike and the other half held on. 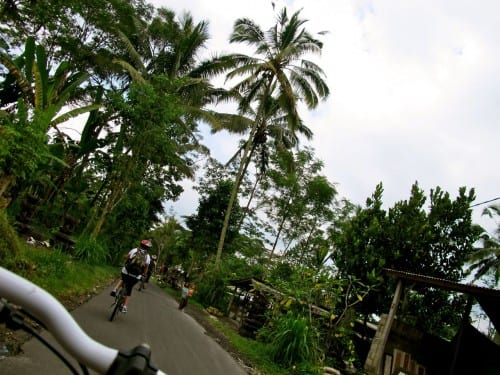 I managed to slam the front left side of my rib cage and thigh into the bike before somehow turning over and doing the same to my bum and hip. There was some rolling about, some end-over-end tossing… it was quite violent, for a one person bicycle crash.

That’s it! I bellowed from my mangled position atop the bike. I AM NEVER RIDING A BIKE AGAIN!

Assessing my injuries, I determined I was definitely going to die of bruises and humiliation, so I extracted myself off the crashed piece of metal and stormed (read: limped with a purpose) into the waiting van that ONEWORLD staff had been driving behind our group. Luckily, only one of my yoga pals witnessed my demise, and she confessed later that the fateful combination of village dog, kid, chicken and whatnot prevented her from stopping to help me. “It was too scary!” she said. Tell me about it!

Back in the loser van, ONEWORLD’s Wayan was freaking out over my injuries, trying to poke me to see if I was broken. I assured him that though I would be bruised and possibly scarred for life from the trauma, I didn’t have any broken bones.

Sadly, there was at least one fatality from the crash – my brand new Canon G12. (I don’t think the bike fared too well, and no word from authorities on if any village chickens were injured.) The lens of my prized Christmas present from my mom had been extended when I slammed it into the ground with my chest, warping the circle outside the lens and preventing it from either retracting or taking additional photos. RIP. 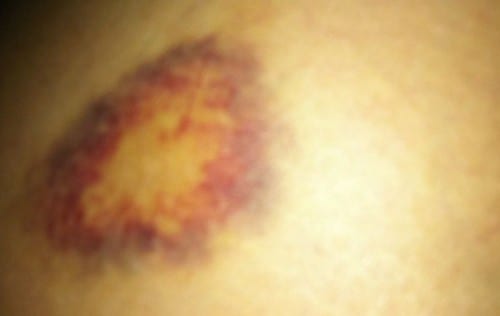 Just one of my souvenirs from Bali. Trust me, there were 10 more just like it.

Defeated, I spent the rest of my day icing my ribs, hip and thigh, and rueing the day Benjamin Franklin (or whoever) invented the bicycle!

If you liked this post, please tell a friend. xx