This post was created in partnership with Hotel Indigo. I was compensated for my time; as always, opinions and insights on accommodations, Savannah activities and fried green tomato variations are my own. Thank you for supporting the brands that make Angie Away possible!

I know what you’re thinking. “Didn’t you just go to Savannah in October, Angie Away?” Why, yes, I did. You’ve been paying attention!

It was that brief 24-hour jaunt to celebrate our 1st wedding anniversary that set my wheels spinning. Why don’t I visit more often? I go to Orlando, what, twice a month? And that’s the same distance from home as Savannah, yet I’ve only been a few times.

As luck would have it, Hotel Indigo reached out right about the time I discovered Savannah with new eyes about getting to know the city a little better. Who could turn down another taste of fresh biscuits and fried green tomatoes? Not this gal. 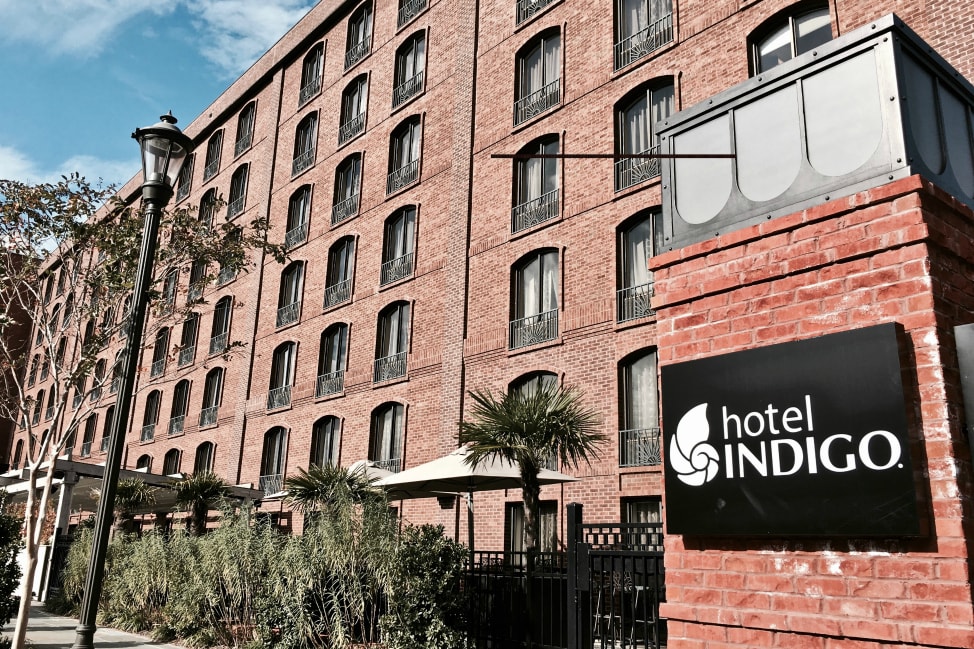 Not familiar with Savannah? Despite growing up just a few hours away in Jacksonville, I really didn’t know much about the Hostess City of the South until recently. It’s one of those places that’s so close to home I just sort of overlooked it. No more!

A few fun facts I learned on my last trip:

Savannah appeals to my current roots and wings lifestyle. There’s the old side: traditional, conservative, storied, classic, preserved. Then there’s the modern twist: artists are everywhere and the new meshes with the historic in a respectful, creative way. I love that I can drive up I-95 and in just two hours, find myself amid Spanish-moss draped oaks and a variety of architectural styles, historic squares, towering statues and nice people who make eye contact, hold the door and say “y’all.”

Plus, amid all that history, there’s Southern food and lots of it. 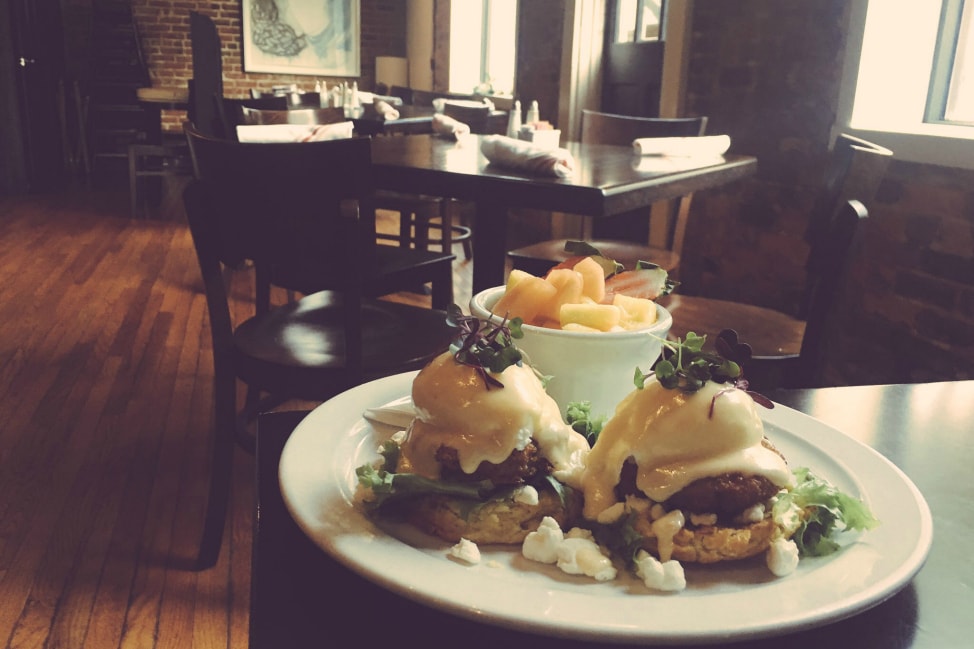 When Hotel Indigo invited me to explore Savannah, it was no tough sell, and not just because I was already falling in love with the city. Way back in my past life as a NYC publicist, the fledgling Hotel Indigo brand was one of my clients. Keeping that in mind, you won’t be surprised that I’ve chosen to stay at several Hotel Indigo properties while jaunting around the world. It’s a brand I know I can trust for clean, safe, consistent accommodations, no matter where I go.

So yes, Hotel Indigo is an established brand, but it isn’t the same hotel in 60+ locations. Each property feels like a one-off boutique with its own look, feel, scents, food and ambiance. No two are alike, so while it’s always a consistent service experience, each property reflects its neighborhood in a unique way. 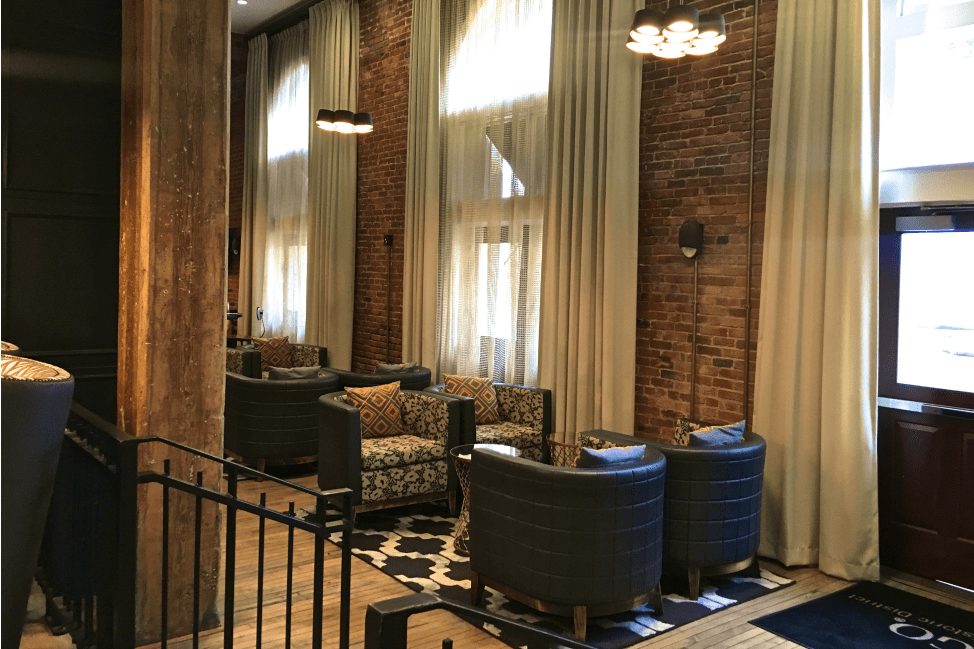 Hotel Indigo Savannah Historic District might be one of the most recent additions to the portfolio, but the building itself isn’t new to historic Bay Street. Once a dry goods storage warehouse and shop in the mid-1800s, it was the place to go to pick up cotton, grain, tobacco, stamps and indigo. Isn’t that cool?

Known as the “Grand Lady on the Bay,” the 252-room Savannah property features original wood beams and bricks interspersed with local artwork by SCAD professor Meryl Truett and subtle design nods to its historic past. For example, the wallpaper in the bathrooms is actually a grid of the city. Isn’t that clever?

If you’re into distinctive and thoughtful design touches that tell a story, Hotel Indigo is right up your alley.

Aside from the thoughtful design, I love how Hotel Indigo is committed to making the neighborhood as much a part of a stay as the hotel. The staff is well-versed in recommendations for restaurants, bars, outdoor activities, museums and where to catch live music, so for my visit in Savannah, they whipped up an amazing list of things to do see, eat and drink. 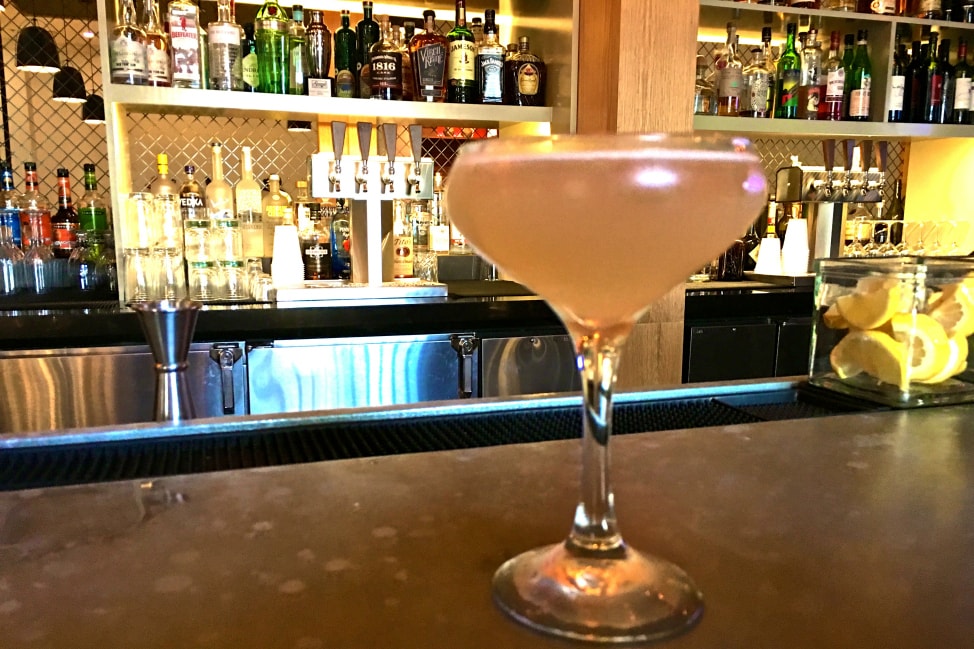 MUST TRY: The Fassbender at Five Oaks Taproom

Where to Eat & Drink in Savannah

― John Berendt, Midnight in the Garden of Good and Evil: A Savannah Story

First stop, Five Oaks Taproom! Hotel Indigo is home to one of the hottest little craft cocktail bars in Savannah. Their award-winning mixologist Jason Graham concocts unique drinks with locally sourced ingredients all while sharing his take on Savannah’s craft cocktail scene. His signature beverage & recent People’s Choice winner at the Savannah Food & Wine Festival? The Fassbender. Take one look at Jason and you’ll get it.

There’s food to try as well, and much of it is sourced from within 90 miles from the hotel, including grits from Cane Water Farm in Darien and meat from Hunter Cattle in Statesboro.

After a starter cocktail or Georgia brewed beer with Jason, the world is your oyster… or crawfish or biscuit, depending on where you go next. From the Hotel Indigo lobby, you’re within 1 block of City Market, Ellis Square and the cobblestones of River Street, and three blocks or less to the Telfair Museum, Jepson Center and Broughton Street shopping. 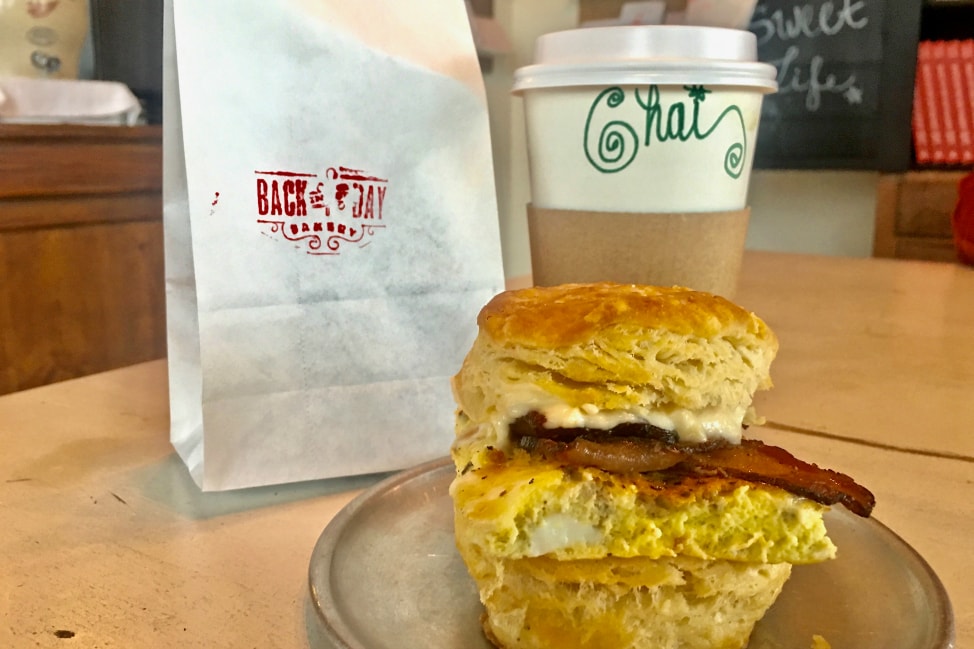 Back in the Day Bakery. A $5 Uber/Lyft from Downton and worth the trip to eat at this James Beard Award nominated cafe. Get the bacon, egg and peach chèvre biscuit & chai latte and spend some time reading the paper and enjoying a slow Southern morning.

B. Matthews Eatery. Fresh, seasonal and local ingredients where possible. Absolutely divine eggs Benedict with goat cheese and fried green tomatoes. (One of my favorite Benedicts ever, and I test them everywhere I go.)

Vic’s on the River. During the Civil War, Gen. Sherman’s officers used this space as housing and meeting space. In the main dining room, there’s actually a hand-drawn map detailing Sherman’s fiery march through Georgia. Try the award-winning crawfish beignets!

Flying Monk. In the unlikely event you tire of Southern food (blasphemy!), noodle dishes from the Flying Monk will help.

Local 11 Ten. The best pork belly I’ve ever had! Check out “The Perch” to admire the views south of Forsyth Park.

Jazz’d Tapas Bar. Something for everyone, including live music. Small plates but more American appetizer-size than traditional Spanish tapas. Rick and I ate here in this hip basement restaurant for our anniversary and were not disappointed. Goat cheese & chorizo sliders FTW! 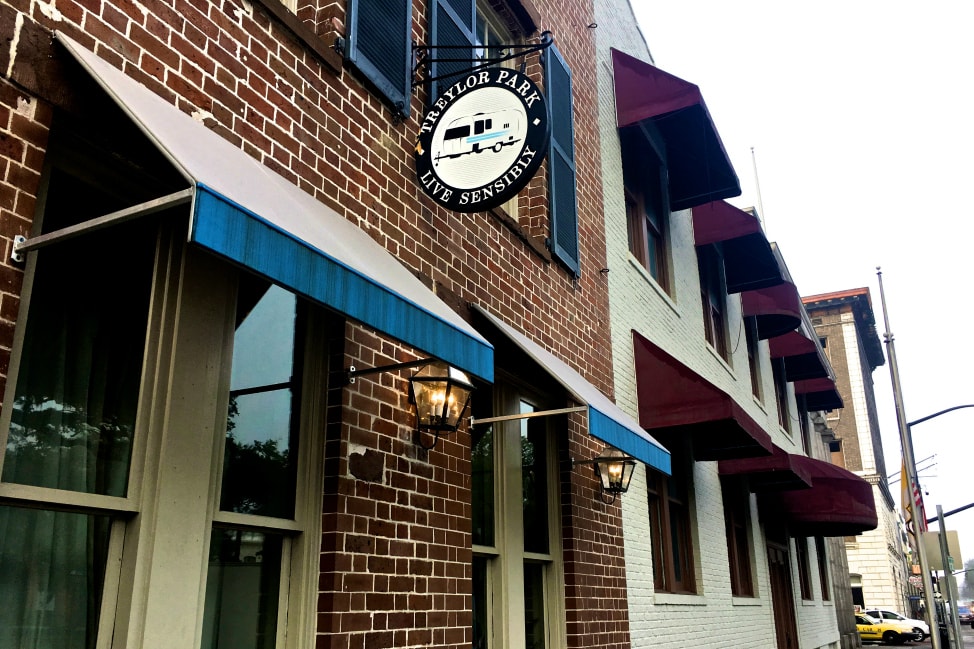 It seems like it’s always happy hour in Savannah and there are more than enough bars to satisfy every type of traveler. Here are some recommendations!

The funny thing about Savannah… every time you order a cocktail, the bartender asks if you want it to go! So it’s perfect if you want to take one for the road so you can wander the historic squares on foot, ice cold bev in hand. (For more about where to drink in Savannah, check out my latest for the Travelocity Inspire blog!)

The saving grace about Downtown Savannah’s hearty culinary scene? The town is compact enough to explore by foot, so you can walk off the fried green tomatoes, fresh biscuits with whipped butter and mimosas by the time you get back to the hotel. 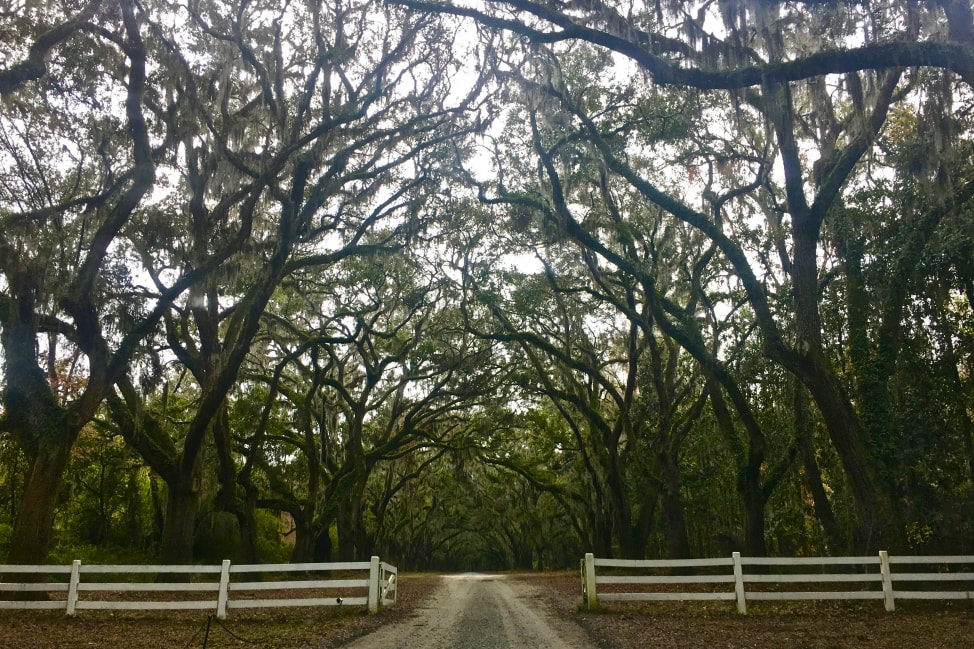 Things to Do in Savannah

When you’re not eating delectable Southern dishes or drinking clever craft beverages, there’s plenty to keep you busy! Here are some of my favorite things to do. 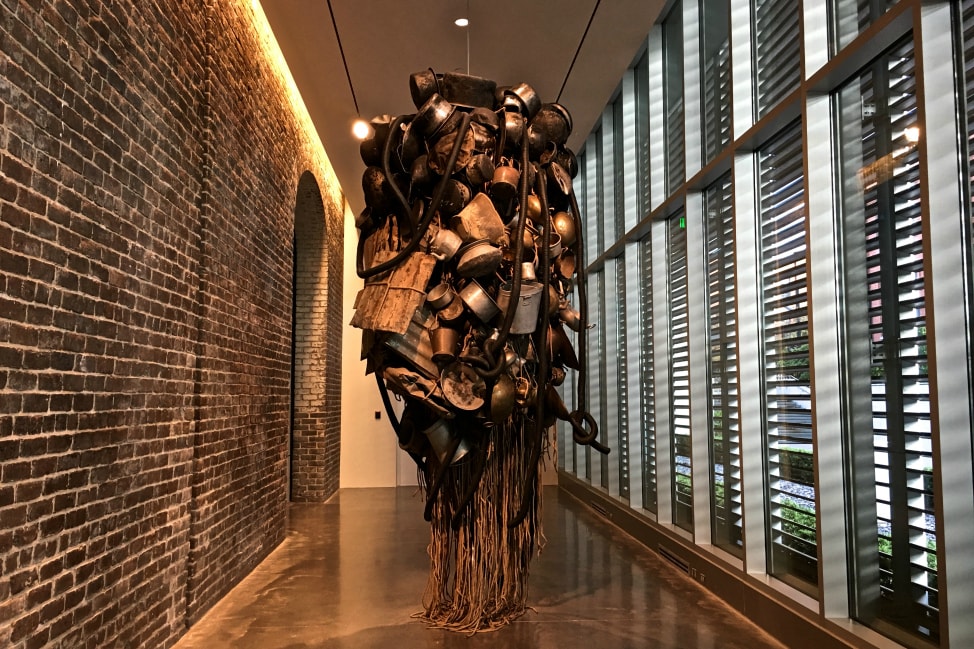 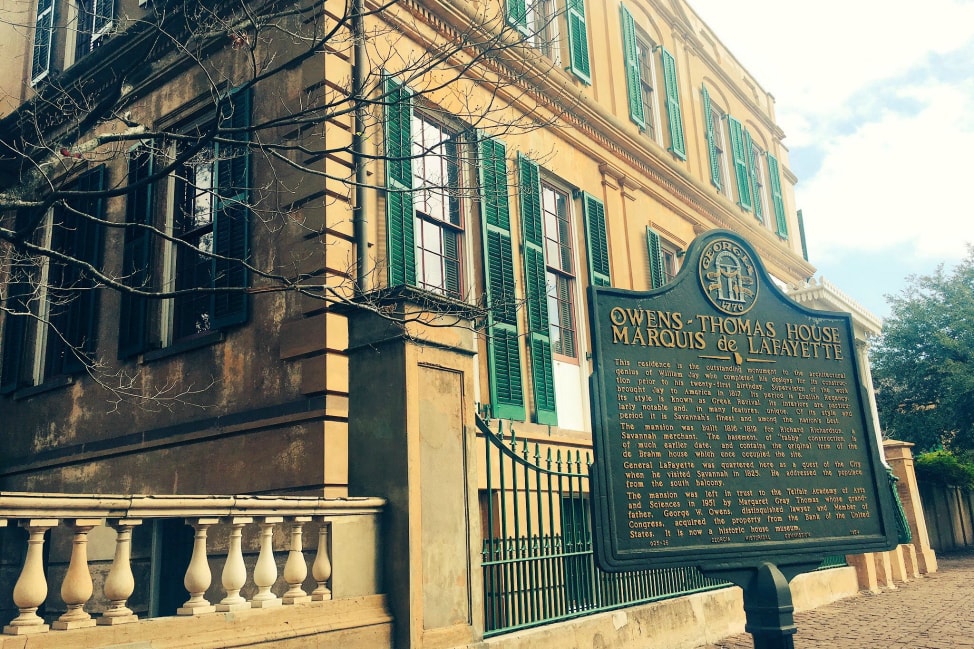 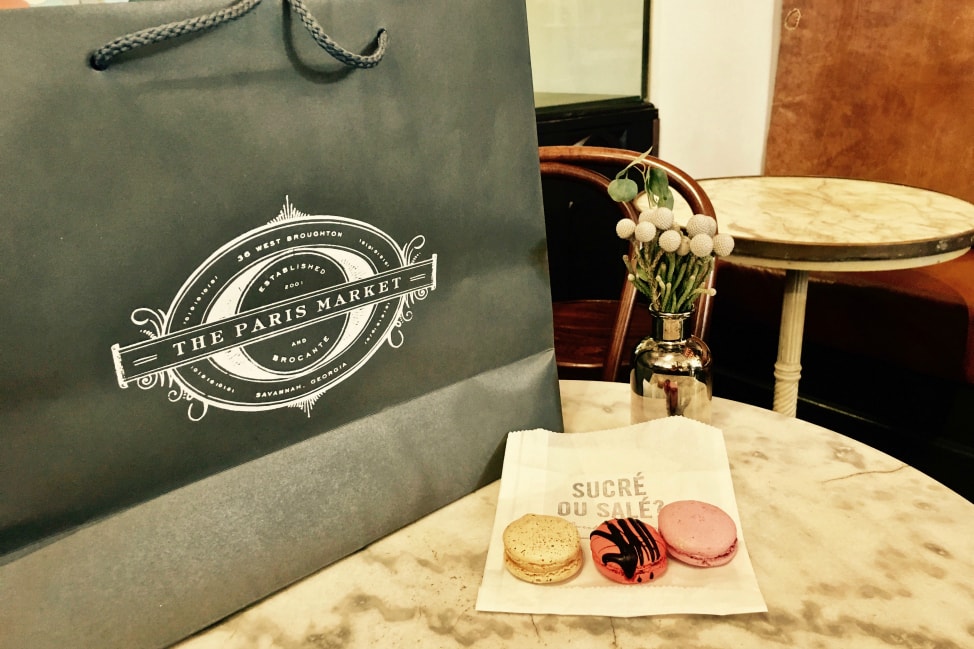 TIP: Street parking can be a bear, especially if you were absent the day they taught parallel parking in Driver’s Ed, so it helps to park/valet at your hotel and walk or Uber everywhere.

The days of Savannah as an afterthought are behind me, y’all. Between my quick visit with Rick in October and my adventure with Hotel Indigo last week, it’s safe to say Savannah is going to be on my radar quite a bit in the future.