Not much went right during our wedding in The Bahamas, but I’m happy to say the honeymoon was lovely and without any Lifetime movie-worthy drama. We had our hearts set on St. Lucia or the British Virgin Islands, but the flights from (MHH) Marsh Harbour, Bahamas, to those further Caribbean airports would’ve dragged us through Miami airport for a couple of extra days… and I’m pretty sure no marriage should start out in the chaos of MIA.

We ended up choosing a foolproof mega-resort on Exuma, another Bahamian island. Though it’s not typically our style to hole up at an all-inclusive, it ended up being a really good, albeit expensive, decision.

During our 6 nights, we rested as much as we could though I was surprised at how hard it is to just flip off the wedding stress switch. Considering I’d been the most overwhelmed I’d ever been in my entire life, it was challenging to let it all go and just be carefree and mentally stable. Even after a couple of days sitting around the pool, we grew restless – we just aren’t the types to let grass grow under our feet, ya know? – so we escaped the grounds and went out with Four C’s Adventures, one of the island’s most trusted tour operators. 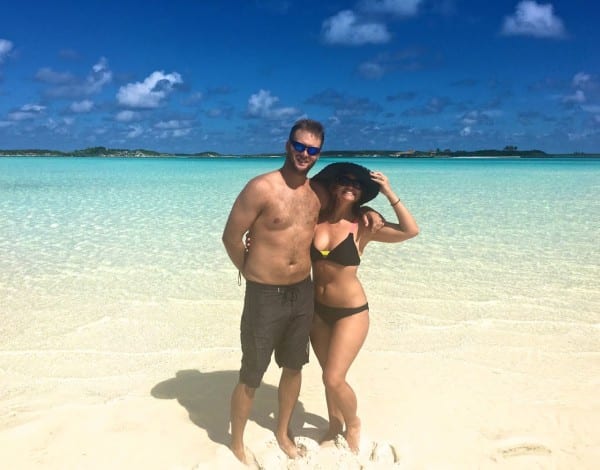 Trusted outside the all-inclusive resort world, that is. You won’t hear about Four C’s if you’re staying at the biggest hotel on the island, because they offer their own internal tours. Our butler, who was wonderful in all respects and acquiesced to our every whim, was not allowed to call Four C’s to confirm our excursion. I share this so if you are staying at an all inclusive on Exuma, you’ll know that it’s absolutely ok (and recommended!) to go off property for tours – especially if you want to see the REAL swimming pigs of Exuma.

The mega-resort tour takes guests to see pigs, but I did some digging and found out that they aren’t ones that are now the focus of the Travel & Leisure ad campaign. Booking a day trip with Captain Pat and Four C’s is the best way to make sure you see the real famous pigs of Big Major Cay – not imitation pork! 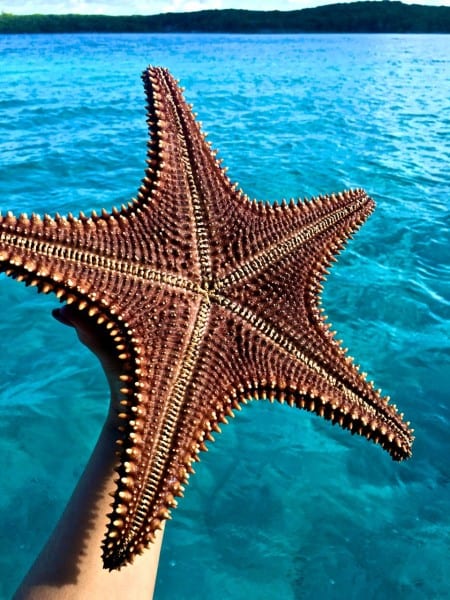 The full-day trip with Four C’s Adventures is the ideal way to experience a large swath of the Exuma Cays, an archipelago of 365 stunning islands covering 130 turquoise miles. The day’s itinerary will vary based on weather and tides, but on this high-speed water safari, you’ll likely walk on a 2-mile long sandbar, snorkel in world famous Thunderball Grotto near Staniel Cay, view a sunken drug plane, feed endangered Bahamian Rock iguanas on Leaf Cay, find starfish as big as your head, feed the REAL swimming pigs and snorkel with pet nurse sharks and schools of bonefish.

Only in Exuma does a real life wild animal safari get you close enough to feed & touch many of the creatures! At $160 per person for the 9 a.m.-5 p.m. tour, it’s a great value.

My Top 5 Highlights from the Four C’s Adventure Tour 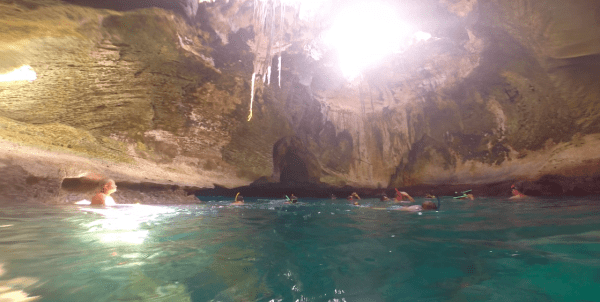 It looks like a hunk of limestone, but inside this unassuming island is a hollowed out cavern, perfect for snorkeling – and espionage? In the 60s, James Bond Thunderball was filmed here, and that’s where the grotto gets its name. 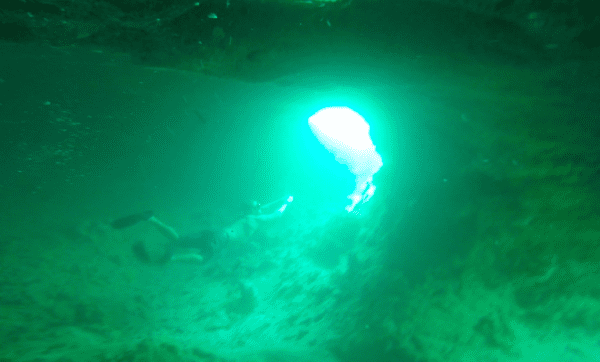 There were a few dozen folks on our tour, so I recommend being the first person off the boat and in the grotto if you want to have a moment of peace and quiet inside. Otherwise, plan to share it with all your new boat friends!

You never know if the pigs will make an appearance – they are wild animals with a mind of their own, after all, but as their popularity has grown over the years, so has their fan base. Boats motor up to the beach and the piggies swim right out to meet the adoring crowds. 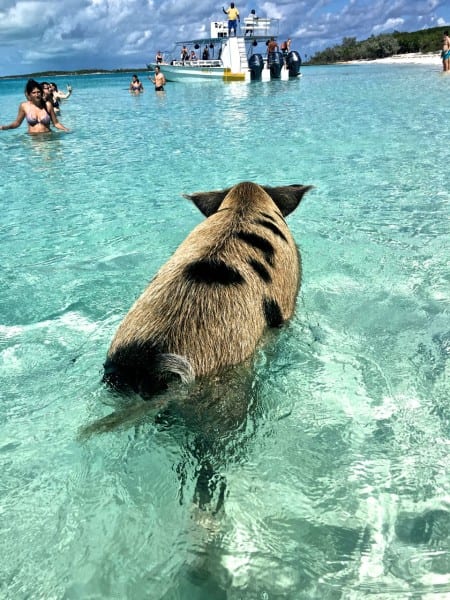 Don’t show up without food though – that’s just the height of rudeness. Though to be honest, these guys have really chunked up since the last time I visited. It doesn’t seem like too many people forget to bring snacks. 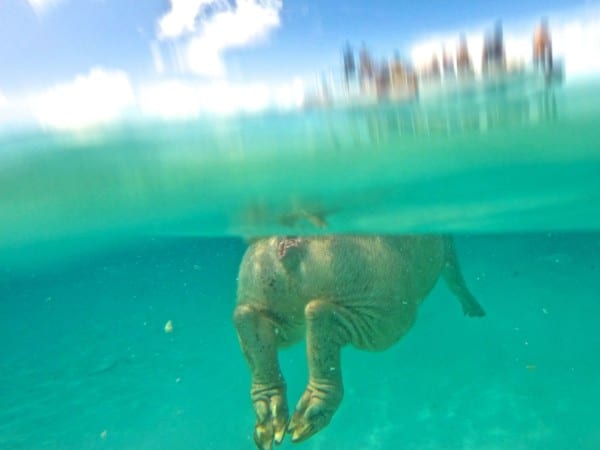 3. The Friendly Sharks of Compass Cay 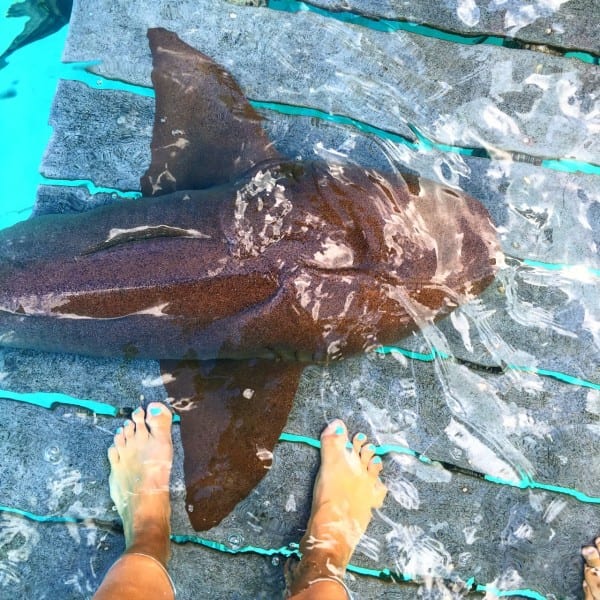 It’ll cost you $10 to disembark from your Four C’s vessel at Compass Cay Marina, but it’s worth it to snorkel with a few dozen docile nurse sharks and hundreds of other fish. 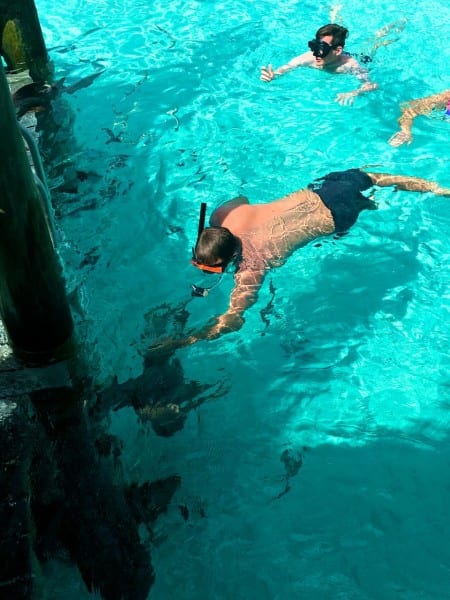 It’s one of the most memorable moments of the safari, so don’t wimp out because of a fear of sharks. There literally couldn’t be nicer, more domesticated creatures in the sea! 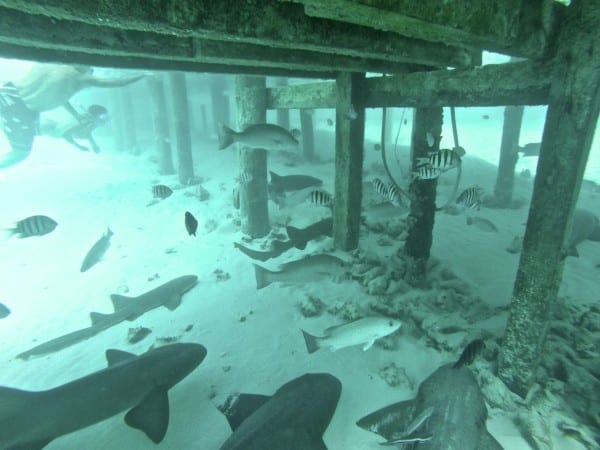 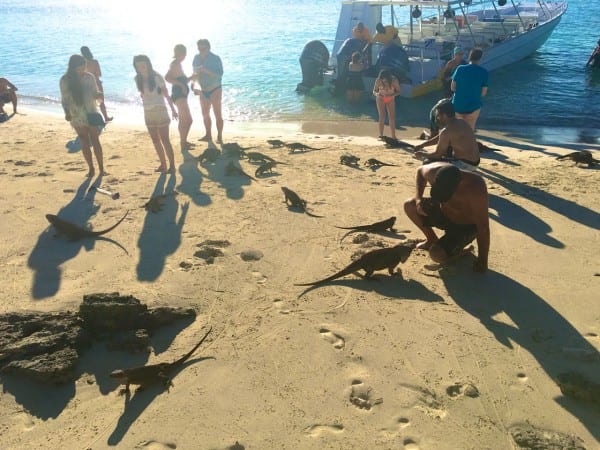 Leaf Cay was once owned by Nicolas Cage, but now it’s just home to heaps of endangered Caribbean Rock Iguanas. 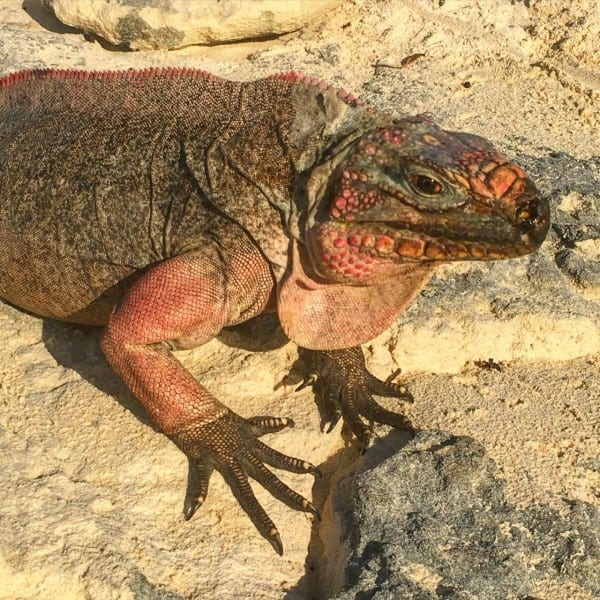 Like all the critters you’ll encounter on safari with Four C’s, the rock iguanas are surprisingly friendly. They’ll just march right up and wait for you to share some grapes.

Faith Hill & Tim McGraw, David Copperfield and heaps of fancy CEOs and European business magnates have purchased islands in the Exuma Cays, and Four C’s captains make sure you get as close as you can to their fancy vacation homes without being too nosy.

Once you zip by their private beaches and enormous bungalows, you’ll be formulating a plan to sell all your worldly assets to buy a rock of your own after your Four C’s safari – it’s just that breathtaking. 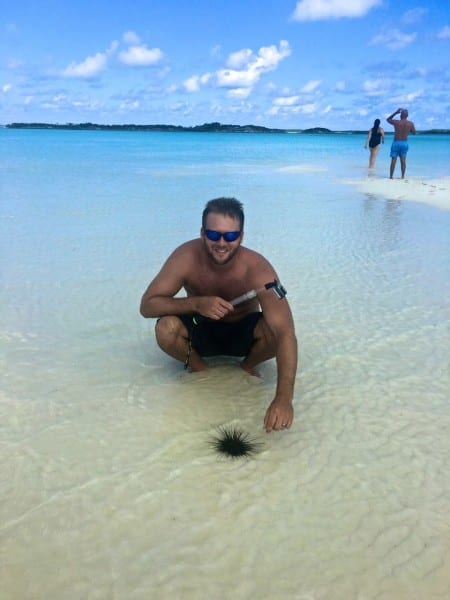 Tips for Exploring Exuma with 4C’s