Exuma was not affected by Hurricane Dorian, however neighboring islands need your help! Check out this list of trusted organizations and help out our Bahamian neighbors in Abaco and Grand Bahama Island.

When I first visited the unassuming swimming pigs of Exuma in 2007, they were hardly the paparazzi-magnets they are now. Back then, a few small boats might motor up to shore each day in the hopes of catching the water-loving piglets on the beach. In the ensuing years, their popularity has skyrocketed and the pig population has grown, too.*

Now that the local swine are the subject of The Bahamas’ ad campaign, the swimming pigs of Exuma have become a curious must-see attraction for visitors. 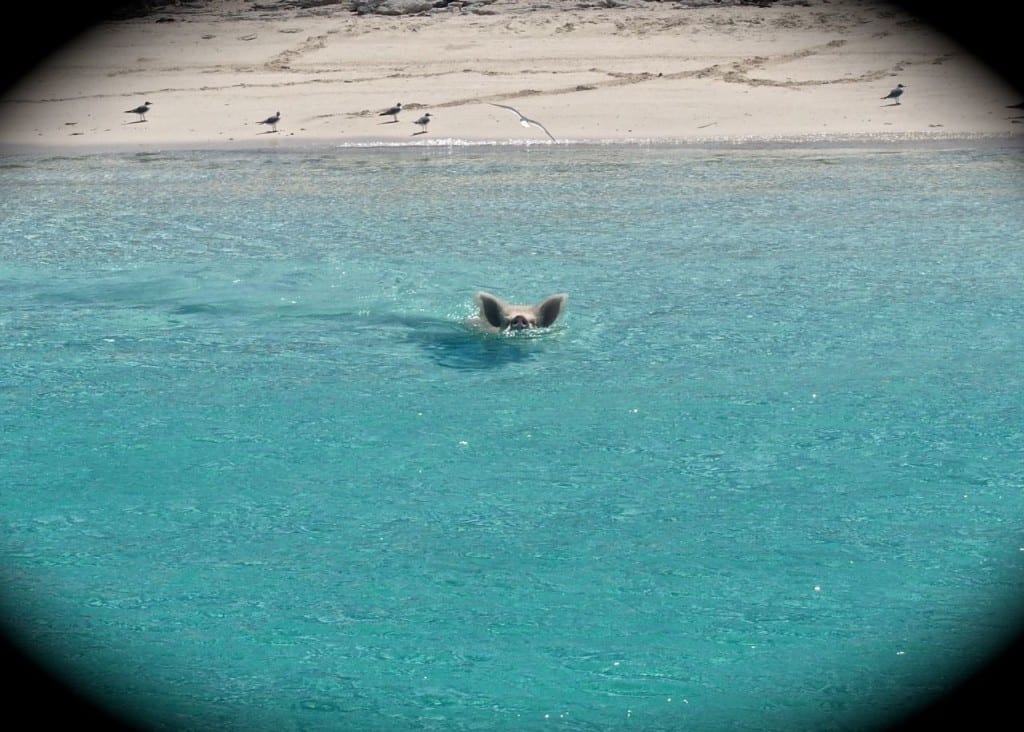 If the summer-loving sows have swum their amphibious way onto your travel bucket list, here are a few tips for a productive, safe visit to piggy paradise. 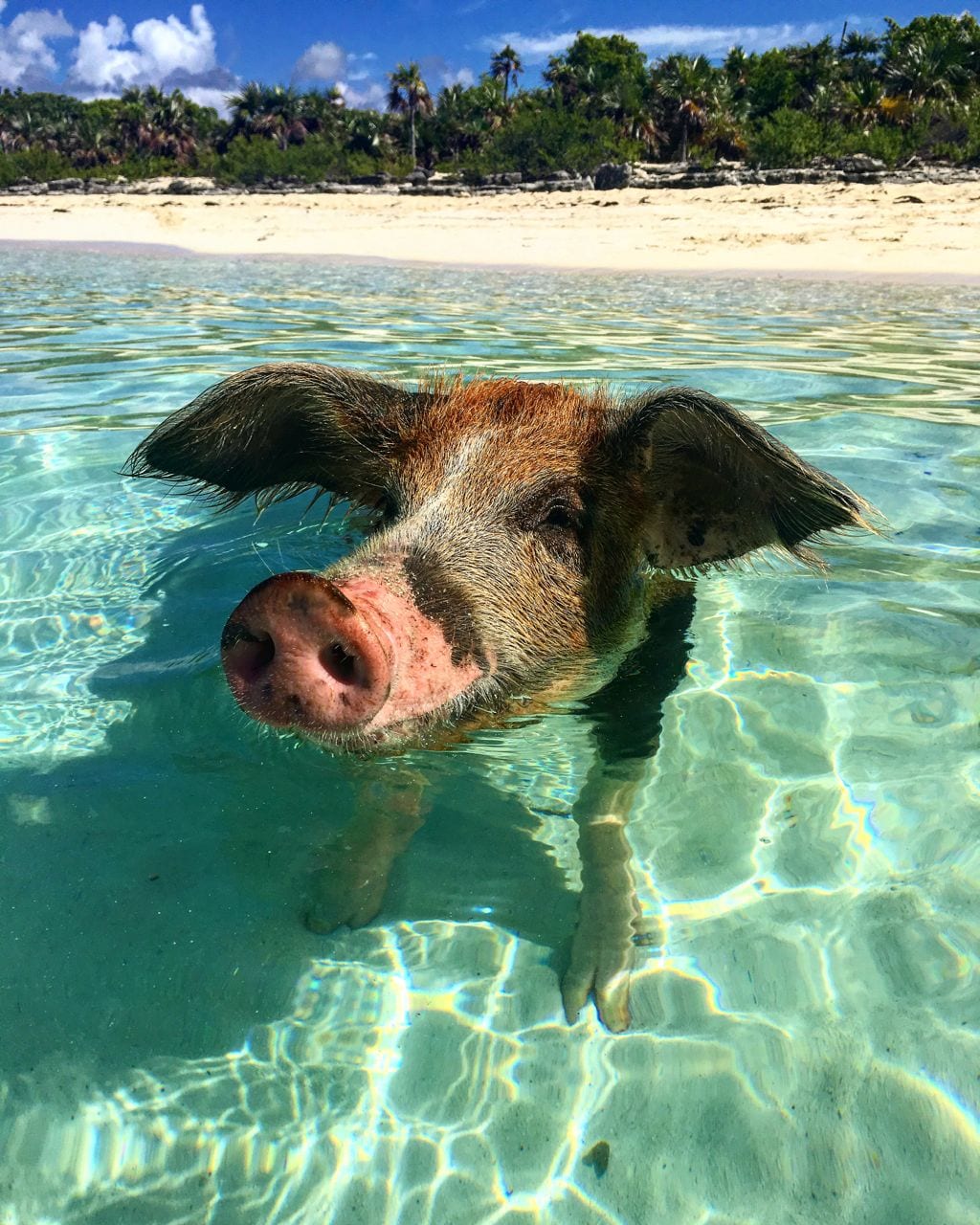 1. If you’re trying to figure out where to stay in the Bahamas, you have three options.

If you want to stay near Big Major Cay where the pigs live, your best option is itty-bitty Staniel Cay. It offers a sizable marina, several small hotels (EMBRACE Resort is my favorite), and an airstrip.

From there, you can rent a small boat or hire a local guide to whisk you over to Pig Beach. From Staniel Cay Yacht Club, it’s only about 10 minutes to the pigs.

(check here to book and here for my full review)

You can also check here for Airbnb options.

If you’re staying on mainland Exuma, which most people do, your best bet is to hop on an organized tour of the cays that includes a visit to Big Major Cay.

I recommend 4C’s Adventures because you also get to check out the friendly sharks of Compass Cay, the endangered pink Rock Iguanas on Leaf Cay. and a gorgeous sandbar that goes on for miles. There ain’t no safari like an Exuma Cays safari, I always say.

You can also stay in Nassau, which is incredibly easy to get to from hub airports and book a powerboat tour of the northern Exuma Cays including Big Major. Most tours you find online leave from Nassau.

It’s a long day, but absolutely magnificently gorgeous. You’ll never see the sea the same way after you’ve been on a tour of the Exuma Cays. 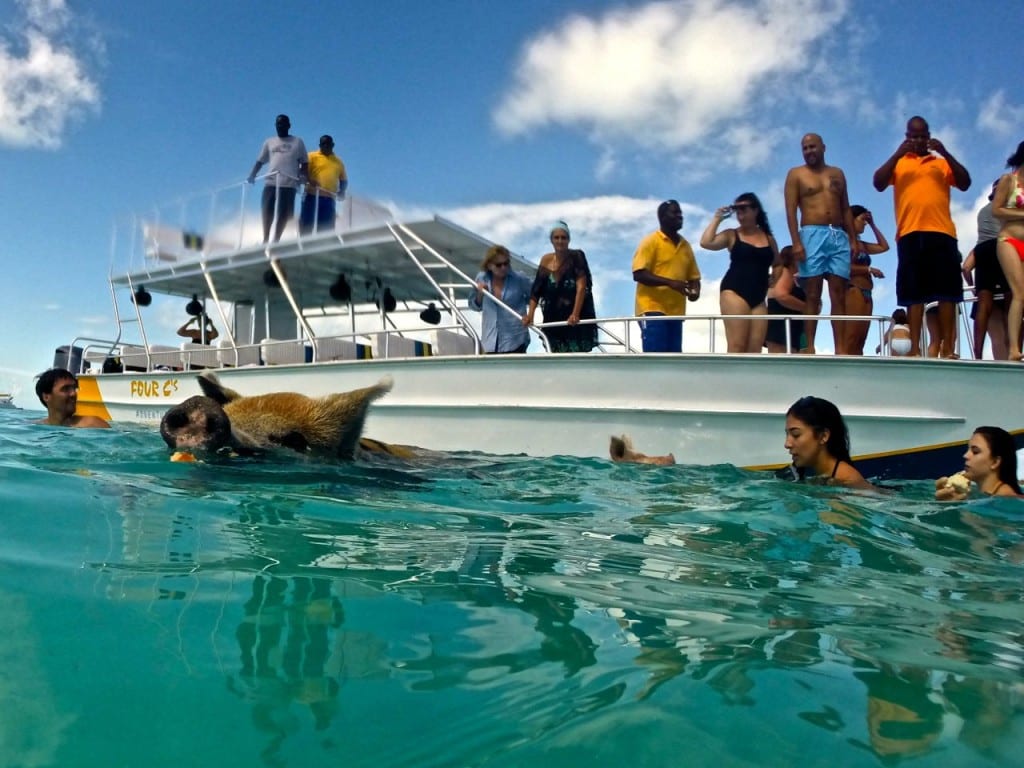 2. Where are the swimming pigs in The Bahamas?

Don’t be fooled by imitation pork. The bonafide swimming pigs living on Big Major Cay, an uninhabited island about halfway up the Exuma archipelago of 365 islands. If you hop on the 4C’s Adventures boat, it’ll take up to two hours to speed to that area of the Exumas from the settlement of Barratarre. 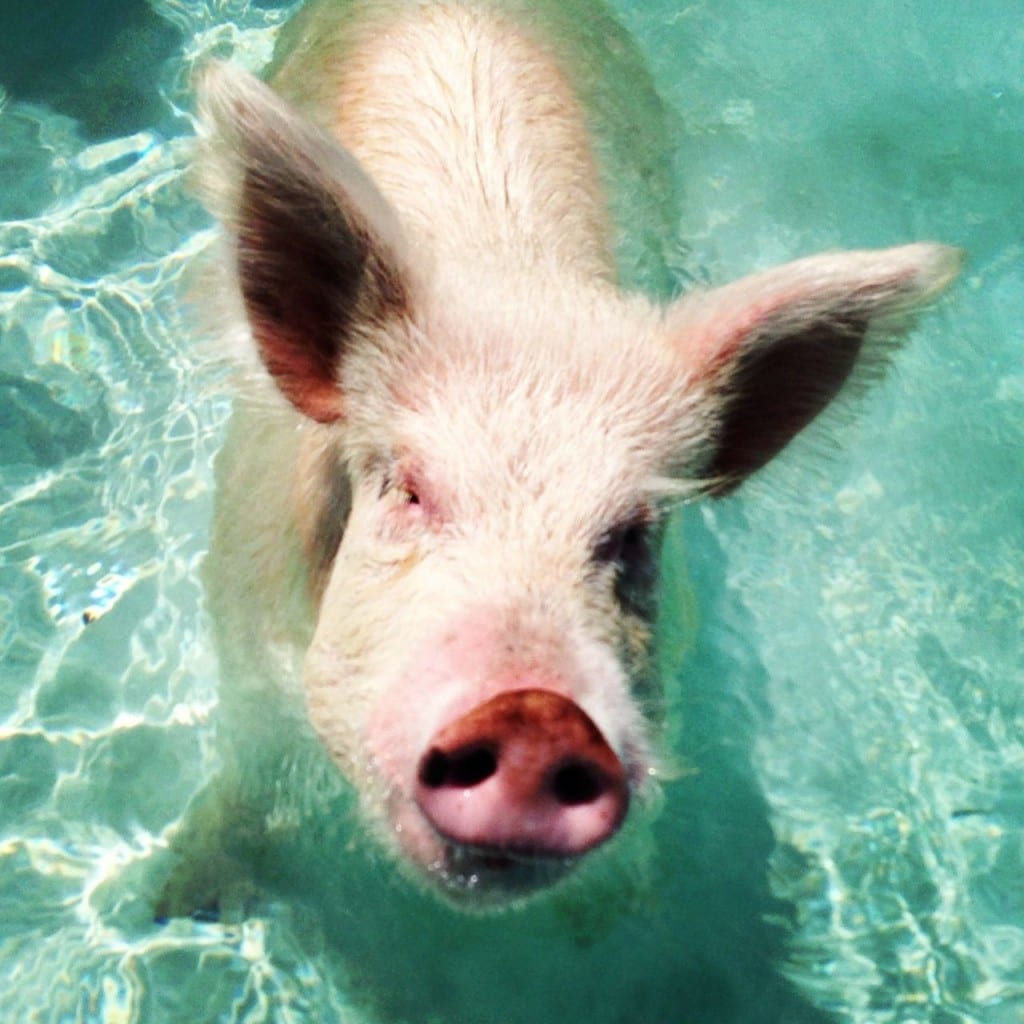 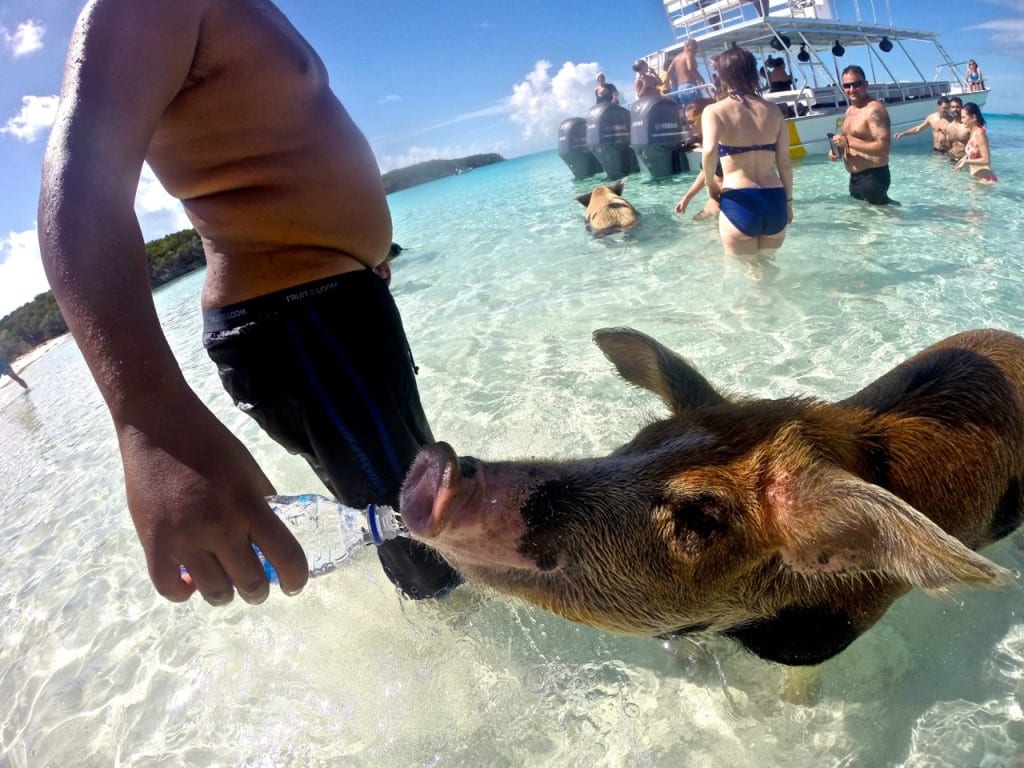 I’ve seen people act like swine in the presence of these national treasures – it’s just piggish! It should go without saying that you shouldn’t tease the pigs, throw rocks at them, or attempt to ride them. I’ve seen all three behaviors.

Also, feed the pigs natural food, not bread, cinnamon buns, macaroni and cheese, hot dogs, Poptarts, or beer. Stick with grapes, apples, lettuce and produce — they’re pigs, not American children for heaven’s sake. And it should go without saying, but don’t give them alcohol!

4. Take photos, but no selfies, please.

As sad as it is, most wild animals don’t want to be your friend. (Read: my bear encounters in Alaska) Usually, they just want the food in your hand.

Since their eyesight isn’t the best, it’s very easy for the pigs to confuse your GoPro for a tasty snack.  And if the GoPro is next to your face… things could go badly… for your face.

Having a GoPro was super useful for this occasion (and many others). Be sure to take safe photos and know where the pigs are at all times. Turning your back to them in order to take a selfie is a huge no-no. It can be done, but you might just get your ear nipped off! 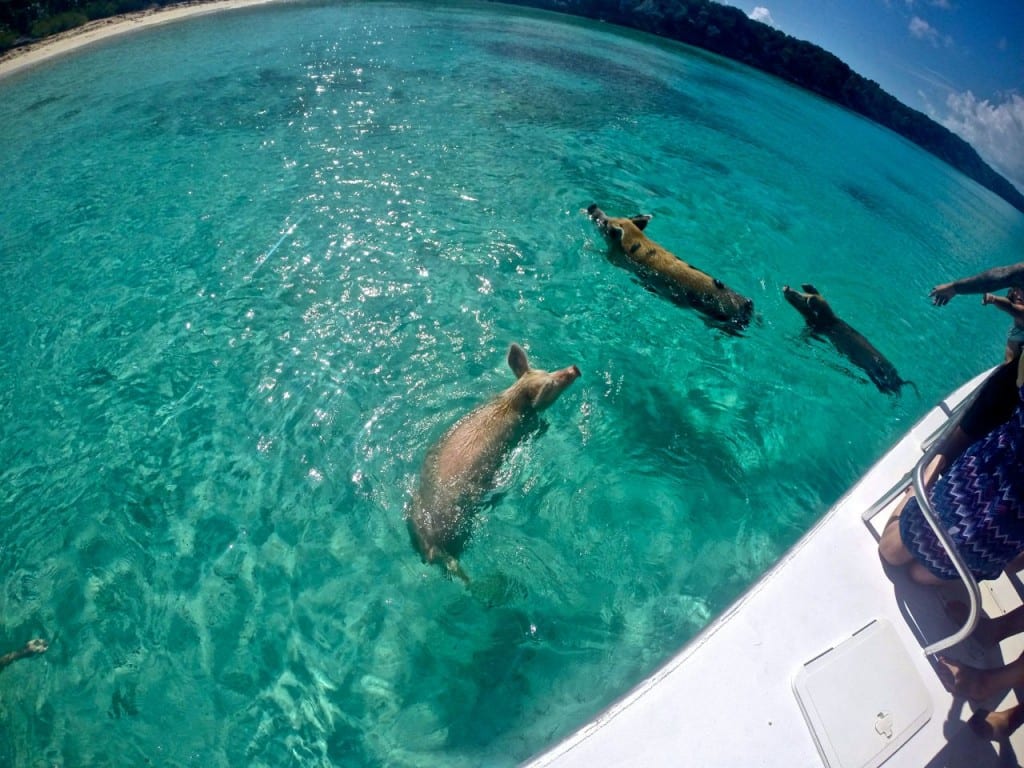 I like the swimming pigs, I really do, and I may get some heat for saying this – but y’all, they’re pigs. If they weren’t in the water, washing off their steamy tropical stench, they’d just be rancid livestock. In a pigpen, most folks would turn their noses up. But put them in sparkly turquoise water on a white sand beach and suddenly they’re the mermaids of the Exumas. 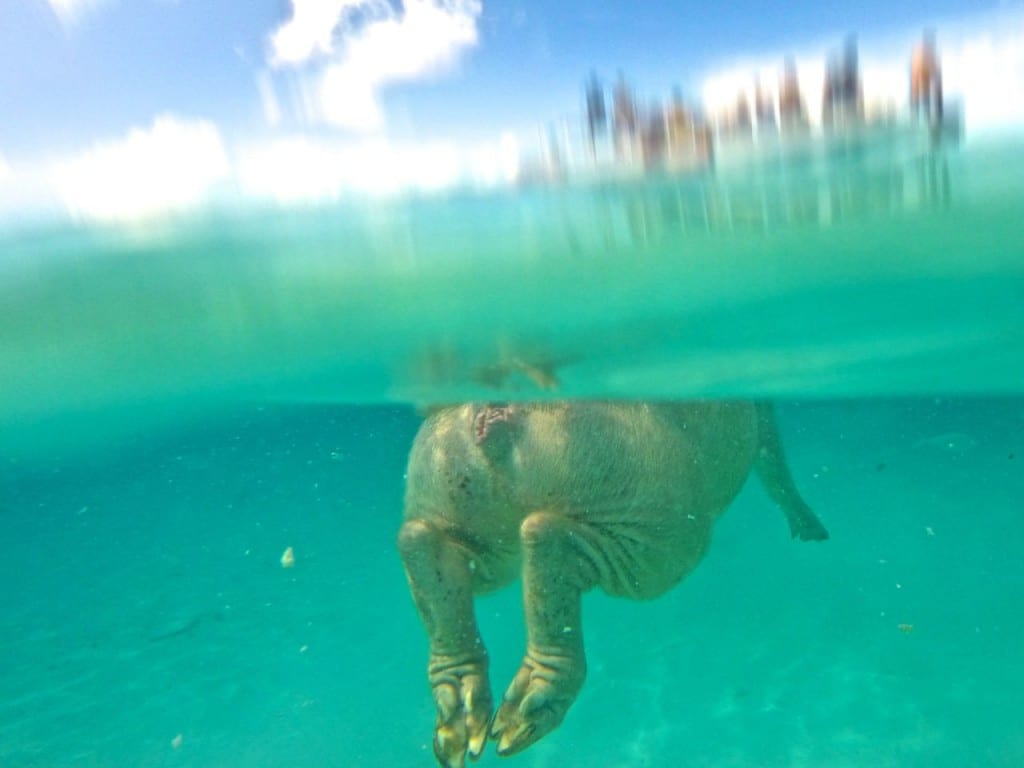 They still do all the things non-marine pigs do, like poo, only they do it in the water where you’re swimming. Just remember that when you’re diving in with your mouth agape in wonder. 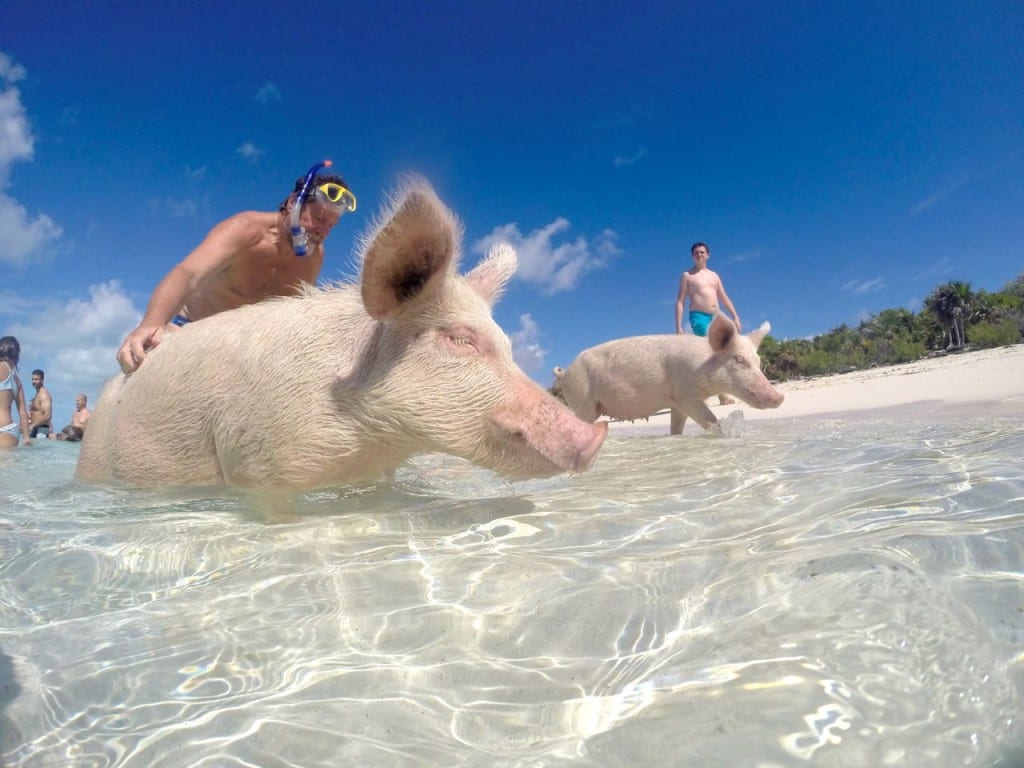 6. Be prepared for a crowd of tourists who haven’t read these tips.

As the pig popularity has grown over the years, so has the fan base. Countless boats, large and small, motor up to the beach every day and the piggies swim right out to meet the adoring crowds. Depending on the time of day, you could have Pig Island all to yourself, or you might share it with 50+ people. 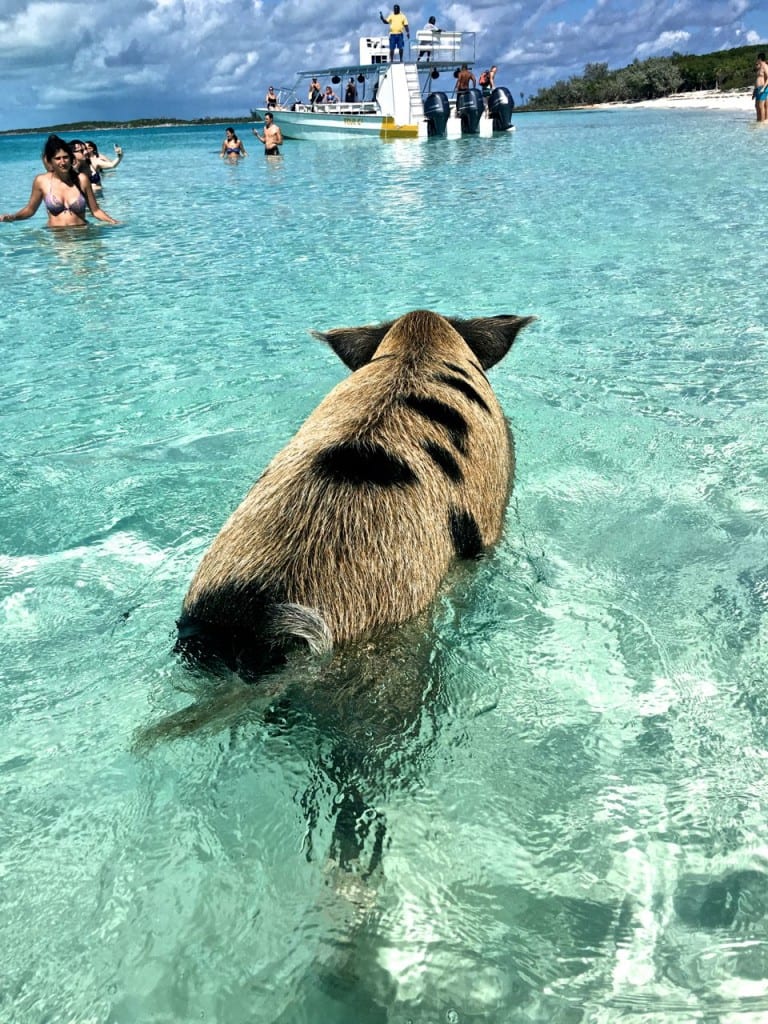 If you’re alone, you’ll have the chance to take some fantastic photos. If you’re sharing with lots of others, it’s going to be very difficult to take good shots. Be patient, follow the outlier pigs – not the ones who are swimming in the middle of everyone – and don’t be afraid to be the first person off or the last person back on the boat. You’ll get the best pictures without your fellow travelers in each shot. 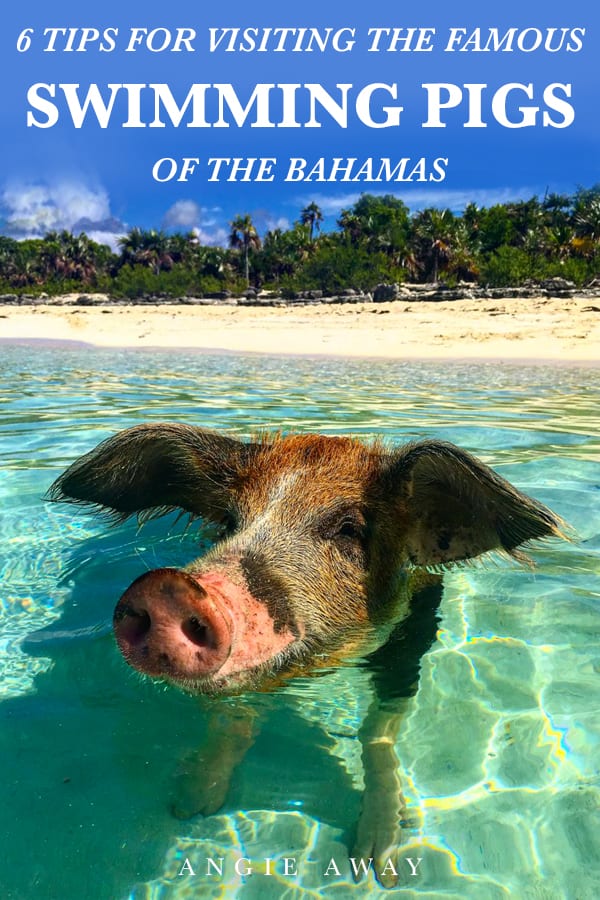