When Ford Motor Company invited me to explore some quirky roadside attractions in the Transit Connect Wagon this summer, I knew immediately who I wanted to bring along — my brother Alex and sister Rachel, the two best traveling companions I know.

There’s a 12-year span between oldest and youngest so folks are often surprised to see how close we are, but that’s just how we’ve always been. (It also helps that they’re both amenable to dressing up in costumes – the main requirement for joining me on an adventure!)

While we Tweeted, Facebooked, YouTubed and Instagrammed our way from Denver to Seattle making it seem like every moment of the #OrthAmerica adventure was captured on social media, there were lots of behind-the-scenes outtakes that never made it to the Internet. For example…

We got lost. Quite a bit.

While we mapped a tentative route using Roadtrippers.com, our daily wanderings were much less scripted. And not to point fingers, but every time Rachel was in charge of navigation, we got super lost. One morning, we ended up in Washington a full day before we were supposed to, crossing the border from Oregon and going about 45 minutes out of our way. One evening it took us a whole hour to find our hotel in Pocatello, Idaho, even though we could see it perched atop a hill.

GPS isn’t always foolproof, we quickly learned! But life’s more about the journey than the destination, right?

Our first state line photo was at the border of Colorado and Wyoming, and it came up out of nowhere so we drove right past it. It took about 20 minutes to get to the next exit, turn around, U-turn and safely park our #unminivan in front of the Welcome to Wyoming sign. We attracted some attention in the way of semi-truck honks while jumping around the side of the road in our cowboy/cowgirl attire, but the fun photos were totally worth the detour.

People stared & pointed at us.

To be fair… we were jumping around in front of our Ford Transit Connect Wagon holding cardboard signs in western wear. I suppose, at times, our behavior might’ve warranted a few glances. 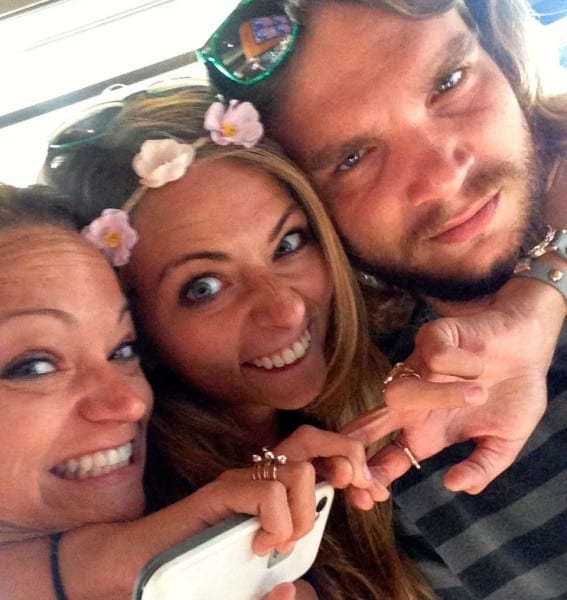 To us, it’s just another day in the Orth family.

We fought over who got to sit up front.

We don’t bicker about much, but who gets to ride shotgun has always been our ultimate family feud. If you’d been there, you would’ve seen us sprinting through the parking lot, elbowing one another as we raced to the front passenger seat. I concede we’re a little too old for such shenanigans, but I can’t help it if I think being the eldest entitles me to the front seat for all eternity.

We got a little too competitive.

Back home, we play a silly game called Yellow Car, shouting “YELLOW CAR!” anytime we see – you guessed it – a yellow car. We brought a dry erase board to keep track of our daily tallies during our road trip, and it got pretty nasty. Accusations of cheating flew, tempers flared – as much as they can among three generally mellow people.

No one dared take a nap in the backseat for fear they’d miss out on prime yellow car-spotting time on the highway. Want to know who won the week? Me, too. We gave up after a while and vowed never to play again. For the sake of future family gatherings, it’s best we just let this one go.

The West left us speechless.

Though we’ve each traveled quite a bit, there’s still nothing like visiting a new place that’s completely unlike home. We’re all based in Florida, so we’re used to greenery, humidity and sea level. Our experience out West left us in awe of landscapes that were so foreign. Dark storms rolling over endless miles of prairie, towering rust-colored buttes, charred volcanic craters and real life amber waves of grain wowed us at every turn.

One of the most memorable moments during the trip was when we decided to detour through the Snowy Mountain Range in Wyoming. Though we could’ve guessed that there would be snow in the Snowy Mountains, it didn’t seem likely in July. When we saw the first unexpected patch of frozen white precipitation still clinging to the ground, we started screaming “SNOW!!!” and pointing in a frantic and ecstatic way only Floridians can.

Snow is such a rare treat for us! As you can imagine, an epic snowball fight ensued immediately and didn’t stop until our hands were nearly frozen off. 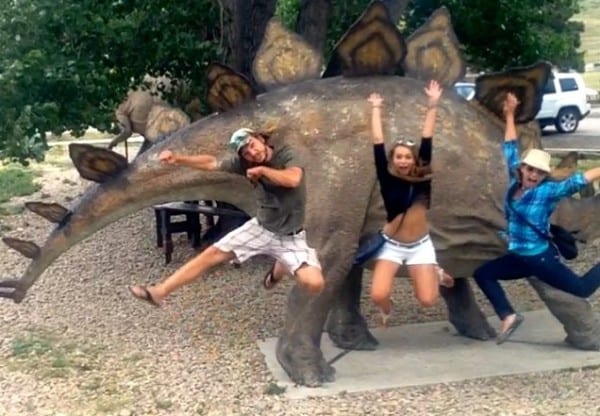 Sigh. Reliving just a handful of our best memories reminds me of how much fun we had on the trip. I’d do it all over again tomorrow if I had the chance… only next time, I’d probably make sure Rachel didn’t do any navigating…

Your turn: would you go on a road trip with your siblings? If not, who would you take and why?

6 thoughts on “Outtakes from the #OrthAmerica Road Trip”