Harry Potter fans, if there was ever a time to fire up that magical device we all know as a DVR, it’s this week!  You already know that The Wizarding World of Harry Potter – Diagon Alley is opening this summer at Universal Orlando Resort, but you might not be aware that I’m here, onsite, in the flesh, rubbing shoulders with some of the greatest wizards of our generation and sporting my Slytherin gear from head-to-toe for this week’s VIP preview of the spectacular new land. And yes, I’m geeking out to the extreme for 1,000 reasons… one of which is BUTTERBEER ICE CREAM.

The Muggle world is better place because this treat now exists.

If you’ve been to The Wizarding World of Harry Potter – Hogsmeade at Islands of Adventure, you know there’s nowhere else like it. Once Diagon Alley opens at neighboring park Universal Studios, it’ll be the only place in the world with an attraction connecting two separate parks under the same theme. Just like in the books & films, guests will be able to take the Hogwarts Express from King’s Cross Station in London to Hogsmeade. Eeeeeeee! 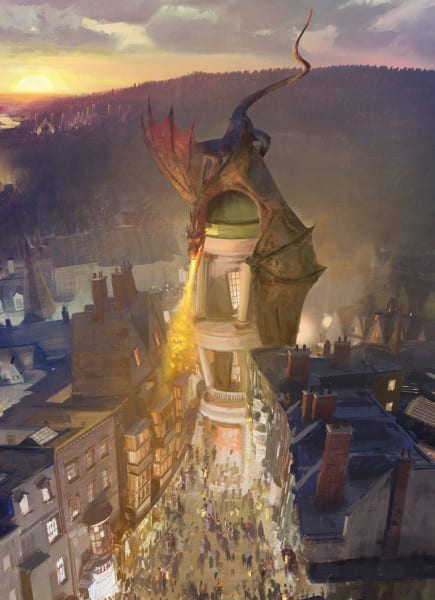 But that’s not all! Diagon Alley is a completely immersive new land (doubling the size of Harry Potter real estate at UOR) with new shops like Weasley’s Wizarding Wheezes (a tongue twister which I can not say correctly to save my life), Borgin & Burkes and Madame Malkin’s Robes for All Occasions; new dining options including the Leaky Cauldron and Florean Fortescue’s Ice-Cream Parlour; and an unprecedented, technologically advanced new attraction, Harry Potter and the Escape from Gringotts. And those are just a few highlights I’m most excited about… as with everything Universal Creative does, there are always a million more details and surprises awaiting once you pop inside the Wizarding World.

But don’t take my word for it! Check out some of the latest news…

For those of you wizards participating from home – never fear! If you have a TV, you shouldn’t have any trouble getting your fill of wizarding headlines all week long. Here’s a quick list of shows and times to DVR:

This particular show is dear to my heart, so when you watch, think of me and of course think of how grown up all of your favorite Hogwarts students are now.

The Tonight Show with Jimmy Fallon

Jimmy Fallon is bringing his NYC operation down to Universal to celebrate Diagon Alley, so you know it’s going to be hilarious & full of his typical shenanigans. Fallon’s guests will include Jennifer Lopez, Keenen Ivory Wayans, Kevin Hart, Jimmy Buffett, Pitbull & More. Lopez, Buffet and Pitbull will also perform on the show, as will fun. It literally can’t get more fun than Jimmy Fallon, Harry Potter and fun in one sitting!

I feel like Al Roker and I have formed a special bond over the years since I used to wave to him while dressed as Sarah Palin on my way to work in NYC. Now we’ve ridden Transformers 3D together a few times, and he’ll be back in action with his Today Show cohorts this week to show off Diagon Alley’s wonders.

Also keep an eye on:

Print media & online outlets & some of your favorite blogs will be going nuts this week with Harry Potter awesomeness, so grab your wand, robe & house scarf of choice — you really won’t be able to miss the news.

1. The first task you must complete before visiting Diagon Alley: get sorted!

Don’t just arbitrarily choose to be a Gryffindor because you want to be a hero – what about Snape, huh?! And please DON’T think for a moment that a silly, utterly non-magical Buzzfeed quiz can tell you where you belong. Short of rocking up to Hogwarts and getting sorted in person in the Great Hall by the Sorting Hat, the only legit way to find out which house you’re in is to go on Pottermore and take the test yourself.

2. As of today, Universal Orlando has not yet announced a date for the official grand opening, but you can be the first to know when you can book your vacation to the Wizarding World by following along on social media & keeping up with this week’s webcasts, live streams and HP cast appearances from inside Diagon Alley.

3. Get another job and save your galleons, because you’re going to want to spend it all at the new shops. Slytherins like me will enjoy Borgin & Burkes and animal lovers will go crazy for the Magical Menagerie (Luna Lovegood’s top choice). If you’re a fan, there’s no way you’re walking out of Diagon Alley without a handful of Quaffles, Bludgers and wands, so clear out your Gringotts vault and prepare to get lots of goodies for all the wizards in your life.

That’s it for now… I’m off to Quidditch practice, or you know, something magical like that. Happy Diagon Alley Preview week, everyone!

So, have you been sorted? Tell me in the comments — what house are you? And will you be making the trip to the Wizarding World once Diagon Alley opens to the public?

4 thoughts on “Guide to #DiagonAlleyPreview Week at Universal Orlando”