With the grand opening of The Wizarding World of Harry Potter – Diagon Alley just a few hours away, Potterheads and rabid theme park fans are already donning their robes and dusting off their wands outside Universal Studios Florida in preparation for the big event.

Since I was a part of the official Diagon Alley preview a few weeks ago, I thought I’d give you guys a sneak peek at 5 of the magical surprises that await you behind London’s Muggle facade.

Once you magically pass from London into Diagon Alley, you’ll find it hard to miss the dramatic and absolutely magnificent Ukrainian Ironbelly dragon seated atop Gringotts Bank.

Watch out for his occasional outbursts though – they’re both jarring and awesome.

2. Harry Potter and the Escape from Gringotts

I’m sitting in an office as I write this about 200 yards away from the newest, boldest, most ground-breaking theme park attraction ever developed – Harry Potter and the Escape from Gringotts – and I haven’t been on it yet! I’m hoping to pop over around lunch time to do some pre-grand opening “research,” so I’ll let you know how it is.

I won’t give away too much, because it’s well worth being surprised as you wander through Gringotts, but one thing is for sure — the queue is an experience in and of itself. You won’t mind waiting to board your vault car as you walk through the spectacular bank lobby and meet the freakishly lifelike goblins who run the place.

Around the corner, you can take your money to the Gringotts exchange and get Wizarding currency for your $10s and $20s. You won’t have any trouble finding goods to spend your new cash on either – there are so many new stores and so much new merch, it’ll be tough to escape Diagon Alley on the cheap.

Don’t miss the chance to have lunch at the Leaky Cauldron, where you’ll enjoy English pub-style food like bangers and mash, fish and chips and cottage pie. New drinks like Fishy Green Ale and Gillywater join everyone’s favorite frothy Butterbeer and Pumpkin Juice on the beverage list, so don’t forget to try a few. 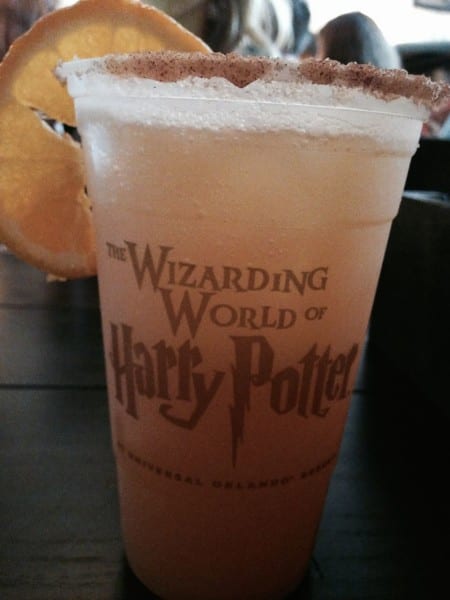 And whatever you do, don’t miss Florean Fortescue’s Ice Cream Parlour, home of new & extremely delightful Butterbeer Ice Cream in all its soft, creamy, perfectly-cold-on-a-hot-summer-day glory. It tastes exactly like the drink, so just prepare yourself now for a magnificent overload of sugary sugar.

As with everything in the Wizarding World, this is no ordinary train ride. Everything about your journey from London to Hogsmeade is magical, and I just know everyone is going to love this experience! The family friendly trip from Hogsmeade to London is different than the reverse journey, so be sure to go both ways between Islands of Adventure and Universal Studios.

It’s also cool to note that this is the only attraction in the world that connects two separate parks under the same theme. Don’t forget you need a Park-to-Park pass to ride.

You don’t have to be a Harry Potter fan to appreciate the attention to detail and the truly astounding level of excellence at every corner of Diagon Alley, but it wouldn’t hurt to read the first book or watch the first hour of the first film before you come.

There are surprises and Easter eggs everywhere you look – seriously, EVERYWHERE – including cool hidden homages to JAWS, the attraction that once occupied Diagon Alley’s real estate.

The Universal Creative team is the smartest, most clever group of people you could ever hope to work with, and I just can’t get enough of their work. There really is no theme park in the world with this unfathomable level of detail and a burning desire to produce the most authentic experience possible. I can’t get enough.

As I’m wrapping this post up, I keep thinking of other can’t-miss moments inside Diagon Alley – the interactive wands, the entertainment performances, the house elves who lurk in the windows… there’s not enough room here to share everything, so you’ll just have to come see for yourself!