My dream, once I stopped the perpetual motion of full time travel, was to decorate my permanent space in a way that reflected all of my international jaunting — bold Moroccan patterns, bright colors and thoughtful souvenirs from around the world. About 11 months ago, I signed a lease on my first apartment since quitting my job to travel in 2010, and embarked on a brand new adventure – living alone. (Sort of. My little sis has been a squatter for most of the time…)

Over the past year, I’ve inadvertently moved away from my initial plan of patterns and many influences toward my first travel love, the UK. Now I find that more of my décor features maps of the Tube, waving solar Queen Elizabeths, subtle Harry Potter & Downton Abbey flair and of course, Union Jacks.

Why the Union Jack? Two reasons really. One, every time I see it, I’m reminded of my first overseas visit when I was 16, a trip to London. I was enthralled with the accent (everyone sounds like a documentary narrator), the layers of history down every street, the Underground (Mind the Gap!) and the monarchy. Having now been around the world a few times, one glimpse of the flag reminds me of a time when getting on a plane to cross the Atlantic was a huge deal. When foreign accents were sexy and unusual. When travel was an unreachable dream rather than my reality.

The 2nd reason I like to use the Union Jack in my DIY furniture makeover – you don’t have to be an artist to recreate the flag, and you can customize the colors to match your scheme and still retain the general connotation. It doesn’t have to be red, white & blue to remind me of palaces and parks and tradition and the Thames. Pinterest is overrun with bold furniture pieces overlayed with the Union Jack, so I took some inspiration from there, added my own bedroom colors and attempted to create my own unique nightstand.

If you haven’t heard by now, I’m a little bit crazy about the IKEA RAST. You might remember my last RAST hack, an Underground map TV stand. Check out that DIY tutorial here. I now have four RASTs in my tiny apartment. They’re unbelievably cheap ($35) and easy to put together (confession: I’ve got a guy who does that for me.) As far as side tables go, they’re great for extra drawer space, and their flat fronts make for very easy painting, stenciling and Mod Podgeing.

Watch a tutorial first. Sometimes I forget that YouTube has a video answer for everything, including DIY furniture makeovers. I wish I’d watched a couple of these Union Jack-drawing/painting tutorials before I attempted mine. It simplifies the process just a bit.

Use painter’s tape. This project is nothing but straight lines, so painter’s tape is a must. I don’t know why I have a mental block about this, but for some reason in my last couple of projects I’ve labored under the delusion that I can just freehand a straight line. I can’t.

If you look closely at my nightstand, you’ll see lots of little wiggles. It’s a full on Monet, from far away it’s great, but up close it’s a big old mess. So stand back and admire from afar, folks!

Make sure your drawers are all facing the right way before you start. I’m a smart girl, but sometimes I do really stupid things. I drew the flag onto the three drawer fronts in pencil, placing them face up, one right on top of the other. It wasn’t until I was just about to paint that I realized I had one of the drawers upside down. Fortunately I caught it in time and was able to flip, erase and redraw the lines, but had I painted it, I would’ve been in a real pickle. Just pay careful attention to little details like that. 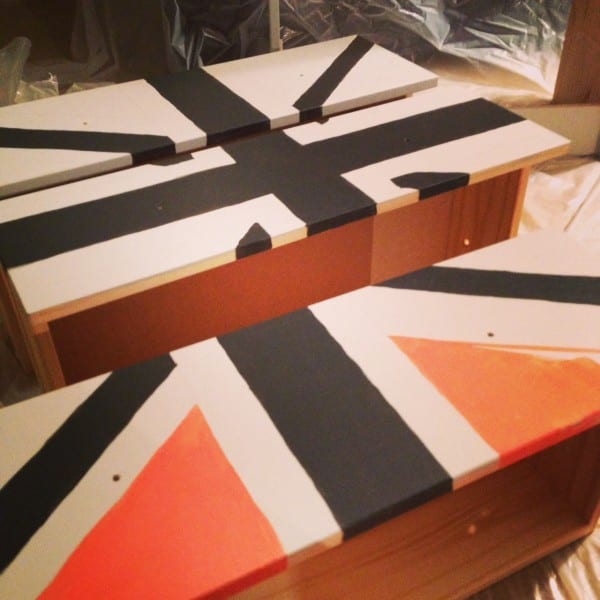 After the paint dried, I added clear plastic IKEA SÄTTA drawer pulls  – 6 for $2 – and a spray of clear topcoat to protect the whole thing.

Just like that – a nightstand fit for a queen. 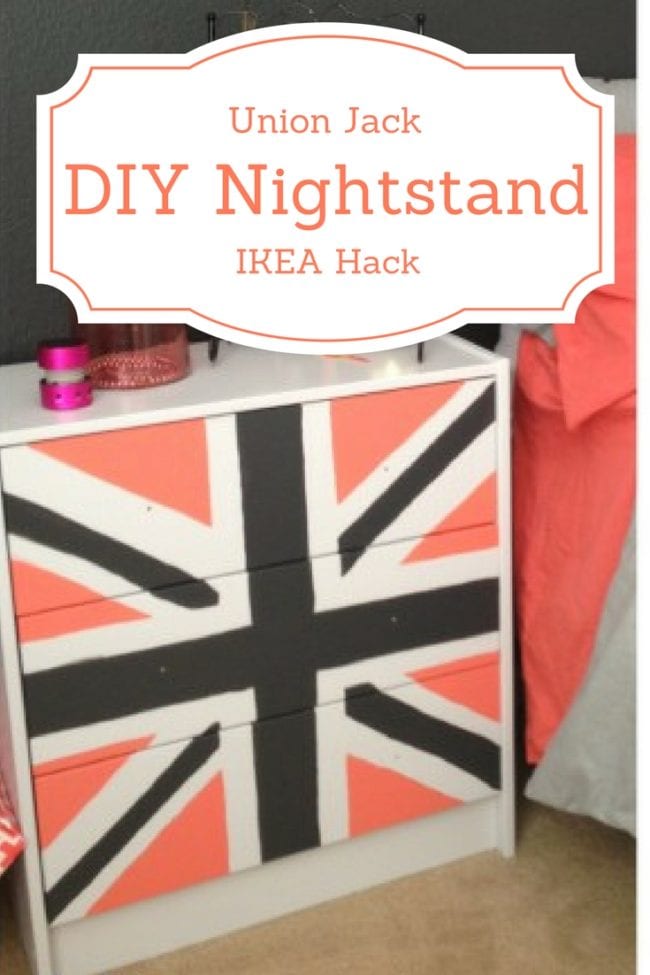 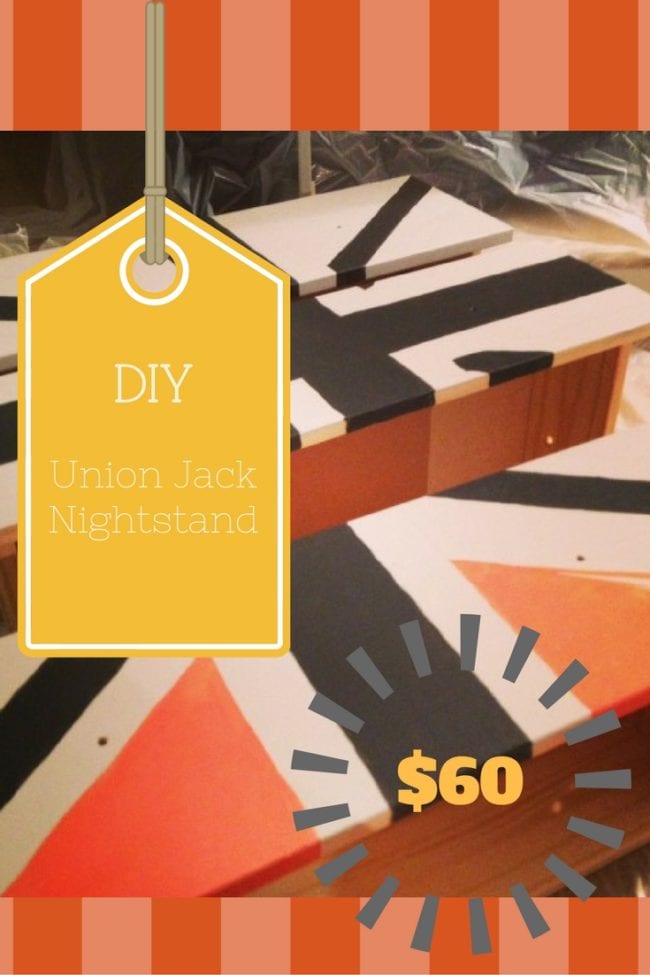 So that’s my DIY project for February. I’m super proud of it, even though the lines are just a little squiggly. Would love to hear what you think!

Have you ever used the Union Jack, or flags from other countries, to decorate your place? Are you into DIY furniture makeovers like I am, or would you rather just buy things ready-made?

1 thought on “Angie at Home: My DIY Union Jack Nightstand”