For sheer concentration of unique, adrenaline-pumping activities, I’m not sure I’ve met Queensland’s equal in all my world travels. In a week jam-packed with heart-pounding experiences, there were very few moments that didn’t involve some sort of harness and/or helmet, and I spent much time soothing my nerves with deep breathing and calming self-talk. Let’s just say I’m not as brave as these photos make me look.

In no particular order, here are my 10 favorite activities in Queensland guaranteed to freak out your parents and challenge your limits.

1. Jungle Surfing in the Daintree Rainforest

To view the protected Daintree Rainforest at Cape Tribulation like the jungle critters do, check out Jungle Surfing Canopy Tours for a wild experience where your feet never touch the ground. Once you’re outfitted in a harness and helmet (complete with sassy superhero/movie villain name – if I remember correctly, I was Catwoman), you’ll ascend to the first of 5 platforms, the highest being more than 60 feet above the jungle floor, and race from platform to platform on flying fox ziplines.

As with anything else in life, the first step off the platform was the toughest. By the time I reached the last zip, I was hanging upside down like a Cirque du Soleil performer. Look ma, no hands! 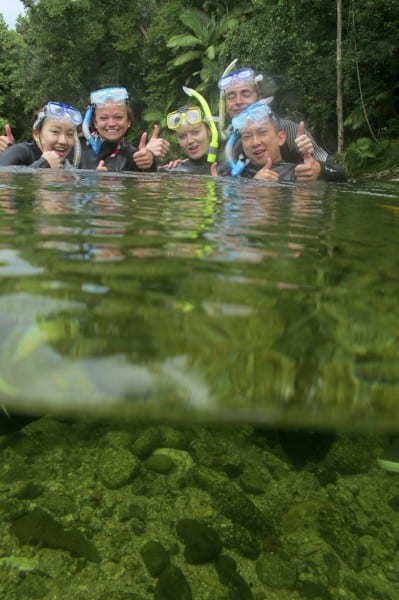 Call Barney & his team at Back Country Bliss the moment you know you’re going to be in Port Douglas, because river drift snorkeling in the rainforest is an experience you can’t get anywhere else. You just might run into an elusive platypus on this adventure, but chances are you’ll be too busy enjoying the jungle canopy overhead and the crystal clear water below to glimpse any wildlife. Conditions vary depending on the season and how much rainfall there’s been, so plan ahead. And expect to be at least a little chilly – take the wetsuit when offered!

Cairns Wildlife Dome, with its 60 species of native creatures, sits atop the Reef Hotel Casino in the heart of Cairns. And while the animals are great fun to interact with, this place is more than a wildlife habitat. Adrenaline junkies come here for the four-pronged adventure circuit: ropes courses, zipline, Dome Climb and the scariest of all – the Power Jump.

To warm up, there are 65 ropes course obstacles – several I found to be incredibly challenging to mount at 5’3″! But I did them all and in record time – I earned my nickname for the day, Speedy Gonzalez. In the midst of the obstacles, there are four ziplines of varying lengths and heights, one which zips you right over Goliath the Crocodile. (He must be a lazy croc, because he could undoubtedly pop up for a tourist snack at any time.)

After the ropes course & ziplines, you walk outside the glass Dome for a 360 degree view of Cairns. For anyone with a fear of heights, this might be pretty frightening, because you really are just hanging out atop a metropolitan building. Climb back inside and get harnessed for the most challenging experience of the day – the Power Jump, a controlled descent where you step right off a platform and drop 43 feet to a trampoline below. It took me several attempts and 3, 2, 1 countdowns to step off, but once it was over I realized it wasn’t so bad. And I’d definitely do it again!

AJ Hackett Cairns is the premiere place in Queensland to test the limits of your resolve. There’s the Bungy jump, a 164-ft. leap of faith that I was only about 1% interested in attempting, even with the amazing Jump Menu featuring 16 creative ways to hurl yourself at the ground.

Instead of the Bungy, I chose to suit up with two folks I just met in a swinging contraption, drop 150 feet out of the sky until pulling up about 3 feet from the ground, then using the fall’s momentum to swoop upward in a pendulum motion. Wanna see me almost lose my mind? Check out my experience on the Minjin Swing.

I’d never driven an ATV before visiting Blazing Saddles, a horse-riding and four-wheeler outfit on a working sugar cane farm outside of Cairns. I was so timid about driving, I immediately went for the smallest, least powerful ATV to use on a few practice laps around the muddy, windy track. After getting about halfway through, and getting rear-ended quite forcefully by another rider, the instructor saw some daredevil potential in me and upgraded me to his machine, a much bigger, much tougher, much dirtier ATV.

The next thing I knew, our group had been split into two sub-groups – the slower folks and the fast ones. Somehow, timid me ended up representing girl power as the only female in the fast group, and by the end of the wicked trail around the farm, past the lake and up & down some steep hills, I was covered in mud and completely stoked and ready to buy an ATV of my own. GoPro footage of me catching air coming soon!

To be honest, hot air ballooning hasn’t got my heart pumping too much since the first time I did it in Cappadoccia, Turkey in 2011, or the second time in Luxor, Egypt, or the third time in Costa Brava, Spain, but for anyone who hasn’t been up, up and away in this manner, it’s definitely something for the bucket list. The best part about hot air ballooning over the Atherton Tablelands was the birds’ eye view of wallabies everywhere I looked, and the camera suspended in front of our group that snapped shots every so often as we took in the vast interior of Queensland.

Queensland has to be one of the top 3 places in the world to check off the critter-snuggling (not to be confused with smuggling!) bucket list items. In a matter of days, I cuddled a koala, spoke with a snake, made friends with a crocodile and had lunch with a lorikeet. It’s a kid friendly adventure but also it works pretty well for wannabe animal-show hosts like me!

8. Snorkel on the Great Barrier Reef

Lovers of the sea all have one thing in common: the desire to see the Great Barrier Reef at least once! From Cairns, it’s super easy to get to it via Fitzroy Island, a resort complex about an hour from downtown Cairns by boat. Once you get there, you can SUP, visit with turtles at the rehabilitation center, sip an umbrella drink, take a glass bottom boat tour or snorkel on the reef that fringes the edge of the island.

For a reef you can just swim over to, the coral and sea life were fantastically bright… however, I realize I’ve now visited the Great Barrier Reef twice in my life and I still haven’t been scuba diving on it. Third time will be the charm, mark my words!

What I thought was  going to be a leisurely jaunt through the countryside was actually one of the more white knuckle experiences of the whole trip to Queensland. We pulled out of QT Port Douglas like it was on fire on that little yellow trike, with a bearded man named Grub at the handlebars. Though I found our hosts’ biker sensibilities to be a little intense for my taste, I can’t deny that my heart was in my throat as we aggressively charged hairpin turns on an open air trike.

There’s nothing like a cultural experience with Brandon & Linc in Cooya Beach to show you the real adventure of growing up in the wildest areas of Queensland. The Kuku Yalanji brothers took us on one heck of a walk in the mud flats, mangroves and jungle, where we speared crabs and gathered snails for lunch. We avoided encounters with saltwater crocodiles and other adrenaline-starting predators, but regardless, it was an adventure you can only find in Queensland.

Now that you’ve had a glimpse of the adventures awaiting in Queensland, how bad do you want to go? Watch this space, as I have many more posts featuring the adrenaline-spiking activities, beautiful resorts and wildlife experiences of Cairns and beyond. In the meantime, check out my Get Challenged in Tropical North Queensland album on Facebook . Special thanks to the folks at Tourism Queensland for organizing the trip! All opinions are my own.

9 thoughts on “10 Adrenaline-Pumping Adventures in Queensland”