Putting my Survival Skills to the Test in Queensland. (Hint: I’m Dead.)

Much of my visit to Queensland, Australia, was spent in a state somewhere between panic and hyperventilation. With the encouragement of equally nervous new friends, I conquered adventurous activities I never dreamed I’d do — and I have video to prove it!

Fortunately for my nerves, not every moment of my trip to Australia’s Sunshine State featured an adrenaline rush. Some of the most epic challenges I faced were matters of skill — not guts.

Sadly, I learned that when it comes to hunting & gathering like one of the Kubirra Warra brothers I met near Port Douglas, I definitely have more guts than survival skills!

Since we were perched at the water’s edge for our initial spear-throwing lesson, my first question was, “WHAT ABOUT CROCS?!?!”

I’m a rule follower. I like signage that gives me clear direction. With the one above, I was quite happy never to dip a toe in.

After our lesson though, Linc & Brandon instructed us to leave our shoes on the shore and charge right into the murky flats with our spears (sticks with point edges – not enough for croc defense), I was like, “Hey, mate… um, WHAT?”

No for real. WHAT ABOUT CROCS?

Apparently, there are crocodiles in this area but they probably wouldn’t be a danger to us. I couldn’t really argue with the guys who’ve been there for thousands of years, now could I?

Even still, I made sure to stay in the middle of the group as we hunted for lunch, lest I be picked off from the edges as a meal for some other hungry critter.

In addition to crab-spearing lessons and hunting efforts, I found out you don’t need a drugstore in Tropical North Queensland because the plants & animals, if you know what to do with them, pretty much cure everything! One plant has tiny fruits you can squeeze into your eyes if they’re itchy or dry – it’s an all natural eyedropper. There are several plants that you can grind up & drop in the sea, where soon after all the nearby fish will float to the top, ready for you to gather & eat. There were leaves that could cool burned skin, tasty flowers with medicinal properties and all sorts of edible snails and mollusks just ready to be scooped into a boiling pot of water for lunch.

AND, for a very special treat, I learned that the booty-end of a green ant tastes just like lemon. How about that?! I love how the land & sea provide everything needed to survive.

In case of apocalypse, I’ll be with Linc and Brandon…

Spread out across the shallow, muddy flats, members of the group hunted crabs and other sea critters. We were hoping to catch enough for lunch, and despite clever photographic evidence to the contrary, I was no help at all.

Several other members of my group were able to spot and spear crab – which run something like $100 each! If I could’ve figured out how to be a better crab grabber, I might be able to move to Australia and live in a nice beach house, eh?

After capturing a bucket of crabs, we made our way from the flats into the tangled mangrove forest to search for edible snails and mollusks. The mud was thick and hot, and it sucked my bare feet downward every time I stepped. The mosquitoes were hungry & plentiful, and I was getting dirtier and sweatier by the second. But guess what? It felt like a real adventure, the kind I used to have as a kid, plus, it was an eye-opening (and moistening) glimpse into the life of Australia’s aboriginal tribes.

Takeaways: I am fairly certain that I’d be dead in less than a week if it came down to me finding my own crab & snails. (I’ll be stockpiling Snickers & Oreos in case of emergency.)

But for now, crab spearing is all in good fun, right? If you’re not too prissy to get your feet dirty (ok, filthy!), a day with Brandon & Linc in Cooya Beach is a really wild and authentic way to experience adventure in Queensland – without having to scale a tall building or jump off anything precarious. The fellas can customize the length of the tour to fit any age or fitness level. We did some lengthy trekking – something like 4 miles over the course of the morning – but it’s possible to ramp it up or tone it down depending on your group.

It may not have been the most adrenaline-pumping adventure of a week in Queensland, but it was fascinating and I felt like I had a much better understanding of what it meant to be in the Kuku Yalanji tribe after we’d finished.

And was that crab ever delicious!

Thanks to Tourism Queensland for setting up my visit with Linc & Brandon. All opinions and lack of survival skills are unfortunately my own.

Pin Me For Later

How To Leave Your Dream Job To Travel 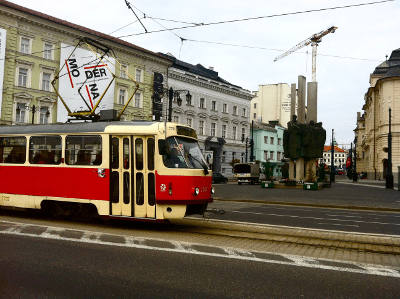 Just a Day in Bratislava – Is it Enough?

Reflections from the Road | Vol. 6