Now that Florida is once again my home base, I am rediscovering all the Sunshine State has to offer.

I love that from north to south and east to west, there’s such a wide variety of things to do from beaches to history and theme parks to scuba diving. I could live here the rest of my life and never exhaust all the possibilities for adventure. And I’m not saying that just because Visit Florida invited me to check out the iHeartRadio Summer Pool Party at the Fontainebleau last weekend, I’m saying it as a native Floridian!

Now that baby sis is in college (studying advertising & public relations – what else?!), she never has time to travel with me. Luckily her summer classes ended last Thursday, so the next day, we hopped a 50-minute flight to Miami to celebrate A. the pool party and B. the fact that she never, ever has to take another math class. A monumental occasion!

RaeRae and I stayed at the iconic Fontainebleau Miami Beach – and I don’t use the term iconic lightly. Originally constructed by world famous architect Morris Lapidus in 1954, the property has recently been restored to its former glory, complete with Ai Wei Wei chandeliers and bowtie tile floors. Since the majority of our time in Miami was spent focusing on the pool party and the concert, I didn’t get my fill of hotel history – so I’ll be back for the behind-the-scenes tour in the very near future.

When I tell folks I meet around the world that I’m from Florida, they automatically assume I mean Miami – which is extremely flattering. Miami is just so chic – the high rises, the art deco architecture, the yachts, the turquoise water, the skin-tight outfits and never-ending parade of good-looking, very tan people. Anyone from the Sunshine State can tell you, North Florida≠ South Florida, so I’m just floored anytime someone thinks I could hack it in a place with so much fashion sense and sex appeal.

After a swanky dinner at Bianca at the Delano on Friday night, where I caught up with Sara, a friend and former colleague from my PR days at Weber Shandwick NYC, RaeRae and I briefly checked out the kickoff party back at the Fontainebleau and then turned in for the night.

Saturday was destined to be a whopper of a day, and we needed our beauty sleep!

As if staying at the Fontainebleau and attending the weekend’s events weren’t reason enough to spend the weekend in Miami, I found out a few weeks before the trip that blog / work / IRL friends Kristin and Alex would be there, too. “SHUT UP. THIS.IS.BEYOND” text messages ensued and we were all thrilled to be united in one place once again. I hadn’t seen Alex since Kauai in October and Kristin since Wizarding World of Harry Potter in 2010.

And what better place for a group of beachy girls and their guests to reunite than Miami?

After a good deal of wining, dining and yachting, it was finally time for the Ultimate Pool Party to begin in the bowtie pool at the Fontainebleau. Frankly, I didn’t know what to expect from the pool party or the official concert scheduled for later that evening — or if I’d even enjoy it.

I knew we were in store for performances from Icona Pop, Ke$ha, Jason Derulo and Pitbull – all artists I’ve heard of. But I wasn’t 100% clear on where Afrojack, Krewella and DJ Prostyle would factor in, and what Miley Cyrus and LL Cool J were going to be doing as official “hosts.” (Spoiler alert: we saw about 30 total seconds of Miley. There was no Party in the USA singalong, much to my disappointment!)

Most of the time, RaeRae and I cooled off in the Visit Florida cabana just to the right of the stage, but during the acts, we wiggled our way to the edge of the pool for a closer look.

Jason Derulo’s set was so much fun – who knew I knew SO many of his songs? – and his backup dancers were phenomenal. RaeRae has decided if PR doesn’t work out, she’s going to be a backup dancer. So yes, we learned a lot of important lessons this weekend!

The pool party was wild and crazy, and exponentially more intimate than I’d imagined. The whole crowd was excited and soaking wet and splashing and really getting into it – and the energy was contagious, especially during Krewella’s set. We LOVED them!

The whole pool party experience just encompassed everything you want in a visit to Miami – sun, water and music on the beach. I couldn’t have had any more fun… and yet, I had only a few hours to shower, change, dine at Fontainbleau’s Gotham Steak (mmmm NY Strip!) and meet Ke$ha and Krewella for photos before starting the next round of concert insanity.

The day kept up its hectic pace and after meeting Krewella and Ke$ha, it was finally time for the headliners to perform. Yay, excitement!

Even my Dad can attest that Ke$ha’s songs are fun and catchy, so I was looking forward to singing along in the crowd. But oh, Ke$ha, Ke$ha, Ke$ha. I can’t imagine a person saying some of the things she said in a hushed whisper much less over a PA system in front of 5,000 or so people… and I think it says a lot about the music industry today. But I’ll save my commentary for another time.

Her set was pretty much the weirdest I’ve ever seen, which in and of itself is not a bad thing… from inflatable hippos to backup dancers in animal costumes to a lot of shrieking and thrusting. I will say her leotards were incredible, and for that I give her props.

Much to my relief, I didn’t have to cringe or hold my hands over RaeRae’s ears during Pitbull’s set, a fast-paced, bilingual dance party in which I realized that he is a participant in almost every song on the radio. The announcers weren’t wrong when they dubbed him the Mayor of Miami.

Mr. 305 was the perfect headliner for the whole iHeartRadio experience, and I was pleasantly surprised at just how much fun we had shaking it to all his hits. 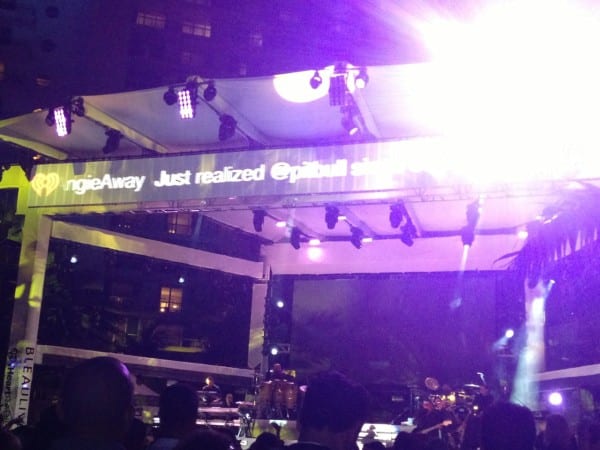 My tweet on the big screen. I think I’m famous.

Lessons learned from the weekend? Miami is glorious. Sunscreen is necessary. Pitbull and Krewella are my new faves, and my previous thoughts on Ke$ha remain the same. Yachts are the best place for meetings. The Fontainebleau is everything it’s cracked up to be.

And my home state of Florida continues to impress me. Perhaps moving back home was a good idea after all!

Enormous thanks to Visit Florida for hosting us this weekend, and to The Fontainebleau, iHeartRadio and all the partners for putting on such a brilliant event. All opinions are my own, as always.

10 thoughts on “Summertime in Miami: Greetings from the iHeartRadio Ultimate Pool Party”