This just in from Morocco – me! And I’m completely shattered and jet-laggy and longing for any time of year except December, when frenetic running to-and-fro hits an all time high.

While I attempt to sort out my clothes & souvenirs from Hawaii & Morocco, order Christmas gifts for the family and prep for a 5-day work trip to the Bahamas this weekend, I thought I’d share a handful of important Moroccan words & phrases in case you’re heading there soon, along with a few of my favorite shots (of 1,500 total pictures – yowza) from my #akaway Intrepid Travel trip.

Things you didn’t know about Morocco 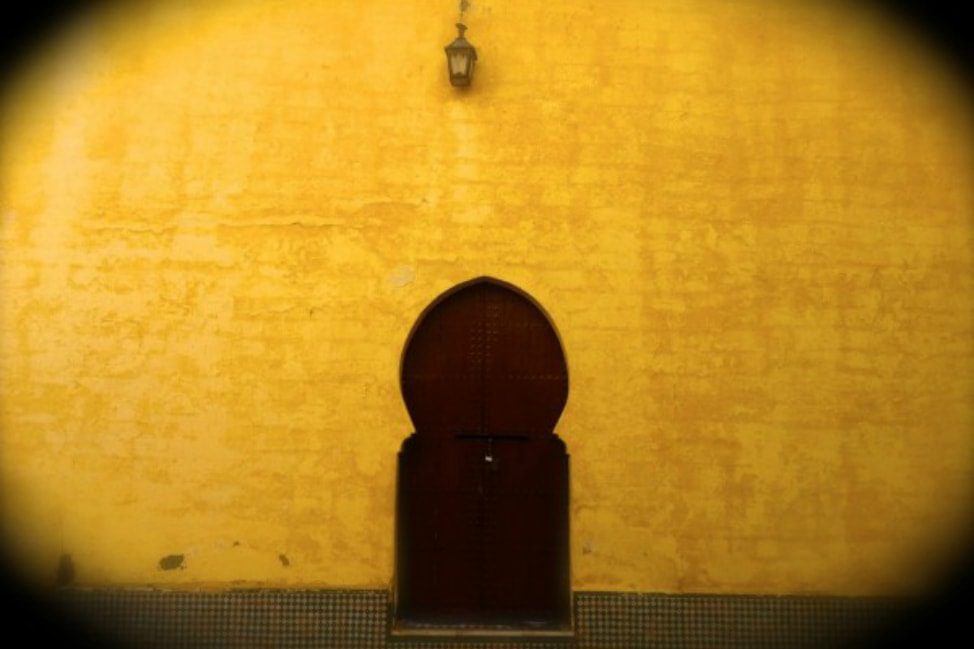 A bright yellow wall in Meknes

The Berbers have lived in North Africa for thousands of years, their existence recorded as early as 3000 BC. There are many different tribes & and 300 dialects of Berber spoken throughout North Africa. According to my guide Hassan, Berber is rarely written down and the dialects vary so much that it’s difficult for tribes to understand one another. And since the original Berbers of ancient days have intermingled with other ethnicities, the term Berber today relates more to language spoken than race.

I can’t tell you how many times I was called a “Berber woman” while haggling in the marketplace, a term referencing the shrewd reputation of the female Berbers. Everything you might find in a souk stall – a silver teapot, a bracelet, a bag, a style of shoe – might be called Berber by the shopkeeper. Whether it is or not, who the heck knows? The important thing to know is the Berbers have a huge effect on Moroccan culture & you’ll hear the term many, many times each day. 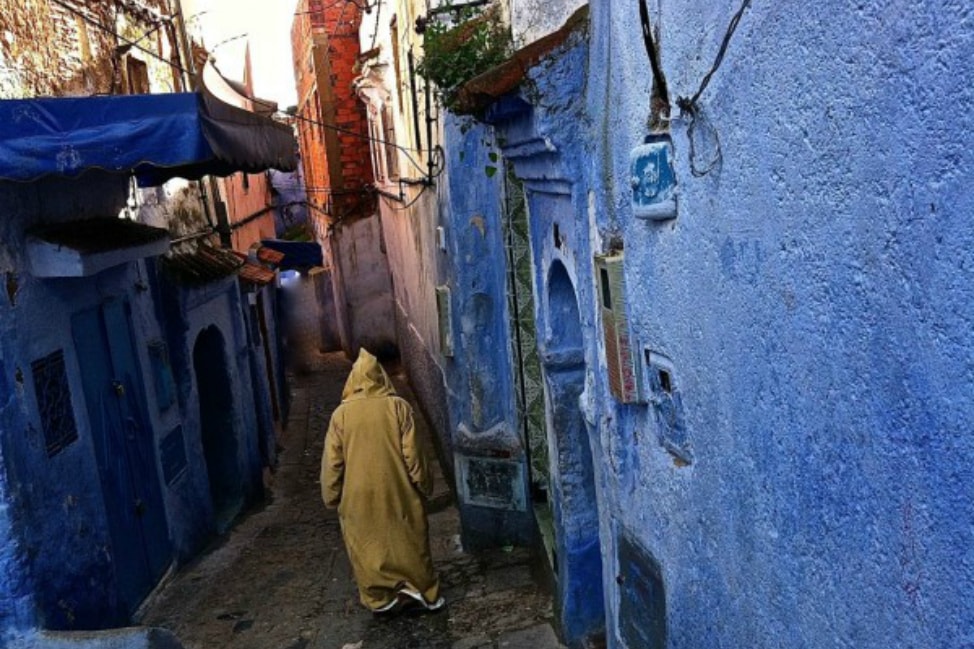 A jalaba-clad man on the blue streets of Chefchaouen

Ah, the Moroccan Snuggie! A jalaba (djellaba/jellaba) is a traditional Berber robe with long sleeves & a pointy hood (known as a qob and often used as an extra pocket for carrying small items home from the market) worn in North Africa. If I hadn’t spent the majority of my money and luggage space on Princess Jasmine costumes & snazzy leather goods, I’d have brought one home for my dad.

The jalaba is long, roomy and warm, so you can eat couscous until you feel like exploding, then have a lie down for a cozy nap without ever needing to change into pajamas. And from a certain angle, it looks like a rather cute elf costume.

In the Atlas Mountains, the color of the jalaba indicates a person’s relationship status. It’s like Facebook feed for your wardrobe. 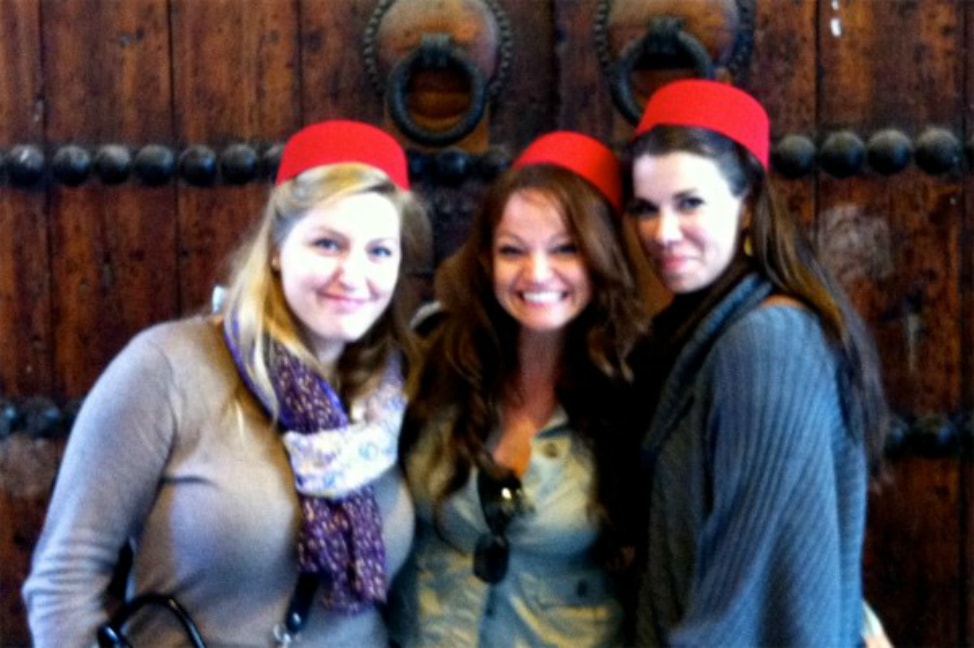 Fes is the second largest city in Morocco and, you guessed it, the famous fez hat was popularized here in the 17th century by Andalusian Arabs. The red color comes from local crimson berries which were once used to dye the hats.

There’s something sublimely satisfying about taking a photo of oneself wearing a fez in Fes. Don’t ask me why, but it’s a bucket list worthy endeavor that won’t break the bank and won’t freak your mom out. So add it to the list, ok? 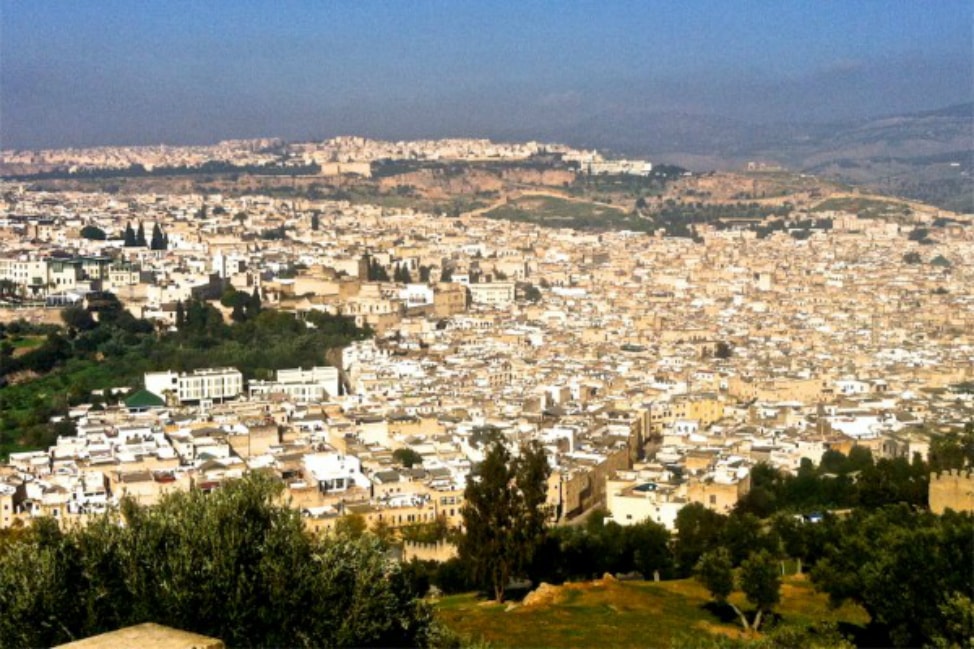 The massive, maze-like medina in Fes

Speaking of Fes (which to my great surprise, I really enjoyed) — its massive, walled medina is believed to be the world’s largest car-free urban area and the oldest quarter of its kind in the world. A medina is generally a distinct city section, most often found in North African towns. The medina typically has a wall and a labyrinth of narrow streets.

Our guide for the day warned us, “Do not lose sight of me if you ever want to find your way out of the medina.” Noted!

Other Moroccan towns with medinas include Chefchauoen, Essaouira, Meknes, Rabat, Tangier, Taza and Tetouan, but the one in Fes is the real star of the show. 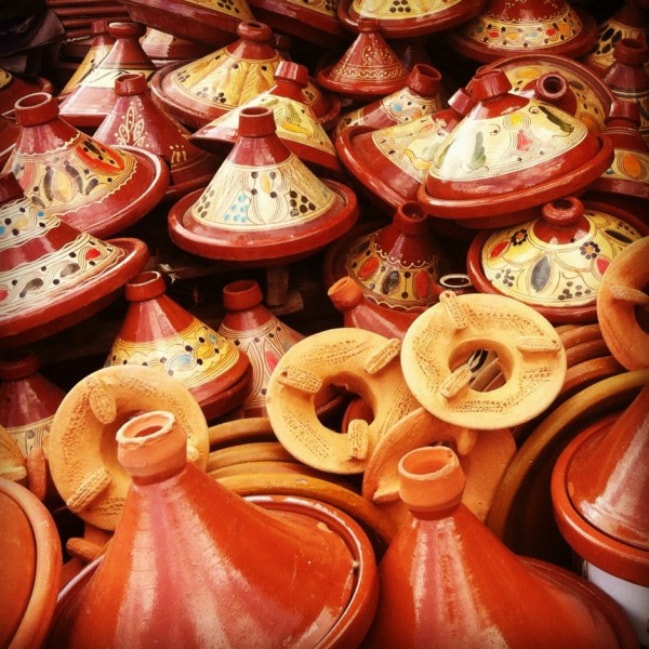 A stack of tagines in Meknes

Gah. At first taste, I loved tagine, a stewlike dish whose name comes from the type of pot in which it is cooked. After 15 days of tagine tagine tagine, I can safely say it’s going to be a long while before I order it again!

The tagine pot is usually made of clay and has two parts – a flat base with low sides and a conical top. The dish can be made with any variety of meat and an assortment of vegetables and spices, which truly can be delicious. But the thought of tagine right now, so soon after returning home, has me wincing. 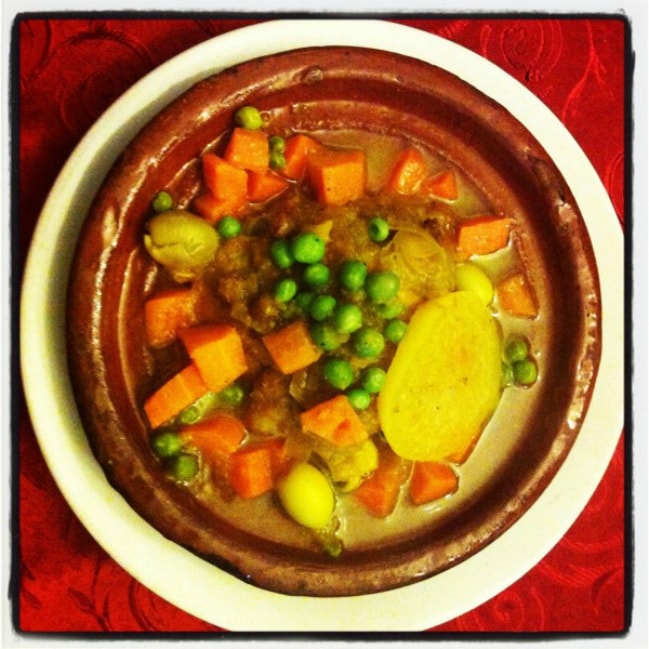 Morocco’s food might be tasty, but there’s very little variety from to place. Options at every restaurant were usually limited to tagine or couscous, and sometimes there was a pastila thrown in for a smidge of variety. Let’s just say I was glad for the occasional…

Soup! When you get tired of couscous and tagine, which you definitely will, check out harira, a very mild soup with a combination of flour, tomatoes, lentils, chickpeas, onions, rice, beaten eggs, herbs, spices and usually some sort of meat stock. It’s relatively bland, but with a sprinkle of salt and some bread for dipping, it’s a good alternative to the same old, same old. 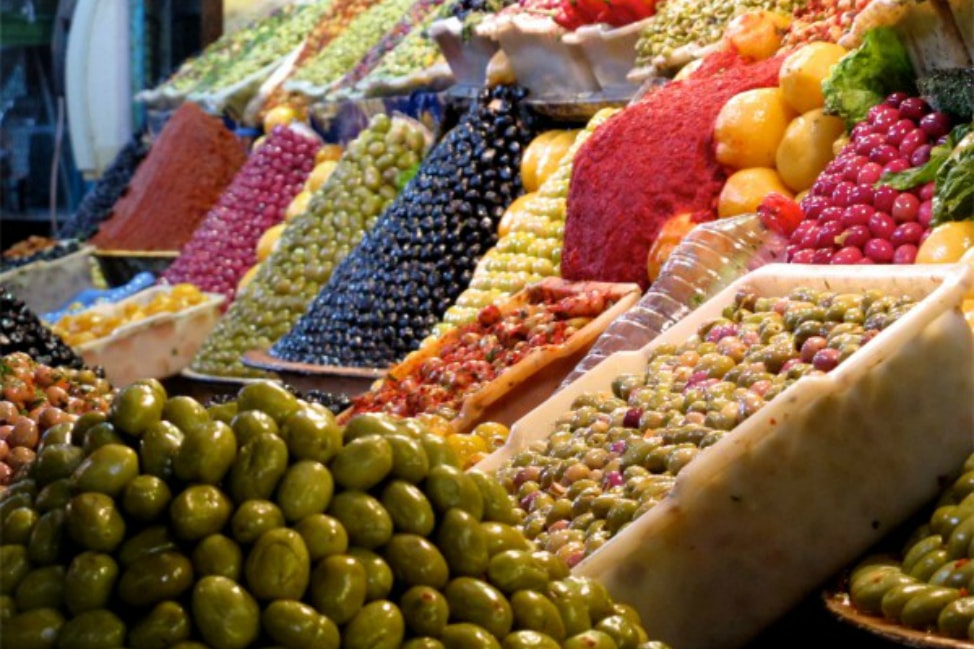 An olive stall at the souk in Meknes – yuck! 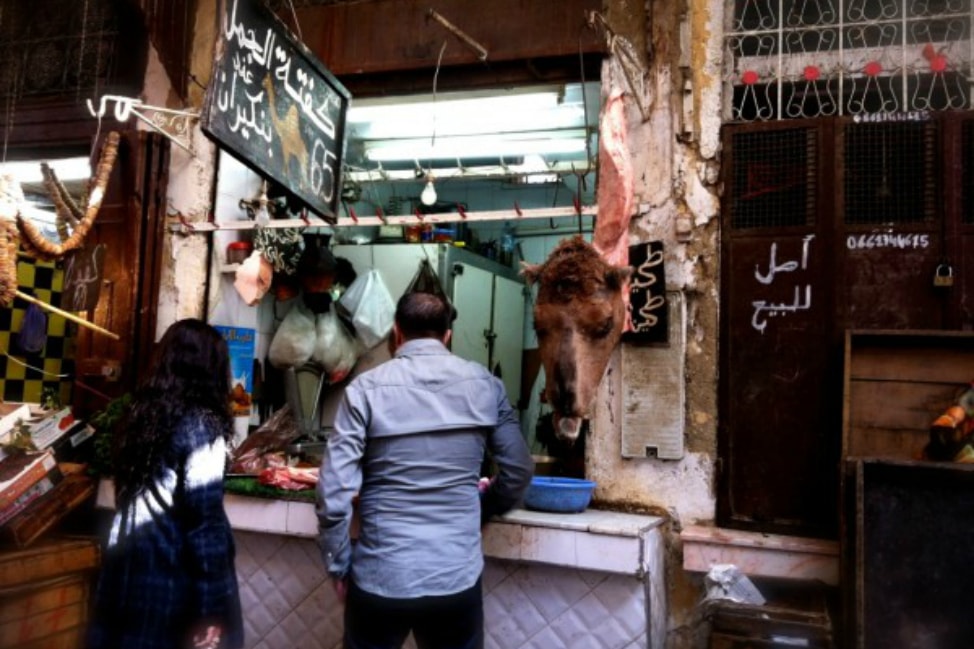 A camel head greets customers at the souk in Fes 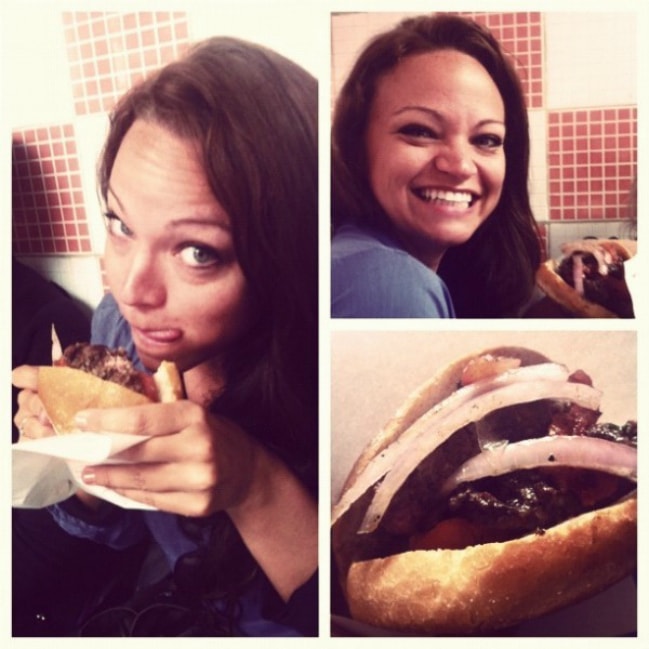 In Arab or Berber lands, a souk is an open-air marketplace where vendors offer wares in small stalls. Traditionally, souqs are grouped according to speciality, aka the gold souk, the spice souk, the leather souk, etc. The Fina’ area in Marrakech qualifies as a permanent souk and features snake charmers, monkey wranglers and entertainment to boot. 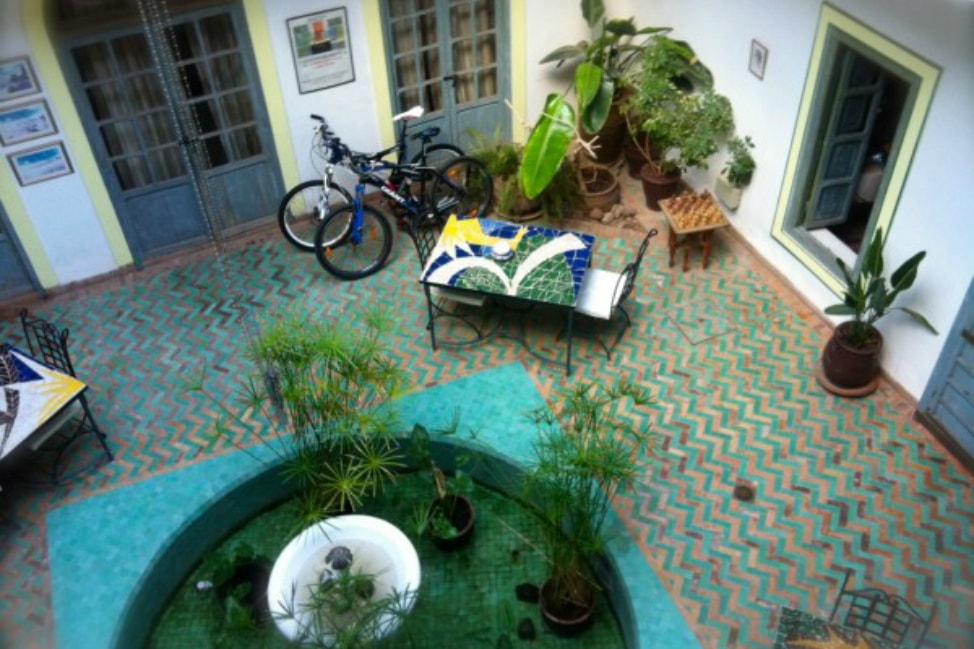 The courtyard of our riad in Marrakech 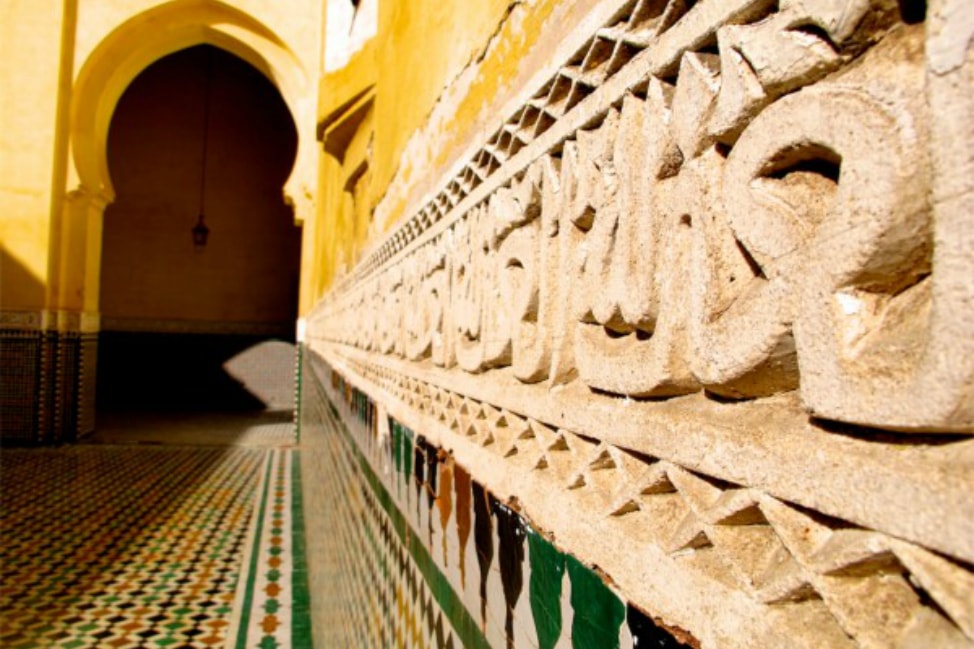 There are heaps of affordable and budget friendly hotels in Morocco, my favorite style being the traditional riad or dar, a house with an interior courtyard. Since riads focus their beauty on the inside and not the outside (in keeping with Islamic tradition) you never quite know what is behind the nondescript doors you pass in the medina.

Dars & riads are typically plain, simple and undecorated on the exteriors, with thick, high walls to protect inhabitants from crime, critters and prying eyes. Many times, we came upon our accommodations and never would’ve expected to find such luxury within, but we did. 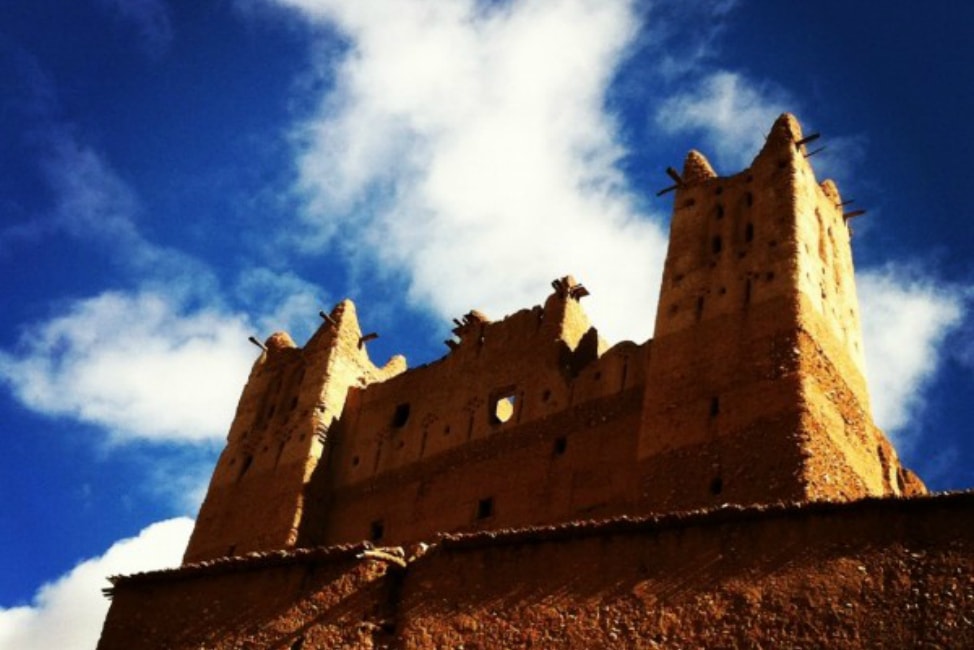 If the kasbah is rockin’, don’t come a knockin’

Thanks to the Clash, we’ve been rocking the proverbial casbah almost as long as I’ve been alive… but what exactly have we been rocking all these years?

Since everyone’s been waiting for the answer with bated breath, I decided to get to the bottom of things on my trip. Kasbahs are the chateaus or small castles of Morocco, often built high up on hills as fortresses by wealthy families. So, now you know and we can all sleep better at night. 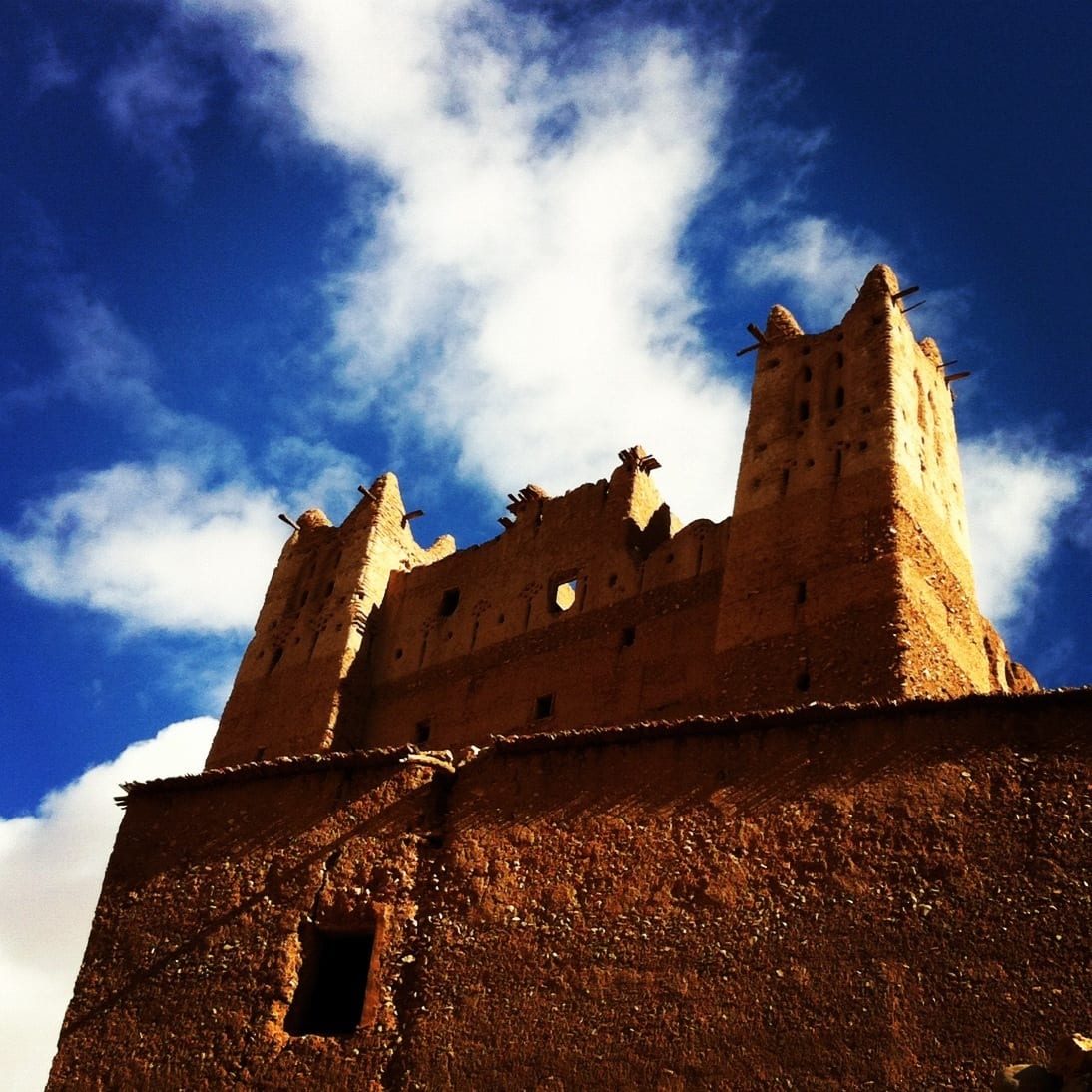 There are hundreds and hundreds of kasbahs in Morocco, some in ruins and some restored to former glory as hotels and restaurants. One of the most famous kasbahs is in Ait Benhaddou on the ancient caravan route between the Sahara and Marrakech, and while only 10 families remain in this UNESCO protected site, it has found new life in a dozen films including Gladiator, Kingdom of Heaven and The Mummy.

Now that you’ve learned all about riads, dars, kasbahs, medinas, the fez, souqs, jalabas, hariras and tagines, you’re ready to make like a nomadic Berber man or woman and visit Morocco yourself.

34 thoughts on “Things To Know Before You Go to Morocco”