Y’all! The Southern Sisters Road Trip continues in Nashville, Tennessee! Rachel and I visited a few years ago to speak at the KEEN conference, but we barely had time to see anything outside the hotel, and that’s a crying shame because Music City is one of the most fun and fabulous places in the USA. 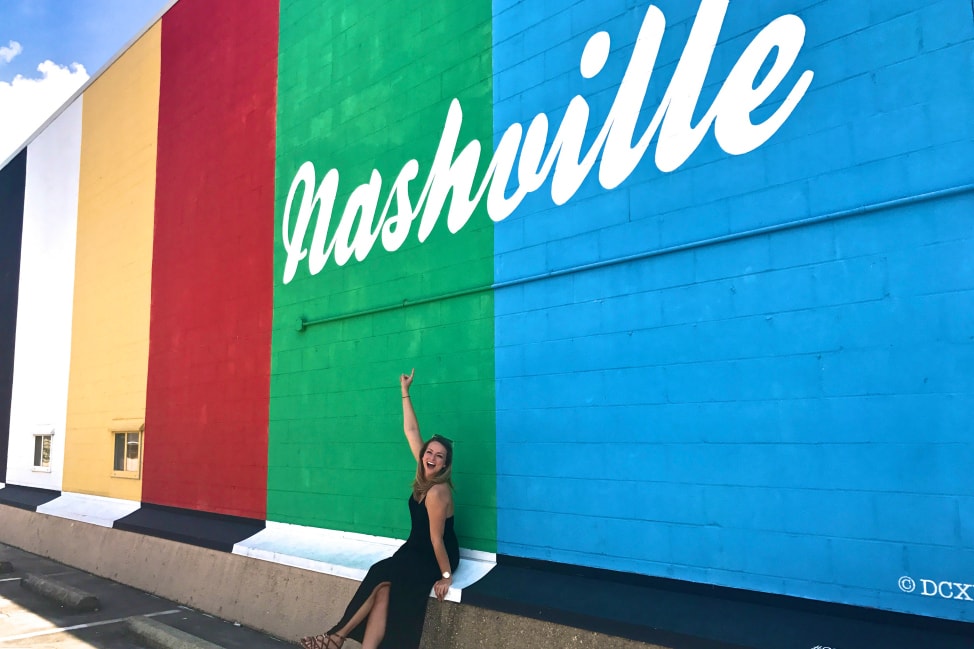 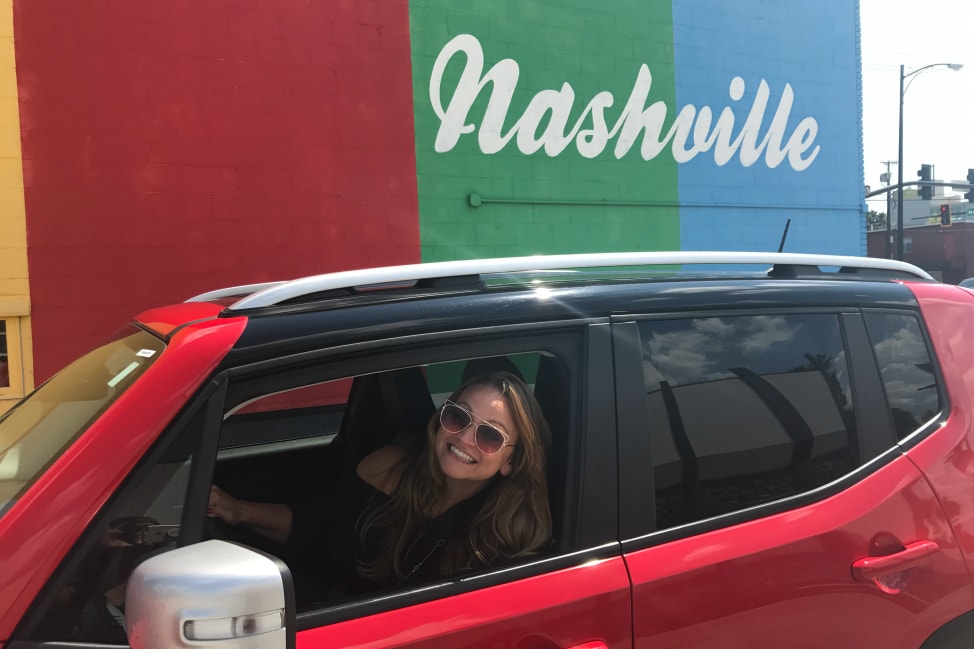 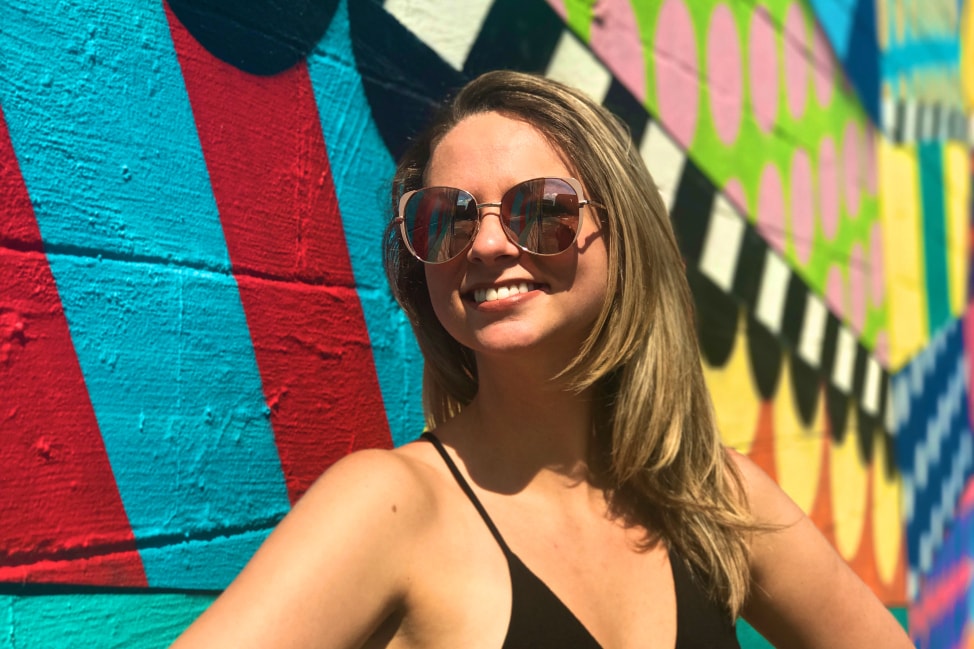 On our latest road trip, we had one main priority: cramming in as much must-see, must-do and must-eat Southern goodness as we could in this sweet town. Oh, and hanging out with Kristin and Scott. And seeing the total solar eclipse, which would pass over Nashville about 24 hours after our arrival. 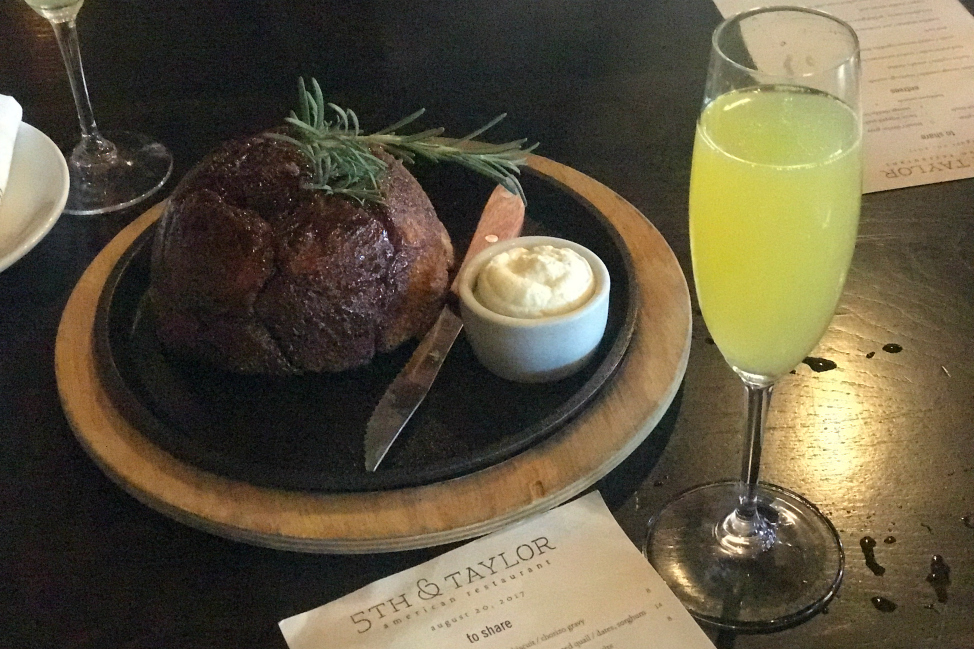 Within the first few hours, we’d snapped photos at some of Nashville’s most famous murals, reunited with the Camels and Chocolate crew for a biscuit-and-grits brunch at 5th and Taylor, checked into our hotel and had enormous – truly, gargantuan – blowouts that would make Dolly Parton proud. 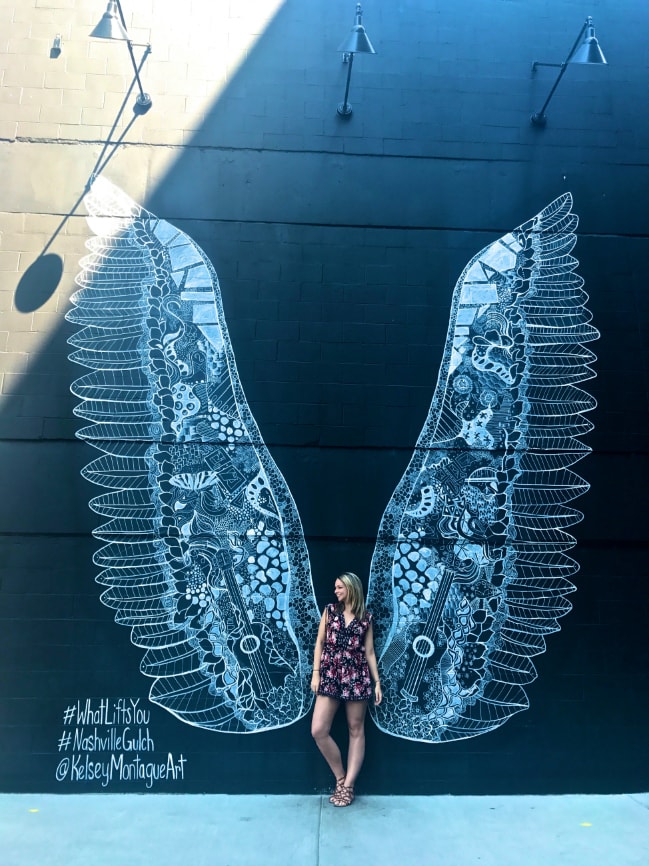 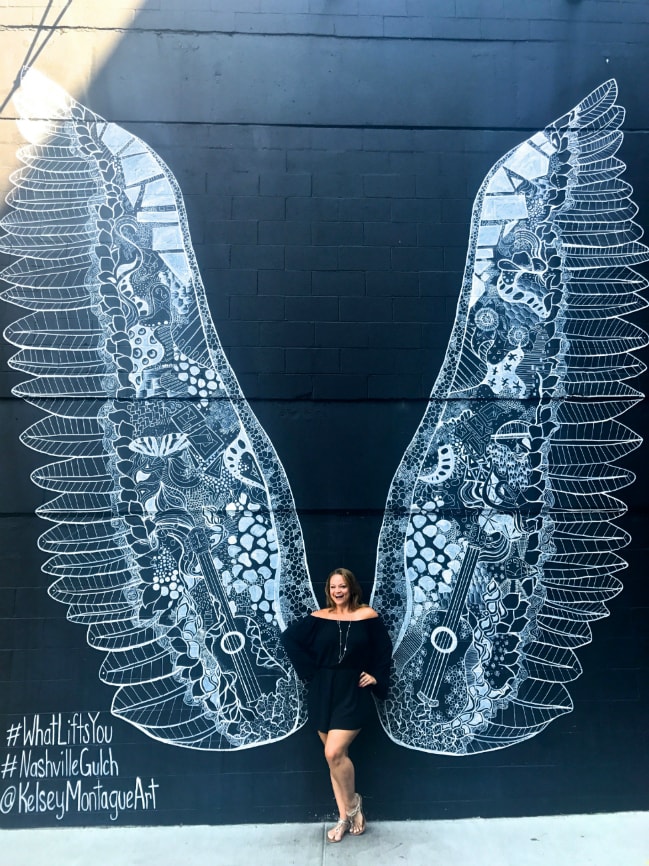 But it wouldn’t be a trip to the Music City without some good ole country jams, and the best place to find them is of course, The Grand Ole Opry! 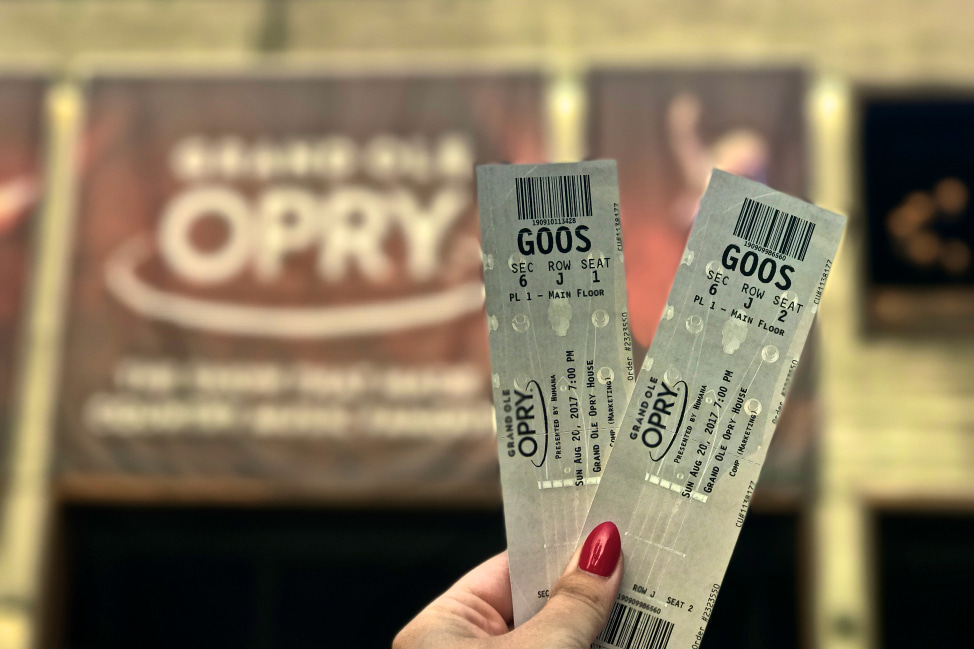 Um, here’s the crazy thing though. Rae and I don’t actually listen to country music, so we didn’t have the first clue what to expect from a visit to The Opry.

You already know that we are card-carrying Southern girls. We grew up in a rural town where camouflage print, shotguns and 4WD trucks were standard issue. Everyone back home listened to country music – except us. Our Dad even toured in a world-famous Southern Rock band. We spent as much time in honky-tonks and dive bars as we did in church. With our musical family roots and connections, we were solid candidates to become musicians ourselves. (And here we are – travel writing and making YouTube videos!) When Kristin talks to us about the CMA awards, or when she and Alex discuss the latest episode of Nashville, we just shrug.

We have learned to live with the polite, Southern version of stinkeye, “Oh, bless your heart,” when we tell folks we’ve never seen Garth Brooks live and don’t have any Bro Country on our Spotify playlists. 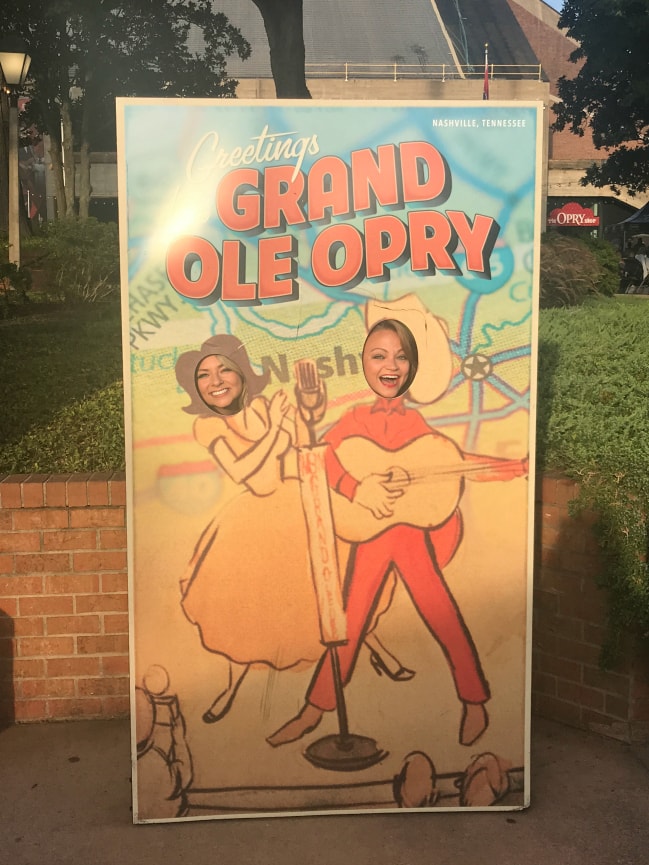 But wait! Don’t give up on us yet, country music fans. We knew there was only one place to go to get to the heart of this musical genre, and we were going to give it the ole college try. It’s tough to do when you’re only in town for one night, but The Opry has multiple shows per week, varying based on time of year. We happened to be there for one of the only Sunday shows they’ve ever had, a double-header to celebrate the eclipse with Darius Rucker, Wynonna, Little Big Town and Charles Esten. We already knew of all those folks, so we were off to a great start! 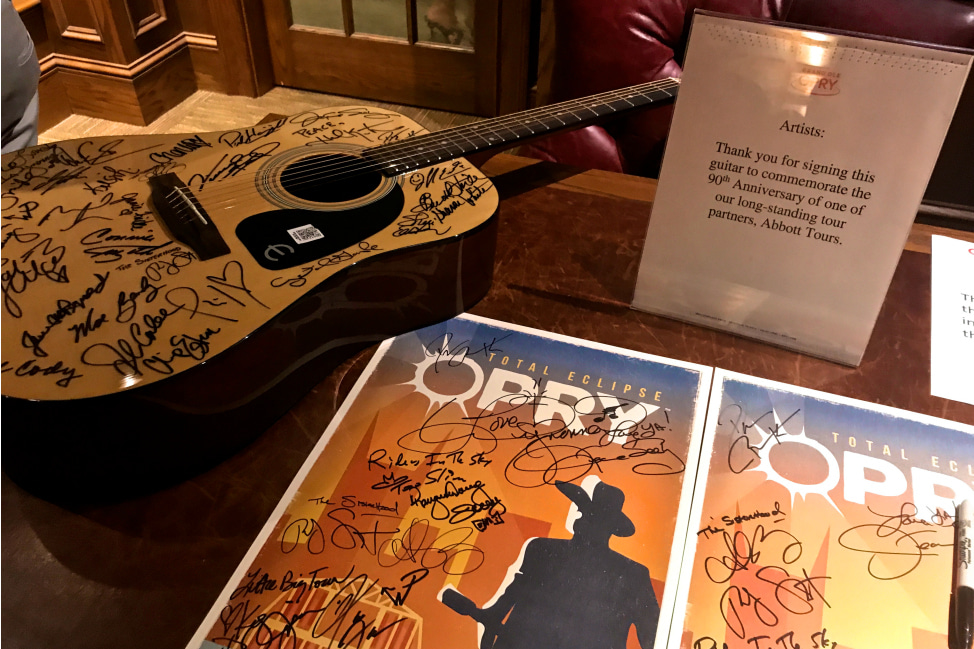 For many of the staggering 1 million visitors per year, a visit to The Opry is a pilgrimage to the country music’s very foundations. Not only is The Opry known as “The Show that Made Country Music Famous,” it’s also the longest-running radio broadcast in US history. It broadcasts live on 650 WSM and Sirius XM Satellite Radio, so you don’t even have to be there in person to tune in. 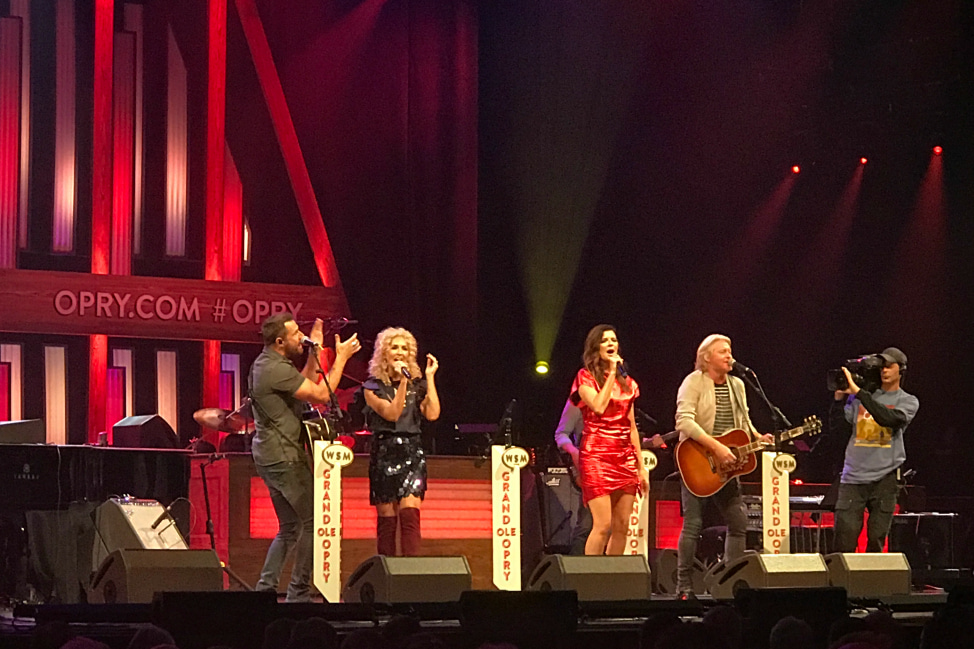 As each artist is introduced, they approach the wooden circle at the center of the stage with great reverence. The Circle is significant for two reasons. First, it was transported from the original Opry location at the Ryman Auditorium way back in 1974, and second, everyone who’s anyone in the country music world has stood in that very spot. It’s an honor and a privilege, and something every single singer dreamed of as a kid.

The Sisterhood performed for the first time the night we were there and it was a sweet moment to see the power of 90 years of history sink in when they stepped into The Circle. (Watch Darius Rucker’s invitation in 2010 to get an idea of just how big a deal it is!) 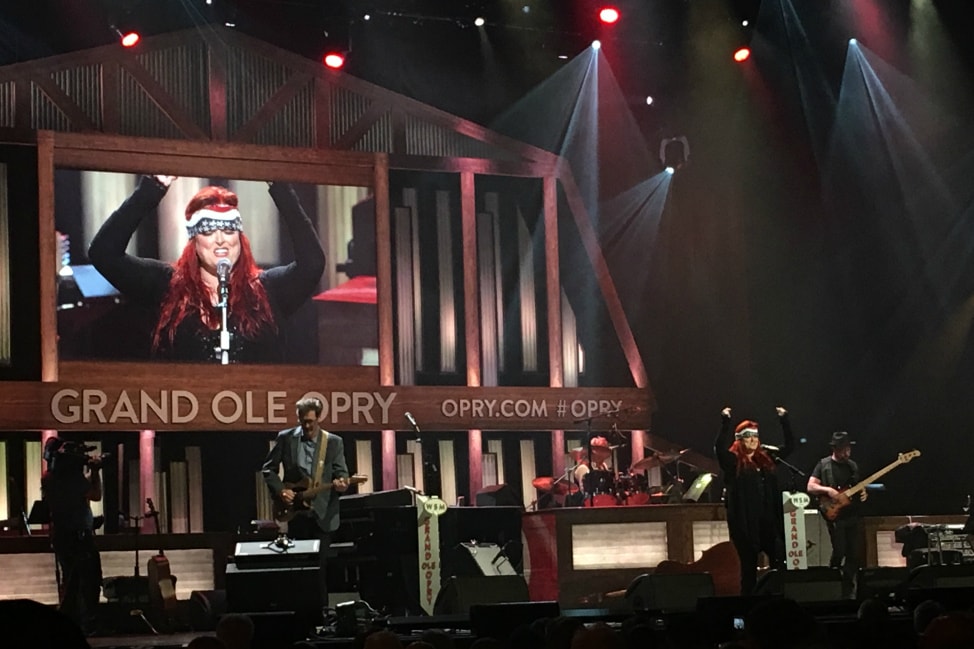 Imagine being a part of something like that! I get goosebumps just thinking about it. Now I want to stand on The Circle and join the country music family.

Is it too late for Rae and I to start our band? 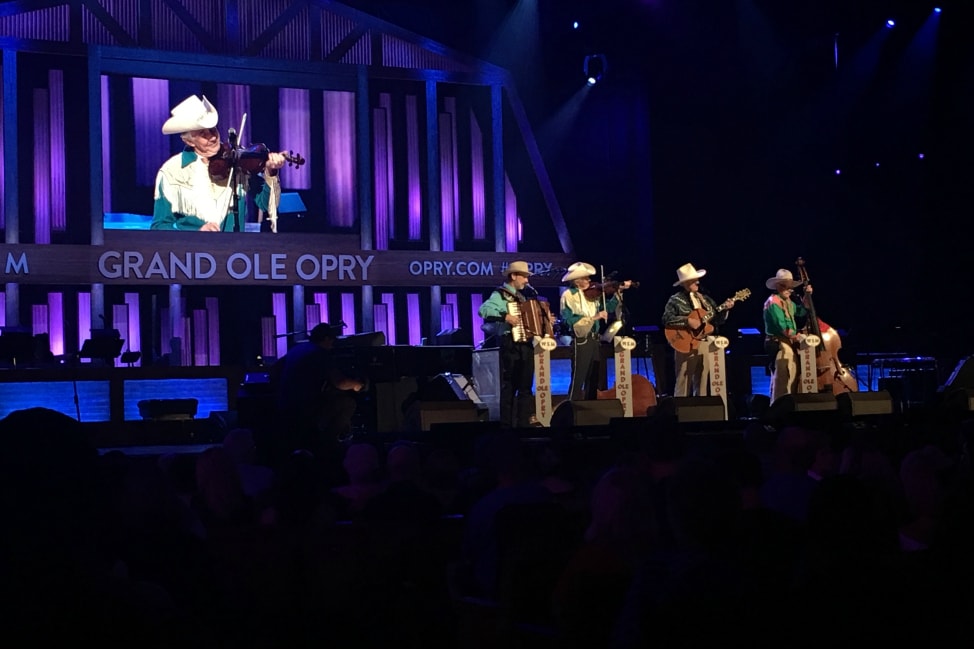 I can’t stress this enough – you do not have to be a country music fan AT ALL to appreciate this experience. No matter your style, sassy like Wynonna, chill like Darius or adorable like Riders In The Sky with their bluegrass jams and grandpa jokes, you’ll almost certainly find something that strikes a chord throughout the course of a show. And since each artist plays a few songs, you really get a taste for country music from past to present. 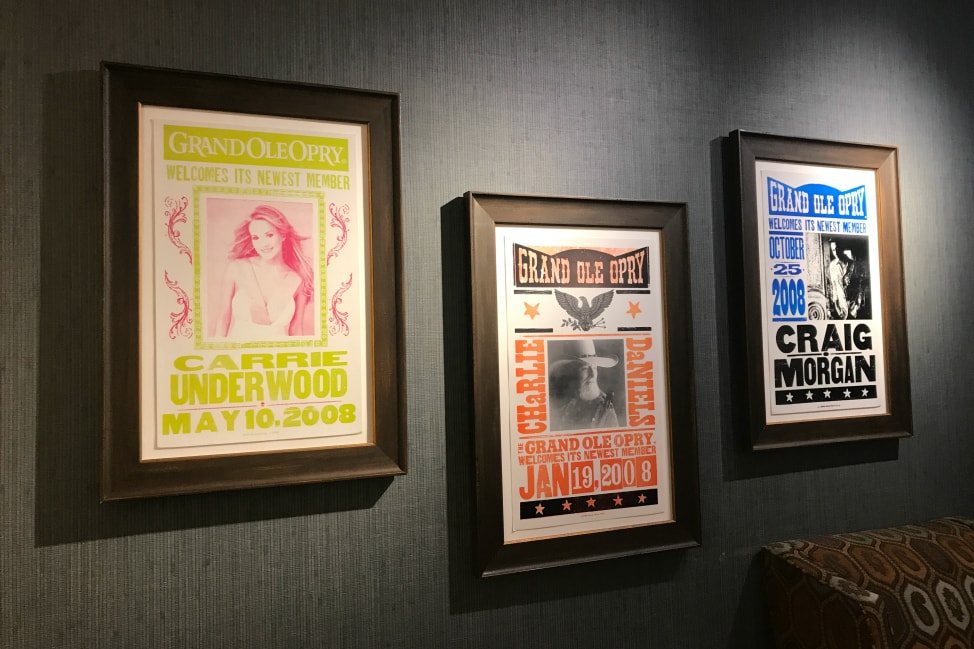 I knew more songs than I thought I would. The whole audience sang along with hits like “Wagon Wheel” and cracked up at legendary Jeannie Seely, a legend who’s been performing at The Opry for 50 years. I can’t think of the last time I had such a sweet, delightful, pleasant, easy experience.

It reminded me of how I felt as a kid at Disney World. Everything was happy. 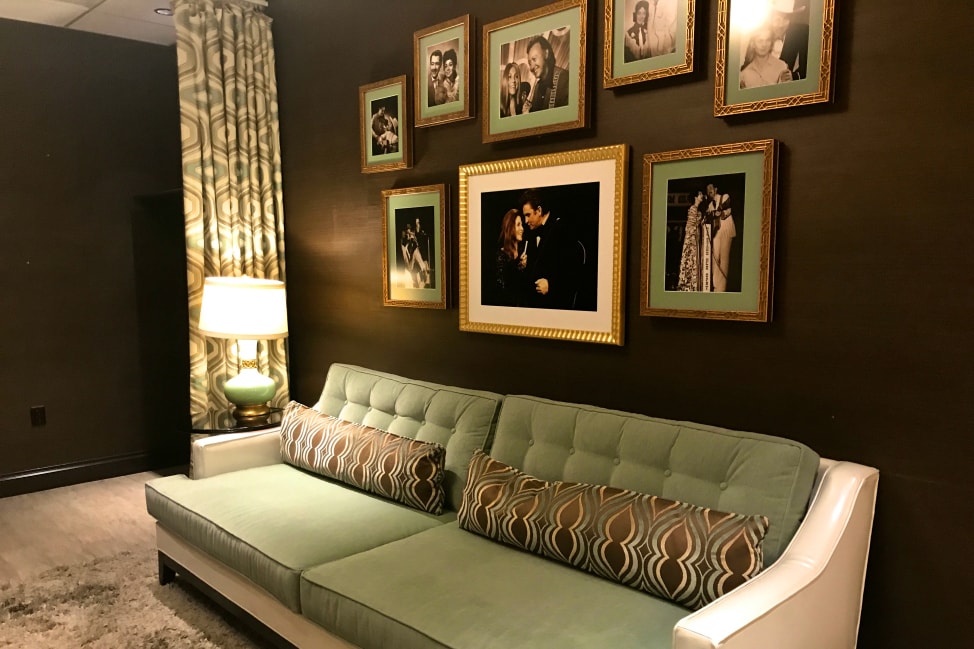 After the show, a guide scooped us up for a VIP tour of the dressing rooms and backstage area. This is a must-do! We learned about the mailboxes each member has for fan mail and just how special it is to be invited to be a part of The Opry cast. You also learn the story behind each dressing room, uniquely themed and covered in photos of artists that have performed over the years.

As our tour progressed, Darius and Charles and the gaggle from Little Big Town were all just wandering around, cutting up with each other and taking photos with…us?!? I was struck by the no-frills community and how down-to-earth all the artists were.

Is a chat with Darius about the solar eclipse included in the VIP tour? It’s not – but that’s what happened to us! 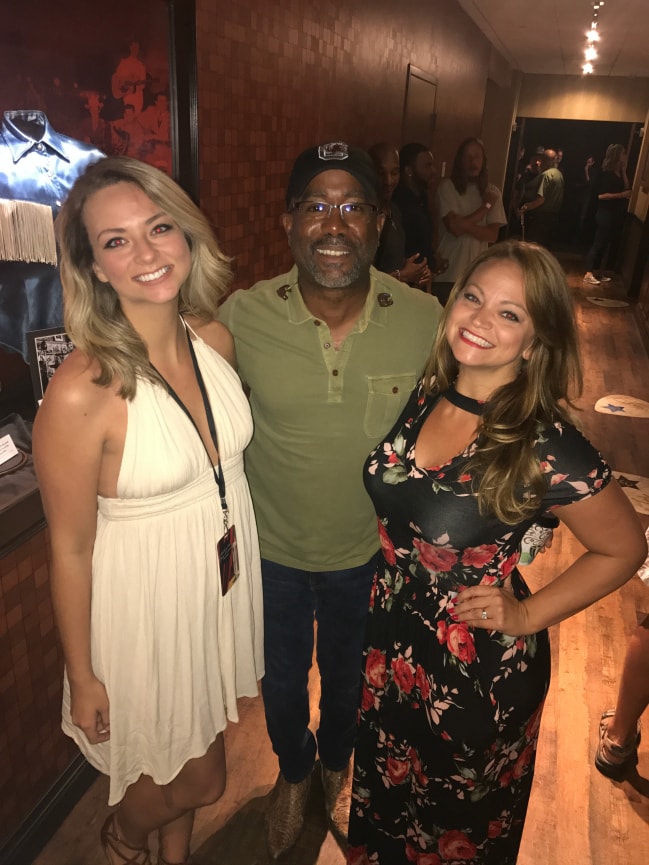 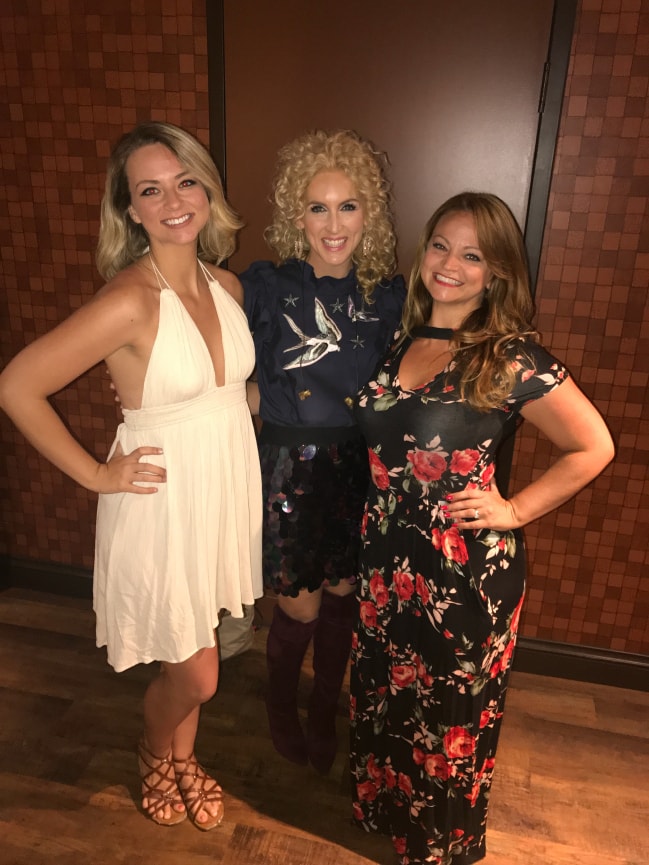 Things to Know about The Grand Ole Opry 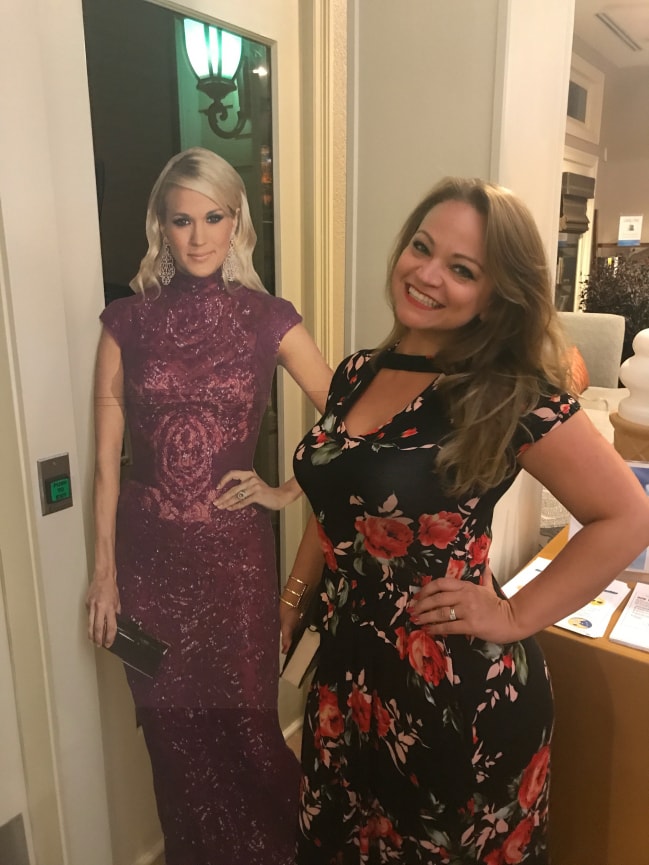 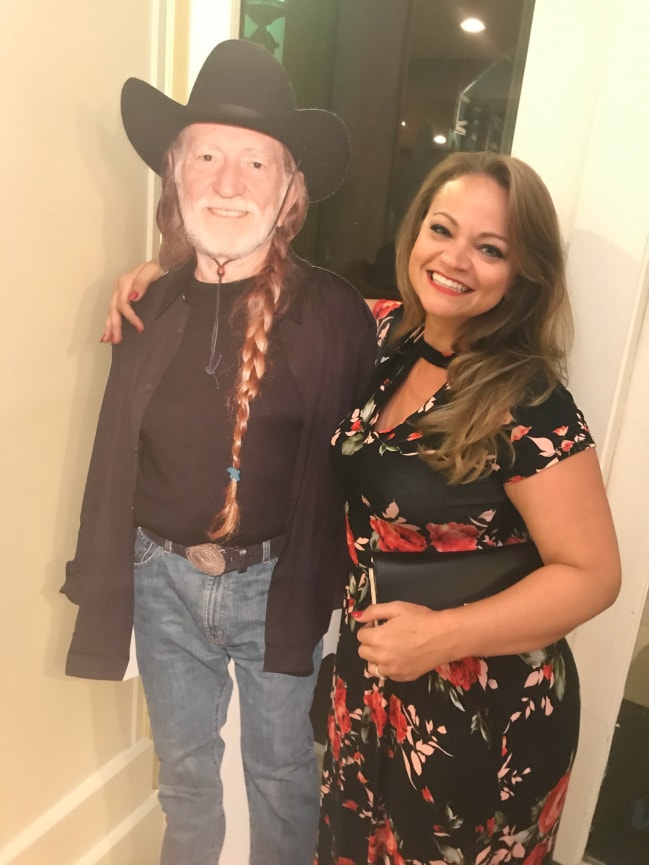 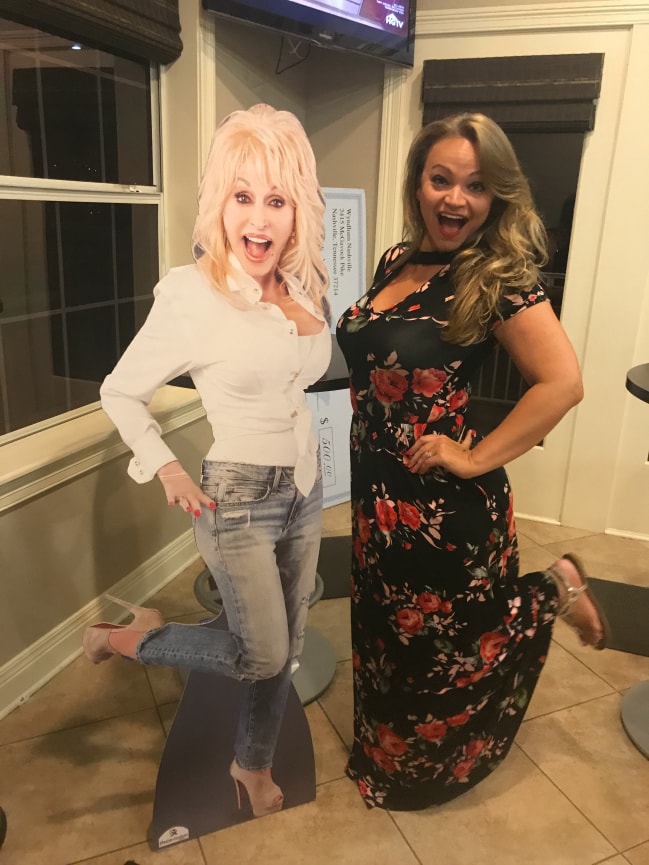 This one visit to The Grand Ole Opry changed us from non-country music fans to immediately getting in the car and listening to “Wagon Wheel” 57 times in a row. And yes, we jammed out to Riders in the Sky while driving around the Great Smoky Mountains.

Whether you are wild for country music or wouldn’t know the difference between a Twain and a Pickler, a night at The Opry is an experience you shouldn’t miss on a visit to Nashville. It’s fun, it’s wholesome and the whole vibe is just so stinkin’ cheerful. It’s what you want the South to be like all the time.

So are you a huge country music fan or like, what’s a Wynonna? Who would you most want to see perform at The Opry?

This post brought to you in partnership with The Grand Ole Opry. All opinions and literally impossible aspirations for country superstardom are my own. 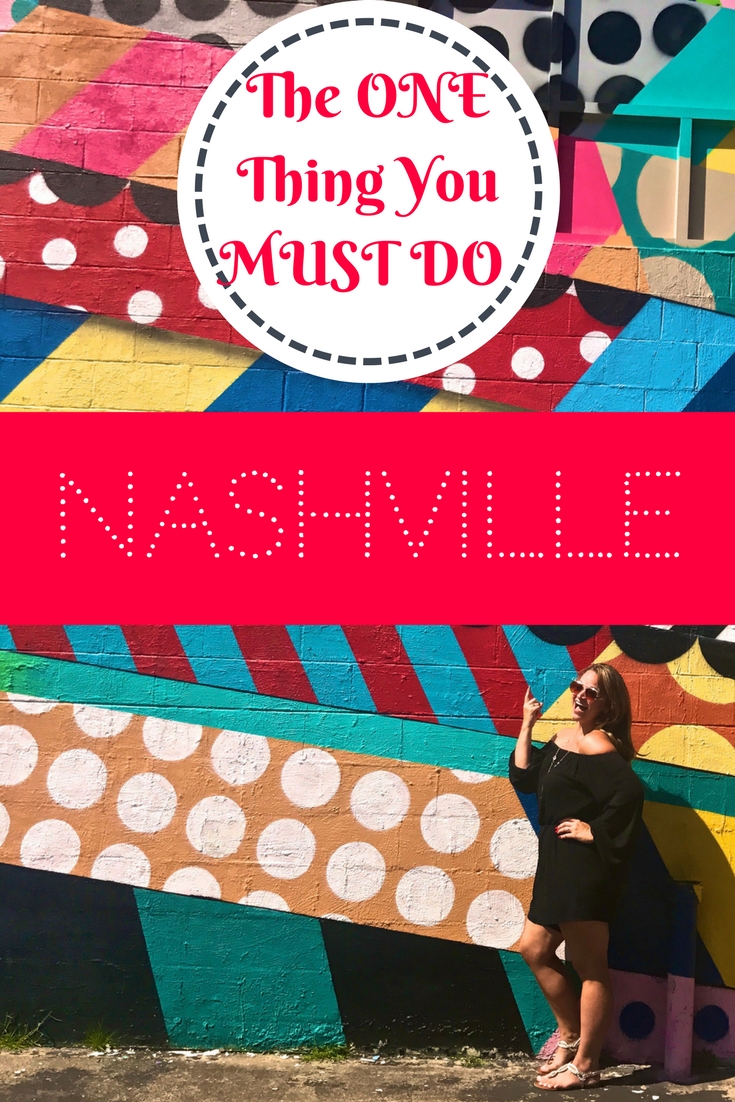 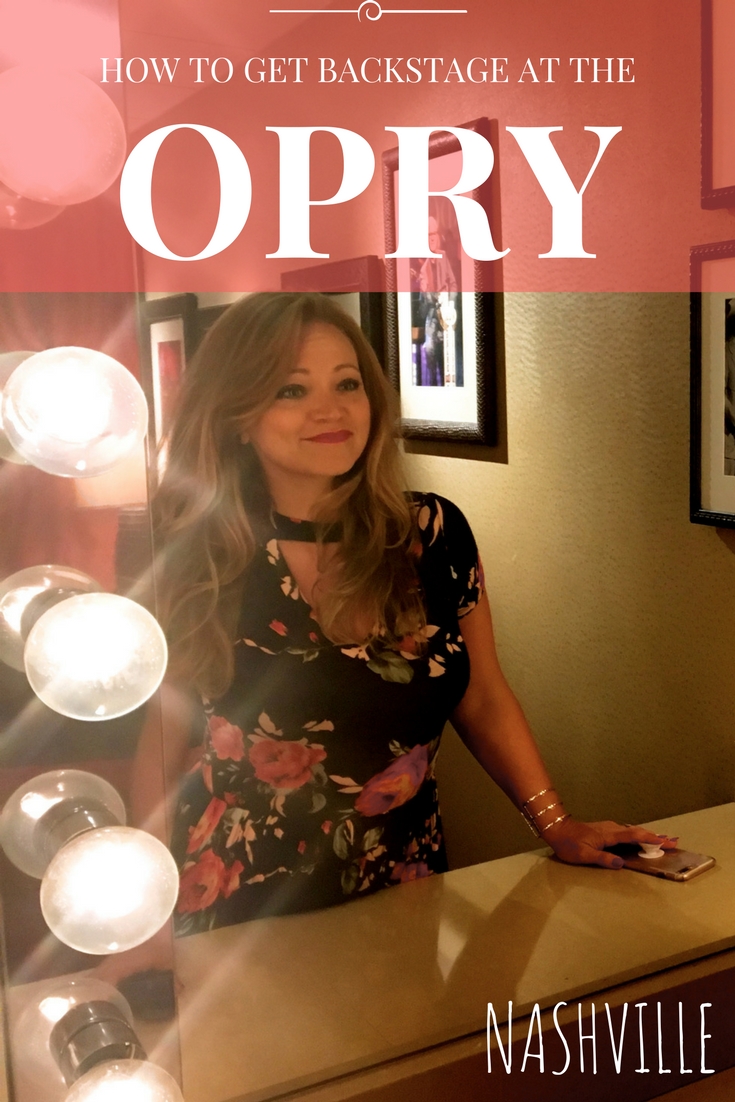 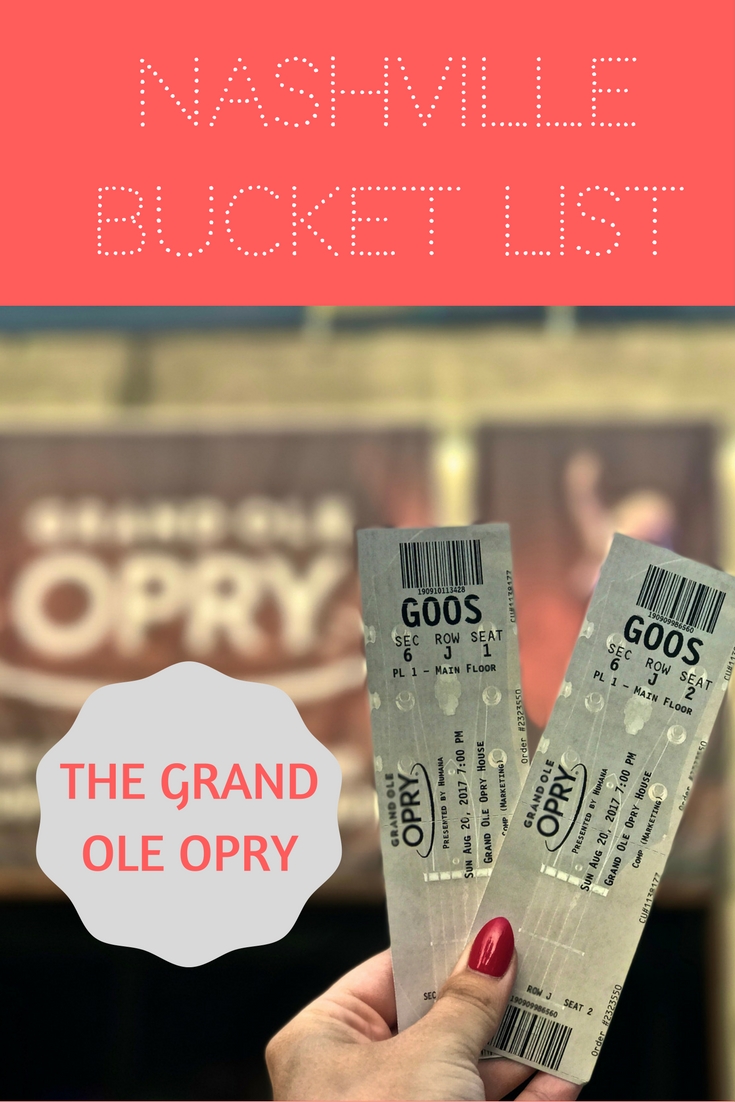