My name is Angie and I’m a shark-o-holic. 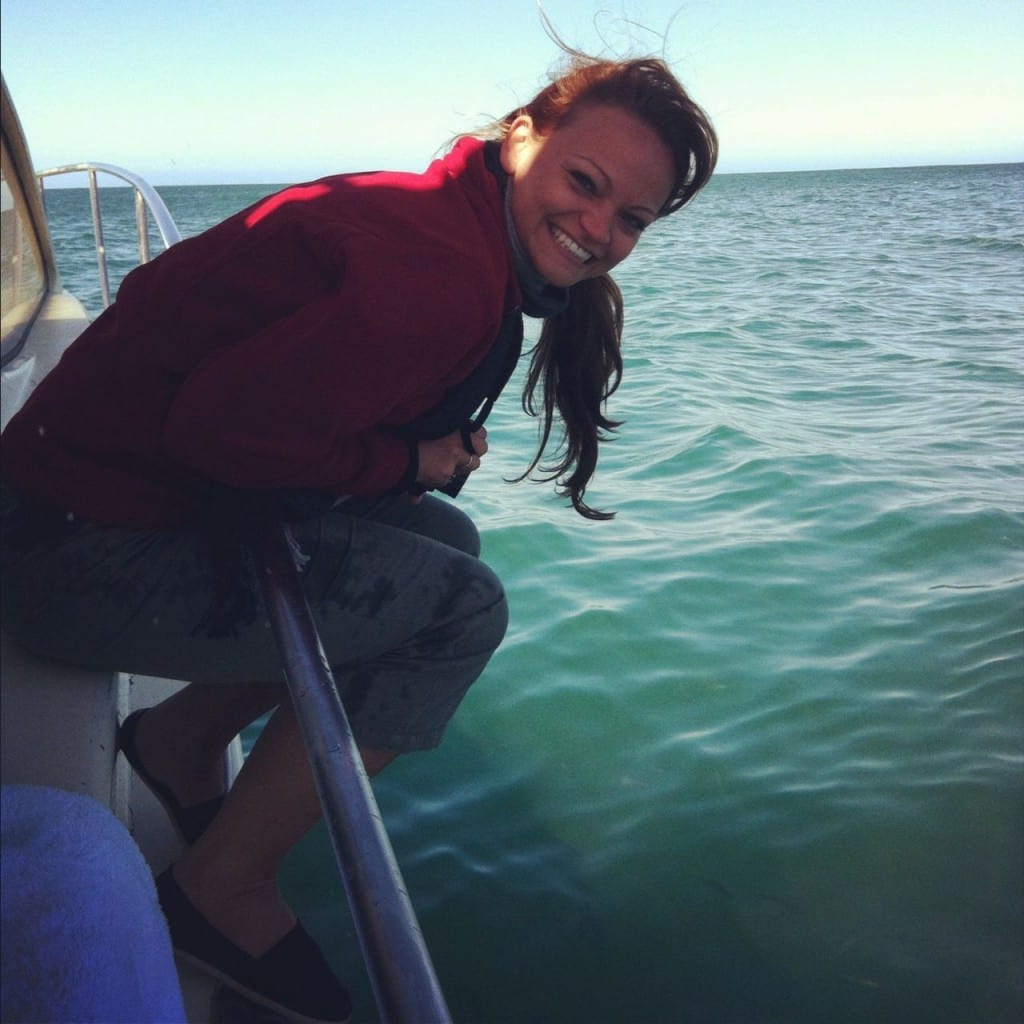 Hanging over the edge, awaiting the Great Whites

So you like puppies, huh?
I hope it doesn’t speak too poorly about my personality that I am so strongly attached to the apex predators of the sea that I’d rather spend my birthday with them than at a swanky party in Manhattan. I also hope it doesn’t prophesy any future encounters more intense than the ones I’ve had to date…. 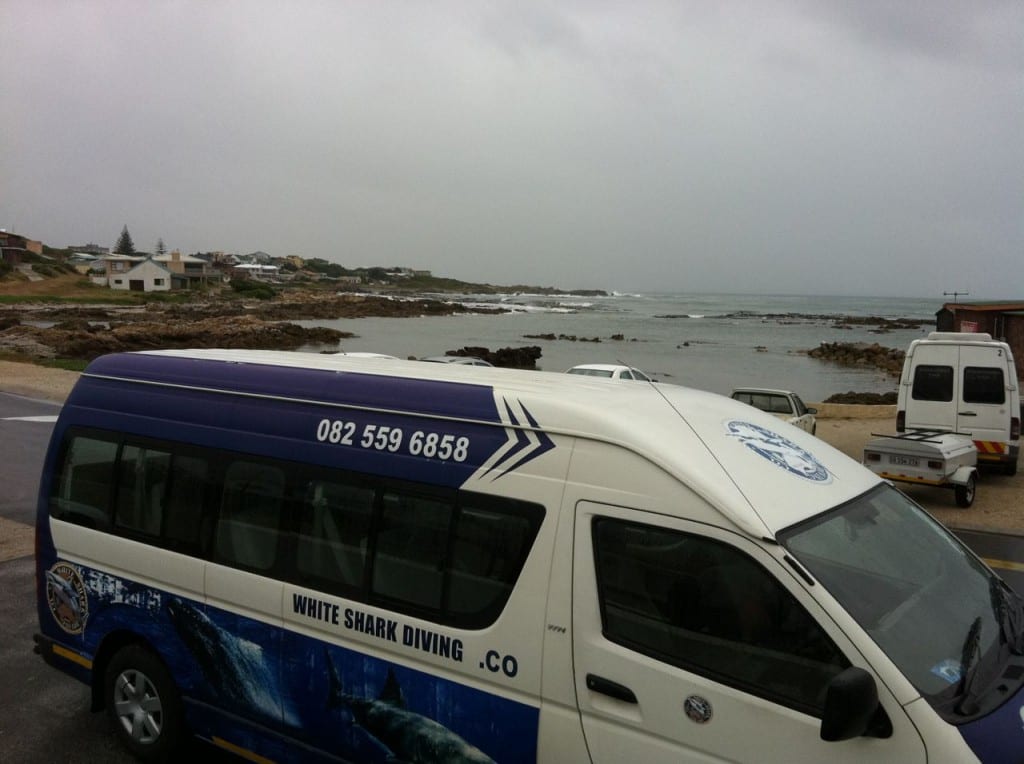 The ride to Shark Alley, Step 1

In South Africa, I hooked up with the White Shark Diving Co. in Gansbaai, the Great White Shark capital of the world, for my adventure. They provide round trip transportation from Cape Town and any hotel or guesthouse along the way as well as breakfast on arrival and snacks post-dive, so it’s a solid deal at about 1700 ZAR.

And it’s a really early morning. I was the first pickup that day, so at 4 a.m. I was collected from Greenways Hotel for the ride down to Gansbaii. It took a couple of hours including all the pickups but as you can imagine, I wasn’t sleepy at all. (Side note – I saw two porcupines crossing the street in Cape Town on the way down. I think there’s a joke in there, something about sharks, porcupines & whales walking into a bar, but I’m awful with punch lines…) 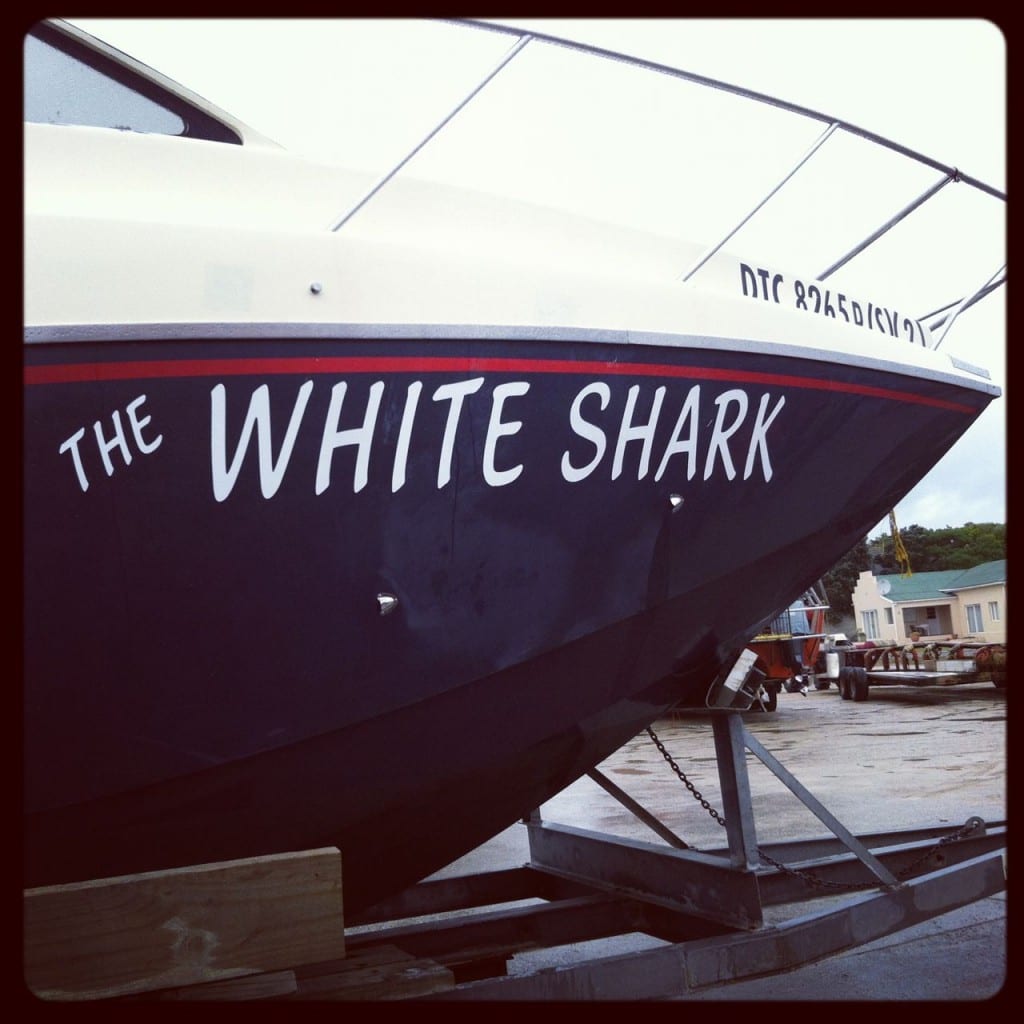 The ride to Shark Alley, Part 2

After breakfast and a short safety briefing & video, the whole group boarded the boat and cruised about 15 minutes to the great white shark cage diving zone to put on wetsuits, hoodies, booties and masks. Passengers ranged from the terrified, legs-crossed-because-they-were-about-to-pee-their-pants folks to calm, cool and collected future shark TV hosts like me — and everything in between.

When our experienced guides asked who wanted to go first, who do you think wet-suited up in record time? 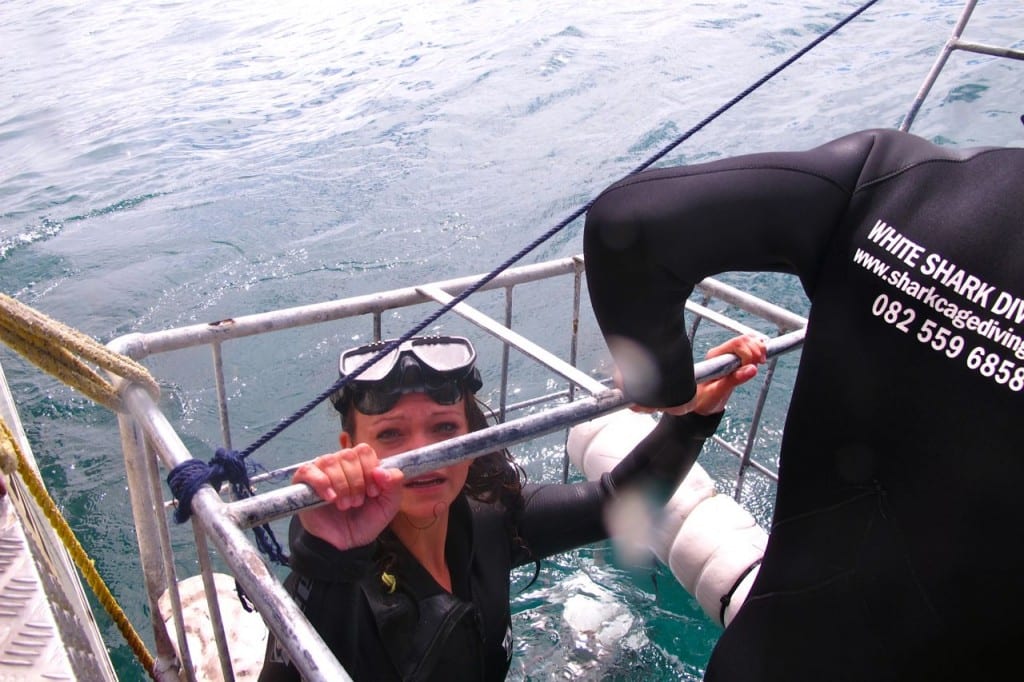 Old Sharkweek herself, of course!

And there I was, in the cage, within sight of infamous Shark Alley and Dyer Island, with my Canon G12 and underwater housing smacking me in the mask with every swell, holding my breath and waiting for the moment. 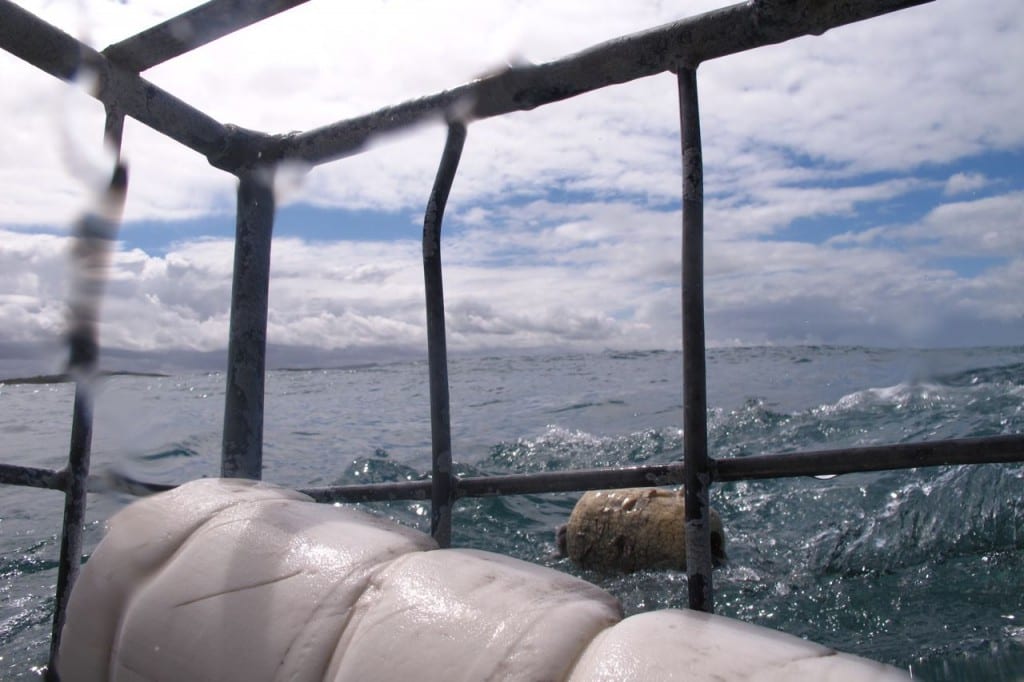 The view from inside the cage, waiting for visitors

My main concern about the whole adventure was not a toothy mega-shark biting through the cage and relieving me of a limb – come on, that’s just crazy — it was that I might get nauseous in Gansbaii’s choppy waters. Fortunately, I spent so much time in the cage that I didn’t really have time to get seasick. Others on my trip weren’t so lucky, particularly the ones who were too scared to get in the cage. They spent most of the morning hanging over the side of the boat, reliving breakfast.

I was also a little concerned about the water temperature – it’s South Africa, not South Florida, after all. What if I turned blue before I had my fill of sharks?! That would be so disappointing! Luckily, between the warm November sun and my adrenaline, I managed to stick it in the cage for two very lengthy encounters, only getting cold toward the end of my second turn. 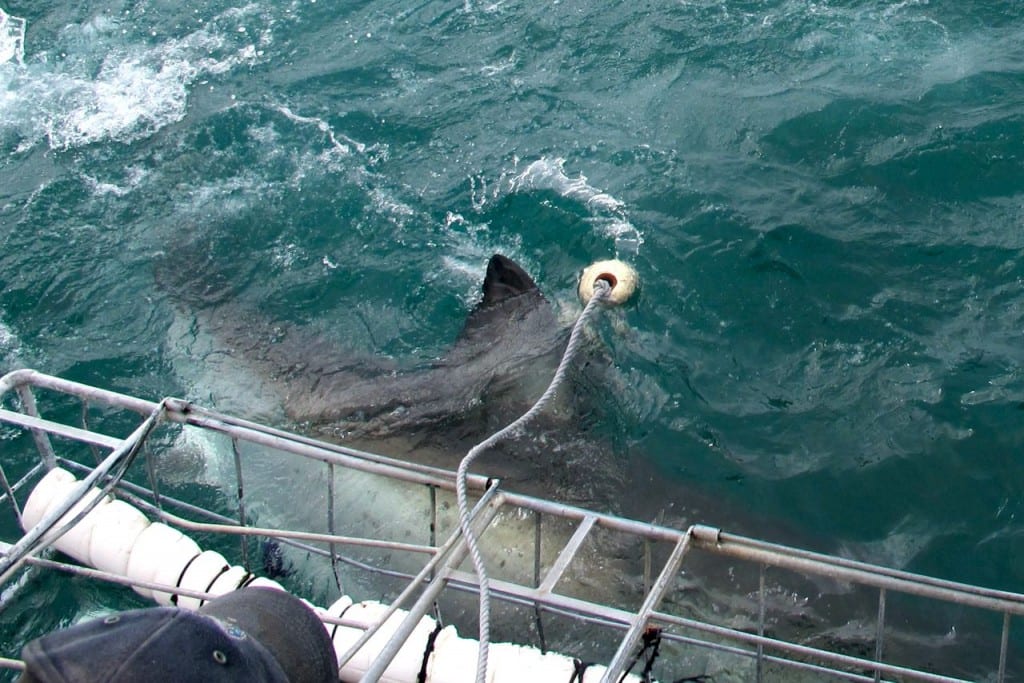 The guides tossed out a cocktail of bloody guts and some hunks of fish on a rope as those of us in the 4-5 man cage patiently awaited the first fin to pierce the surface.

Once Jaws No. 1 swam up to the cage, I was beside myself, fist-pumping and cheering.

You can hear some of my elation on the video taken by the White Shark Diving Co.’s onboard videographer.

Since Great Whites are surface feeders, even the folks on the boat enjoy a good show and might get wet when the sharks get to thrashing. At anywhere from about 9-17 feet long, there’s a whole lot of splashing! 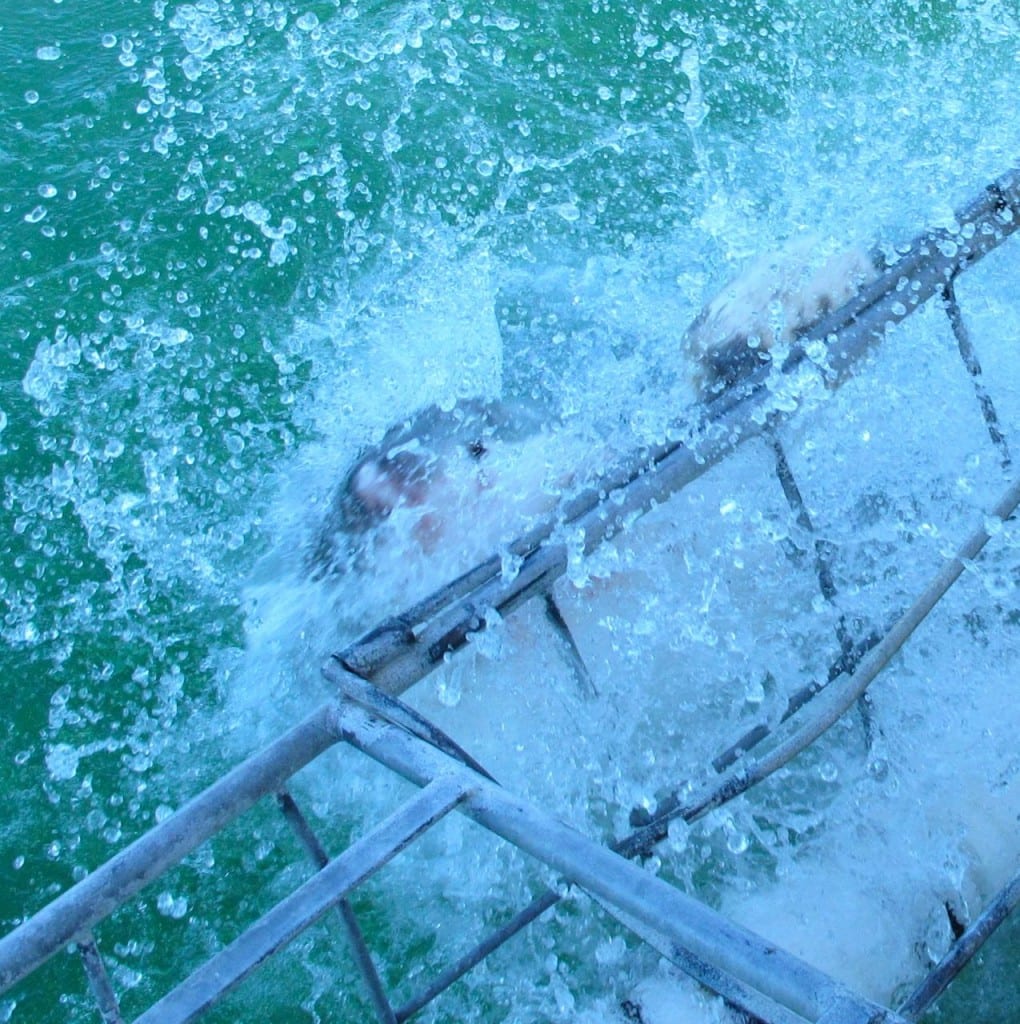 Splish, splash, this is not an innocuous bath

I had to stop myself from reaching for the cuddly critters — ok, maybe cuddly is the wrong word — as they swam by. Why do their razor sharp teeth and thousands of pounds of pressure jaws not terrify me? Part of my brain must be broken. 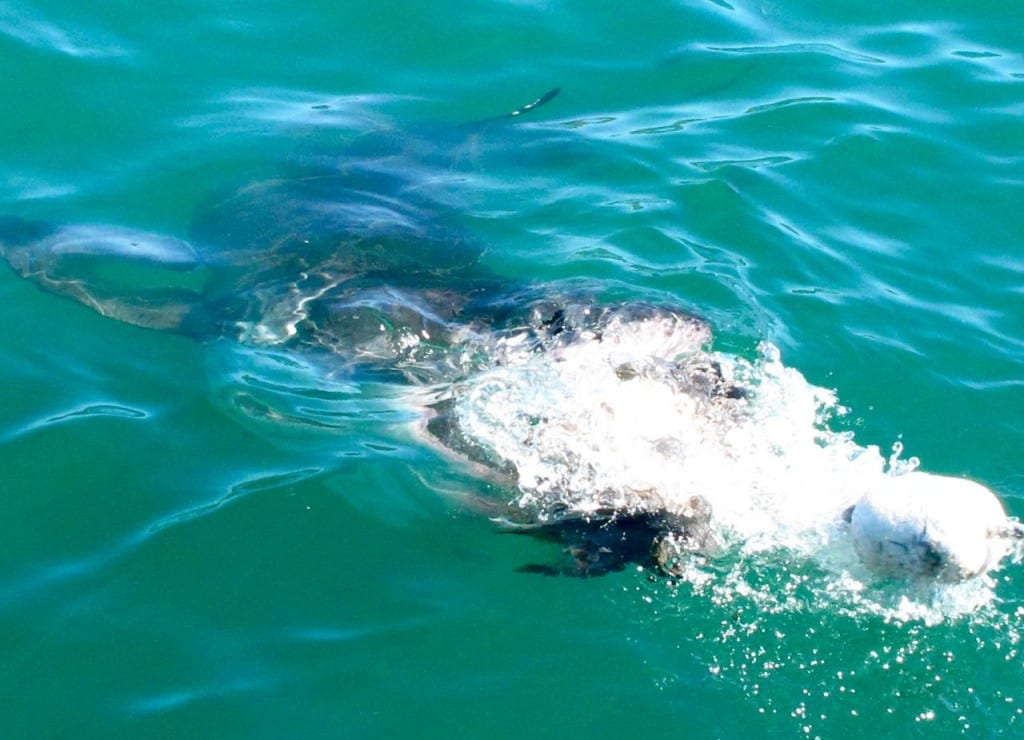 Anytime a shark would swim near the cage, the guides on deck would shout, “Dive, dive!” and we’d inhale and pop down to see if we could spot anything. I confess this part was a little tricky for me. At 5’3″, I was a smidge too short to tuck my feet under the bar at the bottom of the cage like everyone else. The others stood comfortably secured to the bottom, with their heads above water, but if I tucked my feet, I’d be underwater and unable to breathe (they didn’t provide snorkels). Next time, I might bring a regulator! 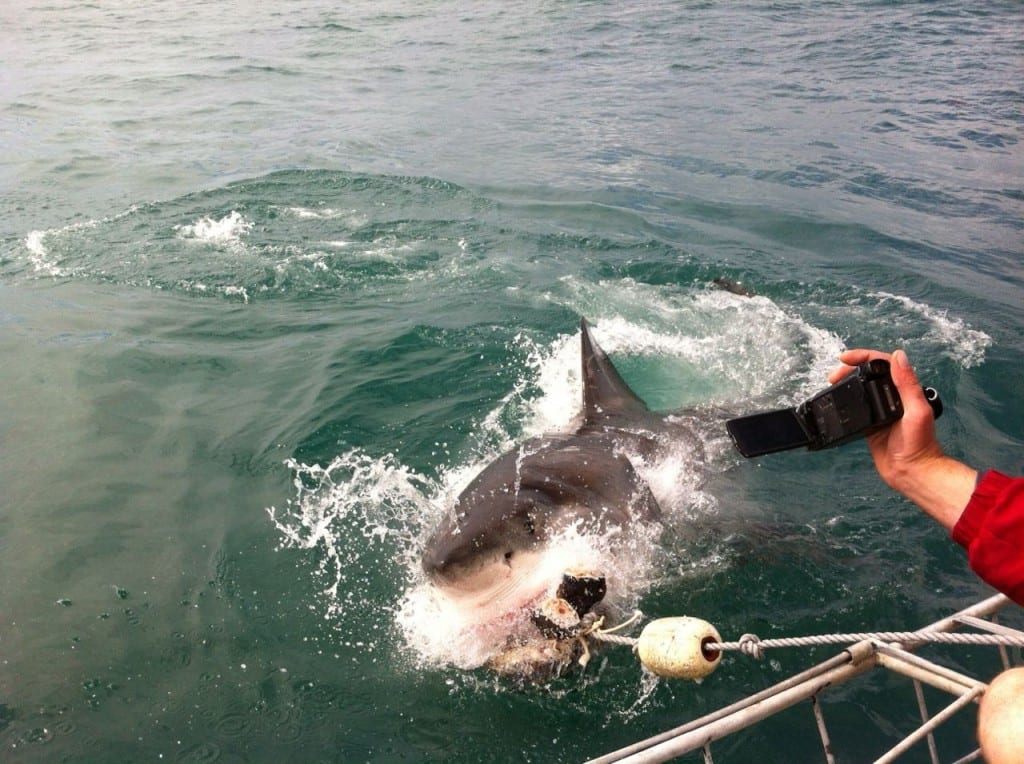 I have to confess I was disappointed at how my underwater photos came out. With a few notable exceptions (see below), the shots I took from inside the cage were blurry bubbles or the broad side of a massive fish – never really the crisp images I was hoping for when I purchased the housing just prior to the trip.*

*To be fair, it’s not the camera’s fault at all. Every other time I’ve used it, like when I was diving in the Red Sea, I’ve come up with clear, colorful shots. I blame myself – I was so excited I could hardly hold the camera, and combined with swells and, I dunno, 14-foot man-eating monsters biting the cage, it may well have been user error! 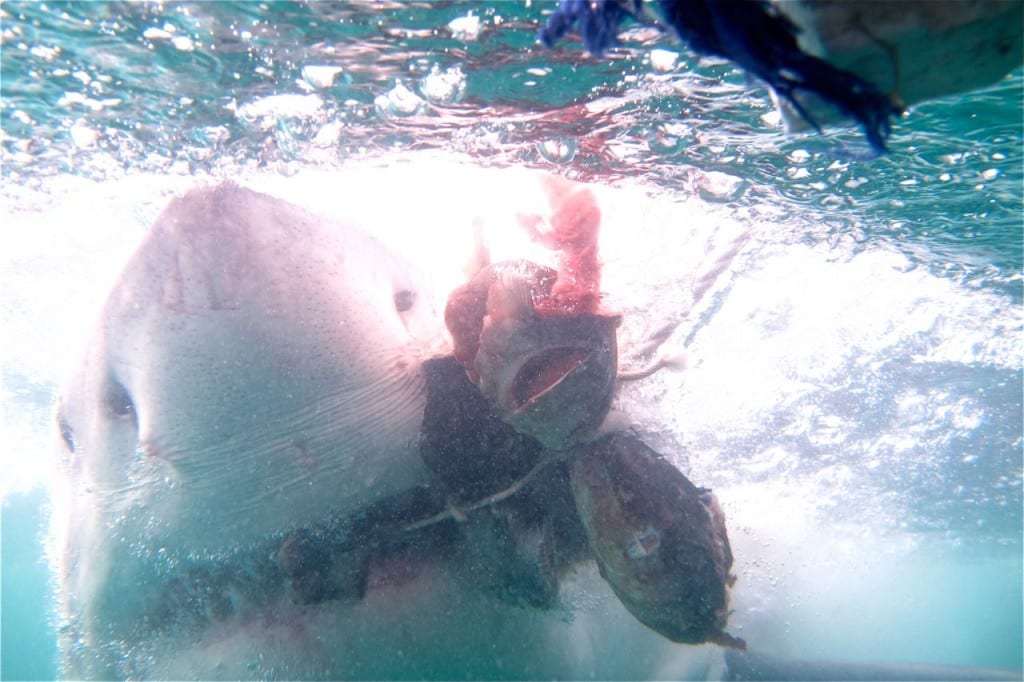 The one thing I wanted for my birthday was for a Great White Shark to chomp on the cage while I was in it. And boy did I get my wish! As I was waiting for the next encounter, I guess I leaned a bit far outside of the cage with my camera… and hands. I didn’t realize that the guys above had chucked out a chummy treat and were luring a monster right up to the cage.

By the time I snapped the shot above and realized what was going on, it was all over. I’d slammed my body backwards against the opposite side of the cage as hundreds of razor-sharp teeth sunk into the soft foam immediately in front of me.

Cheering ensued. I was ecstatic. It was the perfect birthday gift for a shark lover like me. 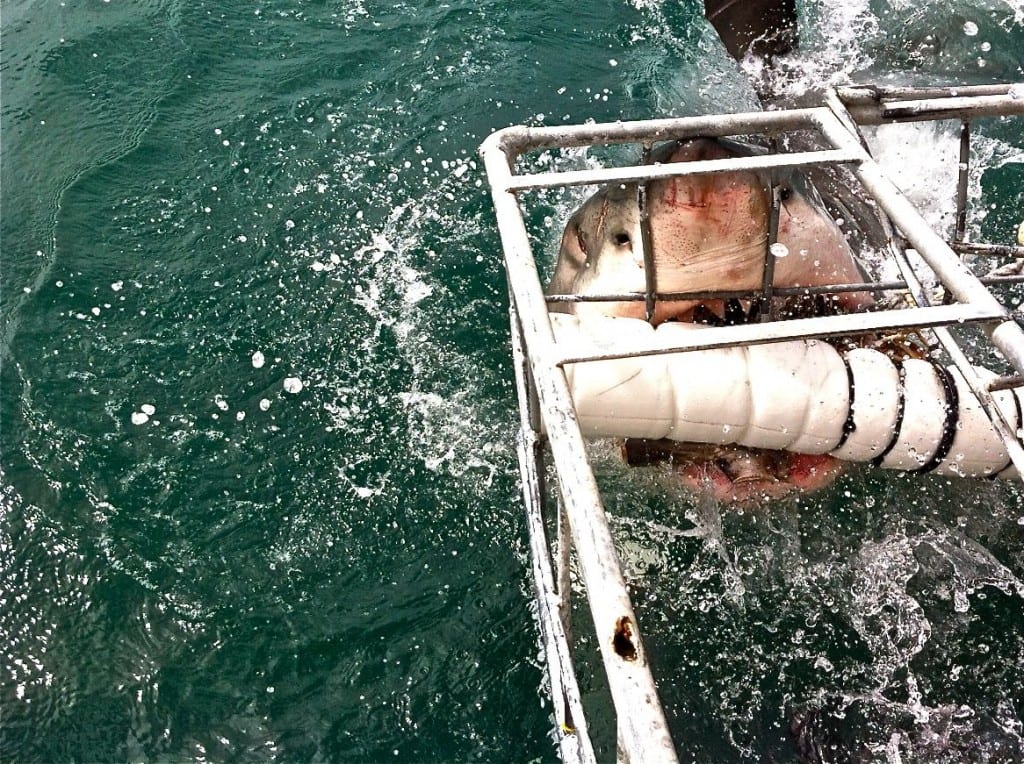 I can’t explain why I don’t fear sharks. Is it because I grew up in a surfing family, where we accept that sharks are a part of any day out on the water? Or because I rode JAWS at Universal Studios in Orlando so many times that sharks became hilarious instead of scary? Or because my Uncle Bruce punched a tiger shark in the face in Hawaii and scared it off? (True story. Yes, my family is awesome.) 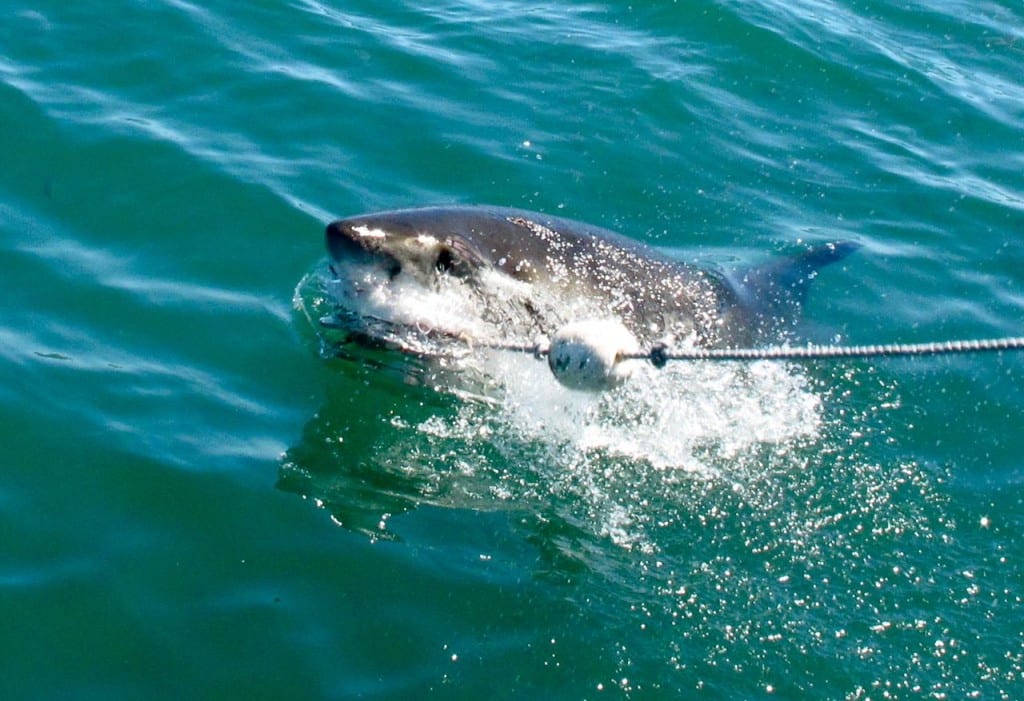 There’s really no way to get to the bottom of why tiny roaches frighten me more than real life sea monsters. (Roaches are so scary to me I can barely type the word. Seeing the word on this page makes me never want to look at the page again. And I want to take a bath in Raid now just in case. Ick.)

Whatever the reason, it doesn’t matter. I’m hopelessly devoted to sharks. 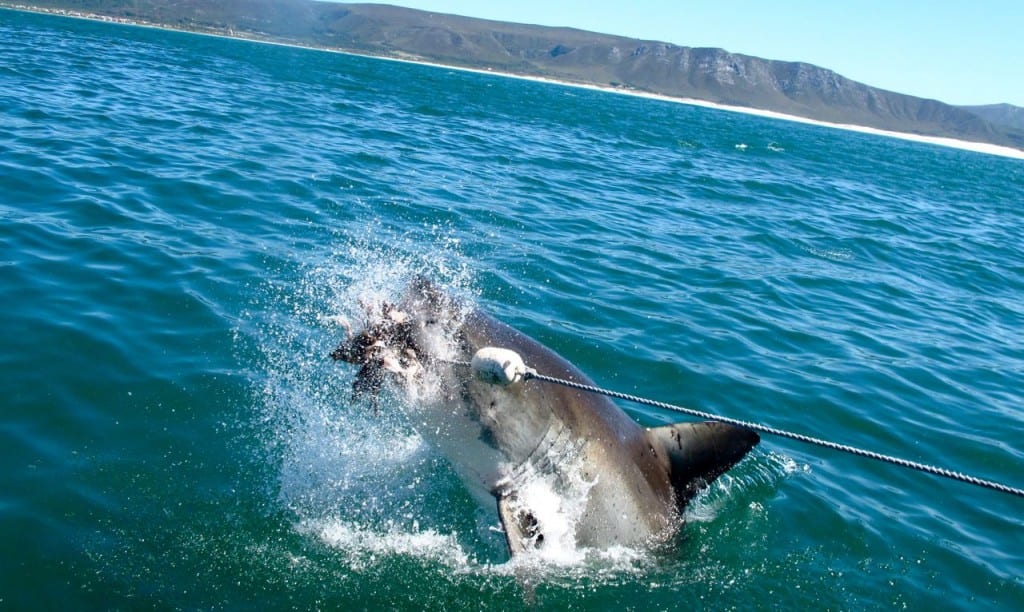 My devotion runs so deep, that I just had to go out with the White Shark Diving Co. twice while I was in South Africa. As much as I enjoyed the playful whales in Hermanus, they just don’t get me going like the big guys at Shark Alley. 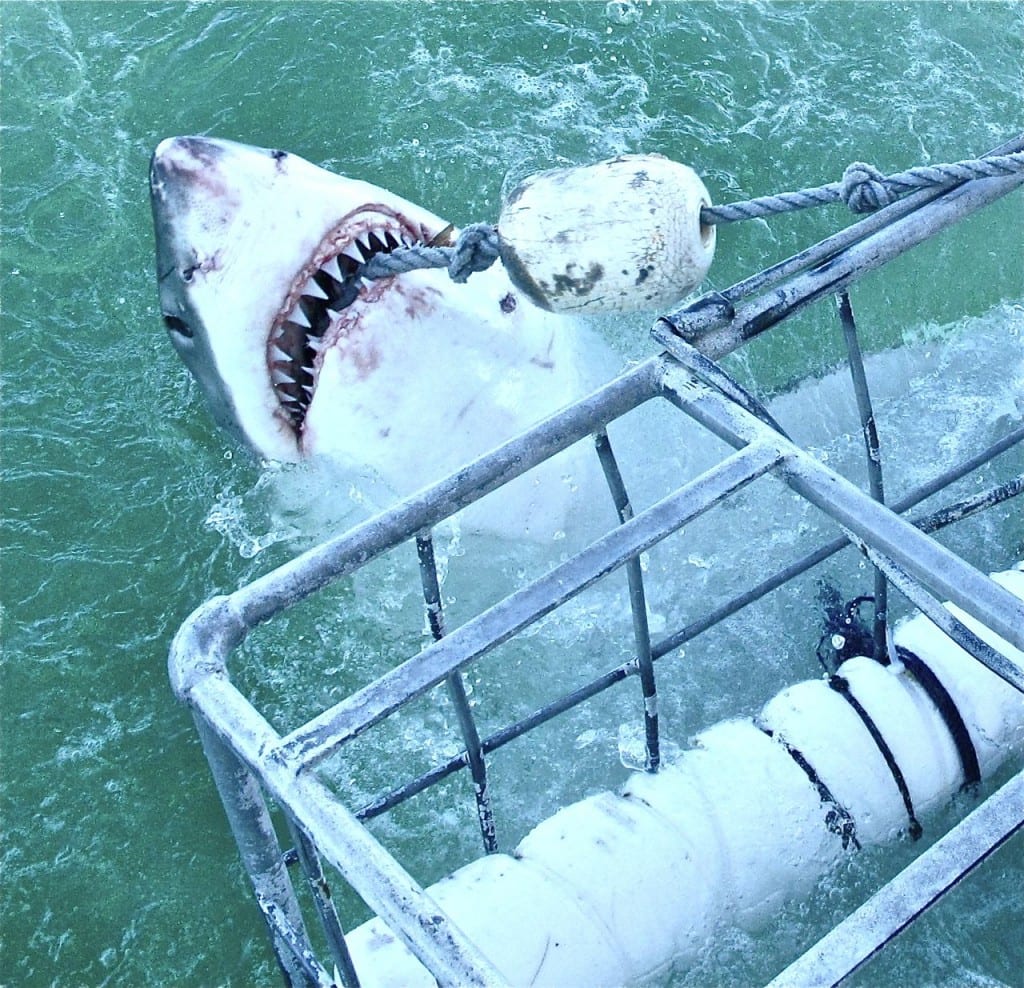 The second time out, I skipped the cage in favor of snapping better shots from above the surface. I found a way to perch outside the boat and tuck my legs under an external railing. Had a shark decided he was coming for me, I’d have been a goner. But I like to think we (me and the sharks in South Africa) have an understanding.

We’re cool. We’re amigos. We understand each other. Chomp, chomp. 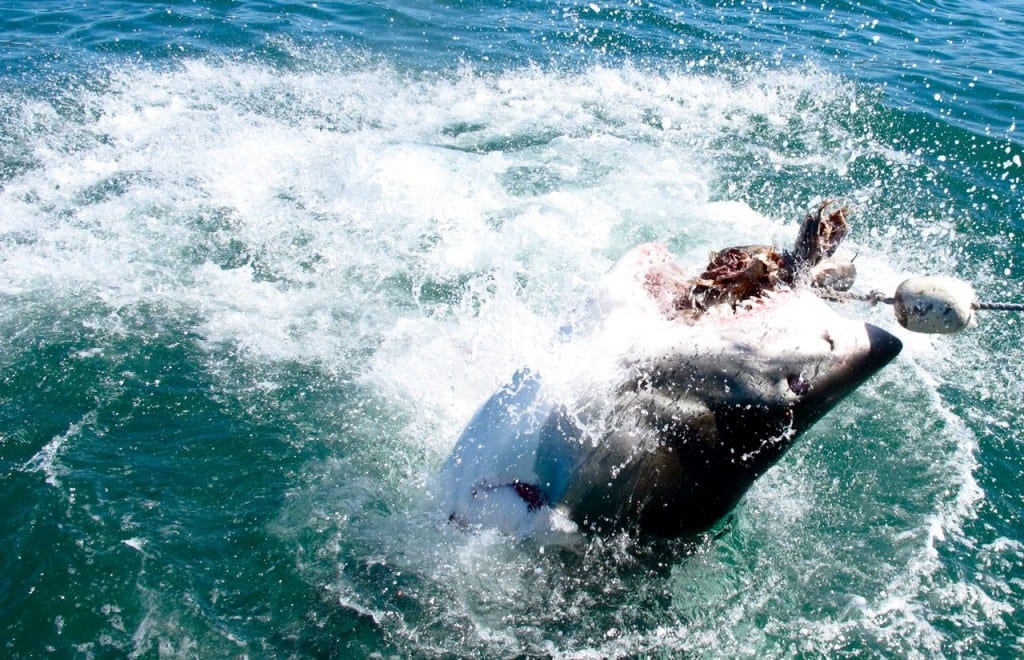 And tell them Sharkweek sent you.

15 thoughts on “My Love Affair with Sharks”