Perpetual motion, and in my case, constant travel, isn’t always memorable or fun or amazing – though pictures might make folks assume otherwise. Sometimes a weary wanderer just needs to go through the motions, in slow motion. As I neared the end of my scheduled year of global zig-zagging, South Africa became my unofficial braking zone where I would slow down, reflect and try to get some perspective on the year that had just flown by.

It’s not that Cape Town wasn’t great, because it really was, but I felt I needed to get out of the city and its trappings to ponder the culmination of my dream and world travel and volunteering and turning 30, etc. And I don’t know about you, but I do my best pondering on the water, so I took a ridiculously expensive taxi* to the coastal village of Hermanus, about 90 minutes from Cape Town, to get some head space.

*Really enjoyed South Africa, but the public transportation is basically non-existent. Not an easy place to get around unless you have a rental car. 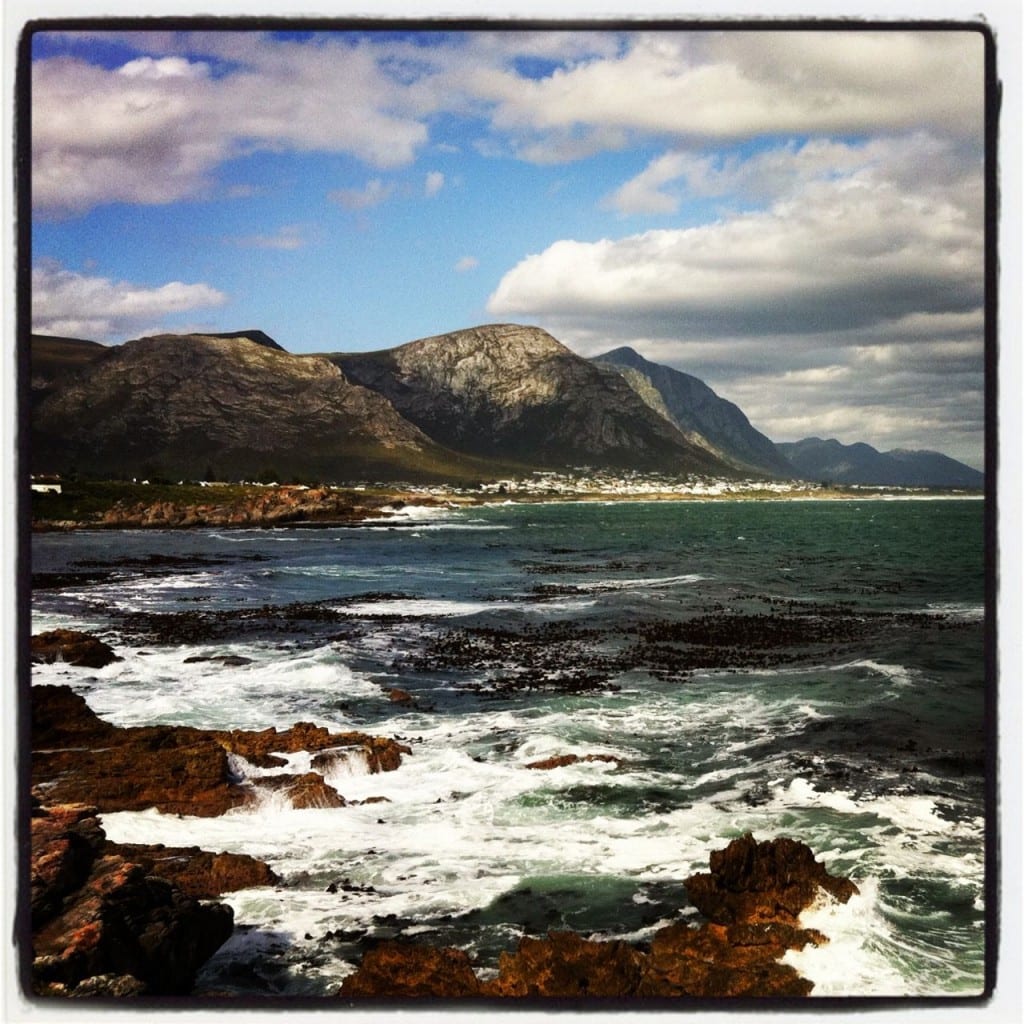 The view in Hermanus 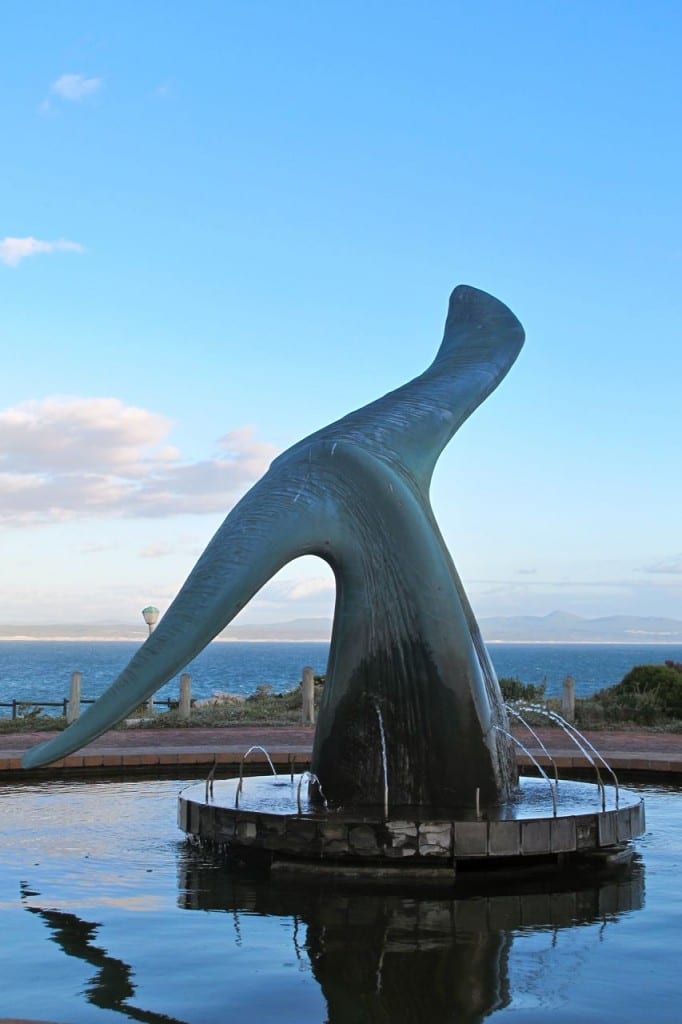 Hermanus’ whale statue – is that all there is?

Hermanus (thankfully no longer known as Hermanuspietersfontein) is famous for the Southern Right Whales that are known to frolic in Walker Bay. I was told you could see the whales from the cliffs, but I was skeptical. The claim seemed like a too-perfect-ploy to lure tourist dollars into a tiny fishing town, so I wandered from my sunny room at the Marine Hotel to see for myself. 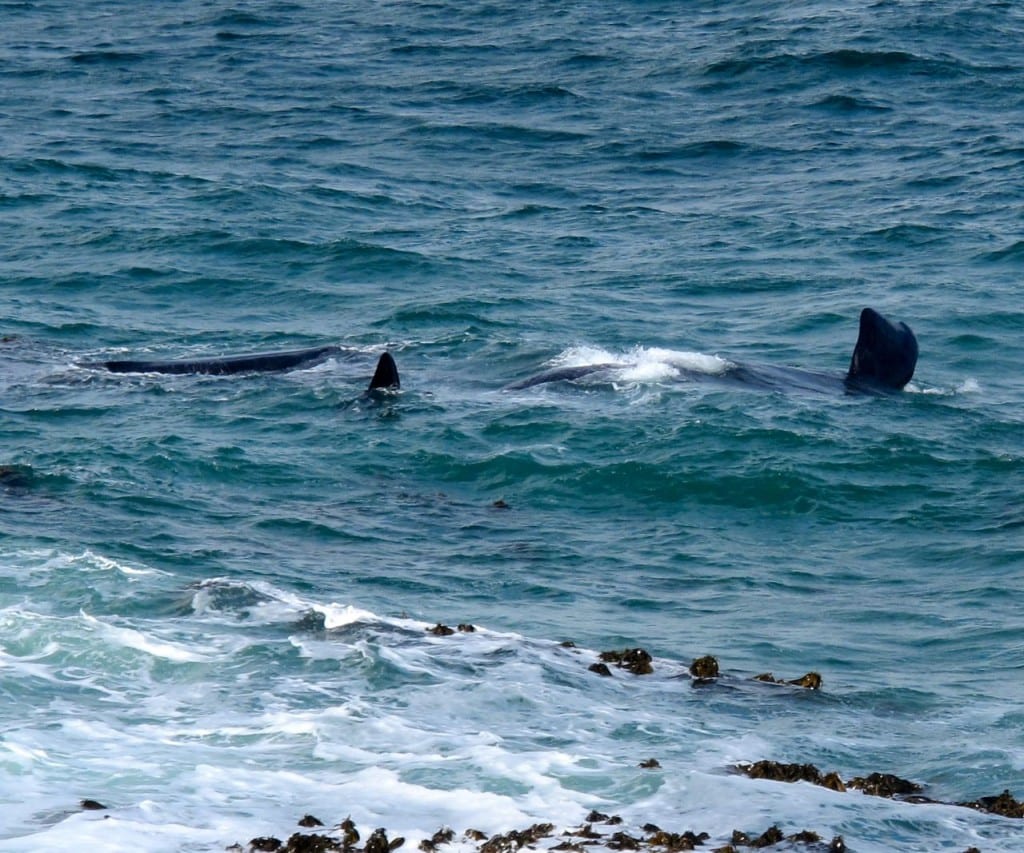 “Oh. Oh! There are whales!” I said, pointing out a shiny black fin to no one in particular as soon as I stepped onto Hermanus’ famous Cliff Path, which winds 12 km through the rocky region. Just in front of me, with no binoculars needed, I spotted a huge whale – the first I’d ever seen in my life – just waving a fin in the air, rolling around and enjoying the sunny day about 30 feet from the shore. 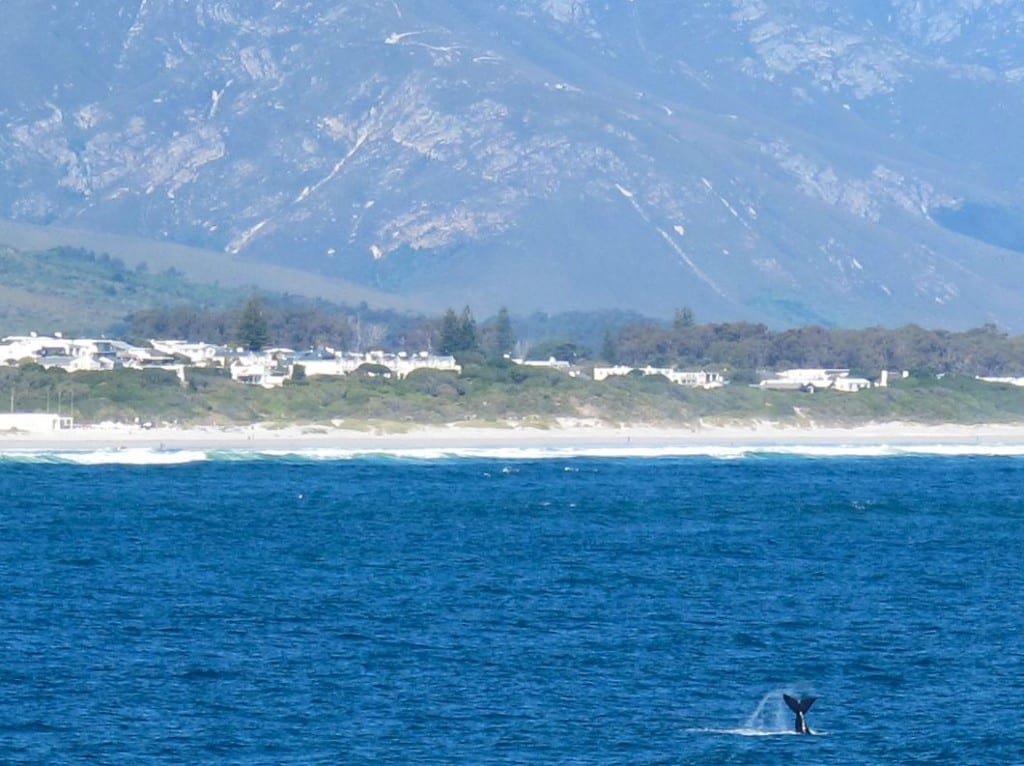 I was captivated by the dramatic cliffs, the kelp forests waving in the clear shallows below and of course, the slow-as-molasses marine life. Instead of returning to Cape Town in a hurry, I spent the next week wandering the Cliff Path, inhaling salty air and watching for waving whales. 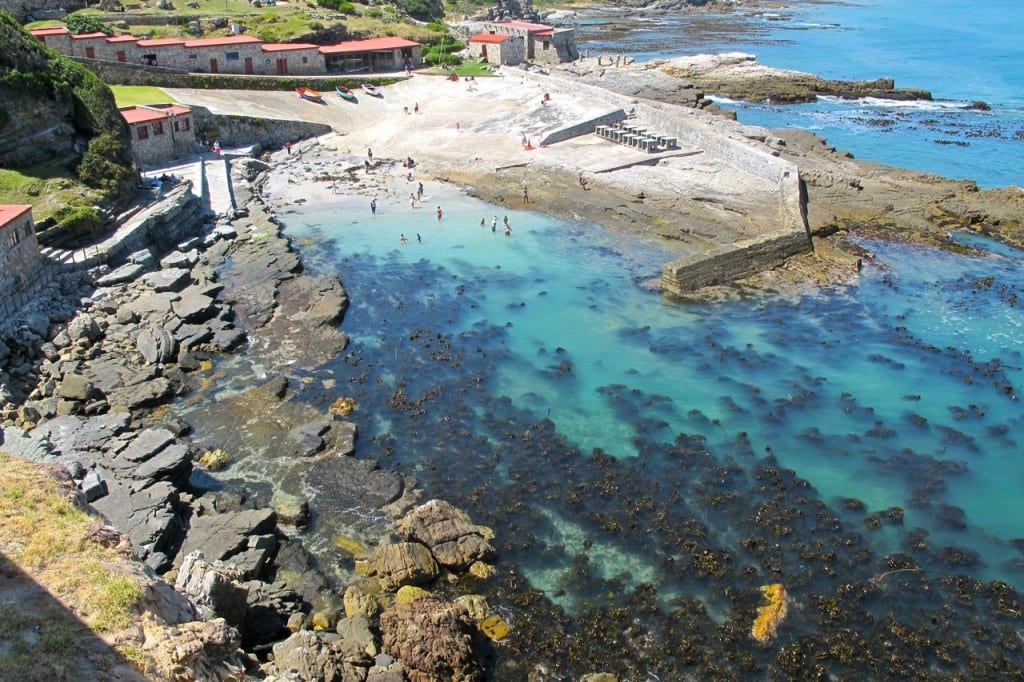 When I grew tired of watching from shore, I boarded a whale watching cruise for a closer view. While slowly making our way across the protected bay, our captain shared a million interesting facts about the Southern Right Whales who live, mate and eat in Walker Bay from June to December. I had reached Hermanus at the tail end of the whale watching season and still saw dozens of very active whales. At the height of the season, whale-spotting planes report hundreds of whales in the bay at any given time. 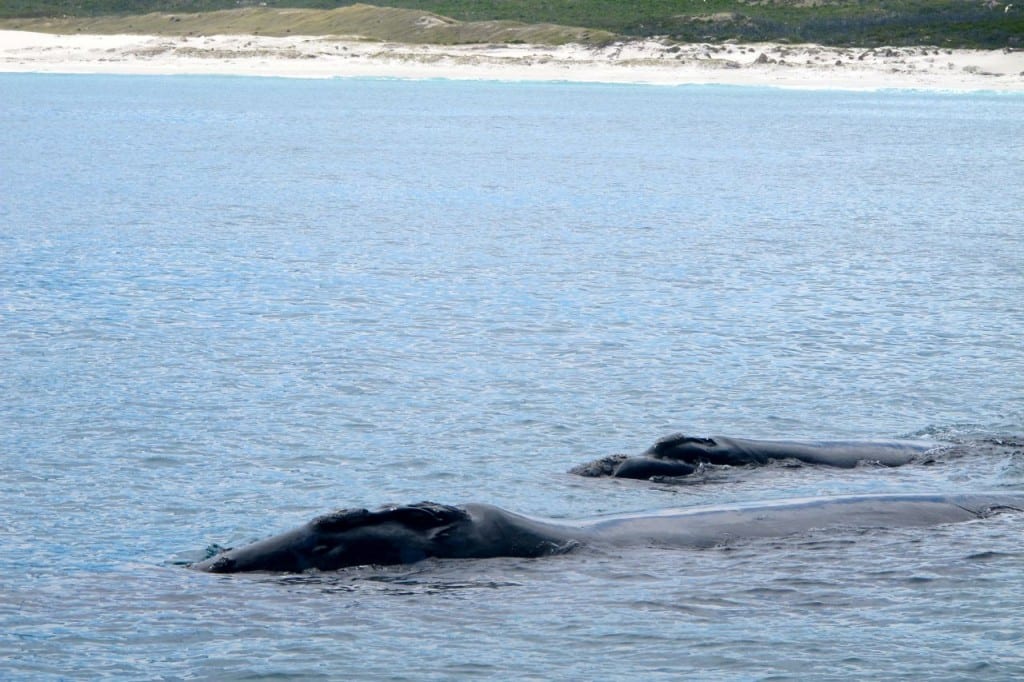 Southern Right Whales aren’t the cuddliest or cutest of marine mammals, are they?

Some Discovery Channel trivia on the Southern Right Whale: 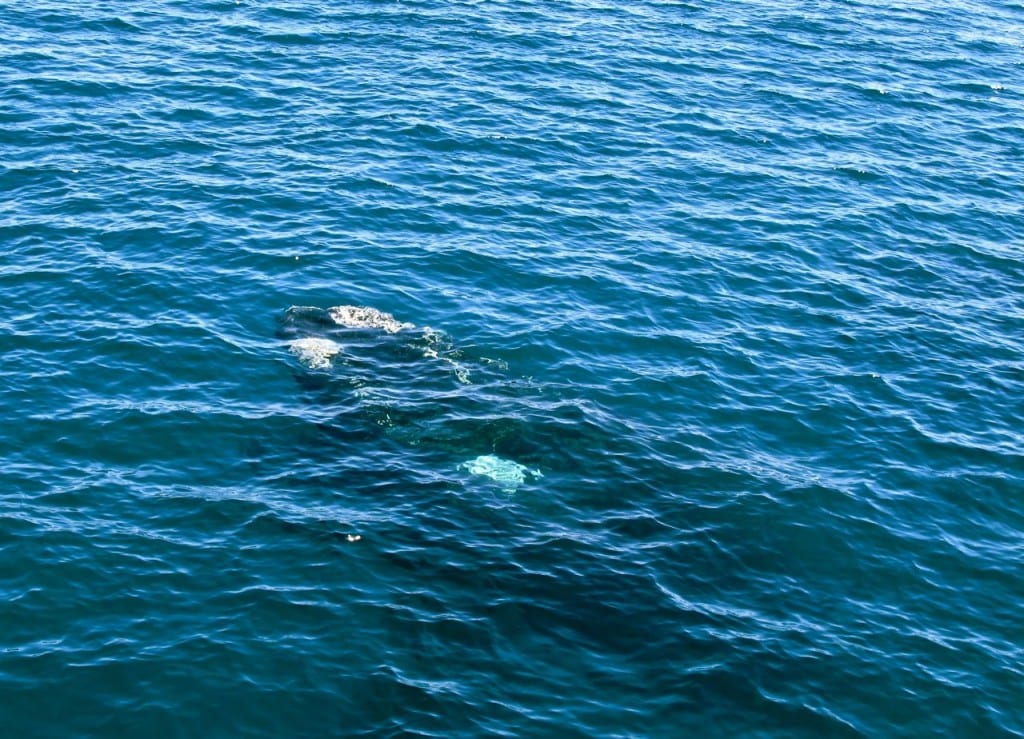 Southern Right Whales are the only whales known to use their huge fins to catch the wind and effectively sail.

By law, whale watching boats are required to stay 50m from the whales, but often the critters are curious so they pop up to say hello and sneak a one-eyed peak at the crowds assembled on deck. 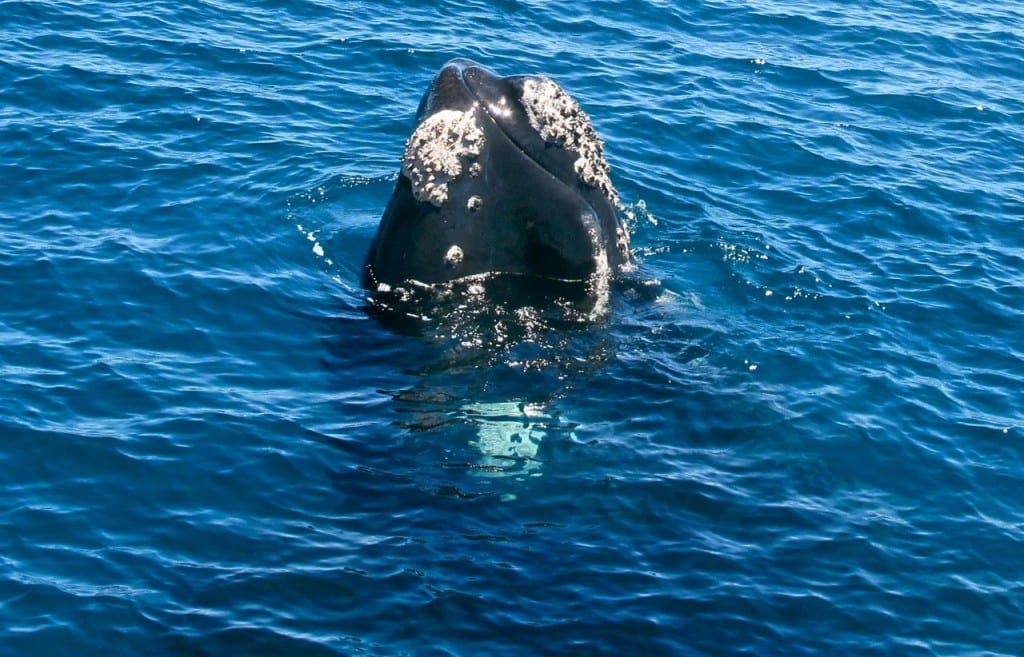 A whale pops up to say hello

Once I slowed down a bit, to a whale’s pace one might say, I began to feel a sense of peace about coming to the end of my official year on the road. I was still uncertain about what the next year would hold, but something about spending 10 days on the coast in the company of whales made me feel like everything would work out.

Tips for Whale Watching in Hermanus

1. You don’t have to do a whale watching cruise to see whales. Just show up between June and December and you’re almost guaranteed a sighting from the Cliff Path.

2. A cruise will give you a chance to get much closer to the whales and to take even better pictures, so don’t rule it out if you have some extra time.

3. Don’t rush it. The whales aren’t in a hurry and to fully appreciate them, you shouldn’t be either! Spend a few days in this cute town to feel the fishing village vibe.

So, have you ever seen whales in the wild? What’s the best place in the world to see them?

9 thoughts on “Slowing Down, Like the Whales of Hermanus”