If you’re just joining us, I’m in the middle of a very scary story! Click here for part 1! plane crash

I gripped my armrest. Mud sloshed over the plane. I couldn’t see 10 feet. Out the tiny window, the savanna was going through a spin cycle, wind and rain whipping where there once was an endless swath of green grass and bright sun. plane crash

I panicked. I prayed. And yes, my life flashed before my eyes.

The pilot continued his foolish tear down the runway, but I had a gut feeling we weren’t going to take off.

Conditions weren’t right for anything but disaster. plane crash 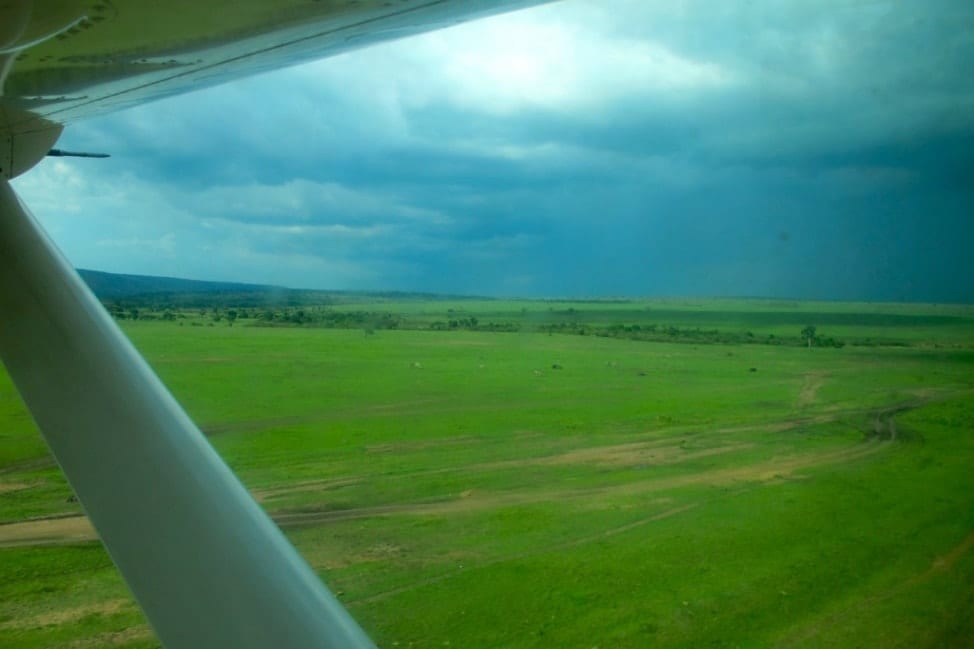 I don’t know much about the science behind how planes fly, and I attempted to look it up just now so I would sound smart, but whatever, I don’t do physics, ok? (Section 27, Article V of the Travel Blogger’s Code – No Physics) And it doesn’t even matter. Anyone with half a lick of sense knows you need lift and thrust to get into the air, and at that moment, we didn’t have either. No, we had eight terrified passengers, a madman at the controls, a mucky, slick airstrip, several inches of heavy precipitation and blustery wind swirling all around us. plane crash

As the pilot sped toward takeoff, our little aircraft fishtailed left, then right, then left, then right, hydroplaning back and forth, never maintaining a straight path. We’d skid all the way to the left edge of the dirt track only to correct and go back the other way. Carry on bags were sliding all over the cabin. I kept expecting the pilot to decelerate and wait the storm out, but instead he pressed on, determined to fly. Anyone – seriously, anyone – could see it was impossible… and reckless and dangerous and stupid. If we managed to get off the ground, I knew we’d be coming right back down. And possibly not in one piece.

So what did I think about when I thought I might be in my life’s last moments?

-I sent up a quick prayer for help and thought I might be on my way to heaven a lot sooner than I expected. I’m not afraid to die because I know where I’m going when I do, but I was pretty concerned about not dying and suffering some painful injuries. plane crash

-I remember thinking that if I survived the inevitable crash – either from flipping us end-over-end, breaking the wings off and exploding in a fireball or from wind slamming our airborne plane back down to the ground – there was a chance I’d also have to survive a secondary fight when animals came looking for supper in the wreckage. You know in some carnivorous circles, travel blogger is considered a delicacy!

-I wondered if I had cell service out there and who in the world I could call for help.

Hey, Mom. Yeah, it’s Ange. So don’t freak out, but uh, I’m upside down in a burned out plane. Where? Um, the Masai Mara in Kenya. It’s a nature reserve. Yes, yes there are wild animals. No… there isn’t really an address per se. Well, there aren’t any roads. What’s around me? Uh… a herd of elands. Elands, you know, they’re like antelopes. No, not the small ones – you’re thinking of Thomson’s gazelles. These are bigger, with horns. You know what, nevermind. I’ll call you later.

-I thought about how certain relatives would gloat at my funeral that they were right about this “solo female traveling around the world” thing being a bad idea.

Totally called it! I knew she would end up dead! Girls just can’t travel alone.

-I also thought, in what could have been my last moments on earth, about how this whole experience would make a darn good story for AngieAway.com if I lived to tell the tale. See? I was thinking of you! Don’t you feel loved?! 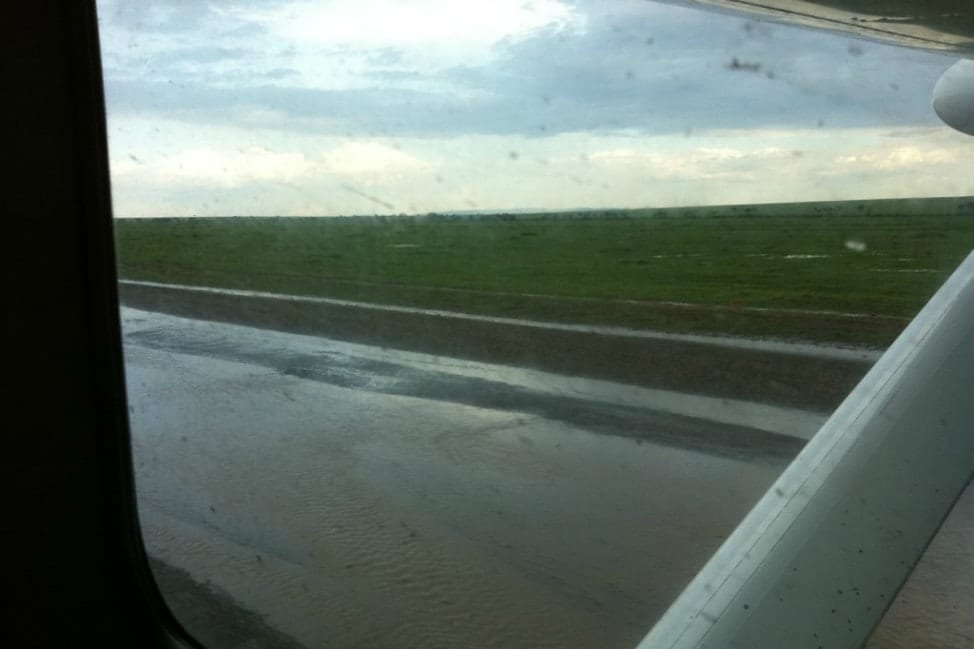 The dirt runway – well after the rain stopped

We approached the end of our taxi at full ready-to-takeoff speed and as I predicted, never had a chance of becoming airborne. Instead, we overshot the runway – yes, without ever attempting to slow down – and began to rotate out of control, around and around and around, enough times that I couldn’t count. (Not that you could reasonably expect me to count how many times my out-of-control bush plane spun into the African savanna.)

The real tragedy here, since obviously a ‘real’ tragedy was avoided, is that we quite possibly disrupted any number of migrating gnus from their peaceful grass eating. Tisk, tisk. What would PETA think? 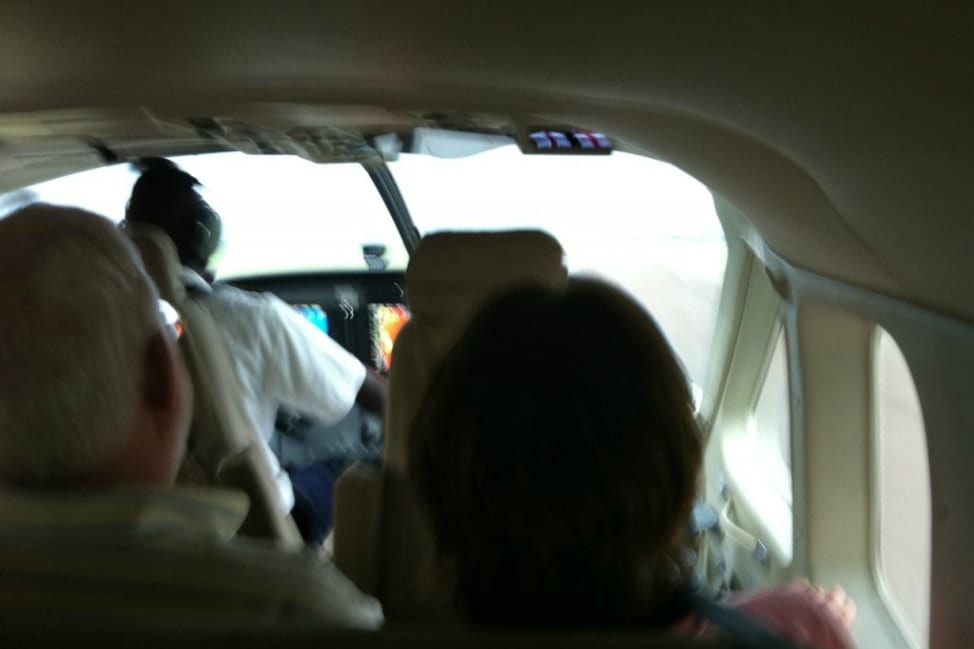 The view from where I sat

Back to the out-of-control spinning into the wilderness… I reflexively put my hands on the metal ceiling above me, hoping maybe I could brace myself and prevent a head injury if we ended up flipping. Our high speed certainly made it feel like a possibility.

I don’t know how far we got from the airstrip – outside the window really looked like a blurred, foamy, green and brown spin cycle – but suddenly, finally, we stopped.

I don’t think I was breathing. No one on the plane said a word.

The pilot flipped a few switches and turned the plane back toward the runway. We bumped across the grass in silence. It felt like it took a long time to get back. I still couldn’t see much out the window for the storm raging around us. My heart was shaking me it was beating so hard and my eyes were gaping portals of terror. (Is that dramatic enough? Y’all, I was FREAKING out.) plane crash

Finally, we made it to our original starting place and the pilot turned off the engine and propellers.

He turned around to address us all for the first time, and with no hint of irony in his booming, thickly accented voice said,

The plane cannot take off.

I sat there with my jaw on the floor as he lifted the door and hopped out to examine the runway. Once he was out of the plane, I turned around to the other seven passengers and said, “Is anyone else here totally freaking out?” plane crash

The German lady in front of me, I kid you not, said, “I’ve never been in a small plane. It’s all so exciting!”

WHAT?! Nein, nein, nein, Frau Crazy Brains! This is not an amusement park ride! Incredulously I explained that careening out of control is not normal. plane crash

Two Kenyan guys in the back piped in, “Yes, he is a very good pilot. He saved us all.”

I’m sorry, but wha??? A good pilot wouldn’t have attempted such a takeoff in the first place. I certainly wasn’t going to give him a pat on the back for saving our lives when he’s the one who tried to kill us to begin with.

Three curious Masai in a worn out pickup truck pulled alongside the runway, the apparent emergency salvage crew in case our second attempt failed. Obviously, since I’m here to tell the tale, we did eventually take off and make it back to Nairobi, after the storm passed and after another scare in the air. (This post is already too long – ask me about it in person!)

Everyone cheered once we were finally airborne – except me. I was holding the armrests way too tightly to bother with clapping. 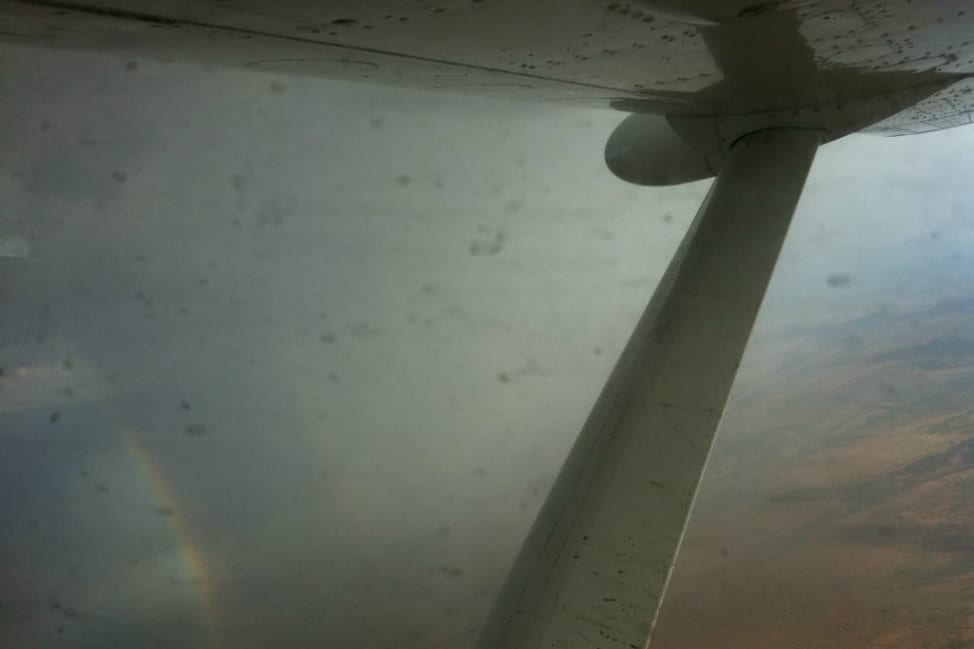 A rainbow and relief

A few days later, I reported my discomfort with the incident to the airline and was told the pilot is ex-military with several thousand hours of flying experience — but sadly he’s not a good communicator.  They very much regret he was not able to reassure all the passengers as the events unfolded. I was even refunded for that leg of the flight. But I would never fly with them again. You just let me know if you’re planning a trip to Kenya and I’ll be happy to share the airline with you.

So, how do you define a plane crash? Does this count a little bit?

43 thoughts on “How Do You Define Plane Crash? My Near-Death Experience in Kenya”