“Next to being married, a girl likes to be crossed a little in love now and then. It is something to think of, and it gives her a sort of distinction among her companions.” – Mr. Bennet, Pride & Prejudice

After the year I’ve had, I’m starting to feel very distinguished among my companions.

(If I were a character in one of Jane’s stories, I’d be long overdue for a dashing, heroic, good quality man with a large estate – or a job – to show up and fall desperately in love with my sass. Tick, tock, Mr. Darcy. Tick, tock.)

Since I’d just had an encounter with my own shady Mr. Wickham, I decided to make my way to Jane Austen country to wander the vast Hampshire fields, think mopey jilted thoughts in my most posh accent and make some sense of the situation.

“Friendship is certainly the finest balm for the pangs of disappointed love.” Catherine Morland, Northanger Abbey

Of course I never intended to go to England this year, and it should’ve been the last place I fled to considering my Wickham lives there, but there were a few reasons the trip made good sense. Somehow I knew that a pilgrimage to Jane’s world would do my heart good. I wanted to see where she wrote and what scenery inspired her stories, to sit in her family pew at church and to walk in her footsteps in Winchester and Bath. We may have lived a few hundred years apart, but something in my gut told me if anyone would empathize with my current situation, it would’ve been Jane.

While quality time in Jane’s world was my first priority, I’d already made the decision to go home to the US for a bit and the cheapest route was London to NYC, so financially, England was the right choice. And though walking with Jane was my goal, her influence on me is quite recent. Long before I was introduced to Longbourn’s inhabitants, I devoured Clive Staples Lewis’ Screwtape Letters again and again, and before CS, I had a longstanding love affair with Mr. William Shakespeare. And that’s why I’ll soon be writing about Oxford and Stratford as well.

(And if I’m being really honest, just between us, Harry Potter and the Deathly Hallows was premiering that week, and I wasn’t about to watch it dubbed into Spanish in San Sebastian. Can you imagine? ¿Donde estan los horcruxes? And what better place to experience the culmination of the Harry Potter phenomenon than London? Yes, I’m a superfan! Stay tuned for lots of HP tidbits from my trip!) 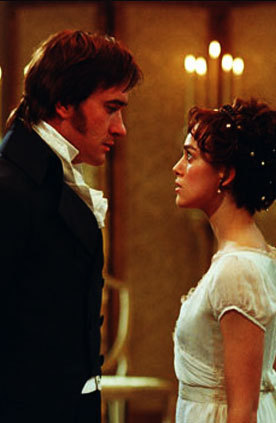 Back to my fixation with Jane.

I’d never read any of her work until I fell in love with Lizzy & Mr. Darcy in the 2005 Keira Knightley version of Pride & Prejudice. I inhaled the whole book in one sitting, and have read it nearly a dozen times since, along with Sense & Sensibility somewhere along the way. While I was on my pilgrimage, I caught up with her other works – Lady Susan, Emma, Northanger Abbey, Mansfield Park & Persuasion. Delightful & yummy, every last word!

It’s taken half a decade to get to know her, but now that I do, I quite think Jane and I would’ve been friends had our eras and coordinates ever crossed. Despite a couple hundred years of distance, we’d have much to talk about. We both have especially devoted relationships with our sisters. We both chose unusual career paths. And we’re both afflicted with razor sharp tongues, but blessed with the good sense to bite down when needed.

In Jane’s day, it was quite a peculiar career choice for a woman to be a writer. She couldn’t even use her name to publish; her books only referenced “A Lady” as the author. How gutsy of her to choose that path regardless of society’s expectations! She must’ve faced so much opposition from her family, friends and neighbors, and yet she persevered. I can certainly relate to that after this bizarre year on the road!

(I could go on forever, but I’ll stop now or this is going to become a book report.)

My rambling literary journey took me from London to Winchester to Bath and several points in between, and it turned out to be exactly what I needed to get out of my travel funk and start looking ahead. I can’t wait to share the whole adventure… so stay tuned!

10 thoughts on “In a Travel Funk? Time for a Pilgrimage.”