Ultimate Guide to a Weekend in St. Simons Island, Georgia

Do you hear that? Gentle breezes in ancient oak trees… calm waves lapping the shore of an impossibly wide stretch of beach… laughter echoing down the street from the best local restaurants. Where are you? It must be St. Simons Island, Georgia, ranked one of the U.S. Best Coastal Small Towns by USA Today.

Appreciated for a rich history spanning from 2500 BC to the Revolutionary War to World War II, the island is also known for its natural beauty, salt marshes, palm trees and moss-covered oaks, as well as long stretches of wide beach. St. Simons Island is one of the friendliest, quietest, loveliest little gems you could ever hope to find. And it’s about an hour from Savannah and Jacksonville, 3 hours from Charleston, SC, and about 5 hours from Atlanta, Ga., or Charlotte, NC.

Welcome to the Golden Isles of Georgia

Did you know that the state of Georgia has a stretch of barrier islands unlike anywhere else in the US? Some are fancy with stately homes and elusive celebrities, some are all natural with ruins of pre-Civil War forts and oaks draped in moss. Whichever island you find yourself on, from Sea Island to Little St. Simons to Jekyll or anywhere in between, all the Georgia islands are as friendly and Southern as sweet tea.

Where is St. Simons Island?

St. Simons Island is one of the major islands off the Georgia coast, situated between Sea Island to the north and Jekyll Island to the south. Only 15 minutes from the East Coast’s major artery of I-95, it’s easy to get to via road trip or nearby airports in Brunswick (BQK), Jacksonville, Fl. (JAX) or Savannah (SAV). There’s also a local airport for private aircraft (SSI.)

St. Simons Island and neighboring Golden Isles are blessed with a semitropical climate – long, hot summers punctuated by short, milder winters. We just visited in April and it was idyllic – the perfect weather for daytime pool fun and chilly evening walks. Hurricane season is May – November, but don’t let that stop you from visiting! They usually sail right past.

The King and Prince Beach and Golf Resort

You absolutely can’t go wrong with a stay at The King and Prince. It’s my favorite spot on the island for comfy accommodations and good food at ECHO, the only oceanfront restaurant on the island. And speaking of oceanfront, it’s the No. 1 place to watch the sun rise over the Atlantic, either from your balcony, a swing under the palm trees or from a lounger on the pool deck.

St. Simons is a compact island, so you’re never too far from whatever is on your Golden Isles bucket list. While The King and Prince Hotel is located conveniently on St. Simons Island, it’s also a great central spot to base yourself for adventures on neighboring Sea Island, Little St. Simons and Jekyll Island.

Now, I’m no golfer, but apparently the resort’s award-winning golf course is a huge draw. The good news is that you don’t have to have a putter to appreciate the St. Simons Island, so pick an oceanfront villa, rent a bike and cruise on the sand or have a picnic on the pool deck.

History of the King and Prince Hotel

If the prime location wasn’t enough to woo you, perhaps The King and Prince’s historic significance will do the trick. The property first opened back in 1935 as a seaside dance club. How glamorous! A few years later, the main building opened as the King and Prince Hotel.

It wasn’t long until World War II changed everything, and the hotel went from luxe accommodations to a naval outpost and training facility. After the war ended, it became a hotel once again. Today, you can see tributes to wartime throughout the hotel in various exhibits. Even ECHO, the onsite restaurant, pays homage!

Things to do in St. Simons Island, Georgia

History buffs, have I got an itinerary for you! St. Simons Island is rich in history, from 18th century British forts to a surprising and important link to coastal Georgia’s impact on World War II. For a chronological St. Simons history adventure, follow the steps below.

I told you this area goes way back! At Cannon’s Point Preserve, you can wander through a maritime forest amid shell middens (read: ancient dumping grounds) from thousands of years ago. There are also plantation ruins from the 19th century.

The Spanish planned to attack the British at Fort Frederick during the War of Jenkins’ Ear, but the British troops had other ideas. They ambushed the Spanish and saved Fort Frederica in a site you can now visit known as the Bloody Marsh. Admission is free.

Take a private tour of the slave cabins at Cassina Garden Club for a sobering look into the life of pre-Civil war history. Formerly the Hamilton Plantation, these two remaining cabins are made of tabby, a mixture of water, lime, sand and oyster shells, used like concrete in wooden frames.

Founded by Rev. John and Charles Wesley, Christ Church is the site of the first Christian services on the island. While the original church was almost completely destroyed by Union troops during the Civil War, islanders saved what they could to rebuild today’s gothic church in 1884 with narrow stained glass windows commemorating the life of Christ alongside beloved local residents. There’s a historic cemetery worth wandering around as well, with the oldest grave dating back to 1802.

Fort Frederica National Monument is a can’t miss historic site on St. Simons Island.  Not much is left of the 18th century British fort and its neighboring town, but the ruins give you just enough space to imagine the village built to defend Georgia from the Spanish forces.

Don’t miss the St. Simons Lighthouse and Museum. If you’re up to it, the climb to the top offers a panoramic view of the Atlantic coast. There’s a lovely museum inside the adjoining Keeper’s Dwelling, with insight into the area’s most famous shipwrecks and former citizens.

It’s easy enough to do a self-guided tour of St. Simons’ historic sites, but trolley tours are also a hot ticket. Definitely plan to hop on at least one when you visit. There are three trolley tours to choose from on St. Simons Island and they all depart from the St. Simons village fishing pier.

Entertaining and informative tour stats at $20 for adults. StSimonsTours.com

Note: All are available for weddings, corporate parties and private tours.

One of only 5 lighthouses remaining in Georgia, St. Simons lighthouse is a landmark you don’t want to miss. You can club 129 steps to the top for incredible views of the Golden Isles. Adjacent to the Lighthouse and Pier Village, Neptune Park is a public pool, playground, mini golf course, water park and picnic area that kids go crazy for.

This area is also your best bet for fun, local shopping.

Ride a Horse on the Beach

I’m not much of a horse fan but I know riding a horse on a windswept beach is on many a traveler’s bucket list, so I’m including here. Check out the Stables at Frederica for beach rides, professional riding school and easy marsh rides to introduced the kiddos to horses. thestablesatfrederica.com

Pamper Yourself at the Spa

There are several spa options on St. Simons Island, including Island Day Spa which offers day packages including facials, pedicures and excellent massages. Ask for Terez if you get the 90 minute Island Signature Massage. She’s wonderful! theislanddayspa.com

It would be a mistake to visit Georgia’s Golden Isles with a packed full itinerary. Be sure to liberally sprinkle in time for sitting on a porch swing or a rocking chair, for long, lazy sunrise walks on the beach and sunset cocktails on the patio at ECHO. Bring along a few books and post up by the pool for the whole day. After a day or two, St. Simons Island’s leisurely pace will wrap you up and you’ll get why people vacation here year after year.

The most important decision in all of travel: where to eat! Here are my picks on St. Simons Island.

Don’t miss ECHO for the best views on all of St. Simons Island. There are both inside and outside tables, so if the weather is nice, it’s the loveliest spot to dine on Southern coastal cuisine and creative craft cocktails.

But why is it called ECHO? it’s a nod to the island’s World War II connection. (Check out the museum just a few blocks away to learn all about it.)

On weekends, there is often live music, and the unlimited Bloody Mary bar at Sunday Brunch is the hottest ticket in town. Be sure to make reservations to ensure you get a spot.

A St. Simons Island favorite! Crabdaddy’s has been serving up shrimp and grits and signature cream sauces on the catch of the day since 1988.

If you love famous Nashville hot chicken, you’ve got to check out Porch’s Golden Isles version. You can choose your spice level on any dish, from naked to napalm. Yikes! Don’t miss famous Mother Clucker Monday if you’re in town during the week!

If you’re a fan of Food Network’s “Diners, Drive-Ins and Dives,” you might recognize this spot from an old episode. Everything is smoked for 12 hours, from pork to ribs to brisket, you’re gonna want to try a little of everything. There are four homemade barbecue sauces as well that you can take home as a souvenir.

Fan favorite right here! Open for dinner only, McIntosh blue crab stew, blackened shrimp and cheese grits are a great place to start at this outpost near historic Fort Frederica. Don’t forget a slice of homemade pie to take home.

I wish we had more time to share every last detail about St. Simons Island, but then again, I have to leave some stones unturned so you can find them for yourself. If you have been before, I’d love you to share some of your recommendations for things to do, see and eat on St. Simons Island and in the Golden Isles at large.

DIY Peloton Alternative That Can Save You $2,000
My First Time Buying Glasses Online (spoiler – I loved it!)
SHARE AWAY
JUMP TO COMMENTS 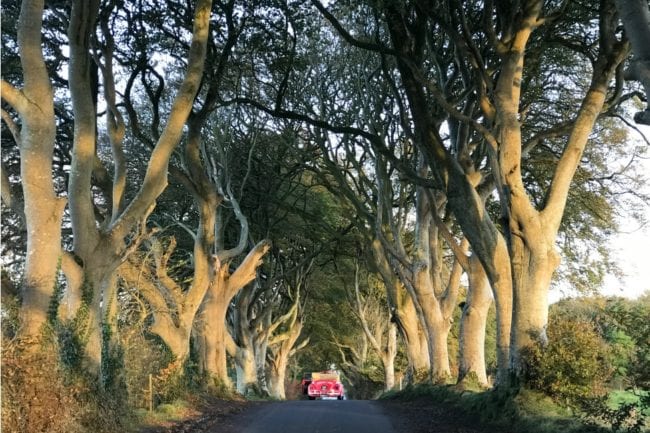 How to Take Epic Photos at The Dark Hedges

Heading West on a Road Trip with Ford 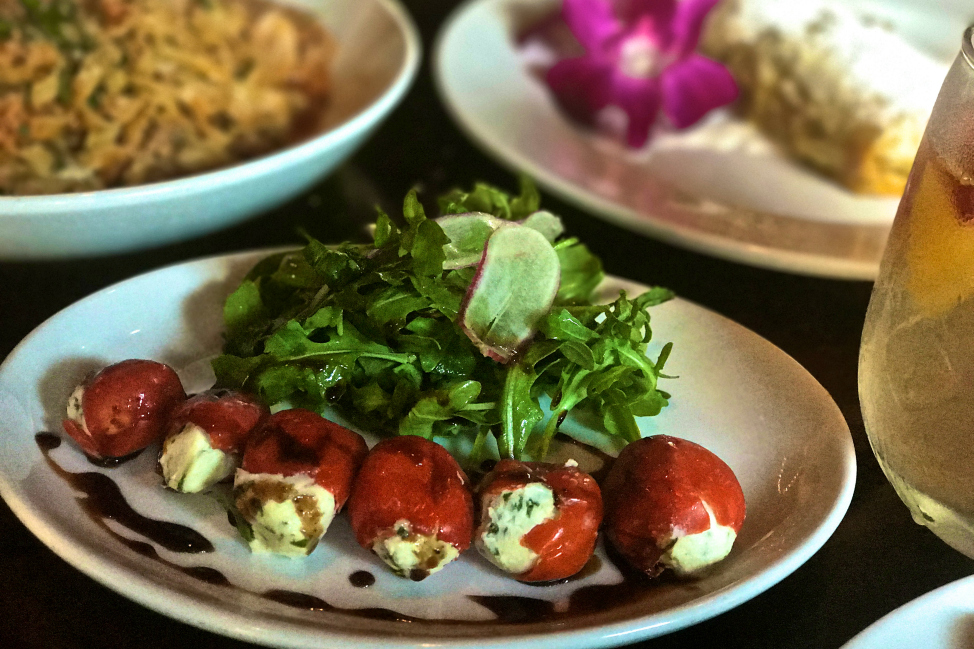 6 Places You Have to Eat in Sandy Springs