Welcome to Northern California, my friends! Home to Redwood National & State Parks, a 132,000 acre series of interconnected lands along the Pacific Coast protecting almost half of the remaining coastal redwoods, some of the oldest and tallest trees in the world.

Our 61 national parks are one of the best things we’ve got going in the USA. The more national parks I visit, the more parks I want to visit, so I was pumped when my husband’s four-month work trip took him to Eureka, California, within easy driving distance of Redwood National Park. We visited in January, hiking through the towering old growth forest and wandering along the wind-whipped beach. It’s pristine and wild – exactly what you want in a national park.

What’s the *big* deal about redwoods?

Well first of all, redwoods are ginormous. The tallest one, named Hyperion, has lived quietly for an estimated 600-800 years somewhere in the national park. Its location is kept secret to protect it from eager visitors. It’s nearly 400 feet tall – that’s taller than the Statue of Liberty!

Around 1850, old-growth redwood forest covered 2 million acres of California coast. During the Gold Rush, the forest shrunk exponentially due to aggressive logging. By 1968 when Redwood National Park was established, almost 90 percent of the redwoods were already gone. 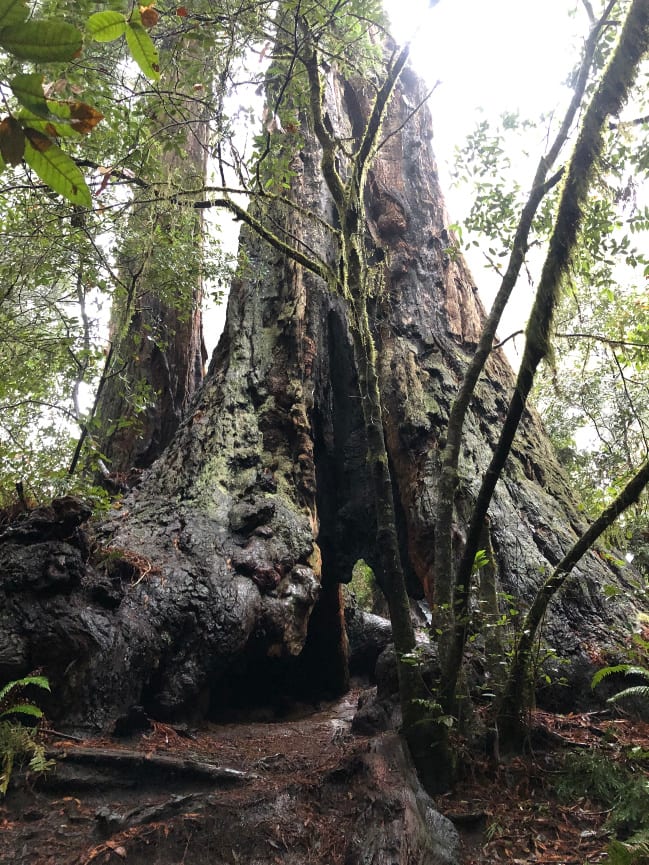 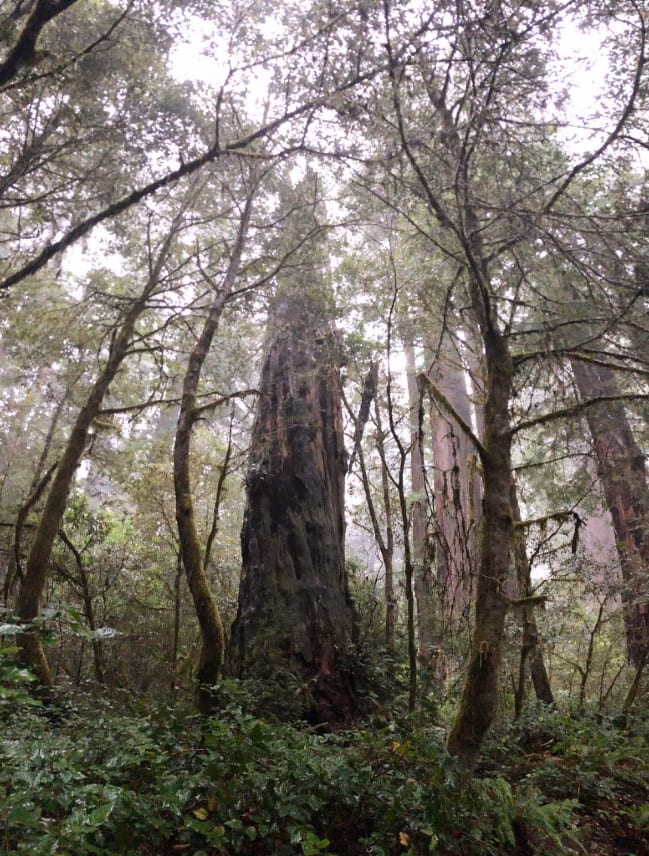 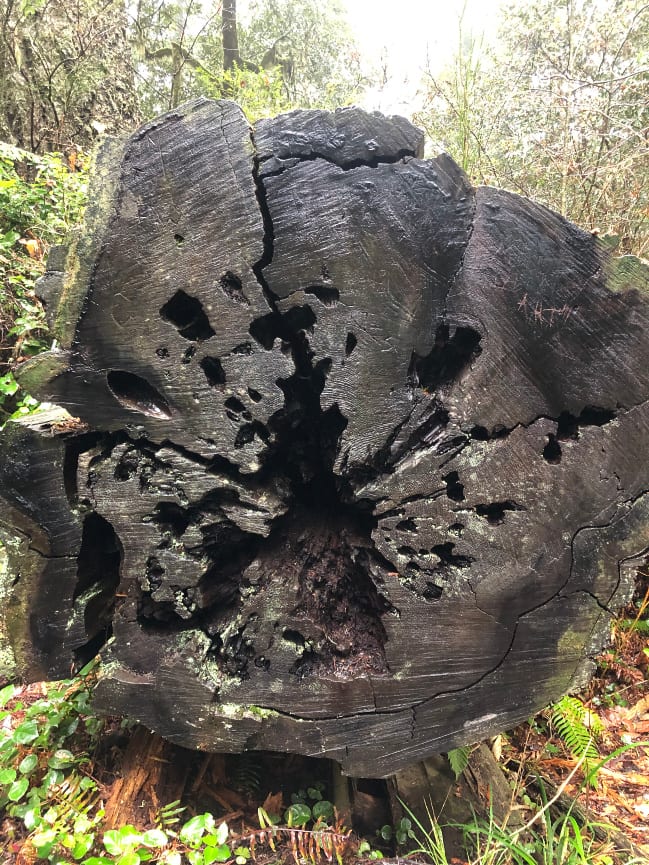 California redwoods outlive and outlast due to a favorable, wet climate, protective tannin in the tree bark which makes it resistant to pests and a thick inner bark that make it nearly fireproof.

To be able to stand at the base of these ancient giants, some who are 2,000 years old and more than 300 feet tall, is a quintessential American experience and a major consideration for any California road trip.

*Note: there are redwoods in other places around the world, but they are not old growth.

Once seen, Redwoods leave a mark or create a vision that stays with you always.

Where is Redwood National Park?

Redwood National Park is not difficult to get to per se — you can drive right in on US 101 from the north or south. But it’s a windy road and not necessarily on a main drag or near a metropolitan hub. If you’re ever close by, make the extra effort to visit.

If you’d like to fly straight into the area, there are two small airports with limited service to choose from.

From our base in Eureka, the road trip to Redwood National Park was an easy hour. We were up with the sun, grabbed coffee from Dutch Bros and picnic supplies from the grocery store, and went straight to the most popular hike in the whole park. 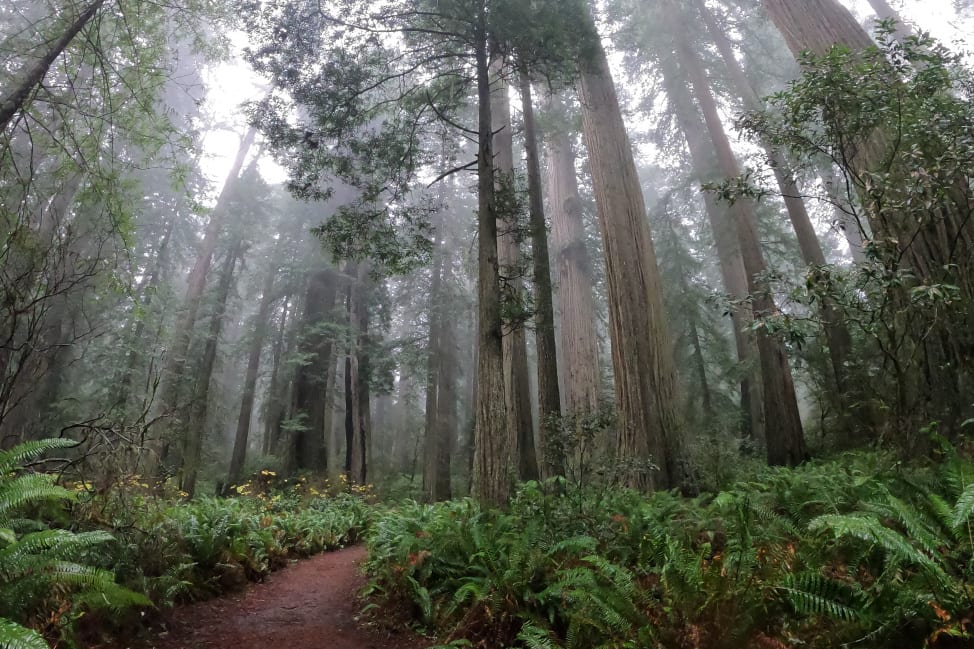 We wanted to spend the misty morning hours wandering amid the last of the tallest trees on Earth, so we made a beeline for Lady Bird Johnson Grove. There’s a 1.5 mile loop trail through the giants, with occasional placards and signs pointing out interesting facts about the individual trees.

Even in the pouring rain, wandering the trail within Redwood National Park was an incredible experience. It’s so quiet! I mean, aside from the rain and the wind and our footsteps. But really it was moving and relaxing and refreshing — just the kind of day I needed.

There are primitive restroom facilities at the trailhead. The parking lot was empty on a rainy January morning, but it packs out pretty early in the summer.

Every forest is beautiful in its own right, but knowing that this area holds the last of the coastal redwoods makes it that much more powerful.

Since we drove up from Eureka to the south, we stopped at seaside Thomas H. Kuchel Visitor Center at the park entrance. There were only a couple of cars in the parking lot, and the rangers inside were eager to answer every question we had and more. They were adamant that we be mindful of “sneaker” waves as the ocean was churning that day. We saw what they meant on the beach as an enormous tree trunk rolled around in the waves like a toy boat.

This visitor center is a good spot to pick up your NPS merchandise — after all, you have to have a hat or an embroidered fleece from every national park you visit, right? I know I do.

One surprising fact about Redwood National Park? There’s so much more than trees! Yes, the coastal giants are the superstars, but there are rivers and creeks, wide open prairies, miles of winding roads and nearly 40 miles of Pacific coastline.

3. Hike a Trail among the Trees, the Prairie, the Beach – or all of the above! 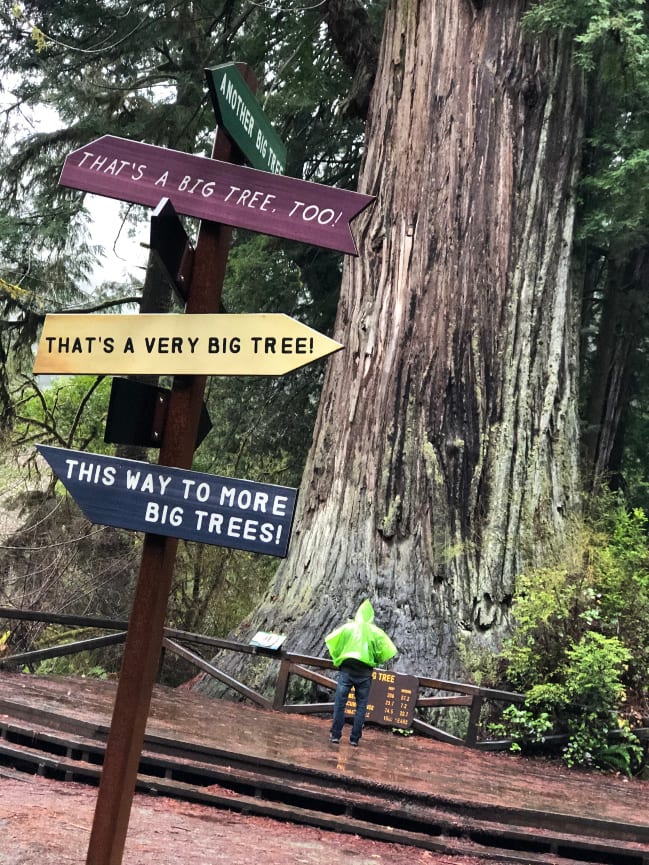 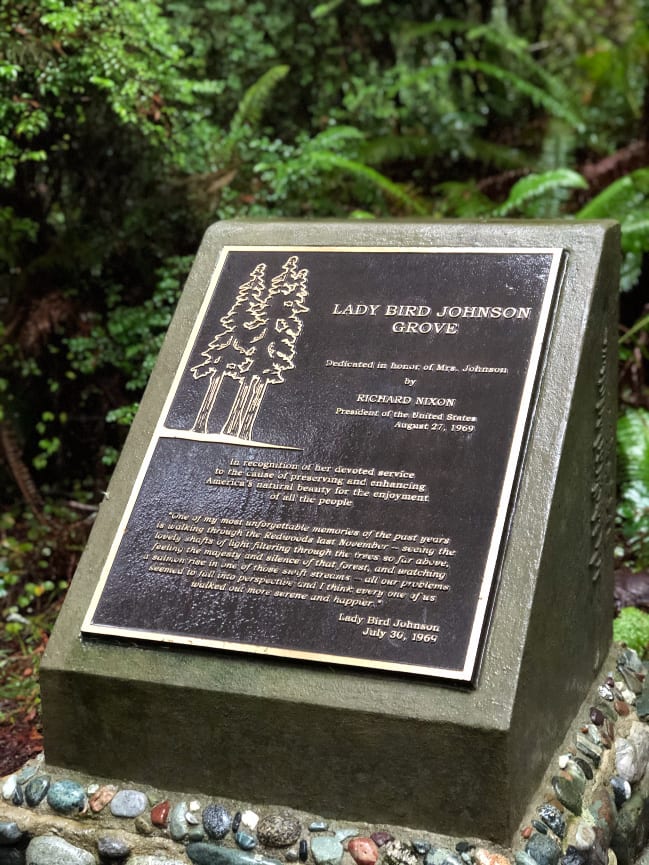 One day in Redwood National Park is not enough, particularly if you want to get serious about the 200 miles of hiking trails. There’s no better way to experience the redwoods, but also the 40 miles of coastline, lagoons and prairies within the protected area. 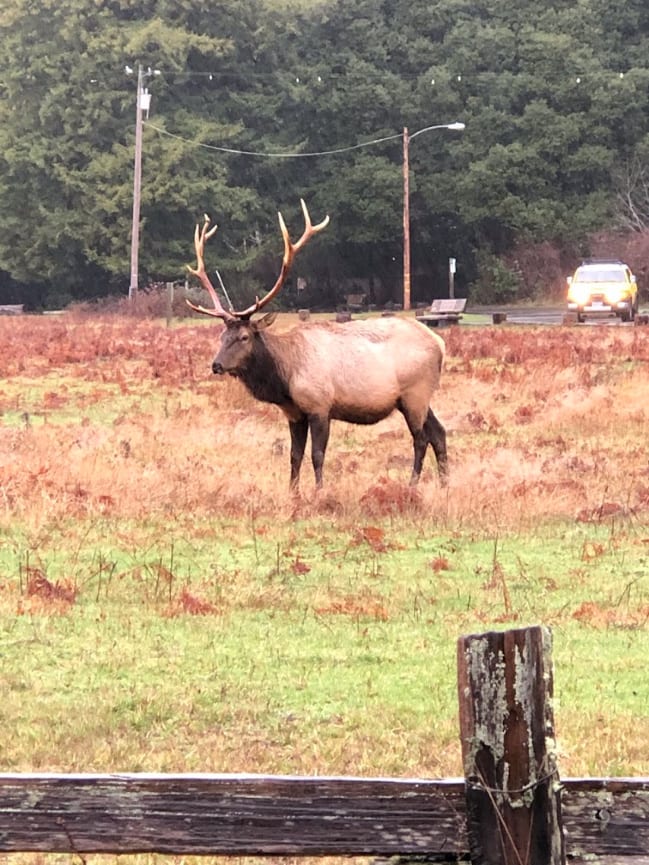 Keep an eye out for the park’s famous Roosevelt Elk, one of the largest deer species in the world. Take care during the rut, or mating season, which happens every fall, as deer tend to be more territorial and on edge at that time of year.

Who would’ve thought that a national park named for trees would be an incredible place to watch for whales?!

If you’re visiting during November/December or March/April, you are in for a treat, as it’s peak migration season for California gray whales. Binoculars are helpful for a real close-up view but not always necessary; you can see spouting spray in the distance.

Pro Tip: If you don’t make it during peak season, stop by the Klamath River Overlook. You may catch a glimpse of a resident group of whales any time of year.

5. Camp in the Forest

I so wish we’d had time (and gear) to spend a night or two in the national park. There are a few campgrounds available for $35 per night, but you do need to reserve in advance. Some of the state parks even have cabins, but they book up quick. Call 1-800-444-7275 or visit Reserve California to make a reservation.

I took a walk in the woods and came out taller than the trees.

When to Visit Redwood National Park

Redwood National & State Parks are open year round and check this out – it’s free to get in! But note that some of the state parks have overnight vehicle fees and some day usage fees in certain areas, so if you’re not sure and want to budget accordingly, do some research before you go.

The park receives less than half a million visitors per year, so compared to some super popular national parks like Yosemite and Yellowstone, it’s not nearly as busy. Certainly on a beautiful July day, you’ll find more people out and about on the beaches and the trails that wind through the redwood forest. We visited on a rainy Sunday in January, so visitors were few and far between. 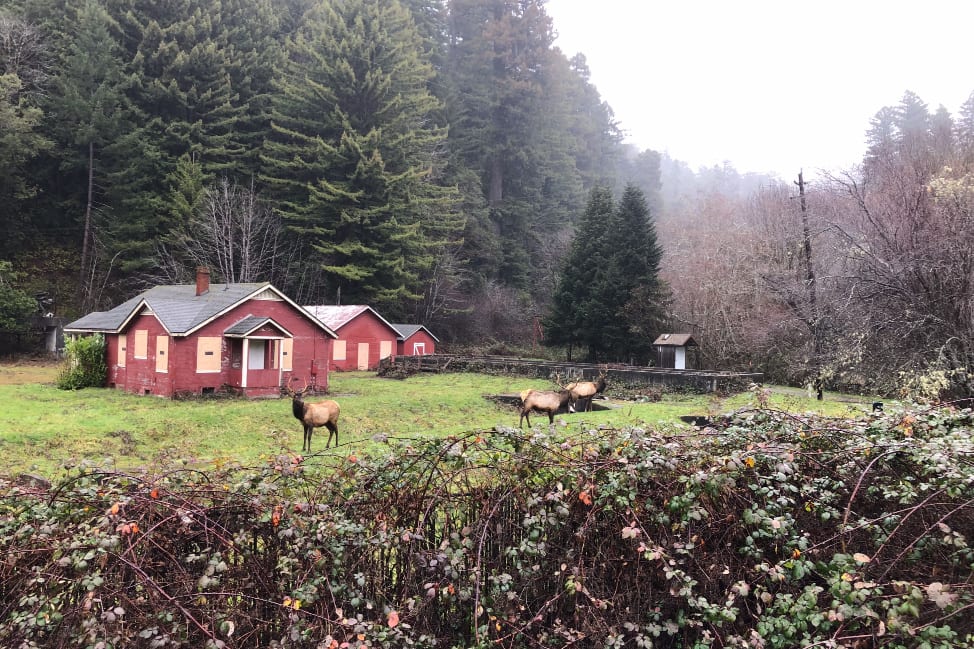 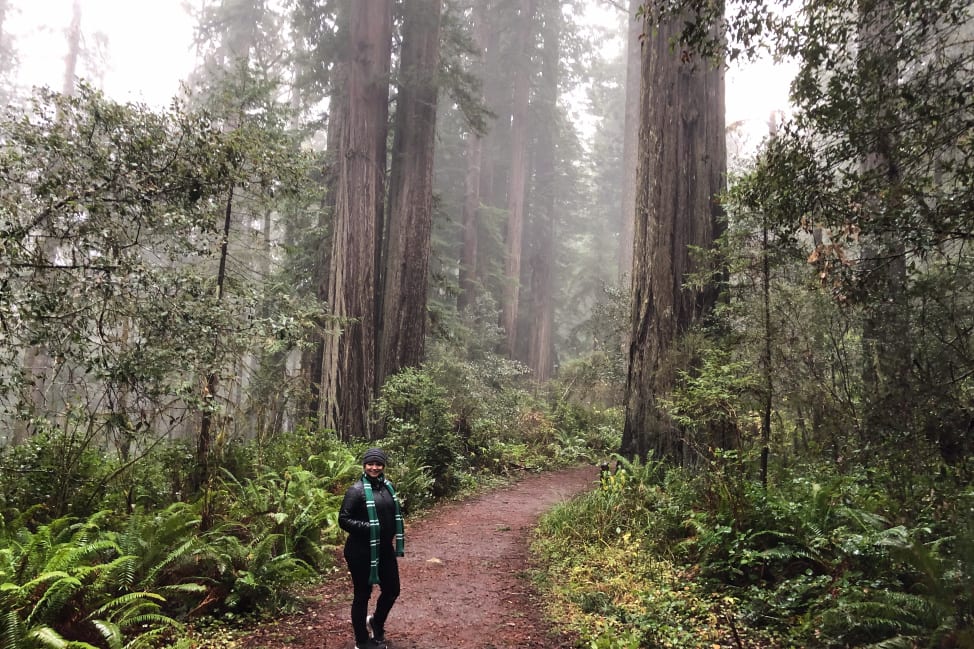 Where else can I see California redwood trees?

If you can’t make it all the way up to Redwood National Park, you do have other options to see redwoods in California, as they can be found from the Oregon border all the way south to the Big Sur area. There are no drive-through trees in Redwood National Park, but you can find one in nearby Klamath, the Tour Through Tree, or further south the Shrine Tree at Myers Flat and the Chandelier Tree in Leggett.

All are run privately and charge a fee to drive your car through. Good luck with that! 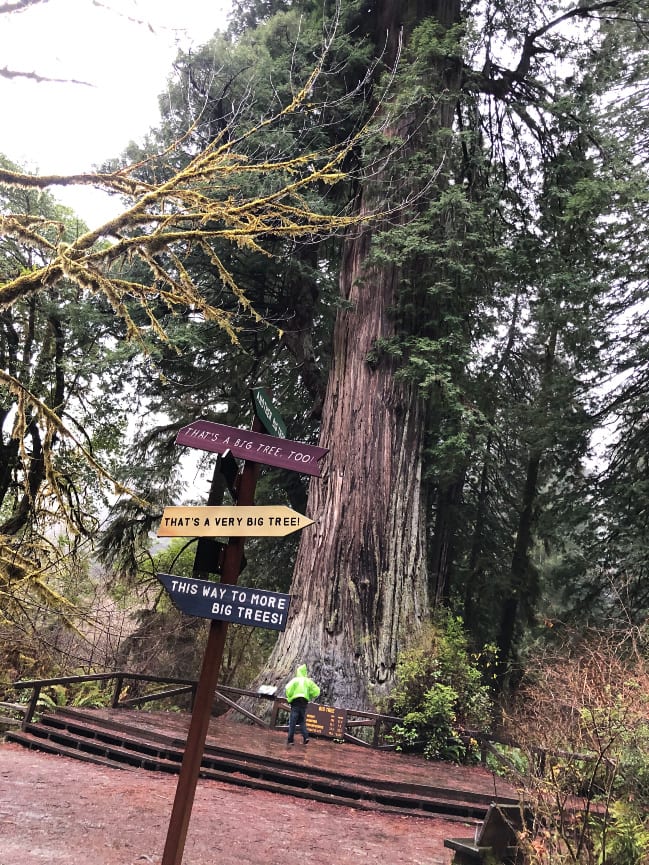 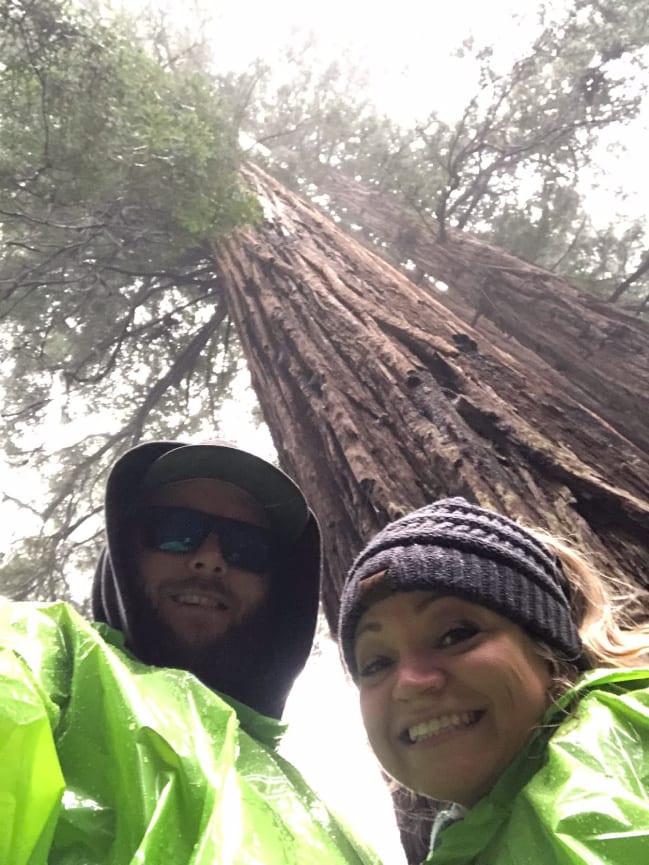 Tell us: is Redwood National Park on your bucket list?