With the excitement of our costumed pursuits at Bath’s annual Jane Austen Festival behind us, you might think we’d pack up our parasols and petticoats and head back to Florida.

But you’d be wrong.

There was one more costume party to attend before leaving the UK, just a few hours’ train journey over from Bath at Highclere Castle.

Never heard of it? Let me jog your memory. 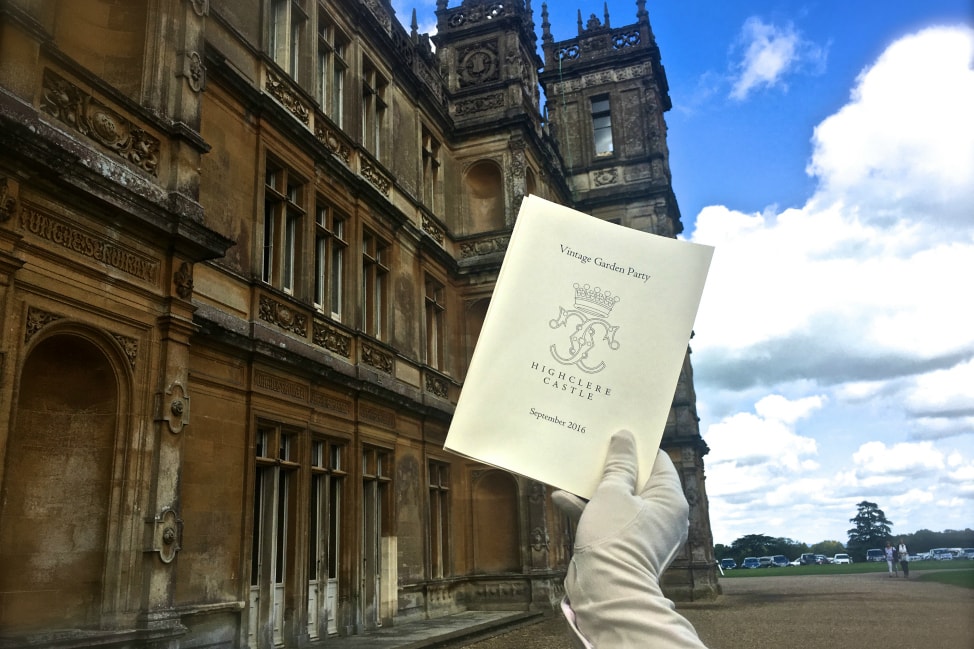 I was obsessed with Downton in its heyday. The polite drama, the upstairs-downstairs intrigue, the historical tie-ins, a super sassy grandma… Theo James! What’s not to love?

Highclere Castle is not only the set of Downton Abbey, but the longtime family home of the Earl of Carnarvon. The Earl (Queen Elizabeth’s godson) and the Countess, his lovely wife Fiona, open the estate to the public for fun events and celebrations every so often. During this time guests can explore some of the rooms where Downton Abbey was filmed and the horde of Egyptian artifacts collected by the Earl’s great grandfather from King Tut’s tomb.

I could not believe how lucky we were that our Jane Austen trip coincided with the estate’s first ever vintage garden party. It’s like every dream of mine came true at once. I almost couldn’t handle it.

There was only one problem. What do you even wear to a 1912-themed party at a glorious estate with real aristocrats, and where do you find these items on short notice?

The moment we were invited to the party, we began the search for appropriate attire. Not surprisingly, pre-Titanic garments aren’t easy to come by in Florida, so we spent considerable time on the hunt for just the right dresses, hats, fascinators, gloves and shoes. (It didn’t help that Ange was in the hospital having her appendix out right about this time…!)

The Internet was of some help, particularly in guiding us toward the right styles. Etsy has some Edwardian dress patterns if you’re good with a sewing machine, but if not, you’re looking at spending about $500+ for a custom frock. If we had more time, we might have sourced something from an online vintage store like Vintage Dancer, Recollections or Sophia’s Costumes, but we just didn’t have the luxury.

Ultimately, we ended up renting costumes from Complete Costumes and Costume Hire Direct, two UK-based companies with huge selections from Edwardian to Elizabethan to Wartime to Jacobean to literally everything in between. And the best part? They deliver to your hotel!

We ordered our costumes about a week ahead of time and thought nothing of it until the day of the event. We woke early, checked out of our hotel in Bath and had several hours to take the train to Newbury, where a modest pub hotel was waiting with our delivered costumes. We’d planned a few hours of primping – I mean, they didn’t have ladies’ maids back in the day for nothing. Getting dressed was the most time-consuming part of the day for noble-born women.

But we’re just bloggers, and of course nothing went according to our carefully crafted plan. Our train was delayed en route so by the time we arrived at the hotel, we had less than 15 minutes to transform from frizzy-haired traveling vagabonds to polished ladies worthy of an invitation to Highclere Castle. 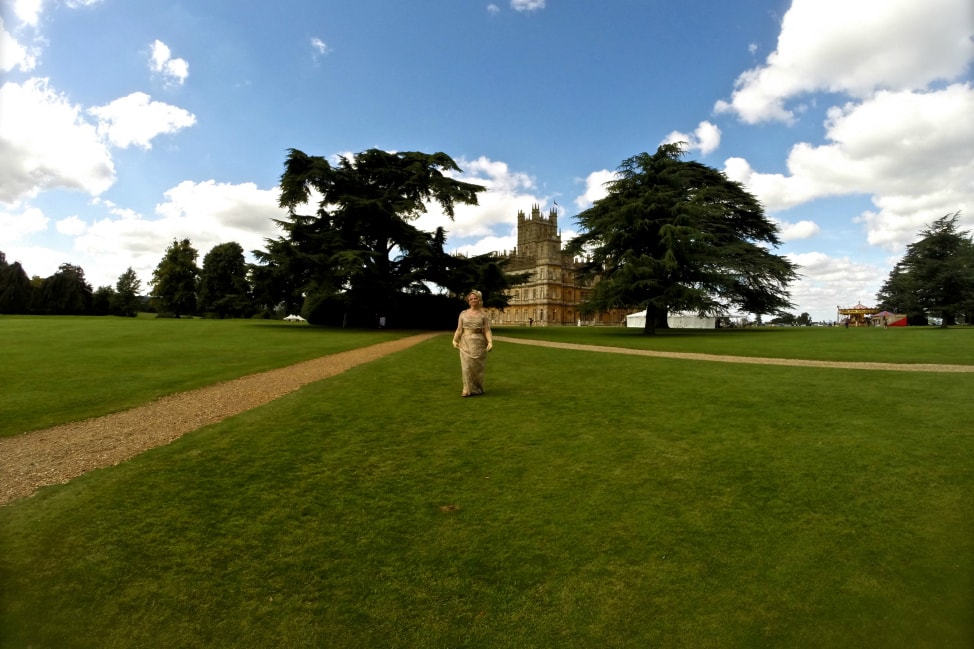 Upon arrival, we tore into our costume packages. Angie’s gold and lace dress fit fine and looked lovely. Mine, on the other hand, did not.

I’d chosen a simple blush dress, so you can imagine my surprise when I opened the bag and found a hot pink mess that was more Renaissance Fair than Downton Abbey.

I put on the dress and tried not to weep. Angie consoled me. “It’s not that bad, it’s fine!” Later she admitted that it was in fact a mess. We were so rushed, we didn’t even have time to take photos of the offending garment. It didn’t matter though. I couldn’t show up in a dress from 1512 at a 1912 party. Can you imagine the looks I’d get?! I could just hear the Dowager Countess’ voice in my head, shaming me for showing up inappropriately dressed.

I was going to have to wear jeans to the most wonderful party I’ve ever been invited to. Ripped jeans at a castle with actual lords and ladies.

And then, my sweet, heroic sister pulled out a backup dress she found, just in case our ordered costumes didn’t fit. 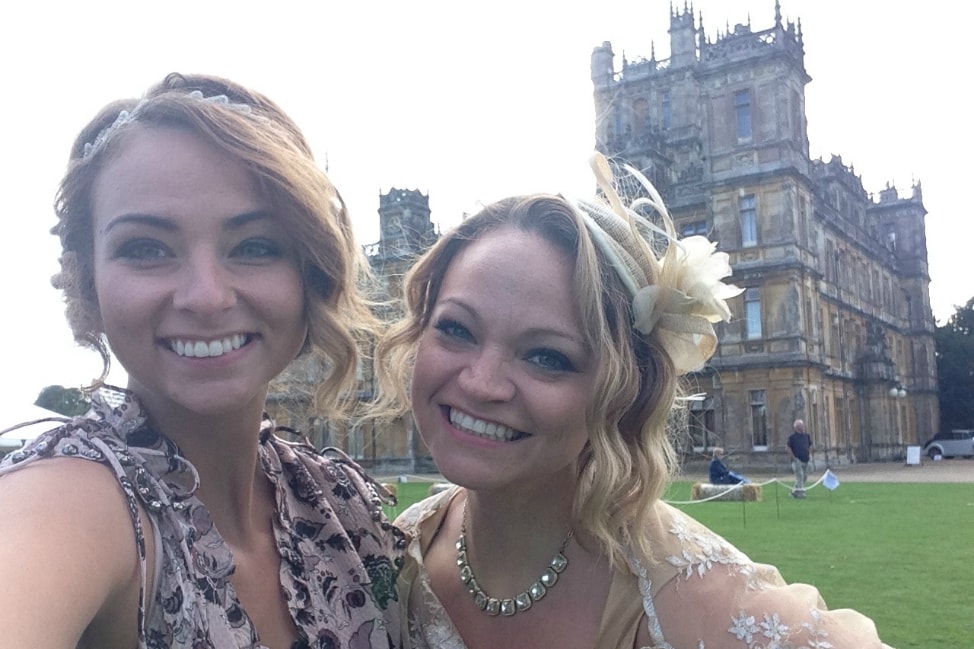 I slid it over my head – a perfect fit! The cab driver called just then to say he’d arrived.

Omg my hair, my makeup, what shoes will I wear?

We grabbed a big bag of accessories and hopped in the cab, where we proceeded to panic all the way to Highclere. “We’re going to a vintage garden party at Highclere,” we told the driver. He seemed confused as we slathered on makeup and fussed with our hair.

As flustered and rushed as we were to get to the party, the moment Highclere Castle came into view, we went right back to 1912 and became landed ladies instead of pub crawling townies. 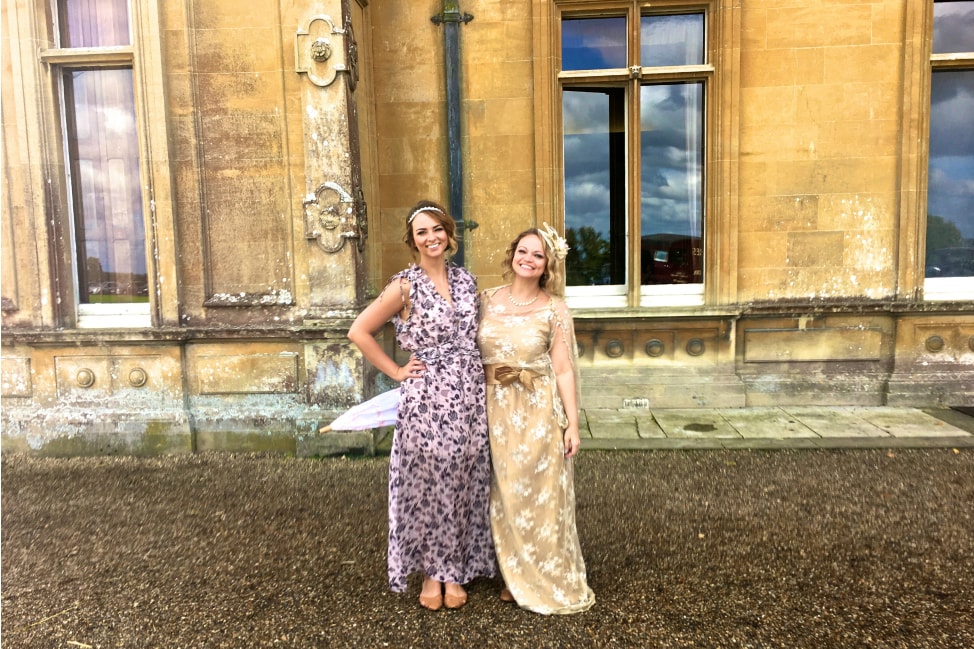 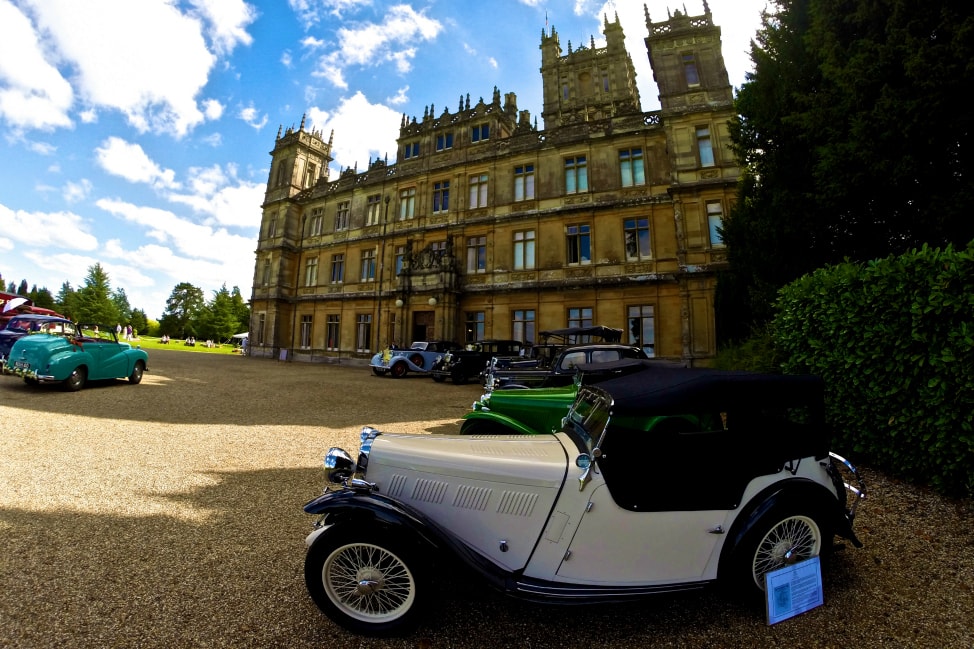 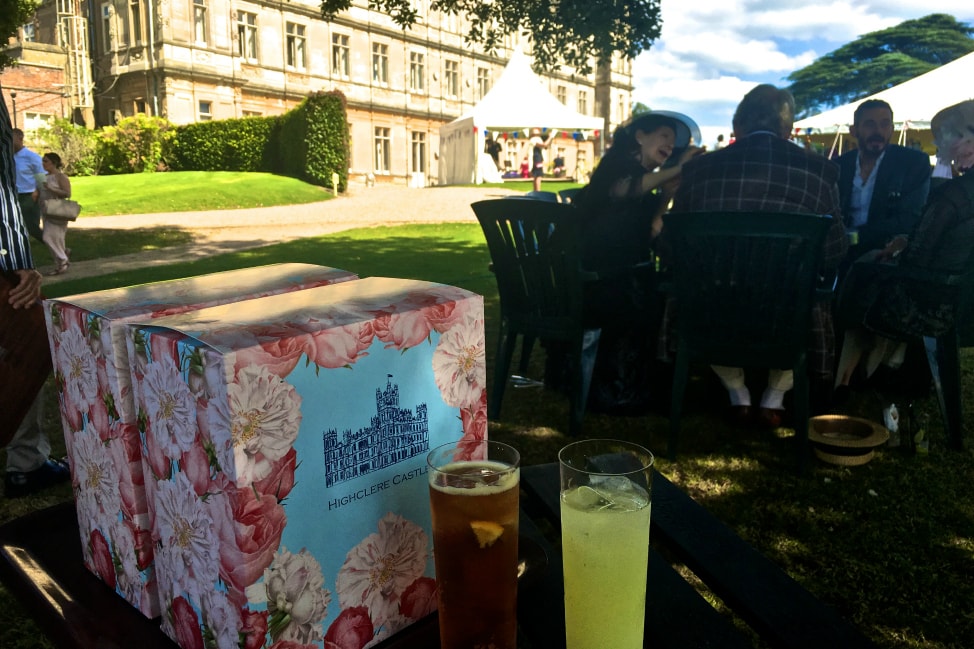 I felt transported back a century. I stood up straighter and walked like a lady.

We really pulled our looks together at the last second, but some of the other guests absolutely rocked it. Check out these gorgeous, costumes by our fellow party-goers. Some were hand-sewn! 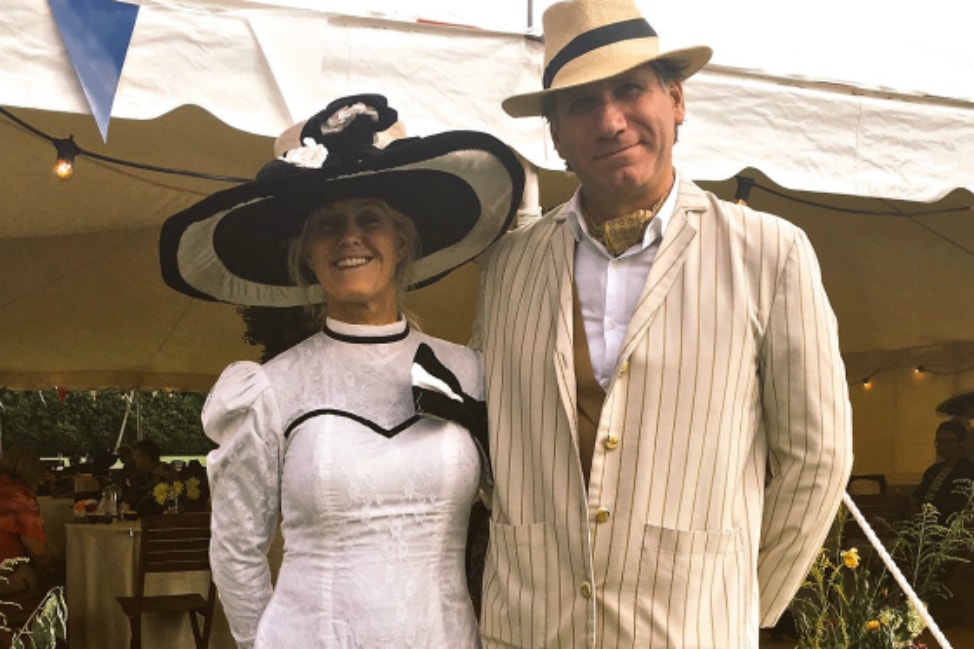 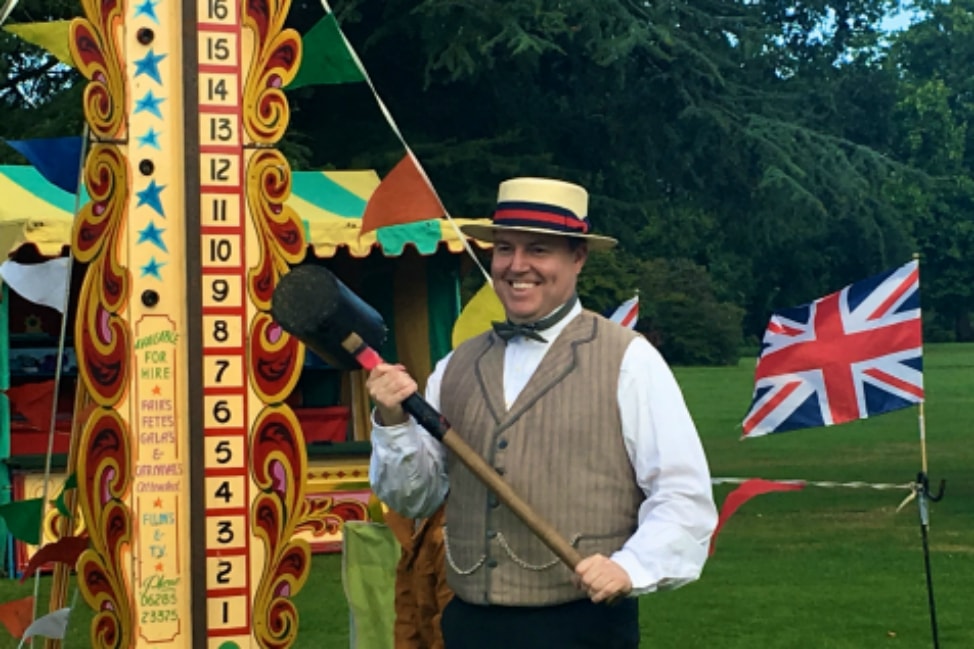 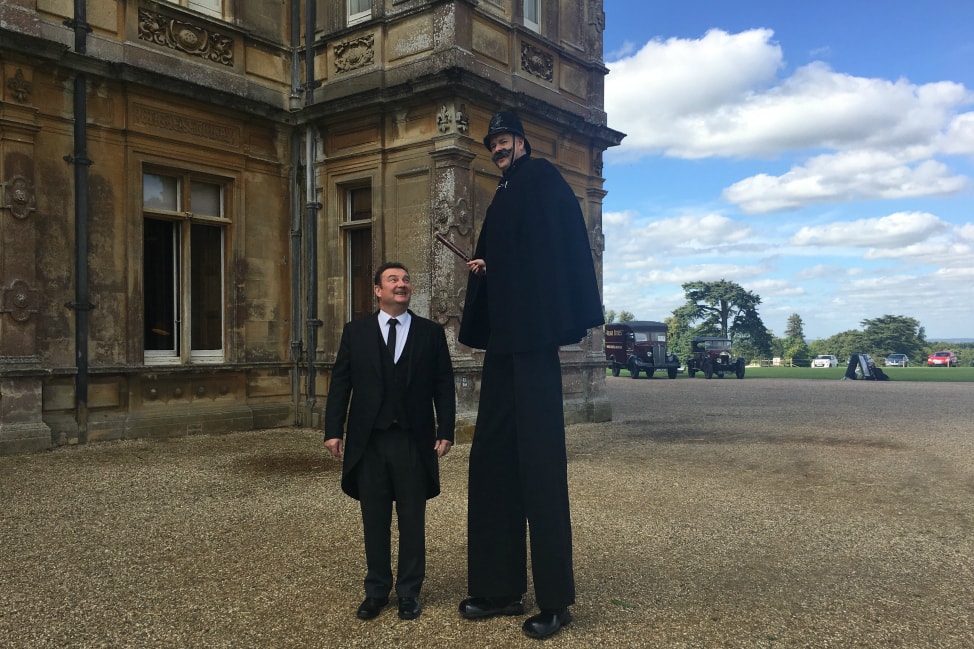 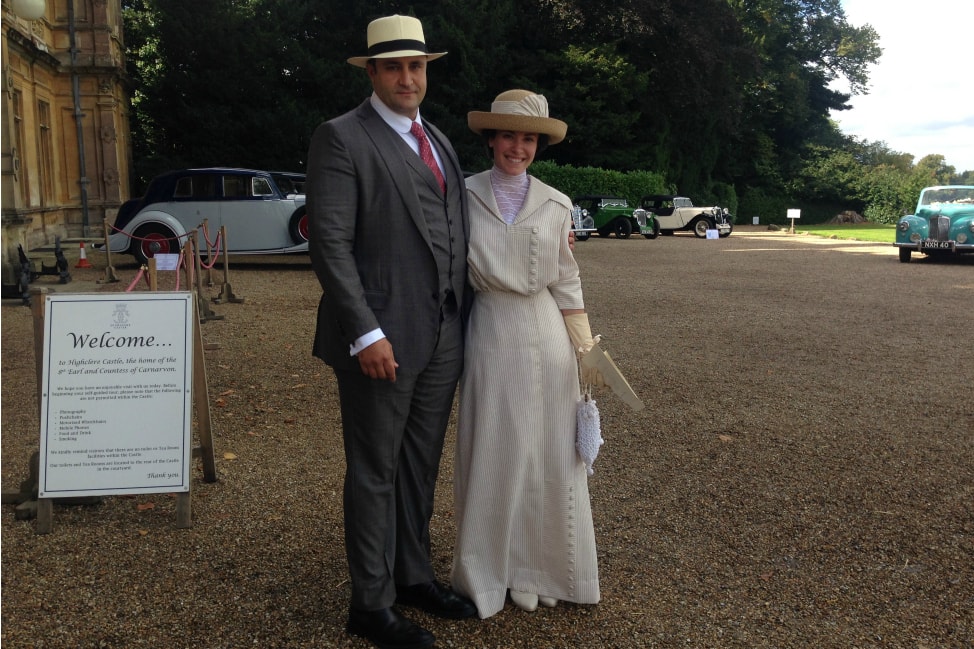 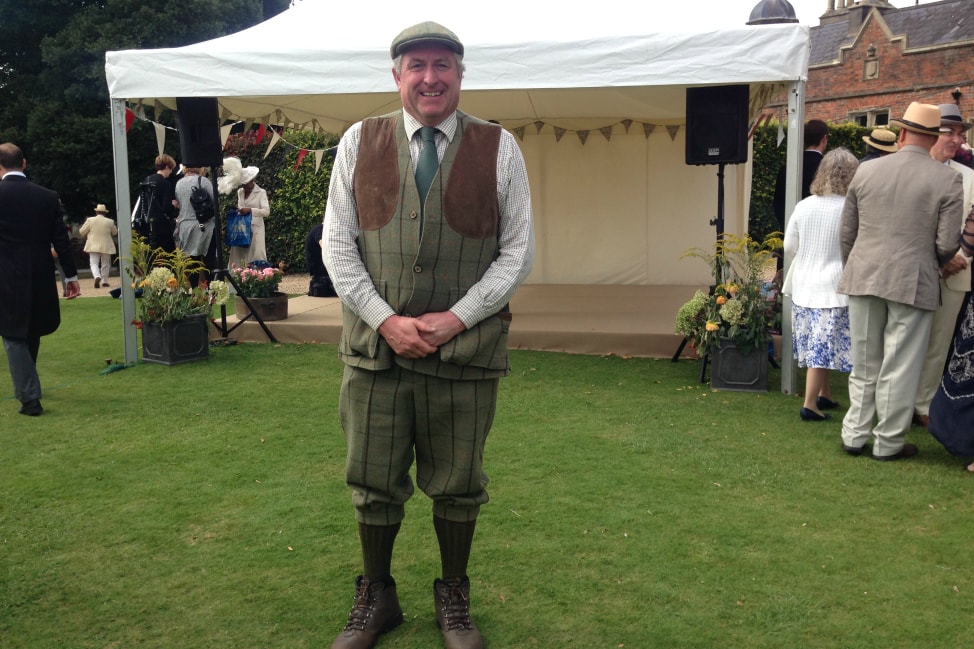 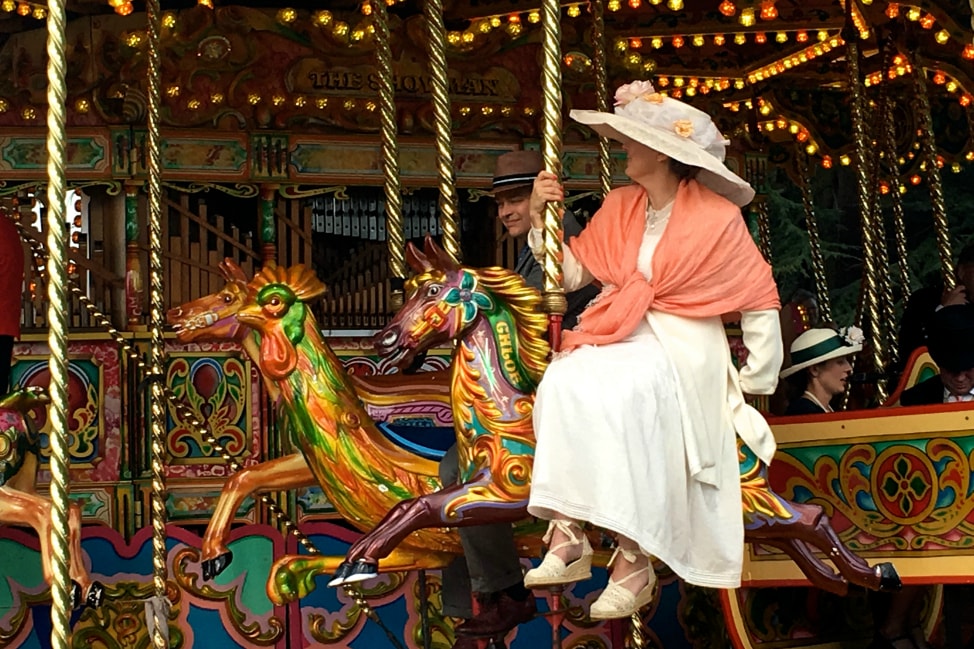 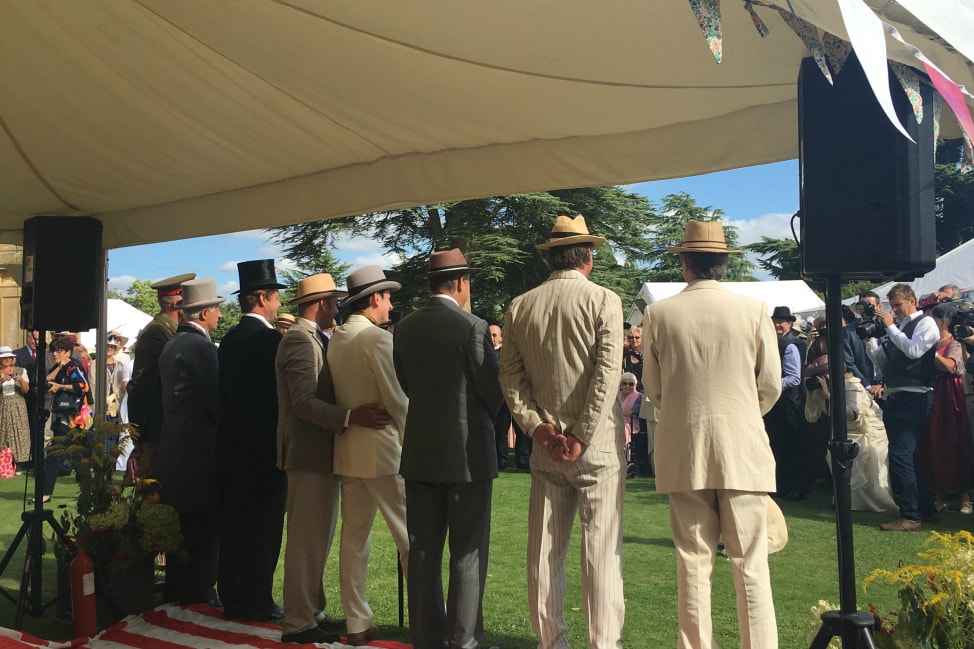 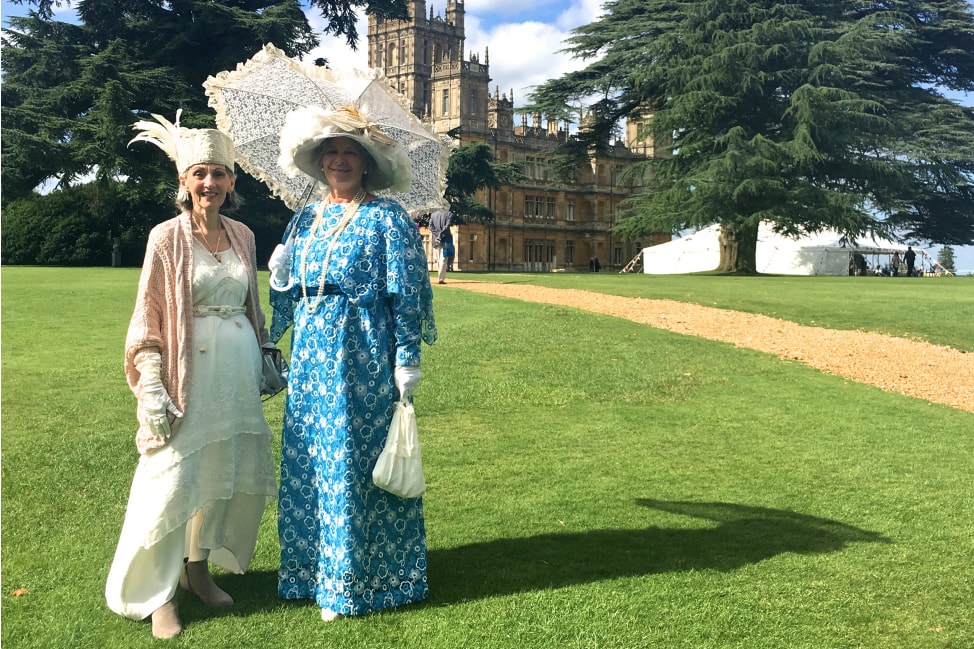 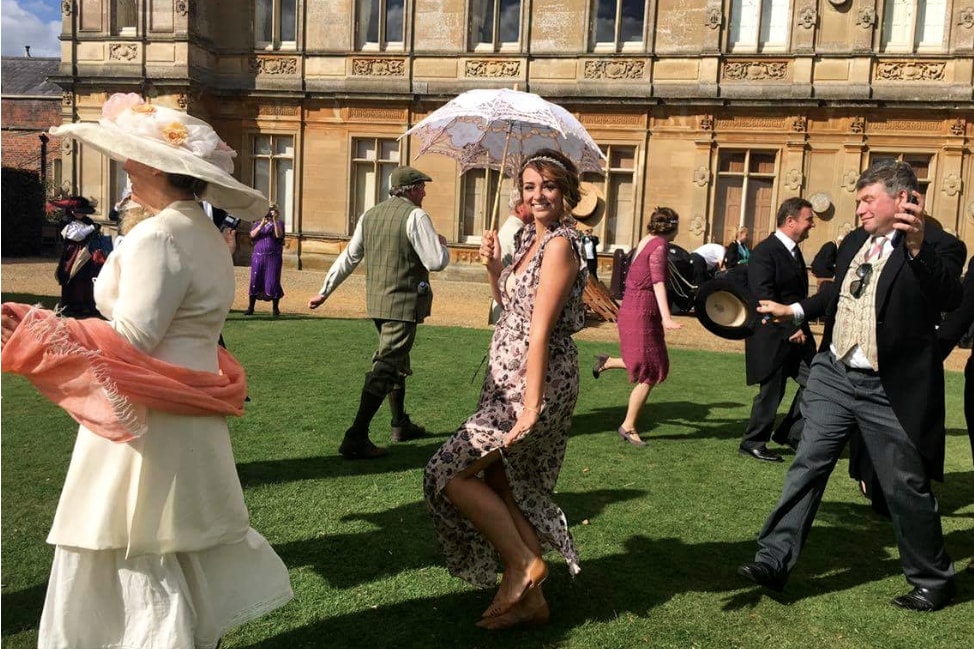 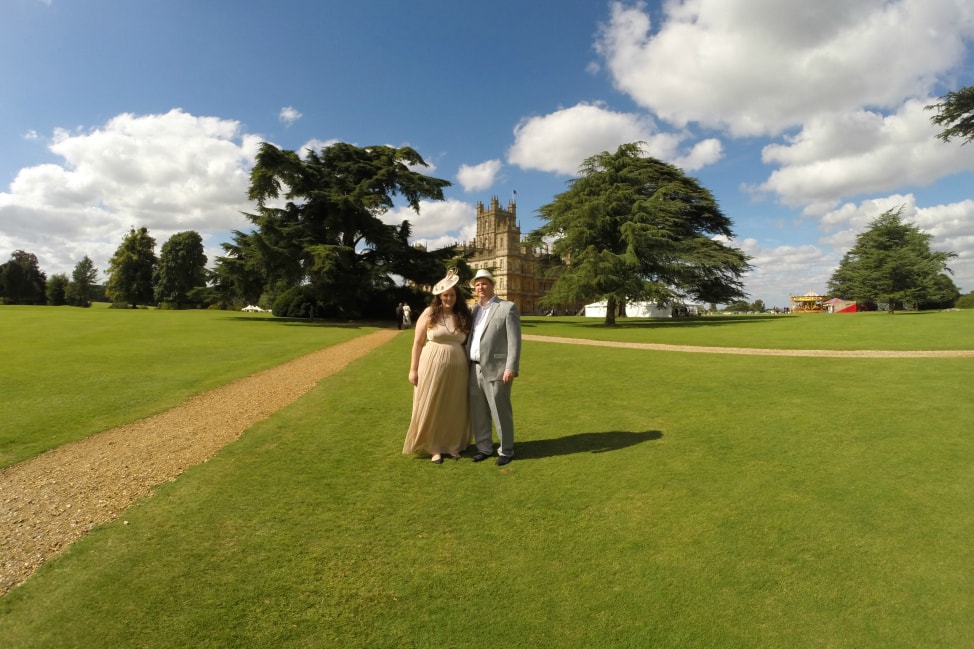 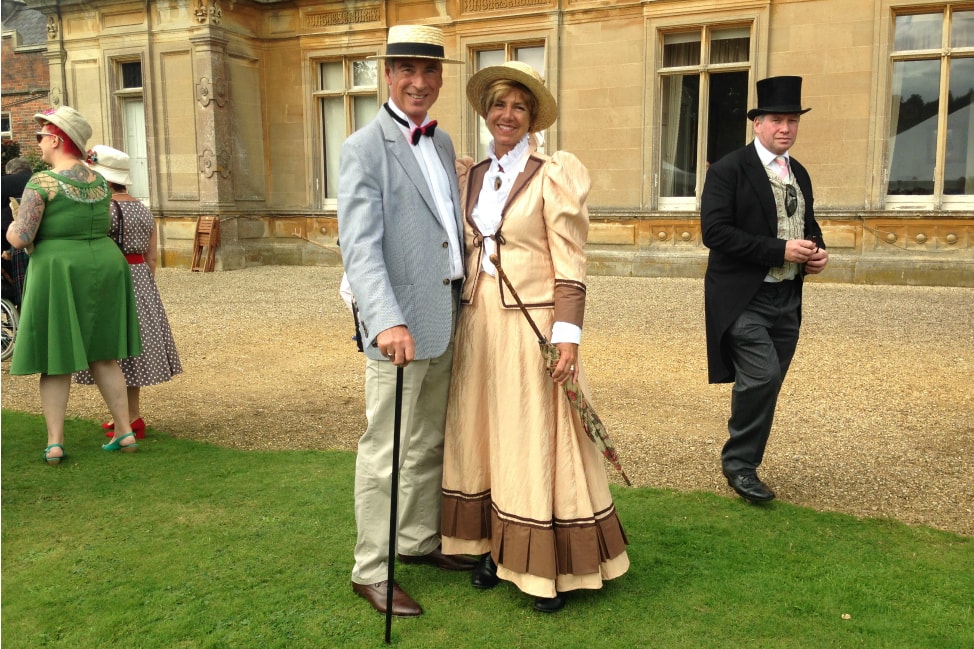 Pro tips for the next time you’re invited to a vintage garden party at a stately English home:

Tickets to Highclere Castle and upcoming events can be found here. 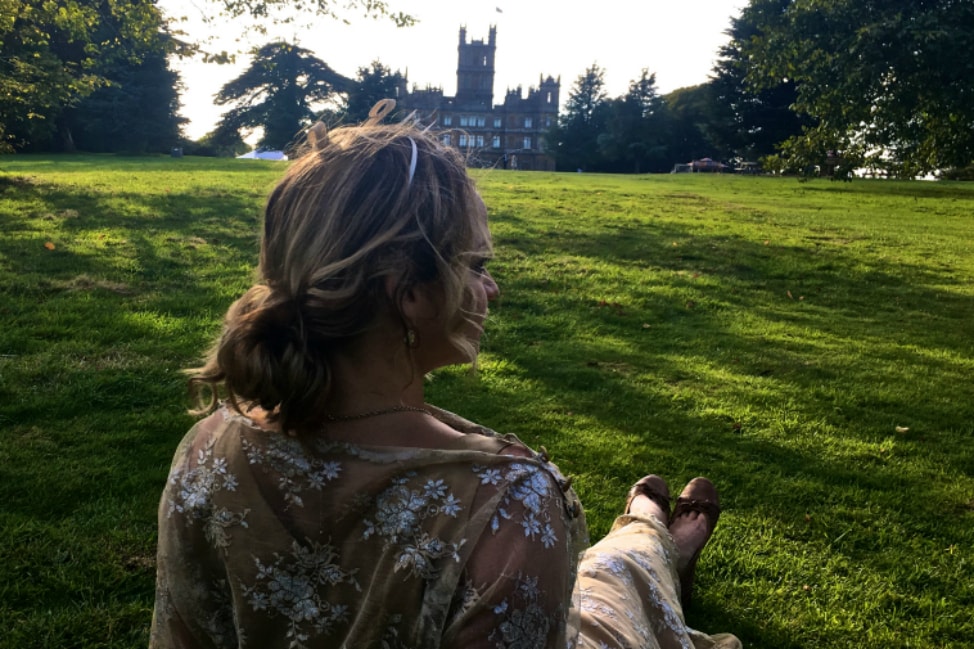 Are you a big Downton Abbey fan? What do you think about costumed travel? We love it!

Our visit to Highclere Castle was in partnership with Visit Britain. All #OMGB moments, opinions and photos are my own. Special thanks to Alex Popplewell and Lord & Lady Carnarvon for making all of our Downton Abbey dreams come true. Images on this page are copyrighted and may not be used without express written permission.

PIN ME FOR LATER! 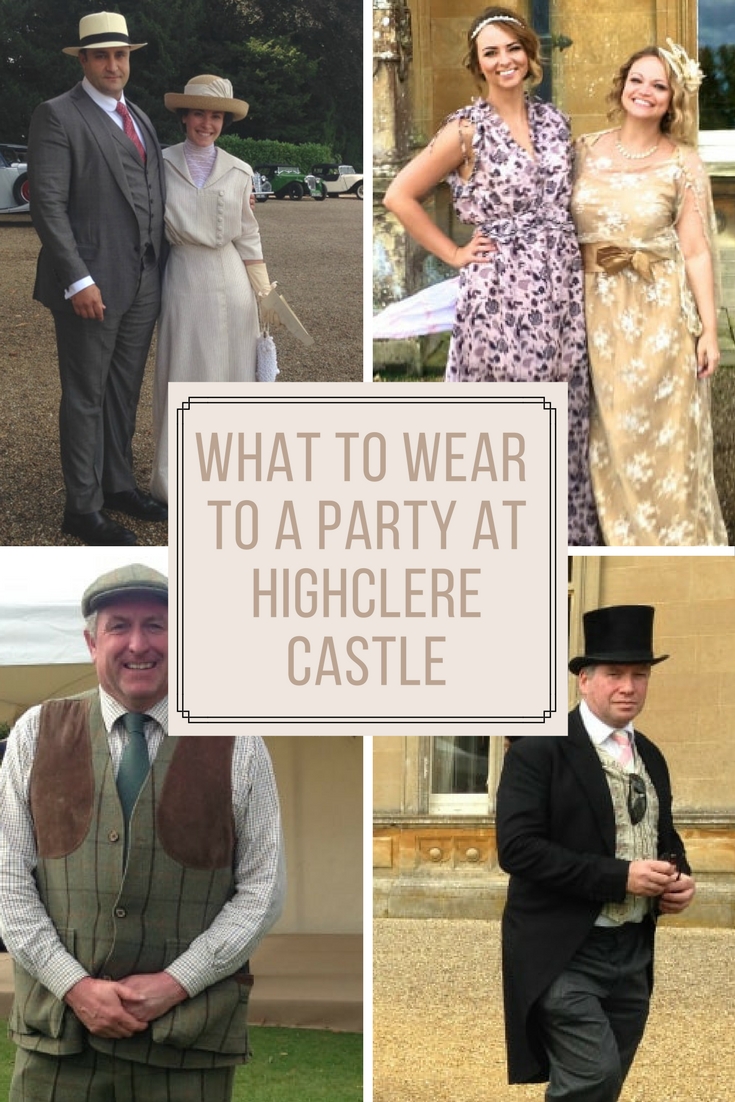 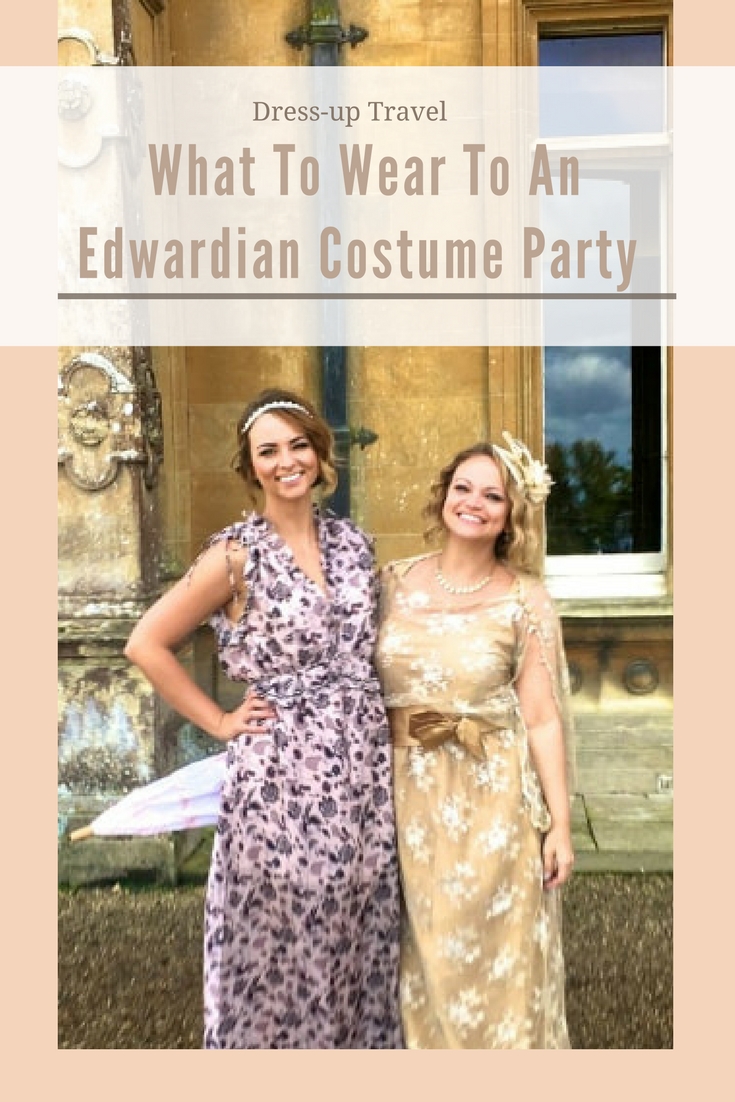