When I told you guys I was heading to Bonaire over and over on social media folks asked me, “Where the heck is Bonaire?!”  With only 60,000 visitors per year, Bonaire is certainly one of the Caribbean’s least visited destinations… and if we’re being honest, those are always the best ones, right? 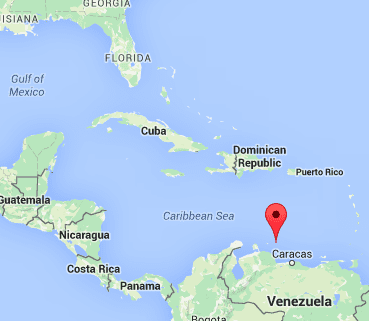 Bonaire is part of the Dutch Caribbean, a handful of island nations that once comprised the Netherlands Antilles. In 2010, the Netherlands Antilles dissolved, reorganizing into another colonial-yet-independent system I understand in absolutely no useful way. Aruba, Curaçao and Sint Maarten are known as constituent countries; Saba, Sint Eustatius and Bonaire are considered special municipalities within the Dutch Kingdom. Clear as mud, right?

None of that matters unless you live there. Visiting Bonaire is like traveling to any other country – you go through customs & get a brand new passport stamp. YAY!

While I sort through the 1,500 pictures & video clips from my glorious, adventurous girls’ week on Bonaire, I thought I’d kick off my coverage with a quick primer – 6 words you need to know before you visit this wee island off the coast of Venezuela.

I’d never heard anyone speak Papiamentu before my visit to Bonaire, and for good reason – it’s a Creole language you’ll only find in the ABC islands; Aruba, Bonaire and Curaçao. (Editor’s note: No matter what your research shows, it matters a great deal to folks if you spell Papiamentu with an O or a U at the end. If you don’t want to incite a war, better add a U to the end instead of an O. Unless you’re on Aruba, in which case you spell it with an O. Have changed my spellings to avoid further offense!)

To oversimplify what is certainly a complex language with influences I can scarcely begin to understand in a week, Papiamentu is essentially a Romance Language mash-up with East African roots. If you have a decent handle on Spanish, French or Portuguese, you can probably wing it with the locals in the ABC Islands.

To me, Papiamentu reminds me of how Americans sound when they are first learning to speak Spanish.  I guess because I speak some Spanish, my brain wants to pick out similar sounding words but they’re about 2 steps to the left of what I expect.

Aside from Papiamentu, the common, colloquial tongue, there are three other languages spoken on the island. Dutch is the official one used in government interactions, and English and Spanish are widely used as well.

If you think the Caribbean is all lush rainforests and green mountains like parts of the Dominican Republic and Puerto Rico, Bonaire will surprise you around every dry, dusty road. And since Bonaire is most famous for its underwater environment, it can be quite a shock to new arrivals like me, who forgot to read anything about the above-water topography. Face palm.

Surprise, surprise, Bonaire is a limestone island, essentially a porous reef system pushed out of the sea by ancient volcanic activity. Today it’s dotted with kadushi cactus up to 30 feet tall across a mostly scrubby, parched landscape.

Kadushi with a K grows all over the island, but to see forests full of them, we took a Roadrunner Bonaire Twizy car tour of the north. Starting in Kralendijk, we made our way past more spiky cacti than I’ve ever seen in my life to the colorful town of Rincon, home to the Cadushy Distillery.

Cadushy with a C is the distilled, boozy version of the night-blooming kadushi cactus, lovingly known as the Spirit of Bonaire. The liqueur is tart & refreshing, and widely available in signature cocktails all over the island.

The Caribbean is one of my favorite regions in the world, particularly because I love trying to piece together each island’s convoluted history. The Spanish, including good old explorer Amerigo Vespucci, rocked up to Bonaire in 1499, but saw only poor soil quality and seemingly useless shallow pools near the south shore. They took all the Arawak Indians who lived there and moved them to the D.R. to work as slaves in the copper mines.

About 135 years later, the Dutch had a stroke of genius when they seized arid Bonaire from the Spanish and immediately began producing valuable salt in the shore pools. As salt water sits in the ponds, the sun and wind evaporate the water, leaving behind crystallized sea salt – just what the whole world needed to preserve food in a time before refrigeration.

Similar to sugar cane in St. Kitts, salt production became the main industry on Bonaire. Slaves were brought from Africa to work in the salt pans; at night, they slept in stone huts that you can visit today.

While slavery was abolished in 1863, the salt pans are still in use. Nearly 400,000 tons of industrial-grade salt are produced on Bonaire each year and shipped all over the world.

While salt is the king of industrial exports on Bonaire, the major tourist draw is scuba diving. Thanks to the world-renowned Bonaire National Marine Park, a protected zone surrounding the entire island, 300 species of tropical fish and 120 different types of coral flourish, making Bonaire one of the top diving destinations in the entire world. You don’t have to be a diver to enjoy Bonaire, but it sure does add to the experience.

With a hundred or so dive sites, many you can easily access from shore, there’s no place like Bonaire for self-service dive action. Dive operators are plentiful for those who like to scuba with a safety net — ahem, me! Check out Divi Flamingo Beach Resort and Buddy Dive Resort to get a comprehensive diving, vacation & culinary experience while on-island.

For the most adventurous and least populous dive on Bonaire, book a day with East Coast Diving.  For the most luxurious dive experience you could ever hope for, reserve a private day with the dive butlers at VIP Diving.

From a bright pink “bon bini” at Flamingo Airport to the real, spindly legged deal at Gotomeer saltwater lagoon near Washington Slagbaai National Park, Bonaire is one of the few places in the world where you can find iconic pink flamingos in the wild and on local license plates.

If someone shouts “Hey, dushi” (doo-shee) at you while you shop in Kralendijk, don’t be offended. You’re a sexy sweetheart, not a D-bag.

Now that you’ve learned all about flamingos, scuba diving, Papiamento, salt, kadushy, cadushi and dushi, you’re ready to pack your dive gear and book a trip to Bonaire.

And stay tuned, I have many more posts & photos to come! Hope you like fishies…

Thanks to Bonaire Tourism for hosting my visit. All opinions are my own.

13 thoughts on “Bonaire in Six Words”