Remember when travel was about more than getting from Point A to Point B in a holy hurry?

But way back before modern aviation, it took quite a while to get anywhere, either by ship or caravan or steam locomotive, and as such, the journey was as much a part of the adventure as the final destination.

Unlike my Bohemian ancestors who spent weeks on a ship immigrating to the U.S. in the early 1900s, most of my journeys are speedier and thankfully less fraught with peril. While the decreased peril is a grand improvement, I still rarely enjoy the act of transit as I’m jaunting from airport to airport.

But recently onboard the Rocky Mountaineer train, I experienced a slow, deliberate and pleasant journey from Vancouver to Banff, something I was beginning to think was impossible. I have much to say and many pictures to share from the trip, but for now, here are 5 reasons to book a Rocky Mountaineer itinerary ASAP!

It’s the 25th Anniversary. The Rocky Mountaineer is a luxury Canadian rail journey that’s served nearly 2 million guests since 1990. A few months ago, I was invited to participate in the 25th season’s first journey from Vancouver to Banff, and after riding the rails through some of Canada’s most breathtaking and hard-to-reach spots, I am a dedicated fan of the brand.

The train travels only during daylight hours and stops each night in destinations like Whistler and Quesnel. My Canadian itinerary had me traveling from Vancouver to Banff so my overnight was in Kamloops, an adorable frontier town with farm-to-table restaurants and the best fried pickles I’ve ever had at the Noble Pig brewery. More about Kamloops & Banff later!

It’s cooler than anywhere else in the Northern Hemisphere. It’s baking hot from the Caribbean to New York City right now, so just as many book it down to Aruba during the annual Snowpocalypse, it makes sense to do the same in reverse in the summer. As a native Floridian, I’m used to boiling from April to October (the Rocky Mountaineer’s season, coincidentally). Making the trek up to Canada during the hottest months is a great way to cool off and get a literal breath of fresh, clean, anything-but-humid, mountain air.

Food is an integral part of the journey. Breakfast & lunch were surprisingly fresh, varied and plentiful, especially considering we were cruising along on a train in the wilderness most of the time. The adventurous menu highlights local ingredients, like berries from British Columbia, Pacific salmon and Canadian wines, and the selections change daily.

In between the hearty meals, there are snacks, cheese plates, homemade scones and an open bar. It’s legitimately over-the-top – and I liked that part very, very much.

It doesn’t get much swankier. If you are planning a Rocky Mountaineer experience, save as long as you have to so you can splash out for the ridiculously plush Gold Leaf service. I can’t say that I’ve ever had a journey go so smoothly, from on-time departures to a never-empty glass (or belly) to hands-off luggage service.

I never had to drag my suitcase on and off the train, or even to my hotel! It was always delivered directly to my room before I arrived, ready and waiting when I made my way to bed each night. Is it crazy that the luggage delivery was one of my favorite parts of the whole experience?

Canadians are soooooo nice. And isn’t it so nice to be treated nicely while traveling?

ROCKY MOUNTAINEER HOST: “Oh, I’m sorrrrrrry. Of course! Need a blanket, a pillow? A sandwich? Another scone? A platter of fresh-churned butter? How about a neck massage?” (Ok, it didn’t go that far, but it wouldn’t have surprised me.)

Rocky Mountaineer Hosts are like fancy camp counselors for most magnificent grown-up camp you could ever go to. They are engaging storytellers, sharing details on everything that passes by outside the massive domed-coach. They expertly spot bears and other hard-to-see creatures and narrate the journey almost constantly, so while it’s a ton of information to process, it’s rather pleasant to have story time as you zip through the Rockies. 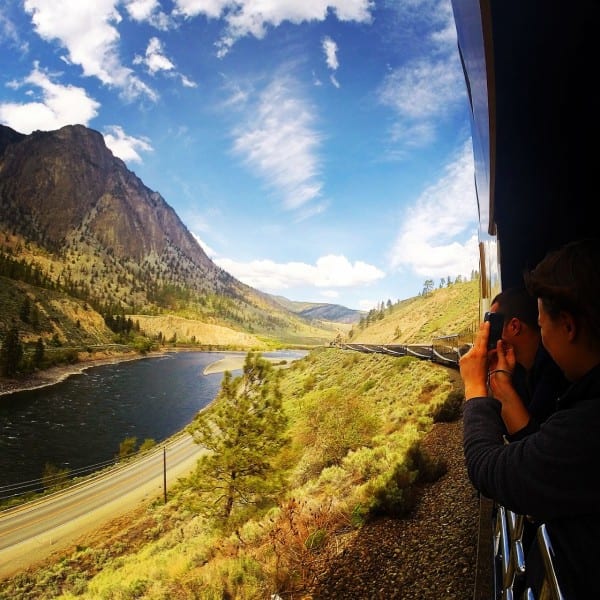 Like I said, I have many more stories to tell from my time on the Rocky Mountaineer, but for now I’ll just leave you with my heartiest recommendation to book that journey now!

The Rocky Mountaineer hosted me on the inaugural 25th anniversary journey. As always, all opinions presented on AngieAway.com are my own.

8 thoughts on “All Aboard! 5 Reasons to Ride the Rocky Mountaineer Now”