It was a day of firsts for this weary traveler:

I was in Vancouver primarily to celebrate the 25th anniversary of the Rocky Mountaineer, a luxury train adventure touted as a “life-changing experience,” but before departing the coast for the Canadian Rockies onboard the iconic locomotive, I had a couple of days to explore one of the world’s most enviable cities to live in.

I very nearly rented a bicycle to explore Stanley Park, but who was I kidding? Since I’m actively trying to stay out of the hospital in the months leading up to my wedding, I decided instead to get into the Rocky Mountaineer luxury mindset with some pampering…

…you know, for research purposes. 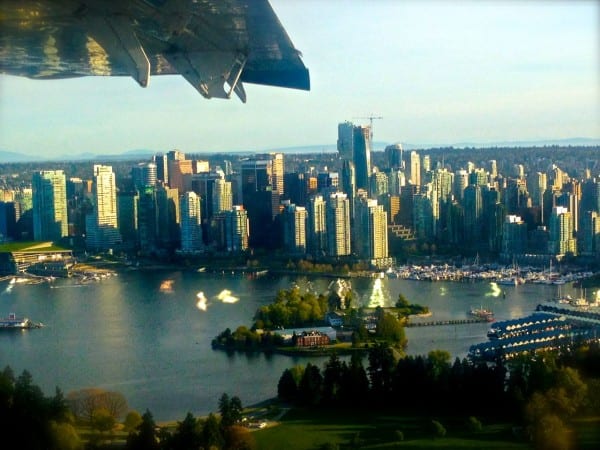 I don’t know about you, but the best way I’ve know how to fight the jet lag is with a little rejuvenating spa time, so I began my picture perfect day of luxuriant lounging at the sleek and modern Fairmont Pacific Rim, where the Willow Stream Spa overlooks the waterfront and the distant mountains from five stories up.

It was an idyllic spring day, sunny and in the mid-60s. I hear Vancouver isn’t always so balmy or dry, so I donned a fluffy bathrobe and soaked up the sun & the sea breeze in the cozy loungers on the spa’s terrace. Even though I was technically in the heart of busy downtown, something about observing it all from five stories high while snuggled with a book, a blanket and an outdoor fireplace made the hustle around me seem strangely serene.

In between hot tub dips and mini-naps in the sunshine, I had a Coastal Mountain Body Wrap — a massage with a very Canadian twist. First, the therapist coated me in thick, sweet maple butter before wrapping me in warm towels to bake like a Thanksgiving turkey. While I cooked, she massaged my scalp and shoulders until I was little more than a puddle of relaxation. She unwrapped me for a final full-body massage with maple lotion, and I left just as soft and sweet as a bottle of 100% Canadian syrup. (Minus the stickiness!)

Surprisingly, all that napping and maple massaging at the Willow Stream worked up a hearty appetite, so a visit to the Fairmont Empress for fancy Afternoon Tea was in order. 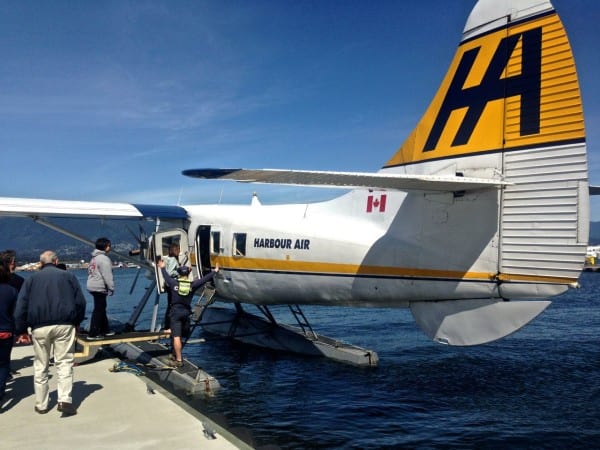 Just a few minutes’ walk from the Fairmont Pacific Rim is the Vancouver Harbour Flight Centre, home to Harbour Air Seaplanes. I’ve been on many small planes in my day, but never a seaplane – how exciting! We took our very snug seats and a friendly Canadian guy (I mean, obviously) gave me the window seat since I had three cameras in my lap, and we began our taxi out to the watery runway.

Minutes ticked by and we still weren’t taking off, and then we turned around and went back to the dock. The pilot announced there was a disconcerting rattle he didn’t like the sound of and after saying “soooorrrry” a few times, he hopped out to have a look.

After a minute of tinkering, he said, “I found the source of the rattle. Nothing I can’t fix with a flathead screwdriver. Sooooorrrry for the delay. I’ll be right back.”

He fixed us right up and in no time, we were soaring over the sparsely populated islands on the way to Victoria. 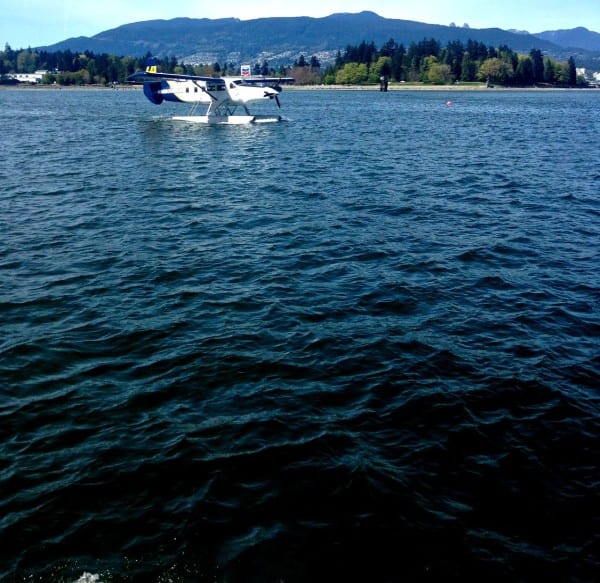 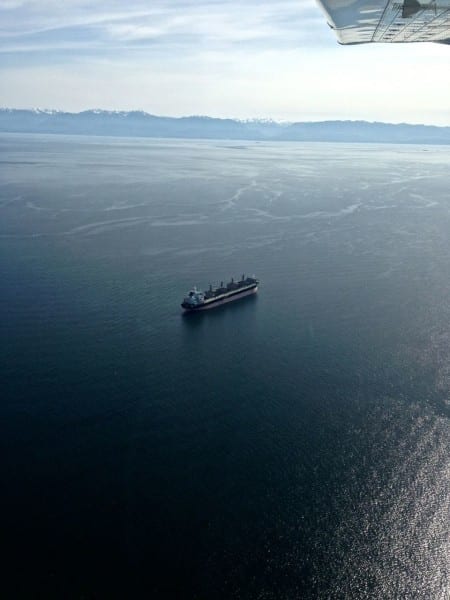 Even though it was a quick 30-minute flight, the hum of the seaplane’s engines lulled me right to sleep. I felt badly about it because the nice Canadian guy had given me the window seat so I could snap photos the whole time, and I was mostly using it to prop up my snoozing body. I kept one eye half-open, just in case I could spot whales below, but mostly I just hallucinated about maple butter. 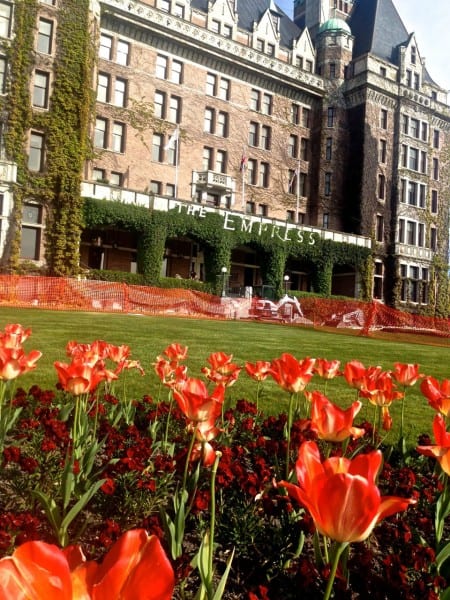 We landed safely at the seaplane terminal in Victoria’s inner harbor, and meandered over to the The Fairmont Empress Hotel, regarded by Travel + Leisure as one of the 500 Best Hotels of the World.

The property has been a local landmark since 1908, welcoming royalty like Queen Elizabeth II, Princess Margaret, the Queen of Siam, the Empress of Japan and now, little old me. (Think they’ll change the website to reflect my visit?)

Afternoon Tea at the Empress is a beloved institution in Victoria, something you absolutely must do if you visit. For more than a century, the tea lobby has hosted celebrities, dignitaries and even bloggers, serving up 500,000 cups of tea annually as original portraits King George V and his wife Queen Mary preside over the stately room.

Antique tapestries, rugs and furnishings complement the space overlooking the harbor, but as you can imagine, the real star of the show is the generous spread of treats! Hand-made signature scones, strawberries and fresh whipped cream, pastries and sweets use local ingredients, including honey from the hotel’s own bee colony.

You can choose the original blend of Empress Tea or choose from others, like the Kea Lani Orange Pineapple tea – so delish, even if you’re not usually a tea sipper.

Some 5,000 delicious calories later, I took a slow meander around Victoria’s inner harbor, and then hopped back on the same seaplane for the quick zip back to the city. 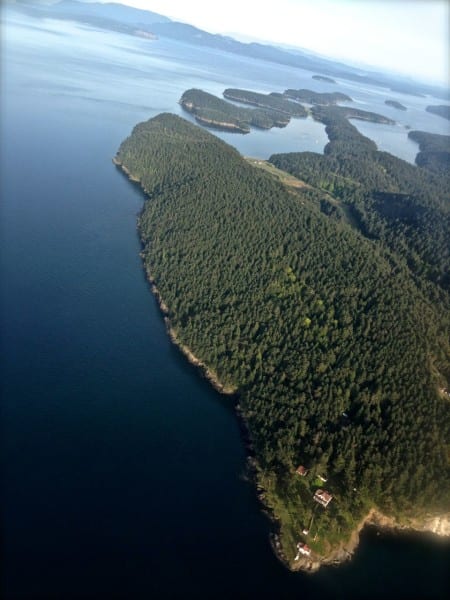 There’s a saying in Canada, “You can’t swing a cat without hitting a Fairmont Hotel.”

At least, I think it goes something like that. Which makes sense that I ended up sleeping at the Fairmont Vancouver Hotel, my 3rd Fairmont property of the day.

Where the Fairmont Pacific Rim is ultra-shiny and modern, the Fairmont Vancouver Hotel is known as the ‘Castle in the City,’ reflecting its historic stature in the center of Vancouver’s busiest shopping and commerce district. Let’s just say after flying across the country, dealing with the 90-minute long line at immigration and hopping from one Fairmont to another, I was ready to fall into bed and…. zzzzzzzzzzzzzzz.

Given the perfect weather, gorgeous surroundings and elegant day of spa & tea adventures, my relationship with Canada was off to a very promising start!

Vancouver, I’ll be back!

I was a guest of the Rocky Mountaineer and Fairmont Hotels on a recent media trip. All opinions are strictly my own.

9 thoughts on “Getting Pampered in Vancouver – The Sea, the Tea & the Spa”