After whizzing through Berlin too fast to form any sort of relationship, I was relieved to have the luxury of getting acquainted with magical Prague for a whole week as part of my Eurail-sponsored train tour of Europe.

That is, once I figured out that Prague = Praha on my Eurail train schedule. 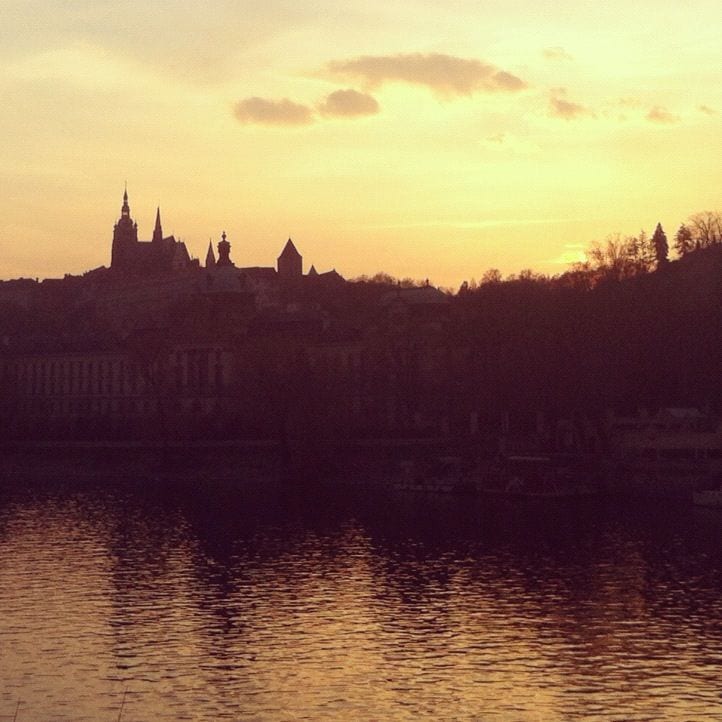 I’d never been to the Czech Republic before, but from what I saw on this first leg from Berlin to Prague, I suspected I was going to fall in love… hard. There were castles perched on hilltops and scenic rivers languishing through countryside that seemed untouched by time. Oh so dreamy and just my style.

And Prague… oh, Prague! This 1,100+-year-old city of bridges, cathedrals and clock towers did not disappoint. I spent hours and hours and hours wandering each day, mostly in pleasant early spring weather and once in winter’s last dusting of snow, and I just found it to be as picture perfect a European city as I’ve ever visited.

I was instantly charmed, head-over-heels in love at first sight.

Prague is rather compact, especially in the center, so I was able to experience it ever so slowly on foot. What a contrast to my rapid digestion of Berlin!

I enjoyed wandering the cobblestone streets so much that I completely neglected the public transportation system during my week in the historic city. And it helped that I don’t understand a single word of Czech, so hoofing it on my own two feet was surprisingly the path of least resistance during this adventure.

In the shadow of imposing Prague Castle, a 9th century structure that maintains the title of largest in Europe, Praha has flourished as a center of culture and art, from the Romanesque to Gothic to Renaissance periods. Founded in the 800s AD, Prague’s status as an influential European city has weathered many masters, as the seat of the Holy Roman Empire, capital of Bohemia, player in the Protestant Reformation & the Thirty Years’ War and a key city for the Hapsburg rulers and their Austro-Hungarian Empire.

Old Town, or Staré město, is the historic center of Prague featuring the famous Astronomical Clock and the Church of our Lady of Týn, the cathedral where I attended an incomprehensible but nevertheless lovely Easter service. Interestingly, Danish astronomer Tycho Brahe* was buried in the church in 1601.

*That may only be of interest to me since I distinctly recall writing a report on the guy in 7th grade… but there’s your fun fact for the day, just in case you’re wild about Danish astronomers.

Speaking of astronomy… atop the Astronomical Clock, you’ll find some of the best panoramic views of the city. It pays to head up there as soon as you arrive to get the lay of the land. You can see Prague Castle perched up high across the Vltava River, the Charles Bridge below and hundreds of narrow streets and alleys that look like they come straight out of a medieval fairy tale.

One of the jewels in Prague’s crown is its astronomical clock – the 3rd oldest in the world and the only one still functioning. Mounted on the southern wall of City Hall in Old Town Square, the clock has three important features:  the astronomical dial, which displays the position of the sun & the moon in the sky; “The Walk of the Apostles,” an hourly jig performed by robotic Apostles including a suitably creepy skeleton of Death who signals the time (and ostensibly reminds you that death is coming?); and a dial with representations for the months.

Crowds amass at the top of every daytime hour to watch Death & the Apostles perform their ritual. I have to admit, the spectacle itself is rather anticlimactic. The real wonder is that this clock built in 1410 is still ticking away the time.

The iconic Charles Bridge connects Old Town with Lesser Town. King Charles IV began construction in 1357 and until the 1800s, it was the only way of crossing the Vltava River without a boat. Over the years, floods and fights have ravaged the bridge, but it still remains one of Prague’s most famous landmarks.

I agree it’s certainly beautiful to photograph, but can be trying to visit, as it’s absolutely crawling with tourists and hustlers during the day.

While in Prague, I stayed at Hotel Josef, a design-focused property just a 5-minute walk from Old Town and all its medieval magic. In a place so laden with history, I was surprised to find a sleek, modern hotel — and in such an idyllic central location. And before I get carried away talking about amenities and cozy beds and whatnot, I have to say the breakfast buffet is one of the biggest and best I had in Europe. In fact, I was disappointed in the breakfast at almost every other hotel I visited during the rest of my Eurail adventure. Oh, and breakfast is served until noon! So you don’t have to haul yourself out of bed too early – something I was having trouble with in the early stages of my European adventure.

WiFi was free at Hotel Josef, which you know is of massive importance to me, and the staff was incredibly friendly and warm. The rooms are European-sized, that is to say… pretty small, but mine was clean an comfortable nonetheless. There are plenty of little details to make for a happy stay – DVD library, Aveda products, soundproof rooms, a fitness center. Definitely worth checking out if you’re heading to Praha.

Thanks to Hotel Josef & Eurail.com for helping to make my European adventure so memorable. All opinions are my own.