A couple thousand years ago, something monumental happened right here in this now parched bit of riverbed.

A revolutionary Jewish guy named John was preaching in the scrubby, dry Judean wilderness — but he wasn’t going on and on about rules and regulations and the typical religious stuff you might expect. He was earnestly trying to prepare people for the arrival of a long-awaited someone. Guess who?

The Christ. The Messiah. The Savior.

John’s message was as no-frills as his camel-hair robe & scrumptious diet of locusts and wild honey: Change your life. Straighten up. God’s kingdom (Jesus!) is here, and you need to be ready.

Folks flocked from Jordan, Jerusalem & the surrounding region of Judea to check him out. With no Kardashians or tiara-clad toddlers to detract from real news, John’s message would’ve been clear: chuck bad behavior, stop exploiting religion and start over with a whole new life.

John began to baptize people – thus, his snazzy new nickname John the Baptist came to be – at a time when personal, one-time baptism was not a part of religious tradition or requirement. At that time, the Jewish people were required to sacrifice animals to atone for sins. John’s message was the beginning of a new era where a person – Jesus – would come and take care of everyone’s sins with his own sacrifice.

The message was so new and so revolutionary, it paved the way for Jesus’ words of redemption, forgiveness and love. Judaism as everyone knew it was about to be turned on its head and Christianity was on the verge of becoming a full-fledged radical movement.

The tradition of baptism – full immersion, not sprinkling – was born in this spot at this moment, and was adopted by Christians as a symbolic way to profess allegiance to Christ.

Jesus then appeared, arriving at the Jordan River from Galilee. He wanted John to baptize him. John objected, “I’m the one who needs to be baptized, not you!”

But Jesus insisted. “Do it. God’s work, putting things right all these centuries, is coming together right now in this baptism.” So John did it.

The moment Jesus came up out of the baptismal waters, the skies opened up and he saw God’s Spirit—it looked like a dove—descending and landing on him. And along with the Spirit, a voice: “This is my Son, chosen and marked by my love, delight of my life.” 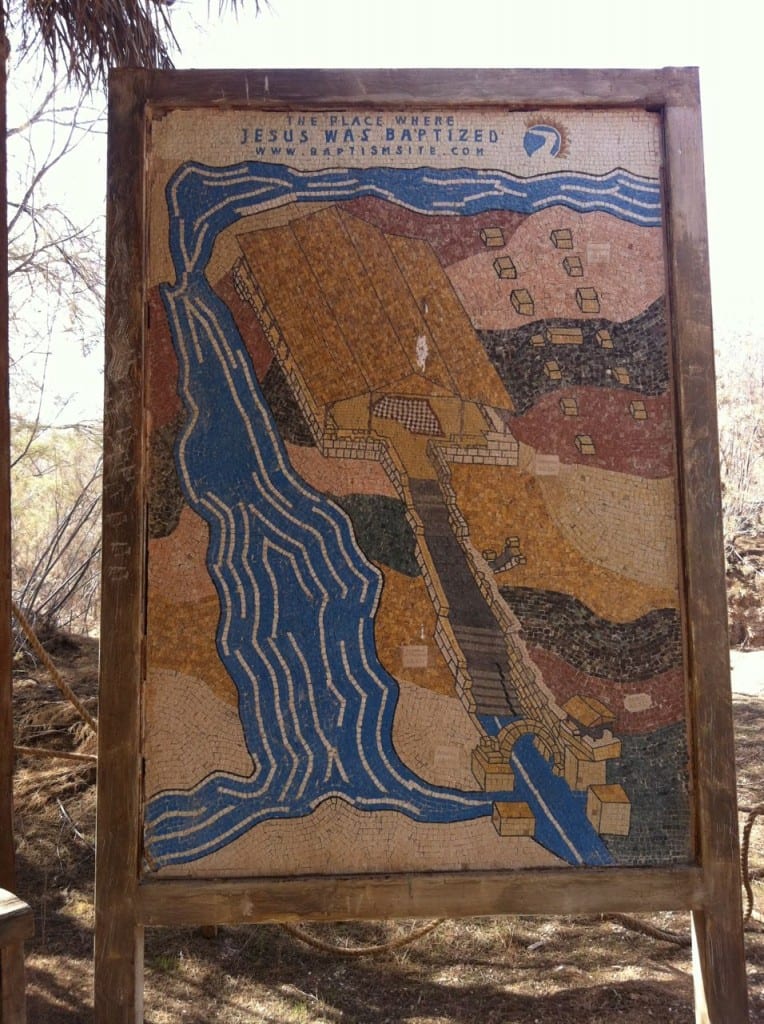 A mosaic map at Bethany Beyond The Jordan

Jordan offers more than enough historic and natural sites to attract visitors from all religious backgrounds, and that’s part of what makes it such a spectacular destination. As a Christian, I felt especially drawn to the biblical sites and Tell al-Kharrar, or Bethany beyond the Jordan, was just the first stop on a grand tour that included Mount Nebo, Jebel Haroun and Machaerus.

This wilderness blip on the Israeli-Jordan border has only experienced a renaissance as a pilgrimage site in recent years.

While most modern scholars agree that, along with the crucifixion, the baptism of Jesus is a historically verifiable event that definitely took place, not everyone agrees on the exact location where it happened. In Jordan, the dry riverbed about 50 yards from where the river flows today is said to be the most likely location for the baptism.

Regional unrest made the site virtually inaccessible for most of the 1900s, but following a UNESCO excavation begun in 1996 of five Byzantine churches commemorating Jesus’ baptism by John, this spot has been accepted by most as the real site. The presence of the ancient churches as well as the 1897 discovery of the mosaic Madaba map point to Bethany beyond the Jordan as the most plausible location for this ancient meeting of highly influential cousins.

For more background on how the experts came to this conclusion, click here.

While the Bible points us to this general area as the site, unfortunately Jesus & John didn’t check in on FourSquare so we can’t ever be 100% sure.

Come with me on a guided tour! (And please forgive the bad hair. Too much Dead Sea mud?)

Visiting Bethany beyond the Jordan

Since there’s no water at the officially designated baptism spot, you can follow the path down to the Jordan River like I did. Down at the river, you can dip a toe (or get baptized, of course) in the muddy Jordan all by yourself while hundreds of others do the same just a few yards across on Israel’s West Bank.

Surprisingly, the river wasn’t at all the mighty stream I’d imagined. Instead, with its waters siphoned off by Israel and Jordan upstream, the river is now little more than a creek, 130 miles long as a fish would swim it but only 65 miles from the Sea of Galilee where it begins to the Dead Sea where it empties. It’s anywhere from 2-10 feet deep and about 30 yards across on average, though it’s much narrower than that where I stood.

Only an hour from Amman and perhaps 20 minutes from the resorts on the Dead Sea, the site is easy to access — once you cross through several checkpoints and a carefully mapped road in the wilderness. I confess the presence of armed military on either side of the Jordan was disconcerting at first, but I suppose in the name of security it must be so.

I appreciated very much that Jordan had not over-commercialized its side of the river to capitalize on Christian visitors — something I found appalling and annoying at times once I made my way to Israel a few weeks later.

Bethany beyond the Jordan is definitely a site worth seeing and a message worth reflecting on – for believers and non-believers alike.

Thanks to the Jordan Tourism Board for helping me walk in the footsteps of Jesus.

11 thoughts on “Bethany Beyond The Jordan | Is It Really The Baptism Site Of Jesus?”