Believe it or not, while the Great Pyramid in Giza is the only survivor of the 7 Ancient Wonders of the World, it’s not even the oldest pyramid in Egypt.

Immediately after visiting the Giza necropolis, including the trifecta of massive pyramids and the Sphinx who guards them, we hopped back in our magnificently air-conditioned bus, I took a nap, and we drove south to the home of the very old Djoser Step Pyramid in Saqqara. 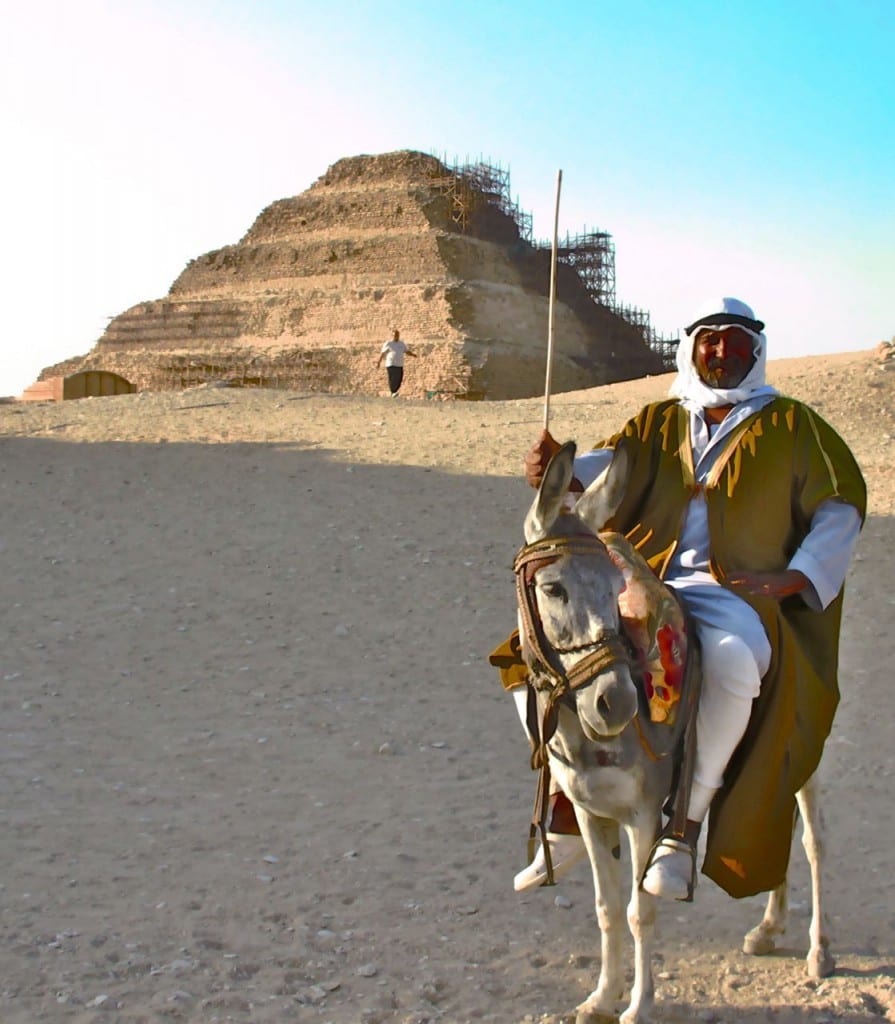 Egypt’s first pyramid was built by Imhotep, the vizier of 3rd dynasty Pharaoh Djoser, around 2630 BC. (The word vizier just makes me think of Jafar from Aladdin. Anyone else?) It was intended to be Djoser’s tomb and not surprisingly, was the largest building of its time, standing at 204 feet. 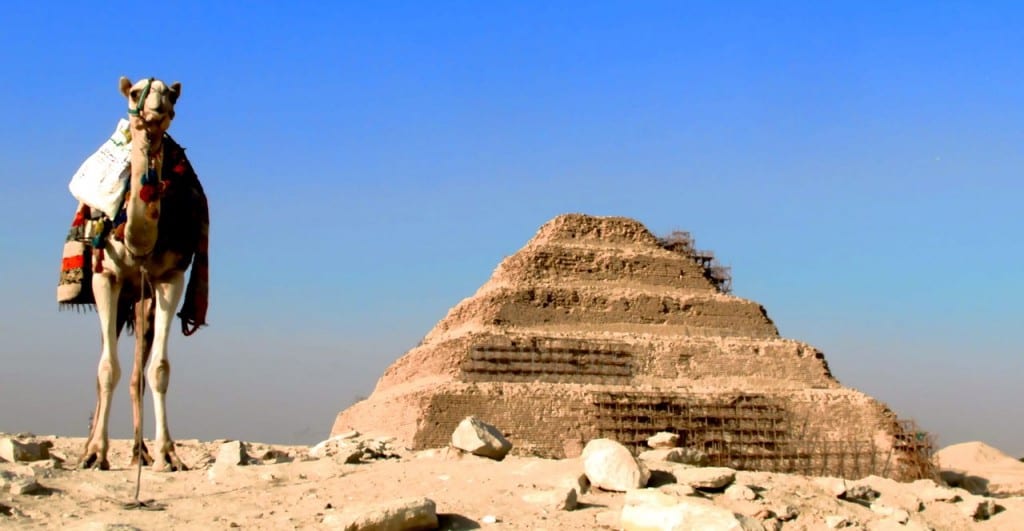 I could give you heaps more information on Djoser’s lovely death hut, but I’ll leave you and Wikipedia to sort all that out. There are only so many pyramids a gal can digest in one day, and this being the fourth large one,

my mind and camera lens quickly drifted from past to present tense. 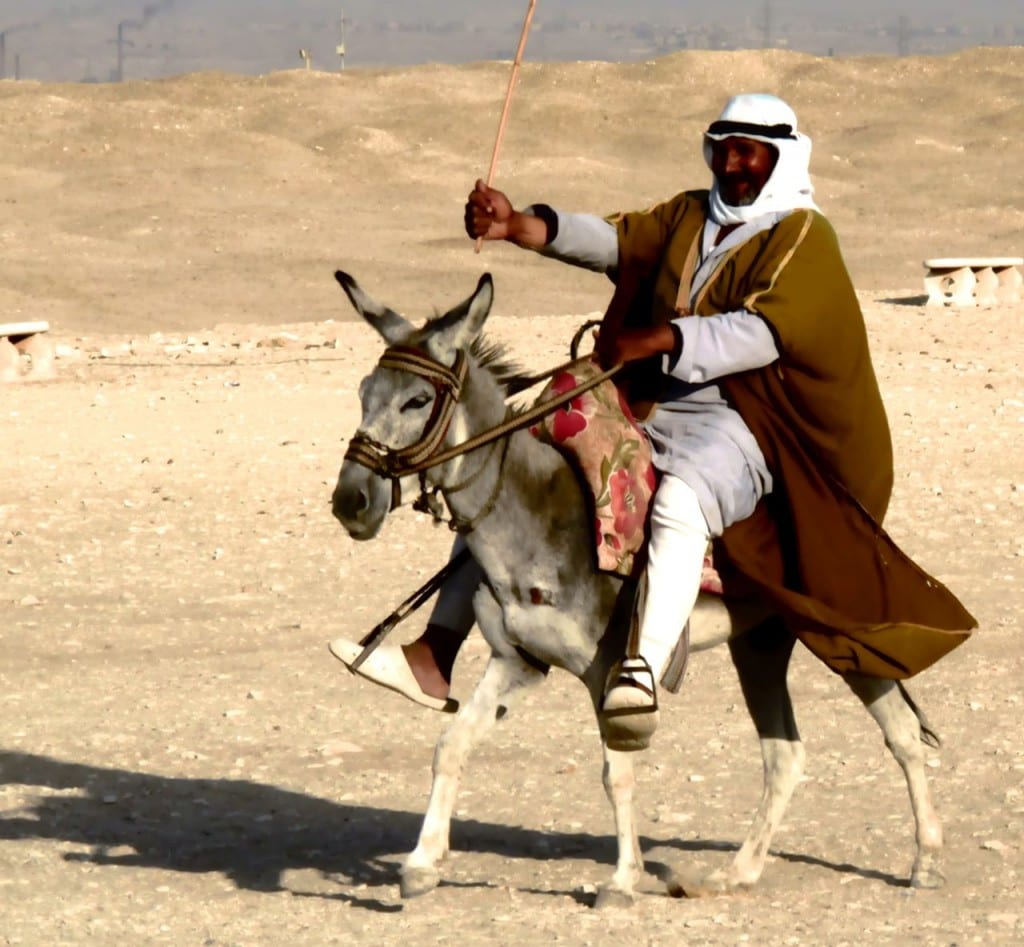 There he goes again!

Even though the Giza pyramids had fewer visitors than normal, the Saqqara pyramid necropolis was totally dead. (Get it? Come on. You laughed.) At most I think there were a dozen tourists there aside from my bus full of brand new On The Go best friends. Once I took a couple of shots of the main attraction, I gave in to my desert-and-pyramid fatigue and started shooting the pictures and the breeze with some of the touts working the area.

Now, I know what I said in my Tips for Visiting the Pyramids post a few days ago – no eye contact, no small talk, etc.

Contrary to most other tourist hotspots we visited, I found that the touts at the Saqqara pyramid were somewhat less aggressive than the ones we’d encountered at Giza, and they were endlessly entertaining. From the guy on the donkey who said, “I love America! Welcome to Egypt! Take a picture!” while whizzing around the site, or the cowboy above who followed me for 15 minutes trying to give me postcards for free, I found Djoser’s touts much more charming than threatening. My favorite interaction: I ended up bargaining with one who couldn’t have been more than 16 years old in English, French & Spanish, and I think we both enjoyed the negotiation practice!

“Welcome to Djoser’s Saqqara Pyramid. You are very welcome!”

“The Smoking Ghost of Djoser”

After Saqqara, we went to a papyrus museum, which was a boring, tedious thing to do after a bucket list-busting day of camel-trekking across the desert and witnessing ancient history come alive all day long. If the Great Pyramid and the random papyrus museum were pitted against each other in a pharaoh-sponsored cage match – well, you know who wins that smack down in my book. 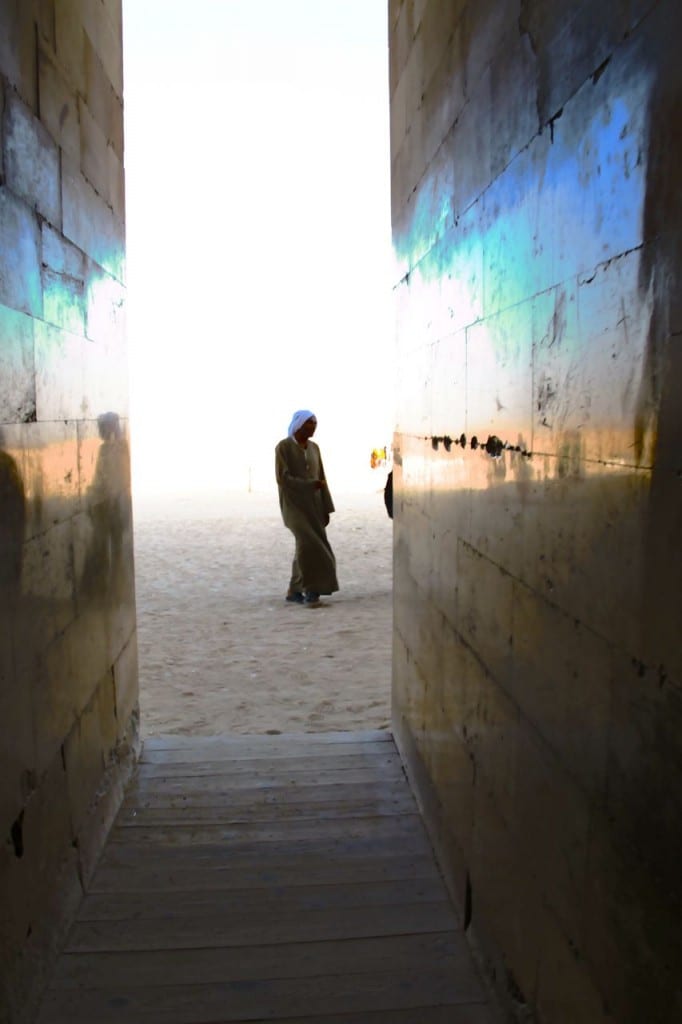 A shot from inside the Saqqara pyramid passageway

With a perfect day behind me, it was time to focus on the next leg of the journey. I knew we were in for a long and possibly sleepless evening on the overnight train to Aswan, so I snagged another nap on the bus, showered super fast back at the hotel, attempted to swim in the pool but settled for a dip in the fountain (shh don’t tell), ate a very strange carbohydrate concoction of noodles, rice, potatoes and couscous (maybe!), and popped over to the Cairo train station to await our several-hours late ride to Aswan.

It wasn’t until we arrived at the train station that we began to hear about that day’s protest that killed dozens of people.

I’m so grateful that I was with a group and not wandering about on my own during this time.

Read more about the Oct. 9 violence:

4 thoughts on “The Touts of Djoser’s Saqqara Pyramid”