Aside from my posh stay at The Sky Tower at Lebua in Bangkok, Thailand and I got off to a rocky start. First I paid $20 for a Gatorade at the airport, so I was a bit cranky at being taken advantage of in my 3 a.m. jetlagged haze. (Though it’s not my first currency debacle… there will be a dedicated post about that one of these days!) Then I gave myself a guilt trip about not getting out and seeing Bangkok because I was too busy working on new projects… wahhh.

Things began to look up on Monday morning when I arrived at the Stray Travel Asia office and met fellow traveler Amber and our pocket-sized Russian tour guide Anna.  It was just the three of us heading toward the ancient city of Sukhothai, and since it was the beginning of the annual Songkran holiday in Thailand, we had to take public buses instead of the usual trains. Even though we had Anna helping out, finding the right bus at the madhouse station was a ludicrous ordeal. It was my first taste of being “yessed” to death in Thailand, and I was so frustrated. We asked no fewer than four bus drivers if theirs was the bus to Sukhothai. And they all said yes. As you can imagine, only one of them was right. There’s no signage, at least in English, and we wandered around asking questions until we eventually ended up in the right spot. Thank goodness I had veteran Thailand traveler Amber & tour guide Anna with me – there is absolutely no way I would’ve been able to sort it out on my own in my haze.

The six hour journey somehow turned into eight as we hurtled (presumably – I was never quite sure we were going the right way until we arrived) toward Sukhothai. I drifted in and out of sleep while Anna & Amber laughed at me for bringing my own blankie. We eventually arrived at the Sukhothai bus station and Anna negotiated a tuk-tuk (my first one!) to take us to colorful PinPao Guesthouse, where we dropped off luggage and went for a swim in the pool.

Afterward, we hit up the night market (my first one!) where we nibbled on dirt cheap bites from the different vendors. I don’t have a clue what I ate that night, though I promptly stopped snacking when I passed the cart of bugs. Call me an uncultured swine, but I’m of the opinion that restaurants should be shut down if insects are present. I had to avert my eyes (and move quickly away from the cart) due to the grilled presence of a certain creature that haunts me everywhere I go. (Post about that neuroses and how it affects my traveling to come at a later date.)

I’ll do a lot of adventurous things in my travels. But eating bugs is not one of them.

The night wore on and my mega jetlag lingered, far worse than I’ve ever experienced. Anna & Amber gabbed excitedly while I mindlessly followed behind. I ate what they gave me and nodded at appropriate moments during conversations I could only half comprehend. Later at dinner, when I fell asleep while talking, we decided to call it an early night.

The next morning after sampling a baggie of fried bananas Amber bought from a roadside vendor, I found out to my horror that the only way to see ancient Sukhothai was via bicycle. Since I’d just replaced my Canon G12 following the Bali bike incident, I wasn’t too keen to get behind the wheel again. But guess what? In 90 minutes of riding, I didn’t fall off. Not even once! (Admittedly, there were no village chickens or rabid dogs around to stress me out.)

Up next… Chiang Mai for Songkran

The Jerash Ruins | A Guide to Jordan’s Best Kept Secret 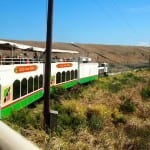 All Aboard the St. Kitts Scenic Railway!