One of the best parts of my mission trips to Bolivia was experiencing church the way the locals do. I remember trying to understand the sermon in Spanish, but technically only catching every third word and being a little frustrated at first. Once I stopped trying to translate and just listened for God, I was able to comprehend what Pastor Dilmar was preaching.

And if the sermon reminded me that we’re all in the same boat, from Bolivia to NYC, worshipping God together brought me to my knees in awe. We were singing different words to the same song, but all to the same wonderful person. Since that first trip, it’s always been important to me to attend church when traveling if I possibly can. Now that I’m traveling around the world, I’ll be writing about the various churches I visit. Whether you’re a Christian or not, I hope you enjoy!

Sometimes even if you try really hard, stuff gets in the way of going to church. Brad’s family was so sweet to take me out to Healesville Sanctuary on Sunday morning to see the koalas, and though we made every effort to get back in time for the evening service at Mentone Baptist Church, due to flash floods, the easy road home was impassable. We ended up missing church by about 30 minutes.

I was super disappointed that we didn’t make it in time. Luckily, I had a backup plan! We went home and listened to a podcast sermon from one of my favorite pastors in the whole world, Andy Stanley. I attended Andy’s church when I lived in Atlanta, and though I loved the city, the only aspect of moving to NYC that gave me pause was knowing I would have to leave Buckhead Church.

I had a few podcasts (ok, like 60) to choose from, but in the end I went with “How Good is Good Enough.” I love how Andy practically explains why just being “a good person” isn’t going to get anyone into heaven. If that’s the sort of religion you ascribe to, give this podcast a listen. There are some very reasonable, rational, practical points there – not your average “just believe in X because I say it’s right” message.

In my chats with friends in Australia, I found out that 60 percent of Aussies have never knowingly met a Christian. As a Christian, of course I find this incredibly sad… on the other hand, it is a lot easier to talk about my faith with folks who haven’t formed misconceptions about what Christians are like based on their portrayal in the media (or even their actual behavior – Christians aren’t perfect!).

In the U.S., if I meet a new friend and mention that I’m a Christian, immediately they begin to develop a picture of what I must be like based on those they’ve known before. Regrettably, there are so many hateful factions and individuals claiming to be Christians in the U.S., I can’t blame people for thinking I might be a jerk, too.

Being a Christian is supposed to be about acting like Jesus Christ. If you have met Christians in the past who have hurt your feelings, cursed at you, cut you off in traffic or just sucked in general, can I encourage you to go to the source? Find out who Jesus was. That’s what we’re supposed to be striving for… even if we mess it up. (In a nutshell, Jesus wasn’t a hate-spewing, violent, angry, rude man. So if you know a Christian who is like that, maybe they didn’t get the message about who Jesus is.)

I loved telling my Aussie mates about my faith. It was such a relief to just come out and say what I believe in without feeling the repercussions of others’ behavior before me.  What a precious gift!

The next Sunday, we finally did make it to the morning service at Mentone Baptist Church. I’ve never met such a welcoming congregation! We chatted with several folks before the music started, and afterward several more people came up to us just to say hello. 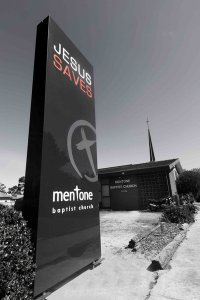 The sermon was about Zaccheus. I love Zaccheus because we have two important things in common. First, we’re both short. The day Jesus came by, Zaccheus had to climb up a tree to see him over the crowd. I’ve been there before. Well, not in the same town as Jesus… but trying to climb up higher so I could see over all the tall people.

Second, Zaccheus was a tax collector. Back in the day, most people looked down their noses on tax collectors – it wasn’t a terribly honest or noble profession. If you’ve ever seen Thank You For Smoking or any movie where publicists are made to look like slimy, dishonest creeps who spin spin spin but never tell a sliver of truth, then you’ll understand why I relate to Zaccheus.

When Jesus reached the tree where Zaccheus was perched, he said, Come on down, little guy. I’m coming to your place for dinner. The crowd could not believe Jesus would associate with a lowly, creepy tax collector.

But that’s what makes Jesus so great… and so different than we as Christians have been portraying him. He came to seek and save the lost, not to have fancy dinners with all the flawless, well-behaved, respected, law abiding citizens. He came to find the busted-up, dishonest, disrespected, imperfect, weasely tax collectors (or publicists!) and to give them grace, mercy, love and ultimately salvation.

If the Christians you know have hurt your feelings or been rude at the grocery store or snarky at the PTA meeting, then I apologize on their behalf. Sometimes, like the murmuring crowd who judged Jesus for hanging with Zaccheus, they just can’t see past the end of their noses.

Check out the whole story here.