Rachel here with an enormous life update – it’s been a little while, hasn’t it? If you’ve been following along on Instagram or our monthly email, you already know – Ben and I are engaged! And yes, it was a surprise proposal in Paris complete with a professional photographer and the Eiffel Tower in the background. SWOON! 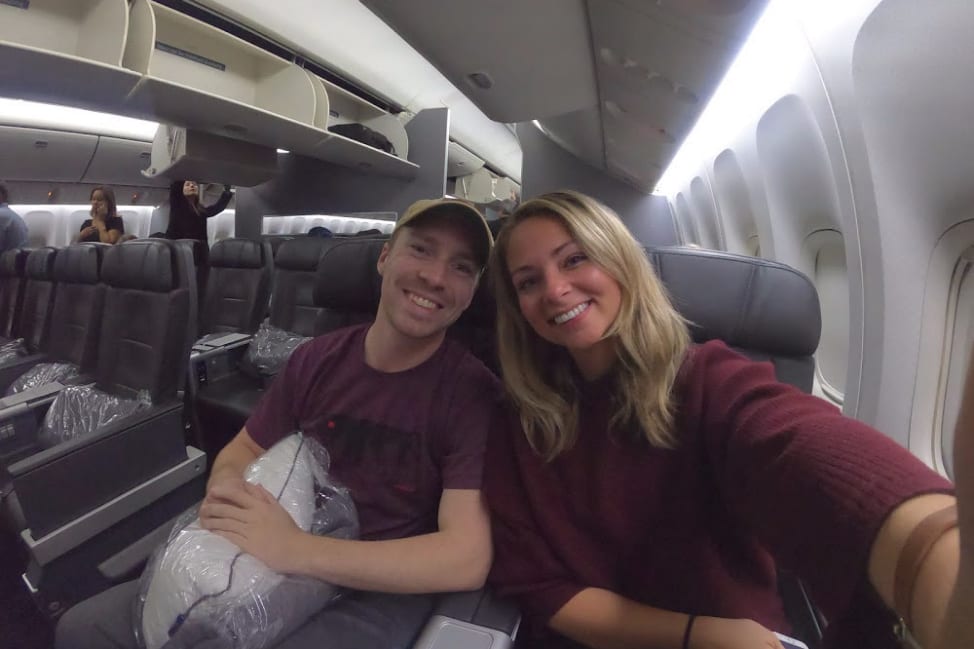 A Proposal in Paris

Ben and I had both been to Paris before and did all the touristy things, so for this trip, we didn’t plan a big involved itinerary. Mostly we wanted to wander up and down the streets, drinking wine and eating everything from the patisserie.

Our first day in the City of Lights was low-key by necessity. There was a serious transportation strike, so big protests and demonstrations began the same day we arrived. Our Airbnb host said it would be safer for us if we stayed inside on our first day. Bad news on a normal trip, but it gave us a great excuse to sleep off the long flight from Orlando.

5 Ways to Have a Whirlwind Adventure in London

Winter in Paris: A Style And Planning Guide

Ben said he wanted to wake up early the next day and take photos on the Pont de Bir-Hakeim, a bridge near the Eiffel Tower at sunrise. Sunrise is not my ideal time of day for exploring, but his buddy had just been to Paris and said it was a great spot to see the Eiffel Tower. I was a little suspicious that he was up to something, but he was so chill, I didn’t think it could be something as epic as a proposal.

We booked this Airbnb months ago thinking we could save money staying outside the city center and just take the efficient Paris Metro in and out. But because of the strike, there were no trains running. And because no one could use the trains, it was impossible to get a taxi. It took more than 40 minutes to get an Uber that morning and the traffic was horrendous. By the time we finally arrived at the bridge, we’d missed sunrise. Things were not going well and I was strongly considering going back to bed. (Want $55 off your Paris Airbnb? Use this link!)

Pont de Bir-Hakeim wasn’t too busy at that time. There were just a few folks here and there taking photos, but mostly people rushing to to work. We were about 30 feet away from a man with a nice camera taking photos of the Eiffel Tower when Ben said, “Hey, that guy looks like he knows what he’s doing, let’s ask him to take a photo of us.”

Ben walked up and said to the man, “Do you speak English? Will you take our photo?” This isn’t terribly suspicious because Ben is known for making friends with any and everybody he meets. He’s one of those guys who has never met a stranger.

Of course, the man said yes and took this photo with Ben’s phone: 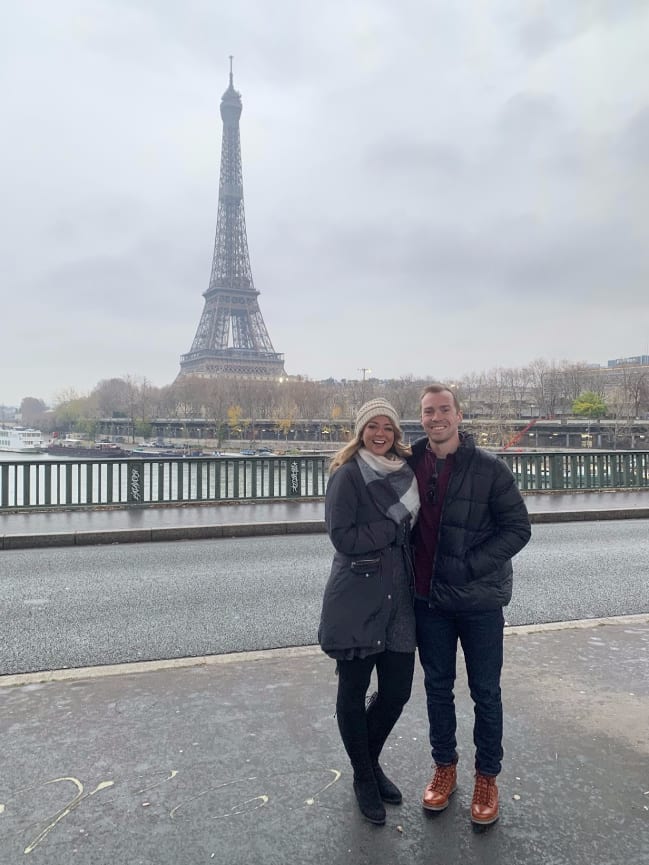 Then he handed the phone back to Ben and started backing up while taking photos with his fancy camera.

Ben looked at me all starry eyed and said, “Hey, while we’re here…” And then he dropped down on one knee and said a ton of romantic stuff I really can’t remember because I’m pretty sure I blacked out.

“Will you marry me?” 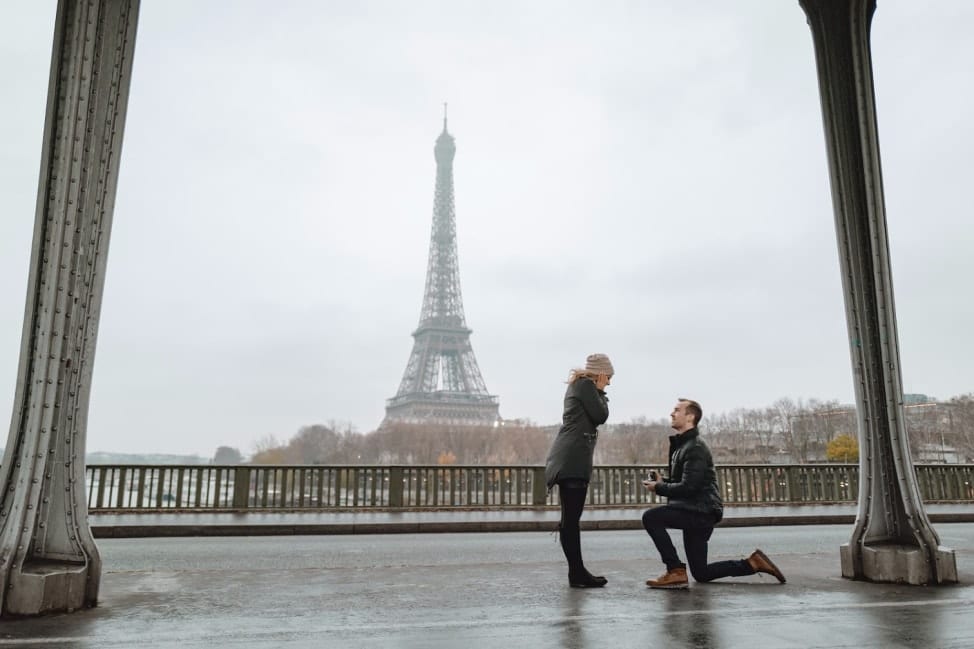 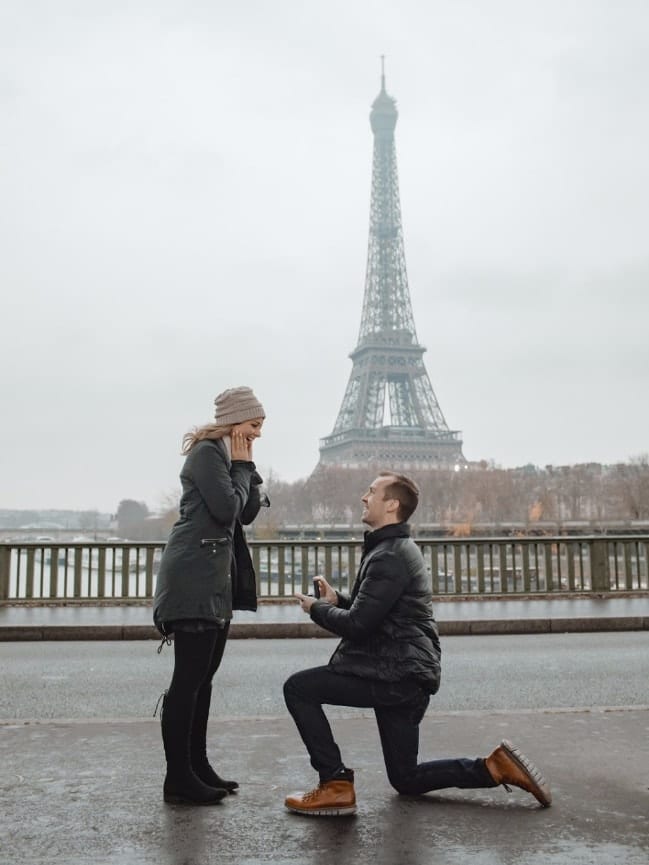 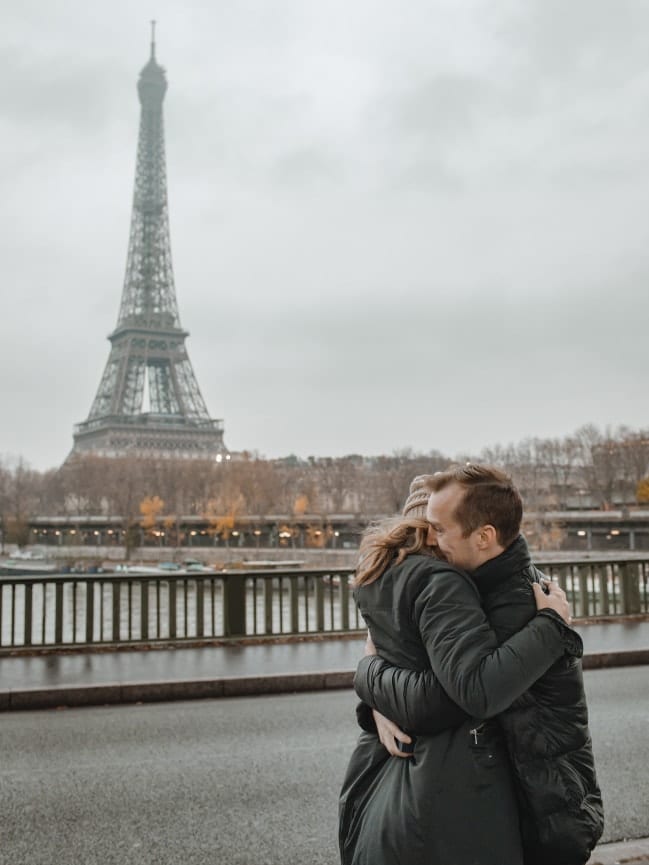 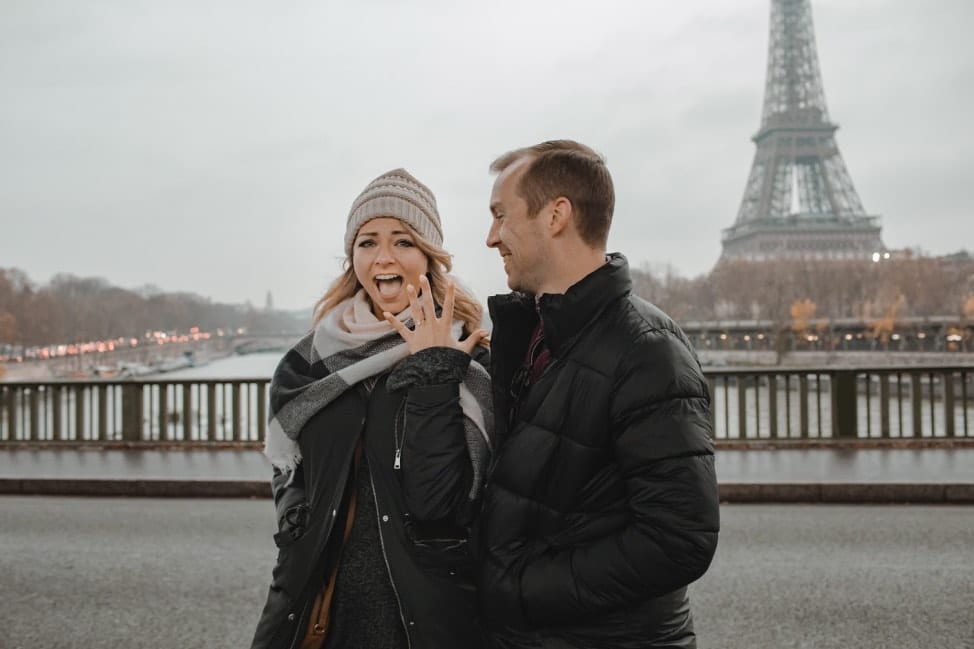 I was so curious how he planned it all without me knowing and I had a million questions. Did you ask my dad? When did you buy the ring? Are you sure you want to marry me?! How did you find this great photographer in Paris?!

Booking a Photographer in Paris

As for the photographer, a few weeks prior he reached out to Flytographer to help with the proposal in Paris. They have photographers in hundreds of locations around the world that anyone can hire while traveling, whether for a surprise proposal, a fun family photoshoot or a bachelorette party. (Coming soon…) You might remember Angie and Rick used them during their trip to London a few years ago.

For weeks, Ben texted with Kirill, our photographer, discussing different locations, times of day and all the details to make the surprise proposal extra special.

After I said heck yes, we instantly went into full photoshoot mode. Kirill took us to a few different spots around the Eiffel Tower and snapped away. An impromptu professional photoshoot in Paris? I was LIVING for it.

Ben whispered, “So, can this count as our engagement photoshoot?” 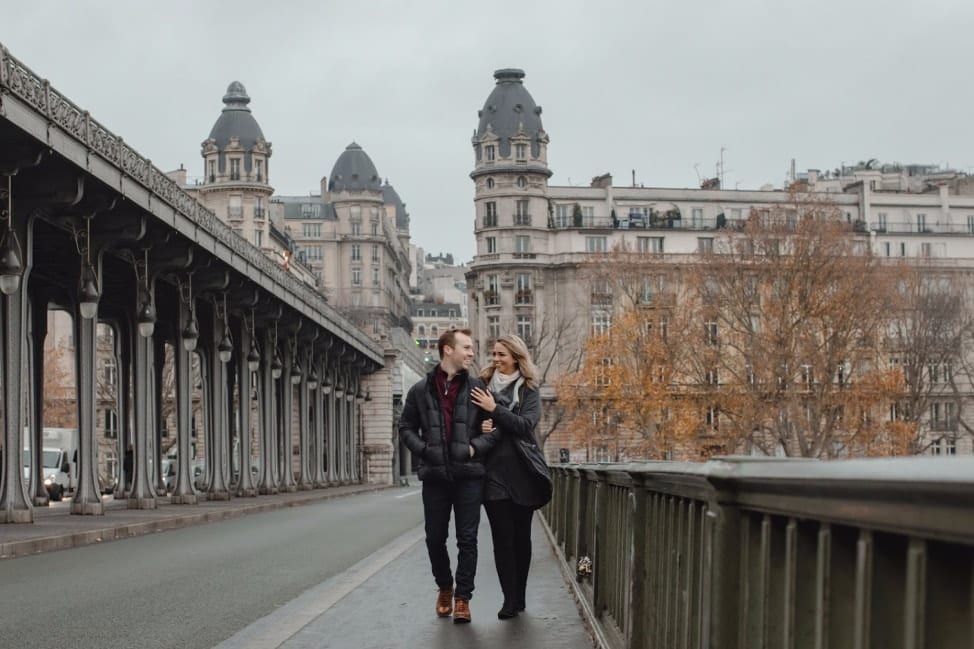 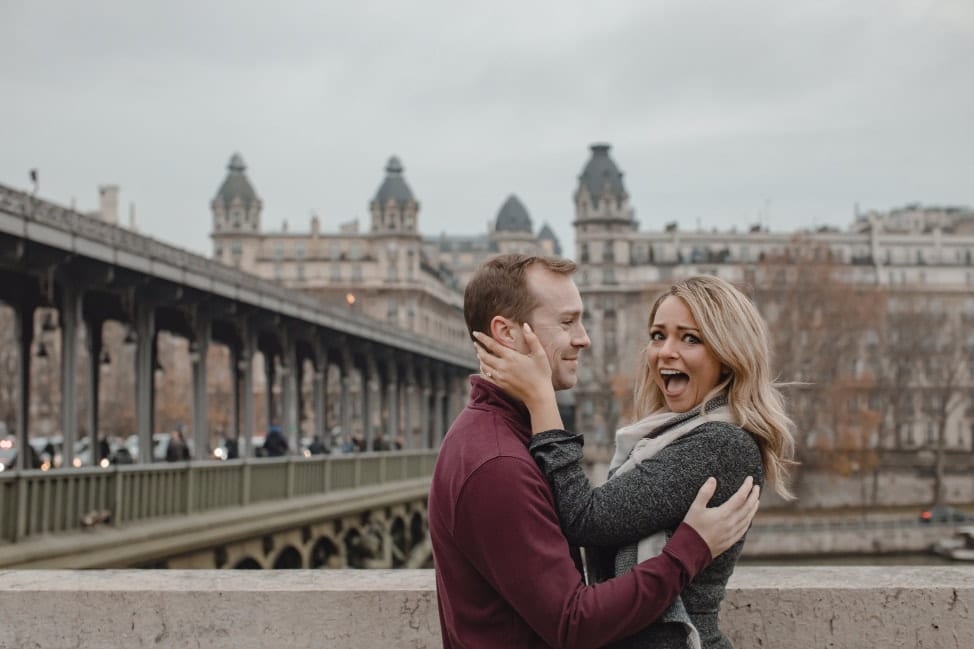 So that’s the story of how Ben planned an epic surprise proposal in Paris that I really didn’t see coming. Can you believe we’re engaged?!

If you’re planning a proposal in Paris, or anywhere else in the world, book a Flytographer quick because they book up fast!

How Much Does a Flytographer Proposal Session Cost?

Flytographer offers its services from Amsterdam to Zihuatanejo starting at as little as $250. For 30 minutes and one location, the cost is $250. For two hours with multiple locations, the price goes up to $650. For reference, Ben booked Kirill for the hour session for $350, which includes 30 photos and a couple of locations.  And if you book a session using this link or CODE67210, you get $25 off your first session. 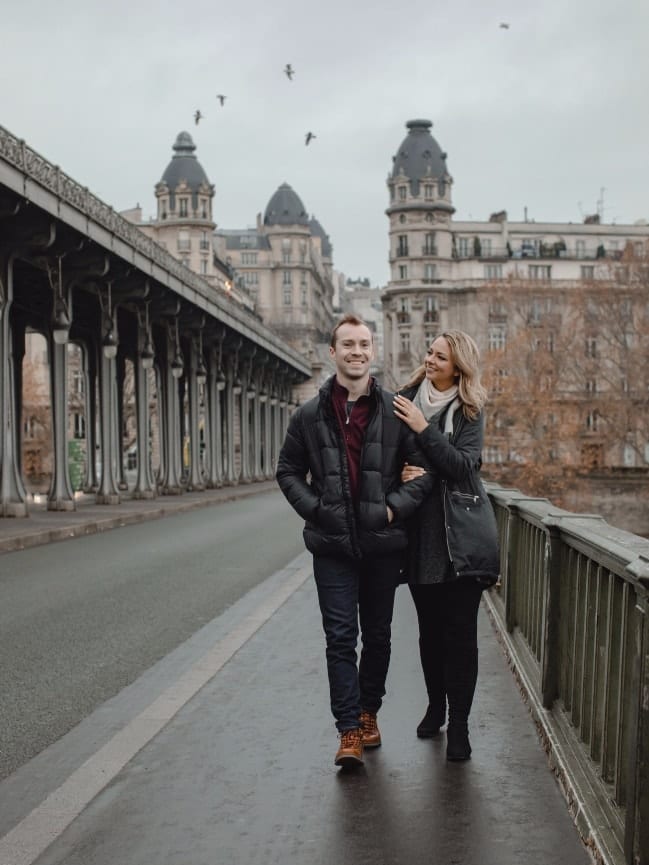 Like millions of other Millennials, we met online. Our love story started with the dating app, Bumble. I had used Bumble before and met a few duds, so I was not super confident in the process. I matched with a few guys, chatted with them, but didn’t have any real connections. There was one guy I had a good feeling about though. The guy whose profile said, “Kung Fu Panda is my favorite movie.”

He was cute and funny. Could he be real? He asked me out to dinner, and of course, I spent hours getting ready.

It started raining the moment I left the house. Of course. Hello, frizzy hair. Then, I accidentally parked in a mud puddle and ran through the rain into the restaurant where Ben was waiting.

My first thoughts, “Okay, so he’s definitely a real person.” My second thought, “And he’s a real cute person, too.” Okay, Rachel, bring your A game.

I STEPPED IN A PUDDLE. 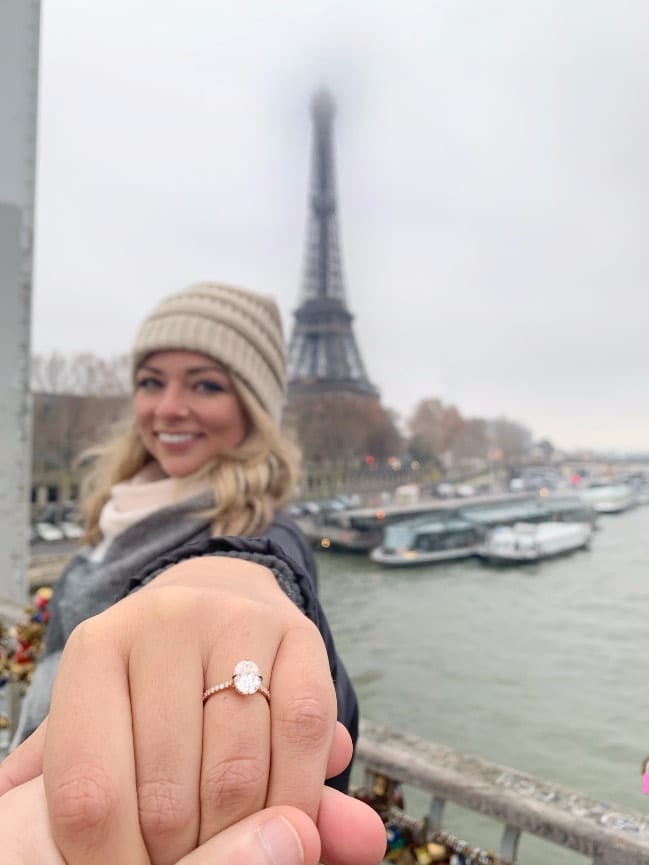 Somehow even though I basically shouted about a puddle and sat through dinner with muddy feet, he wanted to see me again. And again. And now forever.

Everyone, welcome Ben to the family!

Do you have a fun, funny or super romantic proposal story? Tell us in the comments!

12 thoughts on “We’re Engaged! My Surprise Proposal in Paris”